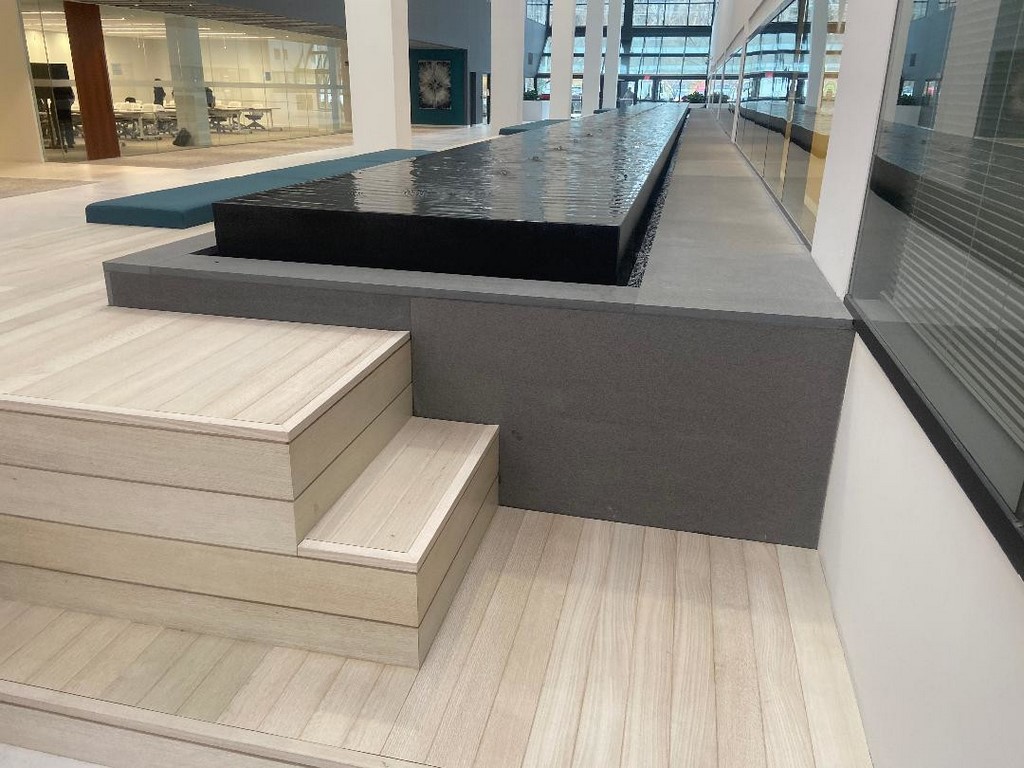 As a company that’s been around for many years in the landscape and pool trades, we knew as we expanded our offerings to include fountain restoration, design and installation that experience and contacts would eventually lead to referrals. What’s been unexpected given our past work with mainly residential clients is that fact that our fountain referrals have come in bunches as we work with developers and architects and get involved in multiple projects with them.

The fountain under discussion here is a perfect example of this pattern: We had worked with the architect on a triangular fountain we covered in a previous WaterShapes article (click here). He was now involved with different clients, this time representing one of the largest commercial-property owners in the Philadelphia region.

The atrium in one of their buildings had a 25-year-old fountain that needed serious updating, and the architect thought we were a good fit for the job. He had a basic concept that had been through a round of revisions by the time we were brought in to comment. We gave our input and, back in our shop, developed three-dimensional models to bring more substance to the ongoing discussions.

No budget had been set at that point, but the client committed to using us for the project and we started working directly with the architect to figure out the pricing and nail down a variety of details. In no time at all, we were totally engaged in fountain development and fabrication.

The space is big, and in making changes to this grand financial-services center just outside Philadelphia in Radnor, Pa., the architect and client wanted to infuse the atrium with a campus-like atmosphere. This was to be more than a place for just moving toward the elevators or breaktime and lunchtime socializing: It was also meant to serve as a nice place to step away from the office and do some thinking or even some work near water – a Silicon Valley-style approach to creating a more convivial workplace.

We at Outerspaces (Glen Mill, Pa.) weren’t so caught up in the philosophy behind the new arrangement, but we were more than happy to tackle what turned out to be a five-foot-wide, 90-foot-long, full-perimeter overflow fountain with bubbling jets placed at regular intervals to introduce additional sound.

As might be expected with a fully occupied, decades-old building, we knew that active construction would need to happen in a hurry. We also knew that, as in any renovation, it’s hard to know exactly what you’ll find when you peel back layers of old construction. Finally, we knew that the pump room and surge tanks for the proposed waterfeature would be a considerable distance away from and below the fountain deck. The consequence of all this is that we placed our emphasis on meticulous planning, system modularity and development of the tools and transfer systems we’d need to get in and out of the atrium as efficiently as possible.

Back in our fabrication studio, we developed shop drawings and hired a local steel supplier to send us precision-cut components for the framework we’d developed. We assembled ten of these frames into a mockup for the architect’s review. He signed off and we geared up to prepare the 90 units we needed for the nine ten-foot-long modules we’d ultimately be installing.

Each ten-foot module has a five-foot-wide, six-inch-deep tray/basin within which a pair of five-foot-square, two-inch-thick black-granite slabs would be placed near the top. Each basin is also flanked by six-inch-wide, stone-lined gutters with a four-inch ledge toward the atrium and a two-inch ledge toward the back wall – meaning the whole assembly was whisker shy of the seven-foot doorway that gave us access to the space. 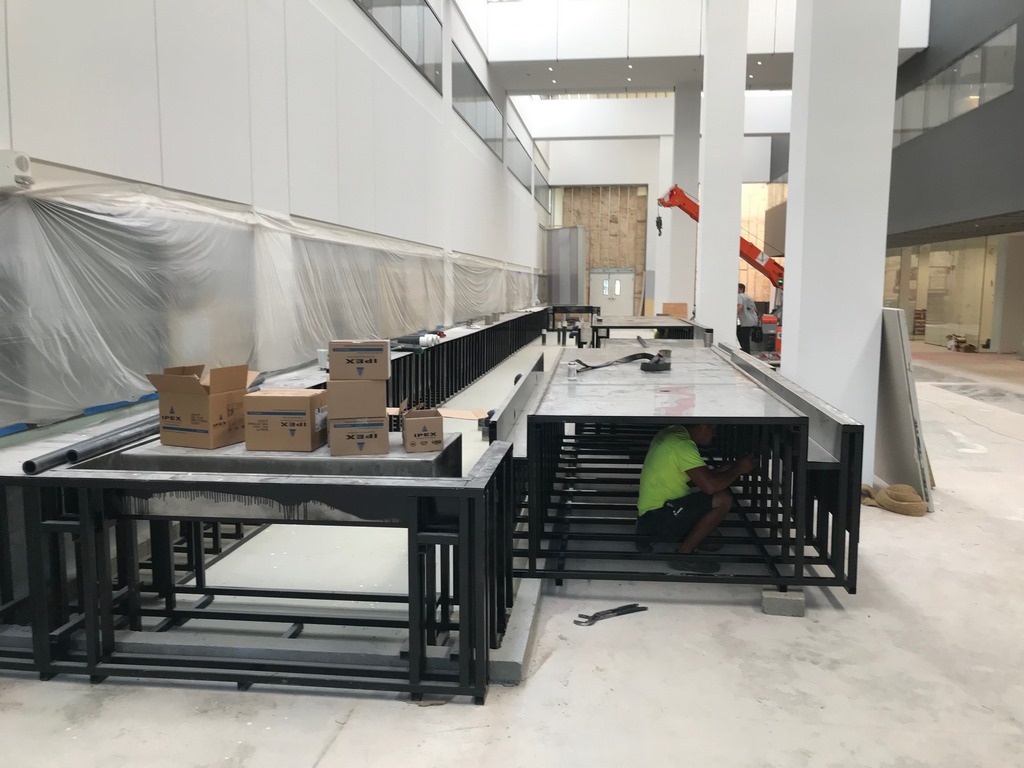 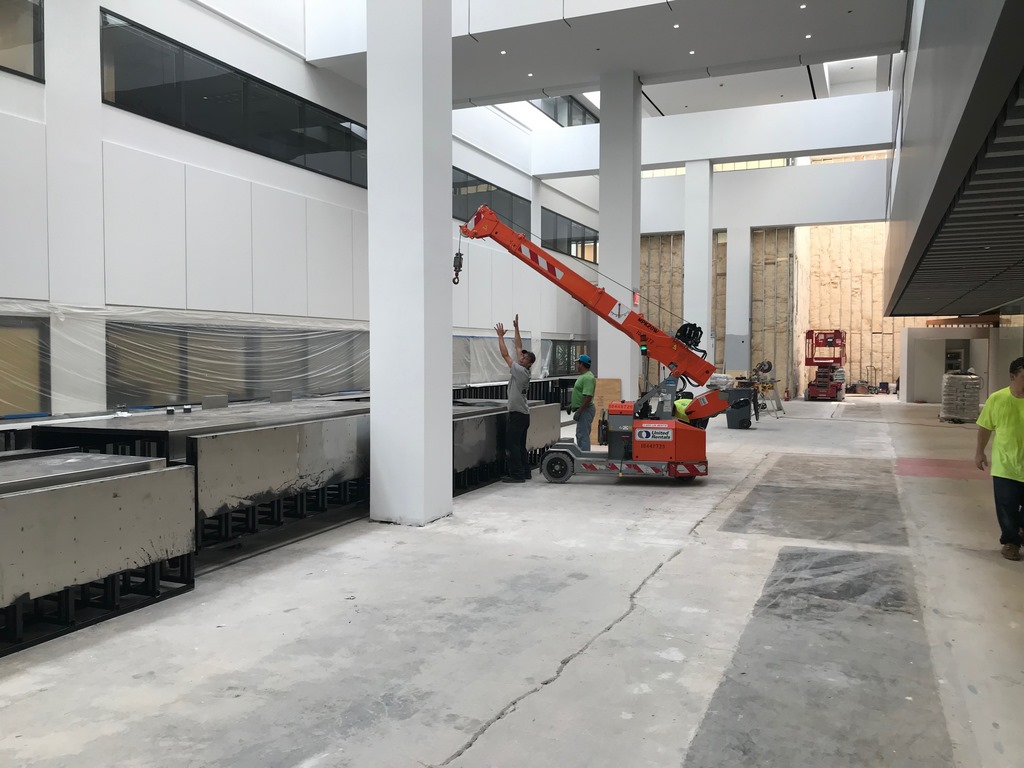 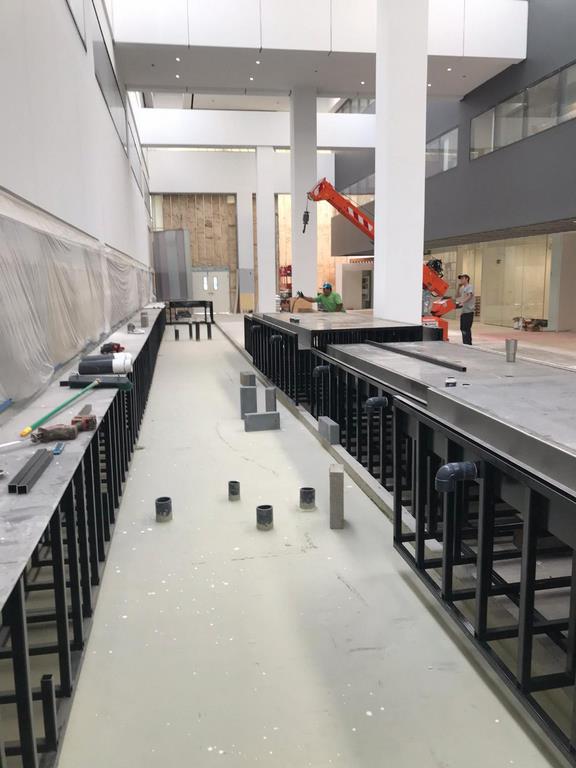 As part of our development process, we realized we had to custom-craft a cart to move the modules into place. Every fraction of an inch came into our calculations: We had to allow for the height of the sill plate in the doorway, for example, because we didn’t want the cart to bottom out as we moved the 2,000-pound modules into the atrium.

We had a similar issue in working with the black-granite slabs, which weighed about 450 pounds each. In this case, we built a custom transfer cart at exactly the height of the basin’s edge so we could slide the slabs into place across what was essentially a level surface.

As these pieces of equipment were being fabricated, we assembled the 90 frames we needed, every single one of them as identical to the others as we could make them, and ordered all of the connective struts we needed to weld the frames together as complete modules. None of the plumbing was inserted at this point, but we precut penetrations for the trough’s drainage system and for the bubblers.

This shop work took about two months in all. As this fabrication process moved along, we made ready to start on site with some pre-plumbing of the drainage system from the fountain level down to a parking garage and then across to the pump room.

We started on site by placing a curb around the full perimeter of the fountain base, waterproofing it to create a drainable “bathtub” in the event any leaks appeared during assembly and testing. No leaks ever developed, but the pan we created is still a useful insurance policy for the long haul.

As we expected, when the old fountain and the atrium’s flooring were removed, we observed that there was little about the space that could be called “level.” We’d known that was coming, so we’d set things up in a way that we could individually shim modules up to the right level – by as much as four inches in some places – and create a true perimeter overflow around all 190 feet of the basin’s edge.

We began by installing two-foot-wide backing units that separated the fountain modules from the existing wall and was to be covered with stone decking. (This was our method for addressing any quirks in the wall’s contours relative to the precise line of the fountain basin.) Getting these smaller units inside the building was a snap, of course, but it served as something of a rehearsal for how we’d handle the larger units we’d be bringing over soon thereafter.

We had set aside a whole day to take care of the module transfers, but we nailed the logistics so completely that it took just a couple hours: The cart worked perfectly, and with the assistance of a small electric crane, we soon had all of the modules lined up and ready to go – a process speeded by our anticipation of the leveling issues and the easy placement of shims.

Once the modules were in place and leveled, we tested the system for water-tightness. Finding no leaks, we tack-welded the modules together and then hand-packed non-shrink grout under the steel structure for permanent support. We checked the level again: Still spot on! 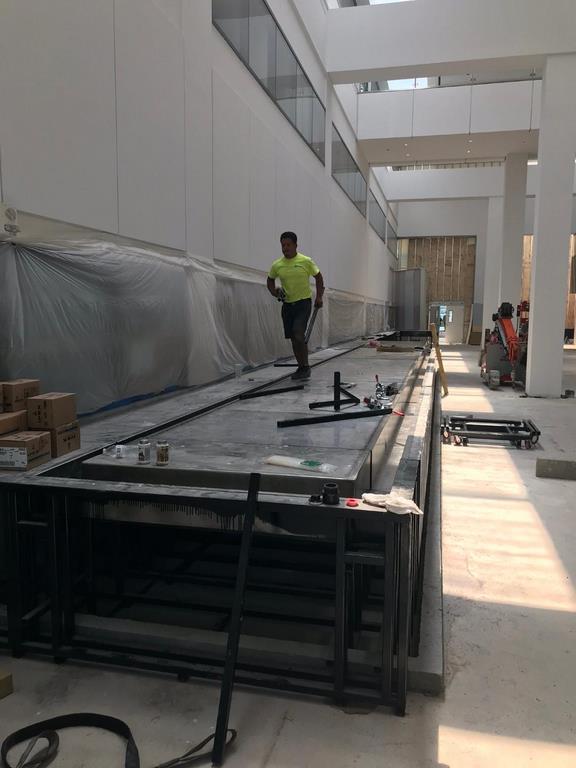 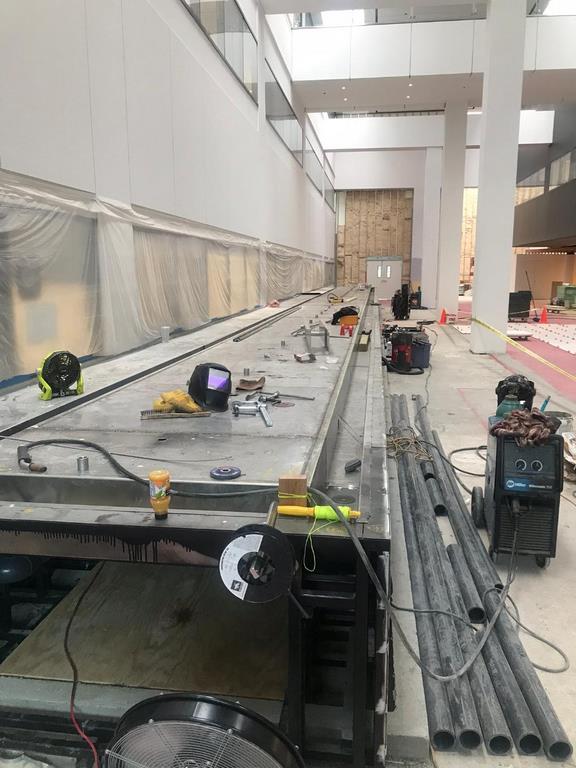 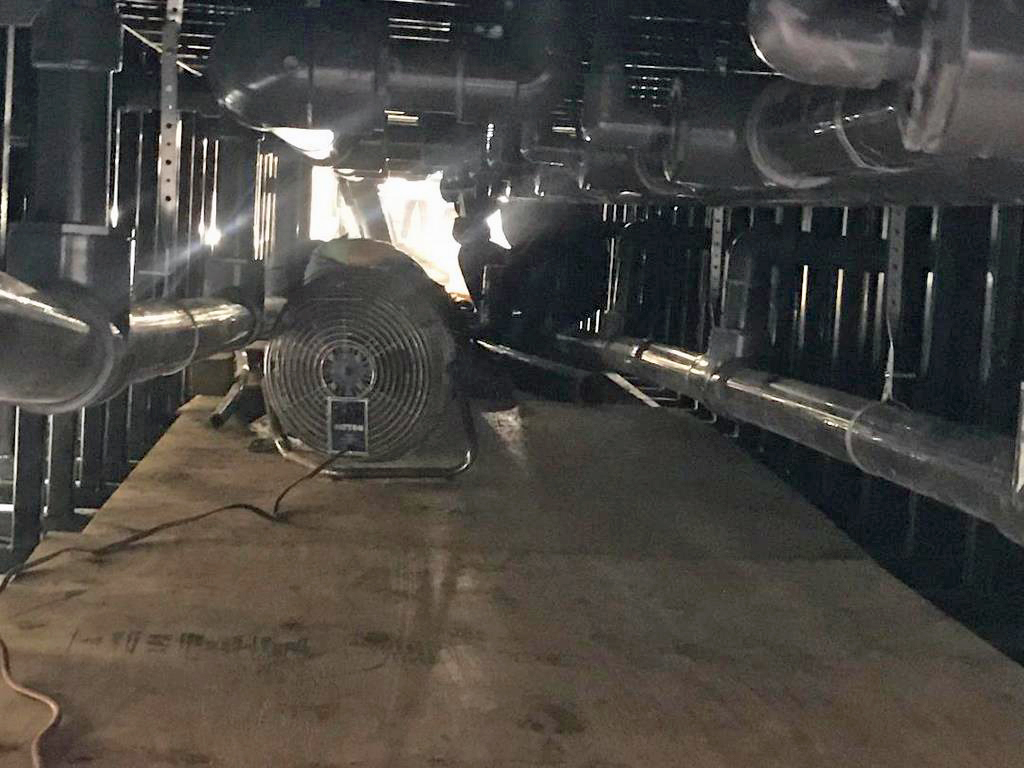 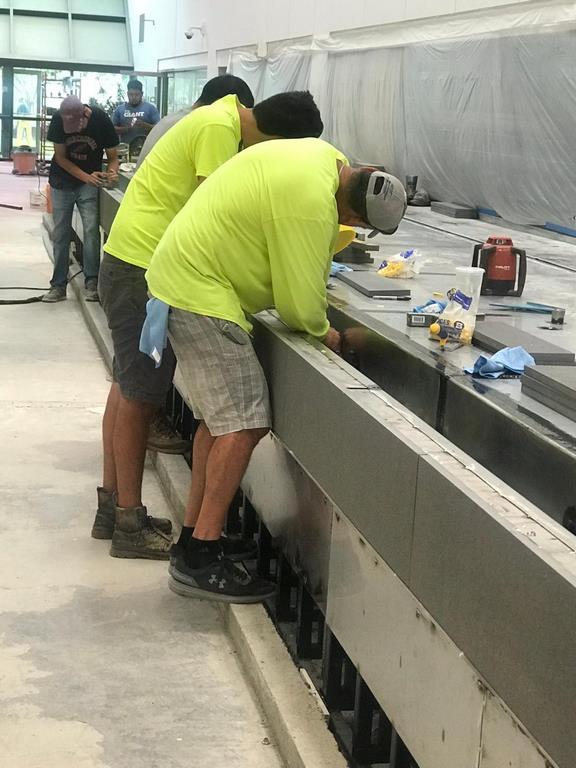 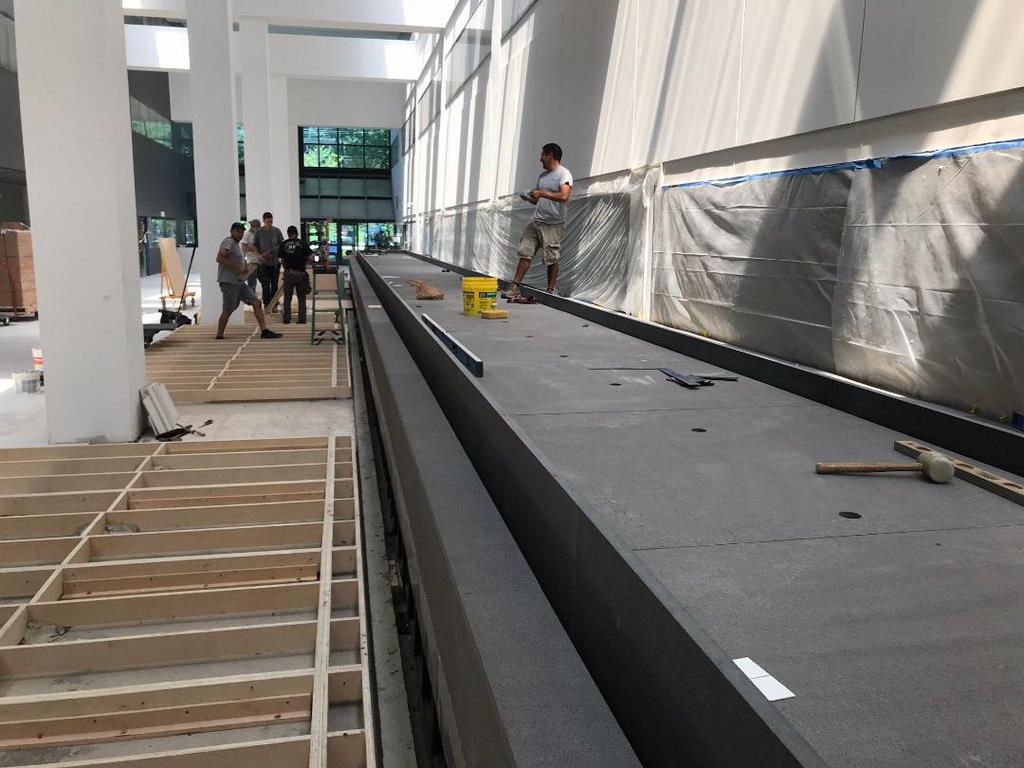 The frames, once welded together, were open in the core, providing a uniform passageway slightly more than four feet wide and about three feet tall from end to end. We laid down plywood sheets along the passage’s full length and brought in a bunch of low-slung wagons and some auto-repair-style creepers to move pipes, parts and personnel up and down the line. It was cramped and warm in there, but we still had to insert all of the plumbing required to complete the fountain.

The troughs are dead level, so there are two-inch drop lines at eight-foot intervals to allow water to feed down into gravity-fed lines that slope more than two feet from each end in the passage toward a central line that feeds the surge tanks. We also set up pipes for the 24 bubblers that appear at four-foot intervals along the fountain’s surface.

As mentioned above, beneath the fountain is an underground parking area through which we’d previously run the drain and feed lines over to a pump room that was 150 feet away. For the drainage system, the fact that the existing structure gave us seven vertical feet to work with was a big help: Again, we were able to use gravity with the lines to the surge tanks, and the water literally rips into the tanks through four four-inch pipes that drop down diagonally across every available inch of space we were given.

For the pumps, we worked (as we usually do) with quality pool equipment with variable-speed drives and WiFi-based control systems. We know from our experience with fountain renovations that the systems in use tend to come from specialty firms that aren’t quite as responsive as we want them to be. We know that pool pumps (as well as the ultraviolet sanitizing systems and chlorinators we’d be using) are readily available from our local distributor, usually within hours, so serviceability issues tend to vanish.

In this case, we used two pumps and know that the system will operate with just one of them in brief intervals when the other is offline for repair or replacement. No down time always makes clients happy, and we’re glad to oblige.

Back in the atrium, we were busy placing the stone slabs and the skirting materials while work was ongoing within the fountain’s interior and in the parking garage below. We core-drilled holes for the bubblers on site to accommodate any slight inconsistencies in plumbing placements, slid the big slabs across our transfer tables and set them in place.

With everything ready, we filled the basin and watched as the water rose and fell over the edges with exactly the effect we wanted. When the bubblers initiated, all we had to do was play a bit with the flow using a cell phone to tune the sounds the overall system made in the space. The bubblers make noise on their own, of course, but they also modify the way water flows over the edges, breaking the sort of monotony that can affect perimeter-overflow systems. All in all, every phase and detail worked out perfectly. We were in and out of the atrium after just three weeks of hard, demanding work; the system performs beautifully; and the client is thrilled with the different ambiance created by replacing the old fountain. Now the space is set up with bleacher-type seating and even some cushions to boost the spirits of employees who work there.

As has been stressed repeatedly, planning was the key: We used all our collective know-how as a company to think the entire process through, step by step from beginning to end, visualizing every detail and defining needs and solutions before we ever started fabrication or began work on site. Communication across all disciplines was essential here as mechanical systems, hydraulics, fabrication and supervision wrapped themselves tightly together so that everyone had input, all concerns were heard and nobody walked into any situation unprepared, whether in our shop or on site.

In this case, everything snapped into place – and watching the water flow over the edge was the perfect affirmation of the approach we’d defined months earlier. The coolest thing? The client has involved us in two more projects, with more likely to follow.

Robert Nonemaker is co-owner of Outerspaces Inc., a design/build firm based in Glen Mills, Pa., that specializes in large, complex, high-end residential and commercial landscape, pool and fountain projects. He also owns Robert Nonemaker Exterior Design, a firm that offers design- and construction-consulting services to architects and landscape architects throughout the country.