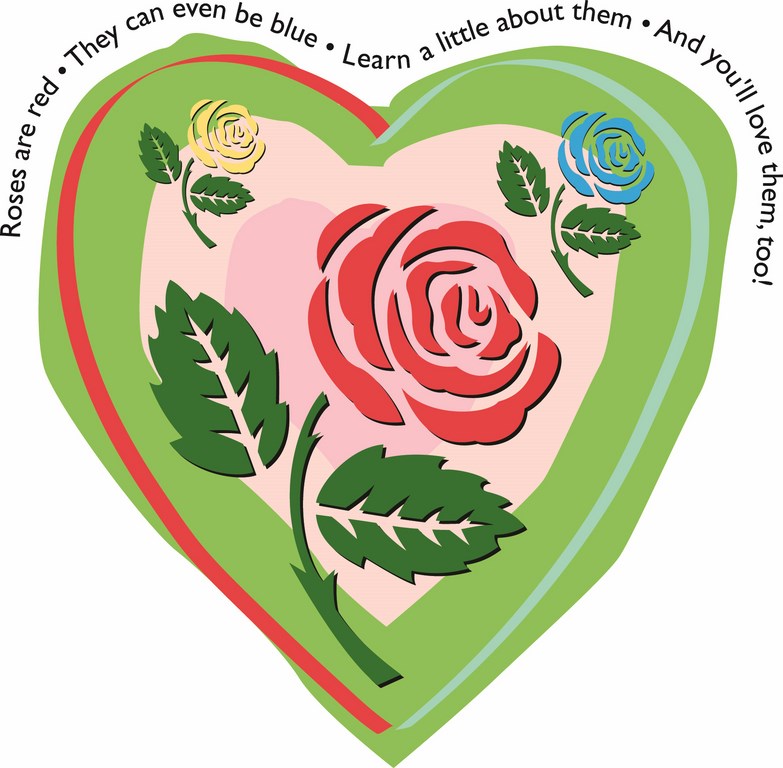 Let’s say your clients have spent all their loose change on your watershape and can’t afford to hire a landscape designer or architect. They don’t even want to meet that wonderful person you’ve been telling them about. So why not suggest a few plants that will really spiff up their new backyard Niagara Falls?

If you’re brave enough to try, I’ll help you here and in a couple of future columns. Let’s start by talking about roses.

WHAT’S IN A NAME?

Growing up, I hated my last name. I hated being called Rosie, Rosebud or even just plain Rose (which always seemed to be pronounced in a mocking tone). I even hated the plants.

My mother, however, absolutely loved roses. She couldn’t get enough of them, and I’m sure she was thrilled she had met someone with that last name so she could enjoy making her own Roses! She and my father created three of us, in fact, and my brother carried on the tradition by finding a spouse named Rosemary who, yes, does use her married name – Rosemary Rose! 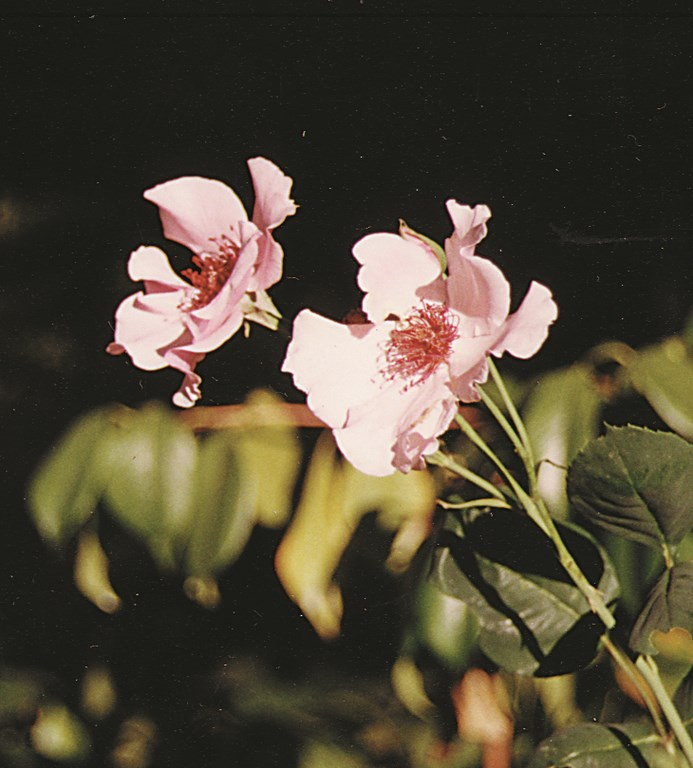 After truly settling into my profession as a landscape designer a few years ago, I had to choke out those dreaded words every child hopes never to have to utter to his or her parents: “You were right.” I, too, had fallen in love with roses, and after dealing with my anger of being called Rose in a derogatory manner (or so I thought) all those formative years, I delved into learning as much about roses as I could.

After all, if you’ve got the name, why not go with it? And so I have.

For all that, I am not a traditional “rose enthusiast.” I have not read every book on cultivating roses, and I prune my 70 rose bushes more severely than the experts would. I fertilize only three times a year, and I do it the lazy way: I don’t even work it into the soil. I have my own favorites that are based on nothing more than my own personal experience, and I don’t favor traditional varieties.

With that disclaimer, I would like to impart my advice and some of my favorite selections for any rose garden – and start by explaining what any of this has to do with watershapes.

Basically, this is worth discussing because so many people believe that roses will die next to a pool or will impale their beloved pool guests with those nasty thorns. It’s important to know how to treat them (the roses, not the pool guests) in this environment, and it helps if you know which ones pose the least threat to your social status – and your guests!

There are different types of roses. My experience has shown me that each type works well under different circumstances and with different clients. I’ll just touch on a few of my favorite classes; there are many more, but these are among the most common. 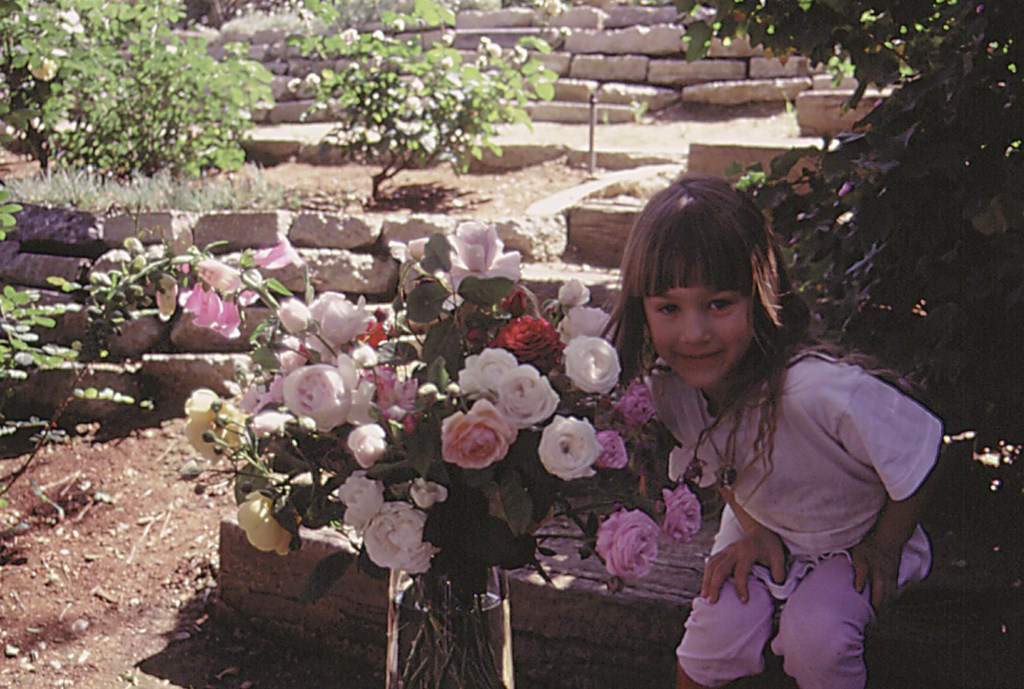 [ ] Floribundas. Floribunda roses are great for clients who don’t like roses because they think all roses look leggy and that the plants are ugly.

Floribundas are a rounder, shrubbier plant with (typically) smaller blooms, but many have vibrant colors. They also have thorns, but in my experience they are considerably less “aggressive” than other classes; in addition, because of the shape of the plant, the thorns are less exposed, reducing the possibility of injuries to passersby.

In my estimation, floribunda roses are the best types of roses to use next to a watershape. Many of you may be familiar with the “Iceberg” variety, which can produce hundreds of white flowers during a single growing season. (I’ve listed more of my favorites in the sidebar below.)

[ ] Hybrid Teas. Hybrid tea roses tend to have barer stalks and lots of thorns, but they seem to be more well known than other varieties, sell widely and produce some of the most spectacular blooms and colors imaginable. I wouldn’t recommend putting most hybrid tea roses right next to a high-usage watershape such as a pool or spa, but I would put them next to a pond or waterfall assuming they won’t get splashed too much. (Splashing can cause mildew or, in the case of too much chlorine, burned leaves.) 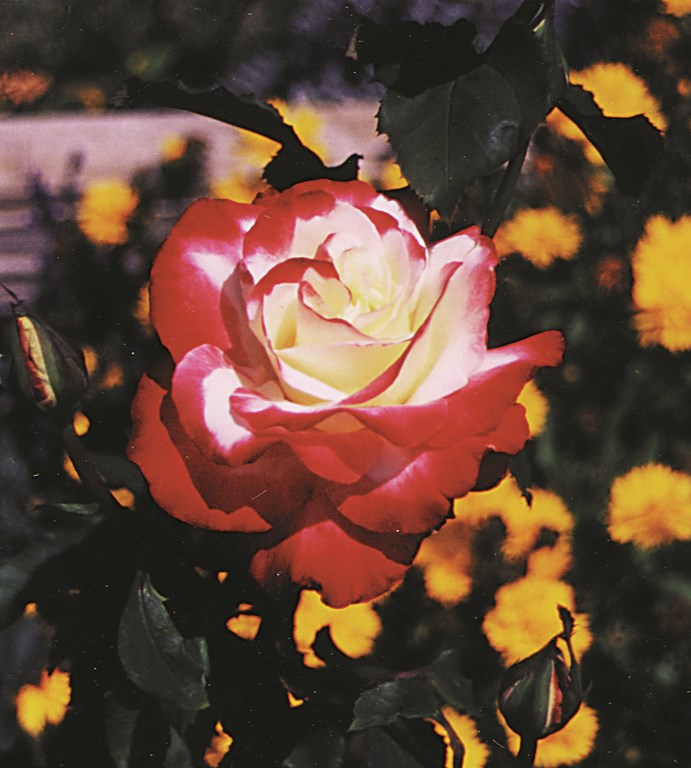 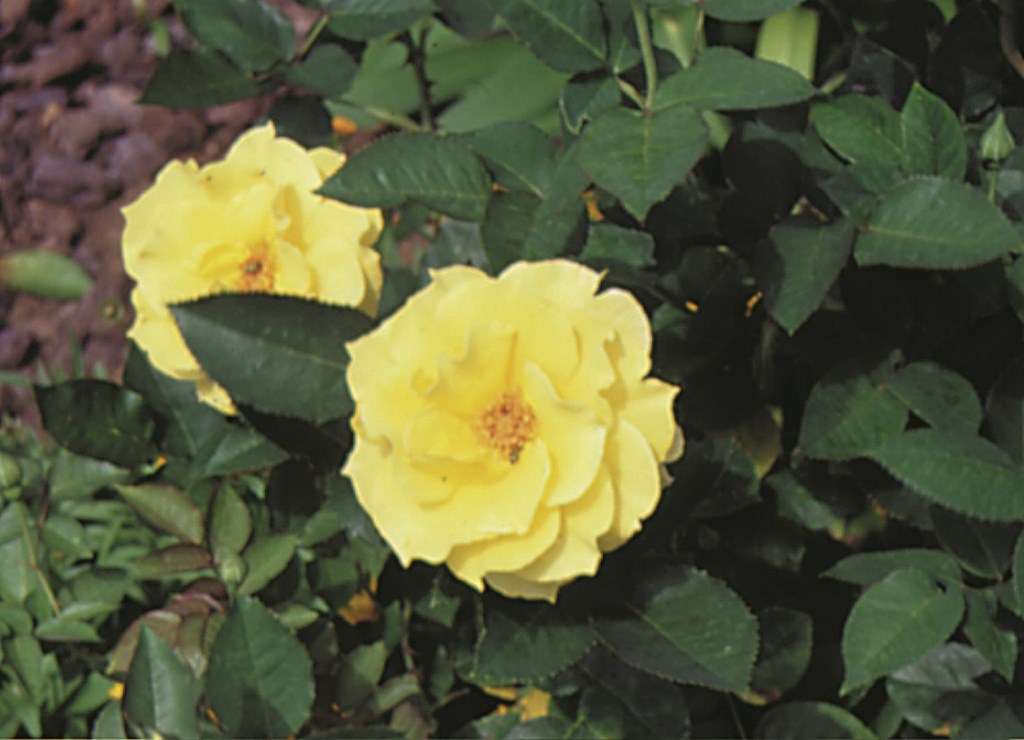 My experience with them has been varied. I like “Double Delight” for its intense fragrance and spectacular magenta and creamy white coloring, but it tends to get thorny, so I cut it back severely (within 18 inches of the ground) when I snip flowers off for arrangements. This keeps the plants bushier (at least in my yard) and promotes more blooms. Strong pruning also makes them easier to place next to watershapes, but I would stick to ponds and waterfalls (lower traffic areas) with this group.

[ ] Grandifloras. I mention this type mostly because it contains another of my favorites: “Lagerfeld.” Grandifloras are similar to hybrid teas, but are typically taller – 8 to 10 feet – with blossoms that are quite large. These are great for background planting, but I would not recommend putting them next to a pool or spa because a spearing by one of these plants could be quite unpleasant.

Both the Hybrid Teas and Grandifloras, however, make excellent accents if you have a raised planter behind a pool or spa. The key is placing them away from a high usage area and letting their flowers create a beautiful background display with water in the foreground. 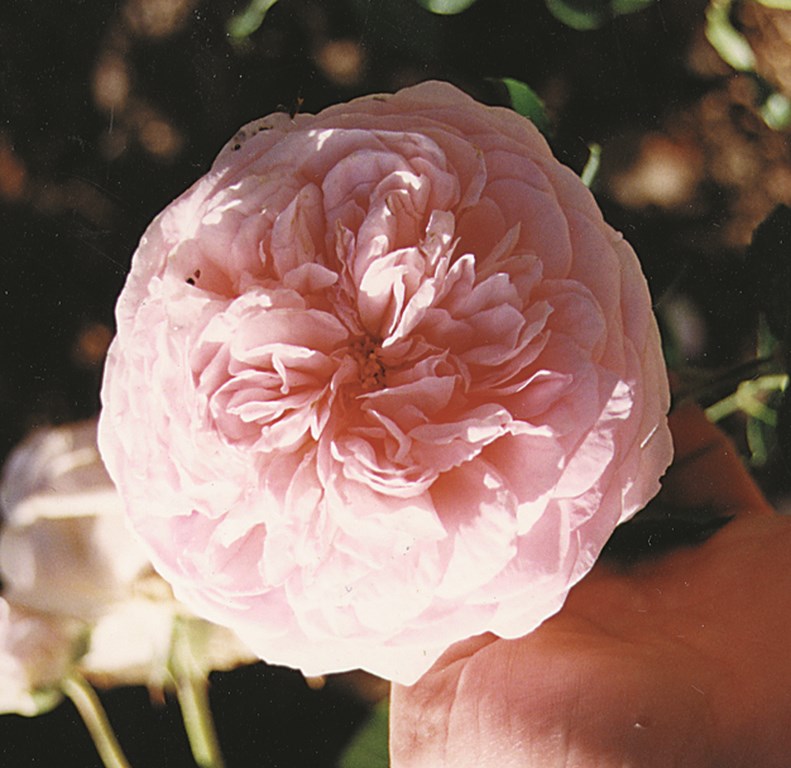 [ ] English and David Austins. A desire for something different brought this group back into style during the 1980s. Hybridizer David Austin has created varieties that are more vibrant and more disease resistant than their traditional early counterparts. These roses may have hundreds of petals on a single flower and often resemble peonies. They may be very fragrant, or simply stunning in appearance.

Many people don’t even realize that these are roses. I would recommend checking each variety out before suggesting it, as their thorns can often be more numerous and sharper than those you’ll find with other groups. “Abraham Darby” is my favorite here for both its prolific nature and the intense fragrance it gives off. The color is also unusual, with pink, apricot and yellow tones mixing and changing as the flower ages. It does have large thorns, and would be better placed in a background along with the Hybrid Teas or Grandifloras.

[ ] Climbers. Climbing roses may be a number of different types of roses. They have different pruning needs than non-climbers and tend to be better suited to low-traffic areas unless they are supported by an arbor that will keep them elevated or in the background.

Most roses you find in nurseries are sold as bare-root roses that have been grafted onto rootstock. A couple of years ago, however, I discovered a grower who sells “own root” roses that are grown from an original plant rather than grafted. These have been proven in many cases to be more disease-resistant than bare-root varieties.

I ended up trying one of these plants because they had a variety called “Rosemary Rose.” It made a great Mother’s Day gift, and while I was at it I bought one for myself. It has turned out to be a prolific bloomer with a beautiful magenta/red color and has survived a plague of rust to which many of my other plants succumbed. 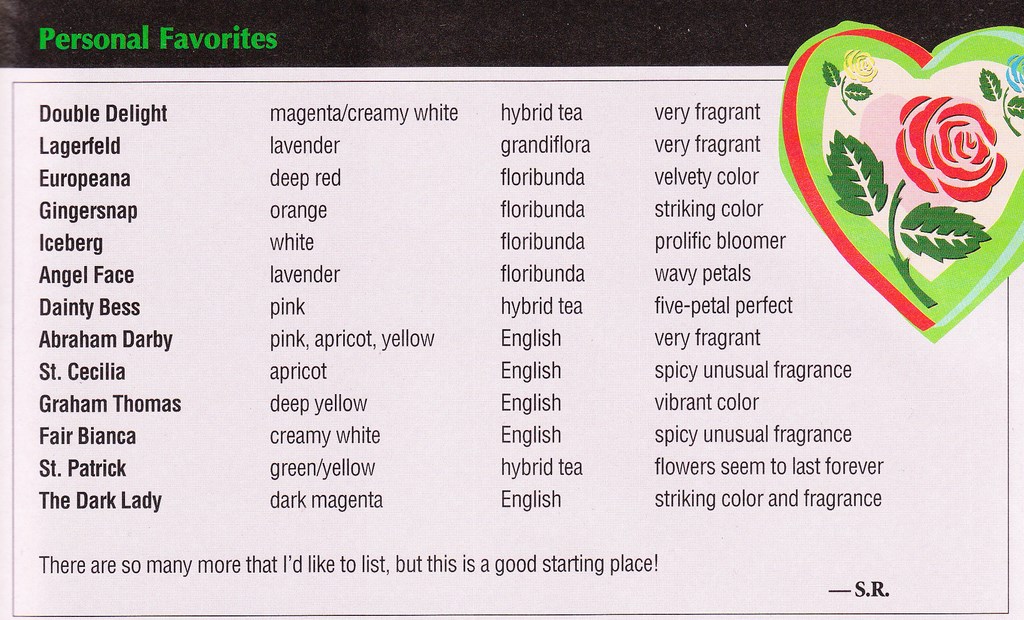 One of my clients and I discovered a brown rose called “Brown Velvet” at the Huntington Gardens in San Marino, Calif., that I could get only in own-root form. We have both had great success with this rose – but we’re still trying to convince our families that the rose is actually brown, not orange or maroon. I guess it’s all in the eye of the beholder!

No matter whether you buy own-root or bare-root, I recommend trying an unconventional feeding method – although don’t let me stop you if you or your clients want to get out there once a month. I feed all my plants Grow Power Plus (or, if you don’t have animals, blood meal) along with Bandini Rose & Flower Food and Bandini Soil Builder.

I suggest sprinkling the Grow Power and Rose & Flower Food around like salt and pepper, concentrating it a little more around the bases of the plants. (Try not to leave any fertilizer touching the bases – it can burn the plant.) I then cover up with Soil Builder until I can’t see the soil or the fertilizers. Then I water and watch them grow.

I don’t cultivate the soil or work the fertilizers in. My experience leads me to believe my plants are getting a gentler dose of food over a longer period of time as the fertilizer slowly seeps into the soil. Call me crazy, but my contractors love this method, too.