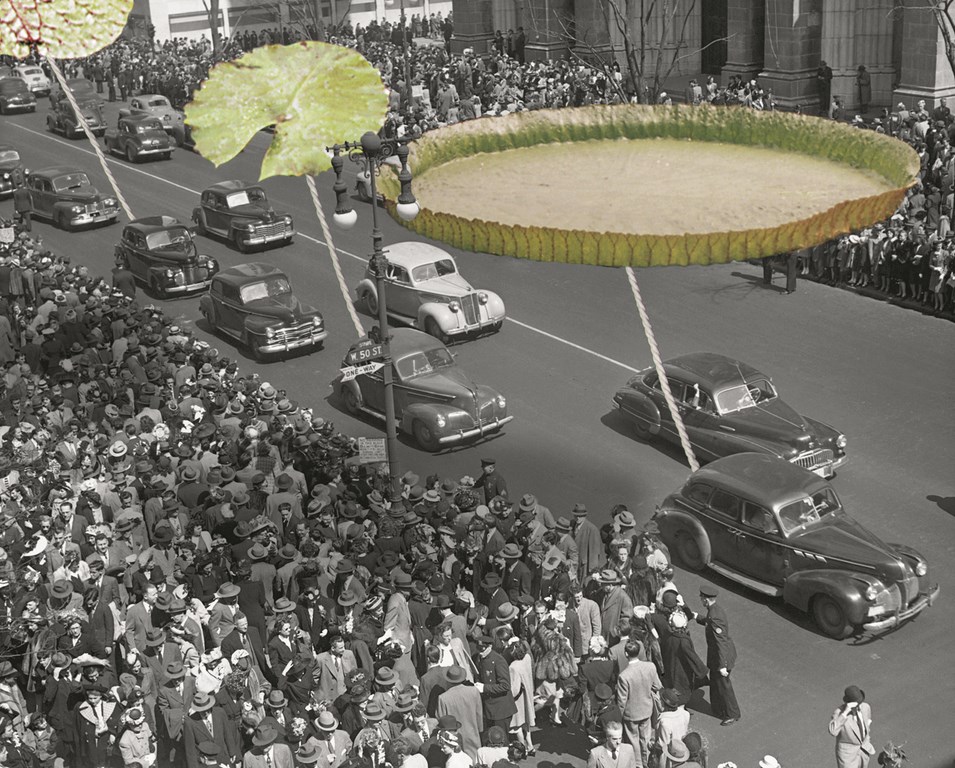 So you read my last article and were so excited about Amazonian Water Lilies that you’d decided to talk some clients into going for it. But alas, after measuring their yard, you recognize that you won’t have enough room to accommodate the gargantuan watershape you’ll need to host such an immense plant.

But your clients are still hot to trot with something unusual, even after you’ve accepted the fact that the giant lilies won’t work for them unless they’re willing to settle for plants with significantly stunted growth.

What do you do? I’d suggest steering them toward the nearest relatives of the Giant Water Lily – otherwise known as (surprise) water lilies. This is in fact the largest category of water plants, and probably the best known when you ask people to think about ponds and their greenery.

Water lilies have an unusual past. Sacred in ancient Egyptian, Chinese, and Indian cultures, they were widely seen as symbolizing virtue. (The botanical name Nymphaeceae is derived from the Latin word nymph, which was derived from the Greek word numph, meaning virgin.) To this day, in fact, water lilies are considered to be an anti-aphrodisiac in many regions of the world.

Through the years, these plants have been hybridized to yield a wide range of sizes, colors, foliage patterns and climate tolerances. They are generally seen in nature with their round-to-oval-shaped leaves floating on the surface of calm waters and can be found almost everywhere in the world. The rhizomes and tubers (that is, the roots) of these plants are sometimes found buried as deep as six feet under the surface of the water at the bottom of muddy ponds. 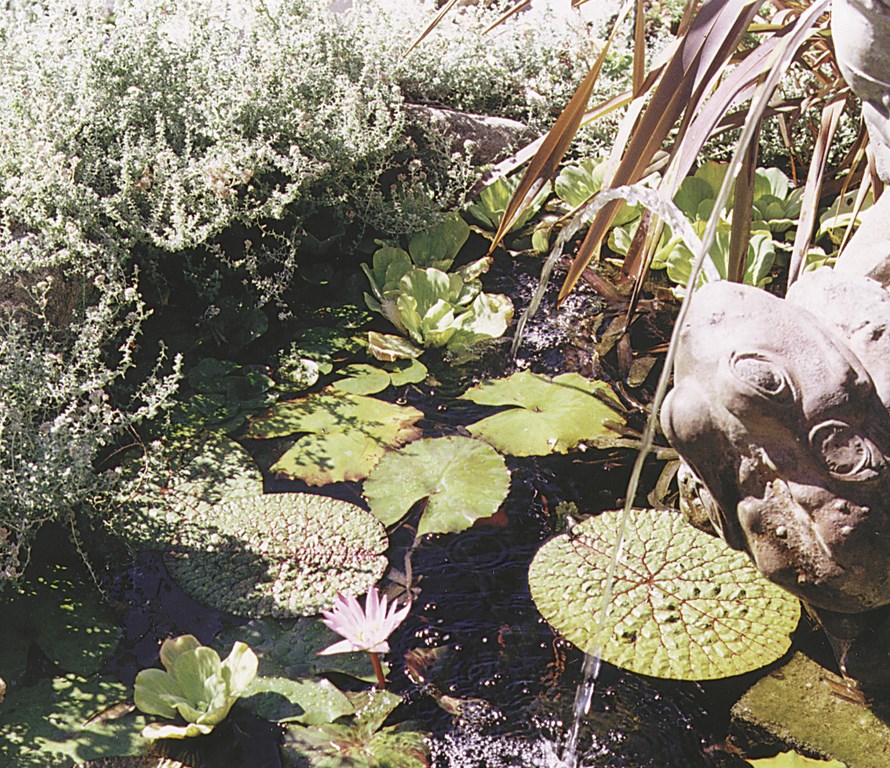 Water lilies have a wide variety of characteristics:

• Some are deciduous, while others are evergreen

• Some have smooth edges, while others have crinkled or serrated edges

• Leaf colors can be any shade of green, or they may be variegated with brown, pink, purple, gold, or green

• Some are fragrant, others are not

• Some bloom only at night.

The most familiar genera will be the Nymphaea, which are divided into two distinct subcategories – the hardy water lilies and the tropical water lilies.

Plants in the two subcategories have different characteristics and need to be understood separately in order to plant, place, and cultivate them properly.

The hardy water lilies are best known for growing wild in natural lakes and ponds and can be grown in a wider range of zones than can tropical water lilies. In fact, there is a least one variety that can be grown in every corner of the United States, including Alaska.

Hardy water lilies come in all sorts of sizes and colors, but the leaves almost always have a rounded heart shape. Their blooms are their greatest appeal, typically lasting three to four days. The flowers are partial to mornings, opening early and closing up for the afternoon and come in almost every color imaginable except for blue – and it’s probably only a matter of time before someone hybridizes a blue one. Some varieties even open up in one color and then change to other colors.

Most of the hardy water lilies are odorless, but there are some varieties that have distinctive fragrances to them. They thrive in calm water and need plenty of sun – generally five to six hours of sun per day with most varieties to produce good blooms. As I have mentioned before, however, guidelines aren’t rules: Experimenting with a shadier area may yield success for you where others have failed.

For best results, each water lily should be planted in its own container. Bearing in mind that the size of the container will determine the mature size of the plant, if you want to keep the plants small (maybe because you have a small watershape), keep them in smaller containers. If you want them to grow larger, gradually transplant each one into a slightly larger container as it outgrows the last one.

It’s important to note that a water lily has very strong roots. In fact, they are fully capable of breaking through a plastic container, so check with a knowledgeable nurseryman to find a container strong enough for the job.

Hardy water lilies require little other care. You only need to remove dead leaves and fertilize. Some people advocate feeding as often as every two weeks, while others feel that about once a month is perfectly adequate. Again, as with any other plants, opinions vary. You need to learn what works best in your specific climate area (and your particular watershape) over time. For best results, you also will need to familiarize yourself with the growth habits of hardy water lilies in your zone.

I won’t make any specific suggestions about varieties here, both because there are so many hardy water lily varieties to choose from and because each one has advantages related to specific climates. But do check with several local nurseries to find out what they carry. If you discover that many of them stock the same one(s), it’s probably because that variety grows well in your zone.

There’s another good, practical reason for following the crowd. If you’re trying hardy water lilies out for the first time, it’s best to choose one that others have had success with because these plants tend to be expensive. You don’t want to “experiment” with a plant costing $50 or more!

As their name implies, tropical water lilies do better in tropical climates. For those of you familiar with the USDA zone system, that means growing these plants south of (or in) Zone 10. (For perspective, the coastal region of Southern California is mostly Zone 10.) But don’t fret: You can grow these plants as annuals anywhere.

Having said this, why would you want to spend so much money on a plant that’s going to die off when cold temperatures set in? The usual reason is appearance. The flowers of the tropical water lilies are typically far more spectacular than those of hardy water lilies (although there are, as always, exceptions to this rule, too).

The tropical varieties are also usually quite fragrant and come in more colors than hardy water lilies, including the elusive blue. They may bloom during the day or even at night with flowers lasting three to five days.

They have similar habits to hardy water lilies when it comes to growing conditions. They like full sun, and still waters are best for producing the greatest flowers. They also prefer air and water temperatures of at least 70 degrees F. They also require the same basic fertilizing and day-to-day care as their hardy cousins.

Even though most of your clients will need to grow their tropical water lilies as annuals, with the room and some tenacity the plants can be brought indoors and kept in aquariums (or some other warm-water vessel) through the winter. Unless it’s an unusual and valuable variety, however, this may not be worth it. In fact, your clients may end up spending more to keep the plant alive through the winter than they would in buying new plants in the spring.

Water lilies can find their way into watershapes anywhere in the world and should definitely be considered in your design mix. If you have a small pond or container, you may only have enough room for one lily, perhaps with smaller grass-like water plants or dwarf plants to complement it. With larger watershapes, the sky’s the limit.

Just remember one important difference between planting in a watershape and planting in soil: You can’t contour the grade!