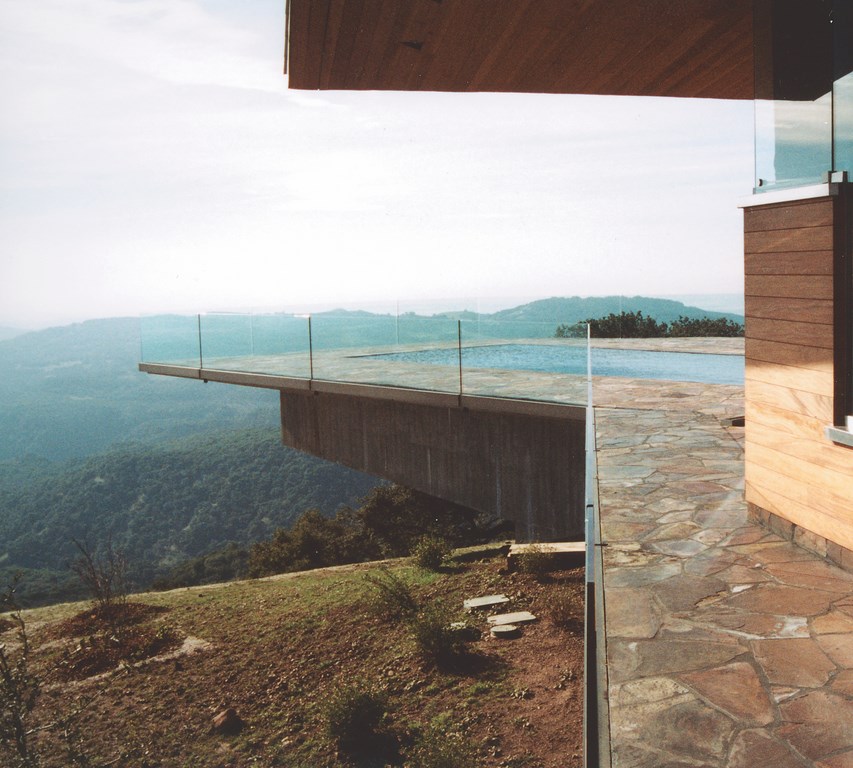 The late, great architect John Lautner is believed to have been among the first to conceive of and build a vanishing-edge swimming pool as a means of more directly tying views across the water into distant vistas. It’s a landmark of modern aquatic design that has been emulated thousands of times in the 45 years since he designed “Silvertop” in Los Angeles, and it’s wonderful to know that his spirit of innovation survives to this day in the company he started.

The home and watershapes seen here are the work of Lautner’s protégé and longtime collaborator, Helena Arahuete of John Lautner Associates (Hollywood, Calif.), who composed it all as a spectacular exploration of organic design principles and the use of water to express and magnify details of a setting while leading the

eye into the distance.

This pool seen here may have a deck-level, perimeter-overflow edge treatment rather than a vanishing edge, but it functions in the environment in much the same way – as a rectangular key to experiencing the home, the ambition of its owner, its spectacular setting and views that literally go on forever.

The indoor/outdoor footprint of the pool begins the process of drawing the eye from inside to outside. There are brilliant reflections off the deck-level water, incredible blues set against rich earth tones of stone decking that flows right into the home alongside the water. 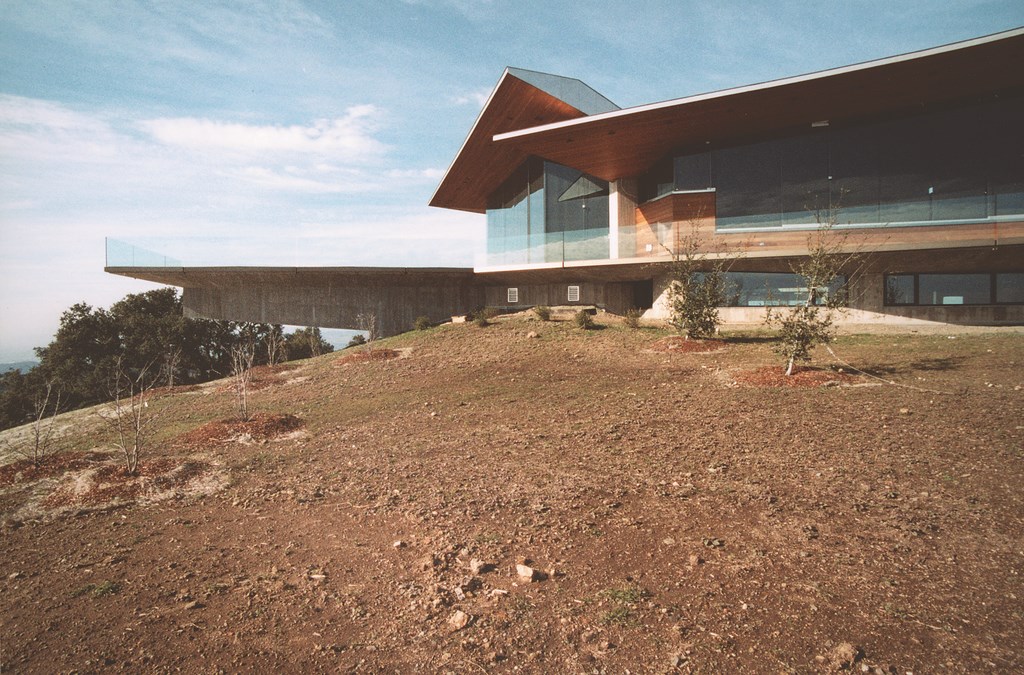 Most spectacular of all, the pool deck has a southwestern orientation that carries the observer beyond the deck and mountaintop and on to San Francisco Bay and the towers of the Golden Gate Bridge.

The photographs will do much of the talking here, because I find it difficult to express the searing beauty of this place in words. I am also humbled by Arahuete’s sensitivity to the mountaintop site and the way she has used steel, concrete, glass and stone to engage all 360 degrees of unobstructed views of what is truly a beautiful part of the planet. 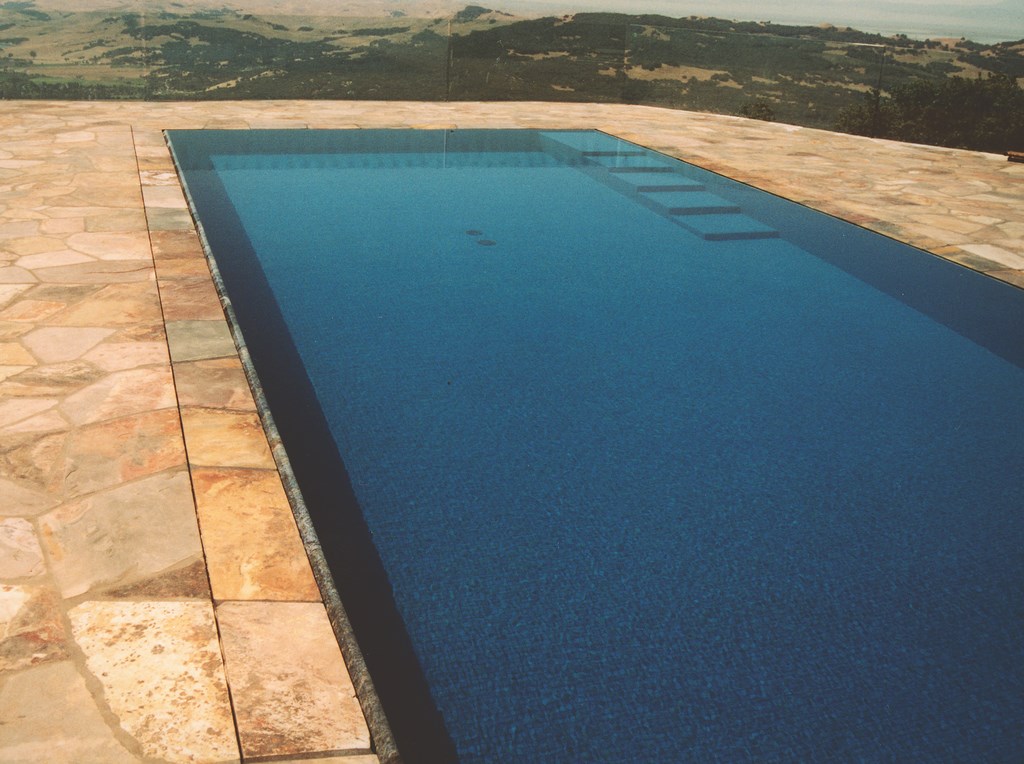 The pool is a key component of this aesthetic package, and the way the watershape’s supporting cantilever juts out over the hillside is a detail that both intimidated and inspired us as we worked. Arahuete’s genius is revealed in just how amazing and impressive the home looks from down the hillside – a thoroughness of design that challenged all of us but inspired us to rise to the occasion. 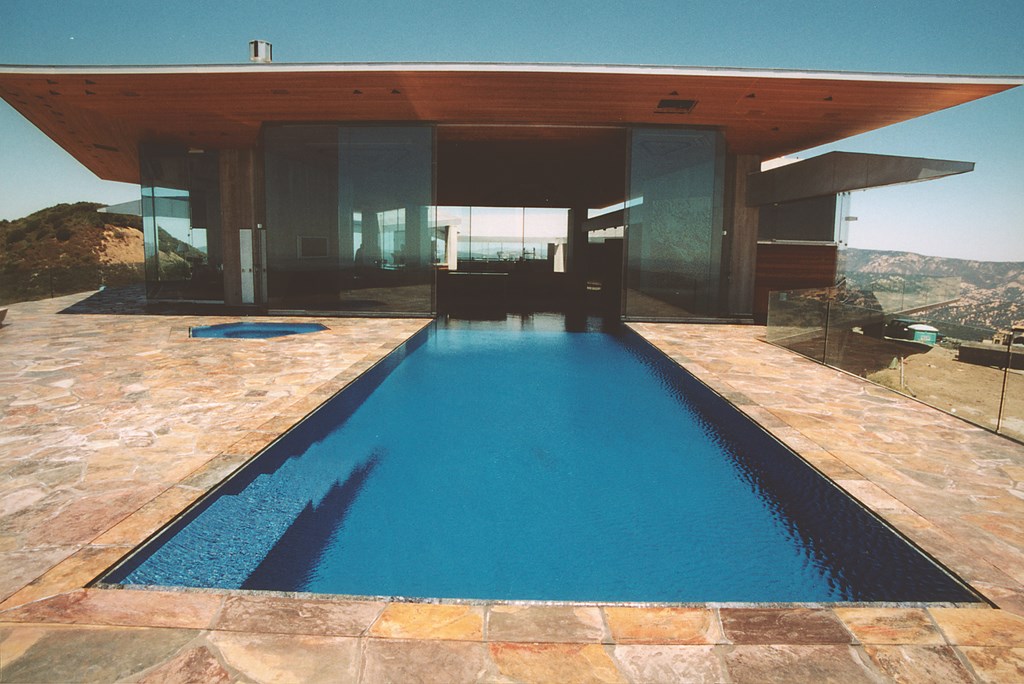 Up on top, from inside the house with the pool at your feet and the glass panels retracted, you get a sense of moving through unending space, with visibility through the atmosphere and your own eyesight providing the only limitations. I came to appreciate the entire structure, watershapes and all, as a work of the sculptor’s art, but at the same time, I also found it a remarkably inviting and comfortable place to be.

In the May 2004 issue of WaterShapes, I covered the process by which the watershapes were built (click here). Allow me to step back now and let the beauty of Arahuete’s dynamic design do most of the rest of the talking.

Steve Dallons is owner and president of Pacific Pools in Alamo, Calif. He established the firm in 1985 after spending five frustrating years working in a volume builder’s design and sales departments. From the start, Pacific Pools has focused exclusively on creating quality, custom swimming pools and spas for residential clients in the San Francisco Bay area. Dallons prides himself on his hands-on approach to project management and his focus on offering clients the highest levels of service through all phases of the design and construction process. He has a background in design and architecture and is a graduate of the Genesis 3 Design School.