Vanishing-edge pools (or infinity pools, as some call them) have become a fixture in the world of pool and spa design. Once considered exotic and highly unusual, you find them now in nearly every neighborhood.

Plenty of designers and builders know what this effect is about and have mastered the hydraulics as well as the configurations and construction details — all of which make these vessels function as they should. Unfortunately, there are others who build vanishing-edge pools without this requisite level of understanding, which prompts me in this installment to highlight some of the technical issues that most frequently get people in trouble.

Let’s start with the observation that these pools are several times more sophisticated than your average backyard swimming hole. They are trickier structurally and hydraulically — and as we’ll see in the discussion below, if you don’t know what you’re doing, you should back away and find someone who knows what’s required. Learning on the fly is seldom a good idea, and in this case, the errors you make can lead to a variety of problems that are tough to remedy without starting all over again.

If you need help, there are lots of resources available. The Genesis 3 Design Group offers an excellent water-in-transit seminar; veteran Texas builder Lew Akins has been teaching his approach to these projects for a good 20 years; and various other courses are offered at national and regional trade shows. In addition, there are several builders, engineers and consultants out there who specialize in these systems.

Whatever the cost of these programs or services, it’s worth the time and expense because they can help you avoid myriad (and costly!) problems — including the following: 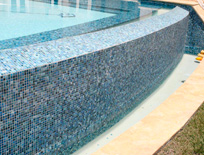 >> Too skinny: The mistakes I most often see have to do with catch basins that are too narrow. In these situations, the area into which the edge spills simply isn’t wide enough to capture the falling water if there’s any breeze, which means that the water unceremoniously vaults past the basin and washes down the slope. (This is a particular concern in areas subject to frequent high winds, including Calabasas and Chatsworth, Calif., where my firm frequently works.) The hillside is happy with the trough depicted at left: It’s wide enough to handle the flow over the vanishing edge even in a stiff breeze, and it has enough capacity that it accommodates bather surge with ease.

By contrast, the trough on the pool seen at left is undersized and too narrow. It doesn’t hold enough water and tends to get sucked dry before there is adequate flow over the spillway. In addition, the slightest wind causes water to fall past the basin and wash down the lawn and slope. To fix the flaw, the contractor installed a surge tank and cut a hole in the side wall of the trough to feed it — but when multiple bathers are in the pool, the surge still causes the basin to overflow to waste. Close inspection of the weir wall also shows tile delamination and cracking in several areas. This probably resulted from poor forming and shotcrete placement, but it also didn’t help that no waterproofing system was applied before the tile was set.

According to some experts, the rule of thumb is that the basin should be as wide as the dam wall is tall. Frankly, that strikes me as excessive in many cases, and in some instances my own basins don’t follow that guideline. But if you have the room and can comply with this guideline without adversely affecting line-of-sight aesthetics, it can’t hurt to play this one on the safe side.

>> Too small: The second most common problem I encounter is basins that are undersized relative to the flow of water over the edge, making it impossible for the basin to contain the surge when several people enter the pool at the same time and, conversely, creating situations in which the basin can be sucked dry because of inadequate water volume.

Either way, you don’t need to dig too deeply into the math to know that the basin needs to be large enough to accommodate the water in transit as well as anticipated bather-related surges.

>> Improper water leveling: Another error-prone reality of vanishing-edge design has to do with placing and installing auto-leveling systems.

A few years back, for example, I saw a pool where the auto-fill leveling device had been installed on the upper level of the system, on the pool itself, where it was utterly worthless. Instead, the leveling system needs to be in the catch basin, where it’s actually possible to tell if more water is needed. You simply can’t determine that need up on top, where the edge itself and the flow over it obviously define the precise level of the pool.

In this case, the builder corrected the problem by installing another leveling system in the basin — but installed it very near the top, inviting a whole new set of problems. The system would fill the trough (which also was too narrow) as the leveler indicated, but because the device was set at the top, the basin overflowed when the edge pump came on or bathers entered the water, thereby flooding the basin and giving the slope below the pool a good soaking.

In one extreme case I saw a few years ago, the “pool builder,” in trying to work his way around an undersized collection basin, came up with the novel solution of bootlegging in a second basin below the first — mind-bending screwiness made even worse by the fact that he installed the overflow system’s fill line in the upper pool. I’m pretty sure this was the builder’s first attempt at a vanishing-edge system, and I can only hope it was his last.

>> Waterproofing the dam wall: This is big issue. When you build a dam or weir wall, the inside of that wall will be submerged in water and will stay cool, while the exterior of the wall will most often be exposed to the sun and get hot. This accelerates the wicking process, pulling water from the wet side to the dry side, which in turn can lead to a number of problems resulting from mineral migration through the concrete. These include efflorescence, tile delamination and degradation of structural steel.

Trouble is, too many builders see plaster as a waterproofing membrane, which it is not. I’ve also heard the argument that concrete with sufficient density or compaction strength becomes impervious to water intrusion. While that might be true to an extent, I’m among those who believe that all concrete, no matter how well applied, is susceptible to some degree of water intrusion and should be treated.

This is why when we build vanishing edges, we use waterproofing agents on both sides of the dam wall and choose products that are designed for specific use on the wet side or the dry side. And we proceed with care, knowing that if we use the wrong product on the wrong side, the waterproofing system will fail.

>> Bad forming: With vanishing-edge pools, there is precious little margin for error when it comes to hitting precise levels and dimensions. That’s true for the entire pool, but it’s especially so with the vanishing-edge wall, which should be as spot-on level as humanly possible in order to create an edge effect that works with the least amount of energy and flow possible.

The forming is critical here, especially when the edge wall is radiused rather than straight. Common mistakes include forming up against the steel, thus making proper concrete coverage impossible; and/or building forms that aren’t sturdy enough to stay steady during shotcrete application. (These are issues and concepts covered frequently in seminars at a variety of pool-industry trade shows by Ron Lacher, an engineer based in Southern California.)

This is far from an exhaustive look at the issues involved in the design and installation of vanishing-edge and other water-in-transit systems. There are fine points of pipe sizing and flow rates that come into play, for example. In addition, there are many other issues related to finishing the edge, including materials selection and installation procedures. Subtleties aside, what we’ve covered here are a number of big issues that lead to major problems, lots of callbacks and plentiful lawsuits.

Lesson to be learned: As a watershaper, you need to know both your skills and your limits and act responsibly when a client asks you to do something that’s clearly beyond your expertise.

Scott Cohen is president and supervising designer of The Green Scene, an outdoor design and construction firm based in Northridge, Calif. He provides consultation for clients nationwide and gives seminars on designing landscapes, swimming pools and outdoor kitchens. For more information, go to
www.greenscenelandscape.com.