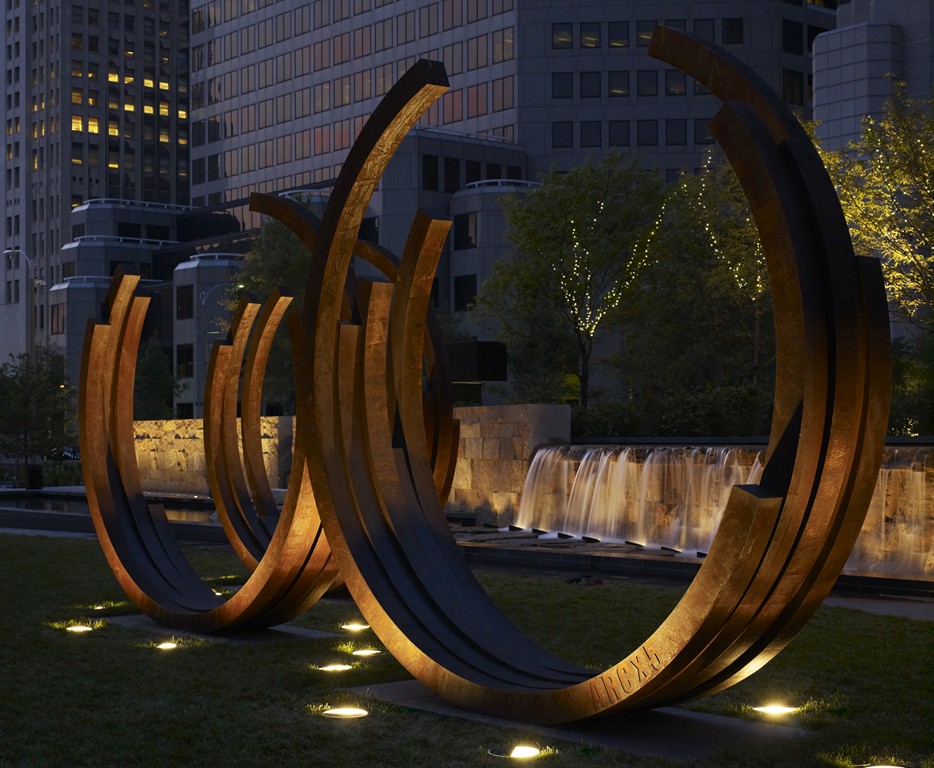 It was no easy task: We were called on to take the majestic landscape defined by the confluence of the Mississippi and Missouri rivers; use it as a template for an urban oasis filled with sculptures, plants and water; and develop a park that would mesh seamlessly with its surrounding urban spaces.

Furthermore, they wanted this park to appeal to every conceivable user – people of all ages, needs and backgrounds – while also serving as a catalyst for growth and a profound revival of the city’s core. And not only was the space to carry that symbolic load, but it also had to function efficiently with long-term reliability.

We at Hydro Dramatics (St. Louis, Mo.) know from experience that projects of this scope and scale require much planning and coordination to go along with large measures of innovation. We also know that these types of challenges make success that much sweeter.

So we jumped into the task with all our energy, supporting the design team charged with developing Citygarden, a 2.9-acre parcel to be filled with garden spaces punctuated by sculptures, stonework and watershapes created in a massive celebration of civic pride.

The park opened in July 2009 and was the culmination of a partnership between the City of St. Louis and Gateway Foundation, a local non-profit organization dedicated to the enrichment of life and culture in the city through outdoor art and urban design. The foundation alone put up the $25 to $30 million required to design and build Citygarden and also dedicated an undisclosed amount to the purchase of its many sculptures.

In concept, the park stands as the only completely open and accessible public sculpture garden located in any urban setting in the United States. Spanning two city blocks, it is open 365 days a year and accessible by all visitors free of charge. The sculptures, which represent the work of two dozen internationally recognized artists, embody a wide range of styles and media – indeed something for everybody. 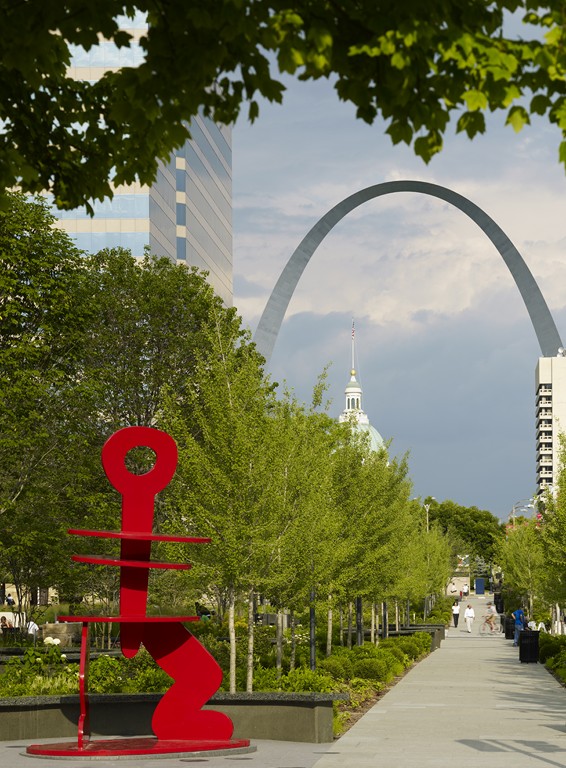 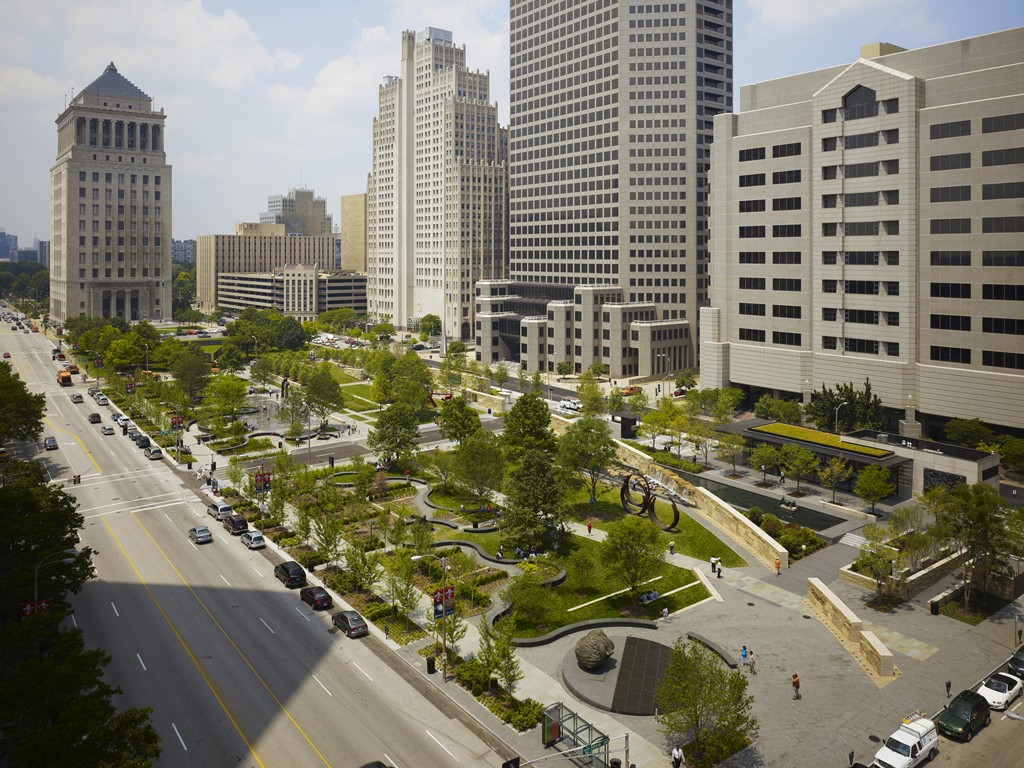 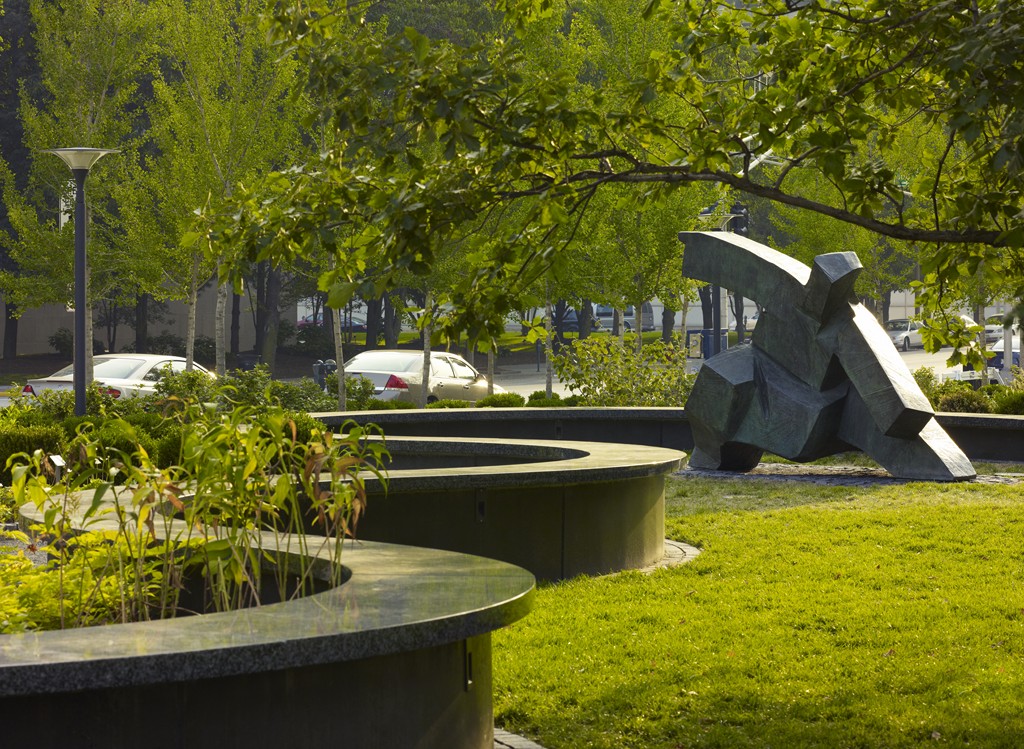 In addition to being an urban park, Citygarden is also a botanical garden that weaves the natural elements of the St. Louis region into a multi-dimensional tapestry – and the water, as countless visitors can attest, is among the most inviting of all those elements.

The design team was spearheaded by Nelson Byrd Woltz Landscape Architects (NBWLA) and reveals the heavy influence of the two rivers that have shaped the city’s geology and history. Lead designer Warren T. Byrd, Jr., FASLA and principal at NBWLA, envisioned the fountains as combinations of stone and water that would not only emulate details of the regional landscape, but would also serve as the aesthetic anchor for the overall garden experience.

He and his colleagues defined three signature water fountains that would use sight, sound and touch in ways that would appeal to observers of all ages. To that end, we explored the best ways to use water in creating contrasting ambiances – on the one hand, active spaces for cooling off and splashing spaces; and on the other, serene spaces for reflection and contemplation in the midst of a busy city.

Let’s look at these three spaces in turn – and also visit a fourth space in which water plays a defining role.

Greeting park visitors at the main entrance is a dramatic water element highlighted by Igor Mitoraj’s “Eros Bendato,” a bronze sculpture set atop a granite disk 34 feet in diameter. A scrim of water sheets gently across and down the disk, lending the space a sense of serenity while also cooling the air.

To accomplish these effects, we designed a fitting to span the top of the disk and connected it to a three-horsepower pump that would distribute water at low velocity across the entire surface of the disk – not enough to generate an unsightly spate of water but sufficient to sweep the surface and clear away any dirt, debris or algae that might want to collect and grow. 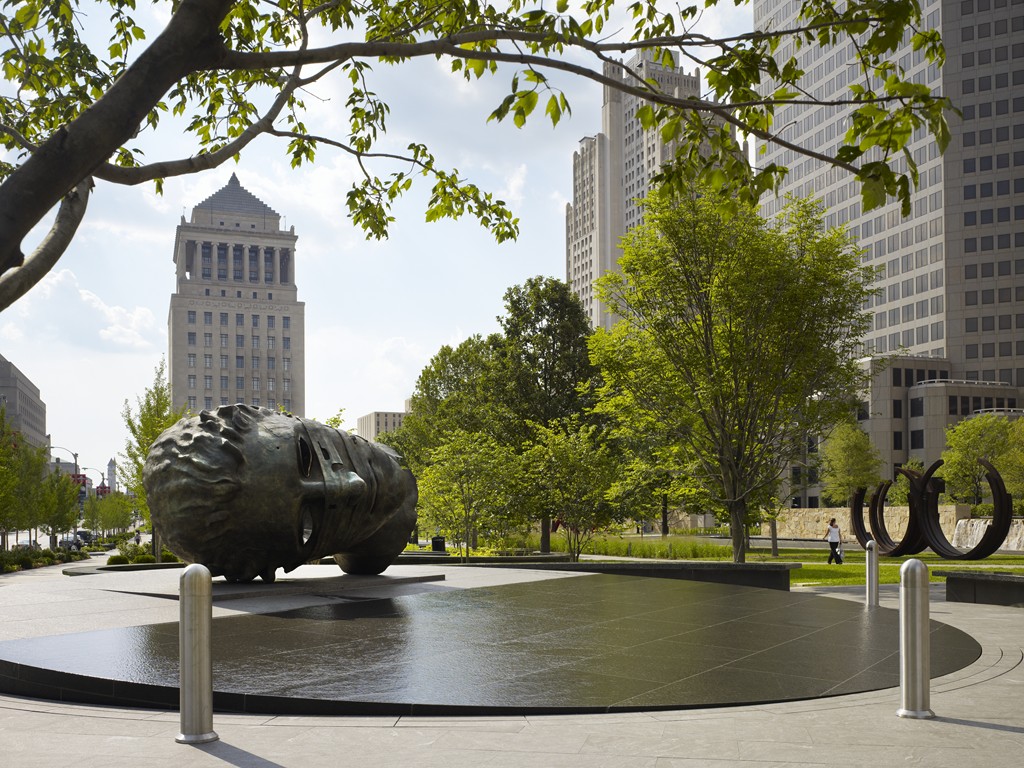 Getting this flow just right was no small challenge. For starters, the slot had to be large enough to do the job, but it also had to be cut in compliance with various industry and Americans with Disabilities Act safety standards. That was so because this sculpture, as is true of all the visitor-friendly sculptures in Citygarden, is meant for hands-on exploration.

Ultimately, we lit on just the right configuration, and the water gently spills down the disk at a continuous rate to create an appealing, shimmering effect. At the bottom of the sculpture, the water disappears into a narrow concrete trough via which it is filtered and recirculated to the top slot.

The success of this composition depended largely upon the skills of those who installed the granite with such precision. Two St. Louis-based firms get the nod here: BSI Constructors (which served as the park’s general contractor) laid the massive concrete foundation and Leonard Masonry surmounted it with a two-inch mortar bed, preparing the way for the meticulous installation of the granite.

The park’s second major water element is a split-level, 180-foot-long, 20-foot-wide, 16-inch-deep basin installed in the shadow of an arcing Missouri limestone wall. Located about a block past the entrance, this watershape is meant to replicate the distinctive bluffs overlooking the Mississippi River.

The limestone wall stretches throughout the two-block space, with one section featuring a state-of-the-art, ten-foot screen for displaying video art and, occasionally, motion pictures. On opening day, for example, the screen displayed a ten-minute time-lapse video that portrayed the 13 months of the park’s construction process, giving observers the chance to watch the garden unfold.

As for the two basins, the upper level is situated next to an unusual indoor/outdoor glass pavilion café and includes a tranquil pool that surrounds “La Riviere,” a bronze female nude by artist Aristide Maillol. This upper basin flows to the lower basin by way of a waterfall that cascades across an angled, 40-foot-wide break in the limestone wall. 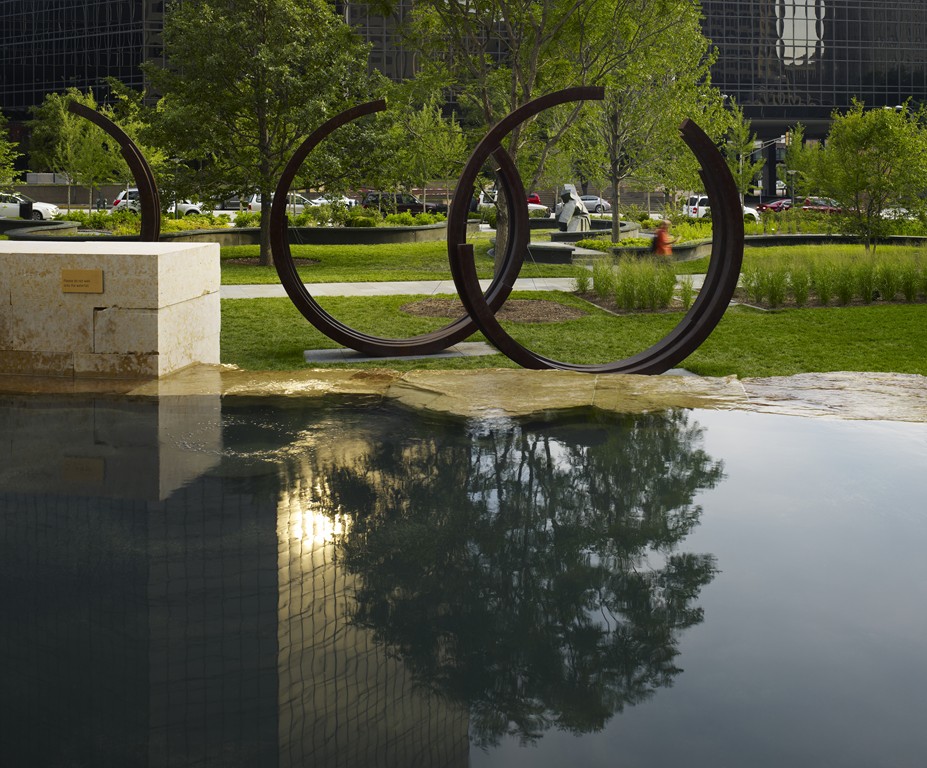 This design presented numerous difficulties. The designers requested, for instance, that the water in the upper basin be kept smooth to make it as reflective as possible in highlighting the sculpture. The pool was relatively shallow, which made it tough to place and space inlets in ways that did not disturb the water’s surface while also keeping the flow at a sufficient level to achieve the perfect cascade.

Moreover, they wanted the pool below that massive flow to be serene as well. We accomplished this by relying on a 20-horsepower pump to drive water to carefully placed inlets, then used the stone pads set at the base of the cascade to quiet the water as much as we could. Not only is the result functional and dramatic, it also brings sight and sound to the setting while muffling the traffic noise.

As with all of Citygarden’s waterfeatures, the water in these basins is filtered, treated and recirculated. There’s also a special thermal detector that shuts the system down automatically when the air temperature approaches the freezing point, but we set the basins up with a heater that keeps the waterfeature fully operational well into the colder months and brings it back on line as soon as winter releases its grip.

There’s a fourth watershape within Citygarden – this one cut into the splash plaza and intended to offer a sharp contrast to the lively fun offered by the spray system in the form of a serene pool containing “The Voyage,” a small, thoughtful bronze sculpture by Jean-Michel Folon. 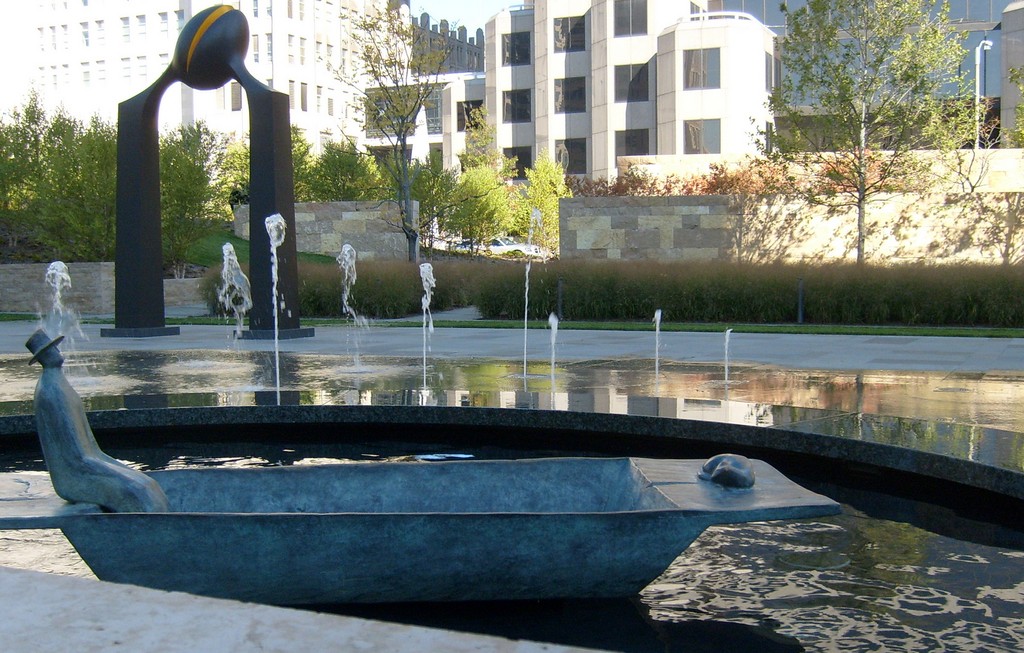 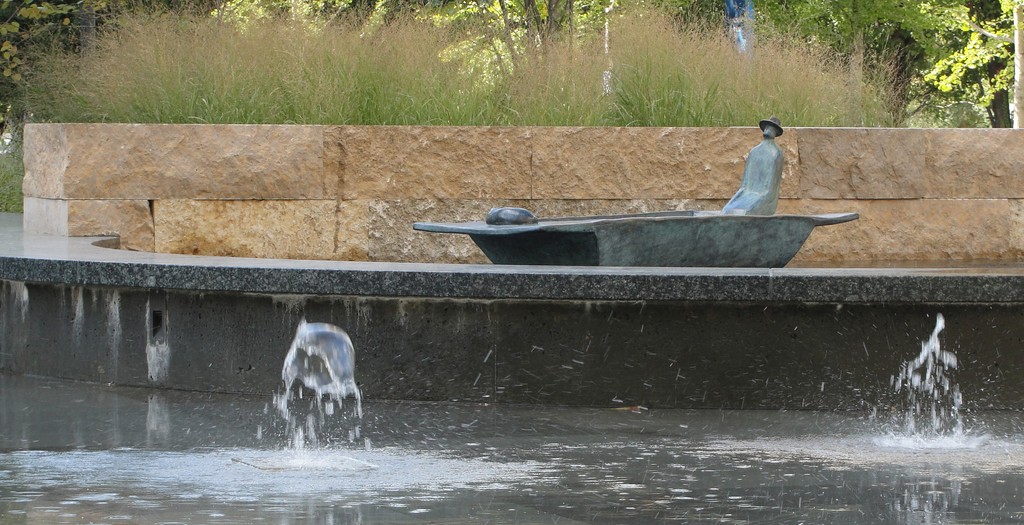 Along with his NBWLA colleagues Sara Myhre, Breck Gastinger and Mary Wolf, Warren Byrd had observed the ebb-and-flow patterns of a river and wanted to bring a sense of water’s fluctuating rhythms to this pool, basically so the sculpture (of a man and boat) would appear to float. This left us with the considerable challenge of replicating water eddies and backflows of the sort seen in quiet river coves.

To achieve this, we used a low-horsepower pump and designed special fittings that break the surface tension of the water. The effect is mesmerizing – just the right touch to “buoy” the sculpture and create a contemplative spot in an otherwise bustling park.

The Art of Play

The third of Citygarden’s big waterfeatures is among the largest interactive “play fountains” in the United States. This state-of-the-art spray plaza, where children and the young-at-heart can play with rare abandon, features 102 vertical water jets – the largest collection of such jets in any of the nation’s spray areas.

These dynamic fixtures can shoot up to six feet in the air and pulsate in ever-changing patterns along a 120-by-36-foot plaza paved with slip-resistant bluestone pavers from Pennsylvania. The jets have been designed to perform 1,200 different water sequences (all of which can be programmed and monitored on site) and are governed by an anemometer that adjusts the height of the streams according to wind velocity.

Instead of flowing to a draining pool beneath the bluestone pavers, all of the water jetted into the plaza moves directly away to a reservoir and then proceeds to a vault in which it is filtered and chemically treated with chlorine and ultraviolet sterilization before being recirculated. 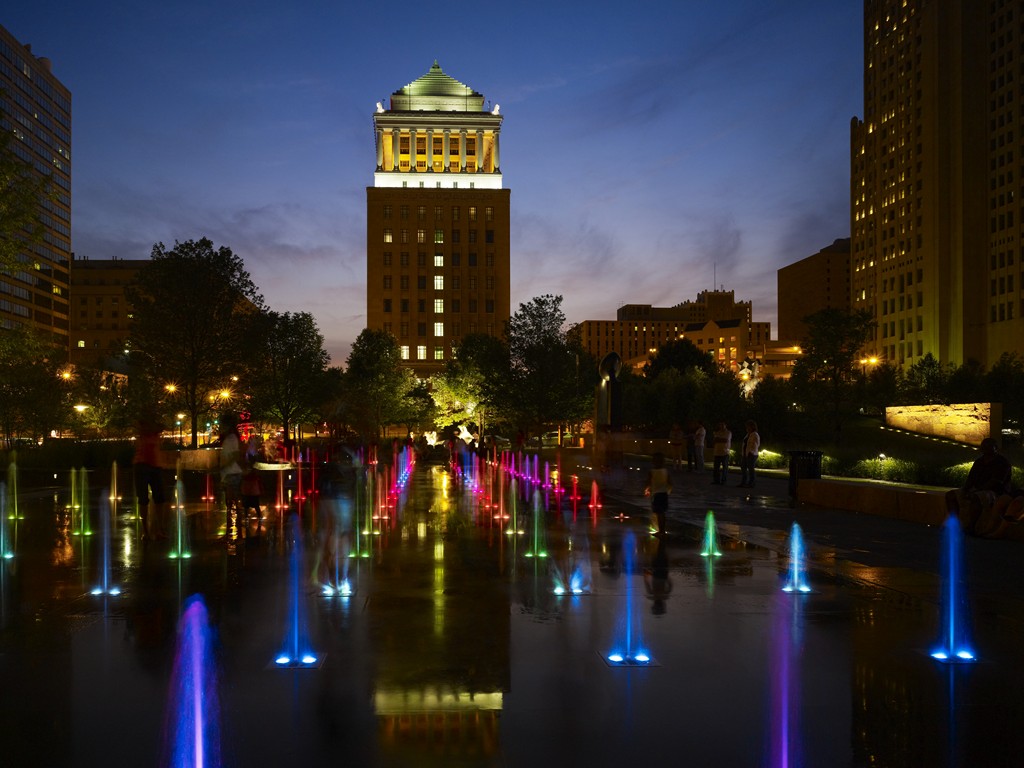 The key to making both the functional and aesthetic programs work had to do with developing a custom, multi-purpose, stainless steel nozzle with a square aperture. On the functional side, each nozzle had to be built into a stainless steel canister that doubled as a drainage head while also housing two LED lights, with everything protected by an acrylic lid. On the aesthetic end, the square nozzle was required to harmonize with the plaza’s linear design, and there was also the fact that the square format saved installation crews the labor-intensive task of cutting circular holes in the bluestone pavers.

Franklin Mechanical, B.E. Scaife Plumbing Co. and Kaiser Electric Inc. (all of St. Louis) performed the expert installation, and it’s all been done so ingeniously that visitors are completely unaware of the labyrinth of more than 20 miles of mechanical and electrical conduits beneath the area.

The LED lights are controlled by an on-site computer located in a subterranean vault we at Hydro Dramatics designed, remotely monitor and maintain. There are seven different power-supply locations, with each running 14 lights capable of generating any of more than 16 million colors.

Kerry Friedman is vice president and general manager for Hydro Dramatics, a St. Louis-based fountain consulting and design firm and division of Missouri Machinery & Engineering Co. With more than 35 years’ experience in the water-pumping and hydraulics industries, Friedman has played a pivotal role in creating a number of the company’s projects in St. Louis, including all of the waterfeatures at the Missouri Botanical Garden; the Grand Basin and Jewel Box in Forest Park; projects at St. Louis University and the St. Louis Zoo; and the Gateway Geyser in East St. Louis – the tallest vertical-jet fountain in the United States. His credits nationwide include My Big Backyard at the Memphis Botanical Garden; The Legends at Sparks Marina, Nev.; and the Bob Kerry Pedestrian Bridge in Omaha, Neb. Friedman also has applied his expertise to projects in San Juan, P.R.; Doha, Qatar; and for the U.S. Embassy in Moscow.