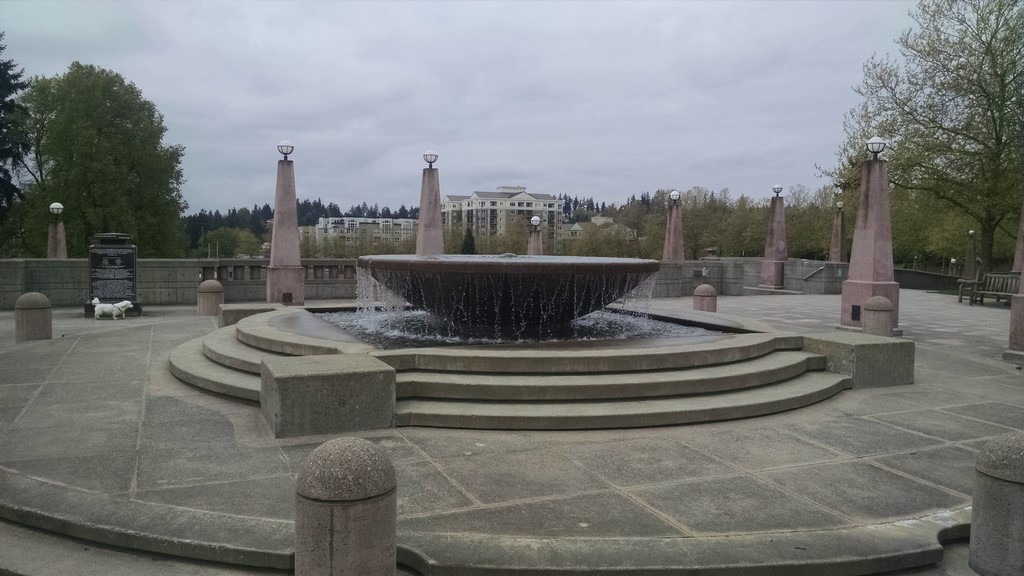 I recently spent several weeks in Kirkland, Wash., doing what I could to help my daughter and her family prepare for the arrival of our grandson-to-be.

One of our outings on a sunny Sunday was to a playground in nearby Bellevue, a place where the cityscape is quite vertical and the buildings carry the names of major companies in a range of high-tech fields, from Boeing to Microsoft. We parked and made our way to the swings to give my granddaughter a workout, then headed for the pond to check out the ducks and geese.

Watching the waterfowl kept the others busy, but my attention was caught by the big spillway/waterfall that fed the pond – then by the canal that fed water to the spillway and, in the distance, by the elevated fountain that seemed to feed the entire system. I had come to Bellevue Downtown Park, I learned, and it was clear that the water system was the heart and soul of the design. 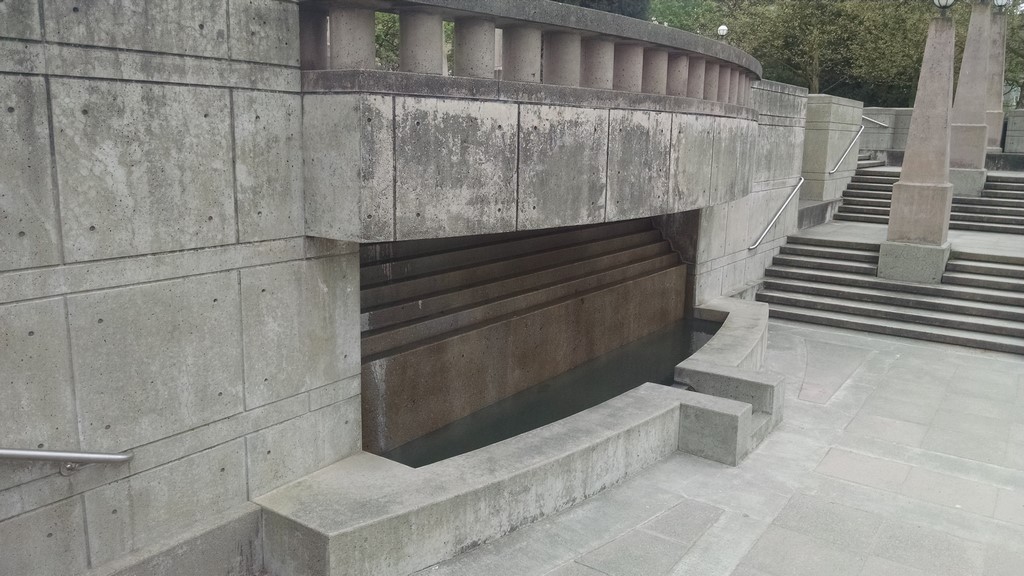 Established on a large parcel that once hosted the school district, the park is a rare demonstration of foresight by city managers. They saw the skyline climbing all over the area by 1980 and wanted to maintain a green space near the urban core as a resource and retreat for local families, visitors and those who worked in the tall buildings.

The fountain sits on a stage-like belvedere opposite the pond. When you reach the bottom of the stairs heading down from the fountain bowl, you hear water trickling along a water wall, suggesting that the big structure above is the fountainhead for all of the water in the system. (That can’t be the case, of course, because there’s simply not enough flow here to keep the canals moving or the spillway brimming.) 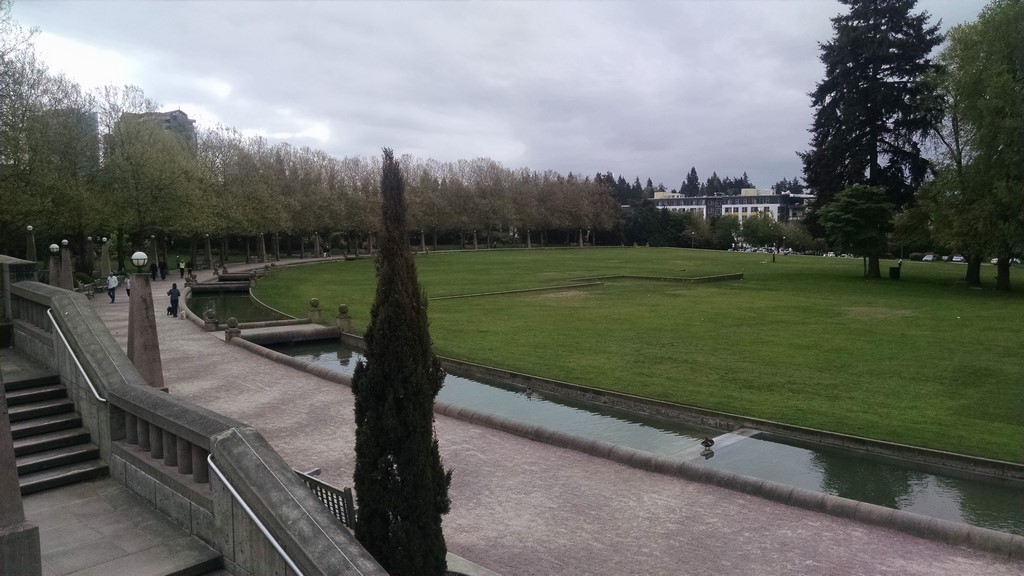 The space was designed in 1984 by Beckley-Myers, a Milwaukee-based architecture firm, after a competition in which 67 companies participated. By intent, the park has been built in phases and is still incomplete: It was set up in a pay-as-you-go arrangement based on results of fundraising programs and donations. The upshot is that the circular canal is only about three-quarters complete more than three decades later – an absence that is only a minor visual deficit because of the immense scope of the overall 20-acre space.

The canals descend from the high spot established by the fountain stage, flowing in both directions along the very gradual slope and moving step by step toward the pond in the distance. It’s a lovely, serene effect, and I was joined in walking along the water’s edge by dozens of others on a warm Spring day. 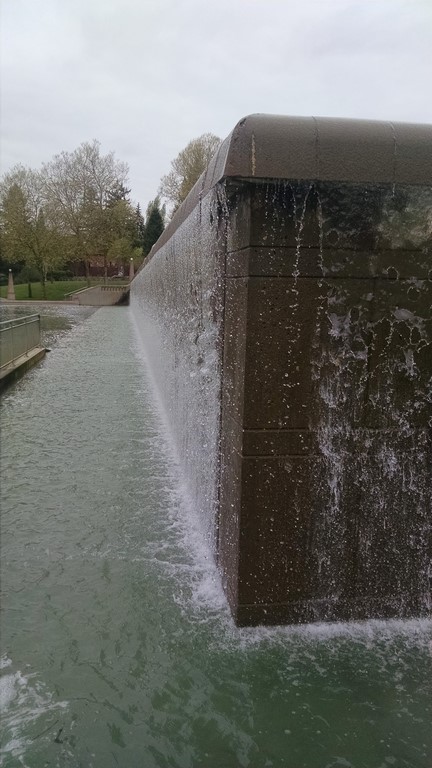 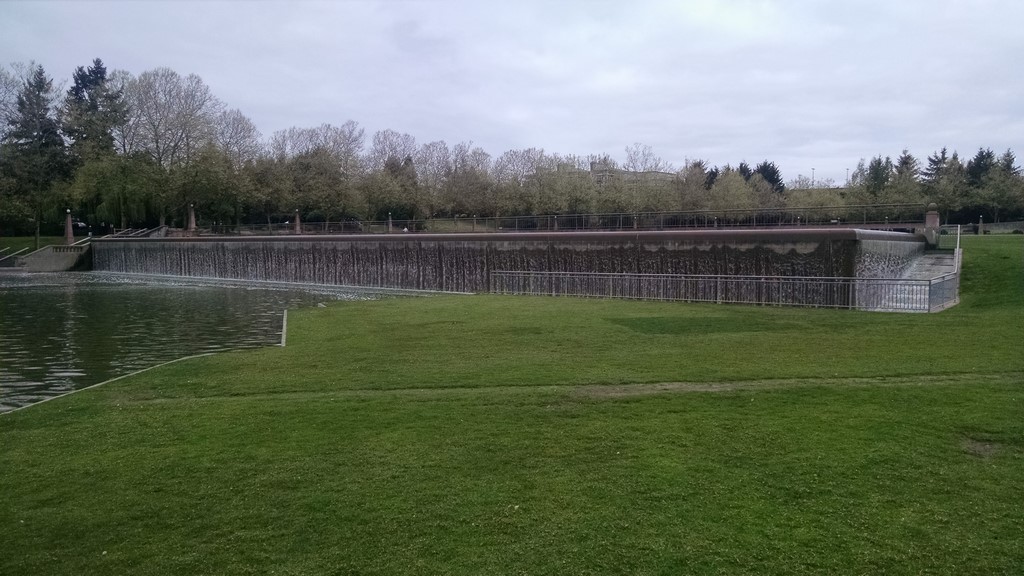 There doesn’t seem to be any sort of timetable for getting things done; basically, what’s needed is the removal of a parking lot to allow for completion of the canal’s final segment and then the addition of an outdoor performance space along with a range of garden amenities. My suspicion is that if it’s taken 25 years to get here, it’ll be a good 15 or 20 more years before I can complete a circuit with water by my side for every step of the way.

No matter, because I like the space as it is – with one exception: What fun is a duck pond if you’re not allowed to feed them? According to my granddaughter, they definitely need to work on that.