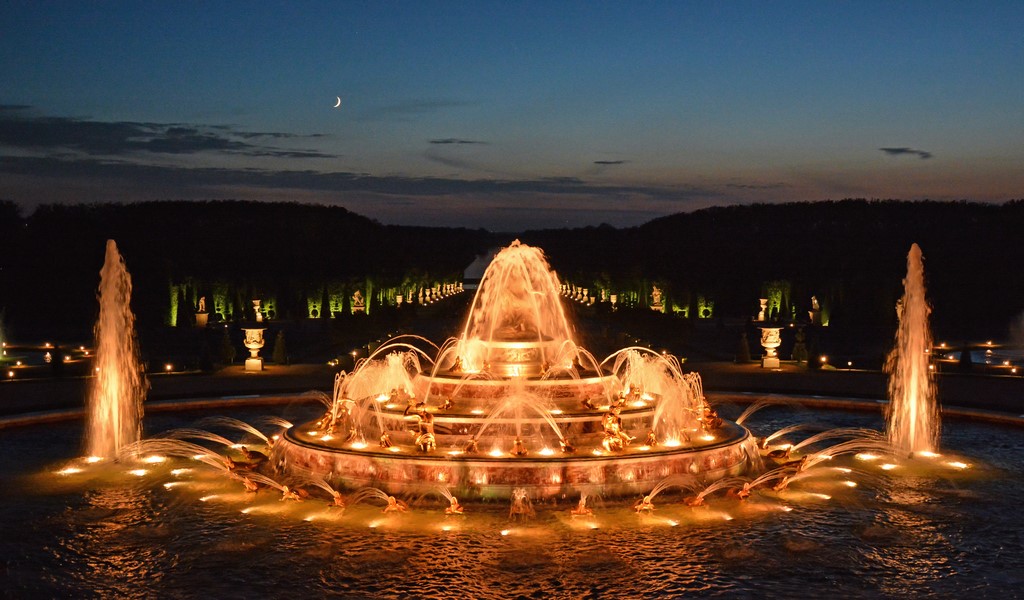 Starting in 1661, Louis XIV of France began a building project at his country estate in Versailles that would keep him busy throughout what remained of his reign. He held on all the way through until 1715, so he had a good, long time to browbeat large numbers of architects, designers and engineers into making the chateau a statement of power, wealth and majesty befitting a man who called himself Le Roi Soleil – the “Sun King.”

Through the years, we at Crystal Fountains (Toronto, Ontario, Canada) have had the chance to participate in lots of grand projects. Some have been amazing, as in the case of the Crown Fountain in Chicago, and others have been spectacular, including our work around the Burj Khalifa in Dubai. But only rarely do both amazing and spectacular come together on one package – and when you overlay that with history to the tune of more than 300 years, you get a sense of what it was like for us to work on various waterfeatures in the gardens surrounding Louis XIV’s country estate.

As reported recently (in “French Classic,” click here), we’d been called in to work on the lighting systems for seven of the garden’s fountains as our part in Phase One of the project, which was completed last year. In Phase Two, completed within the past few weeks, we helped update (and, for the first time, effectively light from within) the famous Latona Fountain as well as Le Théâtre d’Eau (“Water Theater”). In both cases, the goal was to enrich the visitor experience of the gardens – and prepare these regal spaces for another 300 years of awe-inspiring performance.

Completed in 1687, the Latona Fountain is perhaps the most magnificent of all of the 50 waterfeatures in the Gardens of Versailles. Staged in a classic wedding-cake style on four concentric layers, it was designed by Balthazar Marsy and stands on the direct line of sight leading from the palace to the Grand Canal beyond.

The sculptures within the fountain portray the goddess Latona protecting her children, Apollo and Diana, from the insults of pesky peasants. Her patience expired, she got even by transforming the tormentors into frogs. (For good measure and variety, Marsy included some turtles and alligators among the afflicted as well.) This reference to the sun god Apollo is, of course, a natural in a fountain commissioned by the Sun King. 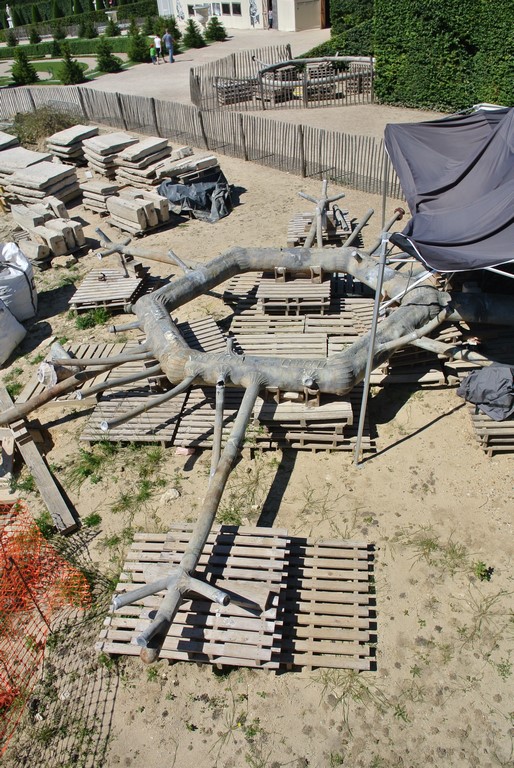 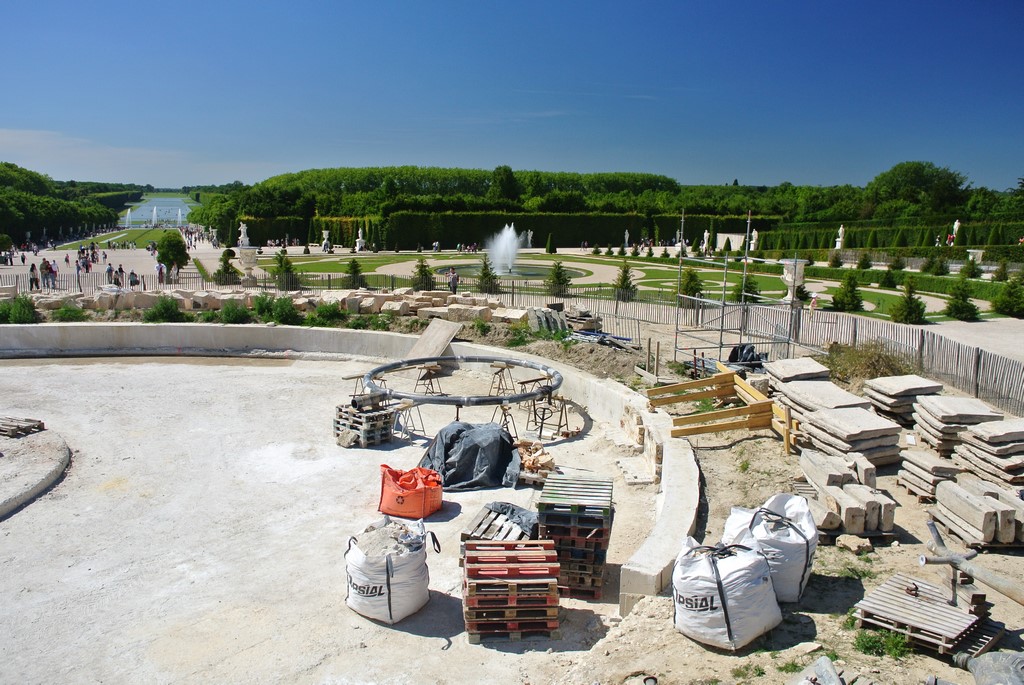 Due to its advanced age and more than 300 years of battering by jetting water, the fountain had suffered significant deterioration by the time we started our work: The rimstones, the basin, the sculptures, the marble details and the antiquated hydraulic systems were all in need of attention. The rules were strict: Working in accord with authentic period techniques, teams of restorers have addressed all of the fountain’s problems, right down to refurbishing of the waterproofing systems and re-gilding all of the lead statuary.

Not far away, Le Théâtre d’Eau had fared better than the Latona Fountain through the centuries, but the fact that it had kept up appearances so well for so long wasn’t enough to protect this charmingly formal grove of trees and its basin from the sudden damage and utter destruction inflicted upon it by a tremendous storm in 1999. Essentially, it was ripped to pieces. 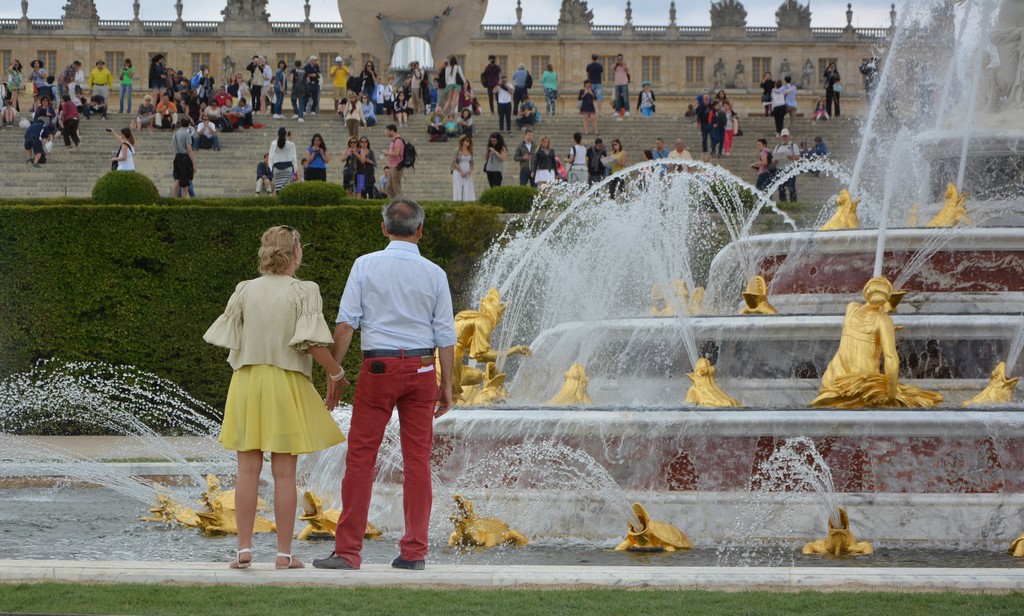 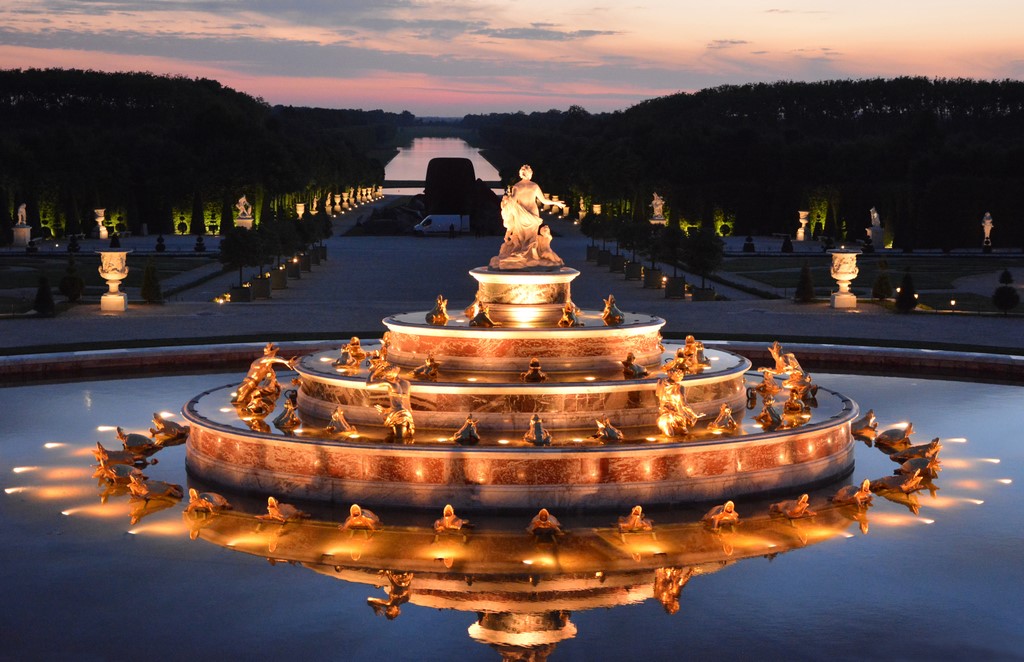 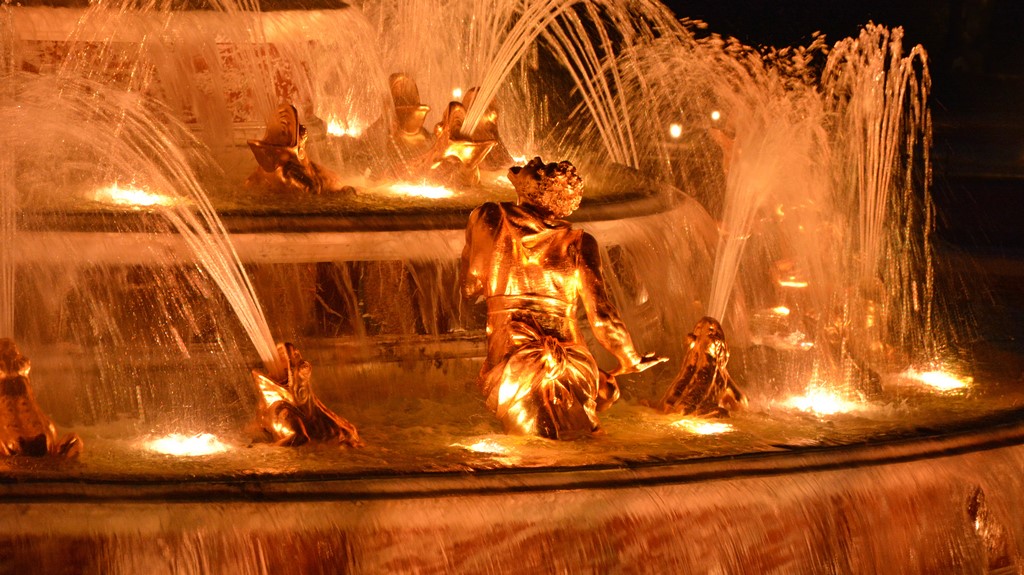 The Water Theater is one of the 14 original bosquets (that is, groves) distributed around the Gardens of Versailles. In this instance, the restoration plan included not only restoring the space to its former arborial splendor, but also updating it with a bit of modern art inspired by the tastes of its garden-obsessed king.

This updating was the subject of an international design competition eventually won by Louis Benech, a landscape designer, and the artist Jean-Michel Othoniel. The new artwork – twisting golden strands of large Murano-glass beads with water issuing from the ends – is a reference and homage to dance steps choreographed and drawn up by the flowing hand of Raoul Auger Feuillet in a 1701 ballet in which Louis XIV himself is said to have participated.

The new sculpture, entitled Les Belles Danses (“Beatutiful Dances”), is the first permanent artwork introduced to the gardens in more than 300 years.

As was the case with the seven fountains refurbished in Phase One of the project, our Phase Two work on the Latona Fountain and Le Théâtre d’Eau included retrofitting both waterfeatures with new LED lights that will permit our working partners at Lyons, France-based Les Éclairagistes Associés (LEA) to achieve the specific color schemes called for in their lighting designs. 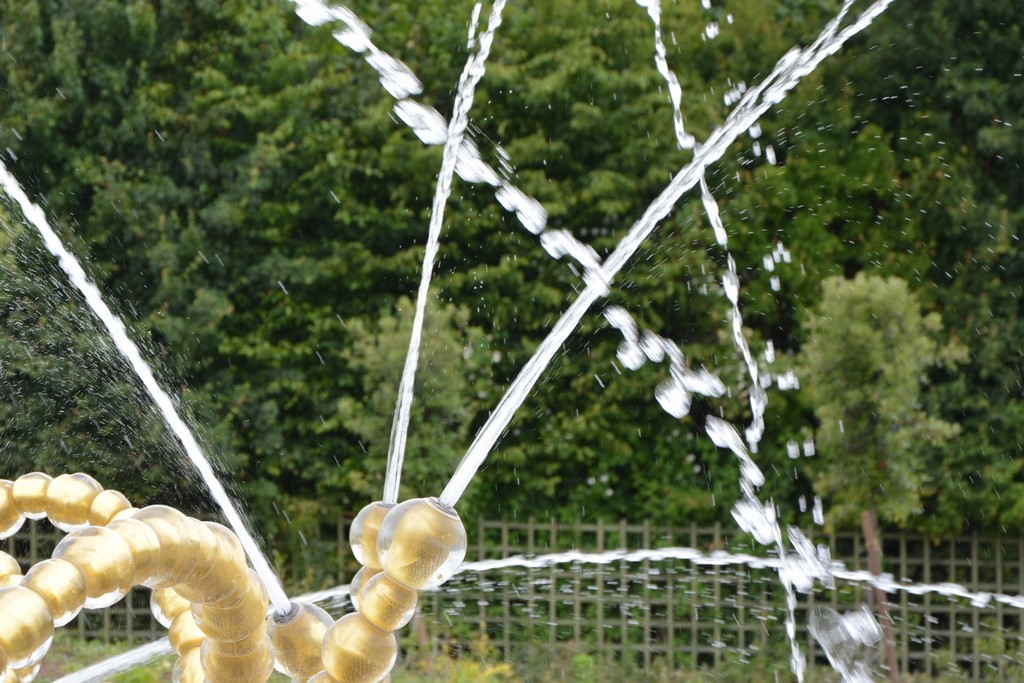 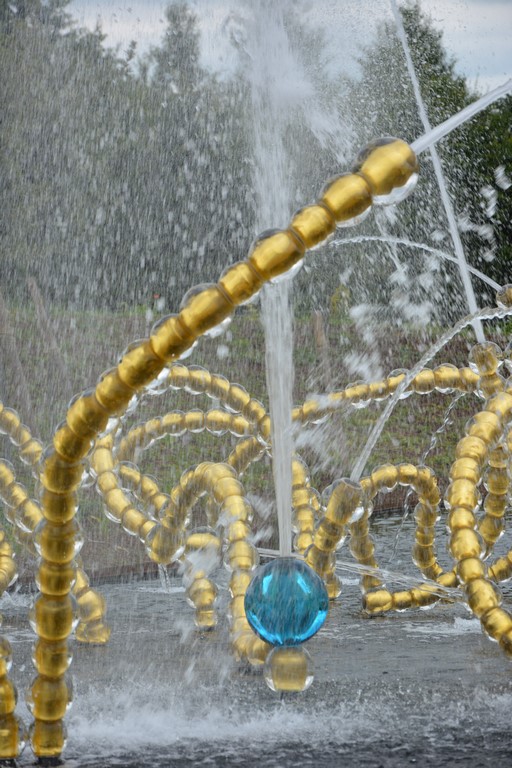 In this instance, however, we stepped up and enhanced the usual RGBW (red/green/blue/white) diode array with our High-Fidelity LED technology. These LED lights are capable of near-infinite color customization with tangibly enhanced depth and intensity.

For Les Belles Dances in particular, LEA wanted and was able to produce a highly specific combination of gold and white light to mimic and pay tribute to the historical splendor and predominant interior color scheme of the nearby Versailles palace.

As was mentioned above, both project phases are now complete, and we’re all proud of the extent to which our work, in combination with LEA and all of the other contractors and consultants who’ve played their parts in these grand undertakings, has helped restore these historic gardens and waterfeatures and enabled them to re-establish the glories of their heyday during the Sun King’s reign.

Visiting the estate may not involve as much an extravagance now as it did when Louis XIV and his guests whiled away the hours in his royal presence, but the nighttime shows featuring the new lighting scheme are scheduled to run every Saturday from June to September each year, giving visitors a rare opportunity to sample the gardens’ majesty with all the advantages offered by much better lighting programs than thousands of Louis’ candles could ever have provided.

We think he would approve.

David L’Heureux is co-owner and director of business development for Crystal Fountains, a supply/design company based in Toronto. A graduate of Seneca College and a 35-year veteran of the fountain industry, he has experience on all levels of educating and supporting aquatic designers, landscape architects and builders, developing custom solutions for a wide variety of projects from residential waterfeatures to major metropolitan fountains. He has been involved in many high-profile projects through the years, including the Crown Fountain in Chicago and the sequencing waterfeature at Cairo Festival City in Egypt. For more information, please visit www.crystalfountains.com.