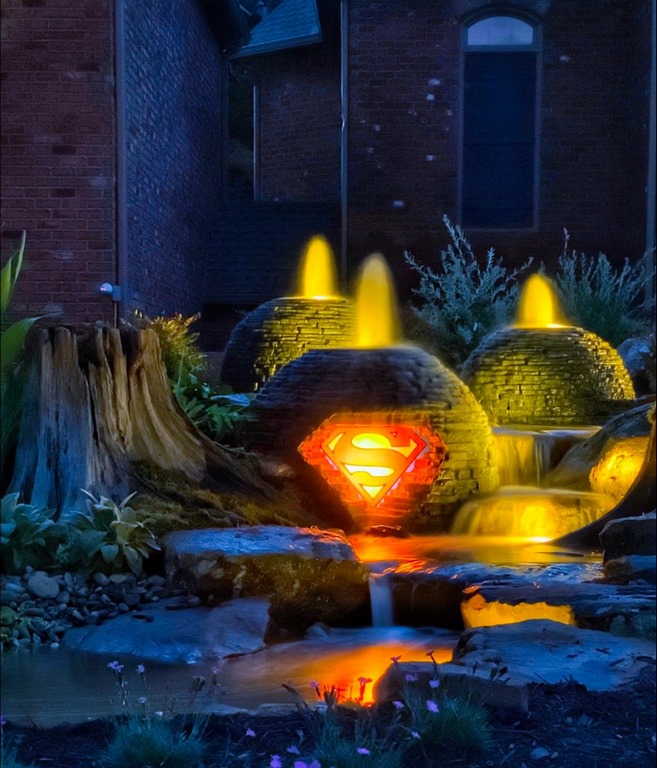 It was the kind of opportunity that doesn’t come along very often. This past Memorial Day weekend, members of the Aquascape family had the pleasure of installing a sprawling stream and pond system for none other than NBA Hall of Famer and four-time NBA champion, Shaquille O’Neal.

A team of Aquascape Inc. employees and “Artists of the Year” came together to create a bucolic 22-by-50-foot ecosystem pond with a 70-foot stream for “the big man” on his sprawling 80-acre Atlanta-area home.

Our talented project team collaborated on the installation of the pond with all sorts of input on a variety of our signature details. It was a great opportunity to show what we could do.

The whole thing was one big adventure that brought out our collective best for not only the biggest human being I’ve ever met, but also a man with an equally big heart. Now he has an aquatic space worthy of his towering persona and stature.

As is so often the case, the project came about purely by chance. We have a contractor in Orlando who would get his car washed at one of Shaq’s many businesses. The place is run by Shaq’s cousin and they would chat whenever he got his car washed, eventually becoming friends. At some point along the way, they discussed the idea that Shaq should consider installing a pond on his property in Orlando. One thing led to another and it wasn’t long before my co-conspirator in all things aquatic, Ed Beaulieau, and I flew down to visit Shaq’s 57.000 square-foot Florida estate.

As it turned out, Shaq didn’t make the meeting because he’s a really busy guy, but we designed a pond anyway and sent it to his manager. Shaq loved what we came up with and was ready to go ahead with the project. But shortly thereafter he got into a dispute with the homeowner’s association (over his plans to build a go-cart track on the property, which were deemed unacceptable) and he decided not to build anything else there. So, the whole thing was canceled. I was pretty bummed.

A few weeks later, we heard back from Shaq’s manager saying that he wanted to install a pond system at his home in Atlanta instead. Excited it might be back on; I headed down to Georgia to check out the 80-acre property. Shaq FaceTimed with us about the project. Shaq and his manager had watched some of our videos and knew what we are capable of doing. Having done their homework, they and pretty much gave us carte blanche from that point forward.

I did a design that same day, and the rest is history of which I am happy to share!

I’ve always enjoyed the design process because it’s fun to visualize what the environment will look like when it’s finished. One of the many great things about the pond-installation process is that when you get all the materials on site, especially with talented people, you can easily make adjustments to the design. It’s a highly creative and almost improvisational process. 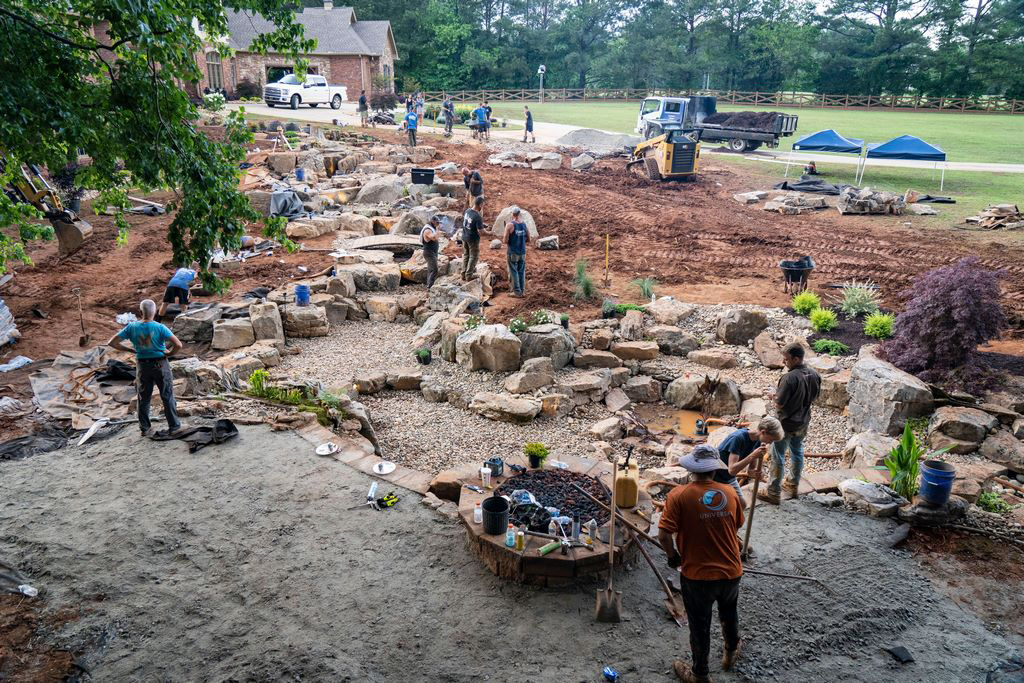 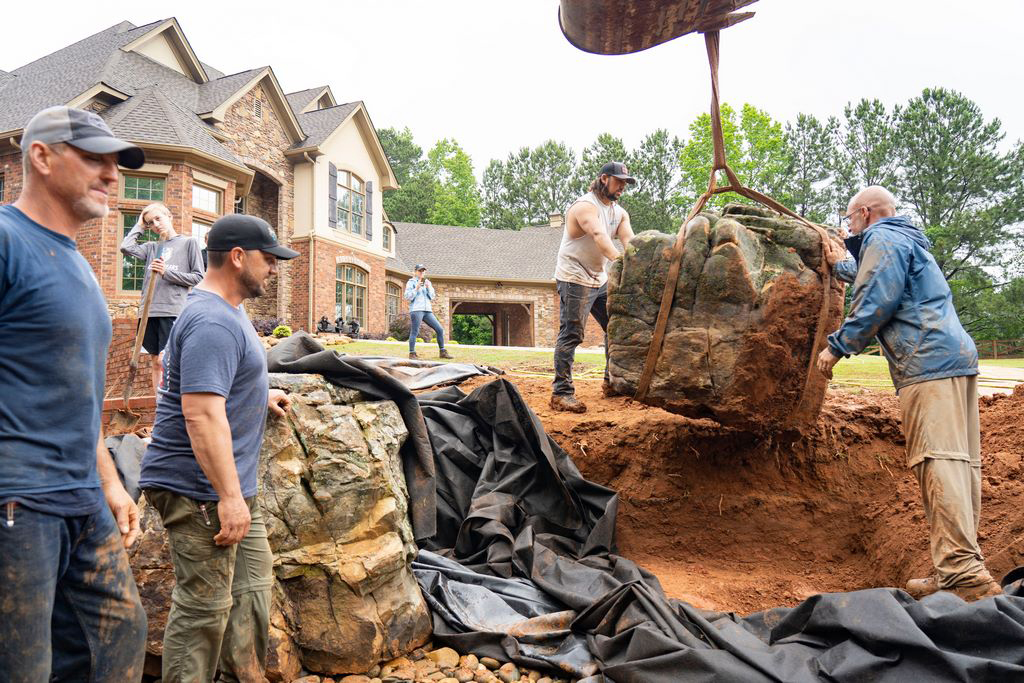 In other words, I knew the design would change. When we assembled on property, the first and biggest change was to move the headwaters closer to the front door. The shift in location meant that anyone entering or leaving through the main entrance is in immediate proximity to the water with downhill views of the entire feature, and experience the beautiful sound of moving water. There were numerous other adjustments throughout the process, all of which improved either the appearance or functionality of the system.

Working on the project was a perk for this talented group, who knew could get the project done in three days. When we first put out the word to our network of contractors dealers, we had hundreds of inquires. It seemed like they all wanted to be involved, but we didn’t need 300 hundred people, just 20 that were fully dedicated to the craft.(See the sidebar below for the full project team roster.)

They are all leaders with tons of great ideas and vast experience. We didn’t really have any kind of orchestrated game plan as to who would work on what part of the system, but instead it just kind of flowed naturally where everyone gravitated to the different areas they wanted to work on.

We had a great time together with lots of banter and a free flow of ideas. No one’s ego got in the way and everyone stayed upbeat, even though it rained intermittently over the weekend. Everyone did what was needed, despite the weather. 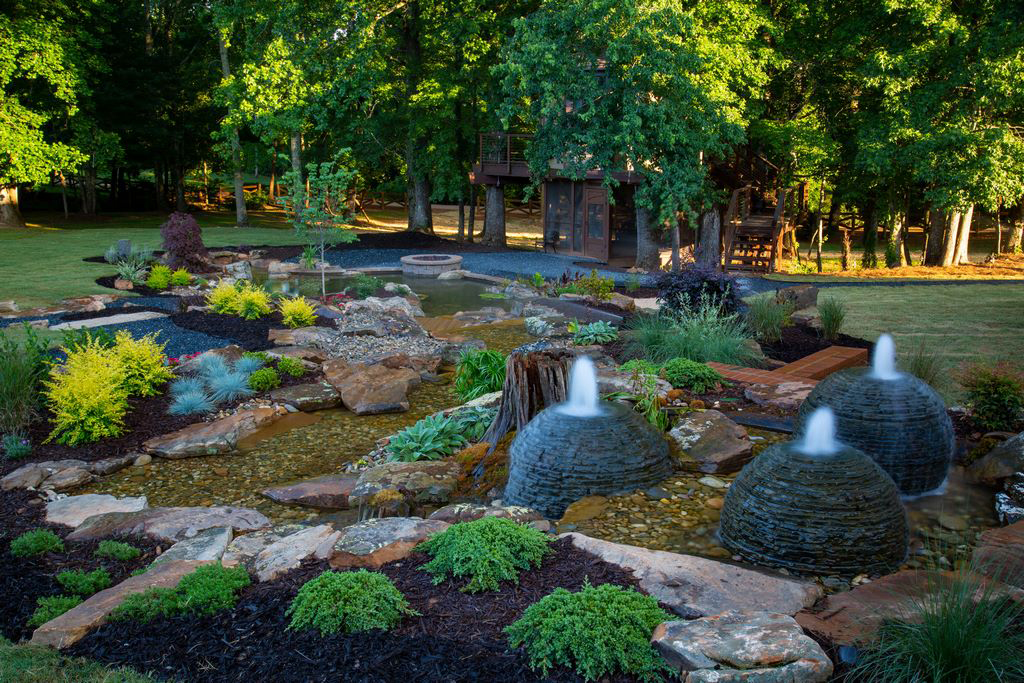 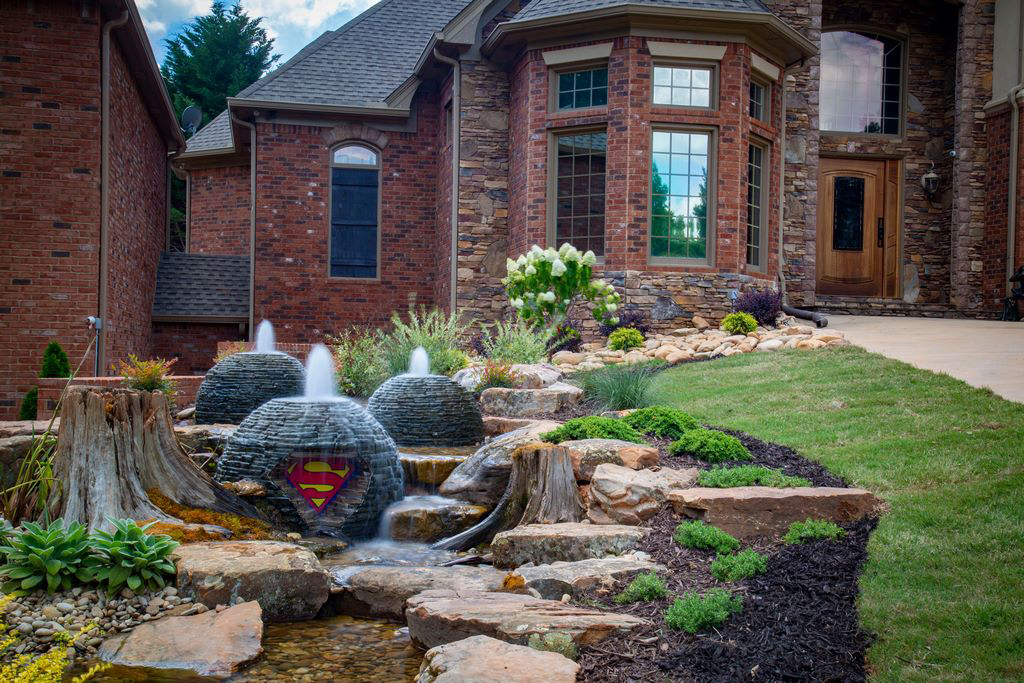 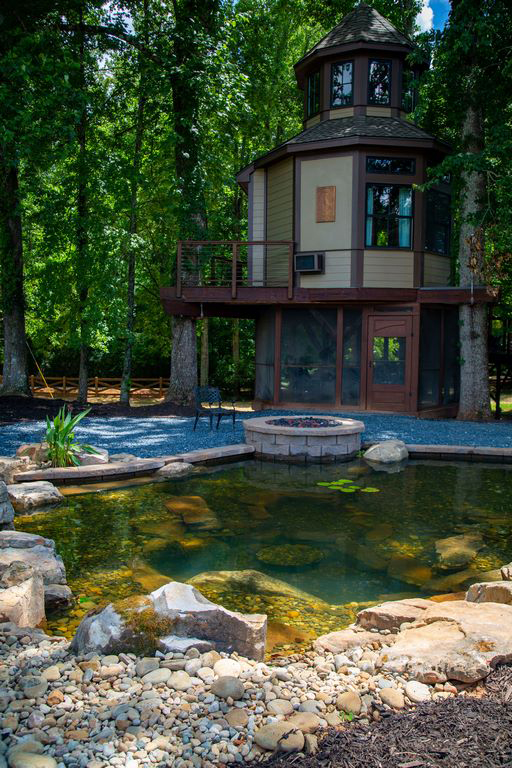 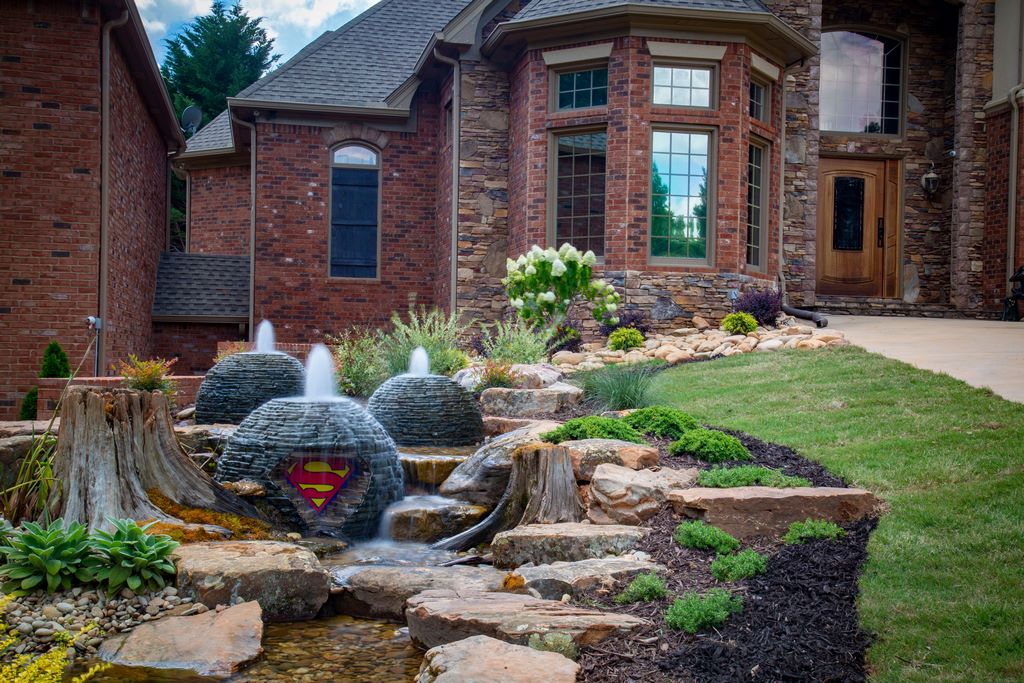 When you get going on a build with this many accomplished artists, it’s amazing how quickly it comes together. Excavation, for example, only took about 90 minutes. Start to finish; we shared a singular goal in mind, to build a one-of-a-kind creation worthy of the front entrance way for the family compound of the man, the myth, and the legend himself.

We were working in a sprawling lawn area, technically speaking the front lawn, which gave us a perfect canvas, with plenty of room for materials and equipment without everyone stepping on each other.

We had a five-foot vertical transition top to bottom, which gave us an opportunity to create a beautiful waterfall, which feeds an equally gorgeous cascading stream meandering downhill to the pond, which is right next to a large three-story tree house that had been recently installed by the team from the Animal Planet series, The Tree House Master.

The project specs are impressive with: 85-tons of moss rock and 35-tons of river rock. The pond is three feet deep and pushes 25,000 gallons of water per hour.

Tree houses are always interesting and Shaq’s is unusual because it has a ground floor. That’s where Shaq wanted create a lounging area by the water for family and friends. We had learned that Shaq loves spending time on the deck by his pool in the backyard because he likes looking out over bodies of water. Now he’s making his main outdoor living area in this brand new space with intimate views of the pond and the stream beyond. 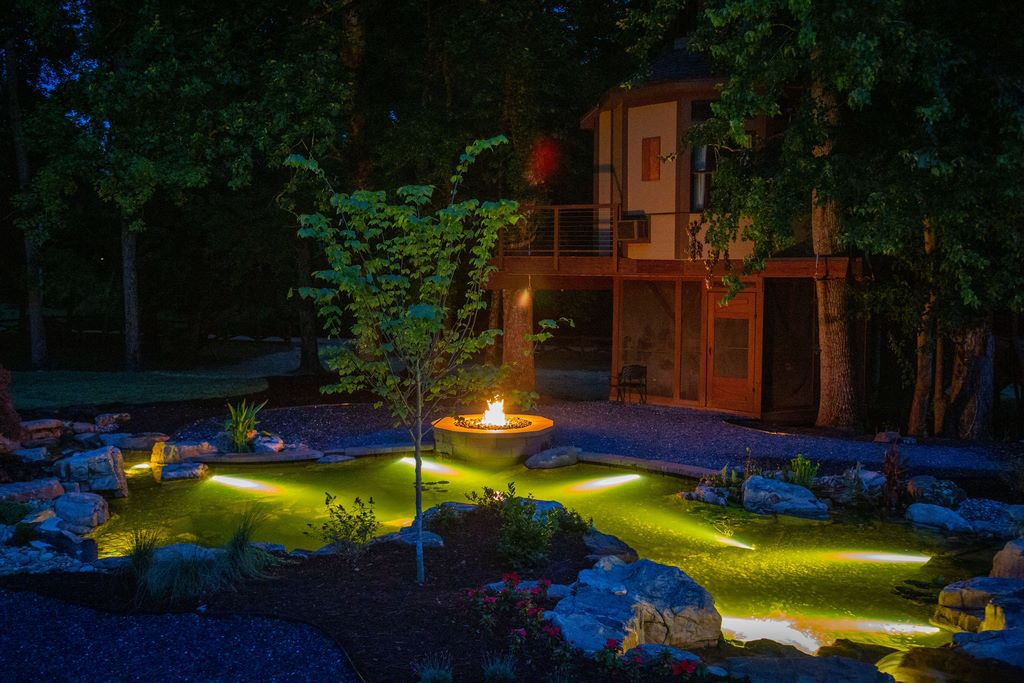 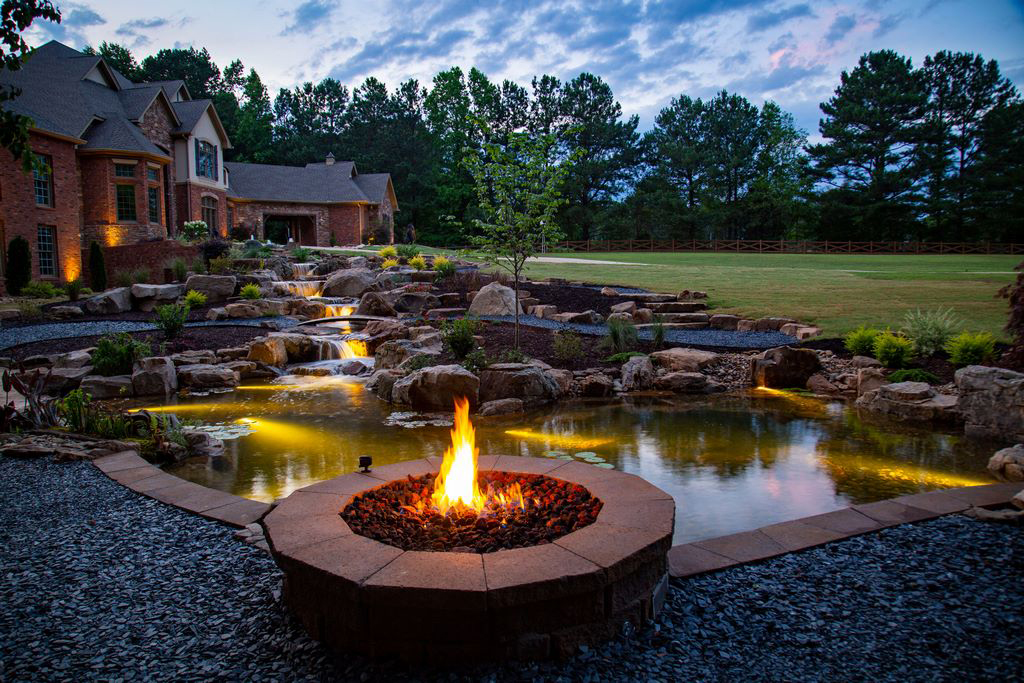 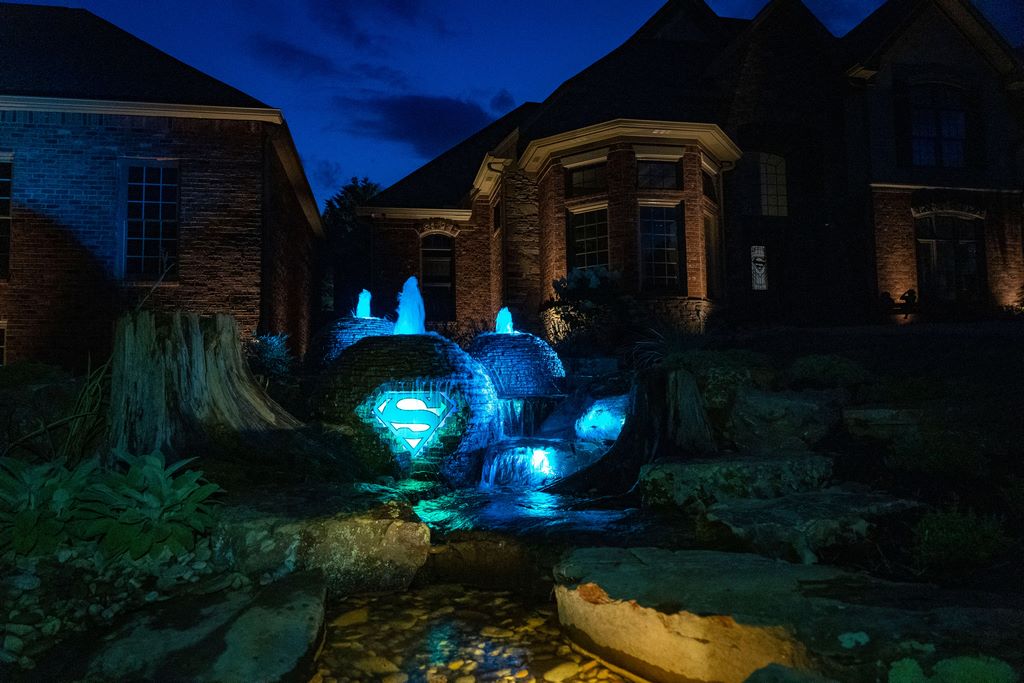 The tree house had been kind of isolated and distant from the main house, but now with the pond and the new lounge area, there’s a reason to go down there. We built a path around the pond up to the house, making it easy for Shaq’s mother to walk down to the tree house.

In effect, the water feature connects the tree house and lounge to the house. The path takes you across a bridge about halfway down the stream, bringing you close to the babbling water. It’s a really nice short walk.

When you arrive at the tree house, there’s a fire pit on edge of deck that is halfway in the pond, one of my own design ideas that survived the process. Now you can sit by the fire and look over the water with views of the stream leading up to the house. That section of the pond has a hardscape edge formed by a small retaining wall, where you can sit, dangle your feet in the water and watch as the fish come right up to you.

With large projects like this, especially those that are next to trees, a skimmer would be overwhelmed with leaves and debris, especially in the fall. On projects with large surface areas, we custom design what we call an “intake bay.” It consists of four main parts: the Snorkel, which is the vault that contains two pumps; the Centipede, which dispenses the water to the pumps; AquaBlox, which are like milk cartons that create space in the intake bay; and the pumps themselves. On this system we had two Snorkels for a total of four pumps, twelve AquaBlox with rocks and gravel on top.

We also like to create wetlands filter areas where we harness nature’s water purification processes, which we consider the heart of the system. Instead of locating the area at the top of the system as we often do, this time we made it part of the stream. One of the pumps discharges into the bottom of the filter area, where natural processes purify the water by removing organic compounds and controlling bacteria.

Finally, the system includes three Stacked Slate Sphere fountains flowing into the waterfalls and stream. One fountain sports a Superman symbol as homage to one of Shaq’s many nicknames.

Shaq is well known for his sense of humor and warmth, and we discovered it’s not just when he’s in front of the camera. He’s genuine guy and was great to work with. We are both kids at heart and it was gracious of him to talk with one of our contractor’s sons who plays high school basketball. He always gravitates toward kids. 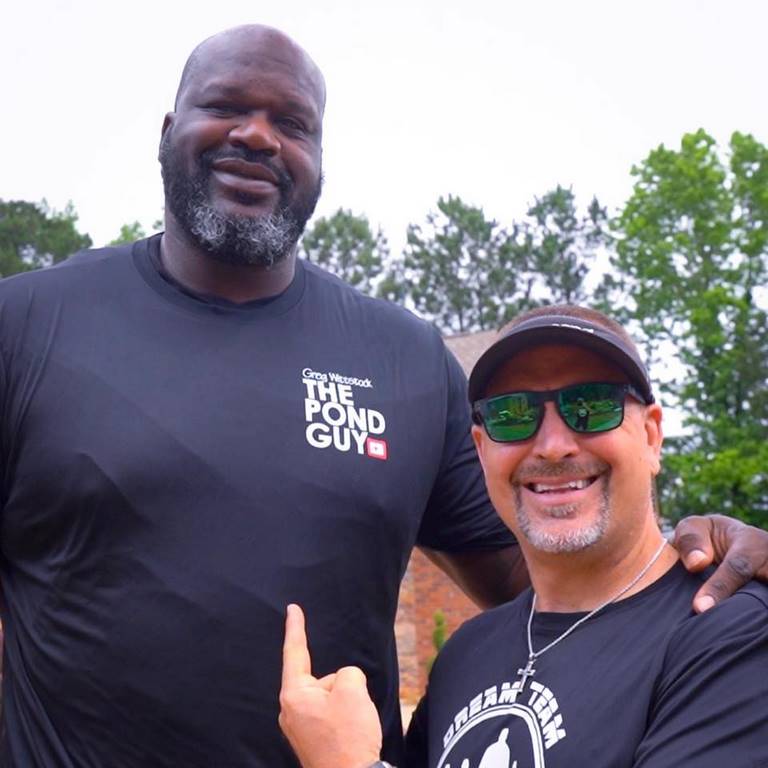 It’s interesting to note that the one area Shaq was concerned about when he saw it for the first time was the safety and health of the fish. He wanted to know all about feeding them and keeping them safe from predators. I assured him we give fish places to shelter from birds and other predators and they would be well cared for.

When he saw it for the first time Shaq said, “It’s amazing. I’m not a crier but if I was, I’d cry. I’ve built a lot of projects, worked with a lot of teams, but I never saw a team work through worse conditions. You guys rock!” I took that as a huge compliment coming from a guy who has been on some pretty darn good teams.

Since posting the YouTube videos of the install, we’ve drawn 7-million views and the reveal video was the number 19 YouTube video in the world on the day it came out!

One final note, Shaq is currently building go-cart track at his Atlanta home, not far from his newly installed “aquascape.”

Greg Wittstock, The Pond Guy, is owner and CEO of Aquascape, Inc. He has been dabbling in water gardens since the age of 12 and has a love of everything water and turtles. He founded the company in 1991 based on a business model that includes a mix of distribution, retail sales and installation services. He is a sought-after speaker on topics ranging from water gardening to business success and strategy. His personal motto is “carpe diem.”