This story starts with a tree falling in the forest.

It wasn’t just any tree: It was a huge locust that had stood next to what is now my driveway for years beyond reckoning, and when it came down it did its best to take a tangle of utility lines with it.

I wasn’t there when all of this happened, but I returned soon thereafter and saw the lingering effects: The utility companies had done a wonderful job of cutting away portions of the tree that had fallen onto the wires and had effectively cleared the road, but the rest was left to me – including the root ball of the tree and a huge trunk draped across my driveway.

Many of my projects at Liquid Designz (Washington Township, N.J.) involve creating sculptural elements to go along with our ponds, streams, fountains and waterfeatures, so none of the wood we cut into big pieces will go to waste. But the driveway provides access not only to my home, but also to my business, and the collapsing tree had made a mess of my roadside signage.

There was much to be done, and it needed to happen quickly.

GERM OF AN IDEA

But let’s back up a bit and set some important context: Several months before the tree toppled, I’d been contacted by a major hospital complex about providing a water element for a serenity/wellness garden that administrators wanted to include as an element of a new hospice/memory-care center.

The extensive garden space was to be set at some distance from the hospital in a large, open field that was part of its 26-acre property. Beyond that field was a beautiful protected wetland area. The request was for me to come up with something that would have enough presence that it would capture everyone’s attention from afar and draw patients, visitors and staff out for refreshing relief from daily concerns.

I’d worked on projects for this hospital on several occasions in the past and was familiar with both the tastes and ambitions of the chief executive officer. When he told me what he was thinking, I asked: “Do you want the Disney version? Or the Six Flags model?” He opted for the former and I began to work on the idea.

Some time ago, I had spotted an online photograph of a waterfeature in New Guinea. There was no depth of information about it, just an image of a large, flat boulder seemingly held in midair by a gusher of water. I liked the way it looked and had filed it away for future consideration. Now, I figured, the time was ripe to implement my own version of the idea. Scale would be an issue, because whatever waterfeature I developed had to be visible and interesting from a fair distance. So I started thinking about a big rock, a huge supporting column and substantial flows of water and came up with a rudimentary plan. I ran it by my friend the CEO, and he approved of the concept even though I had nothing more to go on than my conviction it could be done. He called it his “miracle fountain” and told me he was confident I’d make it work.

I knew I would need logistical and tactical help, so I communicated with some colleagues who were as intrigued as I was about the concept. Before long, we were ready to go.

In the meantime, work had begun in clearing and grading the site. We’d moved well into installing the 10,000-gallon basin for the waterfeature when all sorts of red flags began flying: The hospital is located in Bergen County – an affluent place within easy reach of New York City – and the activity on the open site, begun without proper county clearances despite approval from the hospital’s administration, turned out to be in violation of all sorts of wetland-related environmental rules. We were ordered to cease and desist – and did so immediately.

So a great fountain idea was sidetracked – until, that is, Mother Nature made a mess of my driveway.

As I mentioned just above, the waterfeature had moved far enough along that I’d lined up the sort of support I would have needed to complete the job – and everyone who’d gotten involved was still keen on the idea. So I made the simple decision to scale the concept down for a new application and put up a smaller version of the waterfeature at the end of my driveway.

But I’d still never built anything like this and found no help in the photograph from New Guinea, so I did what all good watershapers must sometimes do and figured things out as I went along.

I started by selecting stones and found two beauties. This let me know the diameter of the jet array I’d need to set up in the base of the structure and put me to work. I started with rigid Schedule 80 PVC but gave up when I figured out I’d need the services of a fully equipped machine shop to get the jet alignments just right: The precision required to drill, tap and screw-mount the fittings was beyond anything we could do with hand-held tools.

So after some failures with a freehand approach, I shifted over to a 3-inch PVC flex hose and soon had the two manifolds I wanted, each covering about 90 degrees of the circle. (This 180-degree coverage was all I needed in this case because the waterfeature was to be angled toward the road and nobody but local deer and I would ever see the fountain’s backside.) We set up a 30-by-30-foot, 45-mil liner to establish the reservoir, then inserted an 18-inch-thick footing for the fountain. Next, we placed a stout basalt pillar into a socket we chipped into the footing, securing the pillar on four pins to lock it in place. We used a small loader to lash the stone pillar exactly where we wanted it, then pinned the top stone into place as well.

Once we installed the twin manifolds around the pillar, we started a pair of 1.5-horsepower pumps and saw that the water had the proper volume, but that it went every which way when it hit the irregular surface of the top stone’s bottom side and in no way created the effect we were after. To correct the situation, I attached a layer of dark, coarse pond-filter foam (from Matala USA, Laguna Hills, Calif.) to the underside of the top stone to absorb the energy of the jet action and control the degree of rebound that had ruined the effect in initial test runs.

It was the perfect solution: The rising jets saturated the foam and the water dropped back to the base of the pillar just as we’d hoped. Once we added lights to the composition, our work was basically done and my home and business now have a unique waterfeature to announce their place alongside the road.

The process of setting up this fountain was definitely a learning experience. If things had worked out differently and I had ended up building my first floating-rock fountain for the new hospice center, I am certain I would’ve contacted a machine shop to precision-craft the manifold out of copper and brass.

I also know that I’ll likely break down and purchase a drill press and some other precision tools if one of my residential clients wants something similar for his or her backyard in the future. The flex pipe works for me in my own driveway, but for a client, I think a more durable system with more reliable components would be the prudent call. 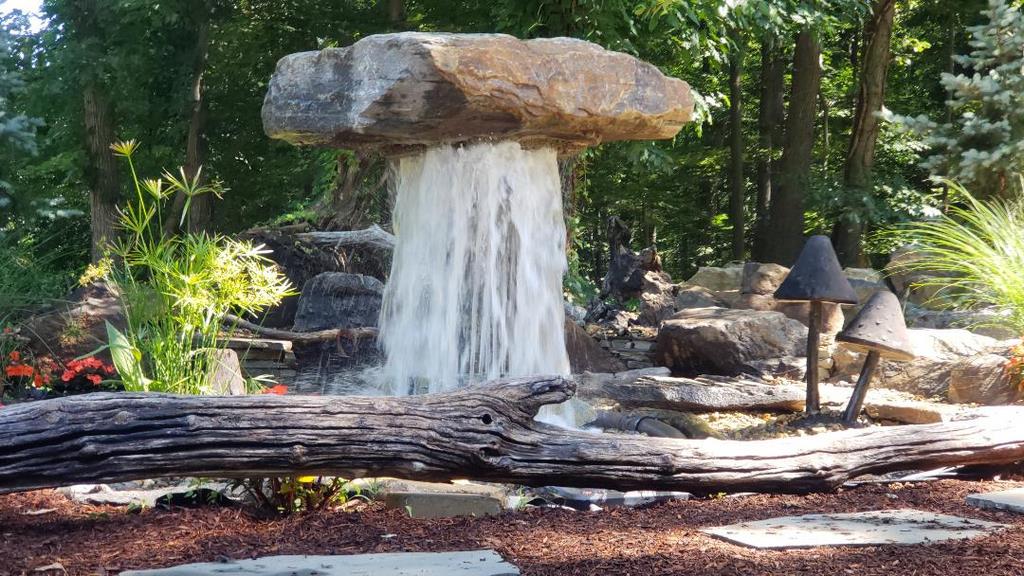 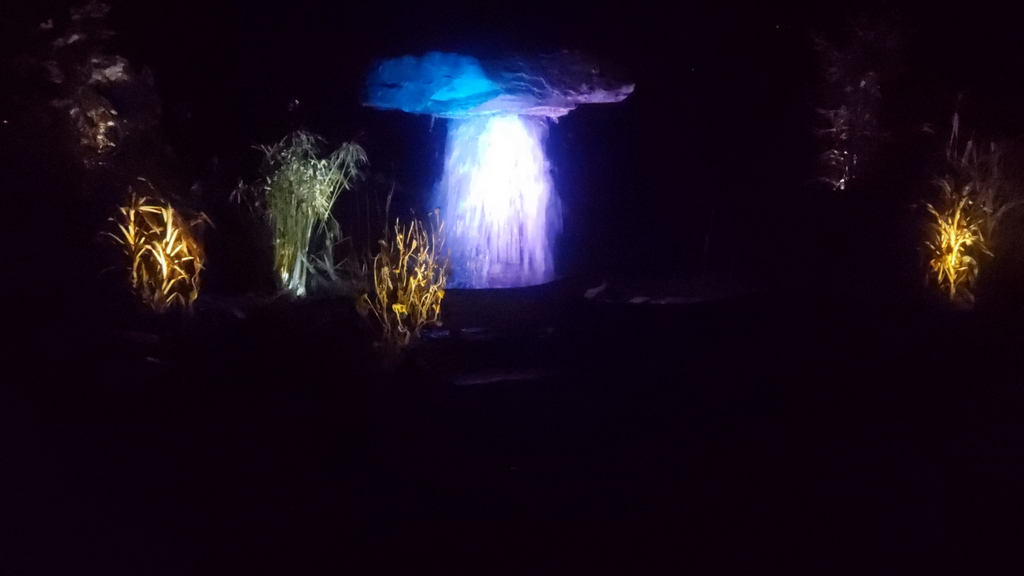 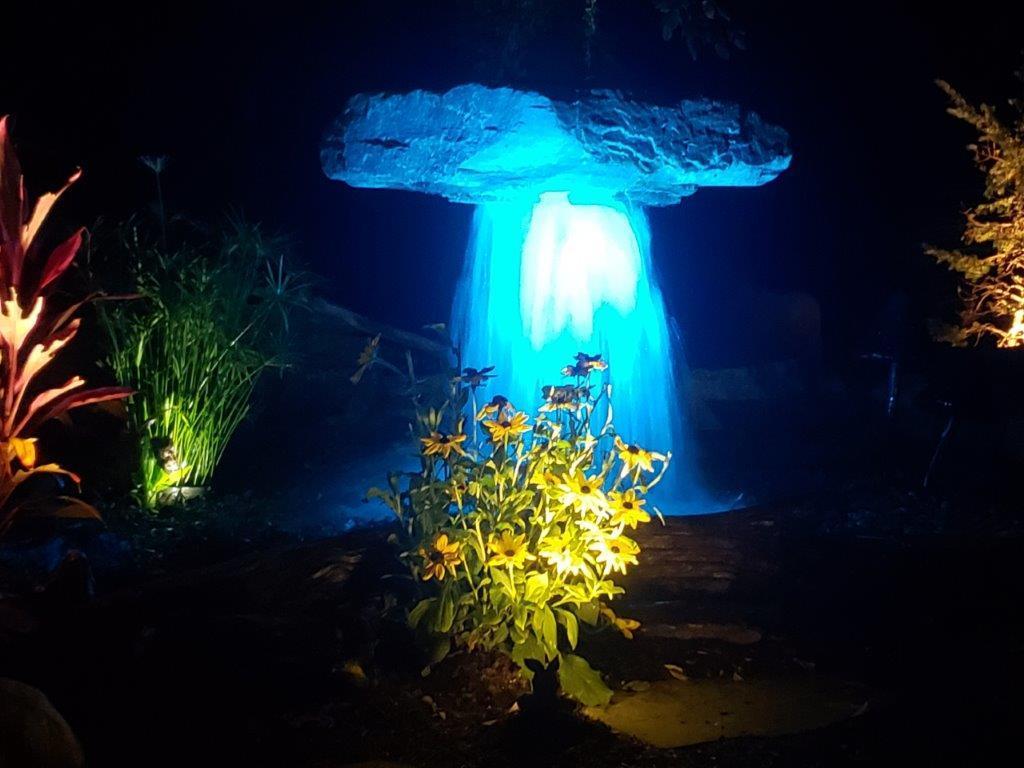 I have to say that the most fun I had in all of this was firing up the system for the first time and seeing just how much more I had to do before coming anywhere close to a finished product. Fortunately, I’ve put together enough waterfall systems through the years to know how to deflect flowing water when I’ve pushed it past its usual job description.

As for the contractors and the machines they used in helping me wrestle tons of stone into exact positions, they all had fun, too, and are looking forward to a day when the hospital revisits its plans, gives the city and county some proper respect and rolls out with a sublime, full-scale, Disney-style waterfeature for its serenity garden: We’ll all be ready!

And in the meantime, the waterfeature has been great for my business: Name recognition is up, and lots of clients and prospects have told me that the new fountain is what’s prompted them to reach out to me. I couldn’t be prouder or happier.

To see a brief video of the fountain in operation by day, click here. By night, click here.

Jerry Romano is founder and owner of Liquid Designz, a specialist in ponds, watefeatures and unique aquatic designs based in Washington township, N.J. Romano has a bachelors degree in business administration from Montclair State University and may be reached through his website: https://liquiddesignznj.com.