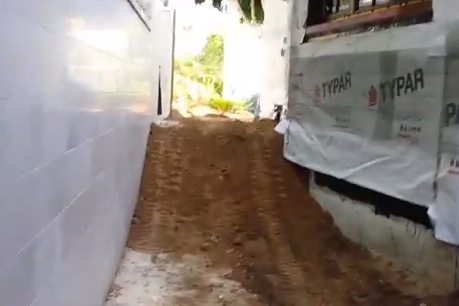 It’s been a while since I shared a video with you through WaterShapes.com, but it occurred to me (even after a good, long gap) that this one fit perfectly into the series we once offered on the subject of site access and the ways equipment and the products of demolition and construction can be moved from place to place under even the most challenging of circumstances.

The sidebar below will point you to other entries in the series, which originally ran in this WaterShapes EXTRA newsletter from May through October 2012. Give them a look if you want to set a context.

But now for the matter at hand: This is a case where we had to move a whole lot of equipment and material back and forth from the job site to the street and vice versa. As I mention in the video, the entirety of the existing pool and deck was to be removed – including a huge mass of gravel that had been used to fill the pool when the watershape was topped by decking at some point in its history. We’re talking literally tons of material in a demolition process for which we conservatively allowed eight to ten days.

Access was possible, but as you’ll see, just barely. All we had to work with was a narrow strip along one side of the house that dropped down several feet across two flights of stairs. This space was to be preserved, including the beautiful polished-stone wall, but clearances were measured in mere fractions of inches.

To prepare the way, we covered the stairs in dirt and compacted it as fully as we could to create a stable base. But the clearances were so narrow that we couldn’t effectively drape the walls to protect them from dings that might be inflicted by errant Bobcats.

Suffice it to say that our conversations on site referred frequently to how tight the space was and how important it would be to take unusual care in motoring up and down the passageway. Ultimately, we made it all happen and gained valuable experience in making the absolute most of limited access.

To see the site, its constraints and our solution, click here.

Randy Beard operates Pure Water Pools, a construction/service firm based in Costa Mesa, Calif. He may be reached at [email protected].