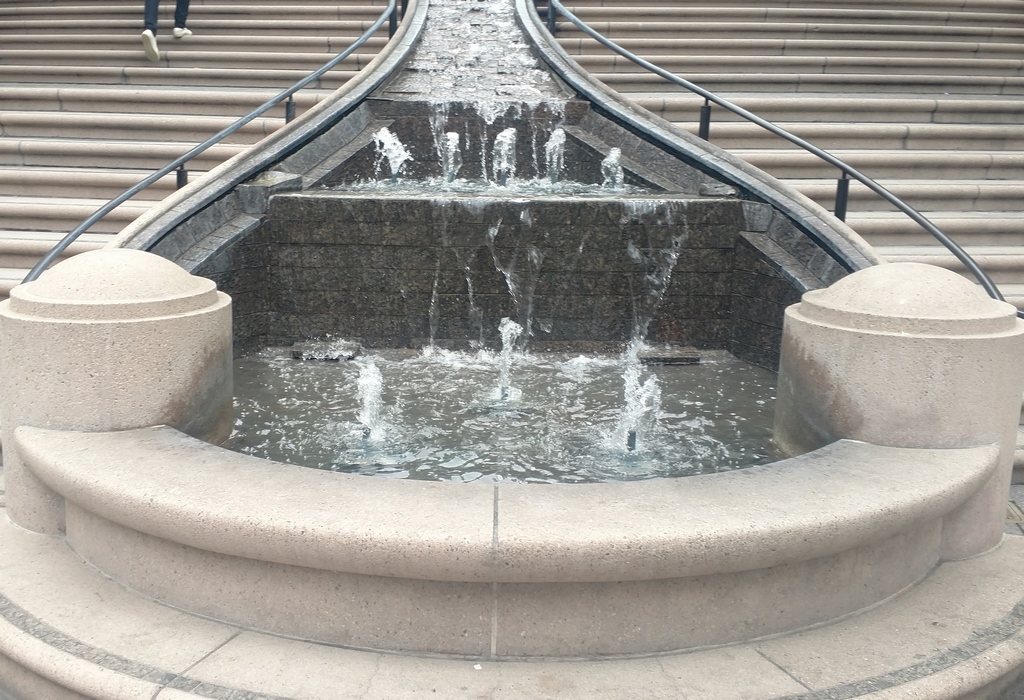 As you’ve probably noticed by now, I’m a big fan of Lawrence Halprin’s work. I’ve probably covered a half-dozen of his projects in Travelogues through the past eight years, and I can easily see myself covering a half-dozen more in installments to come.

Halprin is perhaps best known for the muscular, rough-hewn stonework that highlights not only the FDR Memorial in Washington, D.C., but also the Ira Keller Fountain in Portland, Ore. Yet his output also featured elegance and a sense of architectural history – qualities very much on display in downtown Los Angeles with the fountain/cascade complex devised by landscape architect Halprin to accompany architect I.M. Pei’s Bunker Hill Steps.

It seems logical to start at the top of such a waterfeature with the water’s source and then move down to the base, but it’s long been my observation that the visuals are typically better when you start at the bottom and move up. 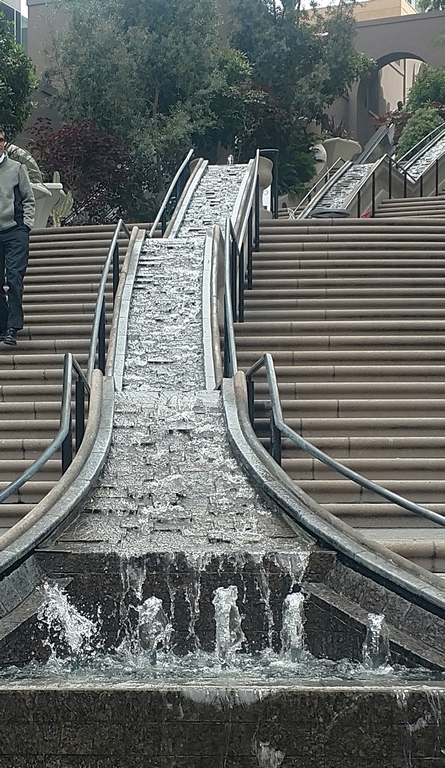 I’m particularly happy to have started at the base of this composition, because there’s so much grandeur to the broad staircase itself that it’s easy to feel transported to Rome’s Spanish Steps or some of the more impressive stairways at, say, Hearst Castle: As you rise up through the system, a head-up, eyes-up perspective opens the view in ways that can’t be matched as you watch where you’re putting your feet in heading down the same dizzying string of steps.

The waterfeature bisects the stairway, so it’s always in view and offers soothing, low-key sounds along the way as the water burbles down to multiple landings where bubbling fountains maintain the sonic effect. And when you finally reach the top – breathing a bit more deeply for the effort – your eyes fall on a grotto and a small flow of water suggesting that there must be something more a few paces beyond. 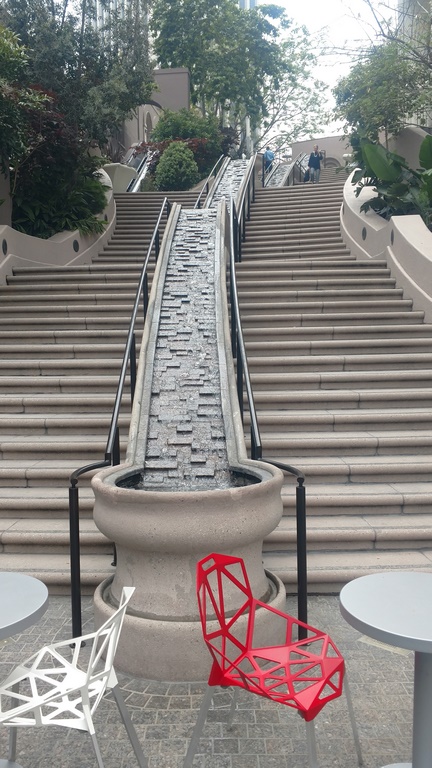 And indeed there is in the form of a large, secluded basin that flows toward the grotto and hosts a sculpture by Robert Graham – perhaps best known for the large sculptures of athletic nudes he prepared for the Los Angeles Coliseum in the runup to the 1984 Olympic Games. The Bunker Hill sculpture of a slender female form is called “The Source” and stands atop a pillar that releases water into the fountain system.

Across the street from the base of the system is Los Angeles’ Central Library, where Halprin had a hand in designing a garden space that includes similar historical references, including a glorious reminder of the weeping water wall at Villa d’Este. When I went to take photographs of that project a while ago, I had also hoped to shoot the Bunker Hill Steps but found they were undergoing what I assumed was a routine mechanical repair. 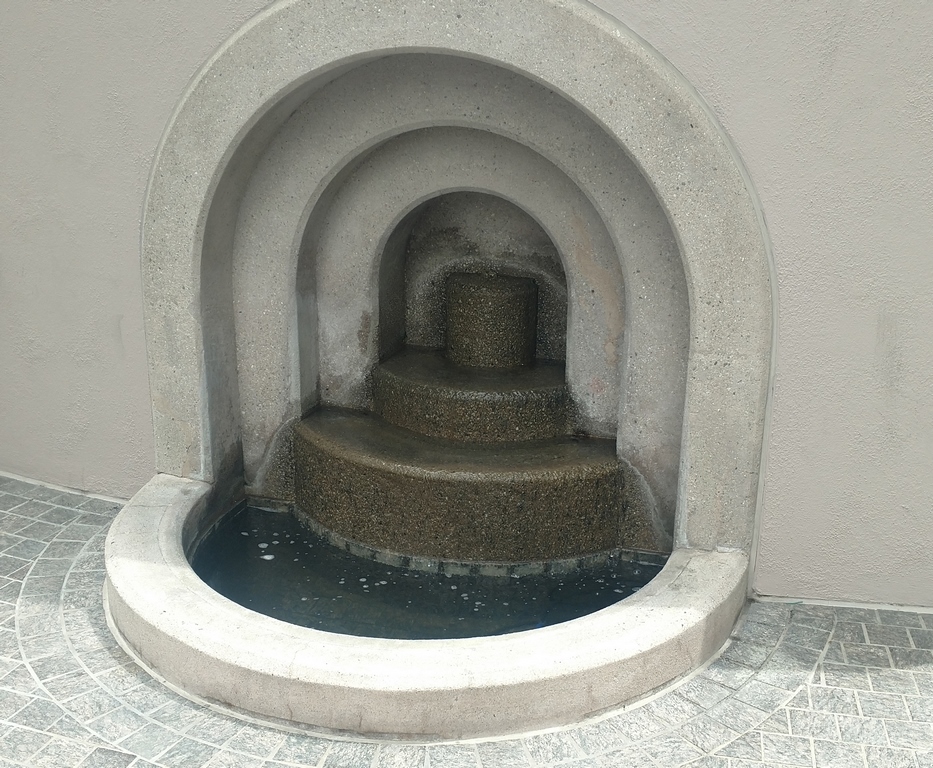 In revisiting the library recently, I noticed that the Bunker Hill Steps were back in business and crossed the street to see what had transpired. I was rather shocked to see that the original chunky rocks that had lined the cascade’s runnel and framed the flow’s base had been replaced by ledger-type stones with irregular profiles and a flow that emptied into a less-dramatic basin. The cascade’s flow is still broken by the surfaces it traverses, but in my view the new treatment takes a good bit of the drama and sense of unpredictability out of the composition. 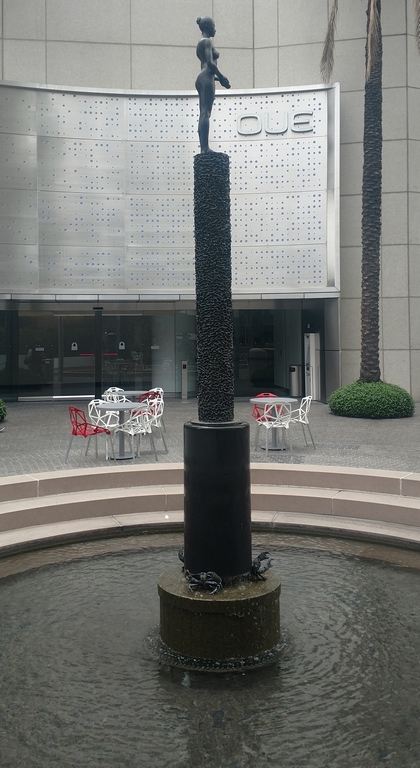 I think I understand why those in charge made the change, but I have to say I preferred the original look and the rugged contrast it offered to the formality of the grand stairway. The new approach might even be a clash in style and material when compared to the original’s open commentary on the wild spaces where urban water originates.

But no great matter: I still love the composition top to bottom and highly recommend a visit. And might it even be argued that the chiseled quality of the new stonework aligns the revision more directly with visual and physical qualities of Halprin’s most famous projects?

Two things to note: There’s an escalator that runs along the side of the stairway, so if you prefer walking down steps to walking up (or vice versa), there’s an easy option. Better yet, a short distance from the top of the steps is Angel’s Flight, a funicular rail system of local historic note. It’s a very short ride up or down the big hill, but it only costs a dollar and is a true oddity set amid the city’s skyscrapers.

Please do walk either up or down the Bunker Hill Steps if not both. It’s something to behold, and there’s a quirky little Belgian waffle/gelato establishment partway up the hill that’s always worth a pause.