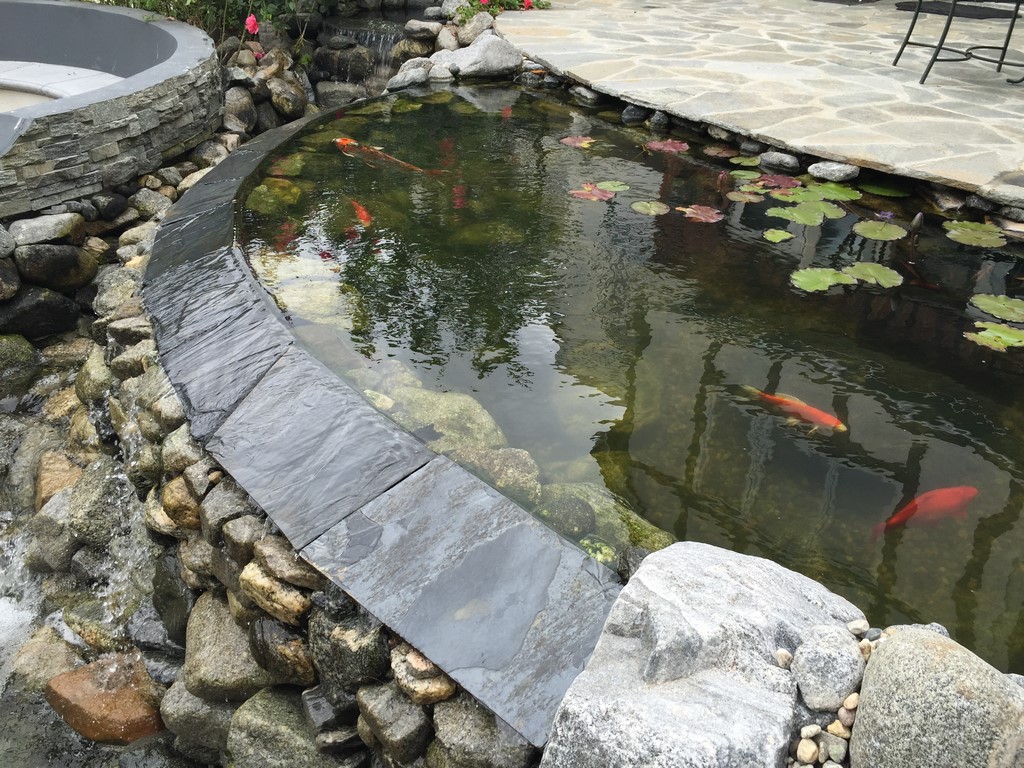 Given the choice, there are few projects I enjoy more than renovations: The process of taking an existing outdoor space that isn’t making people happy and coming to their rescue with a personalized dreamscape is about as satisfying as it gets.

This sort of shift in vision happens quite often when homes change hands and the new owners bring in a different set of needs and desires. In grand terms, there might be nothing particularly “wrong” with the original setting, but if the new owners either want to start over or make extensive changes, I’m more than ready to step in and get busy.

In this case, a couple in Beverly Hills, Calif., called me in to have a look at their sloping backyard. It was dominated by a full-sized basketball court hemmed in by an existing pool, a small pond and a limited swath of deck space. The couple had three young children and wanted more than anything to make their backyard into a place their kids and various friends would want to hang out.

So I asked the big question: “How many times have you played full-court basketball here?” My thought was that, if we could cut the court in half, we would have the space we’d need to make some serious revisions and create new outdoor “rooms” for everyone to enjoy. They agreed to the surgery and we were on our way.

What this all meant was that the pond would be the focus of a lot of our attention. It was too close to the back of the house to allow for enough upper-deck seating, and it was set up in such a way that it was just there, a rather unexciting patch of water that lacked a necessary sense of drama – a feature, not a destination.

The key change here was revamping the yard as two distinct levels separated by stairs rather than a slope traversed by a ramp. This allowed us to make a major change with the pond, setting it up on two levels with a vanishing-edge detail in between. The revision created a large reflecting surface on the upper level, added sound to the setting that made everything more comfortable while turning the lower level near the pond into a singularly attractive room of its own. 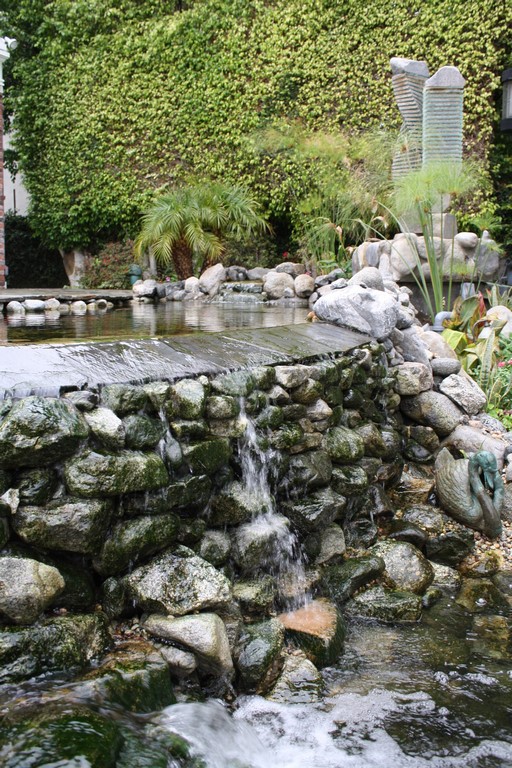 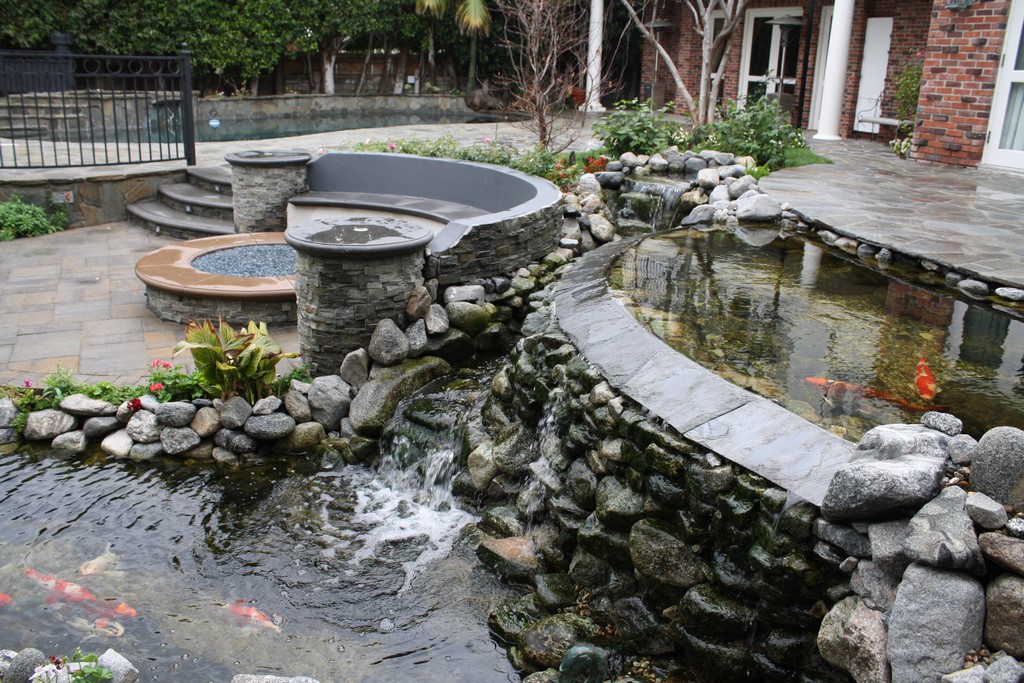 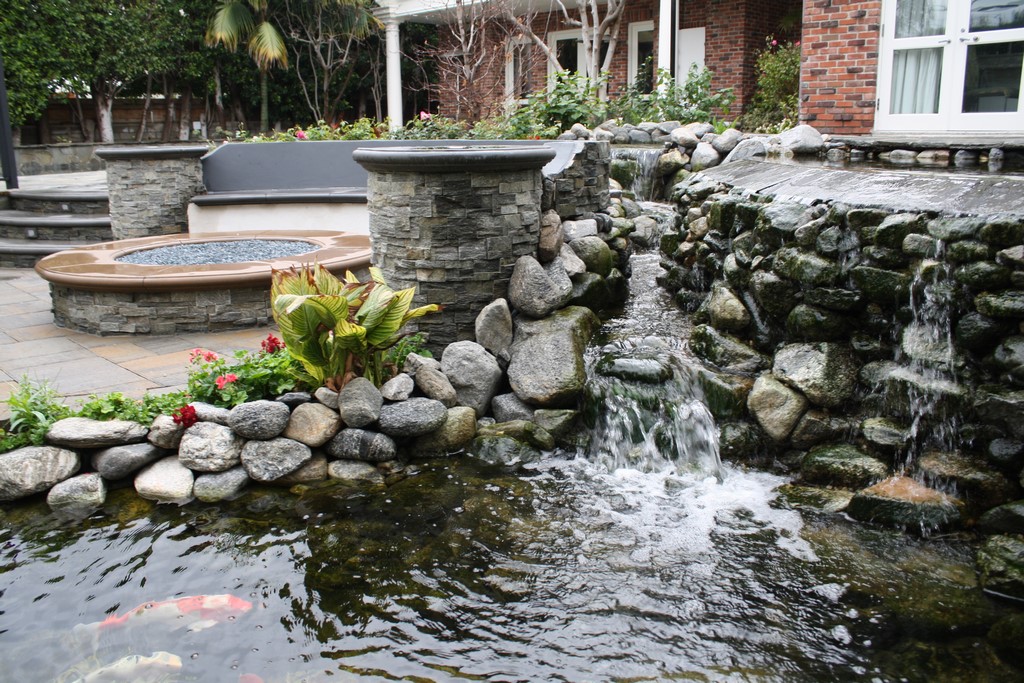 We at Green Scene Landscaping & Pools (Chatsworth, Calif.) have built many ponds through the years, but relatively few of them have specifically pursued a true vanishing-edge look. We’ve set up dozens of waterfalls over broad weirs, but most often these visual features face the house or the key vantage point to take advantage of the cascading-water visuals.

In this case, we turned things around and had the water flowing away from the upper deck – not a huge practical distinction, but one that altered the visual and aural dynamics of the entire setting.

Naturally, there are some points to consider in this approach. First, you need to be supremely aware of the presence of fish – in this case, large Koi – and make certain that the creatures in the upper pond can’t find their way into the lower pond by passing over the edge. Essentially for us, this meant turning our usual vanishing edge treatment around and having the weir fall away from the upper pool. 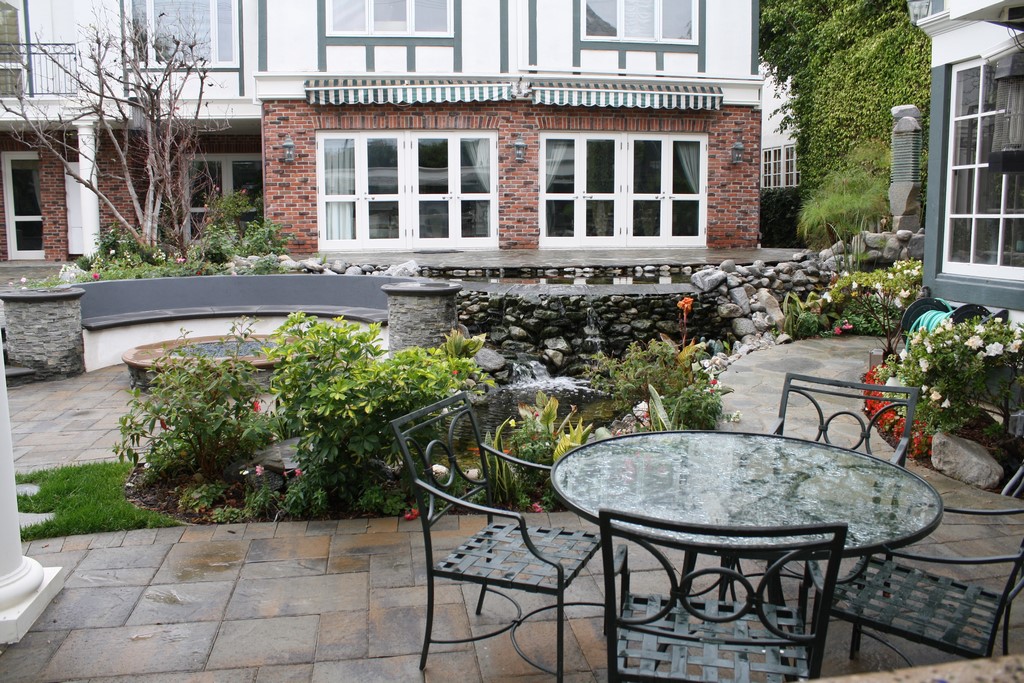 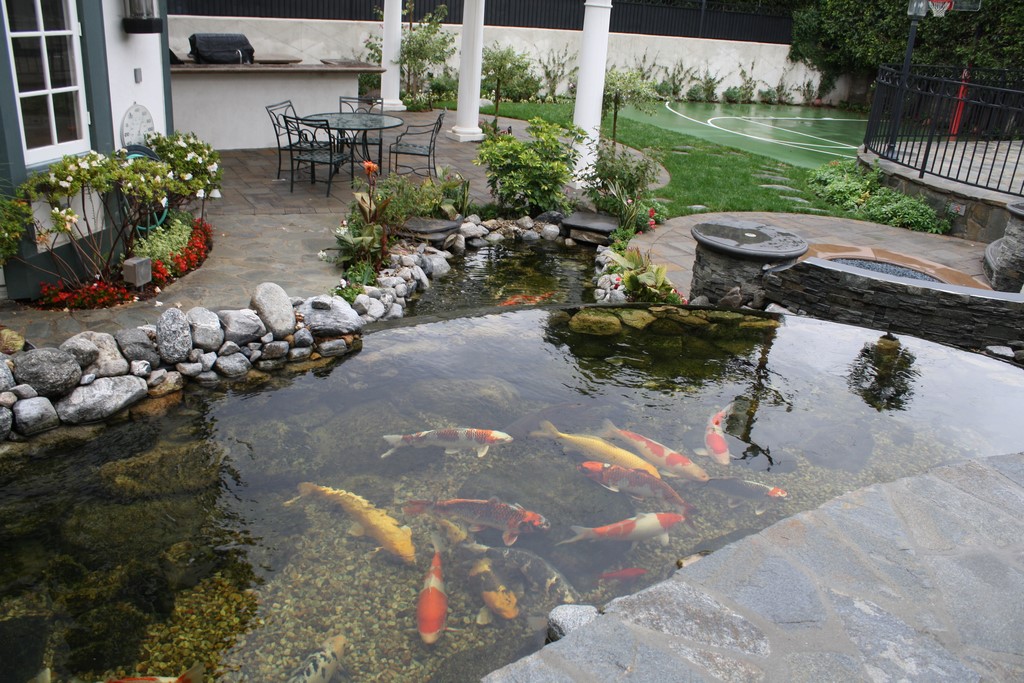 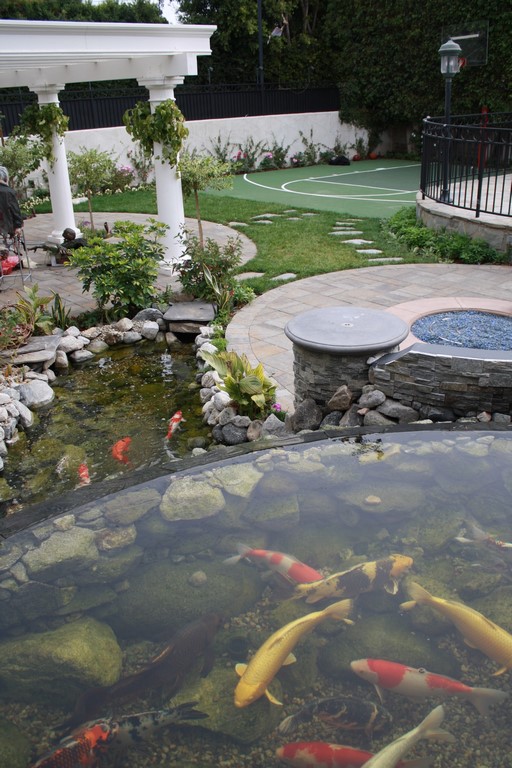 In addition, the fish in the lower pool must be isolated from suction points that draw water back to the upper pond. Fortunately and by design, specialty pond equipment takes care of this concern. All we had to do was calculate our flow rates and capacities to make certain the lower pond could accommodate the water in transit.

We also needed to double up on biofiltration systems, one on each level, because we knew the flow from upper pond to lower pond would never be sufficient to clear away top-level debris.

Great story: The completed pair of ponds was significantly larger than the original single pond, and the homeowners wanted more Koi. She’d heard that a neighbor was moving and wanted to sell off her collection of big, mature fish – so my clients were able to stock their ponds with great big fish at a hugely discounted cost.

Although revising the pond was the core of the backyard makeover, we also took advantage of the removal of half the basketball court to add a firepit with a nice seating area; a big, full-featured outdoor kitchen with a shade structure and ample seating; and new stairways leading down to the lower pond, the dining/entertainment area and the firepit. The stairs wrap around either side of the split-level pond, with the mood-altering sound of moving water reinforcing the transitions from room to room on the lower level.

On the upper level, repositioning the pond farther away from the house enabled us to increase the size of the upper deck substantially – with enough space left over to allow for the insertion of a large, vertical sculpture to one side.

The firepit is actually a key part of the new layout: Its seating doubles as the retaining wall separating the two levels and brings another crescent-shaped structure to a backyard that now has several of them working together harmoniously. The kitchen space is another dramatic addition: Its concrete countertops feature integrated fiberoptic lighting that brings a unique glow to the space when evening comes and the sense grows that gathering around the food-preparation area is a great idea. 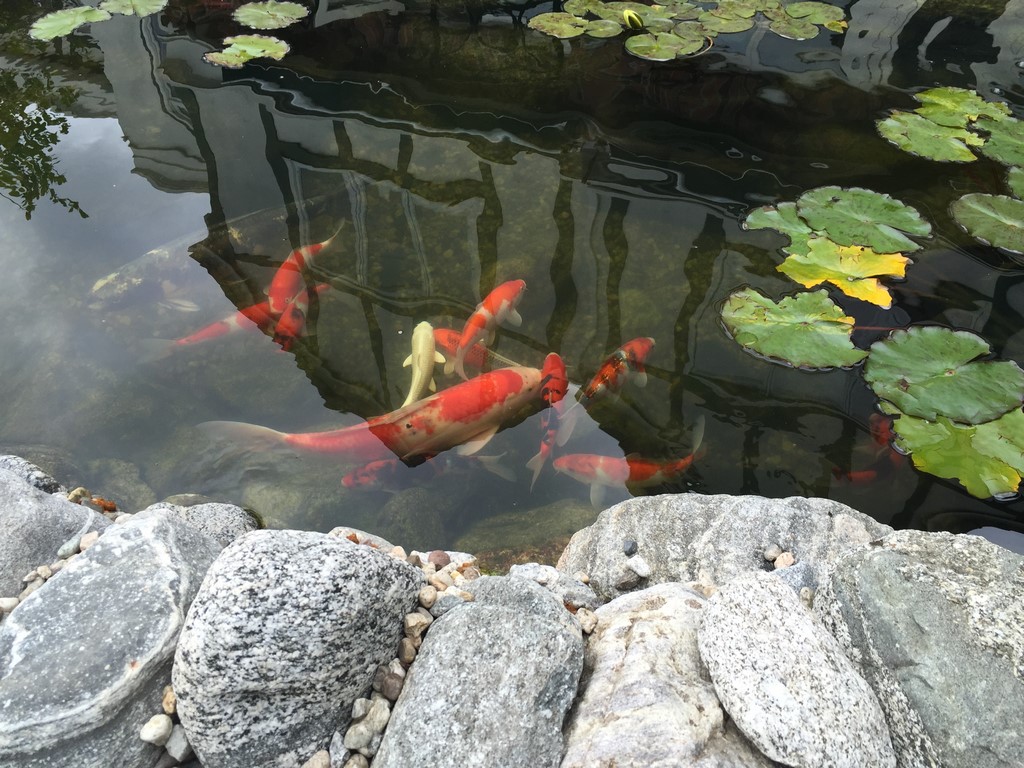 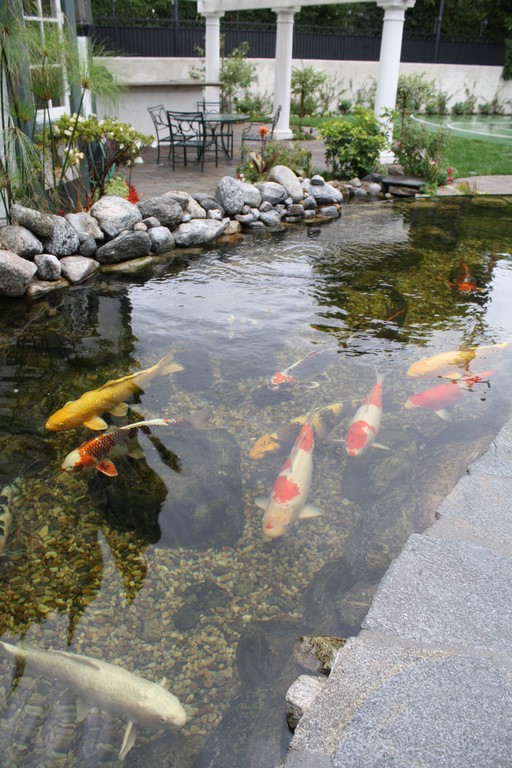 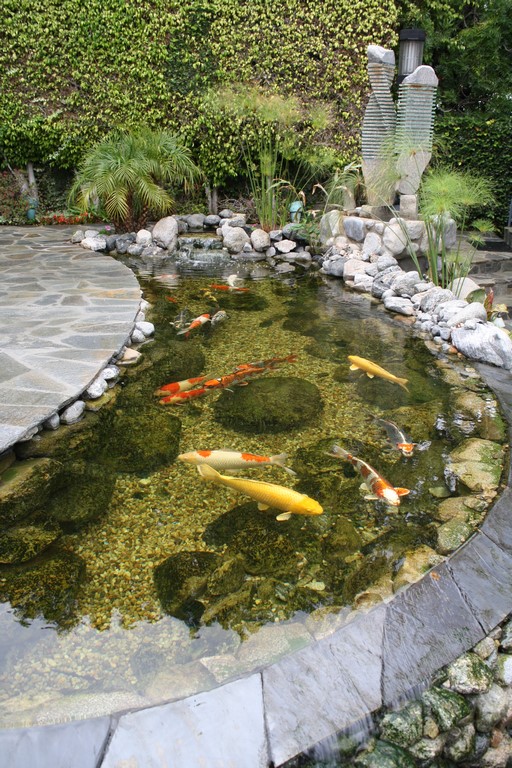 But the pond is the real scene-stealer. We set up the waterfall on the upper level with a minimal drop so that it would offer minimal disruption to the reflective surface. The water on the lower level is more “active” on the surface, with water flowing from both the vanishing edge and down a second waterfall/weir that falls into a stream flowing behind the firepit. The lower level also includes a large number of aquatic plants that help clarify the water and keep the fish safe and happy.

It’s a fabulous, engaging setting so different from the original that there’s really no comparison. Our clients are thrilled by the results, and so are their children and any guests invited to share the space.

All that, and there’s still half of a good, working basketball court!

Click here to see a brief video showing the pond system’s three waterfalls – and hear the wonderful sounds they make: It’s almost enough to drown out the leaf blower that tries to intrude!

Scott Cohen is president and supervising designer of The Green Scene, an outdoor design and construction firm based in Chatsworth, Calif. He provides consultation for clients nationwide and gives seminars on designing landscapes, swimming pools and outdoor kitchens. For more information, go to www.greenscenelandscape.com.