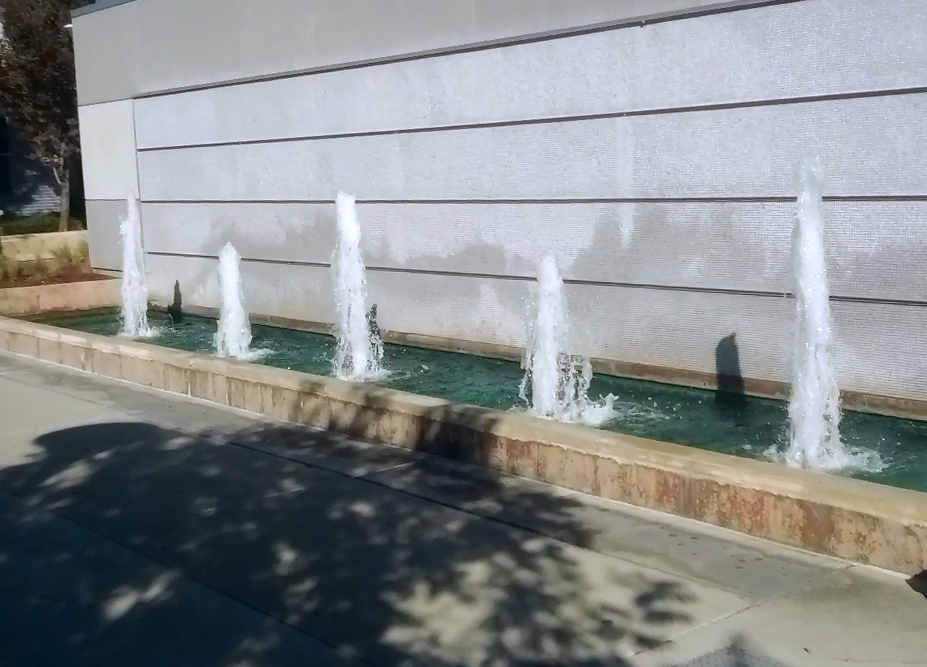 Water in the open basins that commonly surround fountain jets or nozzles is never tranquil while these systems are in operation. It will slosh around in response to the upward thrust of those jets or nozzles as well as the splashing the rising water makes as it drops back into the basin. If the circumstances are right, this disruptive splashing will produce waves in a distinct, consistent pattern. By exploiting these waves, it’s possible to produce an effect I find fascinating.

I first became aware of this phenomenon well before I was involved in watershaping as a profession. My wife and I were traveling in India, and there was a garden with a large fountain in an ashram where we were staying.

The reservoir was a 60-foot square filled to a depth of, I’m guessing, three or four feet. In the middle of the reservoir was a single fountain head, the orifice of which was set just below the water’s resting level. As I watched, the water would shoot about 40 feet in the air, then after about two seconds, would be shooting up no more than a couple feet. Then, seconds later, it would jump back up to 40 feet.

In a meditative mood, I wondered: How are they doing that? Before long, I was intrigued enough that I sought out the fellow who maintained the system. He was nice enough to show me the equipment room, where I saw an effect pump alongside a smaller pump that powered the circulation/filtration system. There was no valving or any other form of control system that could explain the way the fountain acted.

When I asked the gentleman how it worked, he let me know that hadn’t a clue: It just worked. I’m a person with a curious mind, so this was clearly not enough information to satisfy me. I went back to the fountain and sat there and watched.

I’m not a hydraulic engineer, but it wasn’t long before I developed a working theory for the system’s fluctuating performance.

I noticed that the water, agitated by the extent to which the jet disturbed the surface on its way through the water and up into the air, would slosh out to the side in a radiating pattern. At times, troughs in the wave action would eliminate the water column just above the head, leaving the jet free to climb into the air unimpeded. Then the situation would reverse itself, with the sloshing burying the nozzle under so much water that it interfered with the jet action and lowered the plume considerably.

In due time, I noticed that the wave/sloshing action was dependent on the concentric waves reflecting off the reservoir’s walls and flowing back toward the nozzle.

This was all happening in a basin in which the water was extremely agitated by the power of the jet. In fact, my estimate is that the level at the center of the reservoir would rise and fall by about a foot. When the jet was buried under a blanket of water, it fought its way up to a very low level. When the cycle reversed itself and there was no water over the nozzle, it would blast its way up to its full potential.

At the time, I didn’t have the vocabulary I needed to describe what I was seeing in the ashram’s fountain. Only later did I learn that I had been observing what is known as water-level dependency. My only regret is that I didn’t have a video camera with me back then: This isn’t an easy concept to describe in words, and a film clip would work wonders!

For the past 30 years, I have seen a large number of fountains where this effect works either well, not so well or not at all – observations that have led me to refine my sense of what it takes to produce the effect deliberately rather than accidentally. To this day, I have no idea whether the ashram’s fountain had been set up to act the way it did, but I prefer to think that whoever put it together knew exactly how to generate the fluctuations: That would have been incredibly cool!

Here’s how it all works: First, the fountain reservoir needs to be symmetrical in shape – whether round, oval or rectangular – with the nozzle or nozzles placed in the center. (If the shape is odd or eccentric, the wave pattern is too incoherent to create the effect. If it’s symmetrical, the waves coming from various directions have the same periodicity and will not cancel each other out.)

Third, there must be enough freeboard in the reservoir to make the wall surface tall enough for rebounding: If there isn’t enough of this surface, the water will lose energy by sloshing right out of the reservoir.

There’s also a fourth factor, although I can’t quantify it with any sort of certainty. At this point, I can only assume that there is some minimum required water depth in the reservoir. I haven’t tested this concept, but I believe that shallow water would create enough drag on the wave movement through the reservoir that regular periodicity wouldn’t develop the way it seems to in deeper water.

All of this information is fresh in my mind: Just recently, I installed a new fountain on the campus of Los Medanos Community College in Pittsburg, Calif. Walking around, I came across two existing fountains, and both were exhibiting the sort of sloshing that had caught my eye in India so many years before.

To me, the effect was satisfying in one of the fountains and made it more interesting; in the other, however, I thought the sloshing detracted from the fountain’s appearance instead of enhancing its beauty and appeal.

The first of the college’s fountains had a rectangular basin, about eight feet by 20 feet, with five bubbler heads set up about three feet apart on the long axis. The sloshing pattern was such so that the first, third and fifth heads would be in synch in a pattern opposite that I saw with the second and fourth heads, with one set being high when the other is low and vice versa. The range of difference in the jet heights was between two and four feet – quite a nice, modest effect. (Click here to see a brief video featuring this watershape.)

The other fountain was a rectangle, too, with three heads in a basin above five feet wide and ten feet long. In this case, however, the alignment of the heads must have been a bit off: The wave action was chaotic, and the jets operated at a jumble of heights with no pattern, symmetry or real visual appeal. (Click here to see a video of this fountain.)

As someone who has observed this effect on several occasions during the past 30 years, I have to believe that this is something that others have noticed – and that these fountain effects aren’t accidental. For one thing, this would explain the fact that fountain suppliers sell wave dampeners to minimize water-level fluctuations over fountain heads. For another, I have to believe that this enough of a known quantity that good fountain designers have been exploiting the sloshing, thereby producing effects with abiding visual appeal.

When it works, this effect truly is special: It brings a consistent pattern and variety to a simple fountain system without a great investment; it also lends these spaces an air of mystery, making curious observers like me wonder how in the world the effect is achieved. Try it: You’ll like the result.