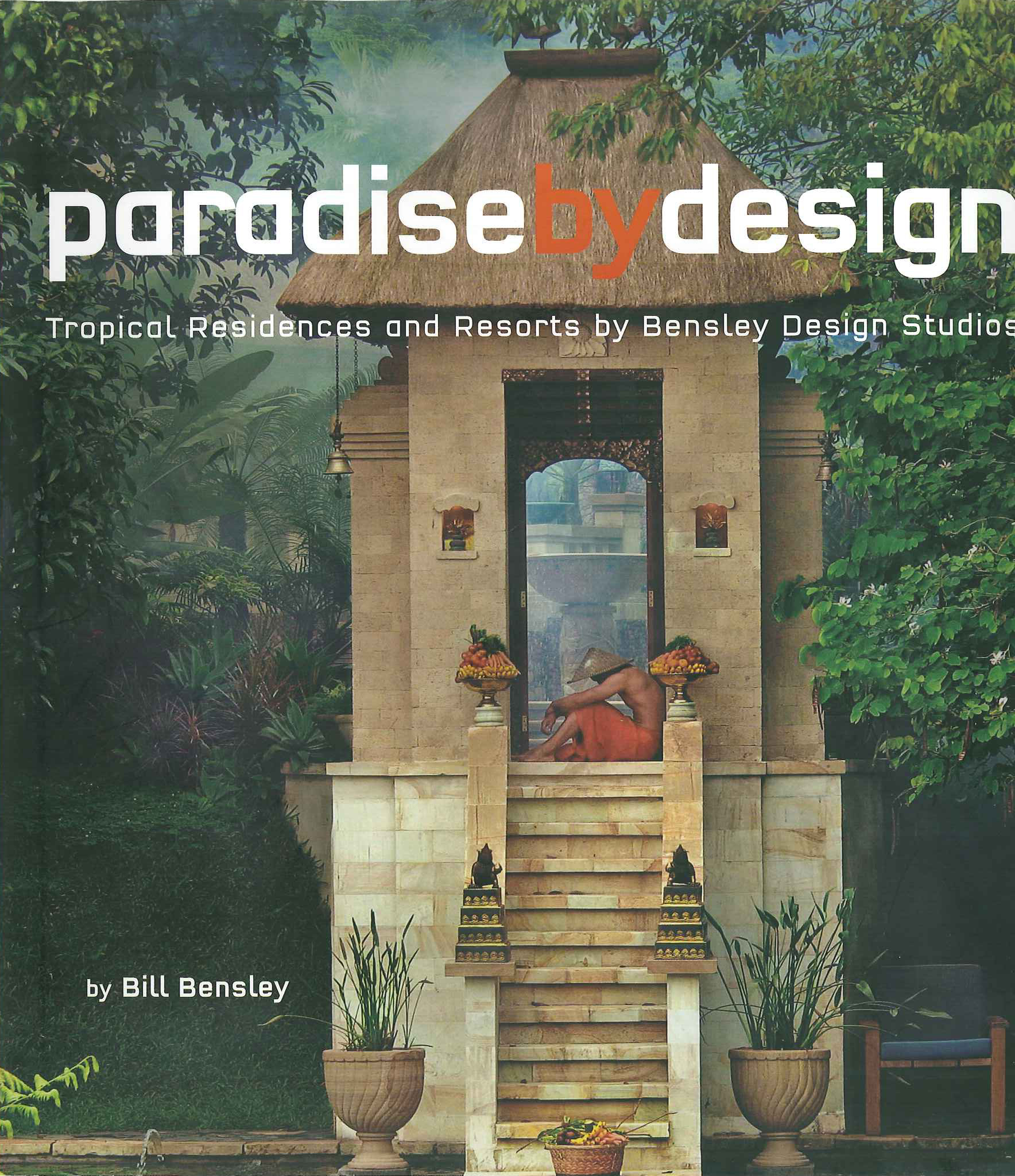 One of the most common things I hear from my clients is that they’ve been inspired by experiences they’ve had at vacation resorts and want to recapture those good times in their own backyards.

I’ve heard this often enough that I keep an eye out for volumes on resort design as I wander through bookstores and hunt for material online. It’s a narrow subject, of course, so I don’t run across too many relevant titles. That’s why I was immediately pleased to find Paradise by Design by Bill Bensley (Periplus Edition, 2008).

My pleasure quickly turned to delight: The book is certainly about designing resorts – but it goes so far beyond expectations that I believe Bensley’s work will have an invaluable influence on the rest of my career.

He’s an American architect/landscape architect who, since graduating from the Harvard School of Design in 1984, has spent his entire career working in southern Asia through a practice based in Thailand. In 2007, Architectural Digest honored him as one of the world’s 100 top designers, citing a body of work that includes designs for more than 100 resorts in 20 countries from India and China to Malaysia, Indonesia and Thailand.

To begin with, I was stunned that someone who graduated just a year before I did had amassed such a large and beautiful body of work. True, he has a staff of 45 designers, engineers, sculptors and artists who work with him, but to perform so consistently and persistently at so high a level is truly remarkable – and the results are nothing short of spellbinding.

Bensley has become famous for wildly eclectic, daring designs that take cues from the local culture and environment. He’s particularly acclaimed for lush, intricate planting plans that are obviously influenced by his observation of tropical flora. And although he defies labeling, his “style” is clearly influenced by Asian traditions.

In reviewing his work, I’m now inspired to learn more – much more – about Asian design history. As he point out in the text, those cultures are rich with artisanal traditions of all types, and the resulting objects play significant roles in the lives of huge numbers of people living in these societies, few of which are very well known in the West.

With all that as a backdrop, Bensley’s work is both vast and incredibly focused. In fact, the majority of the images and text in this book are dedicated to an endless array of details he folds into his projects: As is true of Frank Lloyd Wright and a handful of other great designers, Bensley and his associates design every aspect of a property, from the structures and the landscapes to the sculptures, textiles, furnishings, railings, floors and waterfeatures.

What impresses me most (and I’m obviously becoming a big fan) is that he applies this level of control over resort-scale spaces. Some of these are huge: Hundreds of acres, hundreds of rooms all rendered down to the finest details, all beautifully integrated and internally consistent in ways that create rich environments overflowing with romance, ambiance, elegance and even spirituality.

Working at that scale is clearly a team effort, and another of the things I admire is that Bensley consistently credits his associates and various collaborators and is generous in discussing those who have influenced him.

As I marveled at this epic body of work, it occurred to me that a great many of my clients these days are Americans of Asian descent or recent immigrants – and that Bensley had expanded my sense of the importance of the rich design traditions of their cultures. I can only think this book has started me on a path that will enable me to do a better job of meeting their needs and desires.

On top of that, I can’t wait to see what Bensley achieves in the future. If you’re unfamiliar with the great artist and have a taste for integrated design at its best, you’re in for a treat that comes from deep in the shade of paradise.