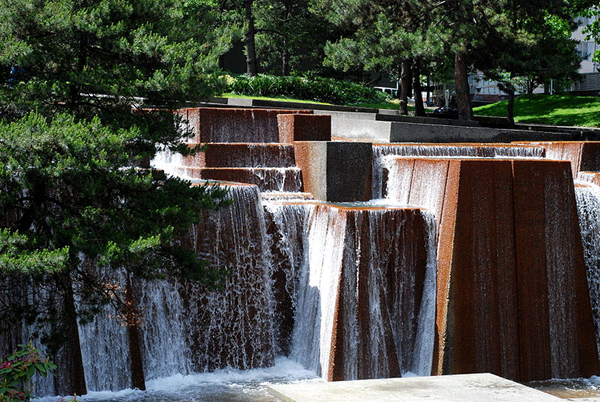 Back in a time before I had anything to do with watershaping, I lived for a few years in Eugene, Ore. – a smallish college town that always left me craving more-urban spaces.

Portland was up the road by a couple hours, and in the days before our first child appeared, my wife and I would make fairly frequent trips to visit the closest real city we had available. We loved Powell’s City of Books, had a few favorite restaurants and spent a lot of time in various parks and rose gardens and museums.

I had traveled around Europe and had seen lots of fountains along the way, but the Ira Keller Fountain in Portland was the first one I can ever recall as making the impression on me that it was the product of someone’s pure, artistic vision.

Designed by the firm of Lawrence Halprin & Associates and dedicated in 1970, the structure pays homage to the way water moves through Columbia Gorge, a key landform to the east of the city. Judy and I had visited the gorge not long before, and the fountain struck me as impressive in the way only something inspired by nature can be.

The fountain doesn’t hold a lot of water (with about 75,000 gallons in the entire system), but it moves it at an impressive rate, sending 13,000 of those gallons over the falls each minute. It’s so active that the evaporation rate is both a concern and a significant ongoing expense, but occasional efforts to close down the Keller Fountain (and other “water wasters” around the city) have yet to get anywhere.

I’ve long seen this as something of a precursor to the Fort Worth Water Garden, which I discussed in this space not long ago. It also puts me in mind of Halprin’s watershapes for the FDR Memorial in Washington, another subject of one of these Travelogues. The Keller Fountain is all about the power of water to shape and cool a space, and it has long been one of my favorites.

For a video of the Keller Fountain in action, click here.

For a video on Halprin and all of his Portland fountains, click here.