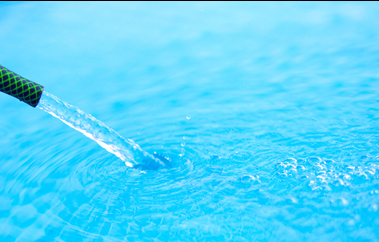 For more than 50 years, lots of swimming pool builders, plasterers and service technicians have operated under the assumption that the plaster dust they commonly see during the first two weeks after plaster application is normal, unavoidable and acceptable. None of that is correct: In fact, recent research shows that plaster dust is not desirable and that it can and should be prevented.

Problems arise because of the composition of the plaster dust: Made up of calcium hydroxide dissolved out of the new plaster surface, it eventually reacts with the alkalinity of the pool water to form calcium carbonate – that is, scale.

So if you observe any plaster dust at all, it means there has already been a loss of material from what was originally a smooth, hard, densely troweled plaster surface. Instead, you’re left with a weakened surface that is more susceptible to scaling and other issues related to aggressive conditions – and none of this would have happened had the various trades involved in the project followed a few simple procedures.

A few years ago, onBalance – a consulting firm that performs research on pool water chemistry and assesses its effects on plaster surfaces – determined that three factors promote increasing levels of plaster dust, including less-than-adequate plaster application technique, filling a pool too soon after finishing and using aggressive fill water. Any one of these negative factors can produce plaster dust; the more an individual factor is emphasized (or if multiple negative factors are present), the more dust will form.

Typically, the result is plaster that is rougher than it should be (even though the change may not be visible to the naked eye or detectable by touch), more porous, and more susceptible to deterioration and staining as time passes.

That time factor is the key: The harm is done right away, during the startup of the pool system, but the damage only manifests itself to the eye or to the touch after a considerable period – weeks or months, depending on the care and accuracy with which the pool’s water is maintained. But the point is that damage has been done and is not reversible.

These observations on problems associated with plaster dust are not new: The concrete/cement industry has long viewed “dusting” of a concrete surface as a sign of a weak, porous surface and furthermore sees it as an indication of less-than-adequate workmanship at the time of application.

Reports published by the American Concrete Institute and the Portland Cement Association agree that a range of factors – high water/cement ratios, adding calcium chloride to the mix, adding water to the surface while troweling; and finishing the surface at times when temperatures are high and humidity is low – can lead to weak surfaces.

These reports focus on dusting and efflorescence related to cement flatwork, but we’ve found that the processes and outcomes ACI and PCA observe with flatwork translate directly to the cementitious finishes we place under water in swimming pools.

Following their lead, we at onBalance conducted a series of experiments and studies that confirmed the ACI/PCA observations and led us to define six key don’ts:

In addition, our research as well as numerous field tests have shown that strong plaster, allowed sufficient time to harden before filling and then filled with non-aggressive water, will actually prevent plaster dust formation – meaning you’ll find an unchallenged plaster surface that is denser, smoother and more durable. 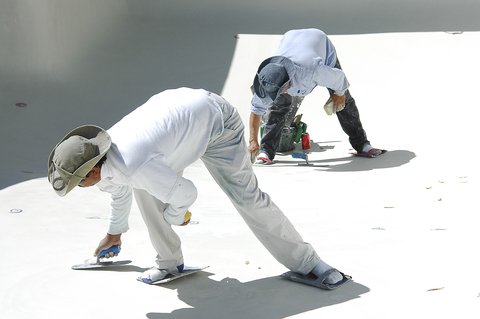 [ ] Plastering Practices: To achieve a strong plaster surface, use a low water/cement ratio; limit calcium chloride additions to one percent or less of the weight of the cement; decrease or avoid calcium chloride use as ambient temperatures rise; do not trowel water back into the plaster surface; avoid overly late hard troweling; and plaster in moderate temperatures (or tent the pool).

[ ] Fill Delay: To allow the plaster to harden without interference, do not fill the pool for at least six hours after plaster application. This is a conservative limit: In certain environmental conditions (including ambient temperatures below 50 degrees) it may take the plaster longer to harden.

[ ] Fill-Water Chemistry: To avoid an early, undesirable challenge to the plaster surface’s integrity, make certain water with a proper saturation level is used in filling the watershape. We recommend a +0.5 reading on the Langelier Saturation Index with a pH under 8.2. We further recommend using the “Bicarbonate Startup” method, which produces water with the desired chemical composition. (See the link at the end of the article for more information.)

It is important to note that known-to-be-aggressive water must be treated before it is introduced into the pool. As the pool fills with untreated, aggressive water, reactions will occur that will pull material out of the plaster as the water seeks balance, thereby doing damage to the plaster surface. By the time the pool is full, the water may actually be balanced, but it will have become so by dissolving calcium hydroxide off the surface.

The damage in these cases is all done within the first 24 hours. By the time a service technician shows up, he or she may need to add very little sodium bicarbonate or calcium to the water because it has already found what it needs to move toward balance by eating away at the plaster.

As we see it, working with positively saturated tap water and a bicarbonate startup approach results in generation of almost no plaster dust (if any at all) and causes no increase in the water’s calcium content. Balancing the water therefore will be a much simpler task, the filter won’t get clogged by scale and even dark-colored plasters will stay dark.

To those who prefer producing a better-than-“normal” product, who pride themselves on doing their best by way of application and startup practices, who know their clients will be pleased if their pool finish is smooth, durable and basically trouble-free for years instead of months, our recommendation is simple: Proper plastering, adequate fill delay, and proper fill water chemistry make all the difference in achieving finishes that endure, smooth to the touch and easy on the eye.