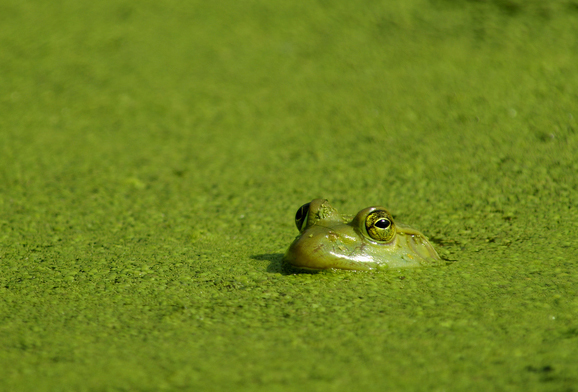 Although a little algae in a pond is generally a good and inevitable thing, observes Mike Gannon, a bloom of any noticeable extent is never truly welcome.  That's why he has sized up and is ready  to recommend a number of ways to help keep the intrusive greenery at bay.

It grows almost everywhere on the planet and serves as a source of both food and shelter.  It can reproduce at stunningly fast rates and rapidly turn its environment red, blue, brown or green.  It can float freely or attach itself to a surface, overwhelming every square inch of it one way or another.  It can glow in the dark.

It, of course, is algae, and it can stand taller than a building or be microscopic.  It can appear as a primitive animal type or as a plant.  It has been around for 400 million years and spans a broad swath on the evolutionary tree.  It lives in our oceans and in our freshwater systems.  It is in our drinking water and our swimming pools.   It can live in peaceful symbiosis with its surroundings or quickly and indiscriminately kill its host.

In this article, we’ll settle down from the extremes listed above and focus on forms of algae commonly encountered in ponds and watergardens – first defining it by common types and then looking at what it takes to keep it under control.

Trouble is, there are hundreds of types of algae that can make their ways into a pond’s water.  And to be fair, some of them are actually beneficial even though not one of them is ever exactly a welcomed sight.

So when the question rises, as it inevitably does – “How do we get rid of this pond algae?” – the quickest answer may not be the correct one.  In fact, any professional asked this question by a client will usually respond by probing around with several more questions, determining first what sort of algae is present. 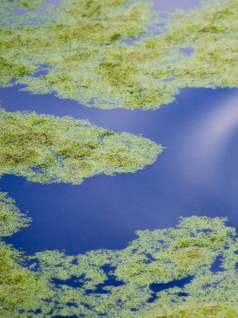 The good news is, the hundreds of different types of pond algae can be broken down into three basic categories:  green-water-causing algae, string/hair/blanket algae and floating algae.   Knowing which type you have at hand – or which combination of those types – can help formulate a realistic plan to control algae issues no matter whether it pertains to a Koi pond, a natural pond, a farm pond or a backyard watergarden.

It’s also important to recognize for sanity’s sake that working with algae is about keeping it under control rather than eliminating it once and for all.  Not only is eradication basically impossible, it’s also not necessarily a good idea because a little algae is a good thing – natural, normal and inevitable. 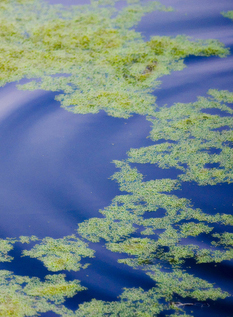 To get started, let’s look at the algae trinity in some detail.

[  ]  Algae in the form of green water is probably the most common bloom faced by owners and maintainers of ponds and watergardens – and the one form of infestation that can actually come close to elimination.  For all that, however, we need to start with the premise that green-tinged water is not necessarily bad for fish or the overall health of the pond; rather, it’s an aesthetic challenge and not the look a pond’s owner was pursuing when the pond was installed.

The shades of algae-afflicted water can vary from a deep green/black to a bright lime green color and shows the presence in the pond of algae cells suspended in the water.  This presence is typically a symptom of inadequate circulation and filtration and of the fact that the nutrient level (that is, algae food) is being created faster than the filtration system can accommodate it.  This excess of nutrients is gobbled up by the algae, which become fat and happy and turn green.  As their population swells, the water turns green as well, now filled with tiny, floating plants that produce chlorophyll with reckless abandon.

Temporary greening may also occur after heavy rains rich in nutrients (nitrates) or after water changes (when the fill water happens to contain phosphates).  This temporary greening can be ignored, as it will usually vanish in a short time; by contrast, chronic green water – lasting, say, for three weeks or more – needs to be addressed. 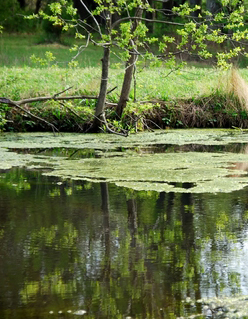 [  ]  Potentially more serious than green-water algae blooms are those that involve what are known as string, hair or blanket algae, which can be much more persistent than other algae infestations.  It appears as long strands growing on the surface of the liner, the equipment, the rockwork and/or plants and can become either a dense matting or remain as sparse growth.

However it acts, its defining characteristic is that it is attached to a surface.  As such, this is the kind of algae that most often emerges in stream and waterfall areas of ponds and watergardens.  Although it can be a perennial pest, it is normally a visitor in early winter as well as late winter and early spring. 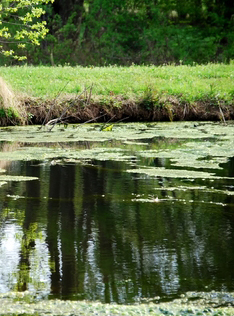 That timing coincides with the life cycles of other pond organisms:  As plants head into seasonal dormancy, they slow down their nutrient consumption and leave the supply to opportunistic algaes.  Similarly at the end of winter, the algae pick up where they left off before the plants begin to rise to the new season:  The green meanies will take every advantage of a steady nutrient supply.

In small blooms, string algae is no great threat to a pond system or its plant and animal populations and will generally clear away in a few weeks – that is, once plants and bacteria have fully resumed their roles in the pond’s ecosystem.  But long-lasting blooms are highly undesirable and can cause serious, pond-life-threatening problems:  If the infestation persists, the offending strings need to be removed manually, usually assisted by water treatments.

[  ]  Floating algae is the least common algae that occurs in Koi ponds and watergardens – especially in any system in which a skimmer is part of the filtration system.  This is a puffy type of algae with a brown/green color and floats freely on the water, typically in low-circulation zones or shallow areas and in ponds in need of a serious cleaning.

As with string algae, floating algae can occur at the same time as green-water episodes.  But it can also crop up when the water is very clear and otherwise healthy looking.  It’s also more common in natural ponds and farm ponds than in well-circulated Koi ponds and watergardens and is therefore the least concerning of the three types.

No matter the form it takes, the most refreshing thing about pond algae is that it is a manageable problem with reasonably simple solutions.  Some are general and will work on all three classes of pond algae, but there are others that are highly targeted to deal with specific issues and situations.

The common solutions are aimed at control, not elimination – and for a simple reason:  Any strategy aimed at eliminating algae is likely to eliminate other things, including plant and animal life as well as key features of the pond environment including beneficial bacteria.  The stronger the approach, the deadlier the results:  This is why we tend to focus on improving circulation, cleaning up the pond and restoring the system to its natural balance instead of on potentially deadly interventions.

We’ll start, for example, by increasing aeration with an air pump and diffusers or by revving up circulation efficiency by adding a small pump with a decorative spitter/fountain.  We’ll also add plants, beef up beneficial bacteria treatments and add liquid barley extract (more on this approach below).  A pond cleanup is also a helpful step:  Not only will it work wonders with water condition, but it will also spruce up the pond and kick its visual appeal up several notches. 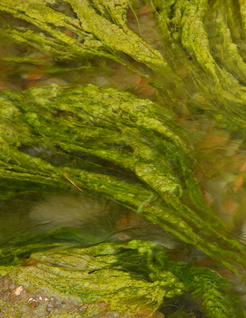 Sometimes, however, a bad algae situation calls for tougher measures.  Persistent green-water algae, for example, is frequently caused by nitrogen- or phosphate-related issues and will take more than a shot or two of bacteria to address.  In these cases, it may be necessary to upgrade the filter system or insert an ultraviolet-light sanitizer to break down the algae.  (The advantage of the UV approach is that it is relatively inexpensive compared to a filter upgrade.) 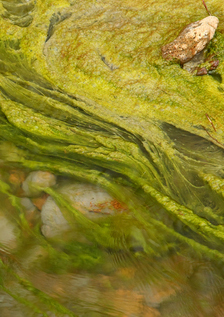 The best thing about adding UV treatment to a system challenged by green water is that it has no detrimental effects on the rest of the system:  fish and wildlife are unharmed, plants thrive and the water clears beautifully – all without the addition of harsh chemicals.

But UV treatment isn’t a cure-all.  It won’t make up for a system that is poorly filtered or has an underpowered circulation system, for instance.  And it does nothing with attached or floating algae, because these forms don’t pass through the circulation system to be exposed to the UV light.  Adding beneficial bacteria and plants can help by increasing competition for nutrients, but as was explained above, there are seasonal limits to this approach when faced by opportunistic adversaries such as string or floating algae.

In the case of string algae, the nutrient source is more typically phosphates rather than nitrogen.  The best approach here involves manual removal of the infestation followed by addition of beneficial bacteria and of barley straw – a classic European approach made more convenient through the availability of liquid barley extract.  It’s not perfectly clear how it works, but barley’s components somehow retard algae growth while doing no harm to plants, fish or wildlife.

Getting more aggressive, weak hydrogen peroxide solutions can be applied to good effect, but this is a nasty material and should be used with great (and carefully measured) restraint.  There are also ionizing systems that, when placed in line within a circulation system, will zap algae by introducing copper ions to the water.  This approach has it advocates, but there are some who don’t like the idea of beefing up the water’s copper content and having to deal with its potential toxicity.

For floating algae, the typical approach involves increasing aeration and circulation, removing excess debris and sludge and going strong with additions of beneficial bacteria.  Barley-based treatments work here, too, and there are numerous chemical treatments to try if the infestation is persistent or particularly nasty.  Typically, however, vigorous aeration gets the job done.

It sometimes happens that a pond will be afflicted by two or even all three algae forms at once.  The best suggestion here involves short-term approaches such as those outlined above followed up by a strategy of prevention:  Place a strong aerator on the bottom of the pond during the warmer months, relying on the fact that robust circulation and elimination of dead spots is generally the best approach to algae control.

And remember:  Algae is everywhere.  Truly everywhere.  It is crucial to our environments, so it makes sense that it will persist and no sense at all to try to eliminate it, because it will always come back.

In my own business, I believe in moderation in our approaches when algae blooms, no matter its type.  I also know, through observation and working with a variety of approaches that run from mild to aggressive, that control is possible and that I can guide my clients to a place where frustration, confusion, time and expense can be moderated and sharply reduced by being watchful and not letting situations get nasty.

We all like greenery, but not in our pond water.  With a bit of care and insight, we can keep things crystal clear.

Mike Gannon is owner and lead designer at Full Service Aquatics, a pond installation and service specialist based in Summit, N.J.  A certified Aquascape contractor, he may be reached at This email address is being protected from spambots. You need JavaScript enabled to view it..