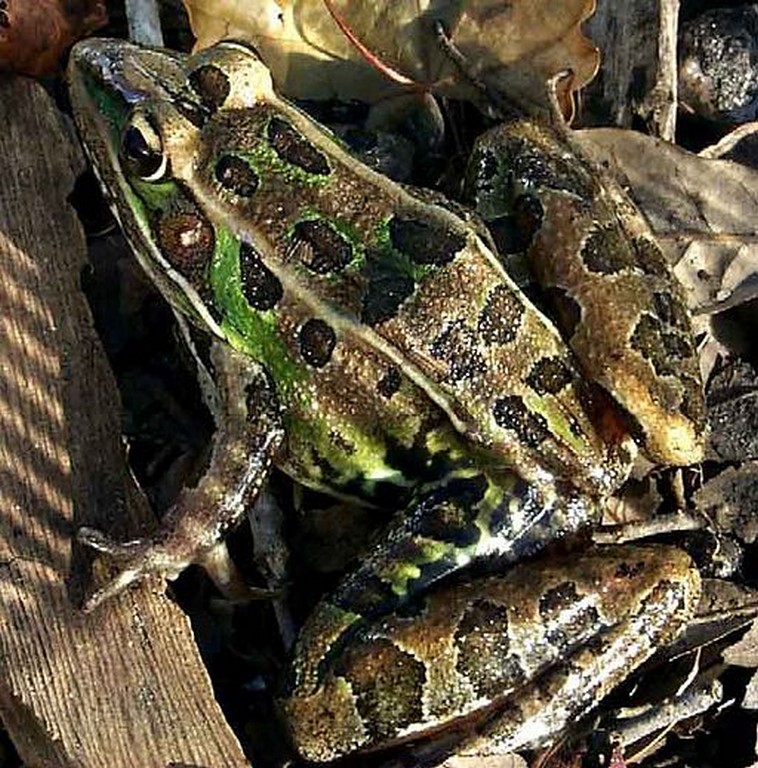 If frogs show up in a pond, writes Mike Gannon, it's a sure sign that the water is healthy.  But it also means some extra chores for the pondkeeper -- including a need to massage a few details to persuade these finicky  amphibian guests to stick around for a while.

For lots of people, their knowledge of frogs is limited to stories they’ve heard about them, from the biblical plagues of ancient Egypt to Mark Twin’s tale of a celebrated jumping frog in not-so-ancient California.

For those who own ponds, however, frogs are a more familiar proposition – a stout thread in the fabric of ecosystems in which these amphibians play colorful and interesting roles.  They are so much more than the plump critters who populate fairy tales and flirt with enchanted princesses.

Indeed, these formidable denizens of backyard ponds play keys roles in pond diversity and sustainability, which is why I advise so many of my clients to set things up in ways that will welcome frogs as members of a complete and more interesting ecosystem.

One of the cool things about frogs is that, if a yard has a pond, they’ll somehow manage to find it and will arrive both unannounced and uninvited.  It’s like “Field of Dreams”:  Build a pond and they will come!

They make these appearances because ponds offer two things they crave:  water and food.  And the reassuring thing about their intrusions is that they’ll only stick around if the pond is right with the world and is thriving as a healthy, sustaining ecosystem.

In return for water and a ready food supply, frogs add dimension and personality to a pond – great sound, interesting appearance and incredible variety – and they do it all without being very demanding in return.  Some new pond owners push things along by introducing tadpoles or even grown frogs, but it’s generally not necessary:  Frogs will, someday and somehow, find their way to the water. 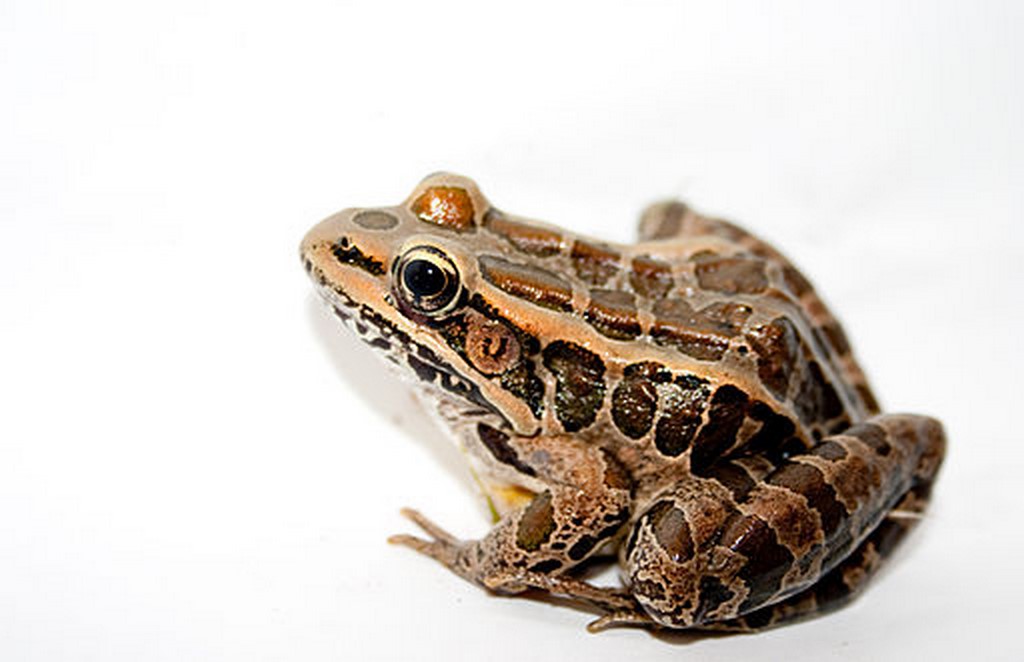 How do they manage this trick?  It’s because they spend a lot of their time on the move, looking for places that meet their basic needs for water, food, shade and security.  Once they find a suitable pond, they add to its diversity while coexisting productively with fish, plants, insects and other wildlife.

Moreover, frogs come in many shapes, sizes, and colors and prosper within a broad spectrum of water-centered settings.  And they all start their lives in the water, which explains their inclination to take advantage of it wherever they find it.  But frog habitats range well beyond the water’s edge:  They live on the land and burrow beneath it, climb in trees and nestle in grasses and make their ways in wildernesses or cities.  They’ll even waltz their way into homes from time to time – but they’ll always stay near water.

One disturbing fact about frogs is that their populations are declining globally.  They’re acutely sensitive to habitat loss and the use of pesticides, and these threats may explain why they are so attracted to well-kept backyard ponds:  They can use all the help they can get and seem to thrive in these isolated environments.  Still, it’s sad to consider that creatures who’ve occupied ecological niches on our planet for 190 million years are imperiled – and that’s one very good reason our pond-owning clients should be encouraged to tolerate and welcome their arrival, hoped for or not.

In addition to being ancient, frogs are just plain cool.  They are among the planet’s few fully amphibious creatures, as much at home in and under water as they are on dry land.  At one moment, they are champion swimmers; the next, they are bounding across a lawn or negotiating land, rocks, plants and trees with ease.  And they truly can leap great distances with disarming ease.

Many species of frogs also have the ability to change color on demand – a natural-born skill they use in being more efficient hunters.  They are, in fact, voracious carnivores, using their long, muscular tongues to capture prey.  They also use eyes that give them a nearly 360-degree range of vision; have sensitive ears as well as skin that resonates sound to their impressive brains; and boast a superlative sense of smell that gives them an edge when they hunt, as they often do, at night. 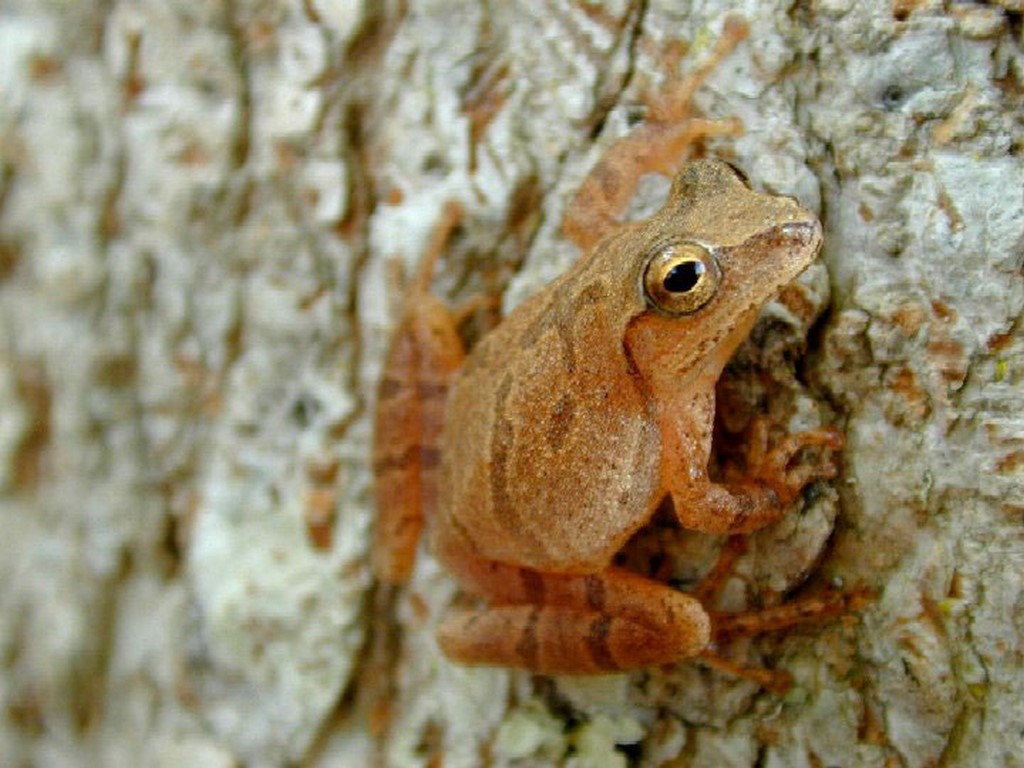 They have no teeth, so they swallow their prey whole.  Their favorites include insects, worms, snails, dragonflies, mosquitoes and grasshoppers.  Larger frogs will go after small animals such as mice, snakes, birds, small fish, small turtles and even small frogs – pretty much anything that comes into range.

But they’re not inconsiderate:  Fish caught by frogs, for example, will generally be sick or weakened, meaning healthy backyard pond fish including Koi and goldfish don’t have anything to be stressed about.  In fact, the interactions of frogs and fish can be highly entertaining:  I’ve heard stories about a frog hitching a ride on the back of a large (and willing) Koi.

There’s no promise that a backyard pond will turn into Sea World, of course, but it’s been my observation that pond owners who are patient and cautious can get their frogs to eat out of their hands.  They particularly enjoy plump nightcrawlers, but in their enthusiasm, it’s sometimes a stray human finger that gets a frog’s attention at feeding time.

Nature is a series of balances, of course, and frogs are subject to predation as well.  Sometimes, in fact, bigger frogs will eat them.  And despite the fact that many frog species have skin that carries toxins that make them taste terrible, they are favorite snacks among herons, raccoons, snakes, turtles, foxes, big fish and possums.  Humans get in on the act, too, as any visit to a good French restaurant will attest.

For their parts, dogs and cats just want to play with the frogs they encounter, but they’re so enthusiastically physical that the confrontations tend to decrease the frog population.  As a celebrity frog once said, it’s not easy being green!

While a frog’s life may not be a breeze, I let my clients know that it’s not difficult to make their ponds frog-friendly.

Before we get there, however, there are a couple things I ask them to consider:  First, frogs are mostly solitary creatures, congregating only during the breeding season.  During those times, males become territorial – and are vocal about it!  If a pond covers a large enough area, there will be room for several frogs, and their calls can become quite loud and persistent.

Second and along with that territoriality comes an inclination among frogs to hang around, reproduce in the pond annually and build a population that will roll forward year after year.  For all that, I tell clients they shouldn’t expect a population explosion of ancient Egyptian proportions, basically because fish and even other frogs like to eat the egg sacs in which tadpoles develop.

Third, I alert them that, in breeding season, it’s not uncommon to find eggs on various surfaces inside a skimmer box, but that they won’t be there or anywhere else for too long, because the tadpoles will emerge after about 10 days.  At that crucial point, I suggest that it’s a favor to the mommy and daddy frogs to police the skimmer and usher the tadpoles into less turbulent water. 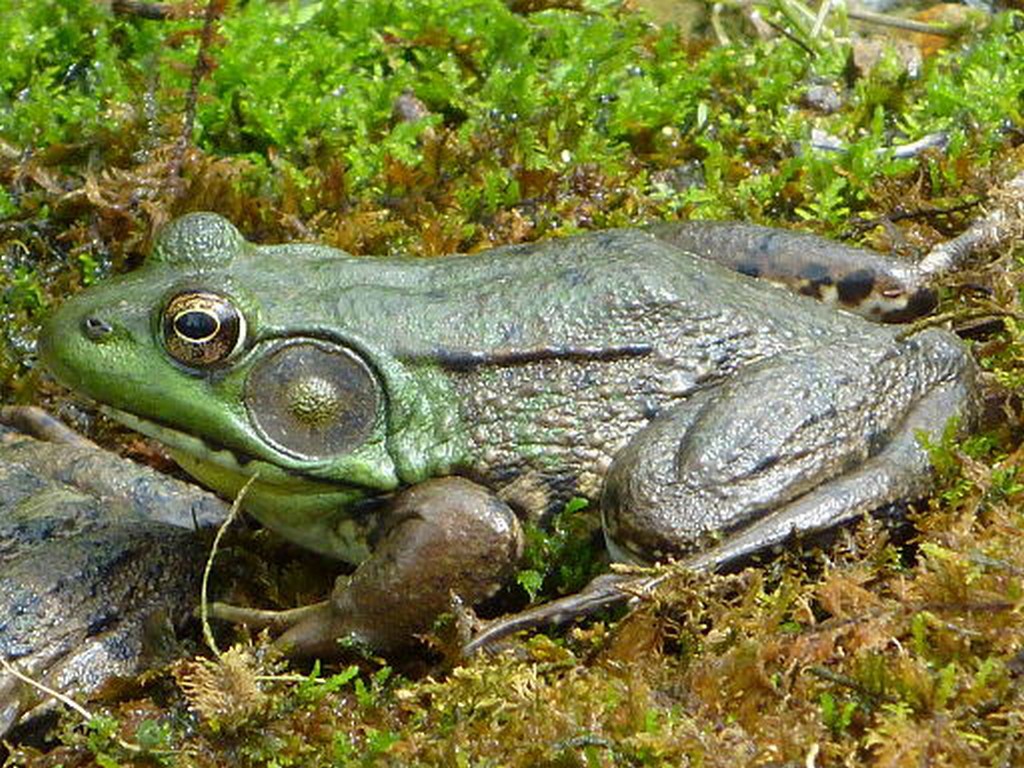 With those basic biology lessons understood, it’s easy to focus attention on making a pond attractive to amphibians.

For starters, I tell my clients that there should be good quantities of well-maintained plants both in and around the pond, especially long grasses.  In addition, frogs like calm water, which is why we’ll set up areas with slow water flows (but not so slow as to create a dead spot in the circulation pattern!).  And, much like their fish companions, frogs like hiding places, so we’ll lay a simple clay pot on its side for the purpose.

If a client likes the amphibian idea, it’s easy for us to take the pond design in a frog-specific direction with no fish included – and it’s something that can be done with only a modest investment.  In these cases, we discuss the advantages of including a “dirty” component in the form of a six-inch-deep tray of compacted soil covered with gravel mulch.  This will give the frogs a place to dig in through the winter months.

In the natural course of things, the common species that will show up to occupy a pond in where I live include pickerel frogs, leopard frogs, green frogs, bull frogs and peepers.  But that’s only a start, and appearances by other types should come as no surprise.  As suggested above, I let my frog-inclined clients know that it’s better to wait for the frogs to materialize rather than stock the pond:  There’s greater value to the overall local ecology, I tell them, in waiting for native species to show up and move in.

Once frogs have settled in, the fun begins for pond ownrs.

During the Spring months, the cheerful peeping of frogs is one of the early indicators that warmer weather is coming and that a pond is waking up from its long winter’s nap.  I advise our clients that this is a good time to do a bit of pruning and grooming around the pond – that is, before the frogs move out of the water and become a hazard to safe navigation near the water’s edge. 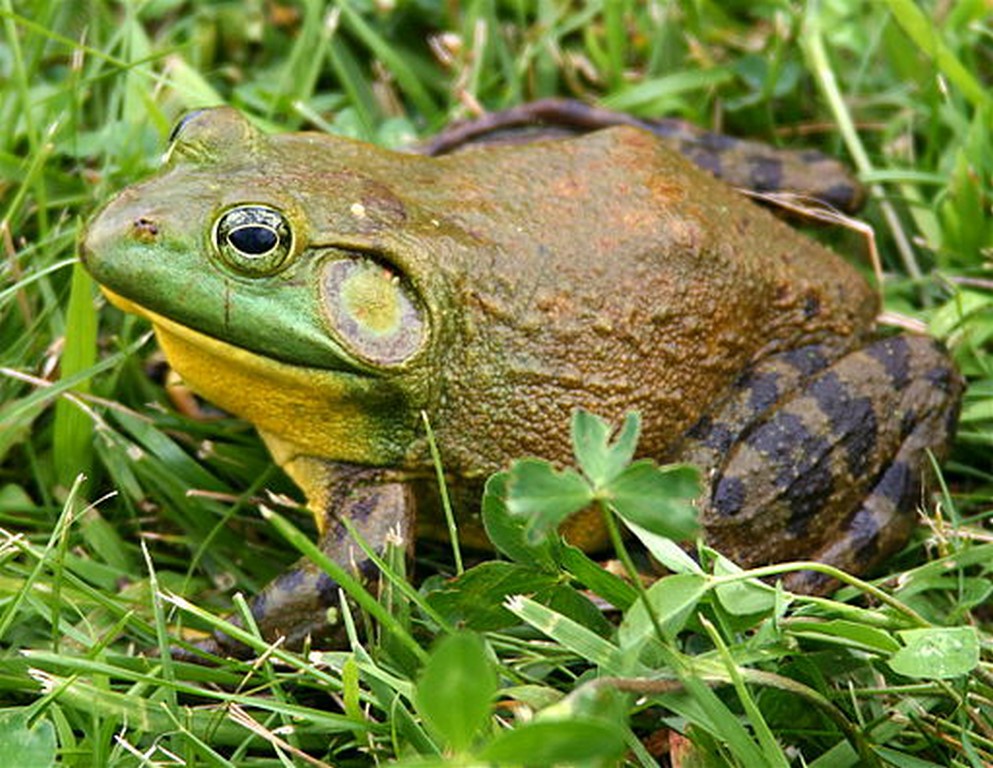 The Summer months are prime frog-watching season, and the antics never stop.  But the situation requires some monitoring:  If there’s evidence of predation, for example, pondkeepers will need to install net coverings to keep birds and other mildly aggressive predators at bay.  And they should check the netting regularly to make certain no frogs have become entangled in it or found their ways on top of it instead of staying safely beneath it.

During winter months, it’s good for pondkeepers to be aware that frogs will often climb into skimmers to enjoy the slightly warmer pocket of air inside the box.  That in mind, skimmer lids should be removed slowly in cold weather to avoid startling the frogs inside:  In their panic, they can get sucked into pipes and suffer other unpleasant fates.  Beyond that, cold isn’t much of an issue:  Some frogs can actually go into a state of near-freezing during the winter months and thaw as rising temperatures allow – a rare and wonderful survival skill.

I firmly believe that frogs of all sorts are great in backyard ponds and let my clients know what to watch for and what to do when the amphibians march into view.  These creatures are great fun to watch, and children in particular are utterly smitten with them.

Who can resist the charm of watching a creature, just sitting there on a lily pad, suddenly launch its tongue at a snack like a guided missile?  It’s a quintessential pond experience, and always has been.  It’s also great to think about the importance of offering our froggy friends safe haven in an increasingly harsh world.  Why not be ecological heroes in a world that’s not quite as hospitable to small creatures as it should be?

Mike Gannon is owner and lead designer at Full Service Aquatics, a pond installation and service specialist based in Summit, N.J.  A certified Aquascape contractor, he may be reached at This email address is being protected from spambots. You need JavaScript enabled to view it..