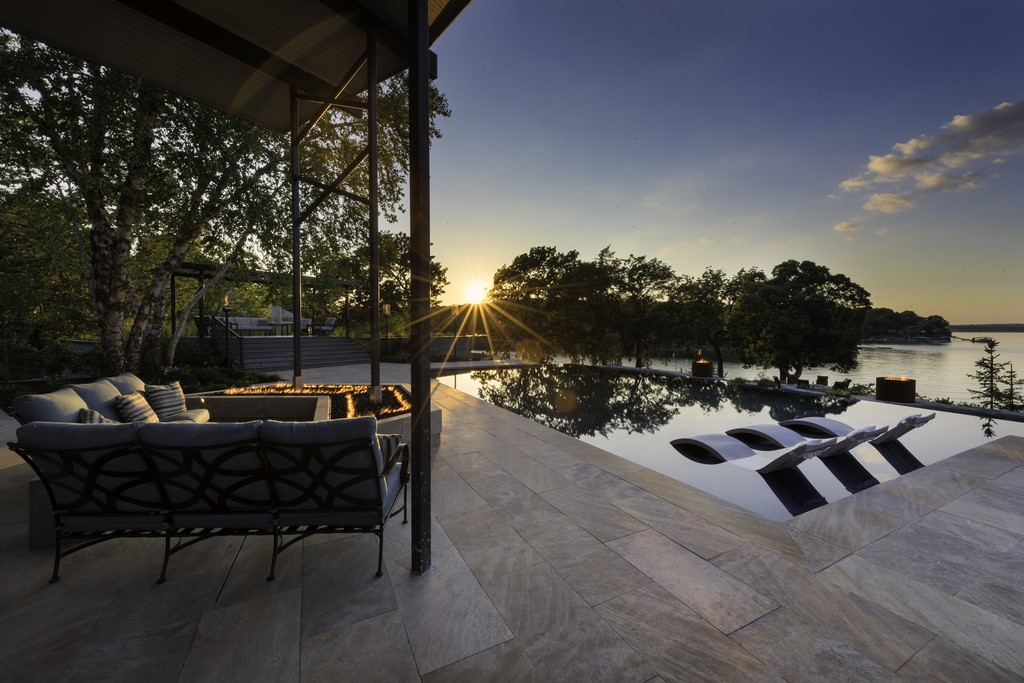 It’s strange how things can work out with a project.

In this instance, we were called in to design the outdoor environment to go with a couple’s weekend/vacation home on the water of Grand Lake o’ the Cherokees in northeastern Oklahoma. It was a beautiful, inspiring setting, with the home situated at the end of a peninsula that reached out into the lake, and it quickly became a favorite gathering spot for a couple generations of a fun-loving family.

We developed the design based on a few parameters offered by the clients as well as the nature of the incredible site and the distinctive Prairie-style architecture of the home. Beyond that, there was one requirement: The project had to be finished in a rush. It was October 2016, and all work had to be done by April 2017 so a nephew’s wedding could take place there.

This would mean a lot of winter work in an area removed from our base in Overland Park, Kans., so we handed the construction documents off to a reliable builder. With our support, everything went off like clockwork and the April ceremonies came off without a hitch. By that time, however, both clients had been diagnosed with cancer, and both passed away soon after the project was completed.

The area where the home is located is called Monkey Island, a fanciful name on a couple levels since the island is actually a peninsula and there have never been any non-human primates in the vicinity. The site is basically a chunk of rock that slants at a reasonable angle from side to side down the length of the peninsula.

Not long after they purchased the property, we at Lorax Design Group popped up on their radar. Their main residence was near Kansas City, Mo., and they’d heard about us and our positive reputation through the grapevine. A friend of theirs, an interior designer also based in Kansas City, contacted us and asked if we’d be interested in driving over to visit the property. It’s always been my belief that ours was the only firm they considered.

During the first meeting, I talked with the clients’ representative and a local home builder who was working on some renovations and upgrades having to do with the house. I knew about the deadline when I later walked the site to get the lay of the land and develop a sense of the views the site afforded. Over that weekend, I prepared an initial design and contacted the homeowners to arrange a meeting during the next week. 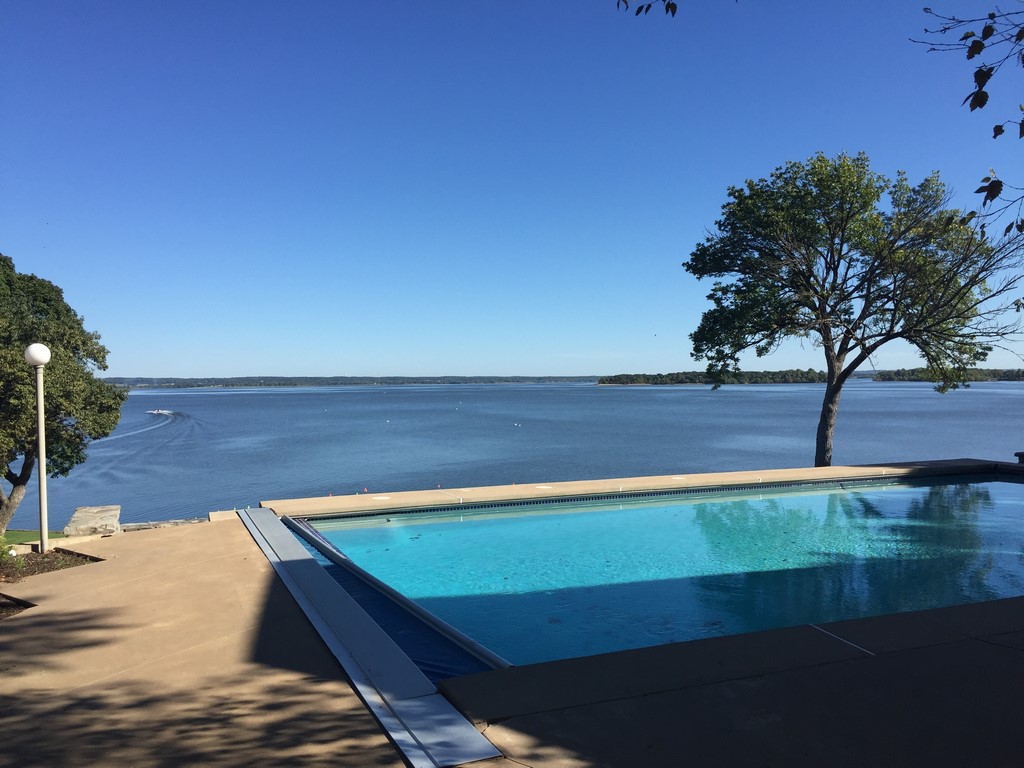 As they had requested, the design included a vanishing-edge pool, a spa, an outdoor kitchen and big expanses of deck for entertaining. They loved what they saw and hired us to prepare a complete set of construction documents.

The plans covered every square foot of space beyond the house itself, and we knew that completing it all would be a tall order given the super-short time frame. It was so tight, in fact, that my company’s construction unit decided it had to decline the project, at which point the clients asked me to help assemble a team that could pull it all together.

We started things in the right direction by generating the construction documents in double-quick time. I brought in a pool contractor from Atlanta, and he pulled in subcontractors from all over the map: a framing/steel crew from Wichita, Kans., a steel fabricator from Kansas City; a plumber and a tile setter, both from Phoenix, Ariz.; a shotcrete crew from Dallas; plasterers from Tulsa, Okla.; and a lighting contractor from Omaha, Neb. The home builder was involved as well, ready to tackle the outbuildings and the decking in accordance with the plans.

I stayed in touch with the project throughout its six-month duration, making site visits as requested and required. For the most part, this was winter work, so a lot of the activity on site took place under heated tents.

As for the construction process itself, it was challenged from start to finish by access issues. To make it work at all, we actually had to build a temporary road from a golf-cart path up to the boat marina, but even with that dedicated passageway, things were never easy.

Then there was the fact that the peninsula was basically a chuck of rock. In this one sense, the time restriction was actually helpful, because it meant that we pretty much had to work with the site’s contours as we found them. Although we did some terracing to define distinctive levels, we generally left well enough alone and followed the existing topography.

Work started with the removal of part of an existing pool, with the demolition crew breaking down its far wall and tearing out the in-pool spa. The plan was to create visual interest by cutting away enough rock to lift the far side of the pool above a new, lower terrace level, thereby creating a water-on-water vanishing-edge effect that would be visible from inside the house. This was just about all of the cutting that was needed: The rest of the decks and the fire feature were left to follow the site’s contours.

With that demolition complete, forms for the pool were built, with the new outside edge of the pool redesigned as a chevron to reflect the roofline of the house. We picked up the same form with the fire feature, the intention in both cases being to make it seem as though these structures had been built at the same time as the house. Once the shotcrete work was complete, it was basically a race to the finish – and there was a lot to do! 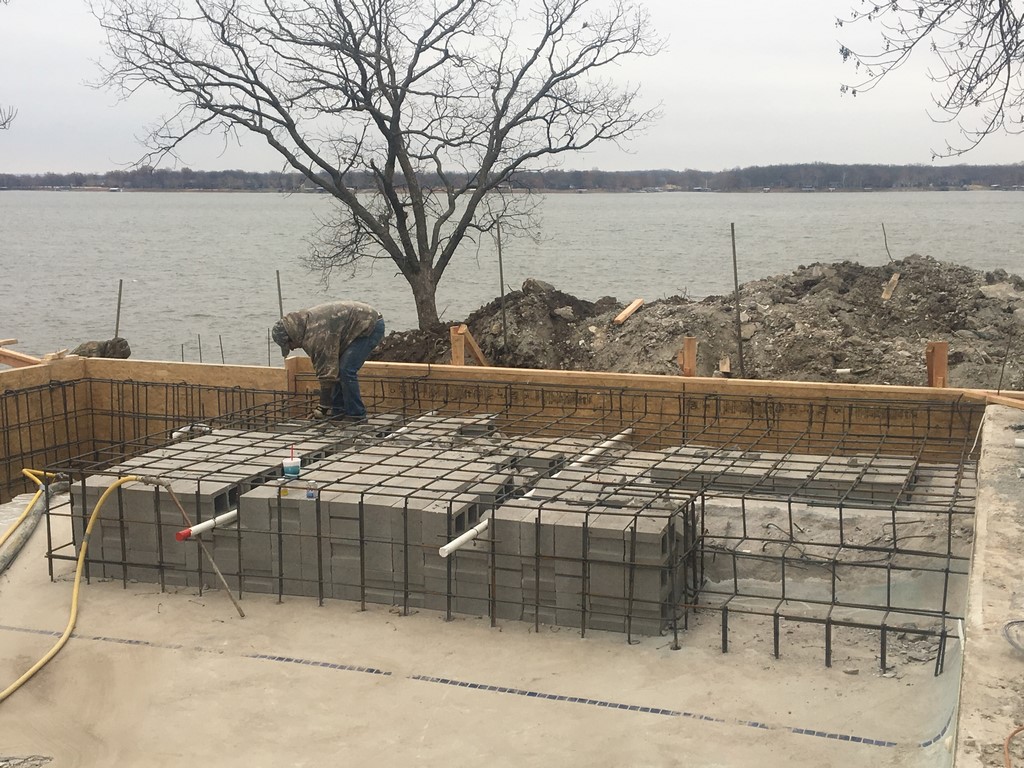 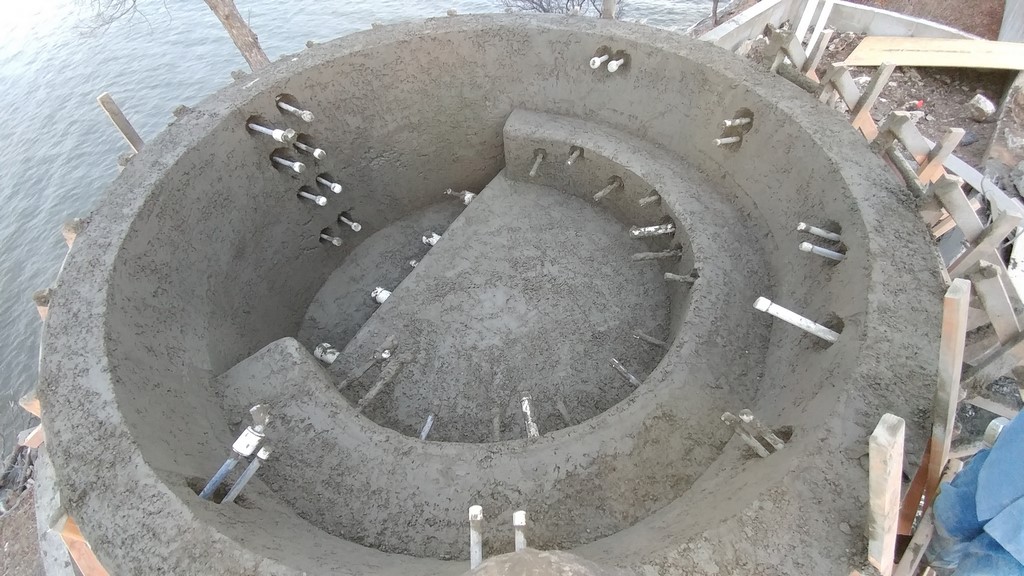 As mentioned above, the site includes an outdoor kitchen, various decks and seating areas, but there’s also a walk-up bar, a green roof, planting areas, mature trees and a substantial complex of retaining walls. The key to keeping everything moving forward was adhering at all times to the immense amount of detail we had included in the plans: We may have rushed to get them done, but we spared no effort in making them complete.

The home builder proved a valuable player through all phases: Not only did he tackle everything beyond the pool and spa, but he managed the whole site, figuring out how to schedule and stage various parts of the process and keep the juggling act going despite the access issues and limited on-site storage capacity.

Throughout the installation process, the pool was the core of the design. Some of it had to do with the way it mirrored the roofline’s bold angles, some with how it sets the key horizontal planes for the whole poolscape, and some with the elevated edge and how it sets the tempo for the elevations and transitions surrounding it, both high and low. The pool also features generous expanses of a custom gradient blend from Oceanside Glasstile (Carlsbad, Calif.); we used it for the raised spa as well.

The perched, perimeter-overflow spa is quite large with a ten-person capacity, and it takes full advantage of views across the lake. In addition to seating areas equipped with calf and quad hydrotherapy jets, there’s a deep well on its outside edge meant to allow several bathers to hang over the side and gaze out across the lake.

The decks were a key part of the design scheme, serving to balance the upper and lower areas like a rug draped across the space and there to ease passage from one outdoor room to the next. Once you leave the formal, geometric forms up on the pool level, the lower deck goes free-form to follow the natural contours and undulations of the peninsula.

There were just two sacrifices to the timeline: The Cherokee stone decking was all intended to have the uniform tan appearance seen on the upper deck. But the last load delivered by the supplier, based an appreciable distance away in eastern Oklahoma, was a mix of light and dark material, and there was no choice other than to work with the material at hand to meet the deadline.

The other had to do with the landscaping: We were responsible for the entire outside design, but the landscaper/gardener who worked on the property wasn’t rigid when it came to following the plans. It wasn’t a big deal – and again, it was more important to finish on time than it was to get every one of the details just right. 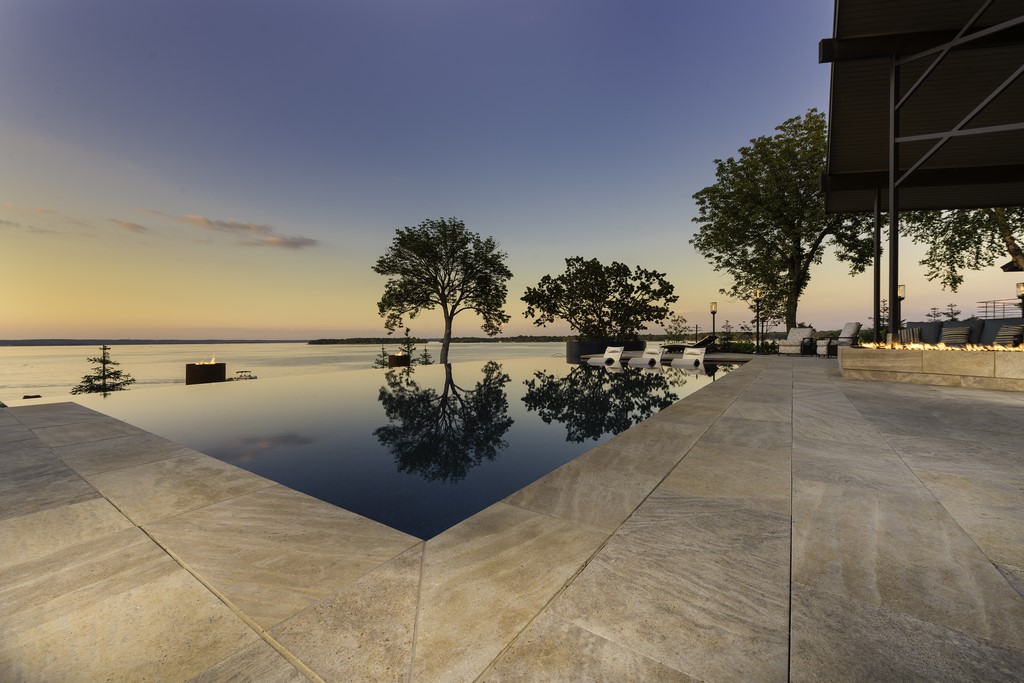 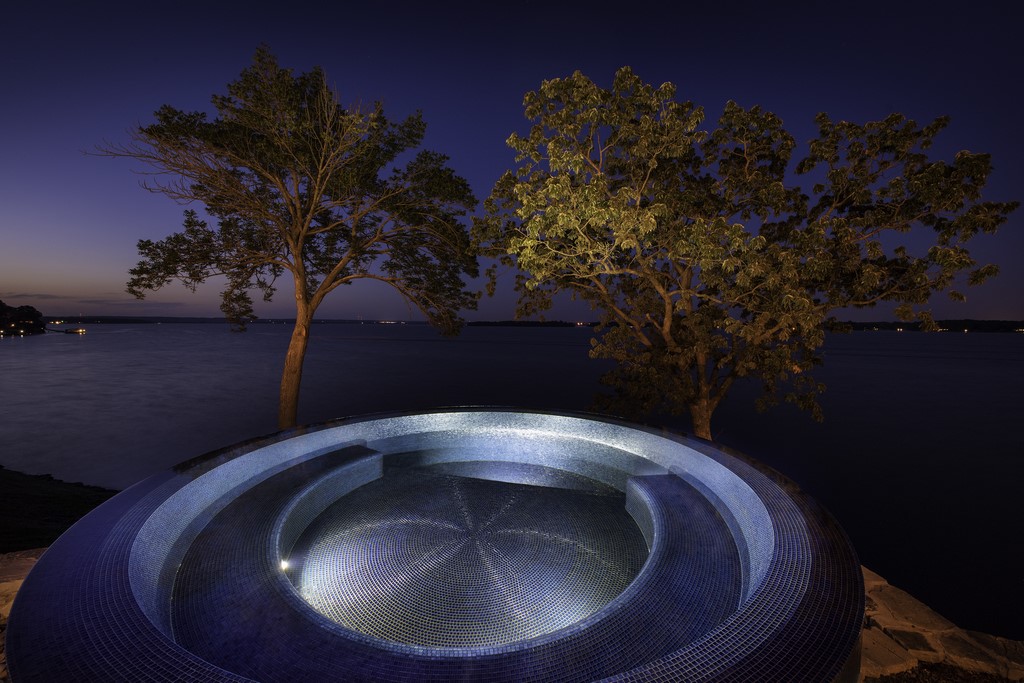 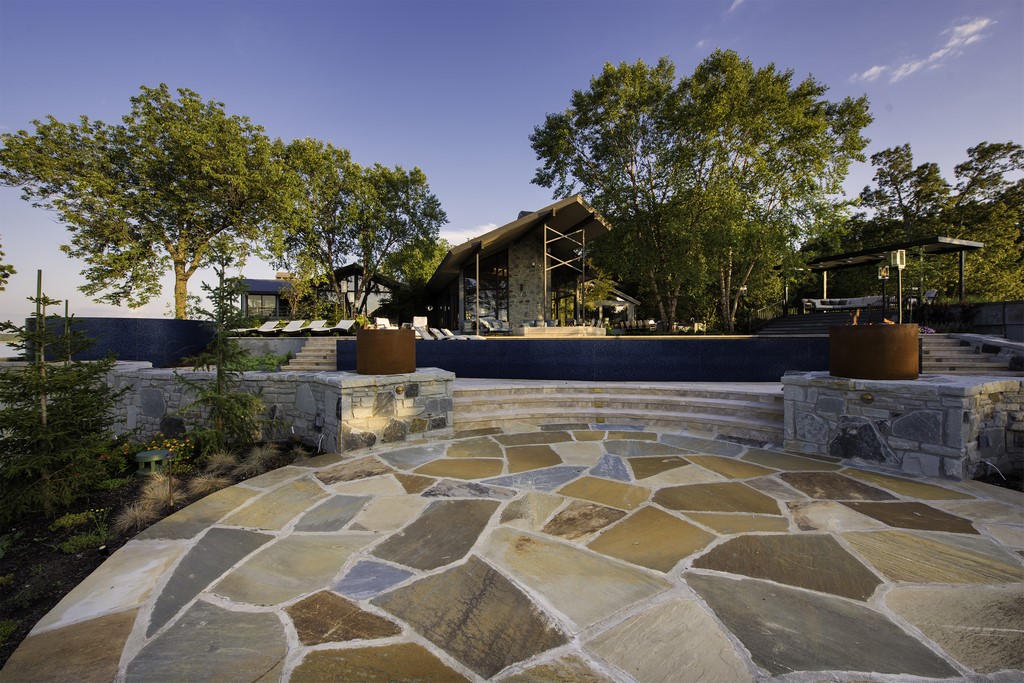 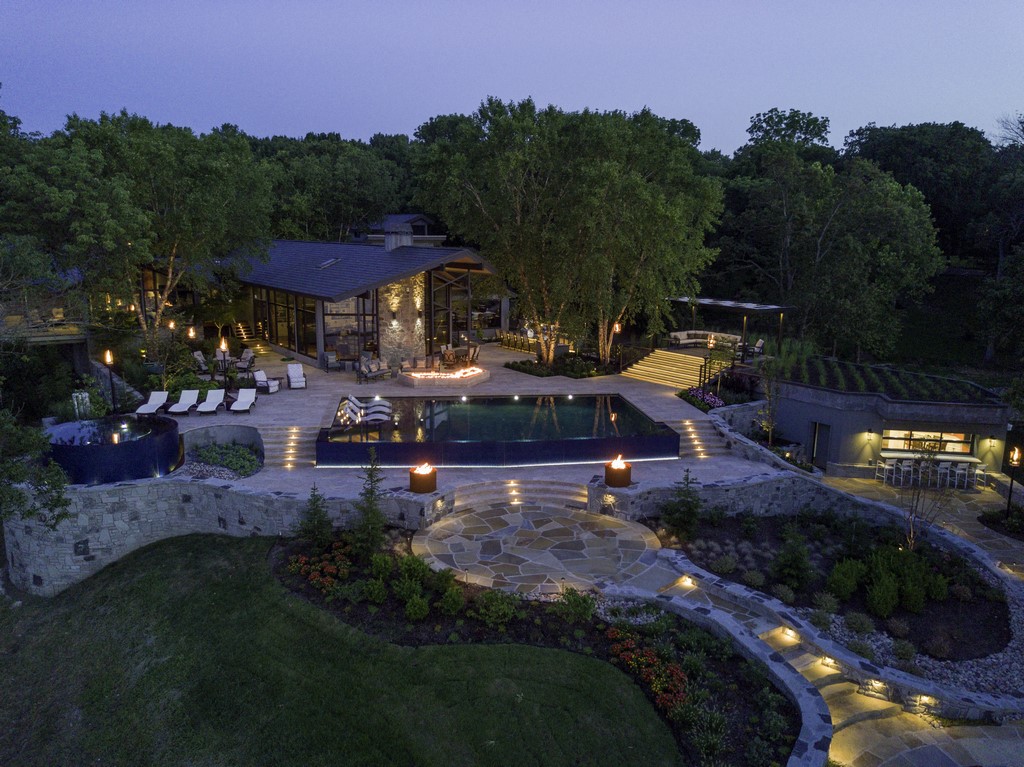 The news about the clients made the concluding steps of the project sad and difficult – and tougher to take than usual because so much work had gone into making them happy. The weather had been utterly brutal, too, which didn’t raise the general spirits. For all that, the project team never wavered in its focus and stuck to the plan, aware of the fact that what happened each day would have a major effect on hitting the deadline.

The short calendar taught us other lessons as well. While it’s often a challenge for a client to find the right designer to assist in creating a unique outdoor-living environment, it can be even harder for a designer to assemble a team of craftspeople and have them travel from different regions across the country to pool their skills and knowledge to make it all happen. It helped in this case that we had good connections; nonetheless, it was tough to arrange and manage given the compact timeline.

We were all proud that our work was completed before the wedding ceremony – and happy that our clients were able to enjoy the poolscape with their extended family before passing away. We’re told they loved the result; may they rest in peace!

Kurt Kraisinger is a landscape architect with more than 25 years’ experience in design and consulting. In 2009, he founded Lorax Design Group with a goal of creating memorable spaces that allow people to engage in their surroundings. He received his degree in landscape architecture and urban planning from Kansas State University and participates in Genesis 3’s programs. He may be reached at [email protected]