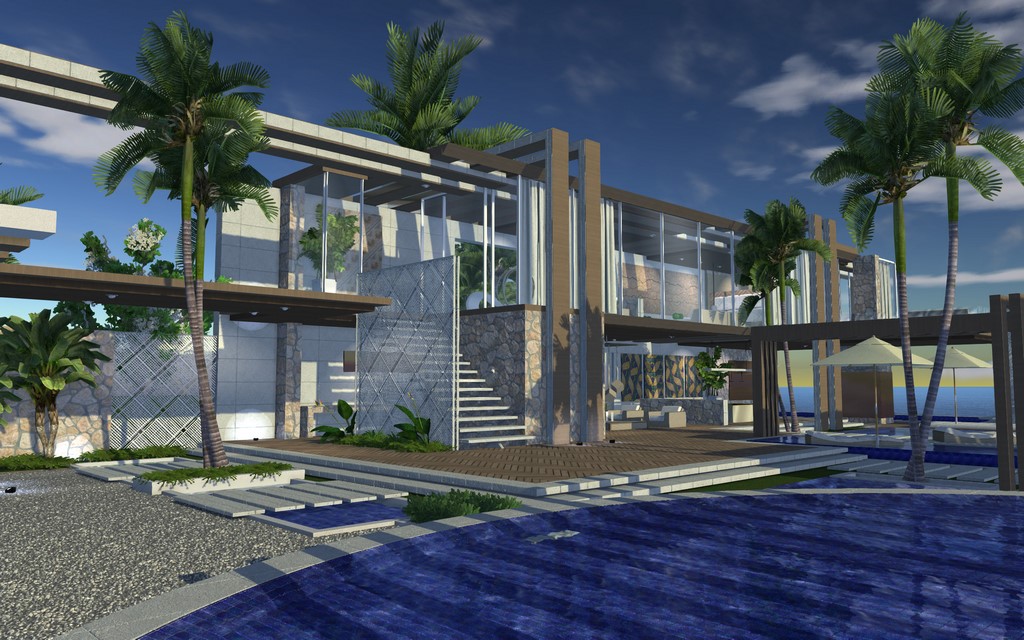 I grew up in my father’s pool business – a successful design/build firm based in Henderson, Nev. Even in high school, I was consciously preparing myself to get involved on the design side of things and had signed up for a drafting class to start developing the requisite drawing skills.

But something big was happening in the late 1990s: I was all set for my drafting class and had equipped myself with the tools I’d need by way of straightedges, French curves, pencils and erasers when the announcement was made that, as an option, we could set those tools aside and work instead with a new-fangled software package known as AutoCAD, a computer-assisted drafting system.

There were a lot of kids in the class, but only two of us took a chance on computers. I don’t know what motivated the other guy, but I’d been fooling around with computers and video games for years and felt so comfortable with monitors and keyboards and mice that it was a natural choice for me.

It proved to be a good decision. Now, with more than a decade as a computer-aided designer of pools, spas and other waterfeatures under my belt, I can’t imagine doing things any other way.

My father was definitely an old-school, ink-and-paper guy, and that’s the way the family business flowed. He had such a command of the tools of the drafting trade that it didn’t make any sense to him to pursue a different path. I, on the other hand, might be called an “early adopter,” at ease in working with computers and convinced of their potential.

By the time I completed high school in 2000, I was already quite proficient with AutoCAD – yet I didn’t immediately put those skills to use. Instead, I headed out on my own, worked my way through multiple jobs in the next few years and didn’t formally join the family business until 2004. From the day I started there, I was spending part of my time trying to teach my father how to work with digital systems – but there didn’t seem to be any way around the fact that it was basically an ink-and-paper operation. 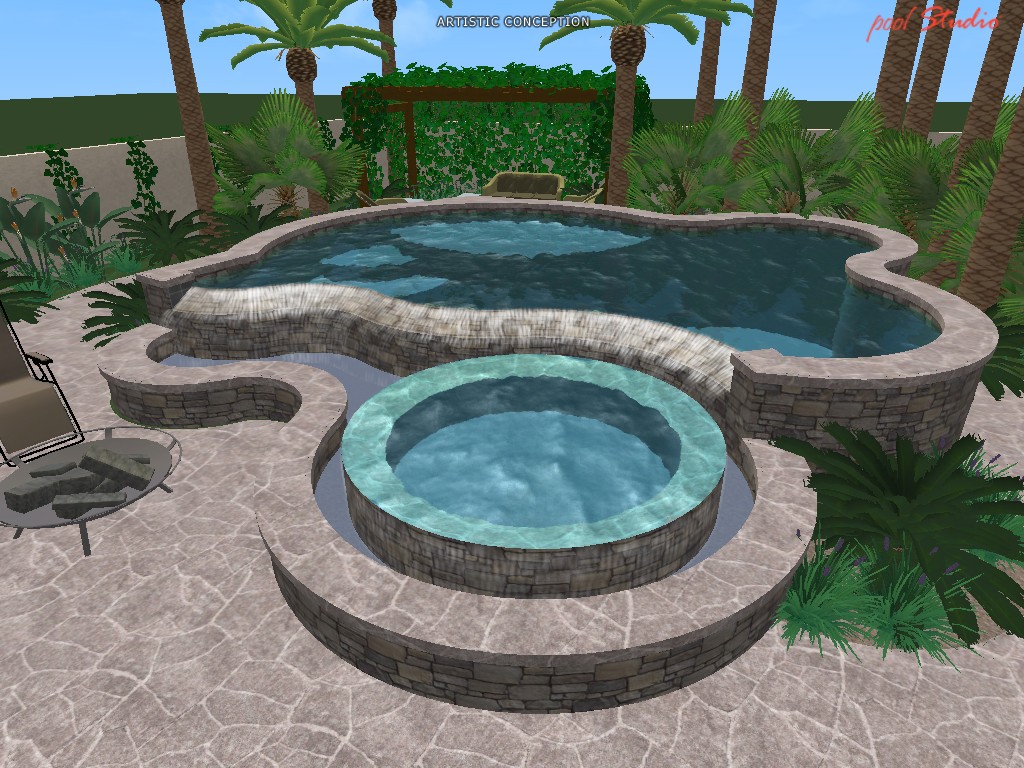 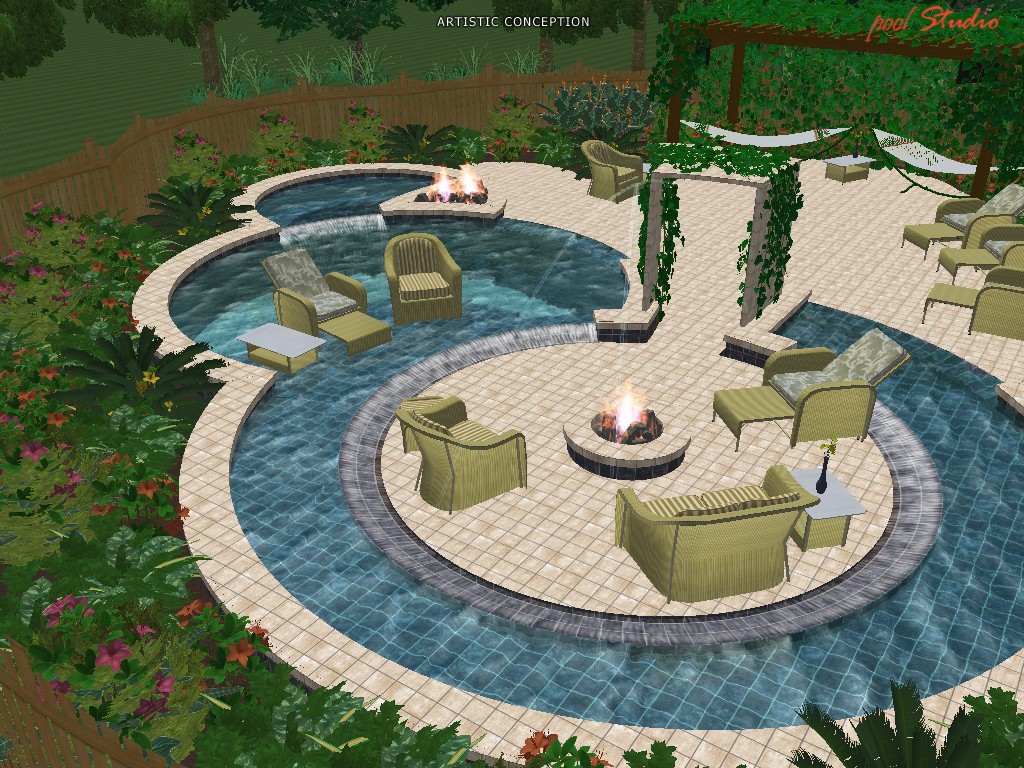 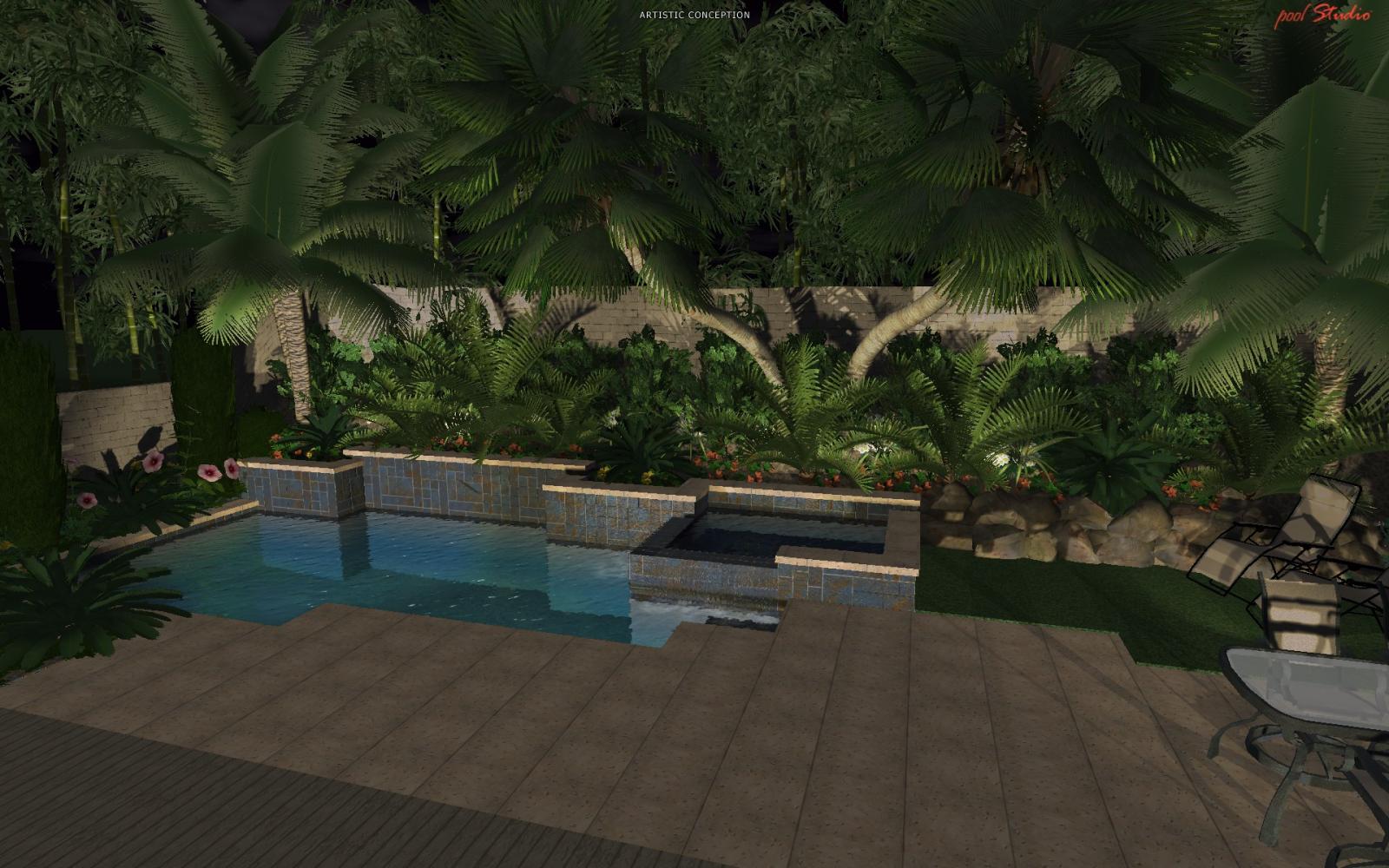 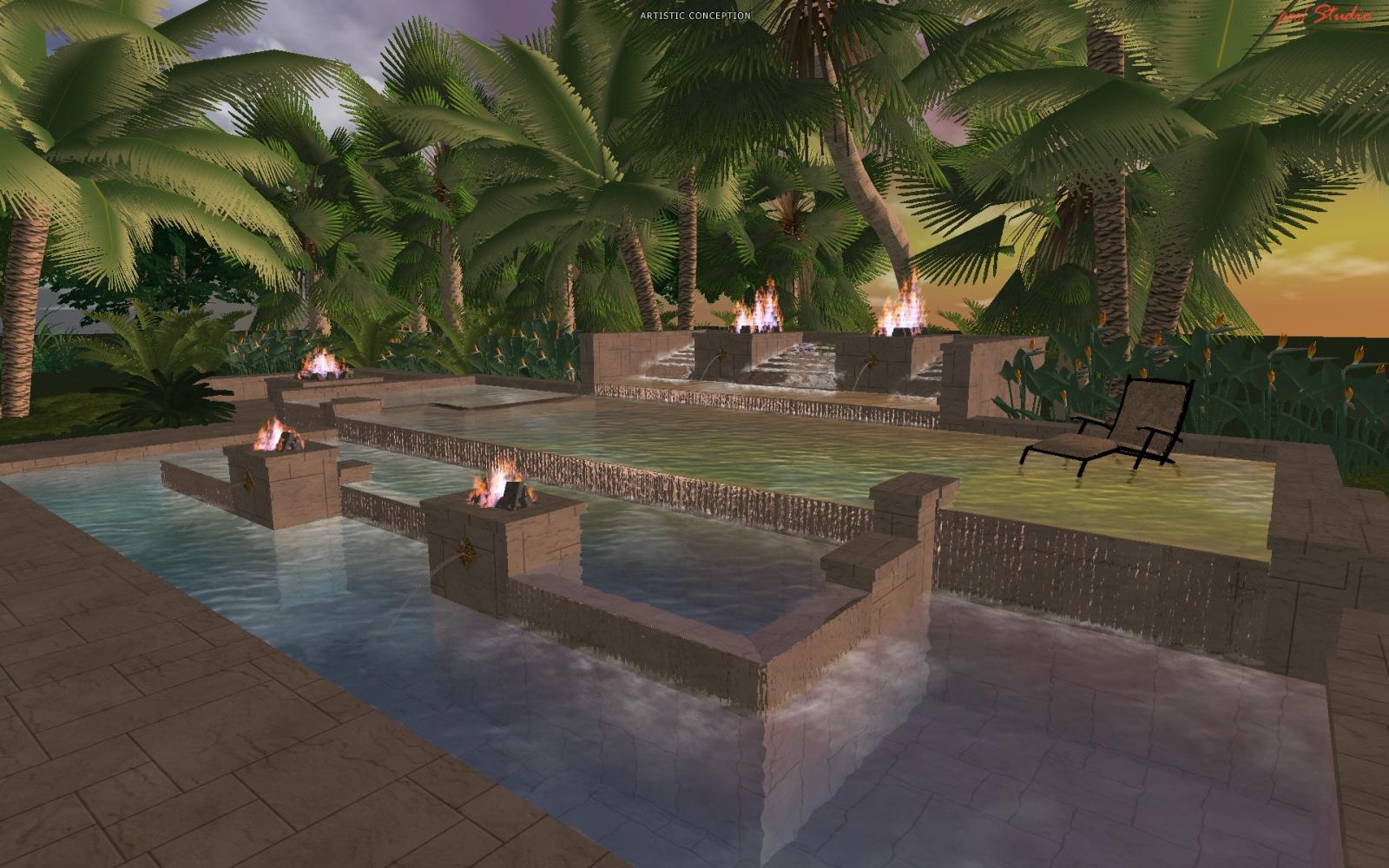 When a project came up, my dad would send someone to the site (often me) to measure the structures and setbacks and map the basic space. That paperwork would come with me back to the office, where I’d work up a CAD drawing of all the particulars of the site. He’d take that file, print it out on a large sheet of paper and start work, his style, drawing up the watershape and its surroundings in two dimensions while seated at the prospective client’s kitchen table.

He’d had such success working this way that I can’t blame him for not wanting to change course: He’d bring the sheets back, I’d translate them to AutoCAD and the process would move along from there. 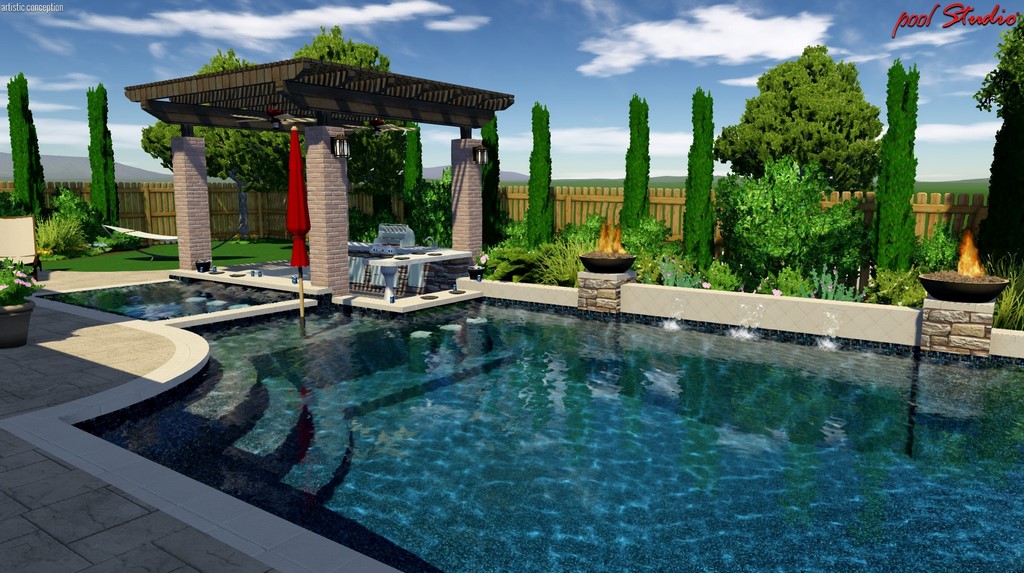 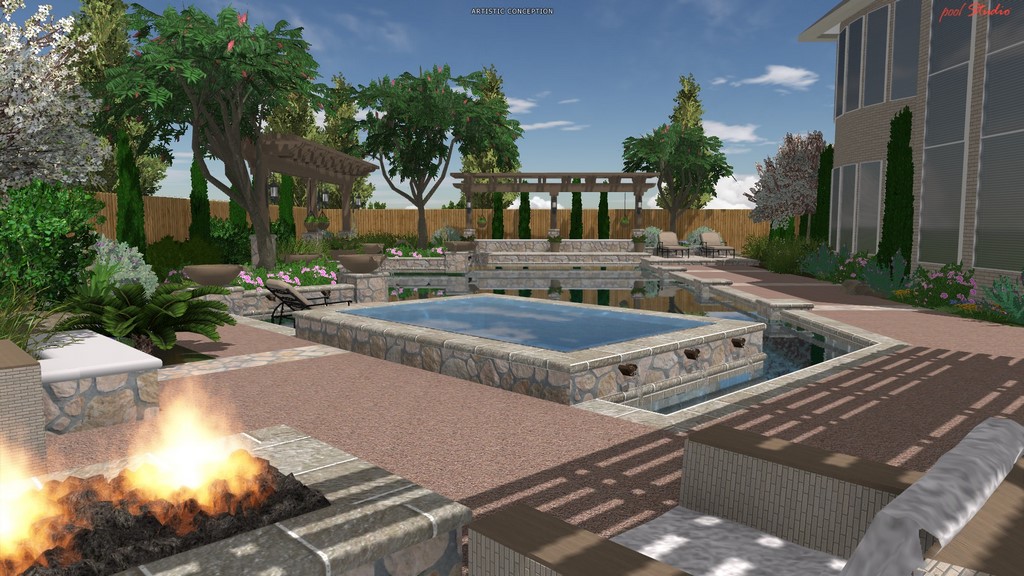 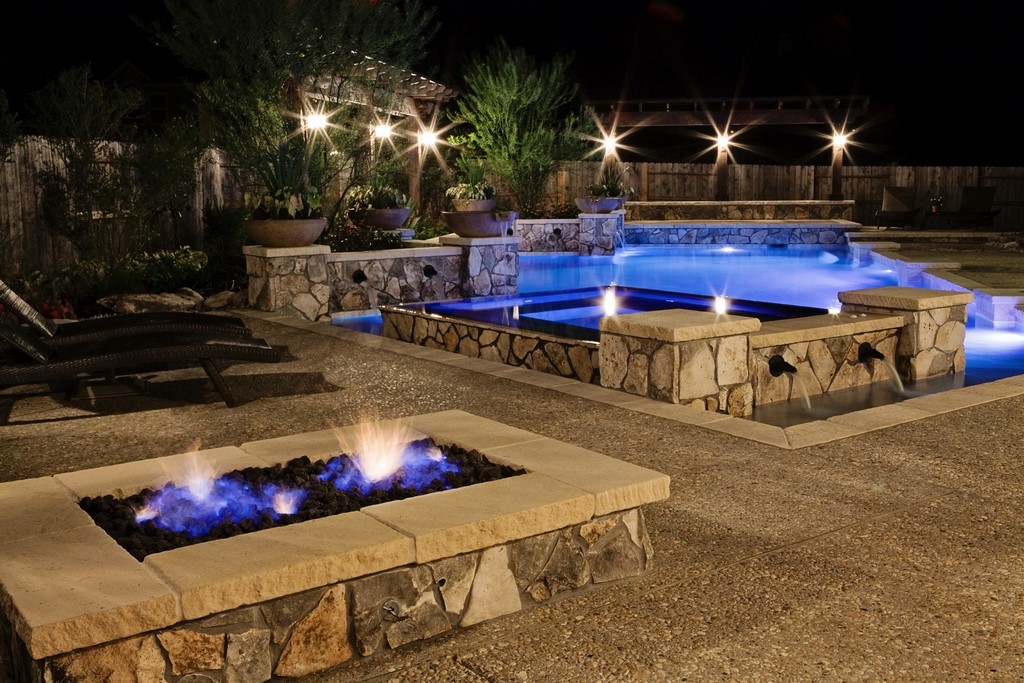 But real change was coming: About a dozen years ago – and a couple years into my participation in the family firm – our business was among those approached for advice by the startup team at Structure Studios, which was developing a software system called Pool Studio. They were also in Henderson, right down the street, and given what I already knew about CAD systems, I was perfectly positioned to get involved in testing the software and doing what I could to nudge the system’s developers in the right directions.

To say I was in on the ground floor with the system would be understating the case.

I applied myself to this new design tool at every opportunity and did all I could to get good at it. I also did what I could to get my father up to speed, but he kept on succeeding with the hand-drawn designs he’d skillfully generate in front of homeowners. As always, he’d bring these drawings back and I’d essentially trace the results – but now into Pool Studio instead of AutoCAD.

So there I was, stuck with feet in two worlds. I was completely won over by computer-design technology, but that wasn’t the direction my family’s business was heading. I have to confess that there were times when I was more than a little restless.

To be sure, the early versions of the software (both AutoCAD and Pool Studio) were limited in comparison to the imagination of a skilled, experienced draftsman, but as a digital-only designer, I didn’t perceive the system’s boundaries the way ink-and-paper folks did. In fact, I’d learned my way around the software so well that the constraints they perceived never, ever held me back.

Then came the Great Recession: The Las Vegas market was hit particularly hard by the collapse of the housing market, and our business suffered dramatically as a result. It sounds like an exaggeration to say we were working twice as hard to get half the work – but that was the situation in a nutshell.

To make ends meet, I started taking on freelance projects, developing design ideas that were sent to me by people who’d become aware of my skills with digital design. One of my clients became a friend and kept telling me about all the opportunities for work where he lived in Texas. Eventually, our relationship grew to a point where he made me an offer, so I moved to Texas in 2009 and joined Sunset Pools, a computer-friendly design/build firm based in Katy, a town on the outskirts of Houston.

I now work at pool designs all day every day on a company computer, and one result of this steady diet is that I’ve gotten very fast at what I do. This speed ultimately gave me an opportunity to resume my freelancing outside of working hours: Once again, designers and builders are sending me their drawings or ideas or blank canvasses and, at home in the evening, I use Pool Studio to generate presentations and construction documents. 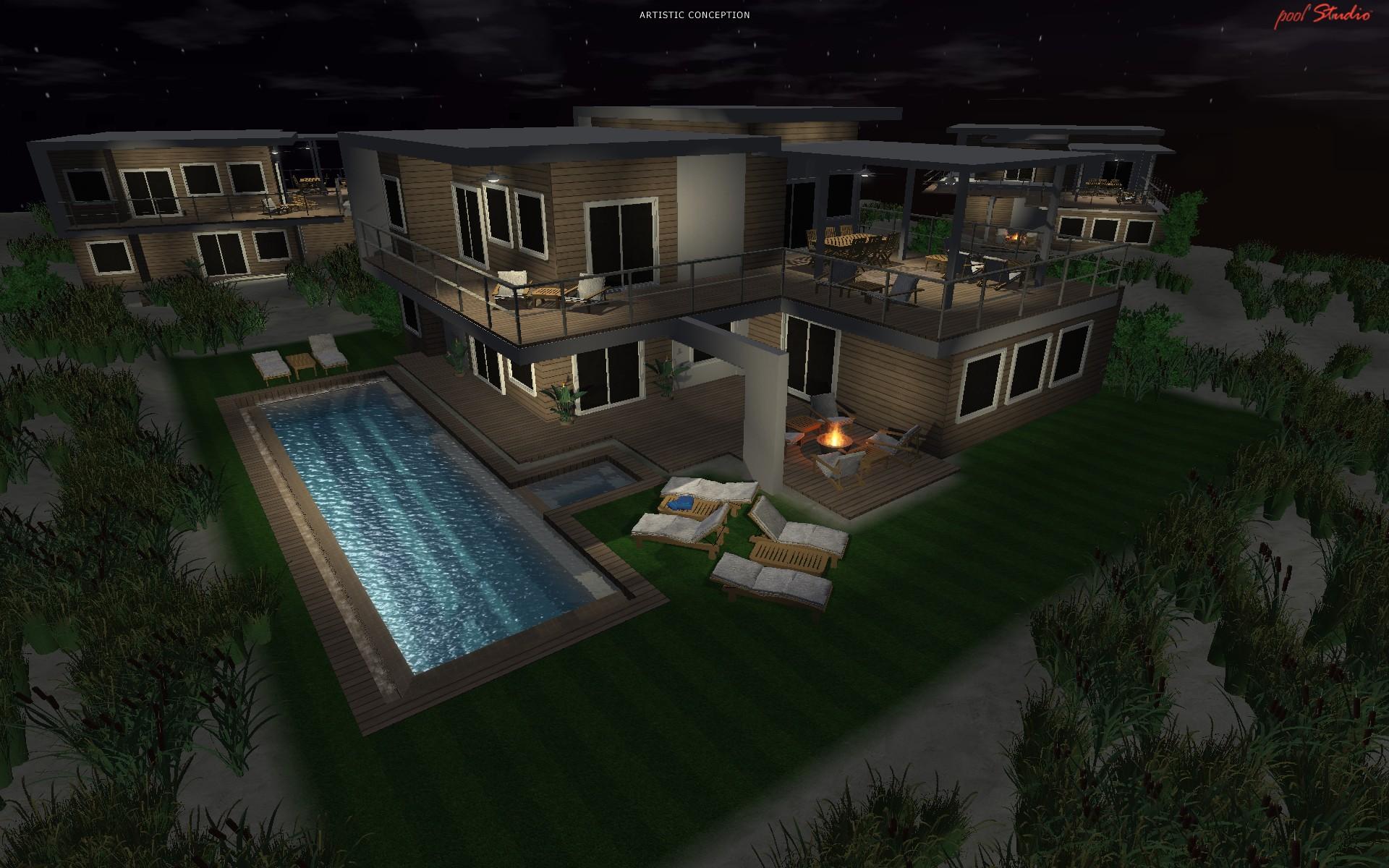 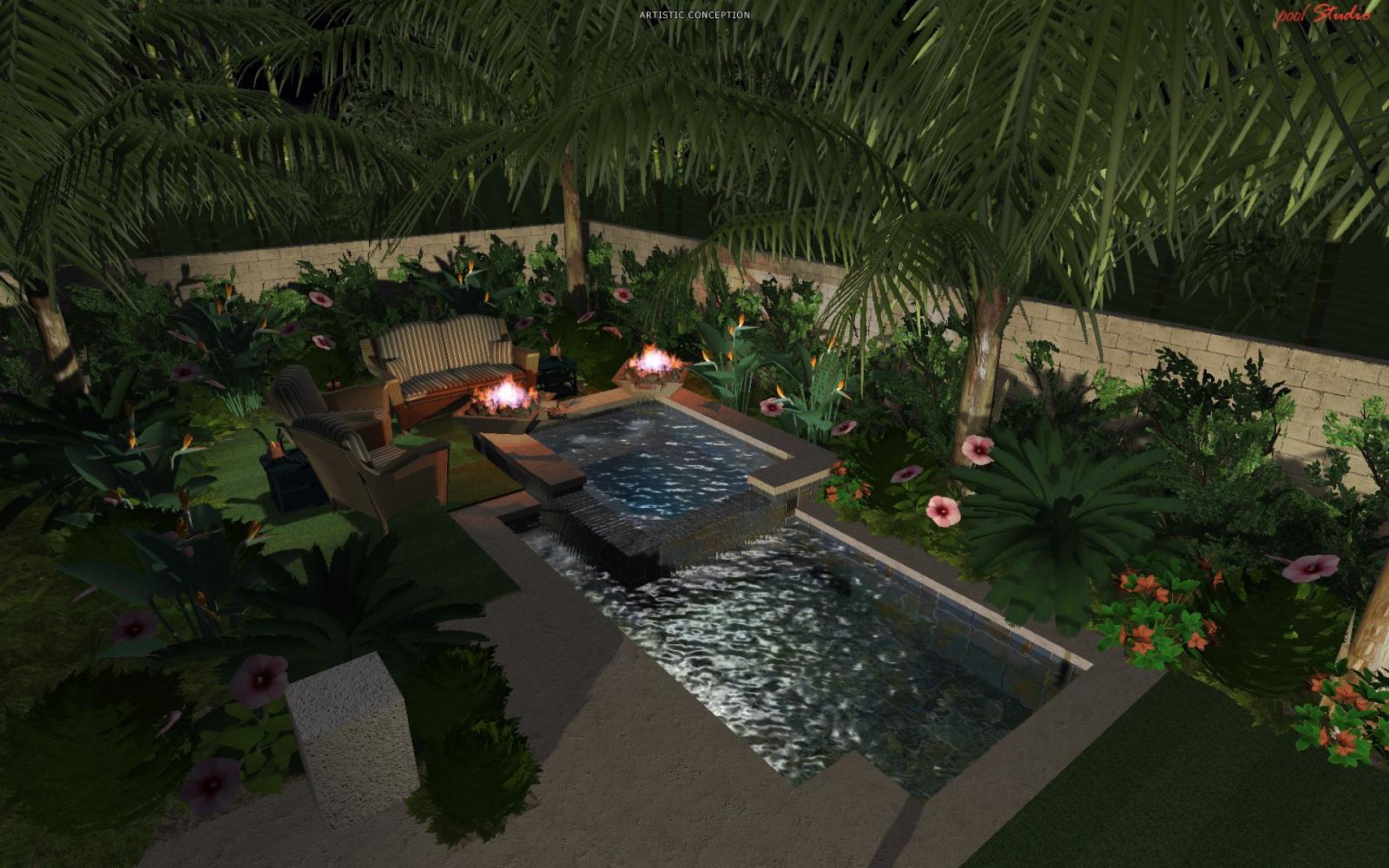 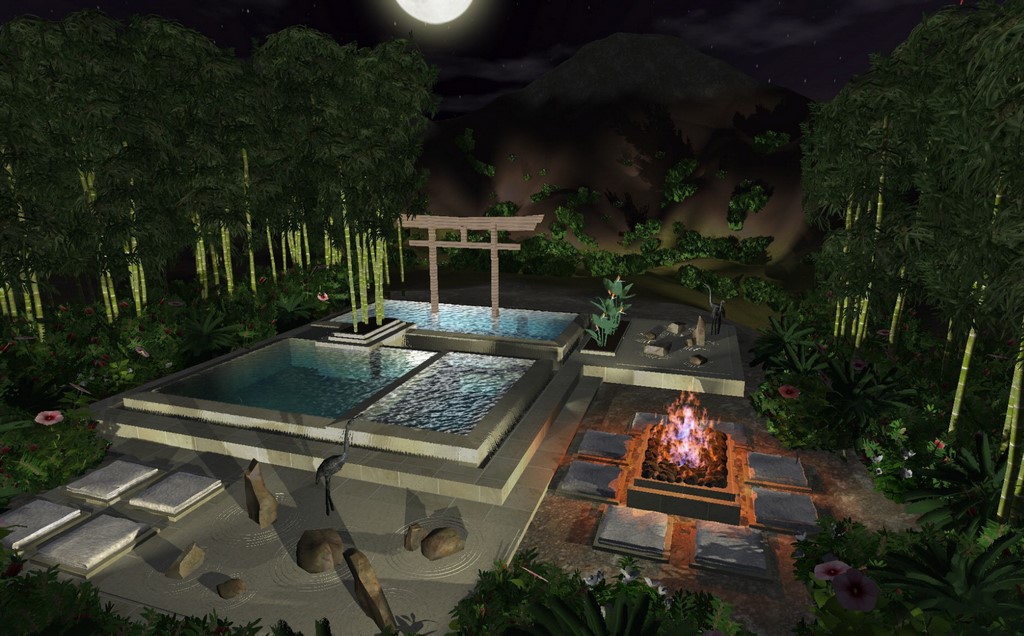 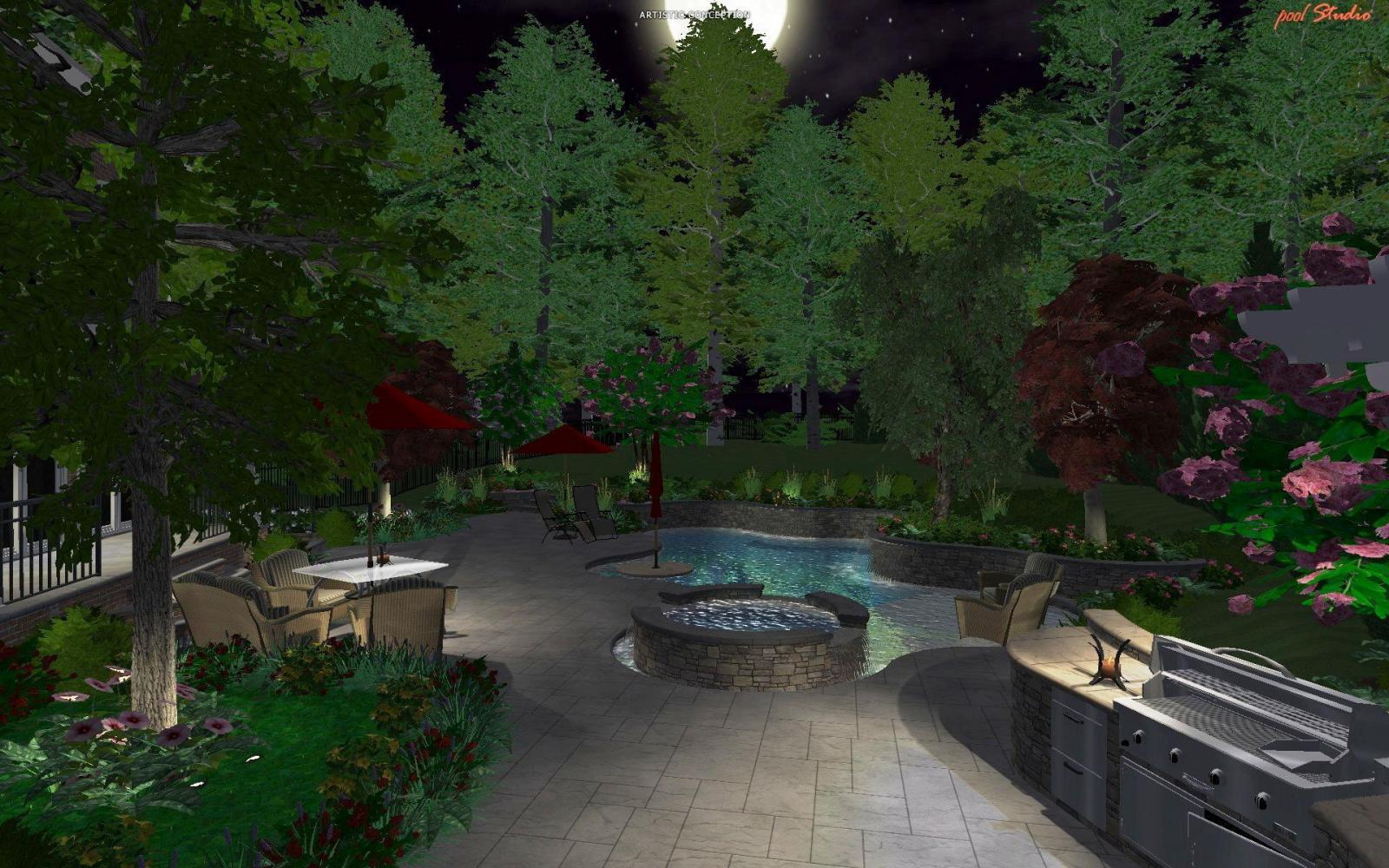 After a while, however, the hours I was putting in to make it work both as an employee and a freelancer took a toll: I was tired and began to feel that I wasn’t meeting my own high standards in some of the designs I was delivering. But rather than cut back, I resolved to dig in even deeper and learn in every way I could how to get faster and more proficient.

That’s where I stand today, about as quick and nimble as can be, but at the same time mature and skilled in my capabilities as a designer of watershapes and the spaces that surround them.

I count myself lucky that I came along at a time when I could put both my feet on one side of the design divide, working exclusively in the digital realm with like-minded designers and builders.

I can see how valuable that single focus is when I work with designers who have long backgrounds at drafting tables: They get frustrated because, as they see it, the computer doesn’t respond to their thought processes and needs the way ink and paper do. They see a universe of roadblocks and limits and smack up against them virtually every time they sit down at a computer workstation.

By contrast, I never was much of a ink-and-paper guy and haven’t ever had any sense of limits when it comes to computer technology. I’ve never thought, as traditional designers do, that it’s been necessary to “constrain” my ideas and thought processes to work with a software system.

Quite the contrary: I’ve experienced a literal explosion of ideas and design possibilities because I know my computer-design toolkit as well as a skilled draftsman knows his straightedges and compasses. Better yet, I have no internal conflicts to deal with – none at all.

The cool thing about this technology is that it’s constantly evolving and, generally, improving day by day. Moreover, I’ve found that the technicians behind the software are responsive to user feedback and bring a problem-solving attitude to the process of refining their products. That’s always a good situation, and it makes me hopeful that my ability to use these tools to deliver great watershapes for all of my clients will only get faster, smoother and more professional in years to come.

Tanr Ross has been sales manager and lead designer at Sunset Pools in Katy, Texas, since 2009, and founded Intelligent Blue, an independent watershape-design firm, in 2011. A long-time advocate for computer-assisted design technology, he has served as an adviser in development of the Pool Studio software system and has taught a number of courses in its efficient, effective use. In 2014, he was recognized as designer of the year by the Houston-area chapter of the Association of Pool & Spa Professionals.