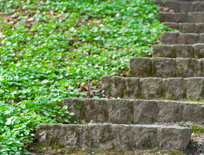 Steps and landings are among the most common of all elements in landscapes. Just about any setting involving a vertical transition will include steps of some sort, and there’s no better design element than a landing to establish a means of changing directions or looking out on a desirable view.

Such elements can be highly formal, trimmed out with fancy pilasters, balustrades and railings. Or they can be extremely organic, composed of nothing more than flat stones or repurposed broken concrete. And the possibilities between those extremes are virtually limitless.

All too often, however, these elements enter into projects as afterthoughts — things to be defined and implemented after other, “sexier” issues are settled. Sometimes that works, but often it’s a huge mistake, especially with steps. First, steps are important visually, and our attention is often drawn to the transitions they embody. Second, people use them to go up and down, which presents significant safety hazards depending on the individuals’ ages, physical abilities and a long list of other factors.

For the moment, let’s set aside the aesthetics and focus on safety.

Scenario: Fortunately, I’ve never been involved in a lawsuit where anyone filed for damages because they were hurt on unsafe steps (knock on wood!). Just the same, I have seen many installations that take my breath away, not because they’re beautiful but because of the hazards I see.

The most common issue here is improper tread-to-riser ratios, followed by steps being difficult to see because of the way they blend in with the surrounding hardscape, and by steps being built at irregular intervals. Then there’s the immutable fact that the sun goes down — and all too often I find lighting systems that eliminate shadows, making the steps hard to see.

All of these issues lead to potential hazards for people ascending and especially descending these steps. And while safety may be my main concern here, I am aware that lots of steps foster feelings of insecurity in a space. After all, when a person feels obliged to concentrate on their footing they become uneasy, which more or less defeats the purpose of creating great places in which to move around and relax.

Solution: Fortunately, avoiding problems here is not terribly difficult, so long as you observe a few important guidelines:

>> Tread-to-Riser Ratio: This concept is both simple and extremely important. Although it can be expressed in various ways, the industry standard formula is T (tread) = R (riser) x 2 + 1 inch. In other words, the depth of the tread (the measurement from front to back) should be twice the height of the riser, plus one inch.

For example, if you have a four-inch riser, the treads should be nine inches deep. We use this formula plus or minus an inch, which seems to be an acceptable variance within the industry based on the many Web sites I checked for confirmation.

Most codes restrict riser heights to between four and eight inches, the logic being that four inches is a tripping hazard and eight inches is too much for someone going up or coming down. In our work, we typically split the difference and work with six-inch risers and 13-inch treads. These just feel right to most people; in addition, six inches also happens to be a great dimension for stone tile that commonly comes in 6-by-6, 3-by-3 and 2-by-2 configurations.

With treads, it’s also important to keep in mind that if you’re going to exceed the recommended depth, you need to double the depth to accommodate a natural stride. In other words, if a six-inch riser calls for a 13-inch tread, the next interval should be 26 inches.

>> Landings: Although there aren’t hard-and-fast rules, you want to create landings after every sixth step — and at every point where the steps change directions. This gives people brief resting places, comfortable areas in which to change directions and, as mentioned above, nice places to pause and take in the view.

Safety note: Handrails are required in most communities once you have more than three steps. If you do not want a handrail or do not think one is required, then set a landing at every three steps.

>> Consistency: All steps should be created equal. If you have inconsistent riser heights or tread depths (something I see a bit too often), you’re asking for trouble. Once a person hits his or her stride in going up or down, they tend to stay in that rhythm. If you change the intervals in either depth or height, there’s a strong chance someone won’t accommodate the variation and will trip or fall.

>> Visual cues: Users must be able to see the steps. One of the many mistakes I encounter is that contractors build steps that look identical to the surrounding hardscape. With our steps, we try to vary either the type of material, color, texture or — if it’s concrete — finish in order to make the steps stand out from the surroundings. For our cast-concrete steps, we’ll also typically cut a groove in the tread right by the edge to create an obvious shadow.

As mentioned above, lighting is crucial. Aside from entirely inadequate lighting or no lighting at all, the biggest problem has to do with down-lighting that effectively eliminates all shadows. A number of strategies may be used to avoid this problem, all of which boil down to establishing lighting patterns that show the treads and create shadows on the risers.

>> Traction: There are numerous ways to ensure proper traction, from coating concrete with slip-resistant finishes to selecting stone for natural roughness. The key is avoiding a slick-surfaced material — whether it’s tile, stone, metal or even finished wood — and selecting materials based on how slippery they are when wet.

Lessons Learned: All of these are commonsense issues that can be remedied with a bit of insight and planning. In my book, the most important thing is to consider these project elements in the design phase and follow through according to plan. We have no desire to let these issues slide and set ourselves up to be sued by someone who takes a tumble on an ill-conceived step system. Instead, we want our clients and their guests to move freely and easily from level to level — and to enjoy themselves as they go.