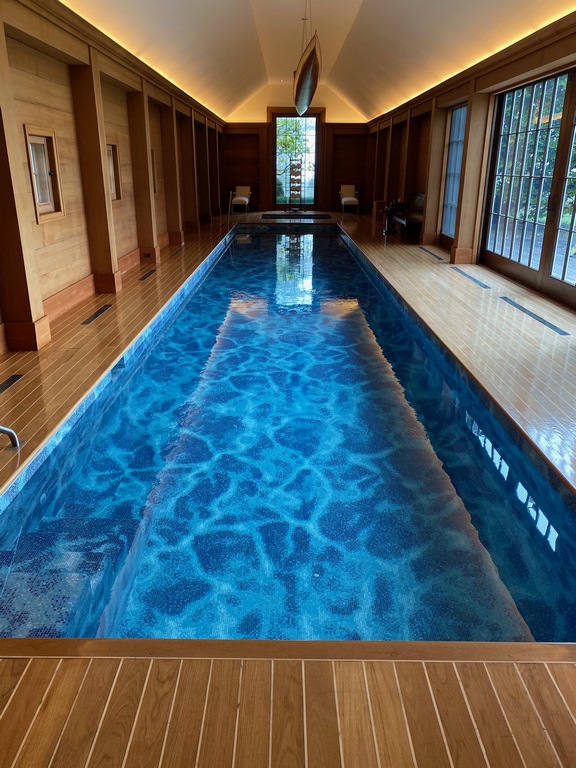 Some projects have a long gestation period, and that was certainly true for the pool pictured here. It’s a lovely private natatorium, featuring a lap pool and separate spa, both with all-glass-tile finishes, located on an extremely high-end waterfront property on East Long Island, N.Y.

It’s a dreamy location to be sure, but when we showed up, the situation with the watershapes was more of a nightmare. We first became involved

about 12 years ago because the owners were struggling with terrible water and air quality. The property manager had heard that we were good at what we do — especially when it comes to water-quality issues — so they contacted us to see if we could improve the conditions in and around the pool.

It’s a beautiful 10-by-54-foot lap pool located inside a luxurious outbuilding with floor-to-ceiling windows looking toward the water. It was only three years old when we came on board, but it had already fallen into a surprising level of disrepair.

On top of the air and water quality concerns, tiles were popping off throughout the pool and especially the spa, and there were all sorts of problems with the equipment.

The pool was reasonably well built, but there were definitely issues with the glass tile, which were constantly popping off. We’re fairly certain there was a problem with the water-proofing membrane and the thinset, resulting in hollows behind the tile and the delamination problem.

The seven-by-10 spa was in far worse shape than the pool, why we don’t know, and we were forced to completely reinstall the tile. We also reinstalled some large areas on the pool floor at that time, as well. We went to great lengths to match the new tile with existing mosaic, which was a complex blend of blues, greens and grays. 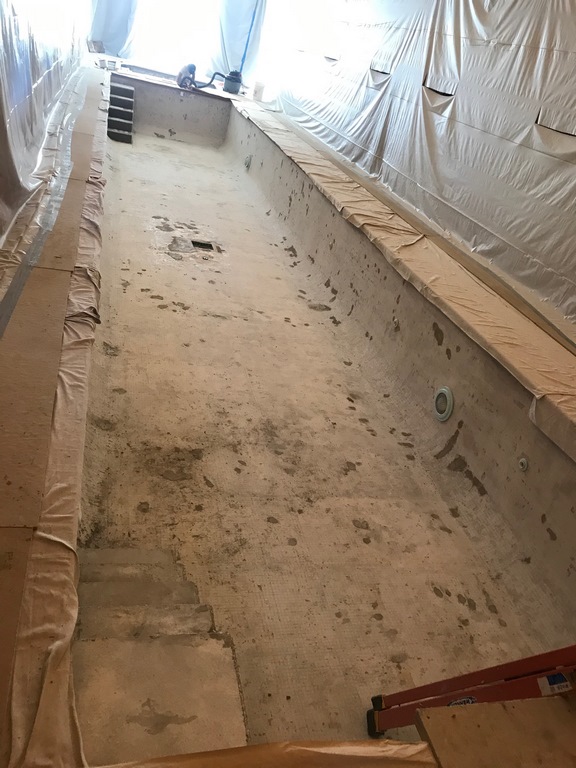 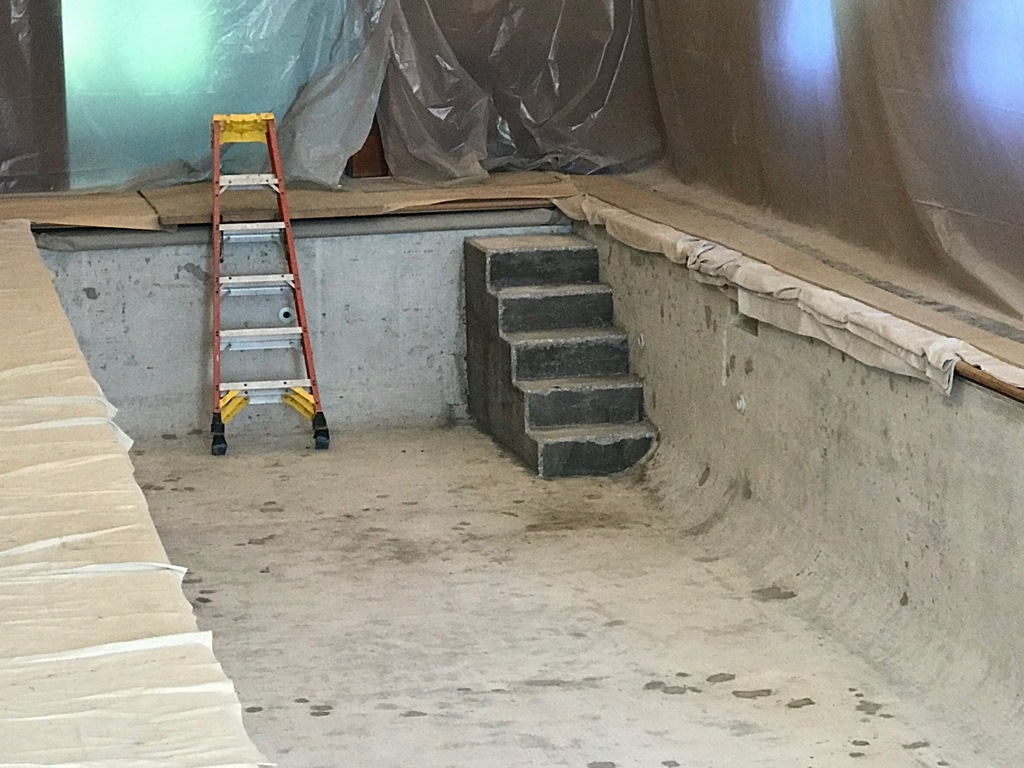 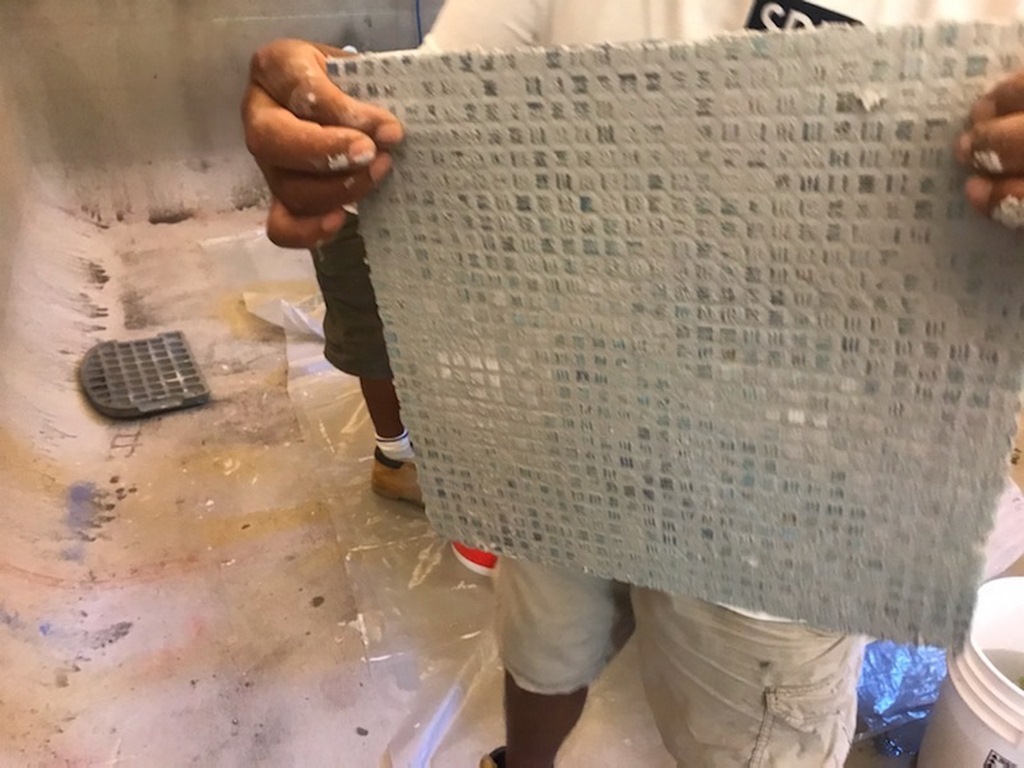 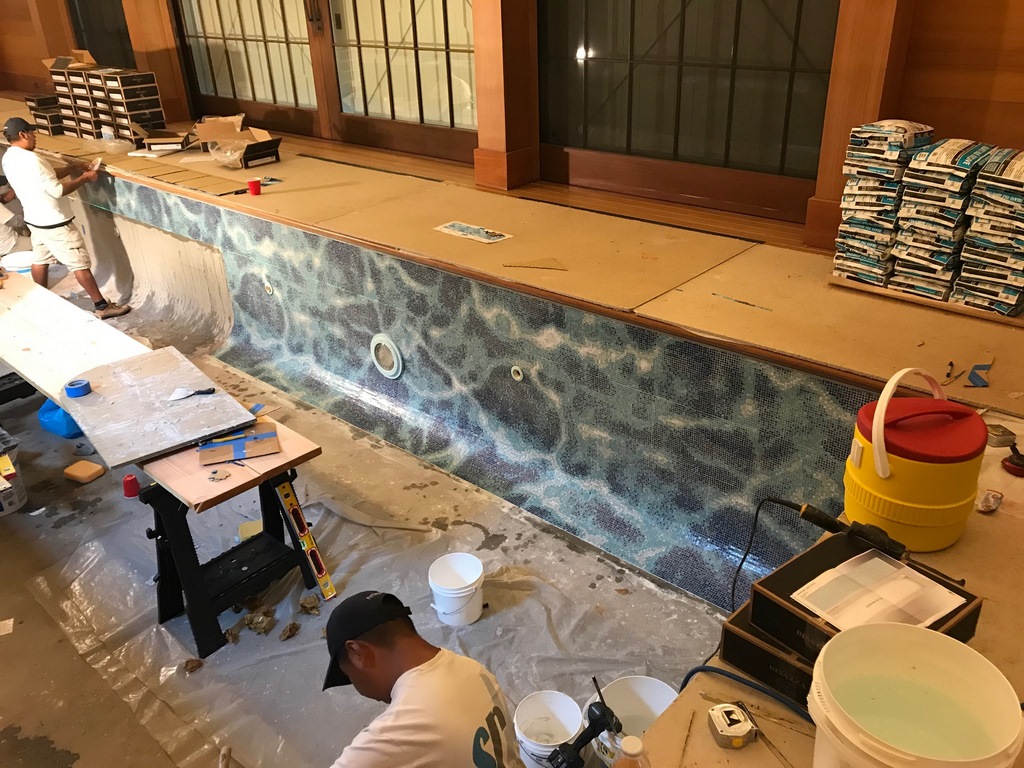 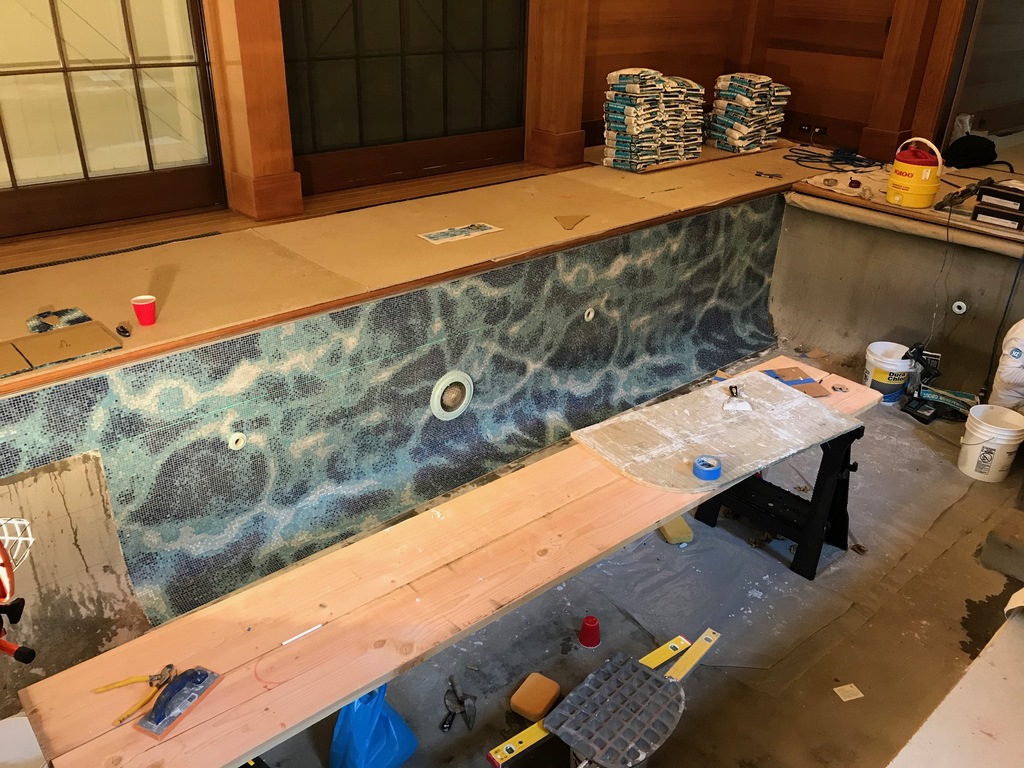 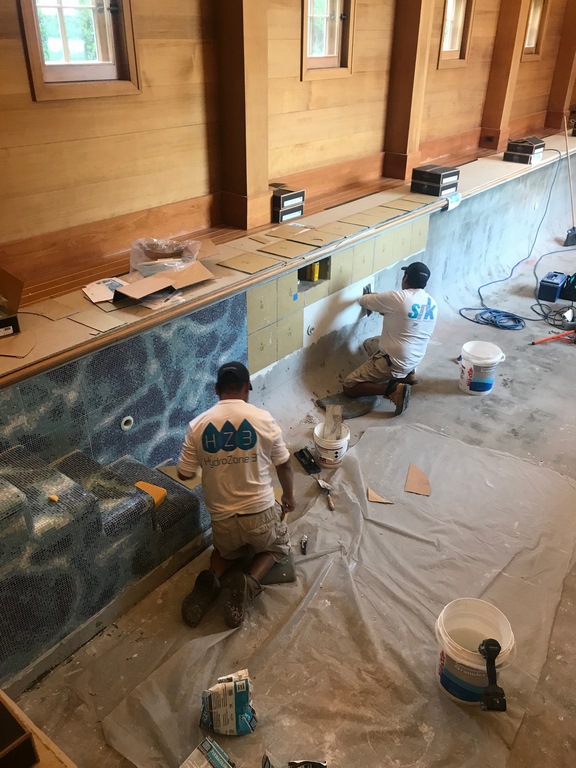 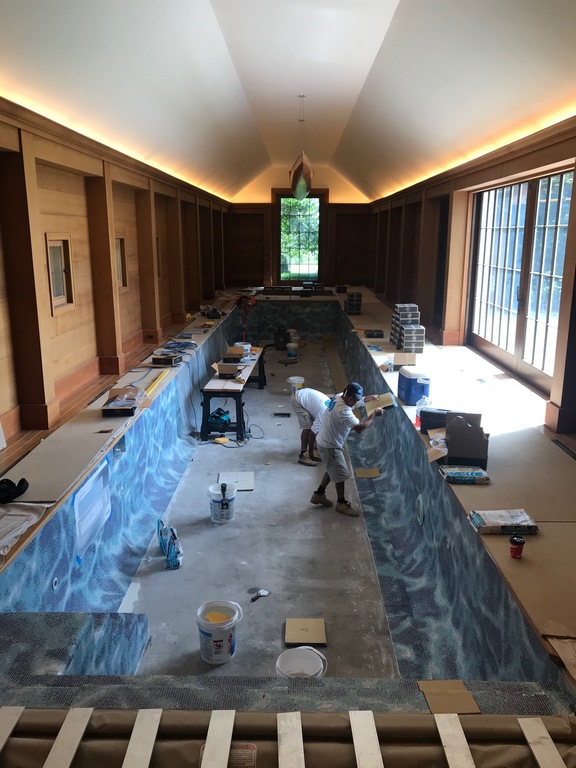 Working with the manufacturer, Bisazza, we carefully mapped out each new section with precise diagrams of the tile patterns. We made mock-up panels and carefully mixed and matched the grout. But try as we might, it was never a perfect match, especially the grout, which had prematurely aged in the aggressive water chemistry.

On the equipment side, there was a pair of heat exchangers that were corroded and a bunch of other small problems that we corrected with the valves and control system. The watershapes’ saltwater chlorine generation system was barely working. We added variable-speed pumps and reconfigured the equipment pad plumbing to accommodate a new treatment system.

At that point in time, we were delving into ozone and UV technologies in an effort to meet the growing demand for chlorine-free pools. Plus, we were seeing a wide range of problems with saltwater systems and were eager to head in another direction.

We insisted they abandon the salt system as a condition of our service, and suggested adding seven-gram-per-hour ozone generator and a low-pressure UV system. We set up the system and let the client try it for a month, in a “try-it and buy-it” arrangement. She fell in love with the water the first time she swam in it. The air smelled sweet and beautiful and water was gin-clear. She immediately wanted the system and insisted we continue to maintain the pool, which we have ever since.

It’s been a happy arrangement, but the system has aged and the pool’s tile finish has continued to fall apart. Two years ago, it came to the point where everyone knew the pool needed to be fully refurbished.

That realization coincided with a complete renovation of the house and the entire property. Redoing the pool became part of the larger property-wide renovation, which meant we were working as part of a larger project team including a general contractor and architect.

There are two big parts to the renovation: first, we completely removed and replaced the tile finish in both the pool and the spa. And, second, we’re currently in the process of updating the equipment with new ozone and UV systems. 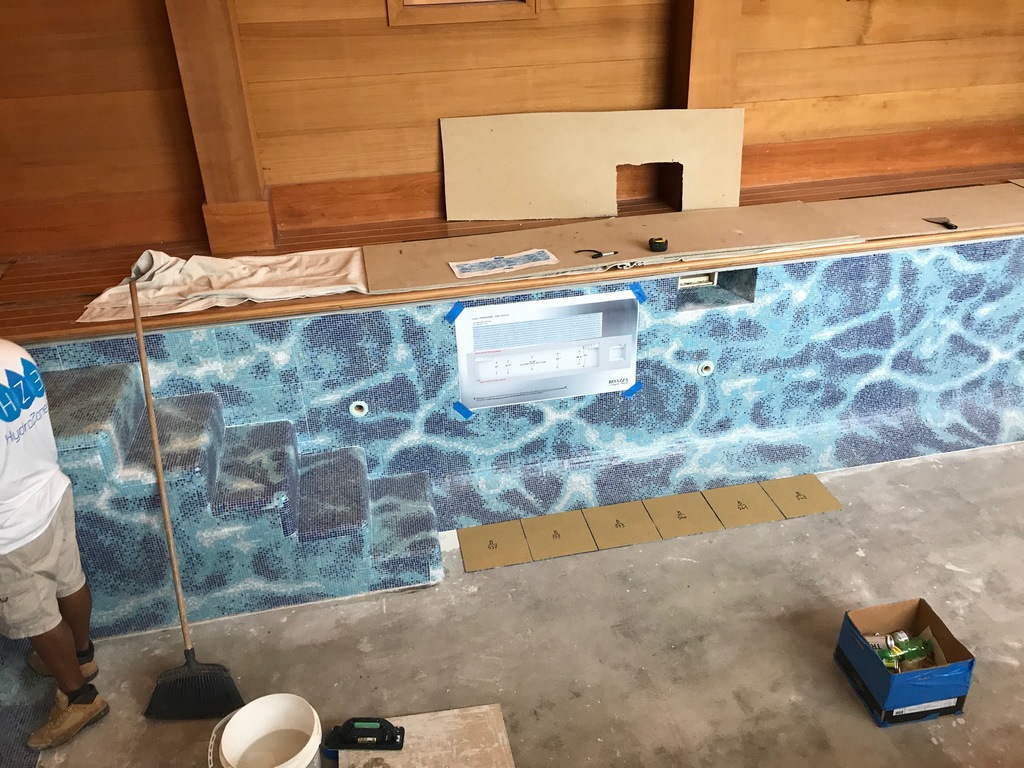 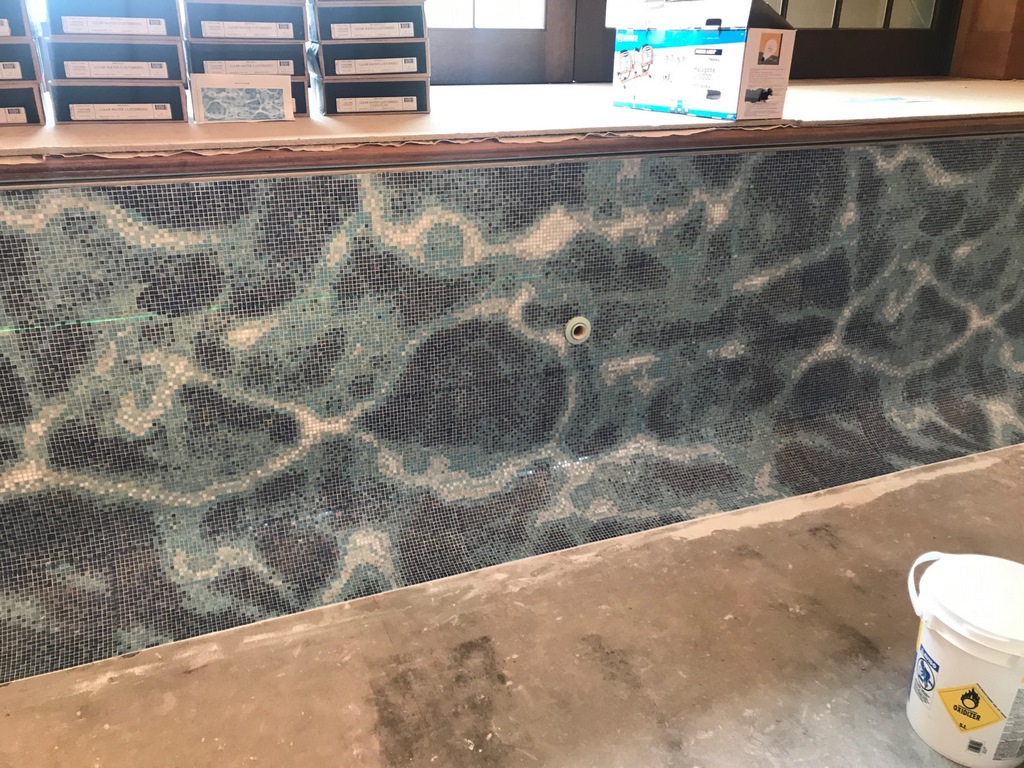 The new tile finish is by any measure a daring work of art. Like the original finish, it comes from Italian manufacturer Bisazza. It’s a special custom mosaic based on a painting by Dutch artist Tord Bootje, who produces these types of ultra-high-end mosaics for the company.

The wave pattern was the architect’s idea, and I’ll admit that at first, we weren’t keen on it. I thought it might look kind of gimmicky and not harmonize in the otherwise elegant setting. Still, the idea of replicating the light pattern of an outdoor pool in an indoor pool was intriguing. Most importantly, the client liked it and wanted to go forward.

The tile comes in one-by-one-foot square paper-faced panels that are numerically coded and laid out like a giant jigsaw puzzle. The individual tiles are tiny 3/8ths inch with 900 per sheet. In all, there are 1.29 million tiles in the pool and spa.

It’s precise work that involves prep, padding (float) and layout. We chalked out every one-by-one panel, including the grout lines, all to be sure it was lined up perfectly. In this type of mosaic work, there is literally no room for error.

The paper-faced panels were fragile and we didn’t want to handle them more than was necessary in order to avoid knocking off any tiles during installation.We laid the tile panels out around the pool in piles that were stacked in the order they would be installed. We only handled them three times: when they were removed from the box, when they were stacked and then placed in the pool. Doing so helped minimized tiles falling off the paper-face mounting due to over handling, and helped speed up installation. That said, we still had three of our top guys installing the tile for four months straight.

The surface around the pool is a beautiful “boat deck” style wooden floor. It’s basically irreplaceable so we had to make sure it was completely protected during the tile installation process.

We covered it with a product called Homasote, which is actually an acoustic panel product. It has fantastic absorption properties so no moisture would be trapped against the wood. We used two layers of Homasote and then layers of plastic between them, covering both the floor and the walls. On the equipment side of the equation, we are in the process of upgrading the set including a dehumidification system and new ozone and UV components. We are also upgrading the filter system, moving from cartridge to sand with activated glass media. (We currently have a “loner” system on the pool.)

Part of the renovation involved cutting a spillway, or a runnel, from the spa to the pool so that we could intermix the circulation and essential dilute the spa, which further supports water quality.

There’s also an outdoor pool on the property that’s undergoing a similar renovation, including a new tile mosaic finish and all new equipment, which we should be finishing up in fall. Suffice it to that the client’s satisfaction with the indoor pool has helped us move forward with the outdoor vessel.

Even when the entire mosaic was finished, we all still had our reservations about it – but then we added water. Much to our delight and amazement, the waves look fantastic underwater. Whether the water is still or moving, the refraction slightly distorts the wave pattern giving it an almost animated quality. The water makes the waves come to life, and it’s beautiful.

Now, the clients swim in a dynamic work of moving art.

Shortly after we filled the pool, when the system had a few days to “polish” the water, the tile mosaic finally “popped.” The undulating waves with the reflections from the windows and skylights worked together to create a surprisingly complex visual spectacle.

As it turned out, the waves were just what was needed to bring the space to life.

Steve Kenny is founder of SRK Pool Services, a pool design/build and service company based in Wainscott, N.Y. He has more than 25 years’ experience studying and finetuning water chemistry in an effort to generate the best possible experience for his customers. He is passionate about and devoted to the science, methods and art of ensuring impeccable water-quality condition. He is a lifetime sailing enthusiast, published author and photographer.