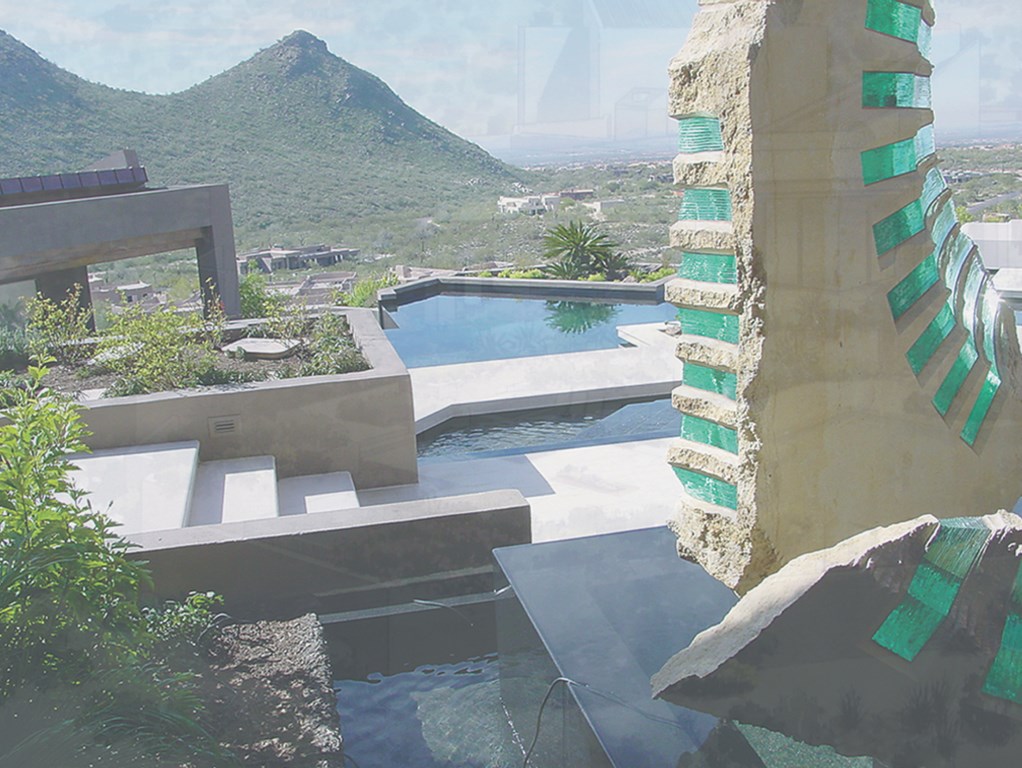 One of the things I like most about working with water is that it makes statements that don’t require much verbal explanation.

In fact, I like to think that the projects I build speak volumes about my clients’ desire for something creative and interesting. They also speak to the point that most of my clients grant me the freedom to give my very best effort, both aesthetically and technically, without many constraints.

Not all the work I do is so modern in style or approach as the project pictured in these pages, but this one illustrates a principle that’s become a hallmark of my designs: I’m inspired by the flow of water and coming up with creative ways to govern its movement from one level to the next. As I work, I also enjoy finding new ways to use water to create visual links between my watershapes and the landscapes, architecture and views that surround them.

In this case, my clients wanted multiple water effects that harmonized with the complex geometry of their home – a good starting place. The basic concept includes a black-and-white hardscape with subtle landscaping touches throughout – nothing overstated or gimmicky, just an elegant look that fits with the surroundings.

As completed, the design includes three bodies of water that interweave with the hardscape and architecture while taking advantage of the property’s slope and the beauty of the surrounding Sonora Desert. It’s all on multiple planes, moving the eye across the watershapes, planters, stairs, pathways and decks, across interweaving repeated shapes and effects – and always ending up in distant desert views.

The first composition sits on a 6-by-12-foot water pedestal – a 360-degree perimeter overflow vessel finished in black absolute granite. The sculpture is centrally positioned in the view through floor-to-ceiling windows that line up with the dining-room table inside. 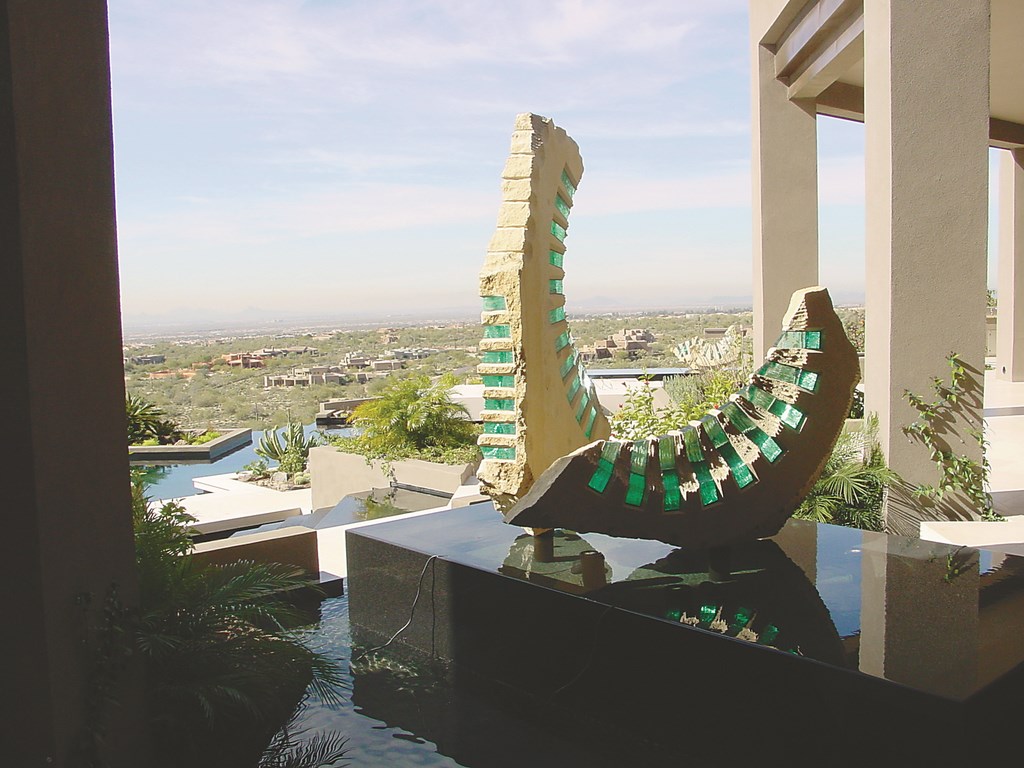 The unusual concrete-and-glass sculpture floating atop the watery pedestal is a unique invitation to step outside and see more of the environment. Once outside, visitors can walk either to the right or left side of the pedestal to get to the rest of the yard, and because of the way it sits on the stairs, they enjoys multiple, close views of the unusual shapes as they go.

The second Riggins sculpture, seen in the background at the far edge of the yard, also sits on an overflowing black pedestal. In this way, an immediate visual link is created between near and far views with both fluid artwork and artful water.

The overflow from the upper pedestal feeds two cascades that fall next to stairways – then disappear and reappear under a walkway, all leading the viewer toward the swimming pool (left).

Directly in front of the pedestal is a broad stair-step cascade (middle). In this case, the steps create reflective surfaces that visually link the surface of the pedestal with the surface of the swimming pool below. I like using these step cascades for a number of reasons, not the least of which is that they look like a series of small vanishing edges that lead the eye from one elevation and surface to the next. 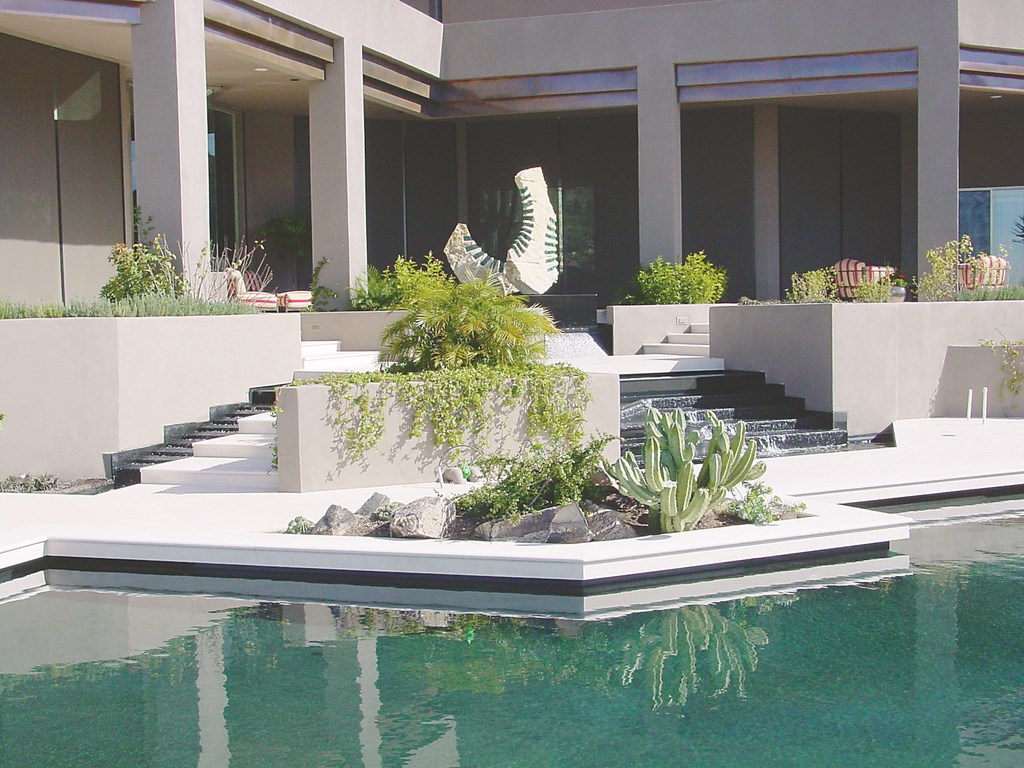 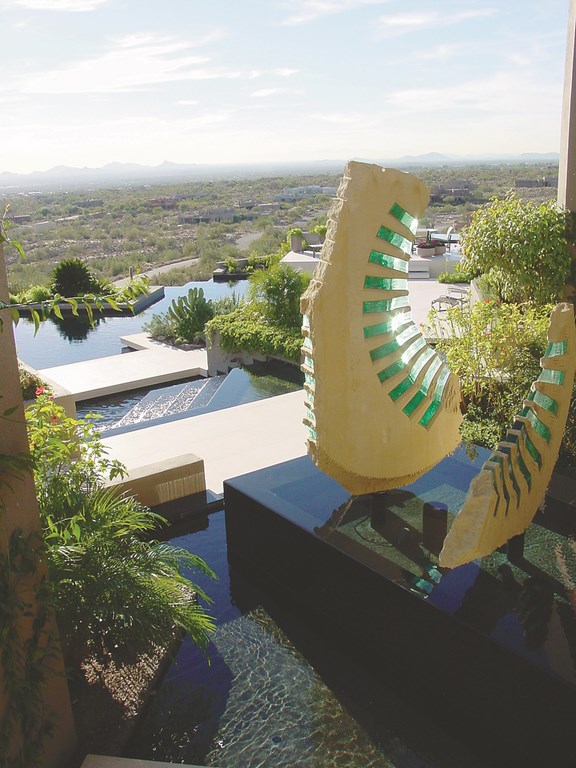 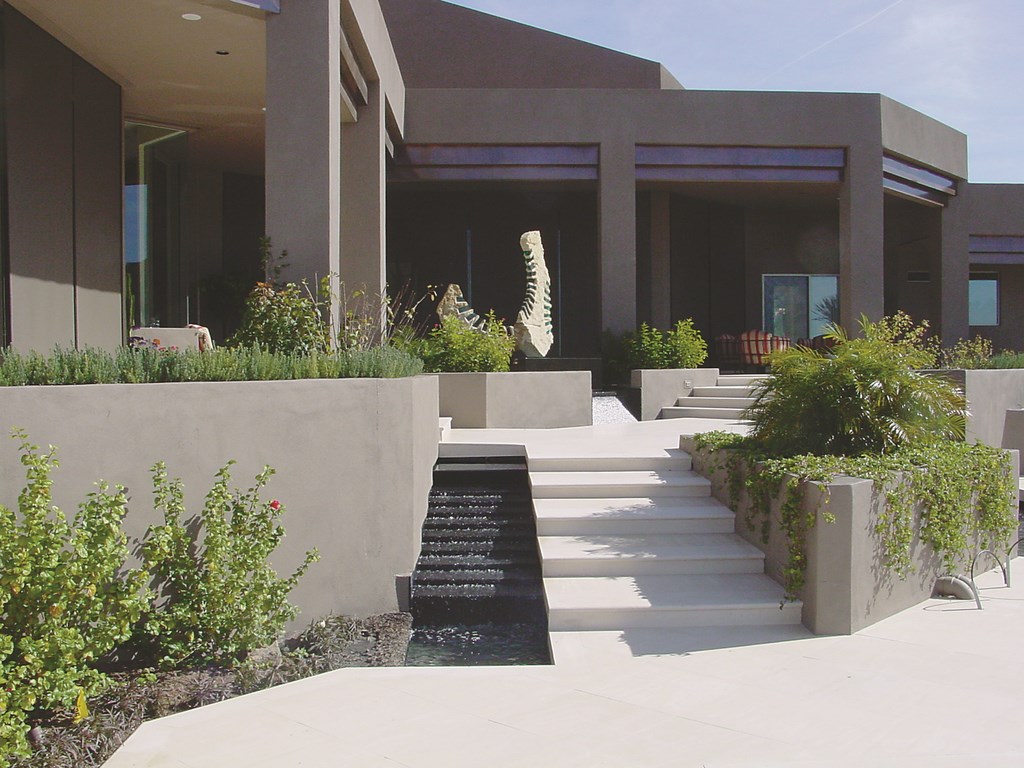 To the right is a smaller stair-step cascade that follows the stairs that lead from the upper deck to the swimming pool area (right). The water appears and disappears beneath the decking, which is cantilevered slightly over this waterfeature. The effect makes it appear as though the water flows under the deck and into the pool; despite this visual link, however, the pedestal and cascades have a separate circulation system.

The earthen-colored plaster used on the planters was achieved by mixing mulch and soil directly into the plaster mix. This softened the blacks and whites and serves as a visual bridge to the desert environs and the numerous adobe-colored structures seen in the surrounding area.

As guests move toward the pool along the right side’s step cascades, they head straight for the spa area. The steps leading to the spa are set at an angle to reflect the soft angles seen in the larger cascades. The spa itself has an irregular pentagonal shape – sort of a square with an offset – and is nestled among planters and a large sundeck. 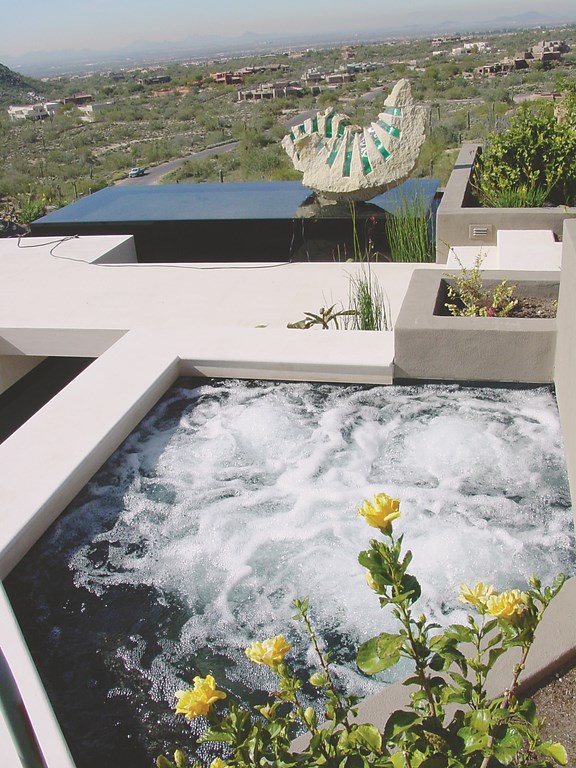 The spa is set just above the level of the pedestal for the second Riggins sculpture, seen here clearly with its perimeter-overflow pedestal of black absolute granite. Again, the idea is to pull the viewer’s gaze into the distant views while visually recalling the sculpture and pedestal on the top level.

The spa originally had been placed on the upper deck, but in setting the elevations we saw that a much stronger vantage point would be found by lowering it to its current level.

The swimming pool sits at the heart of this tapestry of decks, steps, angles and reflective watery surfaces. It, too, is a crisp geometric figure – albeit an asymmetric, irregular one (left). The pool features a black pebble finish, several planters and cantilevered decking that covers the many spots where water appears or disappears from view. 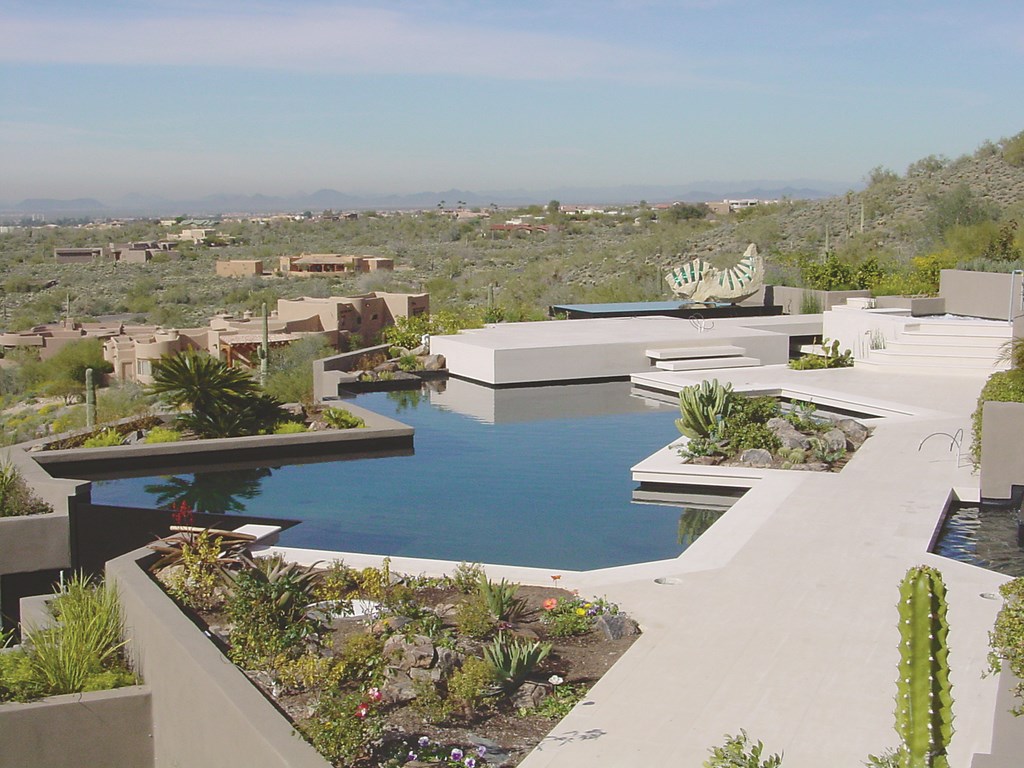 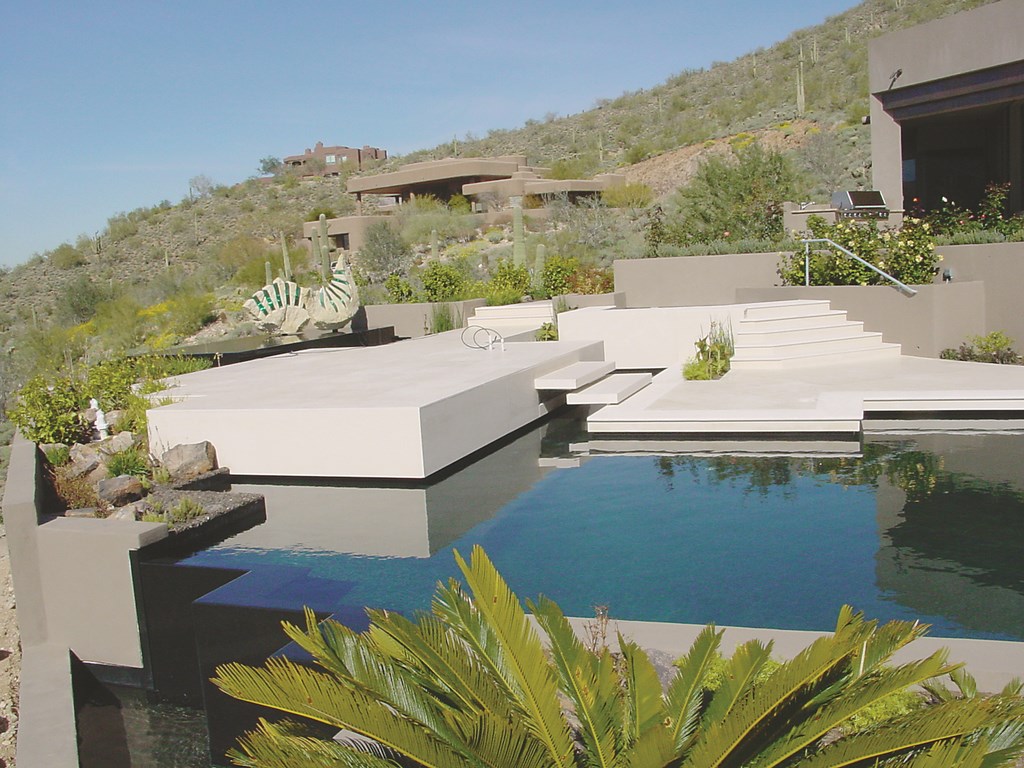 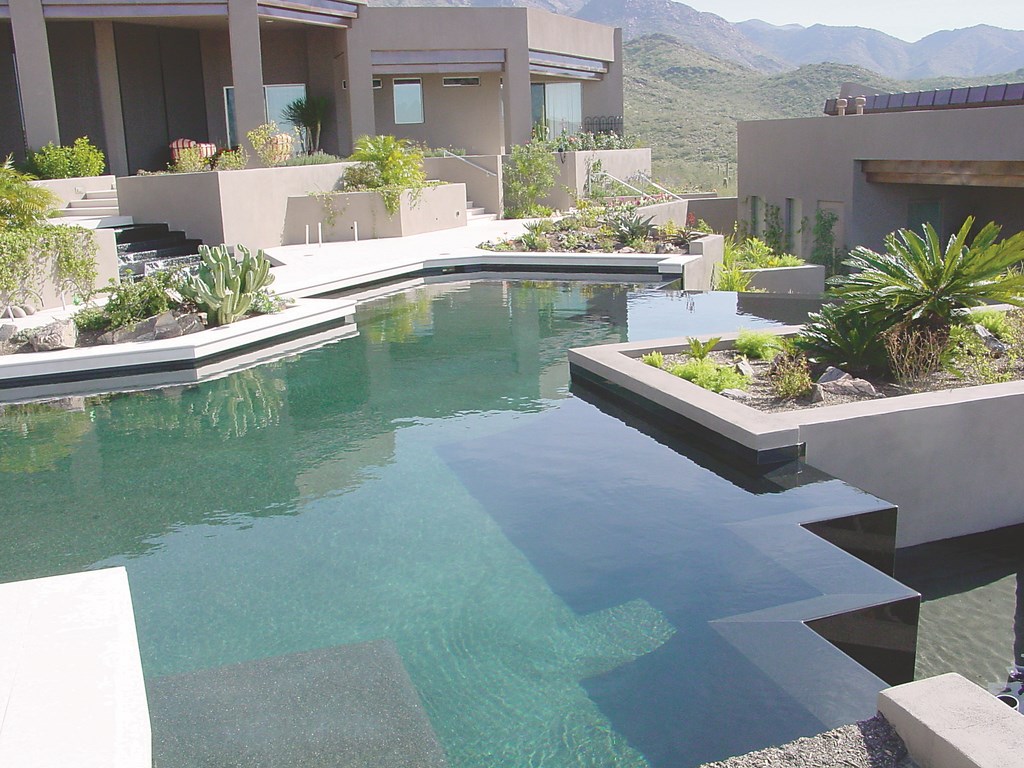 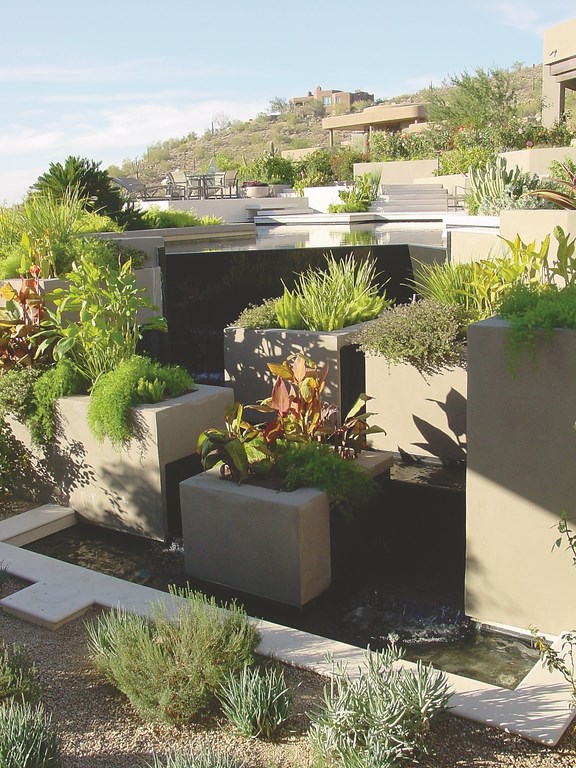 Water from the lower pedestal flows in front of the spa and under steps on its way to the pool (middle left). Water also flows from the pool via two sets of vanishing edges (middle right). In both cases, the cascades are only a few feet wide – a departure from a lot of the sweeping edges built these days but that in this case echo the tight geometry and stair-step lines that appear throughout the design.

The vanishing edge on the left side of the pool eventually flows onto a series of stair-step cascades (right). This waterfeature was developed for the visual and aural benefit of those staying in a guesthouse located below and adjacent to the edge and its catch basin.

Steve Oliver is owner of Creative Water Concepts, a Scottsdale, Ariz.-based firm that designs and builds ultra-high end custom residential pools and spas. He started his career in the swimming pool business 32 years ago, working as a laborer in his hometown of Chicago. He steadily learned all aspects of pool and spa construction and eventually took to designing and overseeing his own projects from start to finish. Seeking a warmer climate, Oliver moved to the Phoenix area in the early 1980s and established his own firm in 1986.