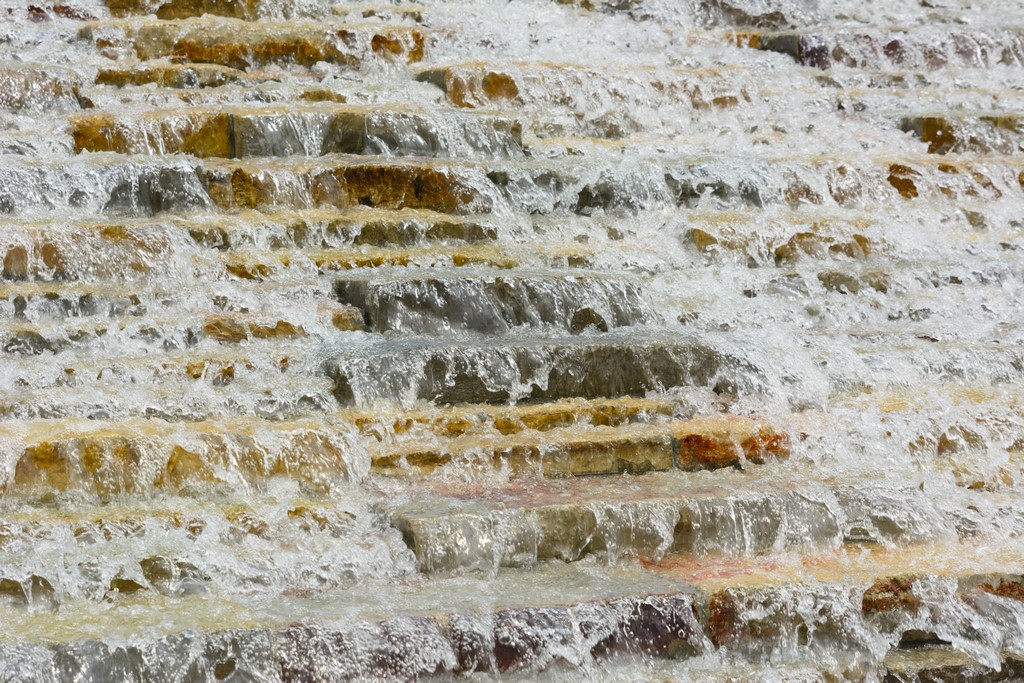 We’ve designed and built lots of fountains and waterfeatures through the years on all sorts of scales and levels, but this one – a definite jump outside the box – will be particularly memorable for all of us.

The client was The Woodlands, the big planned community near Houston. One of its highlights is a 1.7-mile-long waterway that runs through the heart of the development. On one end is the broad Turning Basin, where various water taxis and other boats cut wide arcs before heading back to the other end.

As originally completed, the backdrop for the basin was quite plain – essentially a big embankment with a path at its crest that moved people from a parking lot to a retail area. There was no clear access to the water, nor was there really anything to incline the local citizenry to pause and enjoy the setting.

But that was going to change, and we at Greenscape Pump Services, Inc., of Carrolton, Texas, were part of the team asked to revise the space, change traffic patterns, add a dramatic waterfeature and introduce a new lighting approach – all in one neat package.

The existing Turning Basin had been designed by Sasaki Associates, a highly respected landscape architecture firm based in Watertown, Mass. They were brought on board once again to help create the basin’s new backdrop and were joined on the design team by Crystal Fountains, the Toronto-based designer and manufacturer of fountain components and, more important for this project, of innovative LED lighting systems.

We at GPSI have worked many times in the past with the staff at Crystal Fountains. They recommended us to Sasaki Associates and the owners, suggesting we be brought on board to design a three-cascade waterfeature that was to be side-lit by linear LED fixtures.

We knew this was a novel lighting approach: To that point, waterfeatures of this type had typically been illuminated (if they were at all) by powerful lights at the base of the cascade or by downlights of some kind. The effect of these approaches, ironically, is that a cascade tends to become visually static by night: There’s perceptible motion, of course, but there’s also a sameness and coherence to them that can’t hold anyone’s interest for long.

But I’m getting ahead of myself: After some weeks of design discussion, we were hired by The Woodlands Management Development Co. to design and build the fountain portion of the project, working alongside LJA Engineering (Houston) and Sasaki Associates early on to ensure that the mechanical elements of the waterfeature were accommodated within the overall design of the space. We were chosen not only because of our experience with Crystal Fountains, but also because of our track record of excellence in just this sort of design, engineering and construction process. 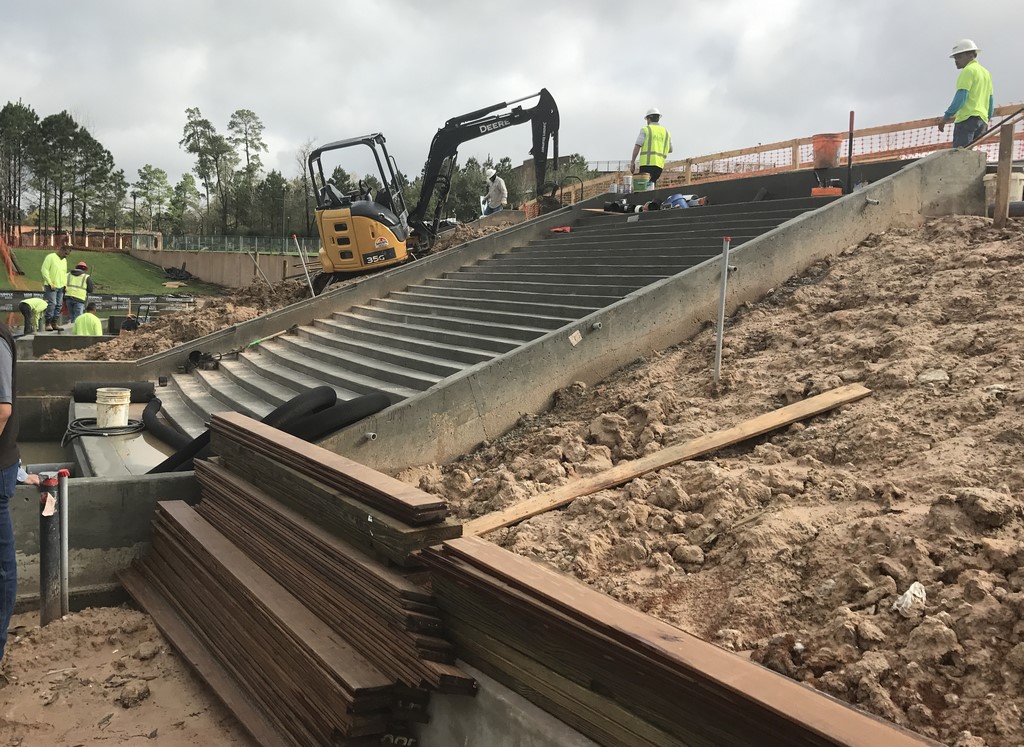 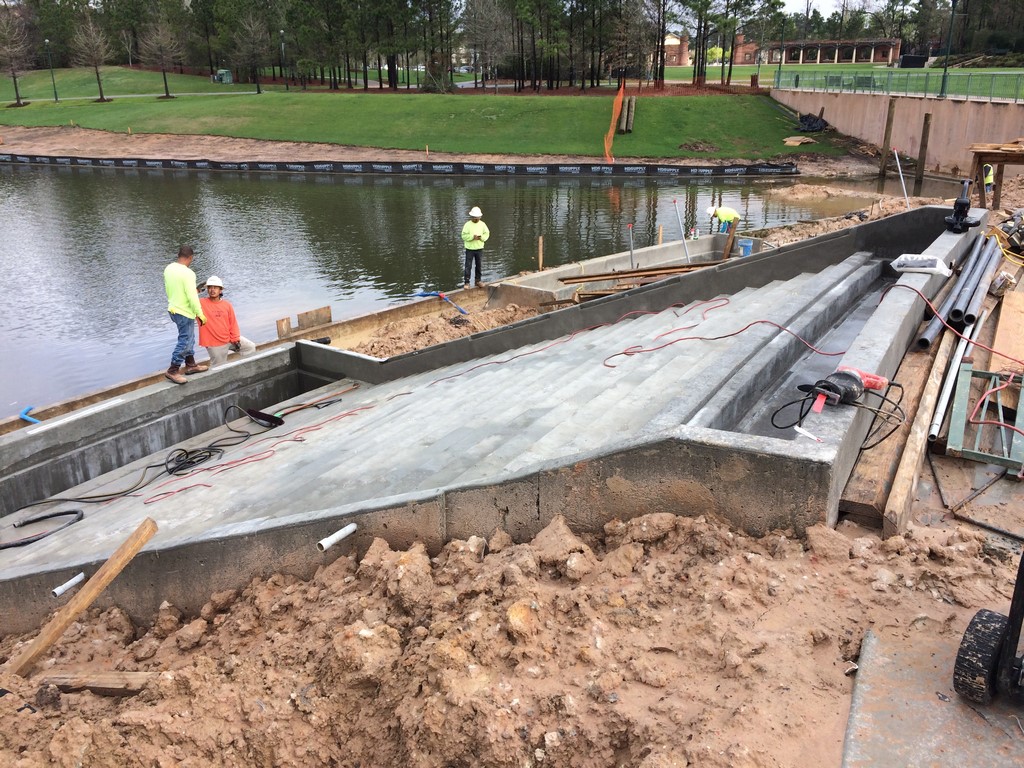 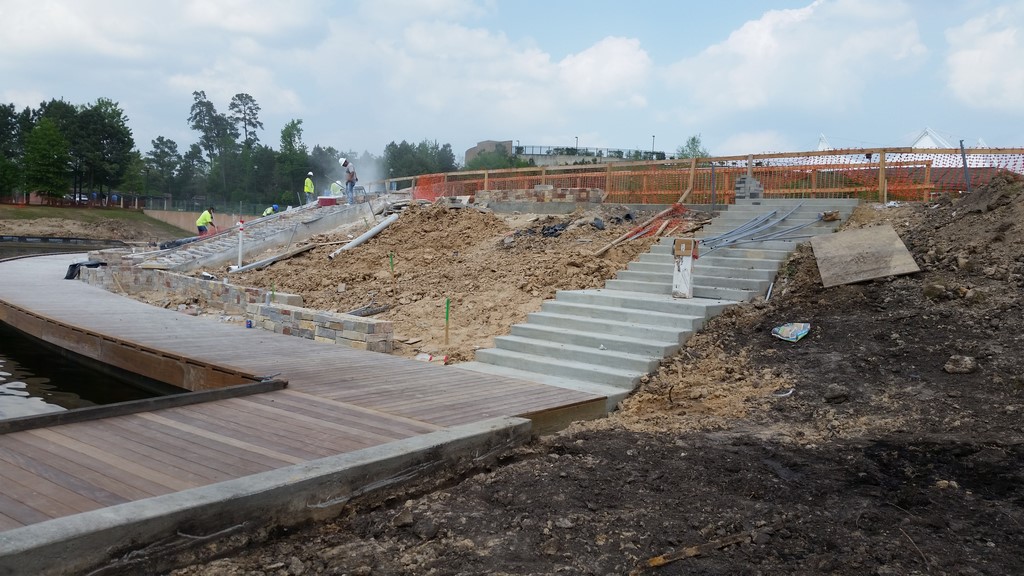 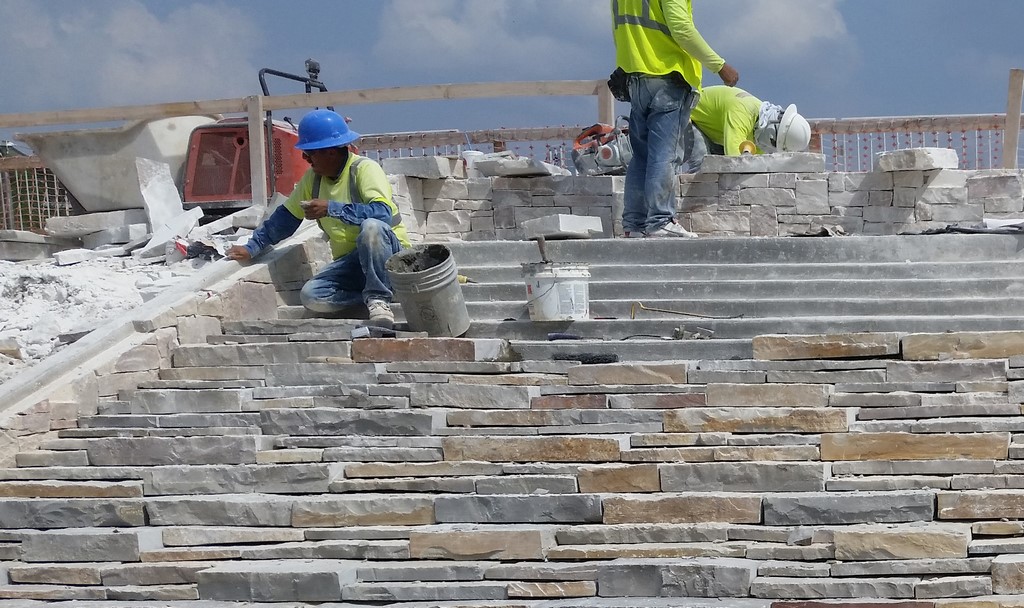 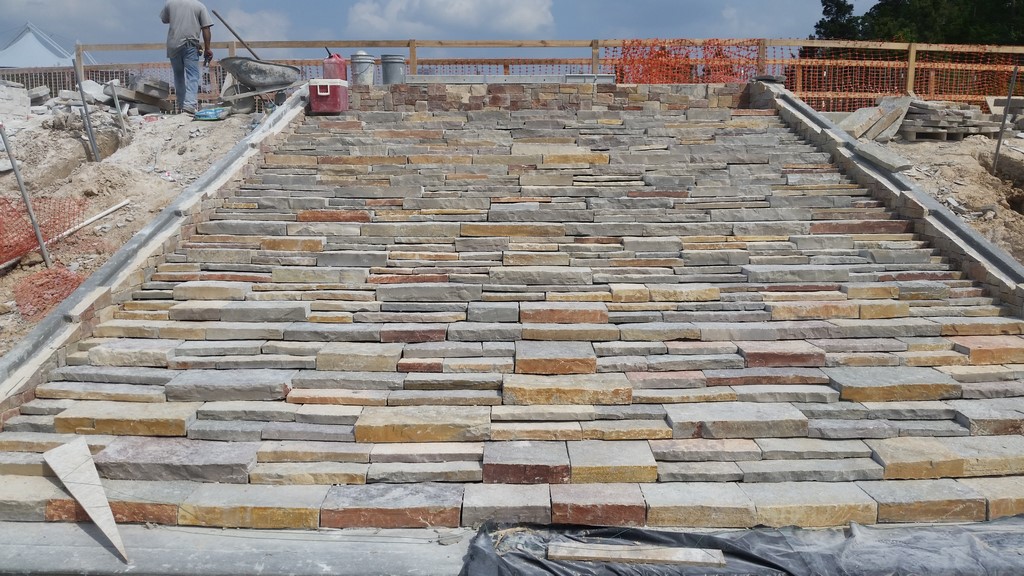 Once on site, we took care of all mechanical, electrical and plumbing (MEP) systems associated with the fountain, selecting and eventually installing all of the pumps, pipes, lighting, filter systems and controls. But we also brought considerable aesthetic and practical experience to bear: Through our past work on inspired water effects, we knew that this exercise was about creating an environment that would transport all observers beyond their day-to-day routines.

In this particular case, we knew that the beauty of the structures and cascades had to be accompanied by a certain level of white noise to separate the space from traffic on nearby roadways – but not so much as to disrupt the area’s sense of tranquility. If the goal was to draw people closer to the water, in other words, we had to make it possible for them to enjoy quiet conversations there to go with the sublime sight of large volumes of water in motion.

Part of the master plan was for the parkland around the Turning Basin to become a main attraction along the waterway – a place where large events could take place and members of the community could gather to enjoy warm days and evenings near the water.

We knew that, by day, the cascades we were installing would be up to the task. Once evening came, the new lights from Crystal Fountains would enable us to take an attractive cascading waterfeature and turn it into a show-style dynamo that would greatly enhance the experience of those who visited the space after dark. This left us with the challenge of devising balanced cascades that would carry the appropriate volume of water to complement the lighting effects while also ensuring daytime interest.

As was mentioned above, the site as we found it was very plain, with little more than a pathway crossing from one side to the other. As it stood, there wasn’t anywhere to pause and enjoy the channel or the future fountain. Happily, the site’s fuller potential began to emerge almost as soon as construction began.

The process was generally smooth: We worked side by side with Houston-based D.L. Meacham Construction Co., the general contractor, and with Kelly Dietrich, the owner’s representative, throughout the process. We also maintained contact with the design team, making recommendations for a few minor changes as we moved along. If we faced any specific challenge, it was the rain – something we see a lot of in the Houston area. But in general, the site was in great shape: The embankment we were working on had apparently been expertly prepared when the Turning Basin was originally built, so we had no problems with water intrusion or the poor soul conditions that can make construction in this area difficult.

Recognizing that flooding was a possibility, we recommended to the team that we steer clear of the traditional below-grade dry-vault system and go instead with submersible pumps placed within the cascades’ bottom troughs. As recent history shows, this part of Texas is susceptible to flooding as a result of hurricanes and major seasonal rain events, and we knew that the waterway and basin would likely be overtopped during even a common five-year-storm event.

The team accepted the recommendation – and it proved to be a good decision: When Hurricane Harvey hit in September 2017, the basin was indeed inundated. But with just a bit of cleanup, everything was running again shortly after the floodwaters receded.

Each of the three cascades is supplied by its own submersible pump, plumbed to the upper troughs via eight-inch lines that feed four individual discharges. The water flows out of the upper trough and down stair-step structures set at a slope of 2.5 to 1 and lined with stone of varying thicknesses in single and multiple layers. This structure gave us the level of action called for in the design, with variations in stone color and elevations bringing substance, texture and strong visual interest to the daytime display.

As I started to relate above, lighting was a key part of this project, basically because it’s difficult to illuminate a cascade effectively. And that was a major concern, given that evening use of the space was a particular goal of the design team.

We worked closely with Crystal Fountains in the programming phase, going after patterns that would conjure visions of the Texas and American flags as well as fields of fire. Sequences were also set up for special events and causes, including the Fourth of July (red, white and blue) and breast-cancer-awareness month (pink). The linear lights were new to the market. Given that novelty, a lot of thought and care went into the installation process and in making certain the niches were all exactly to specification with respect to size, shape and penetrations.

Ultimately and undoubtedly, these lights made all the difference in helping us achieve one-of-a-kind results.

Another key assist came through our company’s service, care and maintenance division, which works on an ongoing basis with many of the waterfeatures we design and install – including this one. To say this adds a bit of internal accountability within our design, engineering and construction divisions is an understatement: These cross-disciplinary exchanges have had great value for us through the years and make each division stronger as a result. It also makes certain that serviceability is a key consideration as projects move forward.

With the Turning Basin, for example, our maintenance staff offered feedback during the design phase, urging reconsideration of an early proposal for the cascades to run using natural water drawn from the basin. It might have been convenient, they said, but the natural-water concept also posed problems with respect to filtration, water treatment and routine maintenance. In the end, the design team changed course and agreed to separate the cascades as a freestanding, recirculating system.

As our work came to a close, it was time to initiate the systems and put the cascades and lights to the test. The water flows were right on target with very little tuning necessary and looked and sounded great from key vantage points around the basin. All it took for the most part was adjusting a couple stones to take care of high and low spots along the faces of the three cascades.

Now everyone on hand (including most of the design team and several representatives of ownership and management) waited for dusk to settle in and offer a low-light glimpse of the cascades. As the experts at Crystal Fountains initiated and ran through the program, I began to think about the design and construction processes and just how great it had been to be part of such a wonderfully collaborative and grandly creative process. 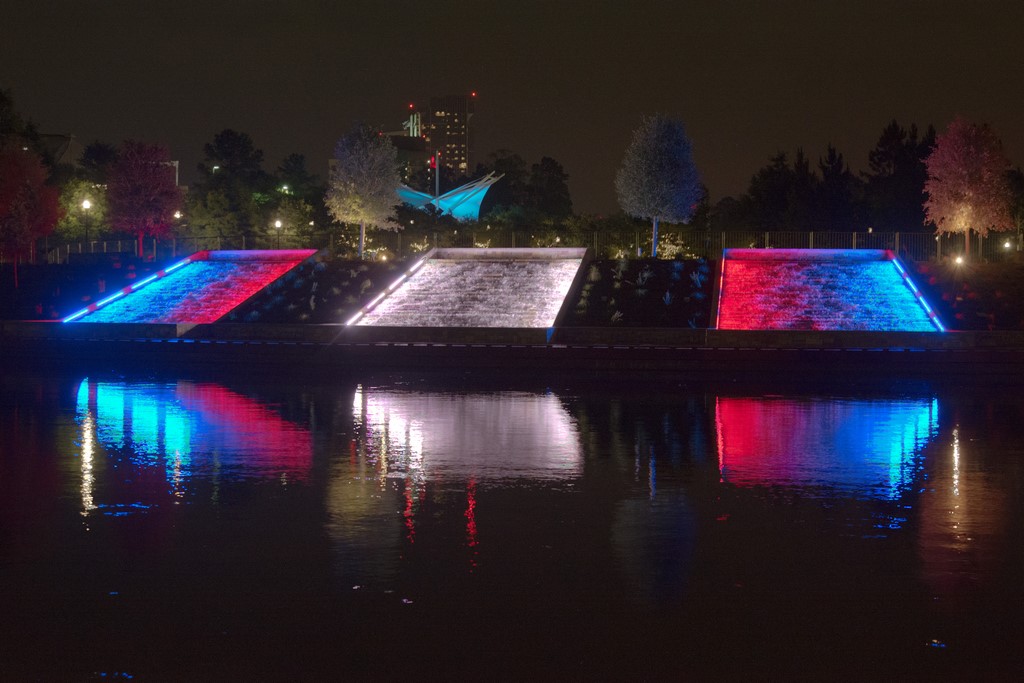 I left the site before long, satisfied with what we’d accomplished as a company and as members of the design team. In leaving the parking area, I passed over a bridge to the west of the cascades and looked down to see the light show, still in action. I thought to myself, this is amazing.

Projects like this become familiar to companies like ours as the years pass, with experience building on experience, but they never become routine: Each project brings its own excitement, its own distinctions, its own challenges and its own layers of satisfaction. For all that, however, the Turning Basin has become one of my all-time favorites: Taking what would typically be a fairly standard feature and using new technology to create a one-of-a-kind show feature? That’s extremely rewarding.

It all passed quickly – just six months from design to completion – but this is one I’ll hold onto as we add to our list of projects and accomplishments: Our whole project team took a step well outside the box, and now we at GPSI are ready for more!

To see a brief video of the cascades after dark, click here.

Jeff Chapman, P.E., has been principle at Greenscape Pump Services, Inc., in Carrolton, Texas, for more than 5 years and has been a civil engineer for more than 15 years. He received his B.S. in civil engineering from Texas Tech University in Lubbock and is a licensed professional engineer in multiple states as well as a member of the American Society of Civil Engineers. For more information, visit the firm’s web site: greenscapepump.com.