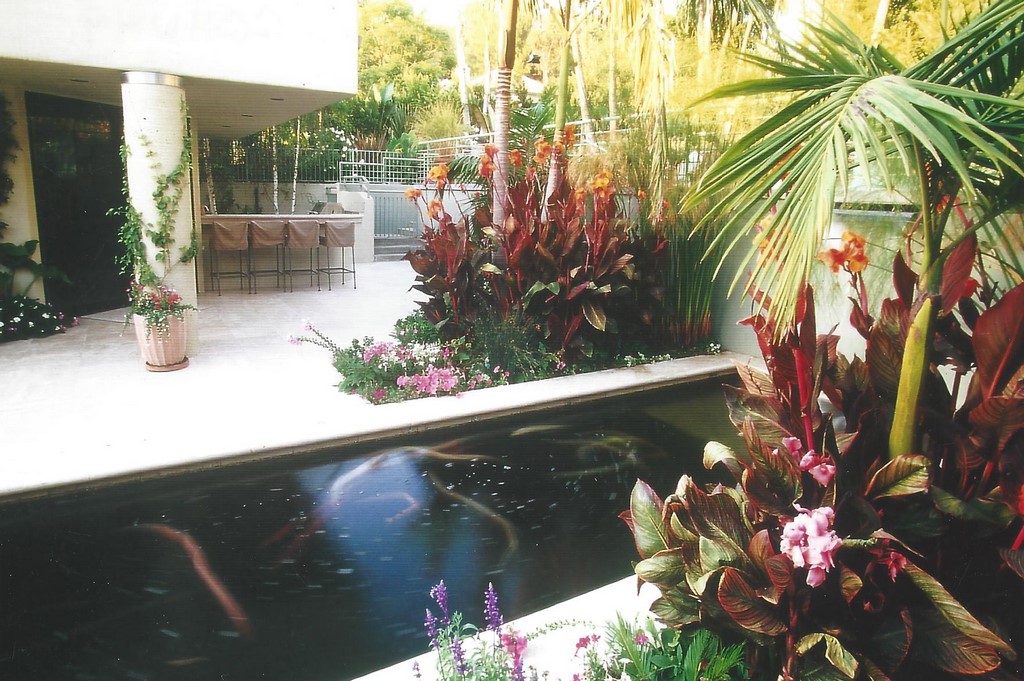 When we think about Koi ponds, the images that most often come to mind are of spaces entirely naturalistic: irregular shapes, edges offering limited direct access, lots of aquatic and terrestrial plants interacting at the margins and, as a rule, little suggestion of formality in the design.

That was certainly the case in a project I recently shared through WaterShapes (click here), and it’s generally been the case with other Koi ponds I’ve tackled through the years. But on this occasion, my clients lived in a distinctly linear, Modernist home, and the last thing they wanted in their large courtyard was a slice of wilderness. Instead, they wanted a Koi pond as formal as the house.

The result may be a bit wild conceptually, I’ll grant you, but it’s the perfect pond for the space – and I know for a fact that both the clients and their prized Koi are happy with it.

The property in question is in one of the great neighborhoods in the mountainous section of Beverly Hills, Calif. The home is a flash of white planes rising above the street and surrounds a mostly Travertine-paved courtyard. It’s really quite spectacular.

As part of the project, we revised the front yard, cutting what had been a big circular driveway more or less in two and giving the home a front-yard stage and a much more enticing entryway. We added the turf and the palm trees and, out front, began the process of softening the home’s harder edges. As mentioned above, the living spaces surround a large, mostly enclosed courtyard. At the back of this area, we added a simple, rectangular swimming pool on a level about five feet above the courtyard’s surface. There’s a nice view of the house from up there, and the platform serves as the origin of a wide waterfall that apparently flows from the pool down to the lower level.

That’s an illusion: The sheet of water is actually part of the circulation system for a large pond that serves as the visual core of the lower courtyard. The sheet fall is a valuable source of aeration while also serving to reflect the overall sense of slick modernity and providing a sound that fills the space with something other than reflected traffic noise.

Clearly, a courtyard paved entirely in stone and surrounded by a stone-and-glass building is an acoustically bright space with lots of possible echoes and reverberations. To ease back on that problematic potential, we installed an abundance of plants from palms to canna lilies as well as a large “green wall” to absorb sound and substantially reduce the echo-chamber effect. 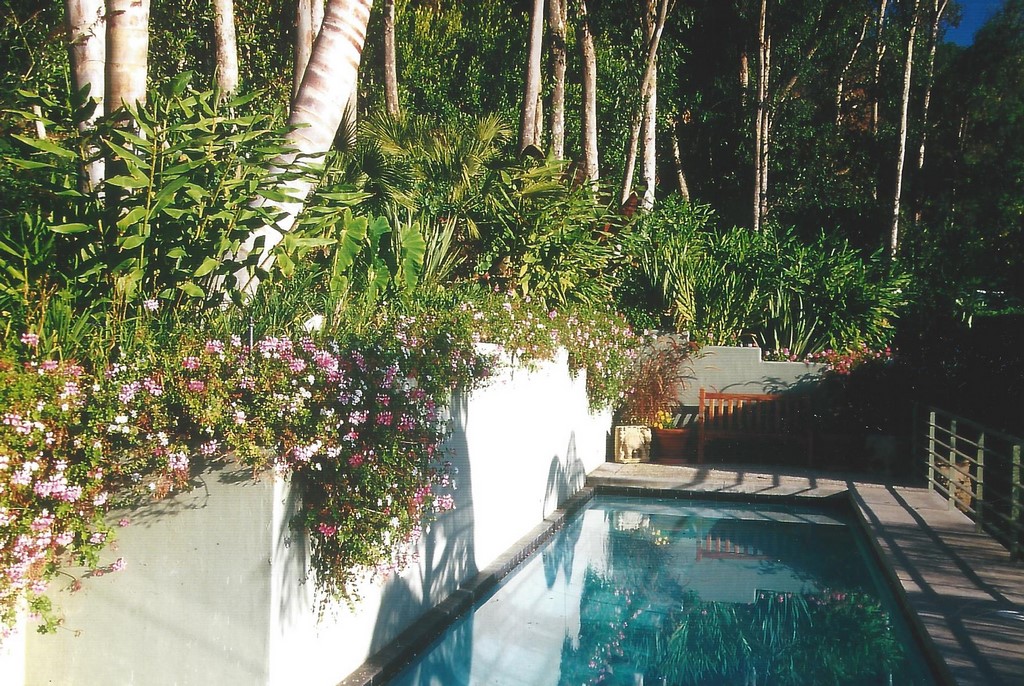 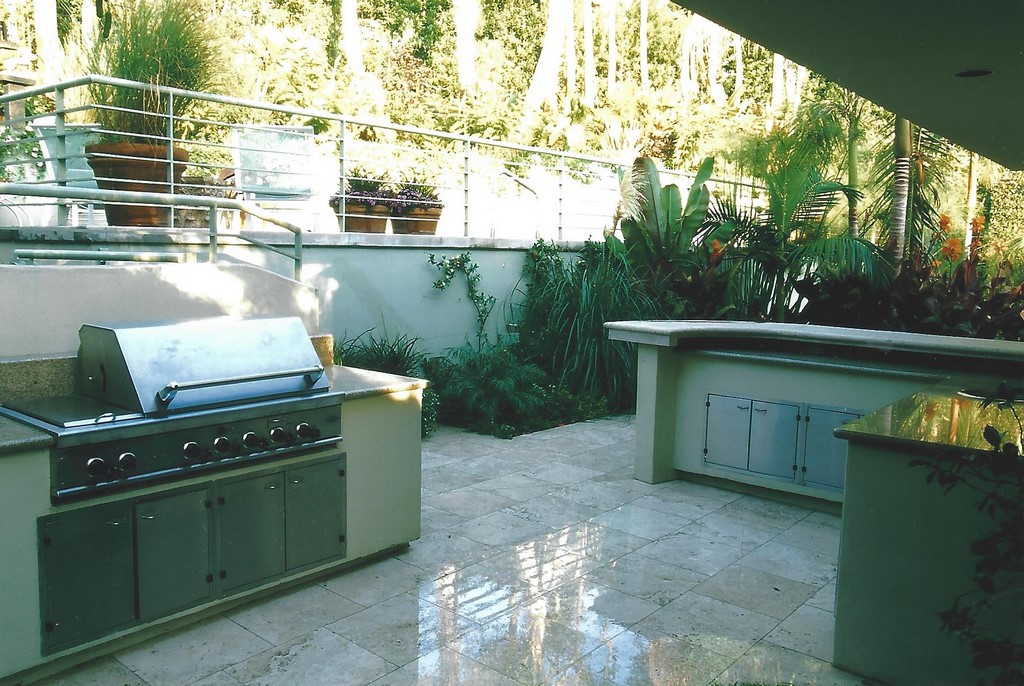 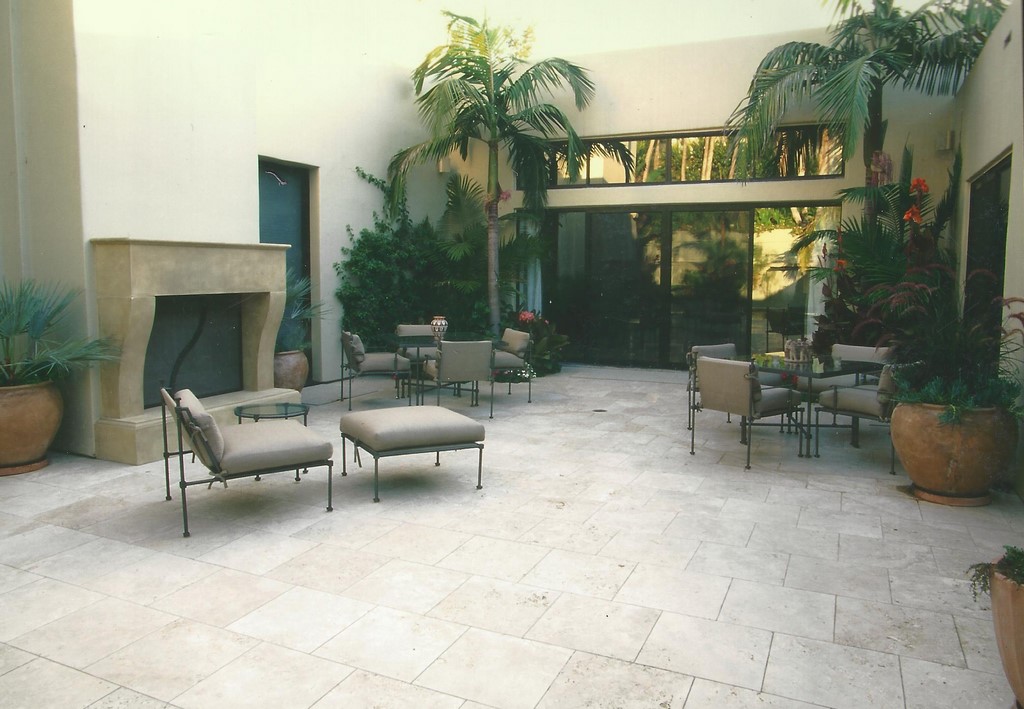 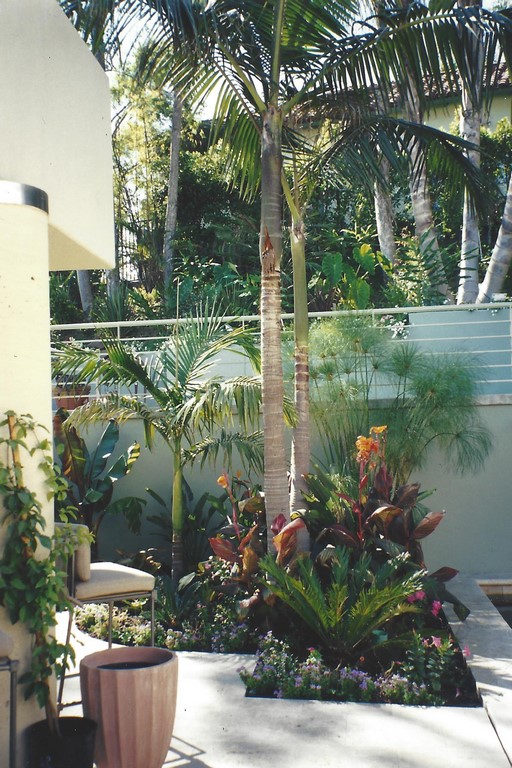 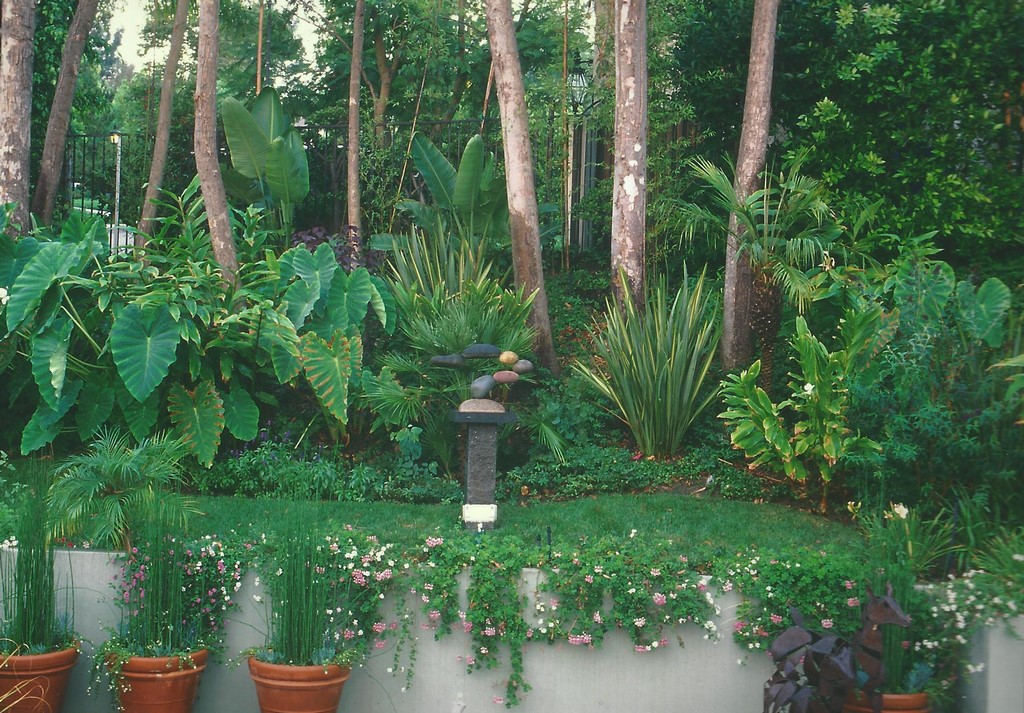 The courtyard seems compact in photographs, but at 65 by 30 feet, it’s actually quite large. There’s an outdoor kitchen in a sheltered alcove to one side, and there’s ample space for entertaining family and friends. In this setting, the presence of the pond is a visual highlight, but there’s also a key element of surprise: Few who approach the water would ever expect to see it filled with large, beautiful Koi.

In a sense, this is a Koi “anti-pond”: It’s wide open to approaches on three sides, making access easy for viewing but also quite direct for potential predators. More important, it violates common expectations about fish ponds by having such clean lines, flashy coping and architectural strength.

But we played strictly by the rules: At eight feet wide and more than 25 feet long, it has enough size for comfortable occupation by a good, healthy fish population. It also has the usual run of underwater amenities and configurations recommended by the Koi expert we consulted, including deep areas where the fish can avoid the heat of the sun as well as shelves and nooks and crannies where they can hide and feel safe.

As a designer, projects like this one in which I get to play with expectations and dish out a few surprises are always a nice change of pace – and offer the kind of challenges that keep me on my toes. 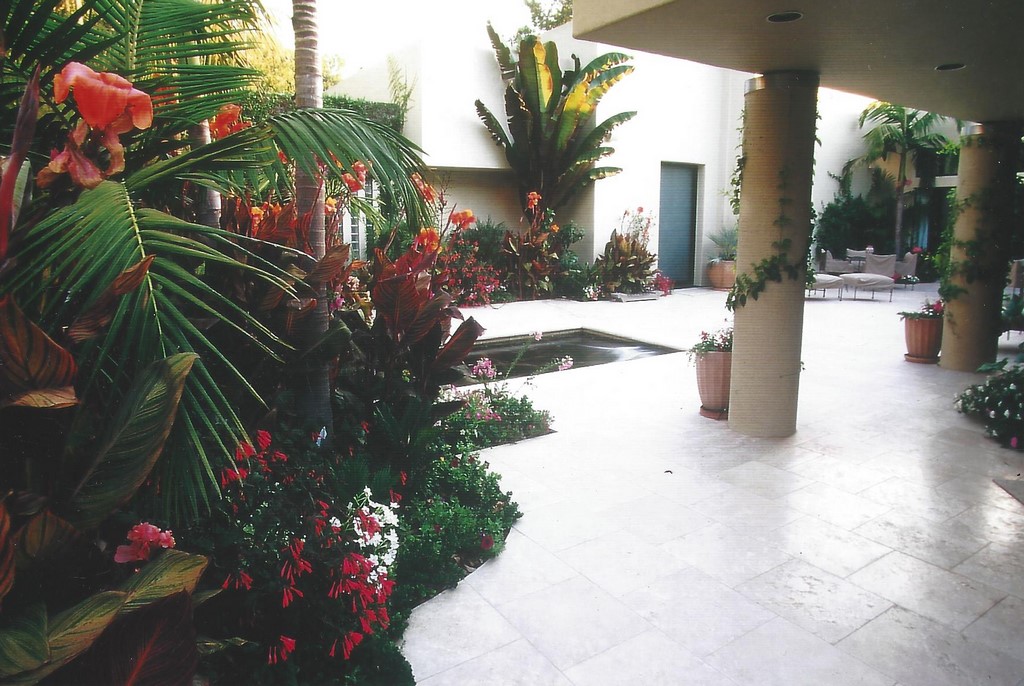 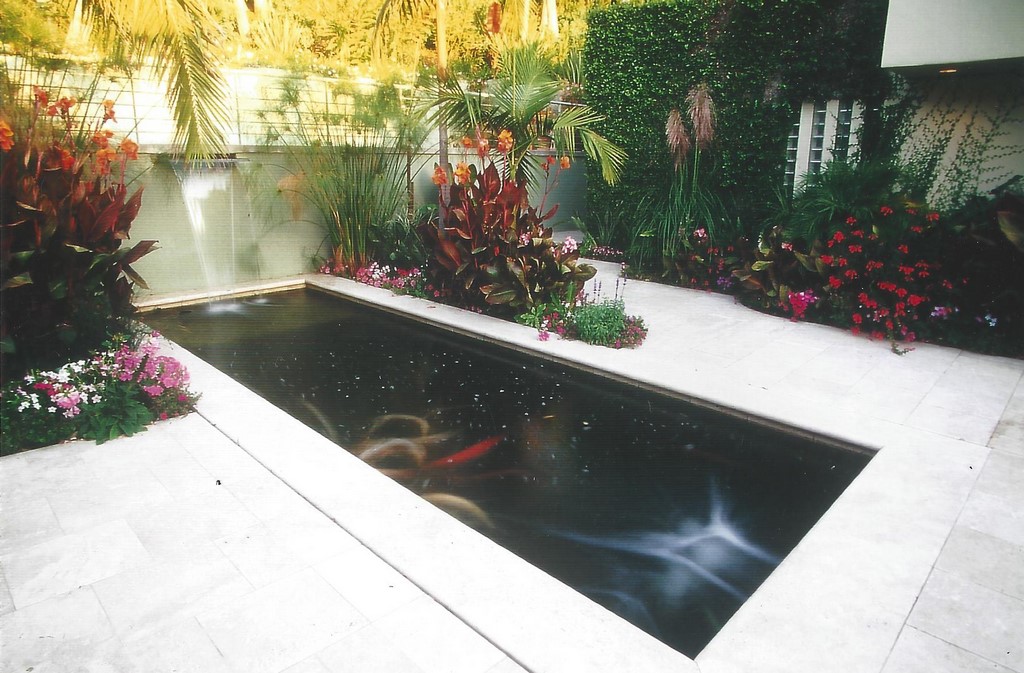 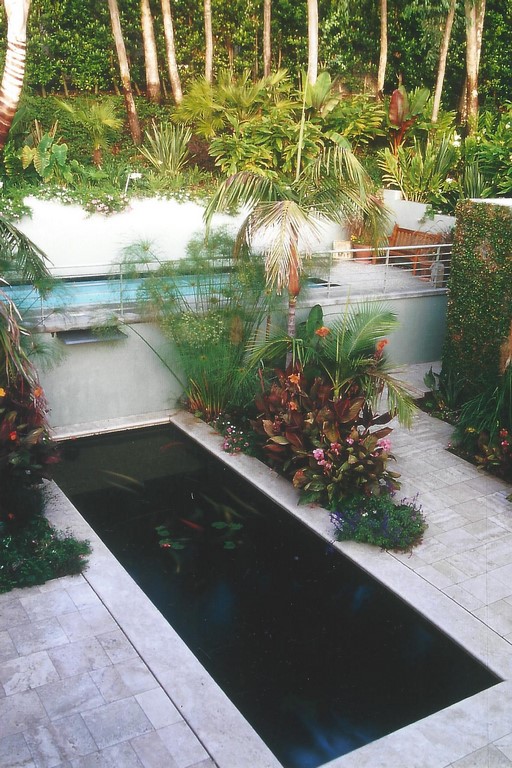 My usual plant-selection practice, for example, involves visiting a nursery with my clients and watching them to see what they like. If their preferences align with the design’s needs, favorite plants play prominent roles. But I don’t plan things out in advance: Once I’m on site with all of the plants at hand, I improvise and pay attention to instincts and design patterns I’ve been pursuing for more than 30 years.

But in this case, the formality of the design made me turn things around and select plants and materials that suited the property’s existing features and the style of the existing home. The clients were great and let me follow my own sense of what was needed, but I was constrained by the setting and saw a need to be thoughtful and deliberate in what we did – not quite my usual approach, but something easily managed.

Ultimately, it all worked out: The home is still vigorously Modernist, but we’ve softened its edges from the curb through to the back of the courtyard; we massaged its hard surfaces by using plants to muffle sounds and escape the echoes; and, most important of all, we brought water to the environment as a source of visual comfort, soothing sounds and the flashes of beautiful Koi swimming through the space.

In this context, the fact that the Koi are plentiful and thriving is icing on the cake: They’re a surprise that constantly intrigues, constantly inspires and constantly pleases – but only once you notice they’re there!

Colleen Holmes is president of New Leaf Landscape, a full-service landscape design/construction firm based in Agoura Hills, Calif. A professional with more than 35 years’ experience, she began her career as a child at the side of her father, Charles Prowse, who instilled in her a love of the art of landscape design. She studied landscape architecture at the College of the Desert in Palm Desert, Calif., where she was profoundly influenced by sculptor/landscape artist Michael Watling, and later attended UCLA’s school of landscape architecture. Her early work focused on designs for country clubs and gated communities in the Coachella Valley. Since then, Holmes has run her own pool and landscape maintenance firms and founded her first landscape design/construction company in 1980. She established her current firm in 1987. She may be reached through her web site: www.newleaflandscape.biz.