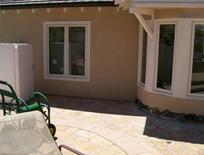 Over the years, many of the mistakes I’ve seen that result in the most severe consequences can be remedied by very simple fixes. Indeed, the simplest and best “fix” is to avoid making these mistakes in the first place. One example I’ve observed time and again has involved weep screeds.

The Scenario: This one begins with a simple explanation of what weep screeds are and why they’re used. When you have a home built on a concrete slab and the framing is bolted to that slab, the builder will put up some type of a waterproof material, usually tarpaper. On top of that, he or she will install a metal lath (wire mesh) over which stucco will be applied in three coats to achieve a thickness of seven-eighths of an inch.

We know that stucco is not waterproof. Water penetrates the stucco, hits the waterproof membrane (that is, the tarpaper) and then flows by gravity down to the bottom of the wall. At the bottom is a metal guide, the weep screed, which acts as both a guide for stucco application and, because it’s perforated, allows moisture to escape rather than accumulate at the base of the wall.

In one scenario I inspected, a swimming pool had been installed two inches above the level called out in the design. Thus, the decking was two inches higher and as a result covered the weep screed back at the house.

No one discovered this problem until three years later, when the homeowners were selling the house and an inspection revealed toxic mold in the wall along the side of the house where the pool deck came into contact with the house. Because the weep screed had been covered, water had accumulated and caused a severe mold problem. Remediation involved hiring a mold-removal company to come and pretty much tearing down an entire side of the house — at a cost of about $150,000.

As a side note, this is also why you want water to always flow away from the house by means of a slightly pitched deck. Water accumulating at the base of a wall will cause the same problem. Mold can be a severe issue, not only in terms of the cost of its removal, but also by making some people extremely ill. In the case of a person with asthma who is also allergic to mold, the effect can even be fatal.

The Fix: It really couldn’t be simpler in this case: Build the pool and the adjoining deck at the proper level. And if by chance you notice a deck covering a weep screed, know that it’s time to step back and rethink things. Also, be aware that when soils become saturated and decks heave, this is another way a weep screed can be blocked.

Lesson Learned: Keep in mind that weep screeds exist for an extremely important purpose. Covering them, whether it’s with decking or even soil in a flower bed, is a really bad idea. Suffice it to say, you should keep the weep screeds clear and otherwise be sure that water does not accumulate next to the bottom of the house.