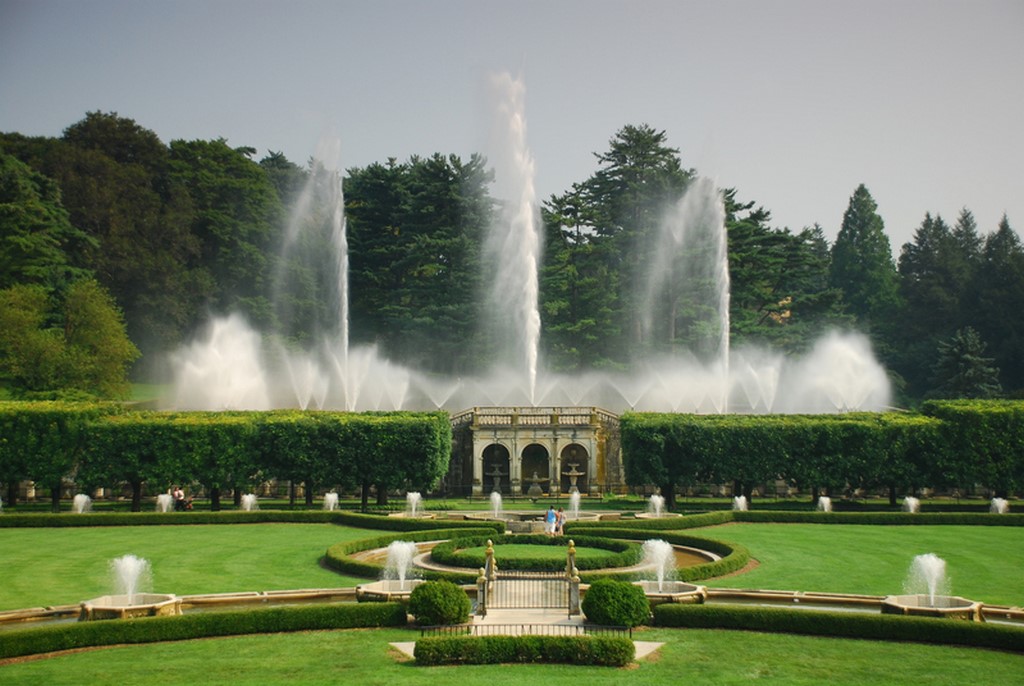 When the management at Longwood Gardens announced in late 2014 that the Main Fountain Garden would be taken offline and become the subject of a $90 million restoration project, anyone who has ever visited the gardens had to be happy.

I’ve been a regular visitor and huge fan of the Longwood for most of my life, and it’s been sad through the years to watch various systems break down and the overall performance of what was left gradually deteriorate. But don’t misunderstand me: Even in need of refurbishment, this fountain has always been inspiring – an experience you can’t come close to matching on the American side of the Atlantic.

When the staff started revealing the breadth and extent of what they had in mind, I was pleasantly floored by the level of their ambition: Not only are they restoring all of the various fountain systems to match the original intent of Pierre S. du Pont when he designed and organized the estate, but they are also bringing modern technology to bear and taking the overall effects to new levels of flexibility, reliability, serviceability and performance.

When the Main Fountain Garden resurfaces in the Spring of 2017, I intend to be there on the opening night to take in Longwood’s new fountain show.

As suggested above, it’s been sad to watch the old systems deteriorate. They may have been state of the art when first activated in 1931, but they were driven largely by a few big pumps, a generous level of head pressure and long runs of iron pipe. It was time for a change, and the Gardens’ team has been thinking big.

And it’s not just about the water components: The stonework of the fountains and surrounding structures is all being either restored or replaced. Limestone features, for example, are being taken apart stone by stone for cleaning and stabilization – a process that has involved labeling each piece so the huge jigsaw puzzle can eventually be put back together again. 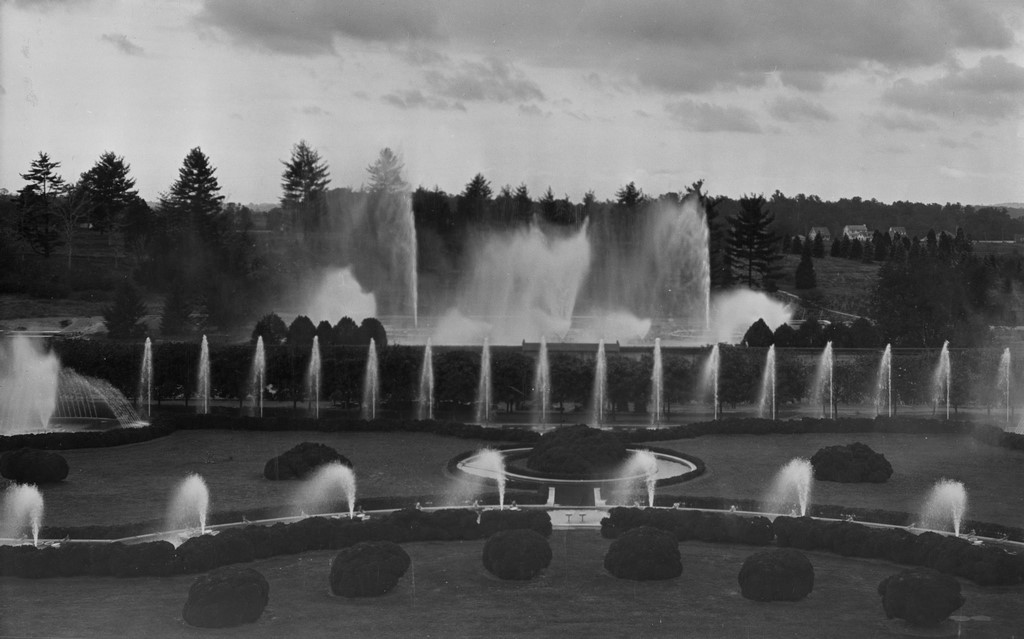 For me, however, the main event here is the replacement of the fountains’ electrical and plumbing infrastructure: When all of these systems and components are brought into the 21st Century, the fountains will run more efficiently – and that they’ll be able to stage displays for a much longer period during the year.

That’s great, because a longer season will make the show available to more visitors earlier in Spring and well into the Fall. The shows will be much enhanced by modern technology, with new water choreography, modern LED lighting arrays, more powerful jets that will send water up to 175 feet in the air (45 feet higher than formerly) and the kind of dramatic displays that will make Longwood’s Main Fountain Garden rival the best of the world’s great waterfeature systems.

And the improvements aren’t all on the grand scale. For example, the wall rising behind the main garden space, long inactive and run down in appearance, will be revitalized and its 20 wall fountains brought back into service after a 20-year absence. The landscaping will be revamped as well, with more plants, more horticultural display areas and more places to walk.

The project team tackling all of these tasks includes Beyer Blinder Belle (New York, N.Y.), an architecture firm that specializes in historic preservation; West 8, an urban design/landscape architecture company (also based in New York) that will guide development of fountain garden’s public spaces; and Fluidity Design Consultants, a Los Angeles-based waterfeature design/engineering firm, which has signed on to take care of the fountain systems and show lighting .

Not to be overlooked, architectural lighting in the area will be tasked to L’Observatoire International, a French firm with an office in New York; general engineering (civil, plumbing, mechanical and electrical) to Urban Engineers (Philadelphia); and construction management to Bancroft Construction Co. (Wilmington, Del.). 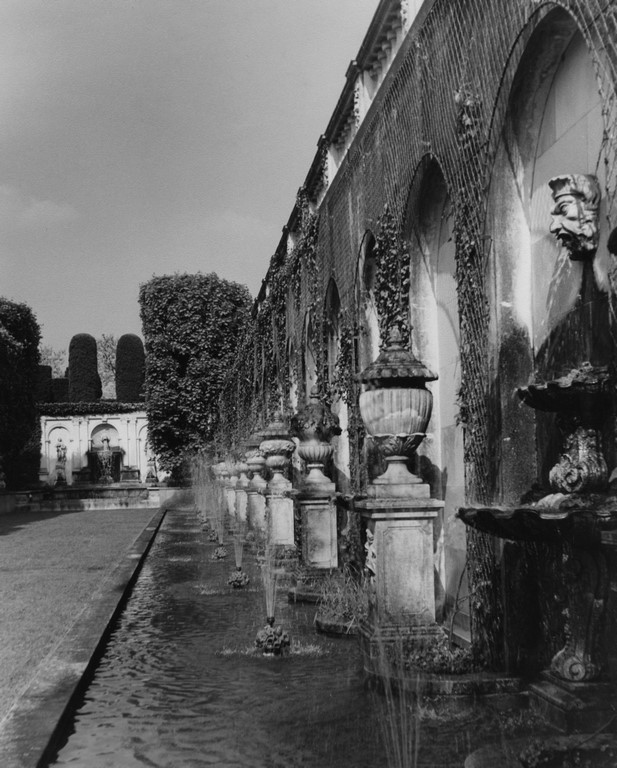 According to Longwood Gardens officials, many of the companies involved in supplying components for the project will be developing new products just for this fountain complex. Key players here include Crystal Fountains (Toronto, Ontario, Canada), which will supply fixed LED lighting systems and air-driven jets; Fountain People (San Marcos, Texas), which will provide various robotic nozzles, fittings and moveable lighting; Fountain Supply Co. of Santa Clarita, Calif., which will offer spinning jets (and also refurbish some of the fountain’s original nozzles); and Oase (Corona, Calif.), which is sharing its fire-injected jet system; and Synchronorm (Arnsburg, Germany), which will devise the fountain programming system for choreographing the water and musical displays.

The situation all of these businesses are finding themselves in is complicated beyond words. The original fountain systems were designed and built under the direction of Mr. du Pont, who apparently spent a good part of his childhood being amazed and fascinated by moving water.

Born in 1870, he attended the Centennial Exposition in Philadelphia in 1876 and was caught up in the fountains he saw there. In 1893, he traveled to Chicago for the Columbian Exposition and found even greater inspiration in its water displays. He built his fortune and kept circling the globe, captivated by the grand gardens of Europe and in particular by the water extravaganzas he saw at Villa d’Este. 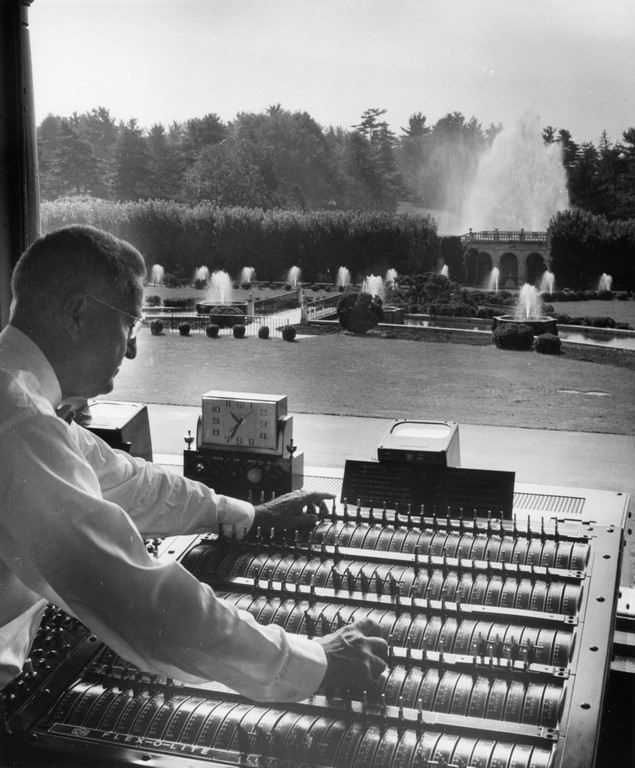 When he bought the property that is now Longwood Gardens, he was determined to apply what he’d learned about head pressure and fountain dynamics and began pursuing his own version of the Machine de Marly, the grand hydraulic system that delivers water from the River Seine to power the fountains in the Gardens of Versailles.

He had a huge advantage here: The chemical company he operated included countless experts in materials handling, systems development and process engineering, and he was able to bring them aboard to help turn his vision to reality. The staff would do the engineering, and he would observe their progress closely, sometimes even attending systems tests and, when he couldn’t, reviewing written reports on details including jet performance.

As completed, the estate includes a great many fountains, but the Main Fountain Garden was always at the heart of things – central to the property and the core of its visual splendor.

The Main Fountain Garden came online in 1931 and was as spectacular as du Pont had envisioned, but after more than 80 long years of service, it was becoming tired and was obviously in need of serious attention.

The plumbing was largely in decay, the stonework deteriorating and the performances falling short of the standards Mr. du Pont had set. A key turn in charting the renovation came in accepting the fact that, while everything should be restored to meet his original intentions, there also was room to take more than 80 years of technological advances under consideration and answer a simple question: If Pierre du Pont were around today, what would he do? 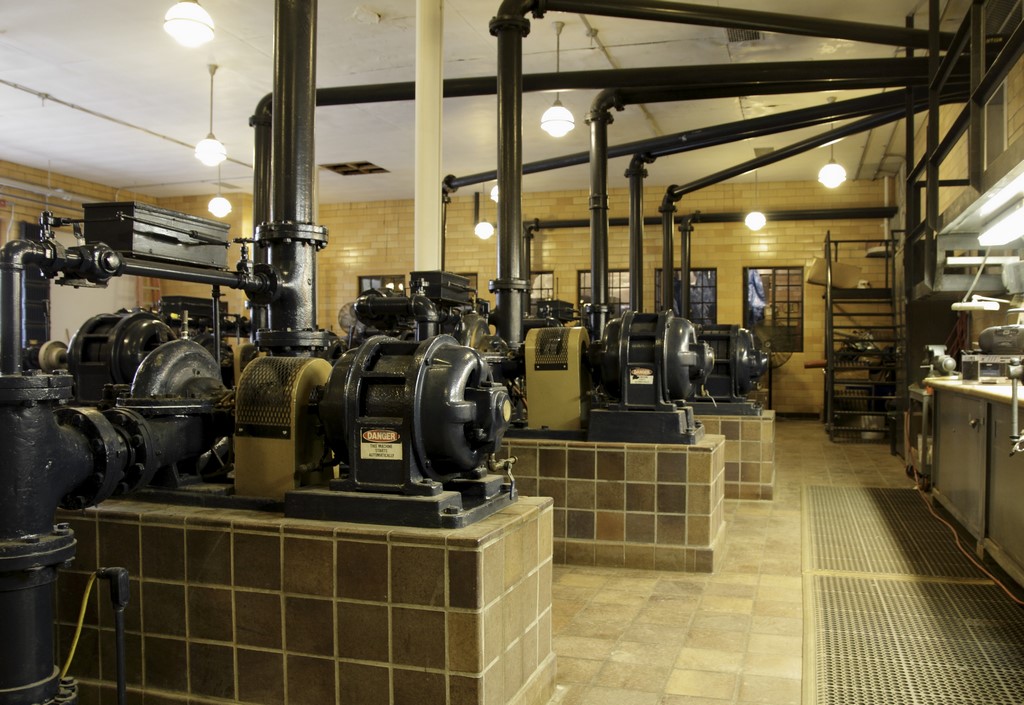 Everyone associated with his gardens knew the answer, so the decision was made to update the fountains in accordance with what he might have done were he alive today – whatever it took to align with his enthusiasm, impulses and ambitions.

Ultimately, the decision with the fountain works was made to go back to a clean slate: Everything is to be removed and replaced, the thought being that what is being done in the here and now is to be in service for the next 100 years. (There’s one sentimental exception: Some fountain nozzles are still in good shape and, as mentioned above, will be retooled by Fountain Supply Co. for use, where appropriate, in the new system.)

As for the totality of Longwood Gardens, the Main Fountain Garden is just the start: It’s the first step in a 40-year plan that calls for improvements throughout the estate. 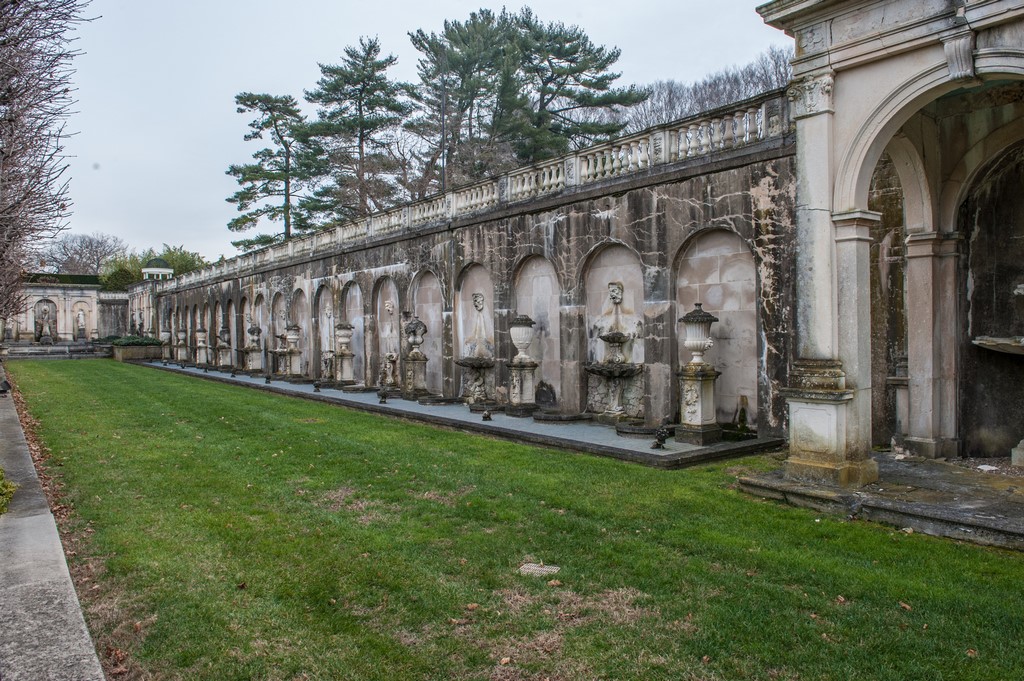 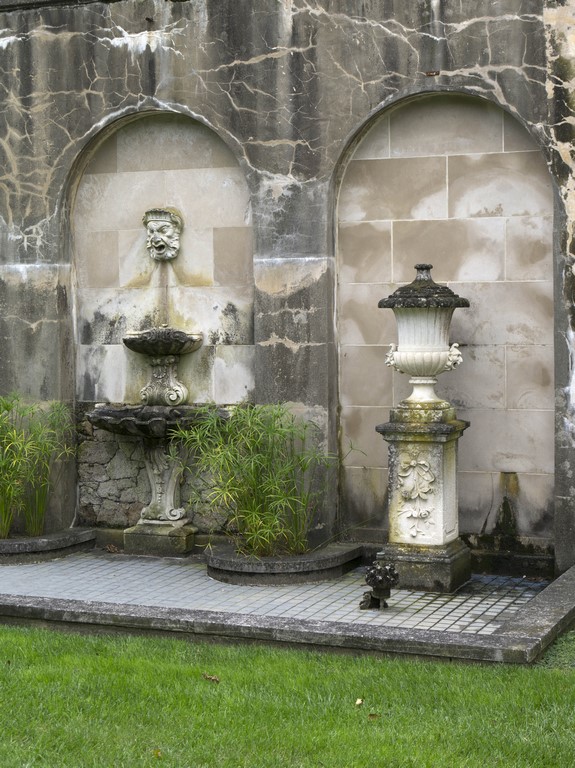 With the Main Fountain Garden, a two-year planning phase is now complete, with the two-year construction phase approaching the halfway point. And in a phenomenon familiar to most watershapers, of the $90 million and more that will be spent on this fountain complex alone, it’s projected that 80 percent of that expenditure will be buried underground – infrastructure, access and redundant systems that will never be seen by anyone once work is complete.

Through the coming months, I will be visiting the site periodically to share behind-the-scenes looks at the project as it unfolds. Next time, we’ll look at how everything is being taken apart – and at how the project team is managing to revamp things while showing respect for the past.