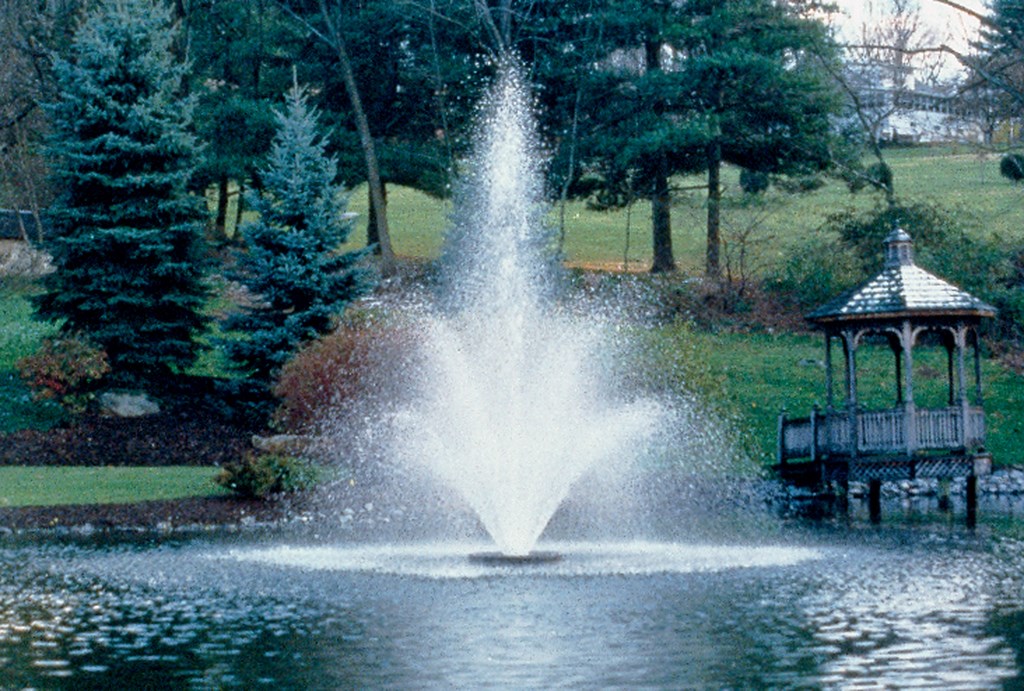 As the watershaping industry gets more involved with naturalistic bodies of water – particularly large ponds, lakes and streams intended to harbor life in the forms of aquatic plants and fish – it becomes increasingly worthwhile to understand the important role of proper aeration.

Aeration is a simple process involving the injection of dissolved oxygen (DO) into water. Nature aerates by way of things such as waterfalls and rain – activities we must imitate by mechanical means in our man-made settings if fish are to be healthy and a host of water-quality problems are to be avoided. This is why many man-made lakes and ponds have some form of mechanical aerator.

The issue becomes somewhat more complex, however, when you’re faced with selecting an aeration system for any given watershape: Every body of water is different, and developing a nearly individualized approach to each one’s oxygen demand is important in making an informed decision about the best form of aeration to apply. And when you add in the fact that many types of aerators also look like fountains – a big plus for designers and clients concerned with appearance as well as function – there’s an aesthetic component to consider as well.

Let’s start with the fundamentals and aeration in general before we get around to aerating with visual appeal in mind.

IN WITH THE GOOD

Aeration is all about oxygen, an elemental gas that is essential to sustaining nearly all forms of life and myriad natural processes, including the decomposition of organic matter.

Fish and other waterborne animals need adequate levels of oxygen to survive. DO promotes the oxidation of organic nutrients and displaces the water’s concentration of other gases, promoting the overall health of the aquatic environment.

This concept of dissolving a gas in a liquid is pretty simple in scientific terms, but it’s easier to grasp when illustrated by an analogy like this one: A hot can of soda will “pop” more when opened than will a cold one. This is because warmer fluids lose their ability to retain dissolved gases. When you apply this concept to a pond, lake or stream, you can understand why the need for aeration increases significantly in summer, when water temperatures rise.

When you add living organisms to the picture, things get even more complicated. All ponds have algae, for example, that will add oxygen during the day and subtract it at night. In other words, you’re working with a living system that changes hour to hour, so you have to avoid the trap of thinking of your lake or pond or stream in static terms. (The respiratory efforts of algae, by the way, explain why it’s a bad idea to shut aerators off overnight – just when the water needs oxygen most!)

As important as aeration is, it is not a magic bullet: Challenges arising from shallow depth, the presence of heavy plant and animal life or limited circulation can tax any system and make it very difficult for any type of aerator to maintain adequate DO levels.

In this sense, the role of oxygen in the overall health of the water’s living biosystem has profound implications for the construction process with respect to issues such as depth. The simple fact is that many man-made lakes and ponds are too shallow – probably an attempt on someone’s part to trim a few bucks off the excavation bill.

A too-shallow pond or lake is really a marsh in the making. Sunlight easily penetrates to the bottom, making plant growth a potentially explosive issue. This leads to stopgap measures such as the purchase of aquatic dyes that effectively make the pond “deeper” in terms of light penetration. It also starts water managers on circuits of chemical treatments that control growth – but produce dead organic material that must decompose and in so doing will further rob the water of dissolved oxygen.

To be sure, chemical manufacturers recommend treating the water in stages to avoid fish kill, but real-world situations often spiral out of control. It’s also true in the real world that aeration will reduce the need for these chemical applications and their associated risks and expense.

And if you happen to work in an area where the use of herbicides or dyes is restricted – particularly if your lake overflows into another body of water – achieving health through aeration may be your only option.

TO EACH ACCORDING TO NEED

The factors that have come up so far – size, depth, circulation, aquatic life – all place their demands on an aeration system. Depending on the application or the type of the body of water being considered, that demand can change dramatically in ways that dictate your choice of aerators.

On one end of the spectrum, the most demanding needs for aeration are found in the aquaculture industry, where fish are maintained in unnaturally high concentrations with correspondingly high DO demands. At the other, decorative ponds and streams demand much less from their aeration systems.

Paddlewheels, compressed-air units and aspirating injectors all have their niches in the aeration business, but none of them rank high on the beauty scale for residential applications. 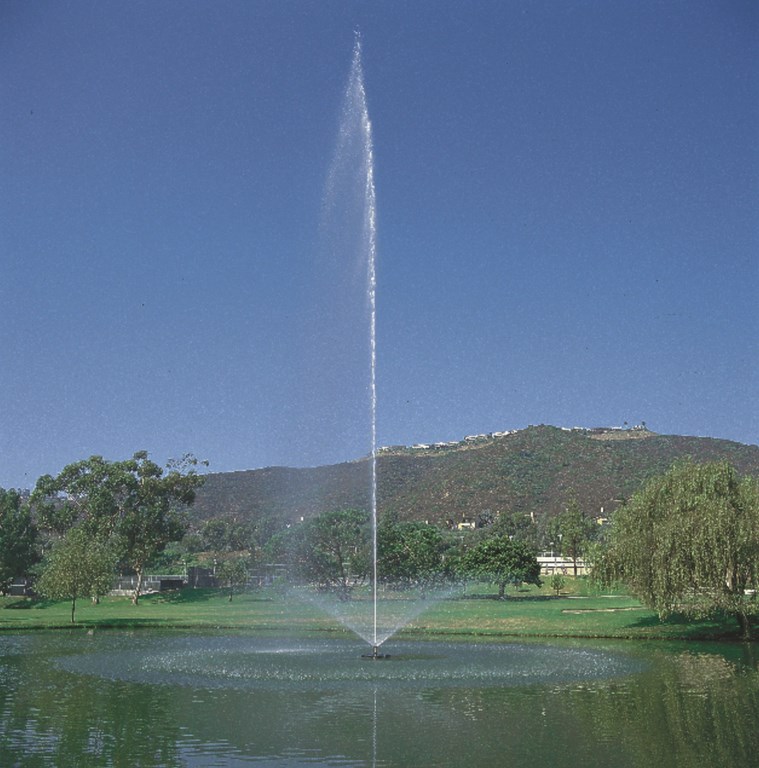 • Paddlewheels are bulky devices that create splashing/aerating effects similar to those generated by cascades and waterfalls. They are well regarded by the aquaculture industry for their efficiency at oxygen transfer, but they’re not intended for public use.

• Compressed-air units feature a shore-mounted compressor that must be mounted in an enclosure to reduce noise. Air is then distributed by a weighted air hose to air stones distributed across the lake’s bottom. If the water isn’t deep enough, there might not be enough rise time to enable the bubbles to dissipate before reaching the surface, which can cause an appearance issue and reduce performance. By contrast, very deep waters tax compressed-air systems by requiring more horsepower to overcome head pressure.

• Aspirating aerators use a pump to force water through a venturi that aspirates air into the flow. These devices are useful in applying aeration and circulation to problem spots, and do so without creating a visible spray pattern.

Many customers, however, want to see something dramatic in return for paying their utility bills, which is why floating-fountain aerators are becoming increasingly popular – a practical and aesthetic solution.

Floating units disperse water through the air, increasing droplet surface area and, consequently, dissolved oxygen content. Another benefit is increased circulation that distributes the DO where it will do some good. In fact, this circulation offers added value by breaking up layers of thermal stratification and reducing fish kills that can result from thermal inversions that hit ponds seasonally. Increased DO also will help aquatic microorganisms and the aerobic bacteria that decompose sludge.

Floating aerators are held in place either by shoreline ropes or by ropes tied to anchors or concrete blocks. Shoreline ropes can be used to pull the unit to shore for servicing, but most residential and almost all public installations use the anchor approach, which requires use of a boat for re-lamping of light fixtures or cleaning. (Safety is a must: Maintenance personnel should wear life vests, and electric-panel lock-outs should always be used when service is in progress.)

Motorized propeller units move more water per horsepower than do centrifugal pumps, producing a heavier pattern of droplets – but this occurs across a smaller area. 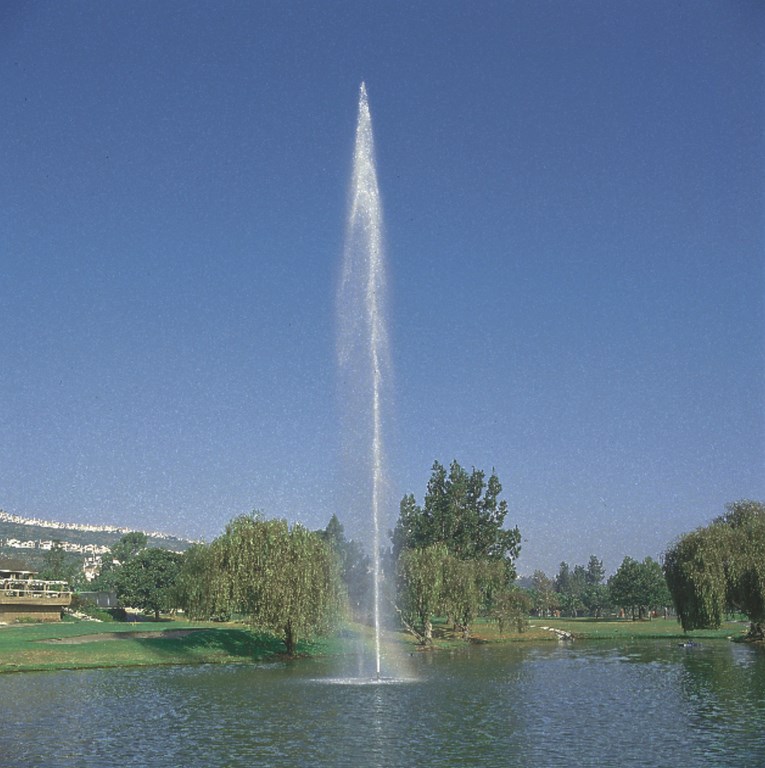 Depending on the unit, the manufacturer and the application, these devices also may raise noise issues, and older designs can be bothered by ice or debris. The push for UL certification has made finger-safe intake screens the norm, making cleaning requirements increasingly similar to those applied with fountains.

Fountains with centrifugal and mixed-flow pumps offer an extensive variety of water effects that cover wider areas – everything from the middle ground of flow and pressure up to high-pressure, multiple-stage turbine designs used to generate decorative patterns that reach heights of more than 30 feet. Here, it’s a matter of selecting the unit that gives your clients desired features and long-term flexibility.

With both these systems, appearance and circulation are tied together. A vertical plume is simple, classic and dramatic, for example, and achieves the greatest height the pump can deliver – but the water falls directly back to the pump intake, so the system has a lesser effect on overall circulation than would a system with a wider fan pattern.

But while a wide fan pattern may be better for circulation, the practical approach may not be the best one aesthetically if the lake or pond level is a few feet below the bank and the fan cannot easily be seen. For this reason, many designers turn to combination units that deliver center and horizontal sprays or arch patterns as a compromise. It’s also possible to get models with interchangeable nozzles to produce a variety of effects – allowing selection of seasonal configurations for maximum decorative or aerating effects.

As might be expected, these units range in size from quite small to quite massive. Ease of installation and maintenance is obviously influenced by product design, so you need to make sure at the outset that the body of water is deep enough and has sufficient shoreline slope to make the selected unit workable.

As for the working part of the system, the pumps are rated in horsepower – which doesn’t necessarily tell you what you need to know. Some in the trade use “one to two horsepower per acre” as a rule of thumb, but that doesn’t factor in either depth or shape. Often, for example, the best decision is to go with two smaller units at the end of an elongated lake rather than a big gun in the middle. (This two-fountain approach is also useful in providing redundancy when one unit is down for service.)

Many of these systems also come with accessories that may prove useful. If your clients opt for great height, for example, you should think about installing wind sensors and controls. Also, most products have separate cabling for pumps and lights. This feature makes for easier upgrades and repairs through the years.

The ultimate sin with respect to aeration is to ignore it altogether, but that’s rarely a problem because any level of experience with living watershapes usually cures professionals of the tendency to walk away from this fundamental need. [main text continues below the sidebar]

Despite general acceptance of the need for adequate aeration, however, the subject is not without debates of both the theoretical and scientific kind. Anyone who works with living bodies of water as a steady diet should spend some time at that higher level of discussion, but the important thing for most professionals is becoming familiar with the fundamentals of aquatic environments and appreciating the role of oxygen and all the processes it influences.

It can take time to sort through marketing claims and the bits of misinformation that can creep into competitive discussions, but for the most part, companies that have been successful at selling aerators have done so with products that work. In that context, the best way to ensure success in building and maintaining lakes, ponds and streams is to learn the critical questions and actively seek the best answers.

Erich Altvater is president of Atlantic Fountains of New Haven, Conn., and has worked for more than 20 years as a systems engineer in the design and construction of fountains and other waterfeatures. His firm specializes in the design and construction of watershapes for architectural settings (including musical and animated fountains) as well as in the installation of aerators and floating fountains for natural environments.