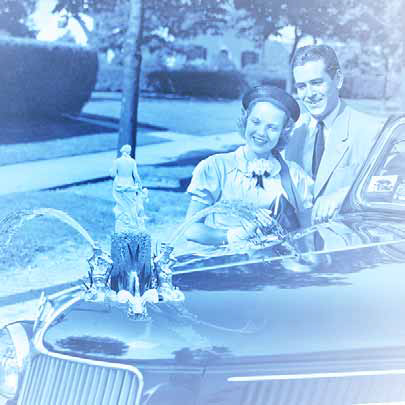 Is one person’s trash really another person’s treasure? That’s a concept we tested on a recent Surprise Gardener episode, where we ran into a strange backyard “centerpiece” and, as the designer with final say, I had to decide whether to cover the thing up or make it stand out.

The challenging objet d’art was an old truck chassis, abandoned and sunk into the yard many years before. Because of its location, it was something of a focal point. The homeowner had tried sticking an old whiskey barrel in the middle of the truck as a planter in hopes of “beautifying” it, but no such luck.

Once I surveyed the scene and gave the yard some thought, however, I knew we could have fun with the truck by turning it into a watershape.

The great part about this yard is that it’s a snapshot of California history. The chassis practically leans up against the original house built on the property in the early 1900s.

The house is no longer a residence, but the owners still use it for storage. As you can see in the “before” photos on this page and the next, it has a rustic charm. 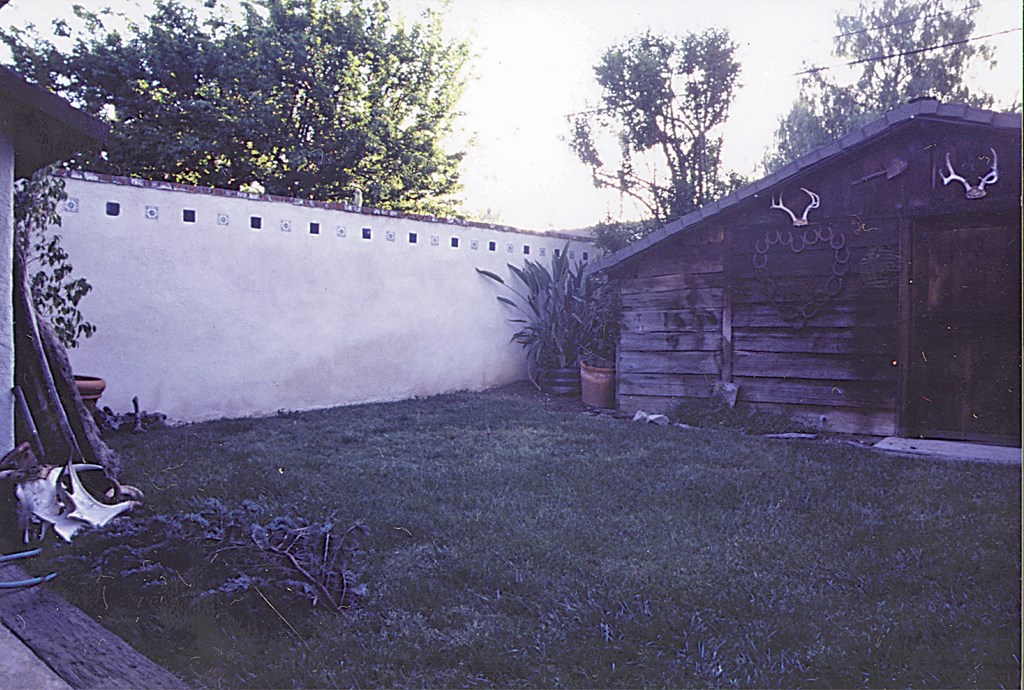 The property originally was surrounded by thousands of acres of citrus groves that blanketed the San Fernando Valley of Los Angeles until the 1950s. At that point, land values drew in the developers and drove out agriculture. Some of the citrus trees that were planted in the early 1900s still exist, and you can still spot a substantial grove here and there, but, unfortunately, most of the farms and organized groves have been pulled out to make way for far too many strip malls and housing tracts.

I offer this quick history lesson to set a stage: Upon seeing the original house and its weathered “accessory,” the last thing I wanted to do was cover up that chassis. I saw it as an opportunity to play off of the feeling created by this historic setting, rather than level everything and start fresh. 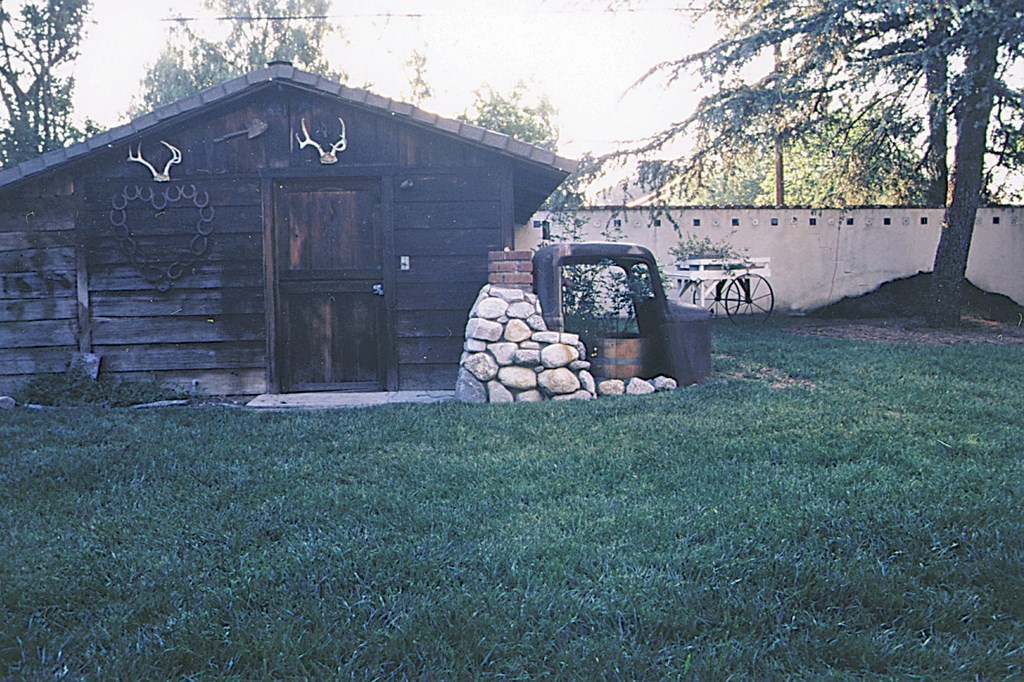 I also was lucky in this case that, as part of the Surprise Gardener show, I was able to design a yard without much input from the homeowner beyond an expression of general preferences, like “a cottage garden.” (Of course, it’s best if the homeowner is happily surprised at the end of the show. I’d much rather hear “Oh my, this is incredible,” rather than “What’s this?” – if you know what I mean.)

As I contemplated the overall design, I conjured a vision of what this truck might have looked like on an old farm road many years ago – sort of like The Grapes of Wrath, with hot, dry landscapes and trucks breaking down with overheated radiators – and I had my basic concept. Then I thought about where the water would go and conjured a little pond. (My vision was pre-antifreeze, so we’re not talking day-glo green.)

Now came the tough part: getting the crew excited about creating a watershape from an old truck whose radiator had overheated and sprung a leak that flows into a puddle-sized pond – and persuading them that it was not only “doable,” but that it could be done all in one day. (That’s our Surprise Gardener promise.)

It would definitely take ingenuity and some open minds.

The final design called for an irregular-shaped pond, playing off the idea of the leaky radiator leaving a puddle in front of the truck.

I marked off an irregular shape. The crew dug the entire pond down one foot and then dug about a third of it down an additional six inches to give us enough depth to vary water-plant sizes. (Generally, the larger the container, the more depth is required for the plant to sit at the correct level.) We later could make any necessary adjustments by placing some of the containers on bricks. 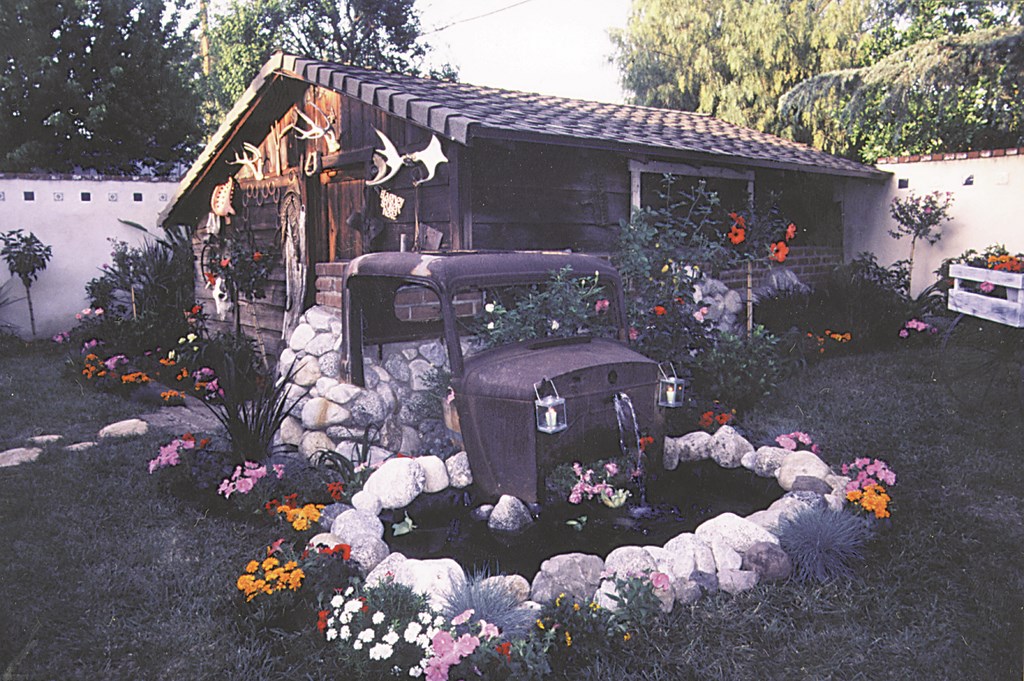 Next, we placed a PVC liner in the hole and filled it with water. We used river rock to hide the edge of the liner. This was appropriate, because river rock also had been used on a decorative wall in front of the house alongside the truck and helped to tie the new watershape in with existing elements – always an important design point.

After trimming the PVC liner, we planted around the perimeter of the pond, hiding any traces of the liner and softening up the edge and further helping to blend the pond and truck into the rest of the landscape.

Finally, we placed the pump in the pond and ran tubing up through the truck and out one of the existing holes in the front panel. Additional river rocks were used to hide the tubing at the base. We then attached a decorative nozzle on the end of the tubing; this not only created a nice stream of water, but also secured the tubing to the truck.

We found some decorative lanterns that made great headlights for the truck. In just a few hours and as you can see in the “after” picture (above), we turned what was basically an eyesore into a beautiful, fun and creative feature in a landscape that now had a story to tell.

It’s safe to say that most of the yards you’ll be working in probably won’t have an old truck chassis stuck in the ground, but I’ve told this story to make a point: You don’t have to start with bulldozers and a clean slate to make a design work. In fact, if you work with what you have and keep an open mind, you might be surprised yourself at the interesting watershapes you can create.

By the same token, if a yard has an old sculpture, arbor, architectural feature or some other prominent feature that, for some reason or other, the owner can’t bear to tear out, don’t start by thinking of ways to cover it up. Instead, spend some time thinking about ways to play off it and the themes it suggests.

As you go, remember it has been said that there is no original thought, only new ideas that play off existing ideas!