With any watershape renovation project, there’s a great deal of anticipation of what you’ll discover once the system is dismantled to whatever degree or level is necessary. In some cases, all is well and the process of reworking structures and systems unfolds smoothly. In others, however, there are surprises that can take your breath away.

This was one of those “other” cases – the restoration of an historic fountain that had been in place since 1958 as well as the upgrading of an adjacent space to accommodate a splash pad for interactive play and provide a stage for a variety of artistic performances, wet or dry.

The fountain had originally been built atop a key underground parking lot in Downtown Los Angeles near City Hall and various court buildings. We knew from old drawings that there were two slabs here – one as the top of the parking structure, the other for the then-new fountain and a surrounding deck area. But beyond that, there was relatively little to go on: We couldn’t tell, for instance, how thick the slabs actually were, nor did we get any clear information on the dimensions of the gap between them.

It was time for us to take a wild ride.

Our part of the project was a component in the creation of Grand Park, an ambitious undertaking between 2008 and 2012 that was funded by a developer who had asked local officials’ permission to build a residential tower on property adjacent to the park. To get his project done, they told him, he’d be required to put up a substantial amount to remake the space between City Hall and the Arthur J. Will Memorial Fountain – a span of about a quarter mile – as an engaging pedestrian space.

Among the many challenges he faced is that several jurisdictions and agencies had a stake in the project: Not only were both the City and County of Los Angeles involved, but the Los Angeles Music Center was responsible for security and maintenance in the area and brought a booming voice to the discussions.

And then there was the Great Recession of 2008-10: The developer provided funding for the park early on in accordance with his arrangement with the powers that be, but the start of a downturn in the housing market brought more than a temporary halt to creating the residential tower. In fact, it is still only “in the works” and has yet to reach even preliminary construction as of this writing.

Into the Grand Park mix stepped an A-list team of designers and contractors, including architects and designers from Rios Clementi Hale Studios (Los Angeles); the fountain designers at Fluidity Design Consultants (Los Angeles); general contractor Charles Pankow Builders (Pasadena, Calif.) and, for fountain construction, our team at Outside the Lines (Anaheim, Calif.). 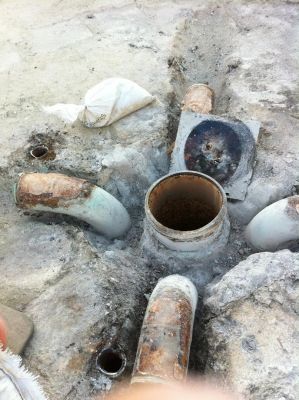 Another significant force on site from the very beginning consisted of those who were responsible for making certain that absolutely nothing we did in any way compromised the parking structure beneath the fountain plaza.

From Day One, the facility’s structural engineers made it known that we weren’t to touch their roof slab and had to make do – despite the extensive reworking of the old fountain and addition of a large splash pad – with the few existing penetrations reaching from fountain-deck level down to equipment rooms located mostly atop one another on the second and third levels of the parking structure.

This was problematic, as we projected running large pipes – up to 12 inches – down to the equipment room. They told us that was fine as long as we X-rayed surfaces to make certain nothing we did cut into any rebar. When they informed us that the rebar had been placed on six-inch centers, we saw that our task had suddenly become much more complicated.

Furthermore, we had to observe all clearance rules within the parking structure without making any new penetrations to existing beams. This seemed workable at first, but as we moved along it proved to be an impediment of substantial proportions – all in a day’s work for this project as it unfolded.

So there we were, powerless to change the basic working environment and approaching the renovation of an old fountain for which no accurate documentation existed and had to accommodate an extensive new system that would require a considerable amount of piping on its own. There were more than a few times when all of this made getting out of bed to face the new day a challenge all its own.

We were free to work with the upper/fountain deck as we pleased, so we started with a period of site assessment. What we learned here was that the roof slab for the parking garage sloped across our work area – from a few feet of gap space at the fountain base to a few inches near what was to be the outside edge of the splash pad.

Within the deck area was an old utility/ventilation shaft – a penetration of the garage roof that we could work with to accommodate much of the plumbing required for the splash pad. The aperture was by no means generous, and as we discovered soon thereafter, it was barely what we needed to move 23 four-inch drain lines from the splash pad to the surge tank.

We excavated the area around the old fountain, always mindful of the fact that we had to select equipment carefully to avoid overtaxing the roof slab just below us. In fact, this was a huge logistical issue, because every piece of equipment we brought on site had to be reviewed and approved by the construction office and garage personnel.

This was an ongoing struggle: Where, for example, we could have fit and would like to have brought in three concrete trucks at a time to speed the structural work that was going on above grade, we were told we could only bring them in one at a time. This offered us rippling scheduling challenges as we juggled multiple deliveries to the heart of a major metropolis notorious for awful commute times and traffic jams.

At the same time all of our splash-pad preparations were ongoing, we began working with the old fountain, then about 60 years old and in need of a full makeover of its plumbing systems as well as a complete upgrading of the fountain array and effects.

The large fountain bowl had to stay in place throughout all operations – a complicating factor but one that made sense given its weight and questions about whether a large-enough crane could safely be brought on site to lift and move it. So we cleared away all of the old pipes, conduits, fountain jets and lights and began restoration work with its surfaces.

There was an immediate hitch: Just beneath the surface, we encountered a red material and immediately knew work would come to a halt while experts stepped in to clear away a layer of lead wool that likely had been used as part of the fountain’s waterproofing system. The fountain bowl had to stay put, so abatement technicians built an airtight structure around it and went through a lengthy process of extracting the hazardous material.

It was at this point that we had to confront the thorniest of all the issues we’d face on site: Most fountain systems ran down a central shaft reaching from the center of the bowl to the equipment room. Directly beneath the end of that shaft was a huge support beam for the garage: We couldn’t go through it, we couldn’t exactly go around it, so as a result we had to rethink the entire strategy for making an enhanced fountain work via a narrow shaft that became even narrower as it moved down toward the equipment room.

There was more: As built in the late 1950s, the fountain was fed by a single large pipe that rose from the pump room to a four-armed manifold. There was no way we could keep using it: The metal pipe was in questionable condition, and we knew in any event that it couldn’t deliver all of the water at rates and pressures required by the new design.

But while we recognized that the old pipe would have to be removed, we had no clear idea of how we were going to get it out of there: It fit rather snugly in the service shaft, and to make the new system work, we needed to cut it flush at the base. 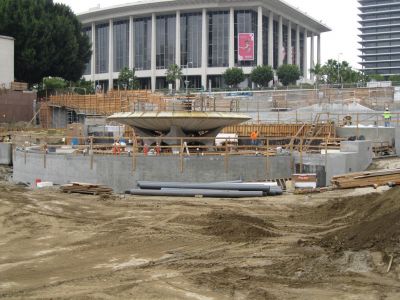 It was a head-scratcher of magnificent proportions, and we ran through every sort of conventional and non-conventional approach that any of us could conjure. The best option we had was to remove it in shallow sections, piece by piece, but this would’ve involved suspending an expert technician upside-down into a deepening hole with a blowtorch.

A quick turn of thought to what CalOSHA would think about such a plan made us keep looking, and at last we came across an oilfield-rigging service that used water jets to cut sections of steel pipe in wells. It was just the answer we were looking for, and in relatively short order the fountain shaft was clear and we began to understand that the challenges would keep on coming.

The shaft, we discovered, tapered inward as it descended, so the space we thought we had to work with was somewhat more constrained than we’d been figuring. Playing with our plans, our best option now was to run a pair of smaller lines down the shaft, figuring we could do so without losing the head pressure we needed to replicate to old fountain’s familiar performance while offering some extra gusto for new ideas floated by the folks at Fluidity.

It was this necessity of constantly aligning our work with the vision and desires of the design team and the stakeholders that kept us going for the duration of the project.

Next time, we’ll look at the solutions we developed and, finally, take a look at the most prominent features in Los Angeles’s most distinctive park.