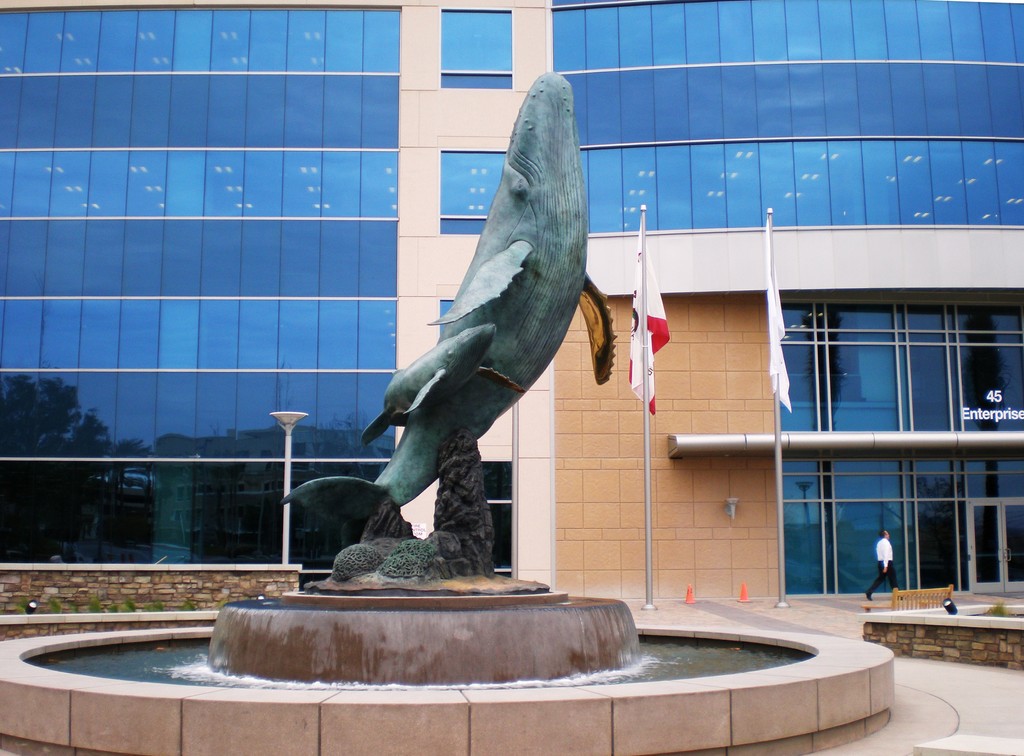 As watershape design expands beyond the mostly recreational traditions of the recent past, more of us are being asked these days to design water elements that work more decoratively and serve to frame, reflect and otherwiseaccentuate or accompany art pieces.

In these situations, a pool, fountain or basin design is visually driven by the artwork, and whether the project is done for a private residence or a commercial complex, the results can be wonderfully dynamic. In most cases, requests for this design approach come from an owner who has a particular piece in mind; in a few other cases, the artist will commission a watershape to accompany a main attraction of his or her devising and becomes a key participant in the design process.

All in all, I see this as another manifestation of a trend in which increasingly ambitious clients seek to make highly personal statements about their tastes by seizing control of their exterior environments. Often, this desire is driven by travels in which they’ve seen artworks displayed in a similar fashion and want to recreate such settings for themselves; sometimes it’s an entirely individualized impulse to do something special.

Whatever the source of these art-driven adventures, I’ve found the work to be stimulating, challenging and always highly customized: No two situations are ever exactly alike; stylistic flexibility is mandatory; and none of these clients is interested in anything that seems like an off-the-shelf approach.

What I’m discussing here isn’t a matter of a client’s going through a catalog and selecting a bronze of a little boy fishing or skipping stones across the water. I would classify that sort of art as an accent piece – a complement to a setting rather than its focus. To be sure, I’m running into more clients who also want these sorts of pieces, but the discussion here will focus on incorporating sophisticated, one-of-a-kind artworks into exterior spaces.

In these upper-tier situations, my experience has been that incorporation of the art and sometimes even the creation of the artwork itself is part and parcel of the watershape-design process.

What this means is that, as watershapers, we must be prepared to engage the original artists in a type of dialogue that is very different from discussions we’re accustomed to having with other contractors, architects and landscape architects. Most are demanding, many are distinctly eccentric – and in almost every case they are deeply vested in the manner in which their art is to be displayed.

For my part, I’ve chosen to welcome them as invaluable members of the design team and have often been pleased to find that they come to the process with terrific ideas and fresh perspectives.

That degree of openness to outside input is not to every watershaper’s taste, I know, and I’ve spoken with some who are impatient with this sort of process or are even intimidated by it to some degree. Personally, I find a good deal of enjoyment in pursuing this type of high-minded aesthetic dialogue, basically because you can’t predict where it will lead you. Indeed, I know in my own work that this interactive process with artists has led me into work with details, configurations and materials I know would not have conjured or encountered in the ordinary run of business.

There are times, of course, when there’s no artist involved – as with imported pieces or antiquities, for example. But even in those situations, the same desire to integrate art and water is a driving force, and the experiences I’ve had in working directly with artists has given me an edge when it comes to speaking an aesthetic language that would otherwise be beyond me.

With many of these projects now under my belt, what I find so exciting is that simply by engaging in these conversations, I become part of the process of artistic creation and help determine how the setting, the reflective qualities of water and the materials used to encompass the piece will influence how a work of art will be seen and perceived by others. That’s pretty cool, I’d say.

To bring what this is all about into practical focus, let’s take a look at a few projects that exemplify what I’ve been experiencing.

One of the first times I was asked by an artist to build the perfect environment for a creative piece was in 2004, when I received a call from Lita Albuquerque, a Santa Monica, Calif.-based sculptor and environmental artist. She’d been commissioned by the Fish Interfaith Center at Chapman University (Orange, Calif.) to create a piece that was to be installed in a new chapel and would reflect the center’s focus on unity between all religious faiths. 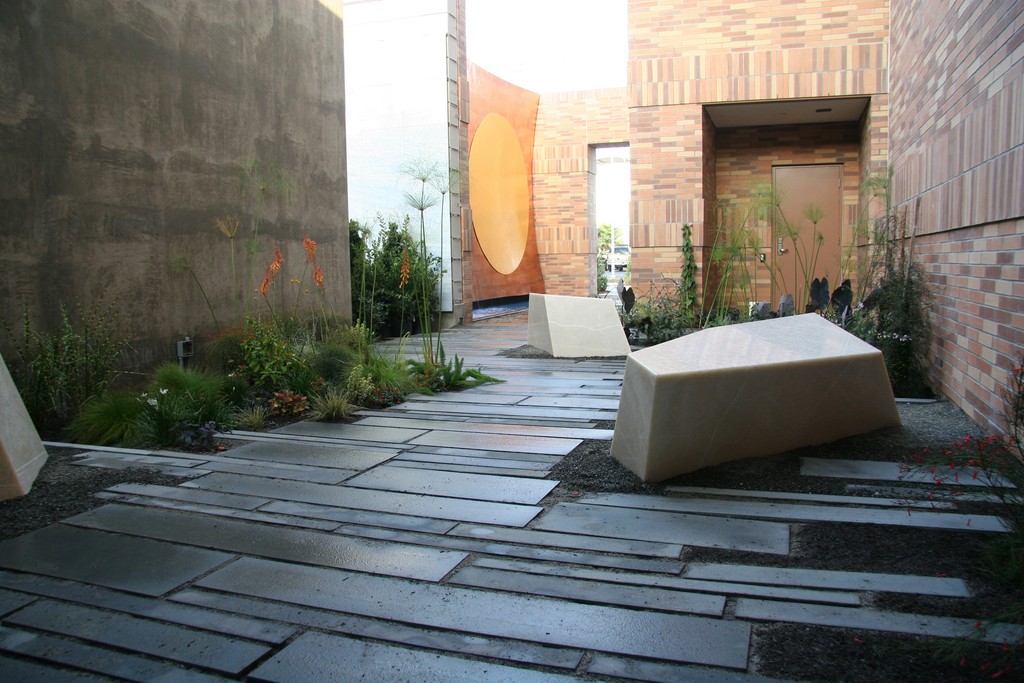 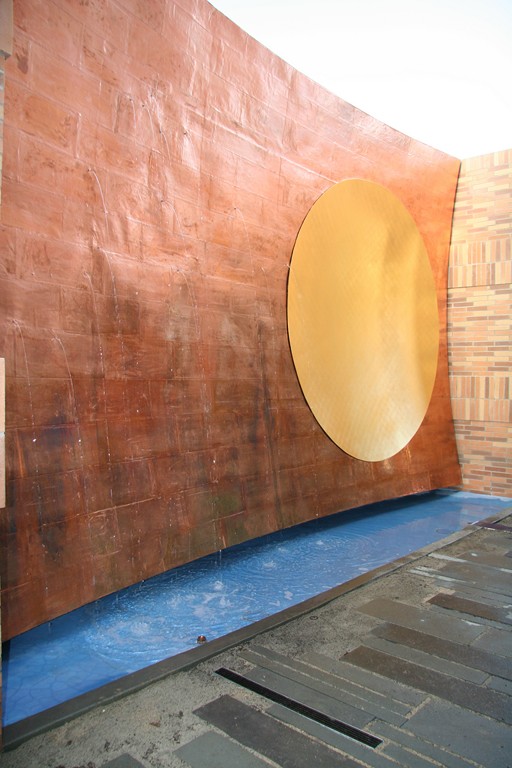 With that high-minded mission in mind, she created a wonderfully evocative piece called “Solar Star Score” – a nine-foot-diameter golden sphere mounted on a long, bright-orange wall. Water flows gently behind the sphere, making it shimmer and glow when lights hit it. As the artist puts it, her solar fountain envelops the viewer with its sheer size and golden light.

The waterwall we were asked to devise was to be the climax to the journey she intended viewers to take in walking over a blue-glass channel and down the hall to a large square lined by etched quotes from a variety of sacred texts. In entering the space, they encounter the sphere.

To evoke the emotional response the Solar Star Score was designed to inspire, all elements of the watershape had to be exact in size and placement: The globe, for example, had to be affixed to the waterwall at just the right angle needed to catch the light and seem to glow. It also had to be just the right height to appear to be floating at just the right moment at the end of the observer’s walk.

There was no margin for error when it came to realizing this artist’s vision, and the result is a slice of Elysian bliss.

Some years ago, I received a call from a client who’d commissioned a steel sculpture from artist Guy Dill of Venice, Calif. The client said he wanted the piece to be seen from his house at a very precise point that would be on center with the home’s entry and that a pool and spa were to be designed around that focus.

The result will be familiar to many readers: It was the subject of a feature by Stephanie Rose in the November 2005 issue of WaterShapes: We collaborated with her on a perimeter-overflow design that provides a wonderful reflective surface for Dill’s abstract composition. 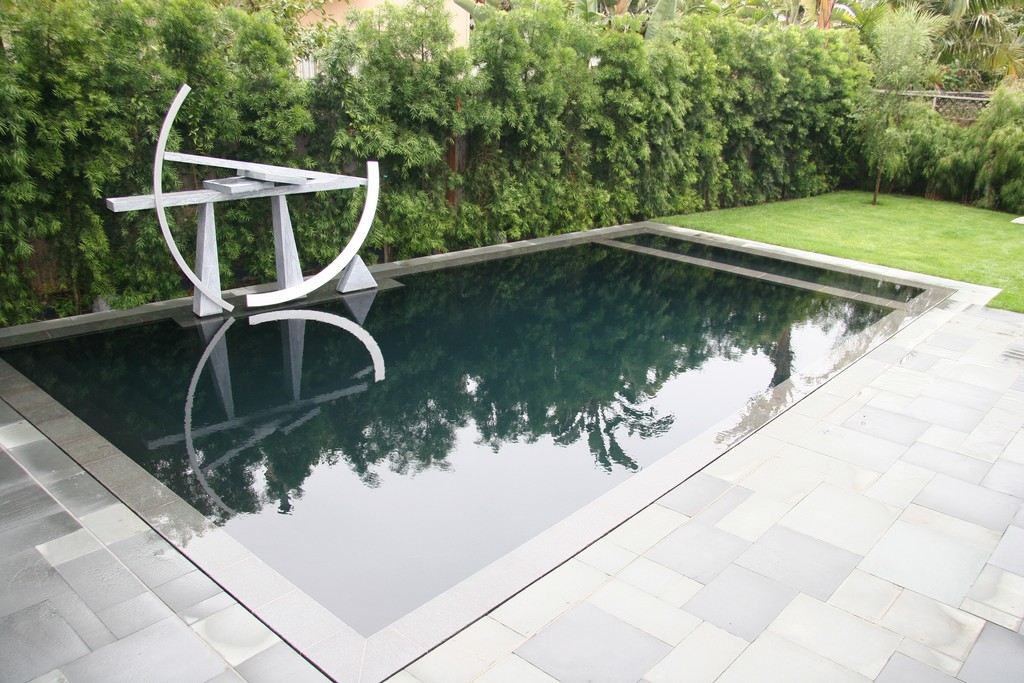 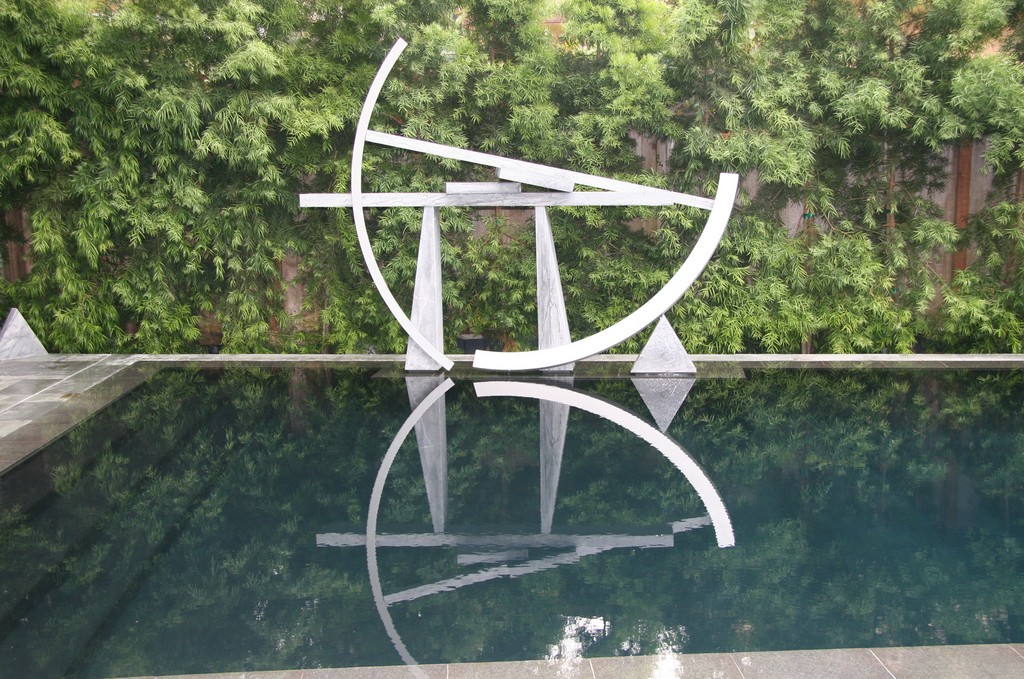 I devised a pedestal that was to reach inside the shell in such a way that reflections were maximized while also making the large sculpture seem to float on the water. Dill was continuously involved right through construction process, providing us with templates for the sculpture’s base and keeping us apprised of the piece’s weight as we engineered the pedestal and bond beam.

Once the pool was finished and the sculpture was craned into place, we all reveled in the beauty of the effect: The steel piece is the dominant visual feature it was intended to be – and the reflection on the water effectively doubles its size.

This project was built right on the sand in Newport Beach, Calif. The owner had purchased adjacent homes and wanted to place a pool between them in such a way that it would help in making a bold artistic statement on the wall of what was to become the guest house that would be visible from the balcony of the main house.

The piece here was the creation of the homeowner, an avid art collector who pulled in a number of craftspeople to bring his concept to fruition. Called “The Warhol Wall” and dedicated to the work and memory of one of the client’s favorite artists, the composition features a number of colorful spheres. 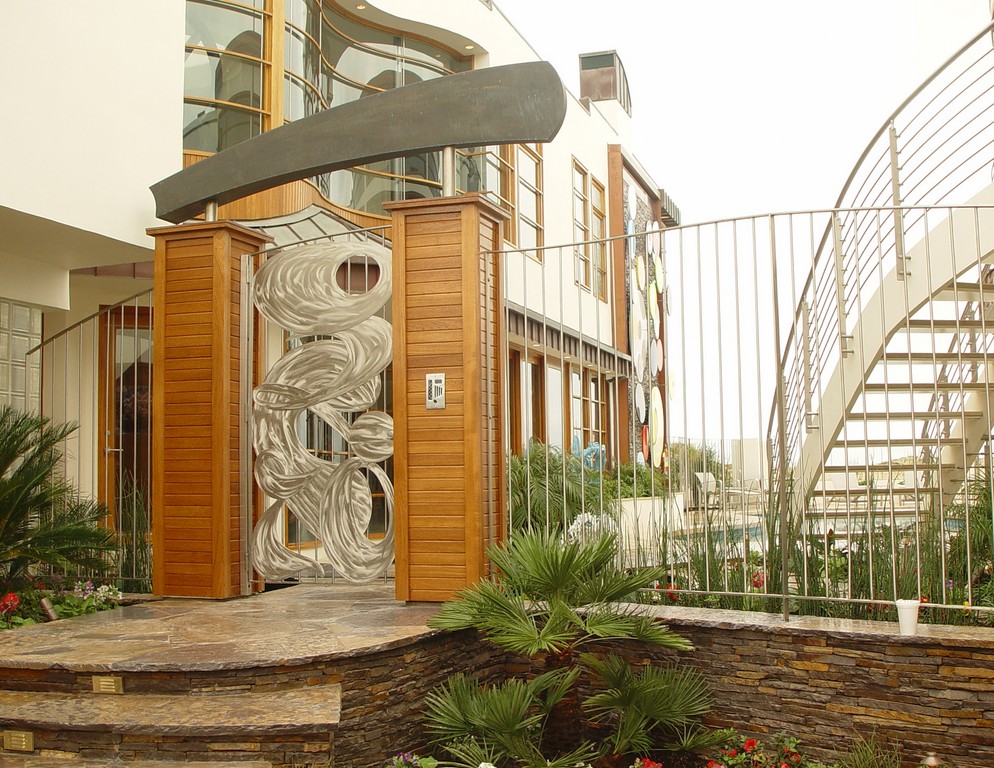 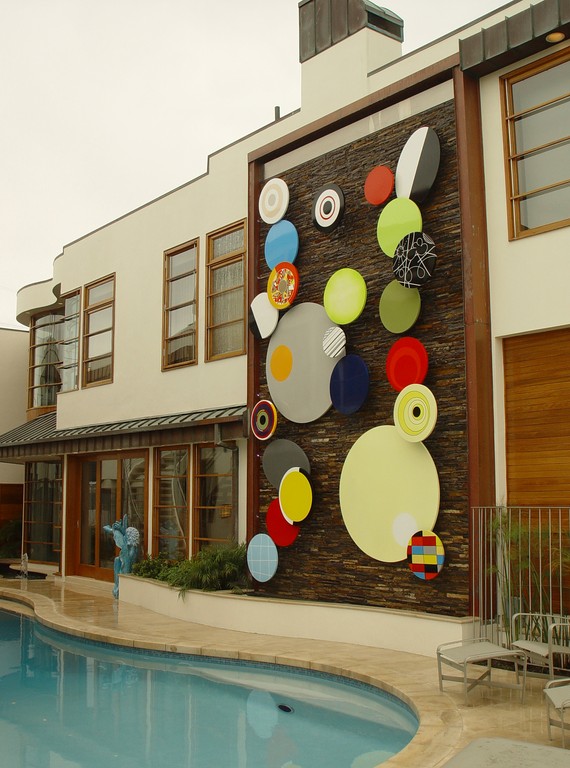 Working as a grand team, we all collaborated in developing a design that included spheres of varying sizes, all painted in different colors and patterns and meant to be suspended off a large, sheeting waterwall made with stacked Bouquet Canyon stone.

Beyond that main focus, the project also included a number of other works of art arrayed playfully around the site. There’s a sculpture of a foot beside the spa, for example, and a beautiful tile mosaic of a beach scene that backs up a covered patio area. The property also has a swirling bronze-and-steel entry gate that’s one of the most distinctive in a neighborhood renowned for dramatic architectural statements.

I recently finished a fountain that features a massive bronze whale and calf for the entrance area of the Newport Beach, Calif., headquarters of Pacific Life Insurance Co. The owners had commissioned the piece from artist Randy Puckett of Salinas, Calif., who has gained acclaim for his portrayals of these mammals. 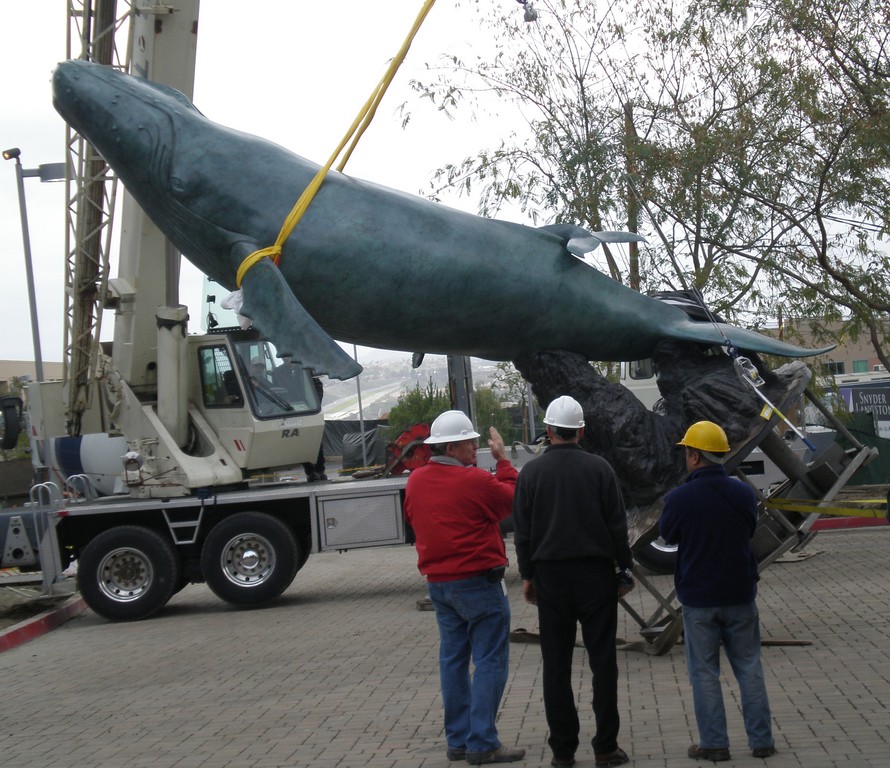 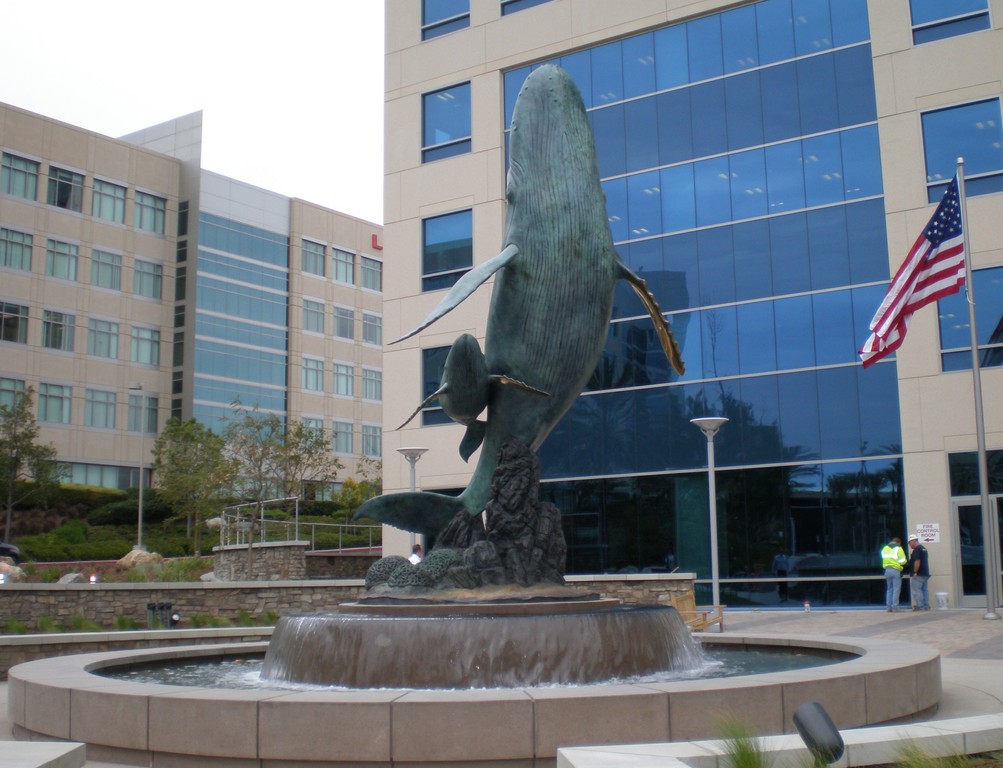 In this instance, I was brought into the project not by the artist or the owner, but instead by the office building’s general contractor, Snyder Langston. The 30-foot-tall whale and calf were being created in the artist’s studio several hundred miles to the north of the headquarters site, which required both close coordination and numerous trips to Salinas to make certain templates were correct and that the sculpture’s base would fit the fountain.

Interestingly, this piece was such a labor of love for Pacific Life’s CEO that he was often the one who traveled to Salinas to observe the artist’s progress and take the critical measurements. For us, the principal challenge was hiding the fountain works, to which end we buried a large, pre-cast equipment vault next to the fountain base in accordance with strict local codes for venting and flood prevention.

When the sculpture finally arrived (30 days ahead of schedule, but fortunately we were ready), we all watched for six hours as the whales, often swaying in mid-air, were moved into place. When the water came on shortly thereafter, she and her calf were fully in their element, playing in their own small ocean.

Randy Beard operates Pure Water Pools, a construction/service firm based in Costa Mesa, Calif. He was working in the entertainment industry when he started a pool service business as a sideline. Before long, he and his partner (wife Martha Beard) expanded their base by purchasing Pure Water Pools from another technician. As the route grew, they dropped their other jobs and focused entirely on the pool business as small repairs led to big repairs, big repairs to remodels, and remodels to new construction. Each year, the projects became more creative and technically challenging. Today, the firm works with many of the area’s leading architects and landscape architects to create a range of custom watershapes for upscale commercial and residential clients.