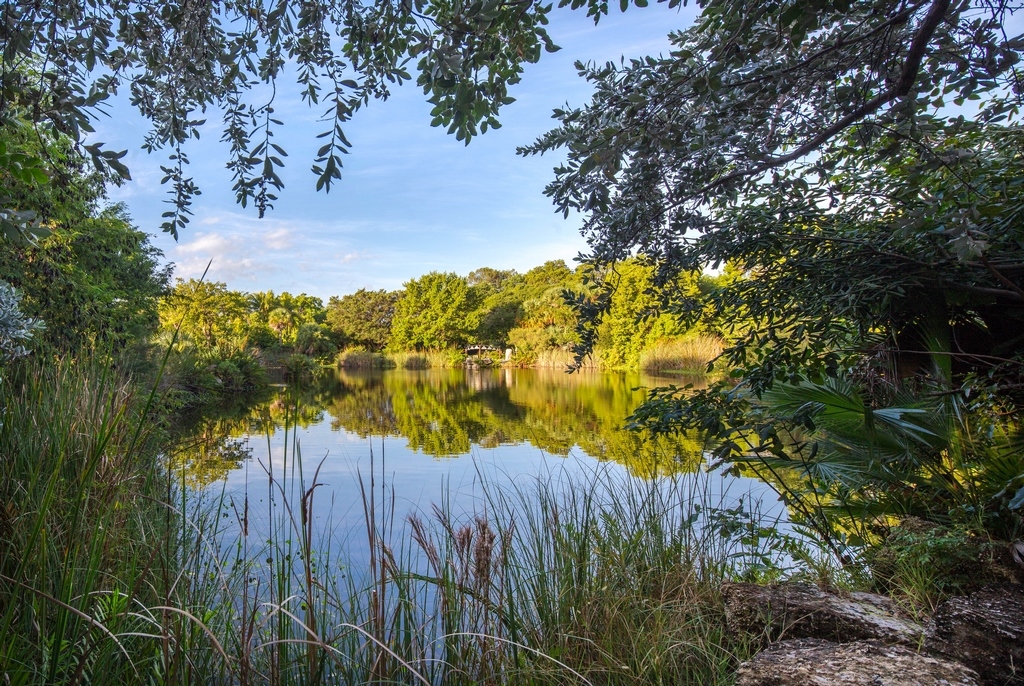 As a landscape architect, I’m passionate about creating gardens of every variety. But I like my work to benefit as many people as possible, so I get particularly engaged when these spaces are accessible to the general public.

This explains why I love working on botanical gardens and exploring the ways they allow me to focus on plants and education in fundamental ways. Through the past 30 years, I’ve had the privilege of working on slices of four different botanical gardens, so I also know the expectations I face from a diverse set of audiences.

In these cases, you’re typically working with boards of directors that care far more about revenues and fundraising than they do about your portfolio; with staffers who likely know more about the specific plants covered within the garden’s collections than you do; on behalf of extraordinarily opinionated garden aficionados who see these spaces as extensions of their own backyards; and in front of professional design colleagues who have thoughts of their own about how these spaces should develop.

Thriving in this environment takes determination and finesse, but as the three articles in this series will demonstrate, we at Raymond Jungles, Inc. (Miami, Fla.) have discovered that if we apply lessons learned through our design educations and experience in the field, fantastic things are possible.

Our first foray into this garden typology was at Fairchild Tropical Botanical Gardens in Coral Gables, Fla.

By the time this opportunity arose, I had already spent many hours in the gardens, first as a student in the late 1970s and then in accompanying my friend, the great environmental artist Roberto Burle Marx, on many visits there during his numerous trips to Miami.

At some point in the late ’80s, I was approached by the director of a local bamboo society about expanding the representation of her favorite plant within the gardens. This small project eventually led to my appointment to a design advisory committee along with notable architects, landscape architects and key members of the garden staff. I donated my time, conducted significant amounts of research and learned lots of lessons along the way that led to our first big botanical-garden commission: the restoration of the garden’s Vine Pergola (which, almost 30 years later, is now being restored again).

Our second commissioned task was for the courtyard of the Fairchild’s Corbin Education Center, where we created another vine pergola with a bench, new paving and a mostly indigenous planting scheme. Soon thereafter, Hurricane Andrew (1992) had its way with the whole region: It did a tremendous amount of damage to the Fairchild gardens – but also created a vast number of opportunities to rethink and rework various garden features. 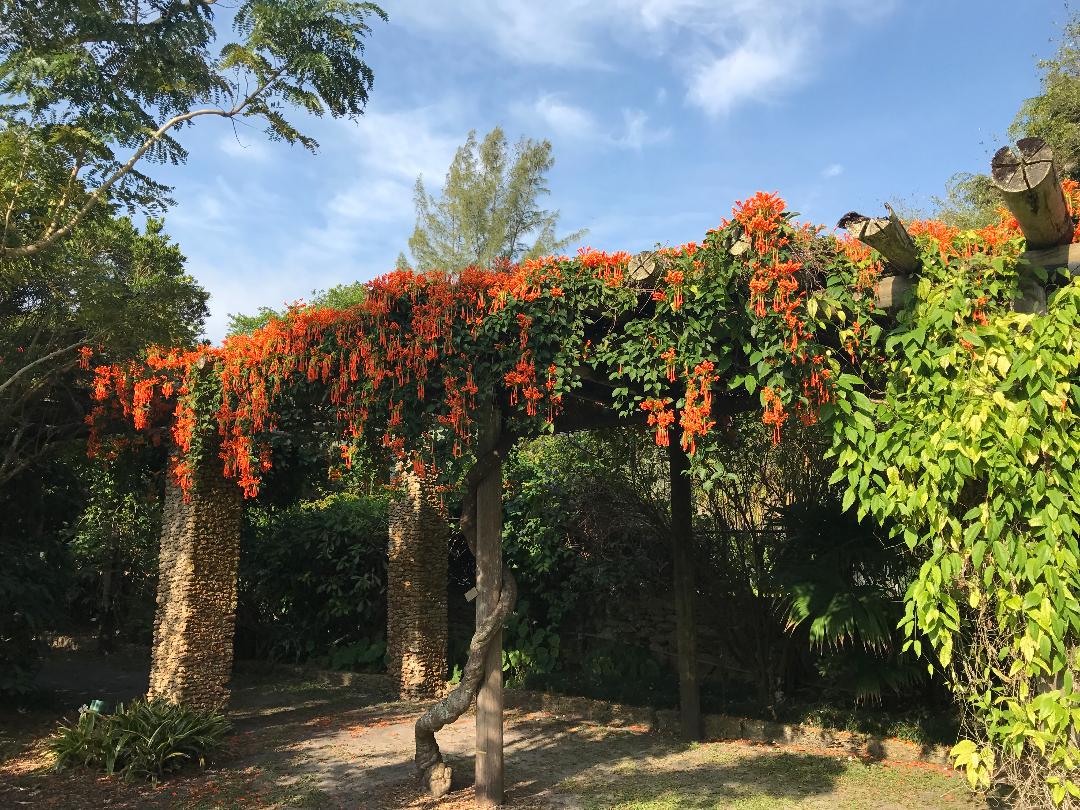 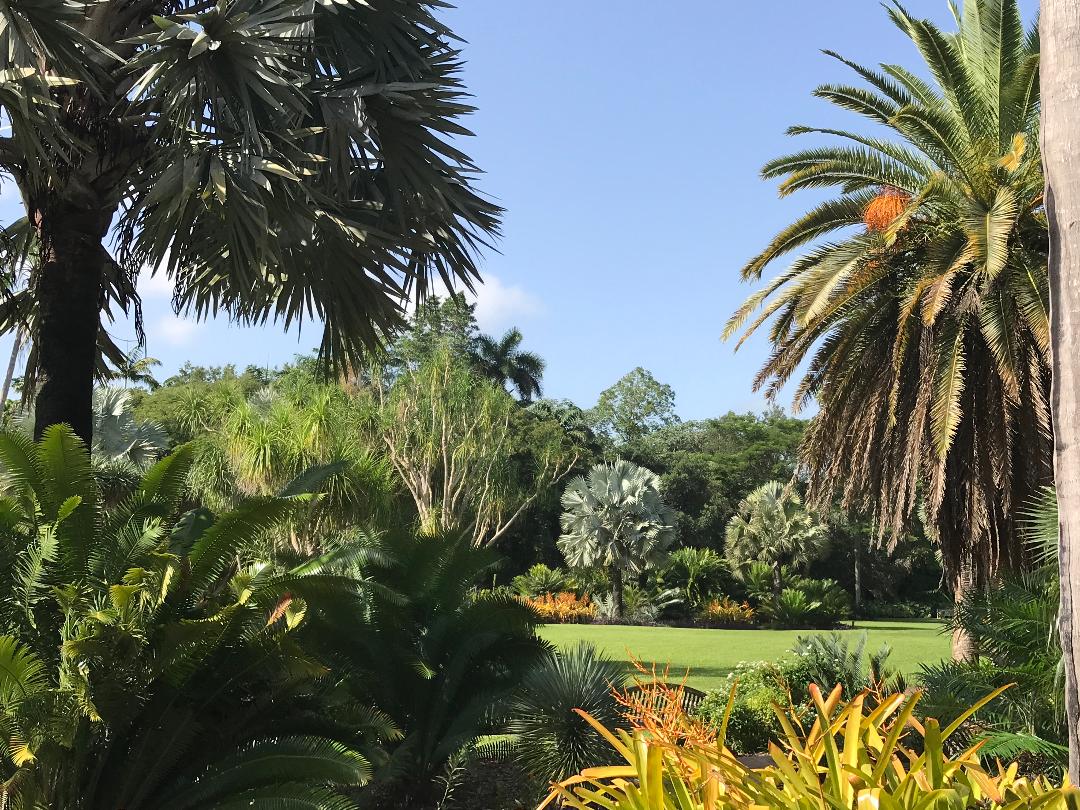 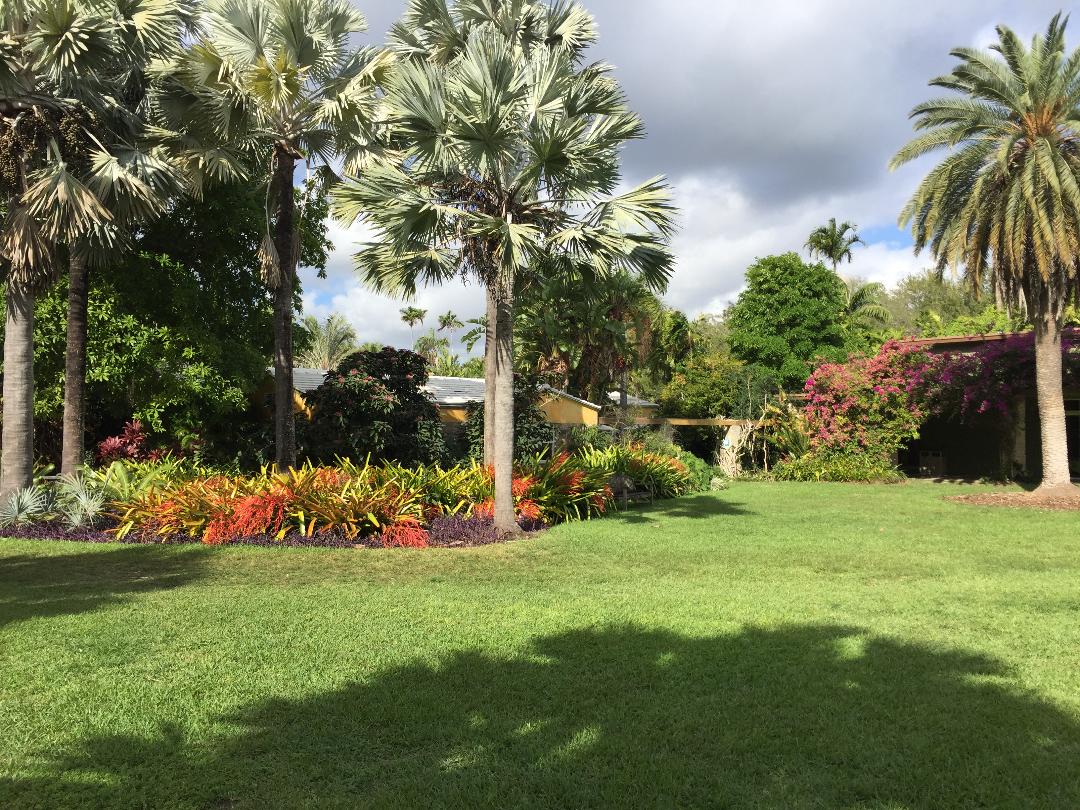 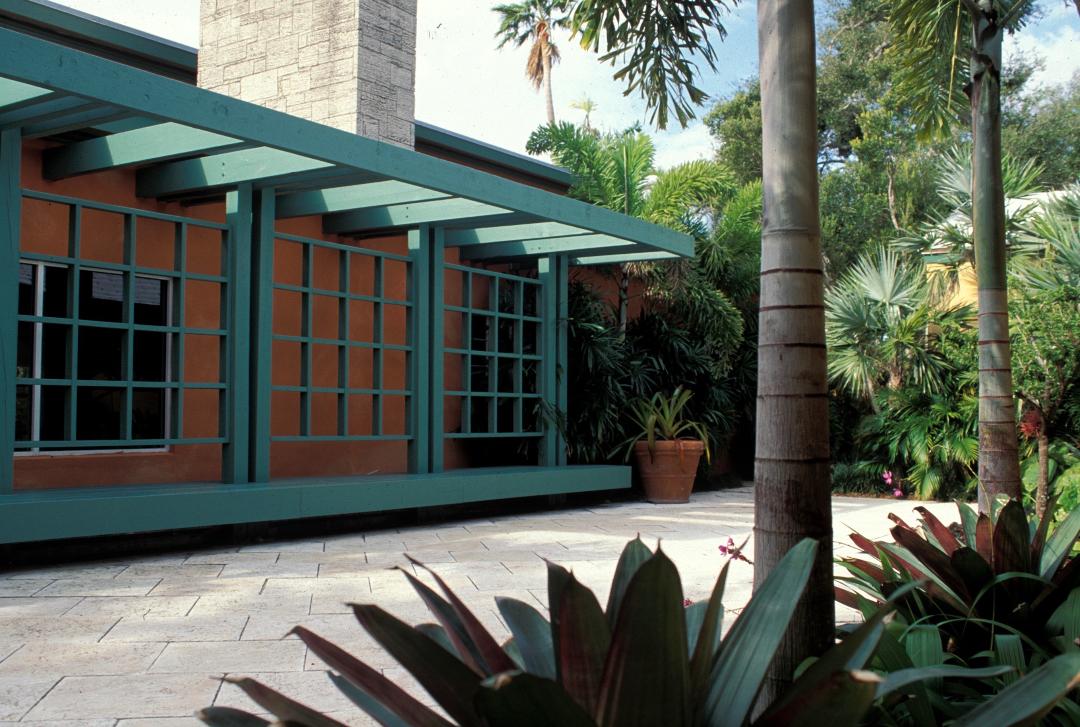 In the storm’s aftermath, garden director William Klein selected us to improve the main garden opposite the auditorium as well as the space adjacent to the former entrance gate and the library building. We were encouraged to move past the traditional collection-type garden, where selections and placements were based on family and genus. Instead, he wanted us to develop a garden with visual impact.

The eastern edge of the space had long been defined by the gardens’ famous collection of Cycads – plants of intermediate height with feathery, dark-green textures. To augment the scene, we introduced an overstory of silver Bismarckia nobilis palms (at that time still rare beyond Madagascar) in a Burle Marx-style grove and Aechmea blanchetiana ‘Orange Form’ as a tall groundcover mass.

We also used Tradescantia pallida ‘Purpurea’ as another groundcover. This is a plant I had once mentioned to Burle Marx as being one I did not like: He admonished me never to be prejudiced against a plant and told me there would come a time it would be perfect for a particular situation – words of a master!

We also had the buildings repainted in vibrant lime-based colors and added flowering vine trellises to their façades. Our design was controversial but achieved the transformation that had been requested. Since then, it’s become prominent enough that we used a Roger Foley photograph of the space on the cover of my monograph, The Colors of Nature (Penguin Random House, 2008).

In 1996 – just in time for Hurricane George – my family relocated to the far-western tip of the Florida Keys and the childhood home of my wife and mother of my children, the artist Debra Yates. Key West was our place in the world until we divorced in 2002 and I returned to Miami.

During this traumatic period in my life, Carolann Sharkey, the new director of what was then called the Key West Botanical Garden, entered my professional life. She had recently taken over the garden and was a force of nature: In short order, she convinced me to provide pro-bono design services for plantings related to a newly proposed visitor center designed by a local architect named Tom Pope.

The garden was small at that point, just a few acres. There were some interesting trees and plants from around the world, but the facility was mostly a disorganized jumble of predominately native hammock plants. (The mother Royal Poinciana tree had spread her offspring throughout the space.) Besides this mature, indigenous (but small) sub-tropical forest, the garden’s other great amenity was Desbien’s Pond, a tiny, spring-fed freshwater pool deep in the garden. 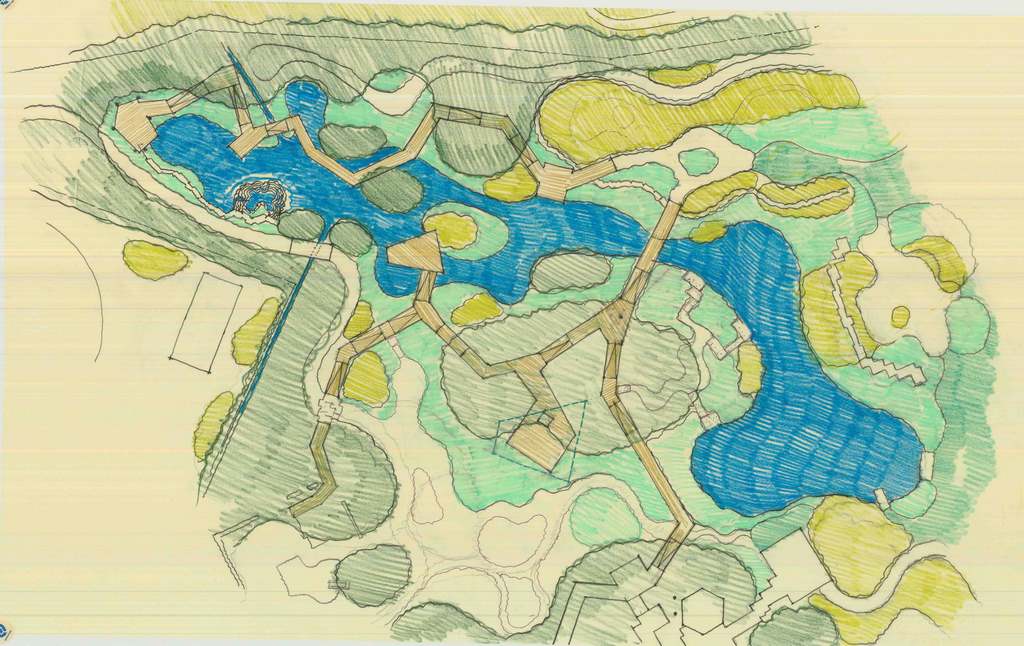 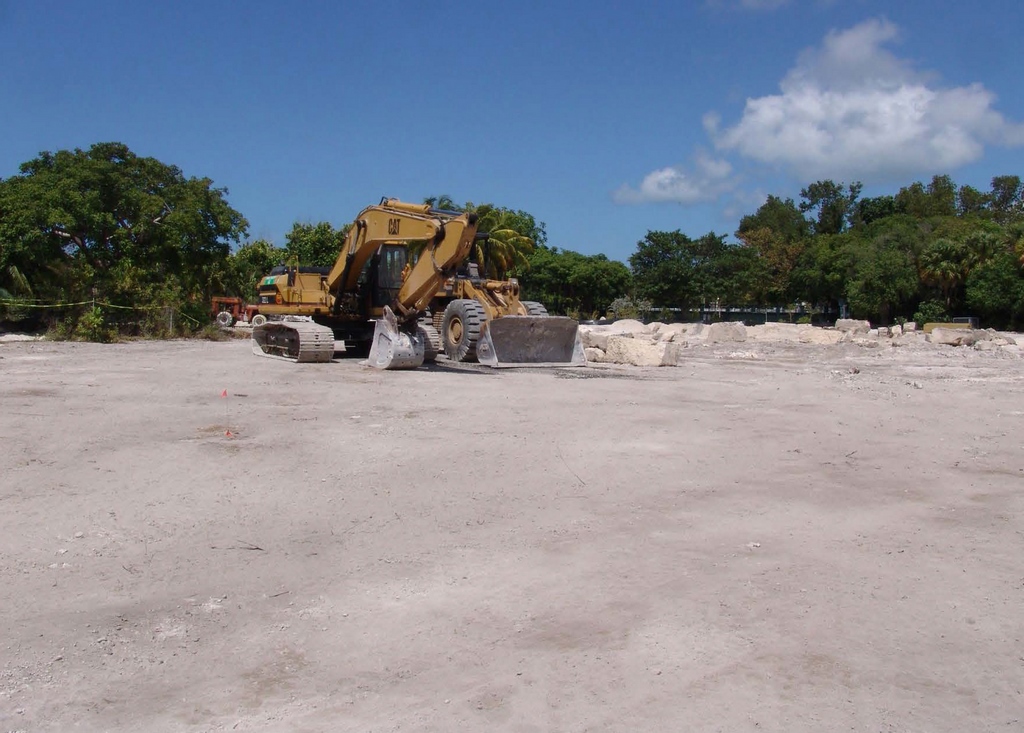 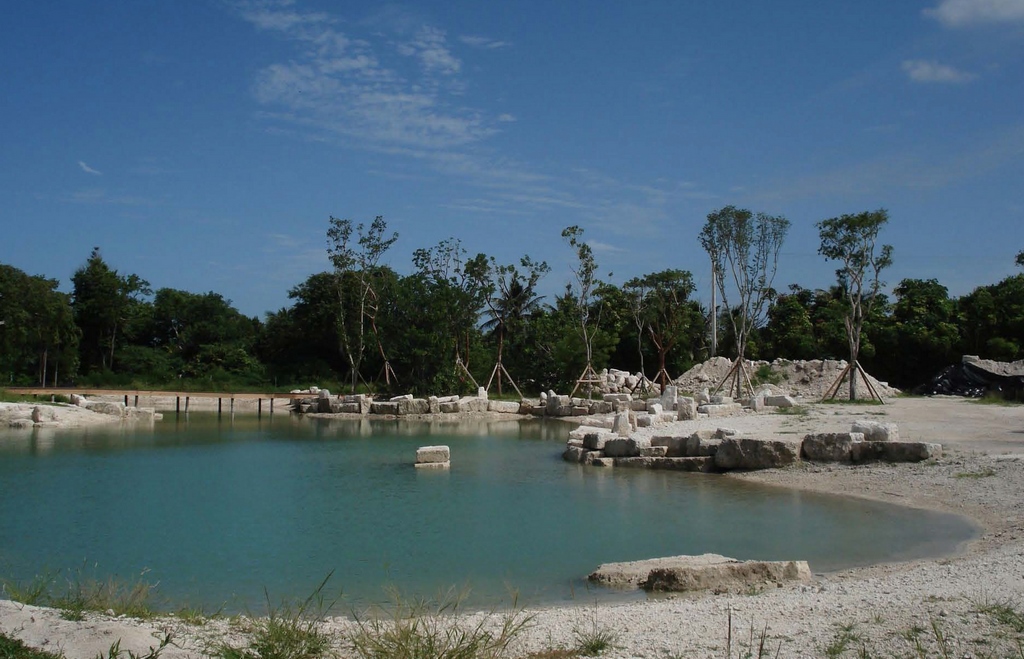 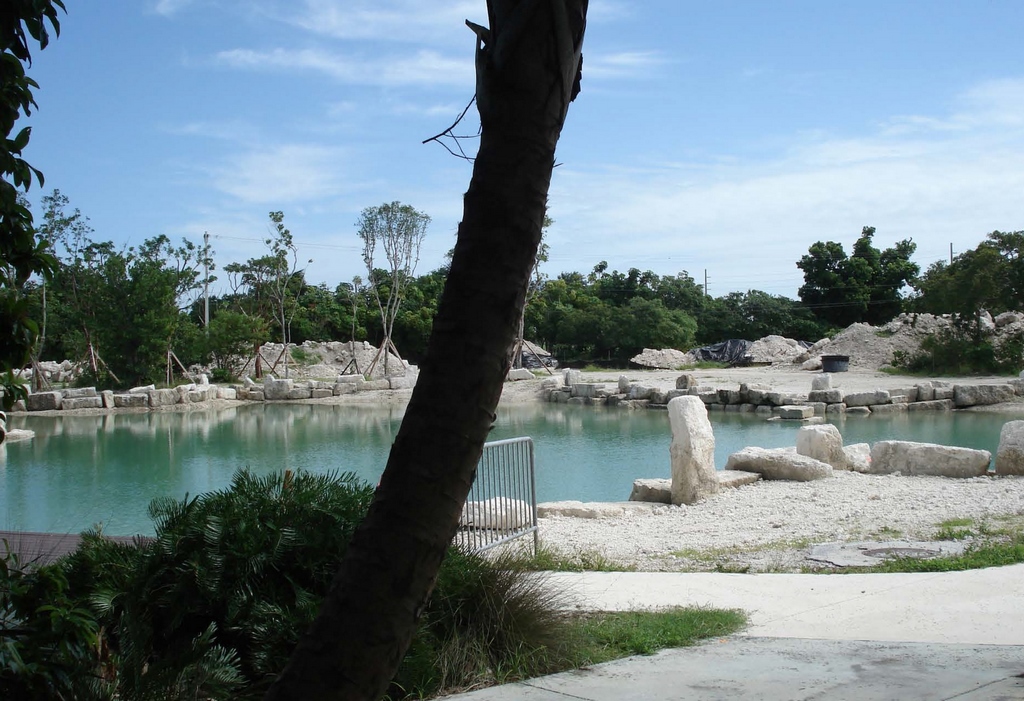 Our first contribution to the space was to guide a general shift in focus toward the garden’s essential attributes – that is, the natural hammock and the champion trees set against the island’s dense urban community. Out came the invasive exotics as amenities were added to attract the local populace and the Key West’s abundant tourists.

We focused first on creating a gathering space with a water wall clad in indigenous, rough-cut Florida Keystone. With brilliance and tenacity, Sharkey had also garnered donations for a garden-wide boardwalk and an educational signage system that we participated in designing. All of this happened rather quickly as the new millennium began.

But she had a much grander vision: Sharkey wanted the City of Key West to donate adjacent acreage that had operated as a military hospital during World War II. We participated, again mostly pro-bono and along with an engineering firm, in voluminous master-planning studies until the land was finally obtained. My company was back in Miami on the banks of the Miami River by the time Sharkey announced our assignment of using the reclaimed acreage to expand the newly named Key West Tropical Forest & Botanical Garden. We started by pushing native plants out to the perimeter of the garden, laid out the parking and pedestrian paths, created the Palms of Cuba Garden adjacent to the renovated Toppino Chapel and, for the majority of the newly acquired area, envisioned a pond and freshwater wetland habitat that would attract and highlight local flora and fauna.

Given the fact that Desbien’s Pond was spring-fed and ran with fresh water, we hoped (and rightly so) that we’d be able to tap into the same groundwater supply by digging through the stubbornly dense coral-reef bedrock. Once excavation was complete and a new, larger lake had taken shape, we installed some of the excavated keystone slabs to bring texture to the watershape’s edge.

Through all of this, we relied on support from the engineers at RMPK Group, Sarasota; Brad Waller from Hydrologic Associates USA, Miami; and a team of distinguished scientists including Drs. Stuart Pimm (biologist/ecologist), Marc Minno (butterfly expert) and George Gann (a specialist in native Florida plants).

Plants for the restored areas were selected from among those already found in the garden’s displays, with an emphasis on native species that did best in the Key West climate. From the start, the new area and especially the larger lake have been favorite backdrops for weddings as well as special events hosted by the garden.

In tending to both lakes, the ambition was to attract local wildlife as well as migratory birds. To make this happen, we consulted with scientists, habitat designers, bird experts and avid community members to achieve the desired results from the perspective of the fauna as well as for garden visitors keen to see a variety of creatures in and around the hardwood hammock. Our principle tasks here involved extending pathways to carry visitors beyond the main entry, starting with a long-view promenade showing the garden’s extent before guiding them to multiple destinations on loops leading away from the main trail. By the time we were done, there were new boardwalk trails that meandered through stands of tropical hardwood trees and branched off into a variety of gathering spaces, overlooks, intimate garden spaces, teaching spaces – all sorts of well-planted, well-appointed destinations identified generally by the board of directors as being important to the garden’s appeal. We also included a bridge, a garden terrace/plaza for events, a butterfly garden and a newly planted area of native hammock.

Our decision to focus a botanical garden on its watershapes extends from the Mexican architect Luis Barragán, who wrote that “water is the heart and soul of a garden” – a concept and philosophy very much in keeping with our passionate desire to bring large numbers of people close to nature.

In doing so, we benefitted from working in close coordination with the gardeners who’d been tending the garden’s plants for years: Simply by listening and observing, we learned from them, won their trust and earned their respect. Before long, we were actively exchanging ideas and working together to tailor garden spaces to please more visitors – locals and tourists alike – while creating a treasured and enduring community resource.

Next: Another small urban botanical garden, this one including a tribute to Roberto Burle Marx.

Raymond Jungles is founder and principal of Studio Jungles, a landscape architecture firm based in Miami, Fla. His prime inspiration and the key to his passion for landscape architecture stems from his longtime relationship with Brazilian artist and environmental designer Roberto Burle Marx, and his current practice is firmly rooted in Florida and the Caribbean basin with a focus on residential, resort and community design. For more information, visit raymondjungles.com.