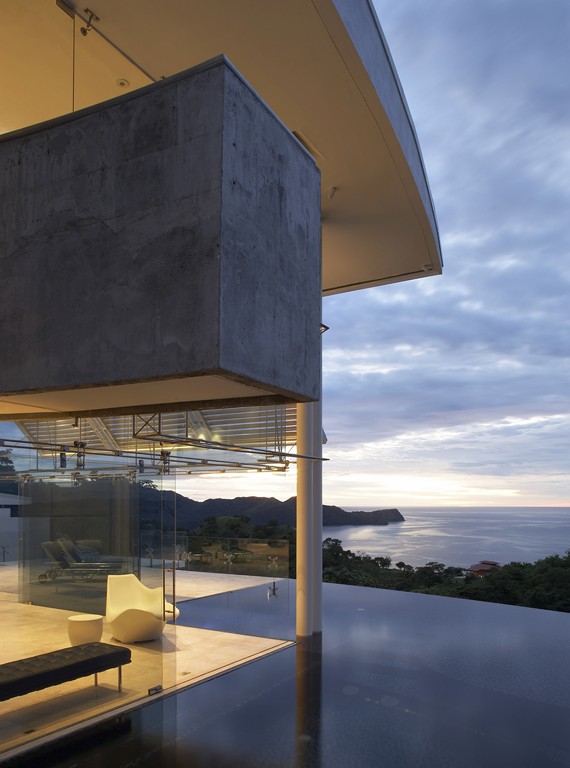 ‘I want the house to look as though it is floating on water.”

That was what architect Victor Canas told me when I was called out to visit this site on the northwestern coast of Costa Rica. It was a brilliant idea, certainly one that befitted the spectacular mountaintop setting and its breathtaking 360-degree views of rugged coastline, forest greenery and assorted perspectives to horizons in all directions.

I had the advantage in this case of already having built a much more ordinary swimming pool for the homeowner some 20 years ago – and the further edge of being the only watershaper in the country in the business of designing and building such ambitious projects. When the architect showed me an overhead view of the home’s footprint and the space for the pool, I was inspired: I knew right away that this was going to be something special.

For his part, the client simply said that he wanted something wonderful and was willing to trust my judgment. I knew he was serious, given the soaring architecture of the home and its spare-no-expense approach to every detail. More than a year in the making, this pool is the most ambitious and beautiful I’ve tackled to date.

As I explained in the December 2005 issue of WaterShapes (“Pure Vision,” page 48), Costa Rica has experienced an upsurge in affluence in recent years. Within that sweeping trend, however, this particular home project sets a new standard for grandeur and opulence amid the Central American landscape.

As is true of many of the high-end projects I’m doing these days – especially those with similarly glorious ocean views – the vanishing edge is a prominent feature here. In this case, the approach has been taken to something of an extreme: On the view side, the pool has a sweeping, 100-foot-long edge that stretches from one end of the house to the other.

The majority of the wet area is actually just six inches deep – a reflecting pool covered in more than 3,300 square feet of a rich, dark-colored tile mosaic in the Moroccan Desert pattern from Oceanside Glasstile (Carlsbad, Calif.). A small deep section is tucked up alongside a portion of the home’s angled glass walls – an unusual configuration with a depth that is nearly indistinguishable from most viewing angles.

The entire broad surface reflects both home and sky, providing an extraordinary intermingling of reflected light, gently rippling water and mirrored views of the home’s architecture from a variety of exterior and interior spaces. I’m proud of the fact that I brought several ideas of my own to the design process, including the key decision of setting the elevation of the water at the same point as the interior floors of the home. 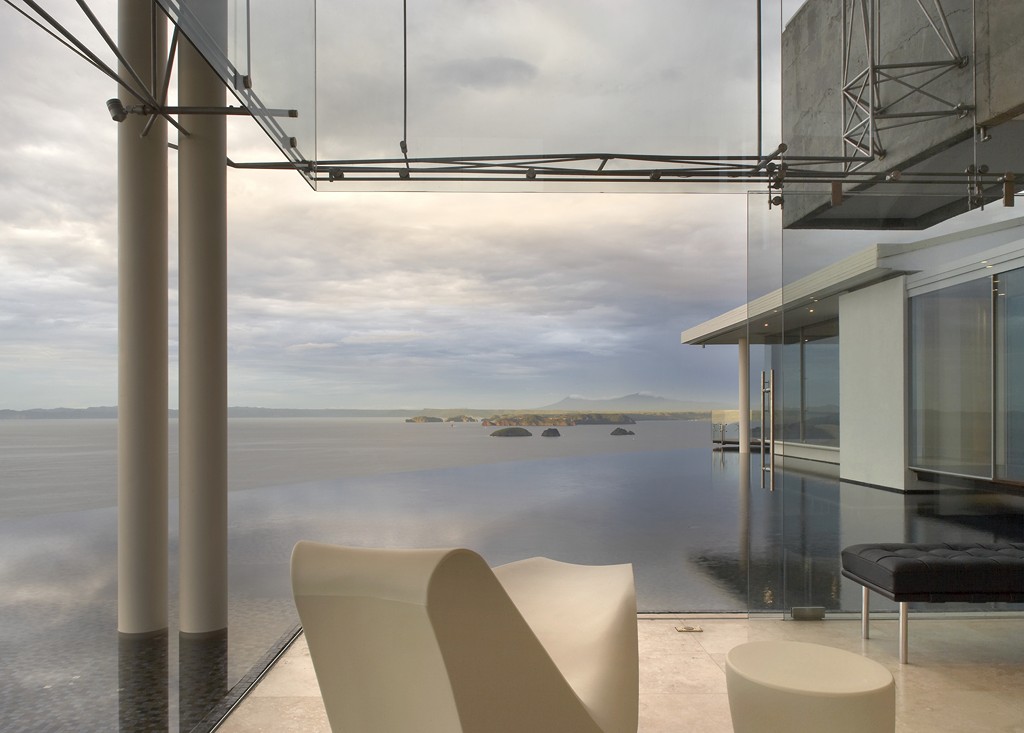 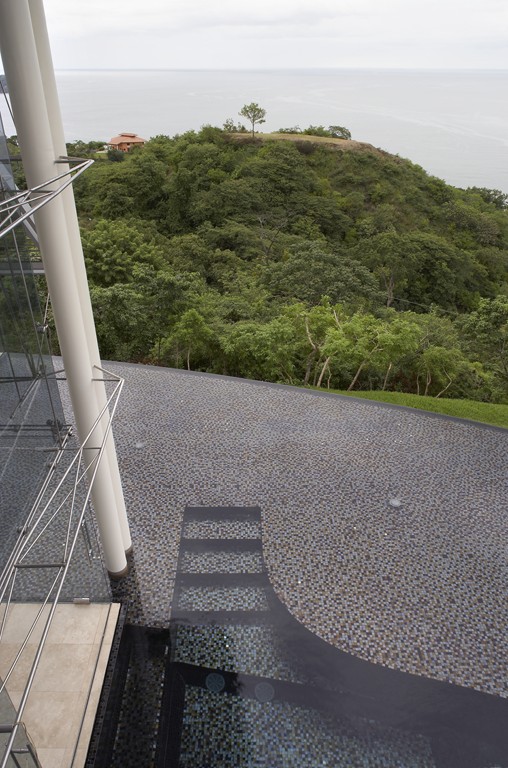 The water is separated from the home’s glass panels by a narrow slot-overflow feature that runs the entire length of the pool. This almost-invisible border was inspired by similar treatments I’ve seen in the work of the late, great architect John Lautner and his equally amazing protégé, Helena Arahuete.

This knife-edge effect, coupled with the sameness of levels between the interior and exterior spaces, allows for easy visual connections between the spaces and creates a fantastic intimacy between the living spaces and the shifting reflections outdoors. Now that it’s finished, the effect is sublime and seems effortless, but it required substantial support in hydraulic design and construction planning from Skip Phillips, co-founder of Genesis 3 and owner of Questar Pools & Spas of Escondido, Calif.

To ease passage to and from the “floating” home and provide clear access to great viewpoints, we installed wooden bridges and cantilevered decks over the water’s surface at several points. All of these features are set off by glass panels and stainless steel mountings that integrate them as dynamic extensions of the home’s interior.

With hundreds of linear feet of water-in-transit edges – every inch crucial to the overall visual effect – our crews worked extraordinarily hard to establish all weirs with near-zero tolerances. It paid off: When we started the circulation system up for the first time, we made only a few minor adjustments to achieve uniformly wetted edges at extremely low flow rates. 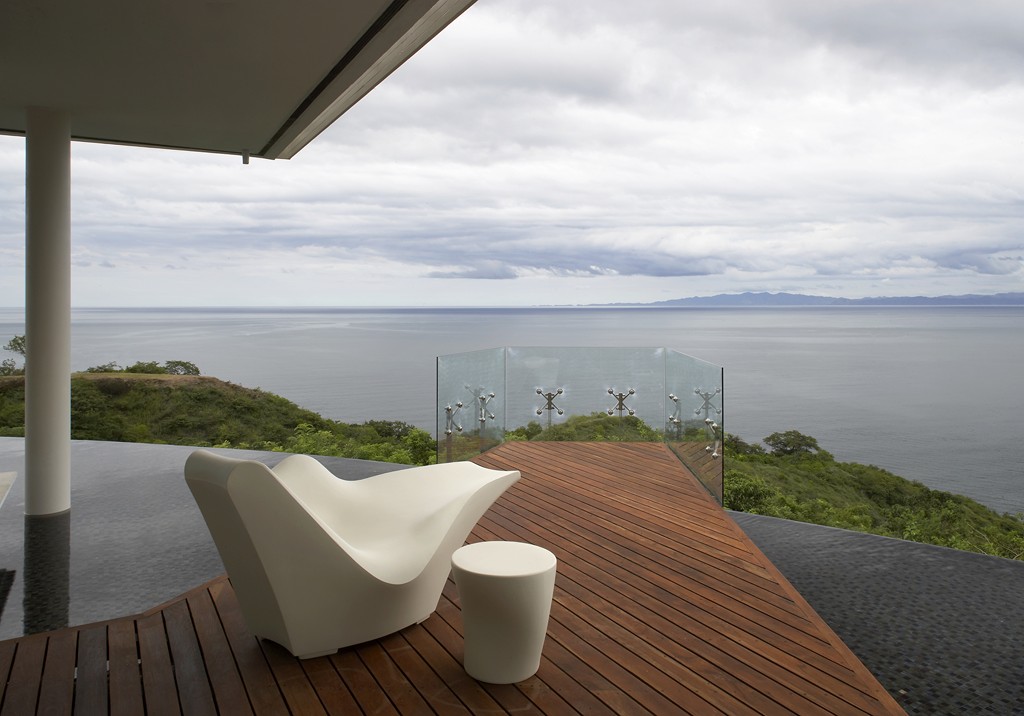 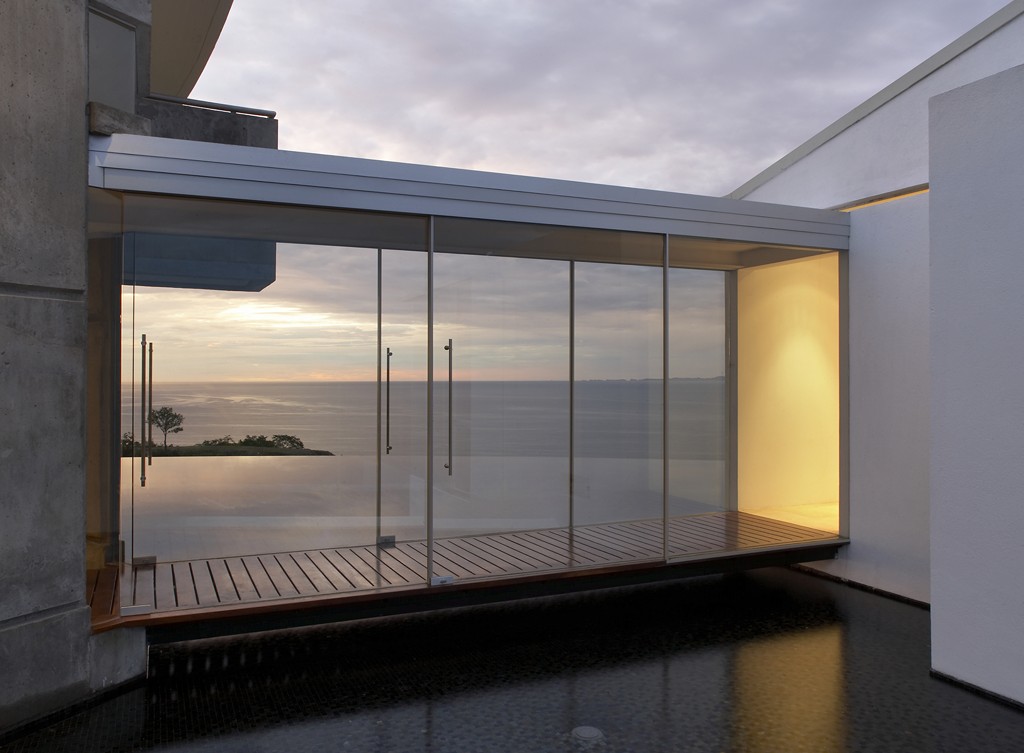 To move the water over the vanishing edge and into the overflow slots, we installed three two-horsepower WhisperFlo pumps from Pentair Water Pool & Spa (Sanford, N.C.). The water is filtered by three Pentair cartridge filters and is sanitized by a saltwater sanitizing system from AutoPilot (Fort Lauderdale, Fla.) combined with an ozone-generating system from DEL Ozone (San Luis Obispo, Calif.). At night, three PG 2000 fiberoptic illuminators from Pentair enhance the ambience.

The striking simplicity of the pool works with the geometric minimalism of the home’s architecture to amplify the near-intoxicating natural beauty of the surroundings. I’ve spent enough time on site to know that it can be difficult to keep your mind on what you’re doing because the views are so compelling. The verdant coastline stretches literally as far the eye can see, all the way to Nicaragua in the northwest.

So spectacular were the results that I came to view photographing our work as part of the project itself, not as an afterthought. I took scores of pictures as the work unfolded, and things were far enough along last fall that I was able to include a representative shot in my December article. But the images you see here aren’t mine: They were taken by a professional – a remarkable artist who did a particularly wonderful job of capturing the subtle dance of light on the water that takes place as the sky changes during the day. 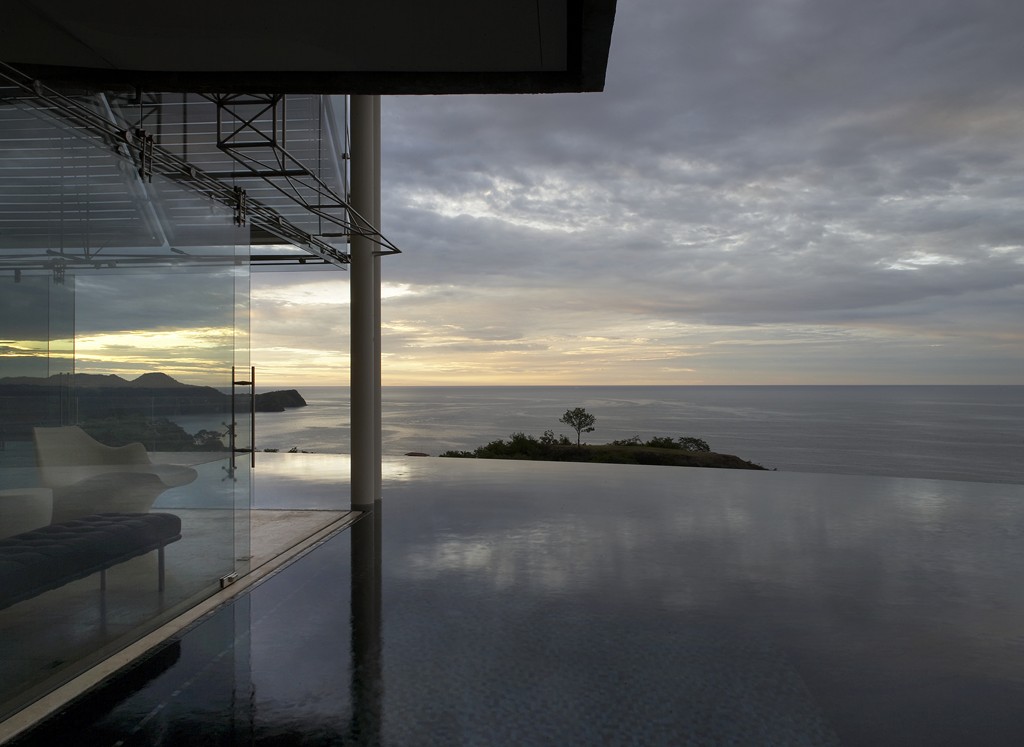 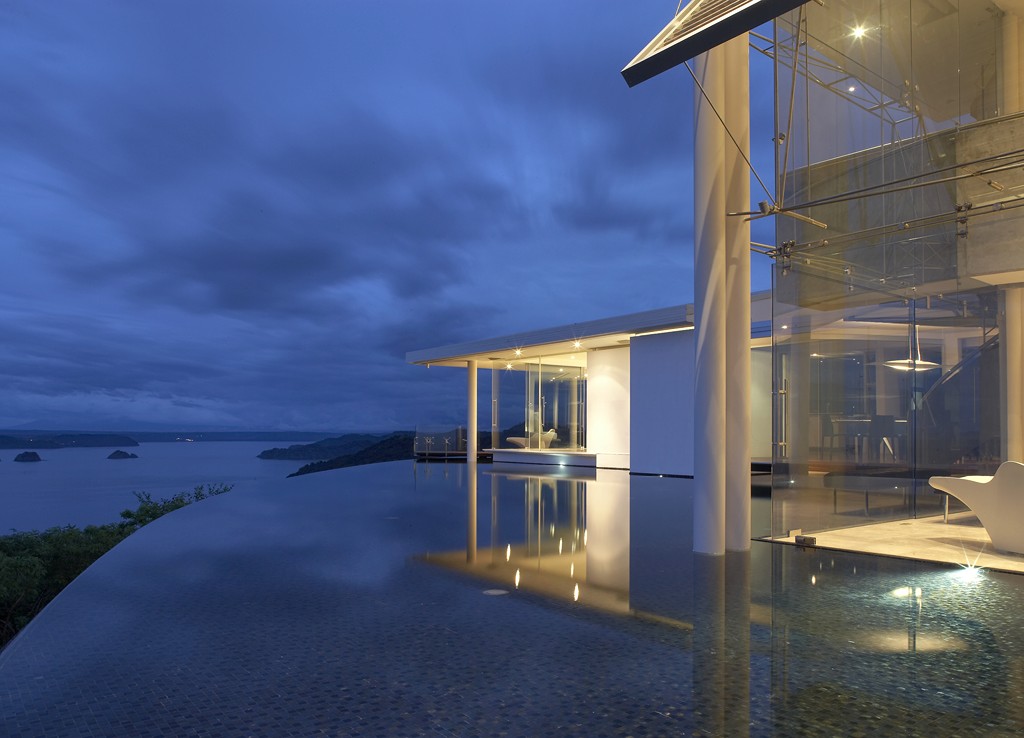 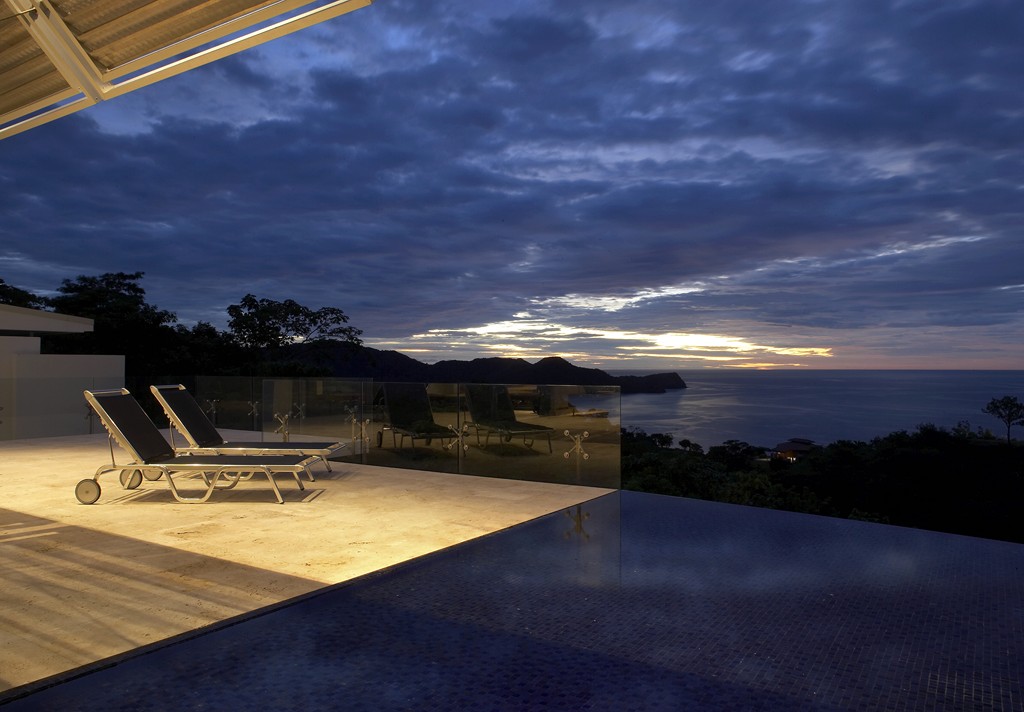 As you’ll see in these images, as special as the pool may be, our success here is all about the way the water reflects the setting. In that sense, this project was never about the pool, but about what it could lend to its exquisite surroundings by serving as a mirror to that environment.

The way I see it, the pool is a giant looking-glass from which the home will rise forever, floating on an every-changing canvas of light, color and bewitching beauty.

Juan Roca is a watershape designer and installer based in Guanacaste,Costa Rica, and founder and principal of Aquart, the country’s only custom watershaping firm. Born in Barcelona, Spain, he holds a degree in industrial engineering and began his career in swimming pool construction in 1975 in San Jose,Costa Rica’s capital. Roca’s search for watershape-design education led him a few years back to the Genesis 3 Design Group, which he credits with transforming his approach to design and construction and led him to reconstitute his company with its current name in 2003 with a new focus on highend custom work. He can be reached through his web site,www.aquart.net.