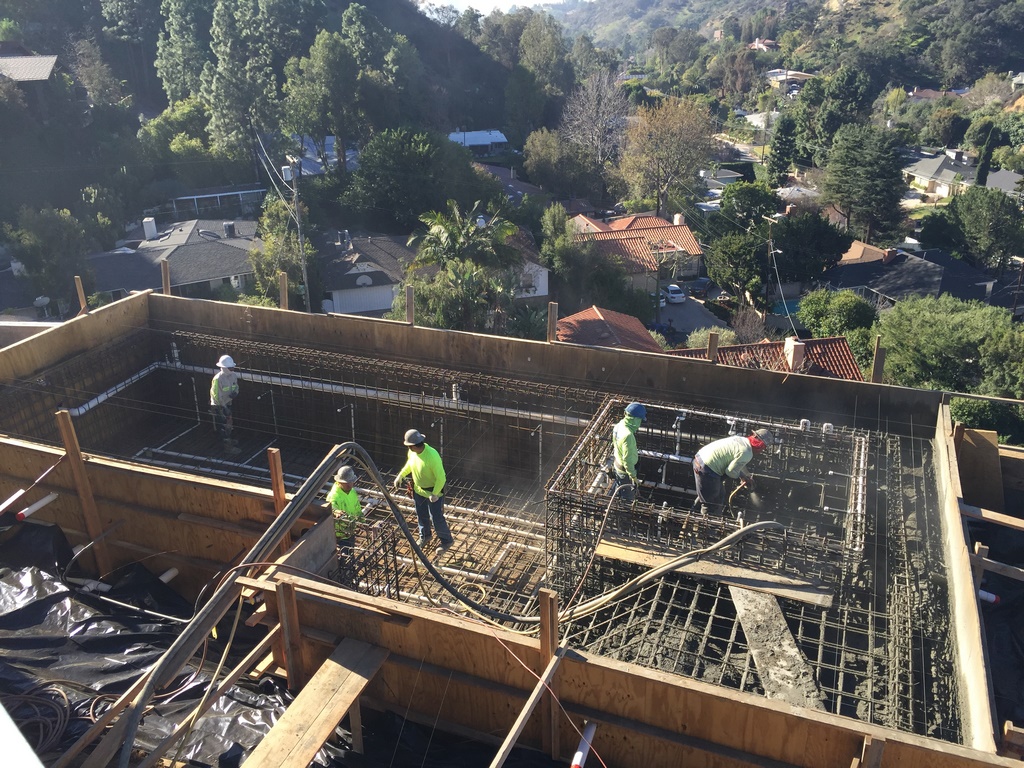 Through the years, I’ve been involved in a number of amazing watershaping projects in the southern California region. I’m particularly comfortable with hillside work and have designed and built breathtaking pools and spas on my own, but I spend most of my time these days building to the specifications of ambitious architects and designers who know exactly what they want but may lack the expertise or local resources required to ensure both great beauty and full, efficient functionality.

One consequence of our willingness at Fluid Dynamics Pool & Spa (Fullerton, Calif.) to build to other’s designs is that we’re constantly running into new clients to whom we’ve been recommended but who really don’t know anything at all about us and insist that we explain why we should be considered for such an important role in the overall project.

That was certainly the case this time, but it helped that the designer recommending me to the client happened to be Shane LeBlanc, a friend and long-time associate who runs Atlanta-based Selective Designs. By this point, he’d also drawn my friend Jimmy Reed (Rock Solid Tile, Calabasas, Calif.) onto the project team to take care of the tile installation and needed a local firm to take care of construction.

I passed muster with the client’s Switzerland-based office but still had to live with the fact that, as an architect and developer, the client wondered why he couldn’t just build the pool himself.

As LeBlanc noted in the first of this set of three articles, the client was intimately involved in every decision related to the project and had skilled craftspeople at his disposal to take care of almost any design, engineering or construction task. But he was also a realist and, despite his belief in his own company’s capabilities, was persuaded by LeBlanc (and, eventually, by me) that there were things going on with this project that required a watershaper’s expertise.

That didn’t stop him from starting work on the pool before my team and I came on site by taking care of setting up a foundation of piers and grade beams on the property’s outside edge. He did so in close consultation with LeBlanc and in accordance with the plans, of course, so everything was done properly from a pool builder’s perspective.

We arrived to find the house in the early stages of construction – foundation in place but no walls as yet. The client had also begun work on the pool shell, again using LeBlanc’s plan as a guide. By the time we arrived, this included the start of the forming, which we completed before beginning the complicated task of installing the plumbing needed for a perimeter-overflow pool. With the simple, clean lines of the home’s architecture and the all-black color scheme for the pool and spa, it was important to establish mirror-like water surface – even with all of the pumps running. LeBlanc had devised a comprehensive plumbing plan, but it was up to us to work out the actual placement of the piping within the shell to achieve desired results with no vortices of the sort that too-commonly appear with watershapes of this kind.

Given the tile finish proposed for the pool and spa, the timing of our arrival was just about perfect: Once we stepped in, we collaborated closely with Reed to make certain the soon-to-be-shot shell would meet his needs – and we have more than enough experience with these critical matters of shaping shells to make tile application a more efficient process. No concrete surface is perfect, but ours come close.

The one major challenge we faced had to do with an unusual personal deadline: I had purchased tickets to surprise my wife with a trip to Paris for our 20th anniversary – and the schedule became super-compressed as the departure date approached. This involved us in a few extra-long days on site in making everything ready for a Wednesday shoot that lasted until 8 pm, well after dark. Happily, I made my flight the following day. 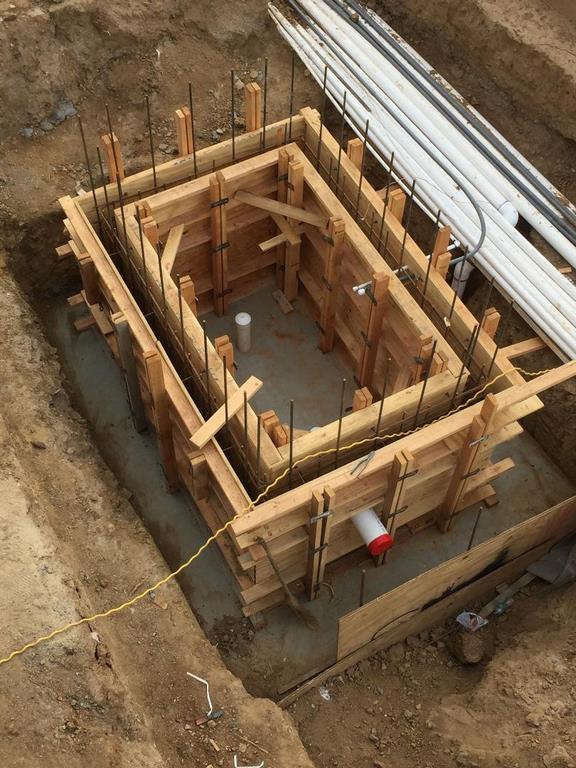 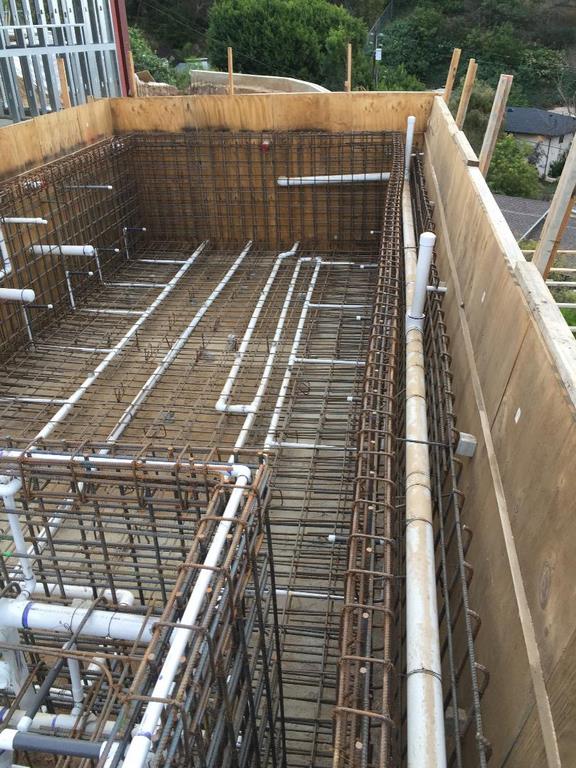 By the time I returned, the site was a beehive of activity. One major task was setting up the equipment pad about 120 feet away from the pool along one side of the house – actually out near the street. The client’s team had formed up the surge tank; we completed the piping to the tank, enabling them to pour and waterproof it appropriately.

All of the equipment and lighting came from Pentair Aquatic Systems (Sanford, N.C.), while the sanitizing is handled by a chlorine feeder from IPS Controllers (Temecula, Calif.). The system also includes a conventional gas heater mainly to get the spa’s water temperature to the right level, but there’s also a solar water-heating system tied into the home’s solar water-heating system that keeps the pool on the warmish side at all times – important in such an exposed, breezy setting where even summer nights can be cool.

The choices we made on the pad to some extent reflect the fact that the client himself never foresaw using the pool. Given his sense that the composition was doing its job adequately if it served as no more than a reflective surface in a strictly decorative role, he insisted that the equipment and control systems be kept at what seemed a pretty basic (but perfectly functional) level for such a high-end project.

While construction of the pool was relatively direct, access was frequently an issue because of the steepness of the slope. This made working on the far side of the site difficult at best: It wasn’t quite like stepping off a cliff, but the soil was angled in such a way that getting a decent sense of sure-footedness was never easy.

As LeBlanc noted in his article, the client insisted on this street-facing part of the pool being presentable: It could easily be seen from a major road at the base of the canyon below, and the client didn’t want anyone to see anything that compromised the overall look of the property. This meant we spent some time addressing these surfaces, even though they were unlikely to be seen by anyone but a truly curious passerby.

In addition, there was some shadowing we noticed on the far-side edge wall when we removed the forms after shotcreting. It wasn’t too bad, but it wasn’t perfect, so we chipped out some areas on the wall and re-shot a small area while fighting gravity – whatever it took to avoid any future effects on the overall sustainability of the structure.

This concern over downslope appearances also led LeBlanc to some unusual measures in pipe placements: The owner was dead set on making them all invisible to anyone looking upslope from below: He really wanted a nice, clean façade. We typically do not like to have a gutter’s gravity-line pickups discharge vertically – this can lead to excessive noise – so we worked with LeBlanc to come up with a new approach that satisfied everyone. It wasn’t that hard to do, but it involved an experienced crew in working with some unconventional angles. 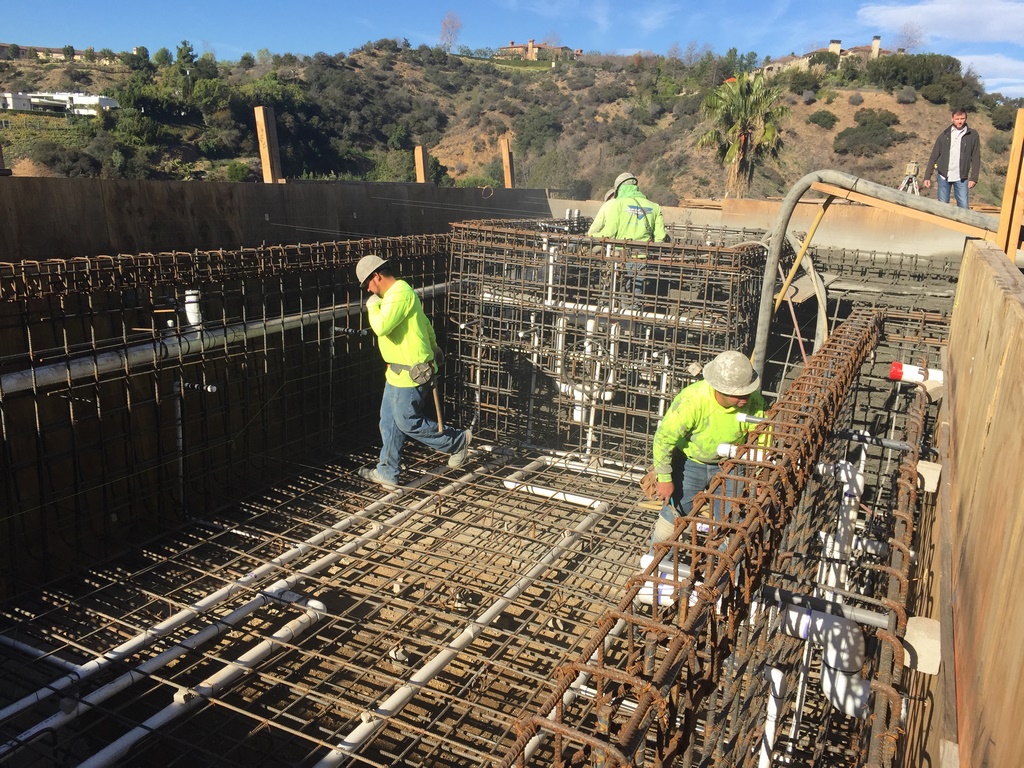 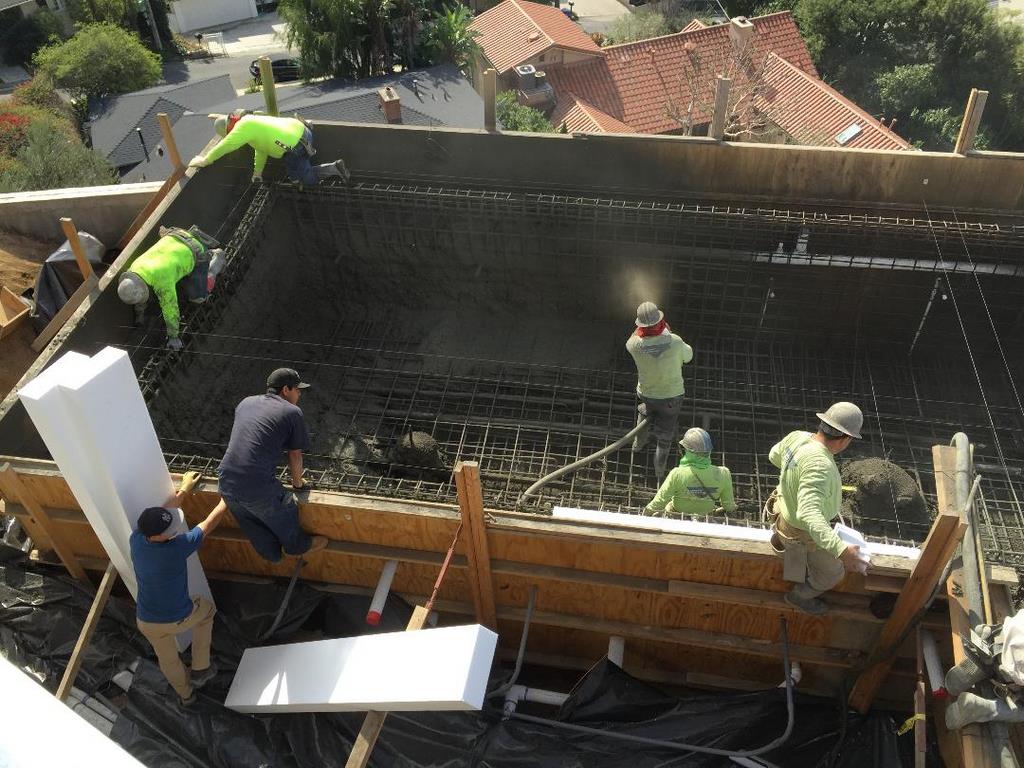 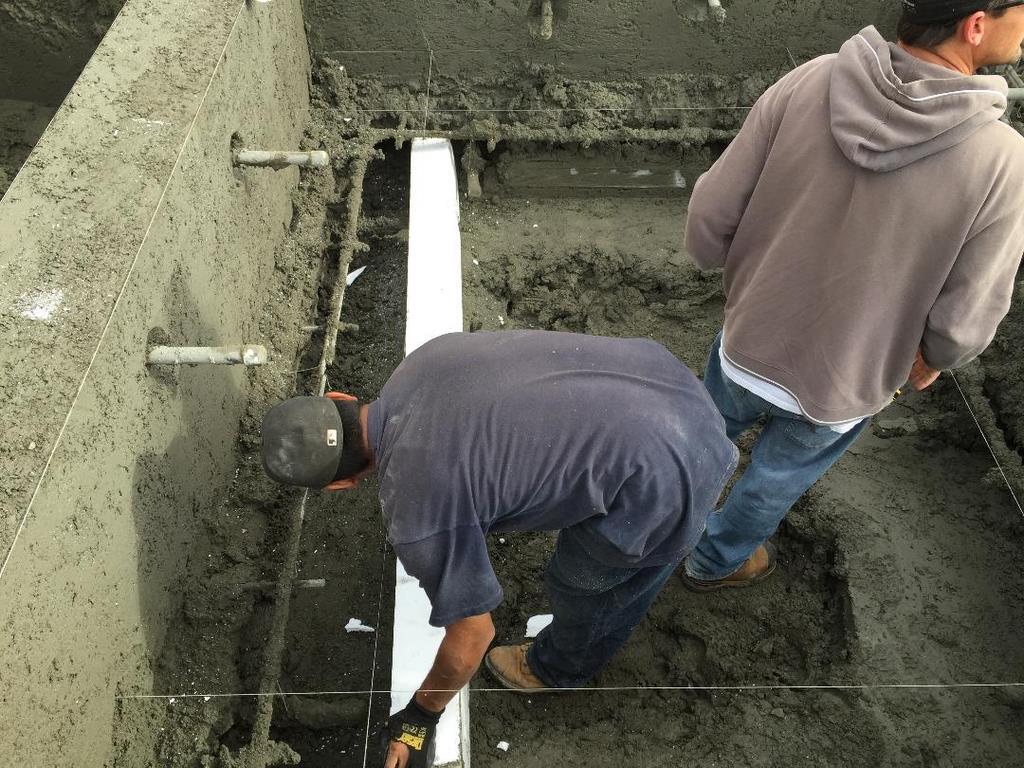 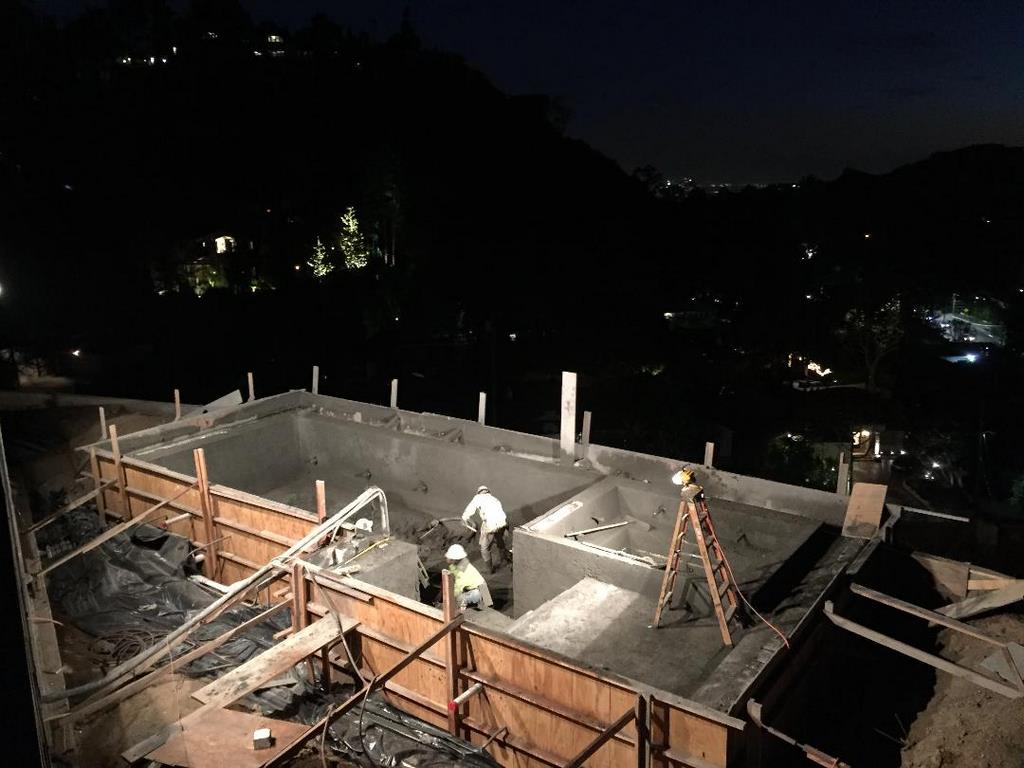 For all that, these were minor issues compared to the rigors of our work within the shell: Before we applied any shotcrete, we sat down with Reed and went through every aspect of his plan to come up with appropriate placements for every penetration within the pool and spa. These adjustments sometimes came down to fractions of inches.

The tile selected for the job came in 24-inch-square pieces – large for a pool application and quite challenging with respect to minimizing visual intrusions. We found 12-inch-square commercial suction covers in black plastic (from Hayward Pool Products, Elizabeth N.J.), which was great, but then we had to pinpoint and secure specific placements for lights, return lines, jets and a cleaner port before shotcrete application to keep them away from grout lines.

Believe me, it was a long, detailed meeting – and meant lots of adjusting of the piping before the shotcrete crews arrived – but none of us had any desire to disrupt the gridded visual flow that had become so important to the project. And all of us on the team were on the hook here, given how much group effort had been involved in getting the client to think in aesthetic ways about the watershapes’ interiors.

The toe-kick detail we included in the spa was another source of professional exposure here: We pool guys all saw it as an essential element of the overall design aesthetic and had to bring the client along for the ride against some initial resistance. But it’s a mark of this particular project that these discussions became less difficult as his faith in our collective judgment and experience grew.

As I’m certain my colleagues in this process can attest, this was a case where the familiarity we had with each other – as friends, as like-minded watershapers, as professionals at the top of our games – made pursuing the ins and outs of this project easier all the way around.

From my perspective, it was all about trust. For example, if I wanted to suggest a change – such as moving a pipe or substituting one piece of equipment for another – I always made it a practice to discuss it with Shane LeBlanc first. I never assumed anything, nor did I ever go straight to the client: I trust LeBlanc’s judgment and know his orientation for quality, but on the level we were operating, we could never allow egos to be a consideration. 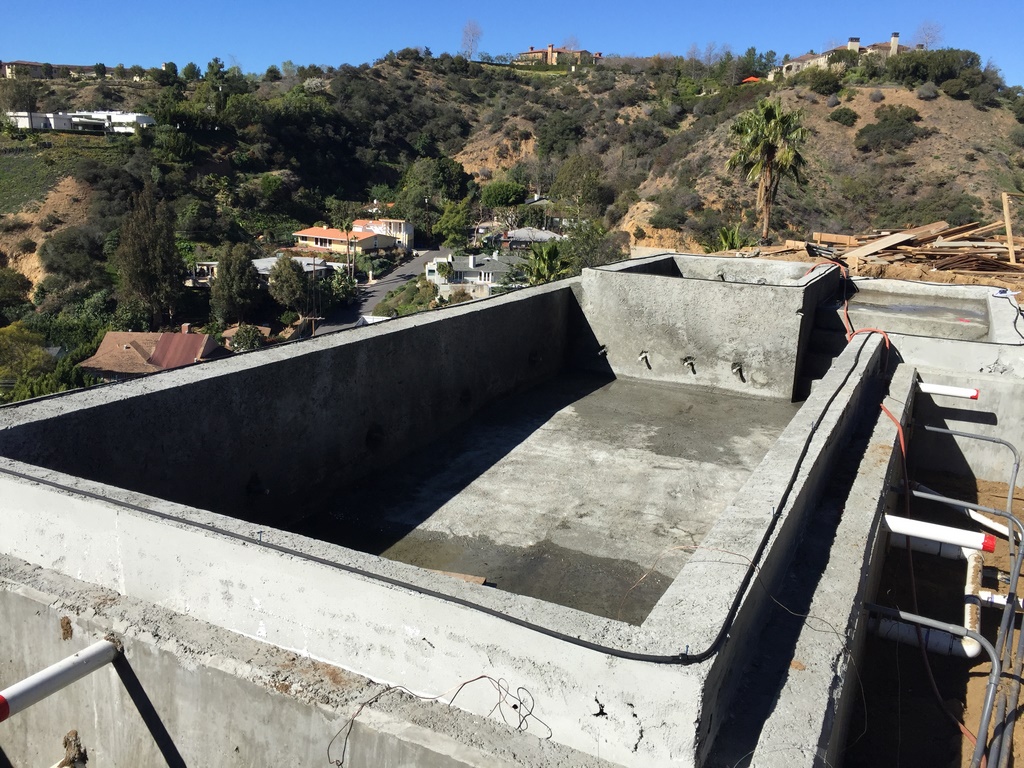 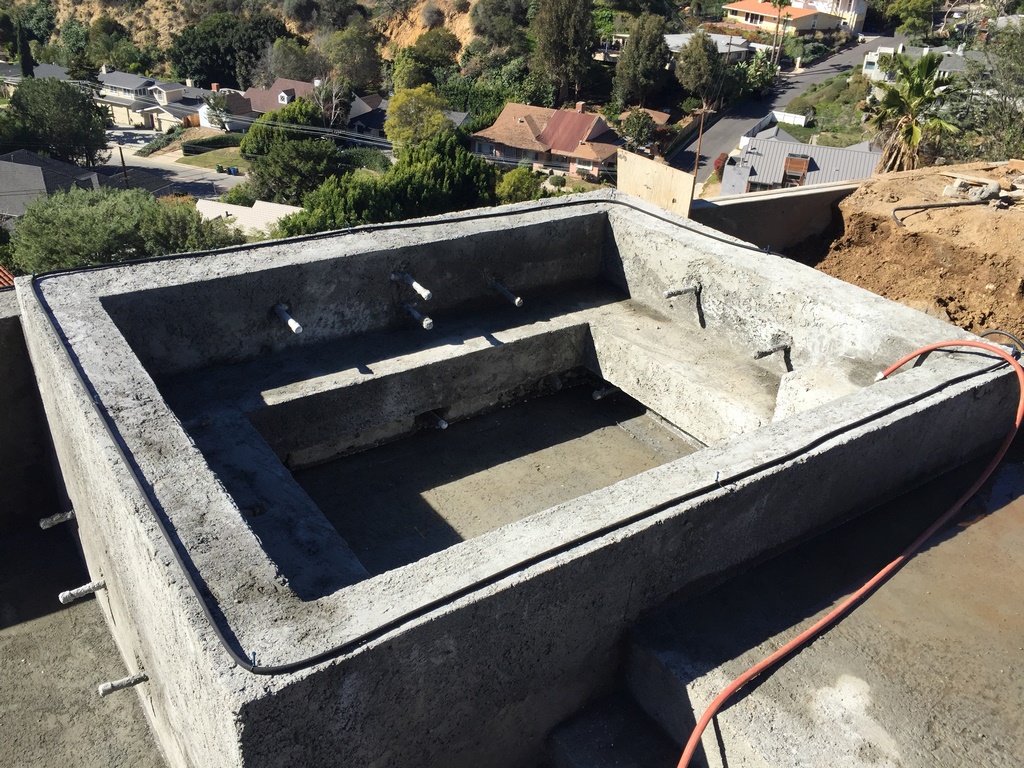 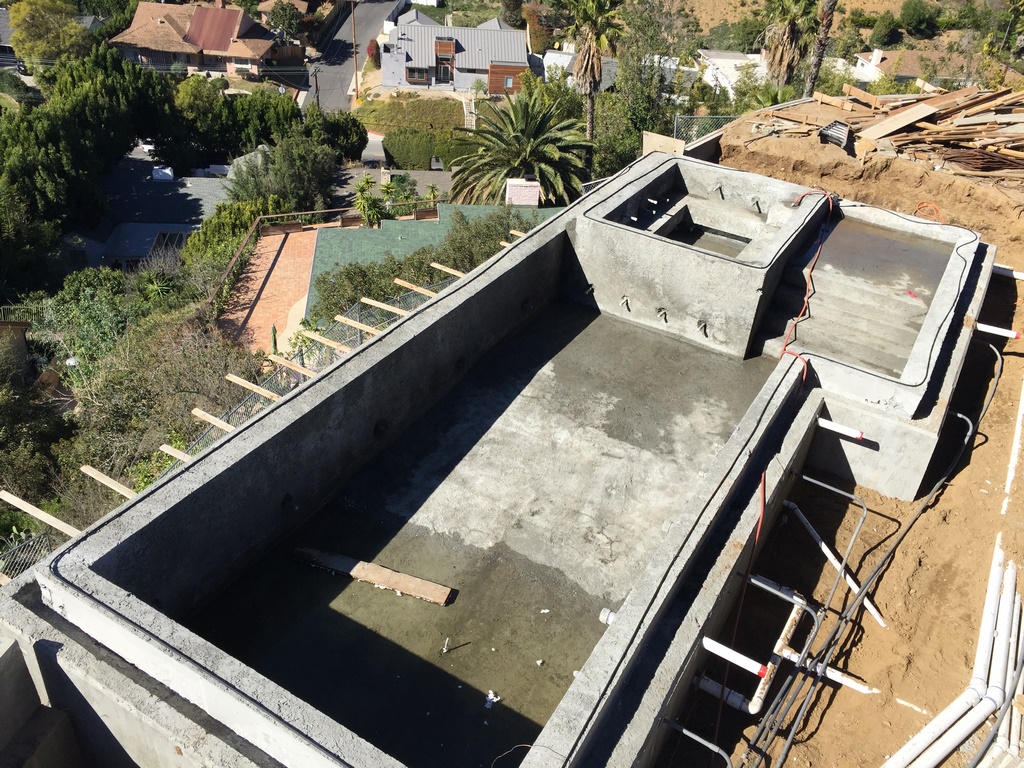 Flipping forward, our crews also did all they could to prepare for and simplify the surface-preparation process knowing that an all-star like Jimmy Reed would be following us on site. For this project, he and I started working together early on, figuring out the details to ensure the project’s visual ambitions.

This definitely came into play as we shaped the shell: It’s not possible to shoot and trim shotcrete in such a way that there’s no need for surface preparation, but we did our best to hold to tight tolerances in order to avoid any significant need to add or remove material to make surfaces plumb and true within the project’s elaborate dimensional specifications.

As we see it, this is a matter of professional consideration we always apply in crafting shells – but when we’re working as part of a team such as this one, our focus gets a bit sharper because we know the results will be spectacular.

Dave Penton is the founder and president of Fluid Dynamics Pool & Spa in Fullerton, Calif. A specialist in residential watershape construction in and around Los Angeles and Orange counties, he is known for his attention to detail for innovation with mechanical systems. A graduate of Genesis University and a master in the Society of Watershape Designers, he is now a Genesis instructor.