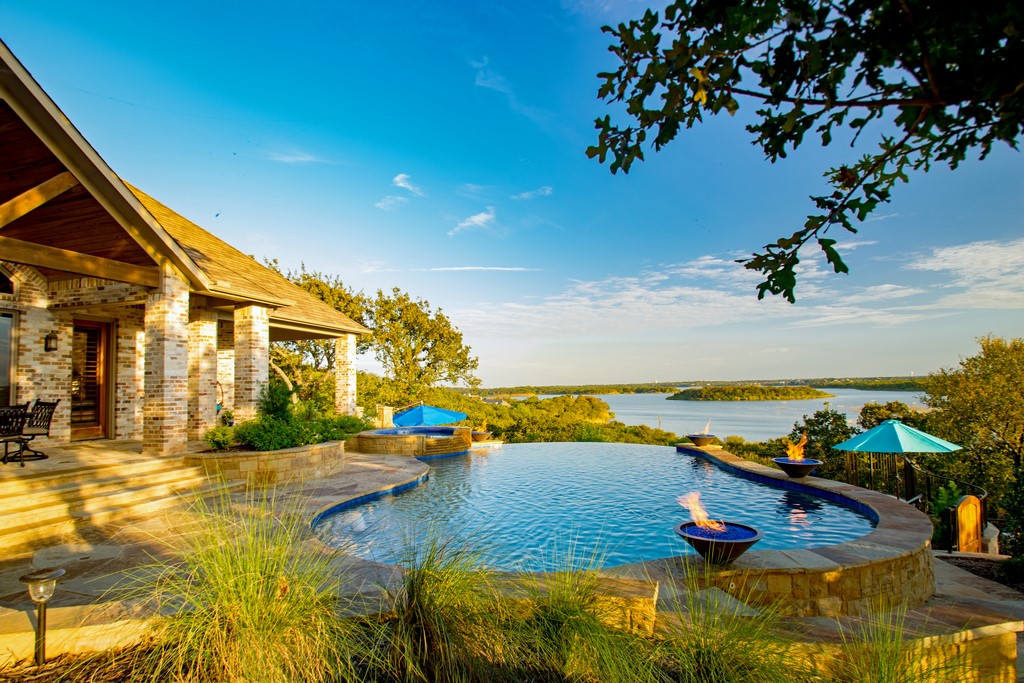 One of the important lessons I learned as a young watershaper is that I am not a surveyor.

Working on a pool design in the hills south of California’s Napa Valley many, many years ago, I found myself on a sloping lot, broke out my line level and figured I could, with some patience and care, map all of the relevant elevations and develop a suitable design based on my observations of the contours.

As it turned out, I was off by a couple feet in a few key areas, and making things work with the shell ended up costing much more than I had projected. It was awful enough that I have never forgotten the experience and, ever since, have frequently had my clients call in professional surveyors to map sites where I perceive the need.

That need may be driven by difficult access, heavy underbrush or unmanageably rough terrain. It’s also triggered when, as in the project described here, there’s a cross slope in which the hill not only drops down from the back of the home, but also drops perpendicularly across the site, in this case from right to left by about a dozen feet.

The home under discussion is located in the Dallas area on a lot rising about 80 feet above Lewisville Lake, which was crafted many years ago by the Army Corps of Engineers as part of the area’s flood-control infrastructure. When the water supply is good, as it has been lately, the lake offers beautiful views across the water. In times of drought, by contrast, the lake becomes a mud flat – but even then, the views from on high still have their charms.

The home had been built and was first occupied before the Great Recession a few years back. It had fallen into foreclosure and was empty for more than a year when the current owners purchased it and, a year or two thereafter, called Claffey Pools (Southlake, Texas) to discuss the possibility of upgrading their sloping backyard with a swimming pool.

I met with the clients and their four children, who ranged in age from about six to sixteen, saw the cross-sloped site and asked them to have the property surveyed to help me with what would be some fairly complex design work. They did so, and I soon received a site map that was much less than what I’d requested.

I had to laugh despite the frustration, because the survey company said the site’s contours had made the usual assessment difficult, so they’d done some extrapolating – exactly the sort of pitfall I’d fallen into all those years ago and precisely the result I’d wanted to avoid. After some tense exchanges, they agreed to come back on site and do a proper job – and I was soon on my way. 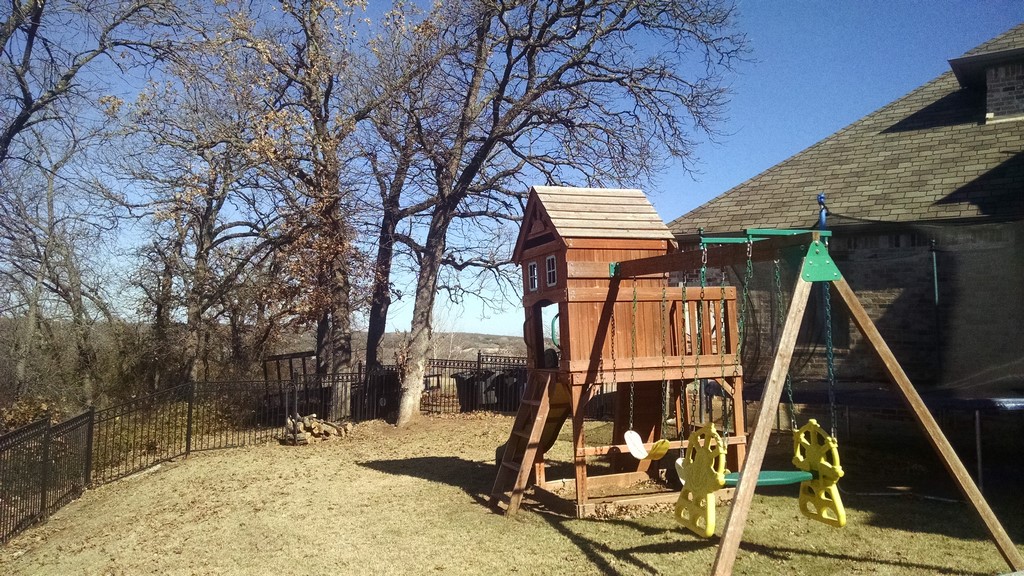 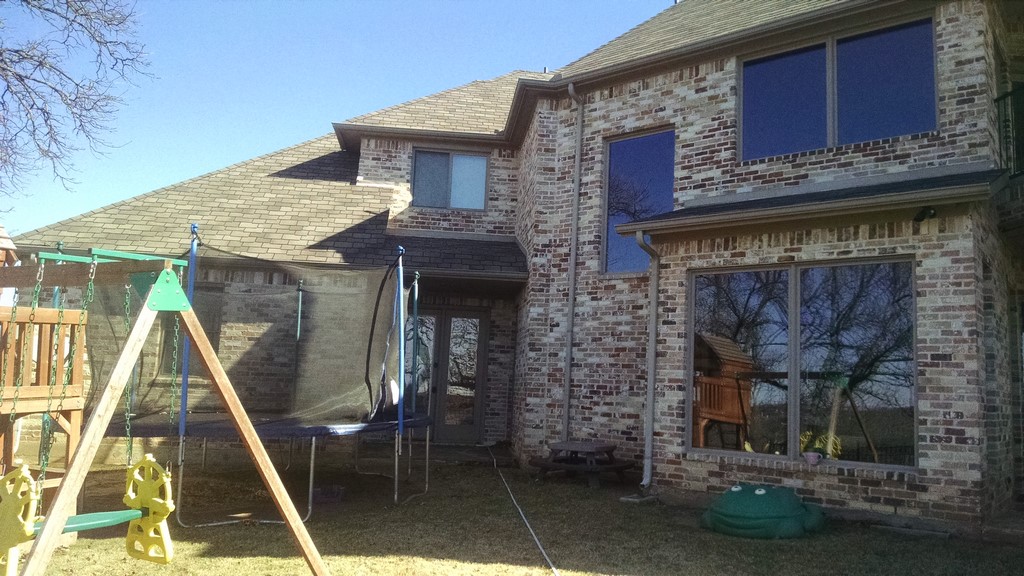 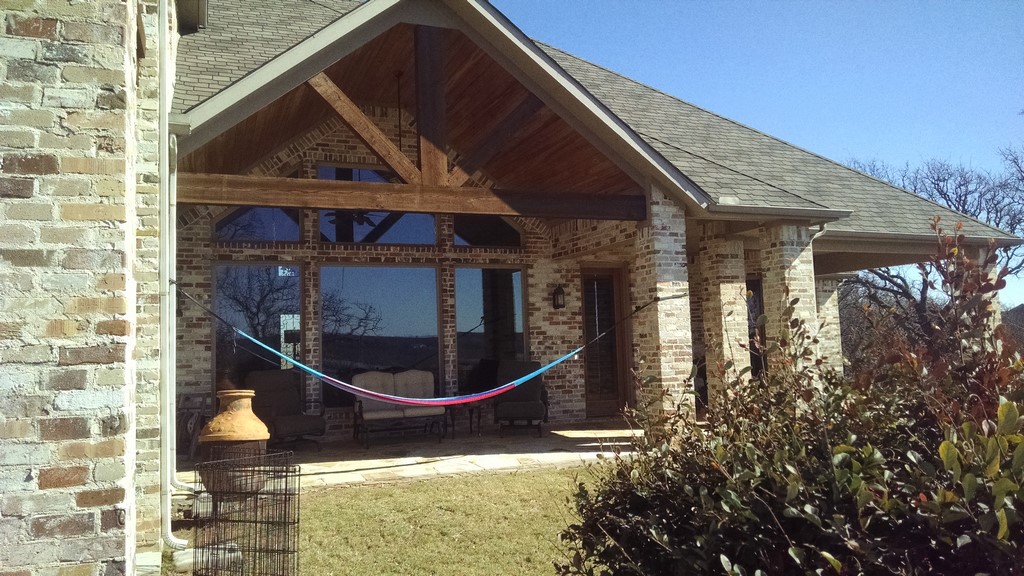 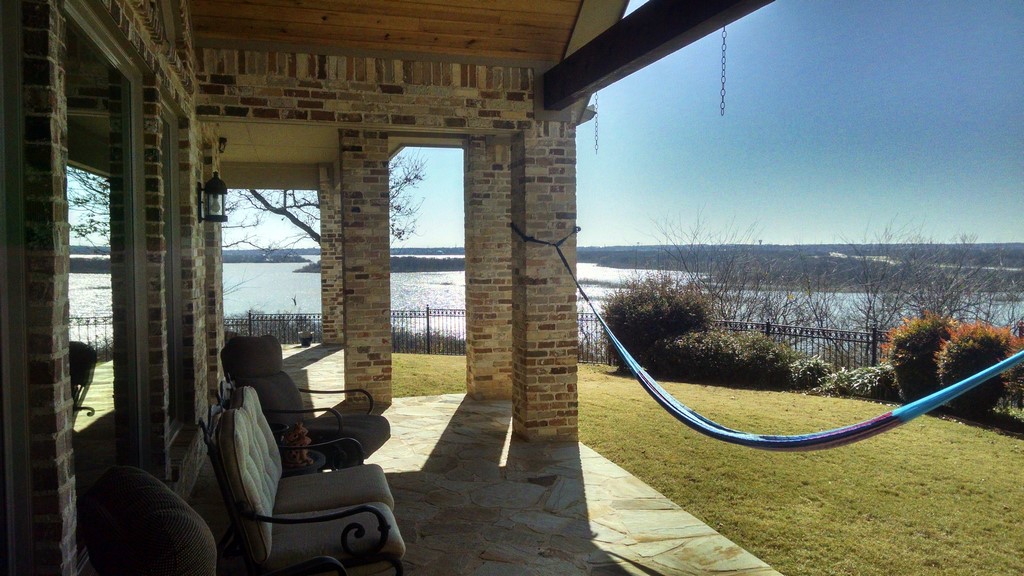 I base my designs on the clients’ desires as well as the site’s character and the home’s architecture, but in this case, the homeowners really didn’t have many ideas about what could be done, probably because the slope kept them from visualizing all the fun they’d eventually be having. Long story short, I asked lots of questions and sent them to my web site to review possibilities; they came back with some likes and dislikes but pretty much left things up to me – and the result was a full-featured design they loved.

Just one problem: They wanted to pay cash for the poolscape when the time came, and it would be a while before they’d be ready to move forward. Would I be so kind as to call back in a year or so?

I’ve been down that road a time or three and nothing much had ever come of it, but I marked my calendar and called them as requested. No, they still weren’t ready to go, but they wanted me to call back again in six months to see where things stood. This time, I didn’t mark my calendar.

Seven months passed and he called me, letting me know that they were all set and wanted to start – but because I hadn’t called they figured we weren’t interested any longer. I scrambled a bit, made amends for my misstep and managed to get the wheels turning again.

We prepared construction documents, revised parts of the bid to reflect nearly two years of inflation and were ready to submit the plans for review by local building authorities. It was then that we hit a wall – literally.

Given the slope, I’d included a tall, engineered retaining wall to create a stable platform for the poolscape. Nope, said the inspector: We don’t allow retaining walls to be more than four feet tall in our town. But these are engineered walls, I said, set up on piers and fully capable of performing the required function. Nope, he said, four feet’s the limit.

This made no sense to me, especially as I drove through the area and saw new houses, clearly less than a year old, with retaining walls nearly as tall as the one I’d proposed. What about those, I asked. Well, he said, they got variances. Well, I said, I’d like one, too. Nope, he said: Four feet tops. Revise your plans or forget about getting a permit.

So after wondering how I’d managed to become such a burr in this guy’s saddle, I went back to the drawing board and revamped the plans to include a set of terraces, support of which never involved a wall more than four feet tall. The changes had bump-along consequences, including a reduction in the size of the pool area and some sacrifices in the square footage of the lower decks. But now all was acceptable to the authorities. 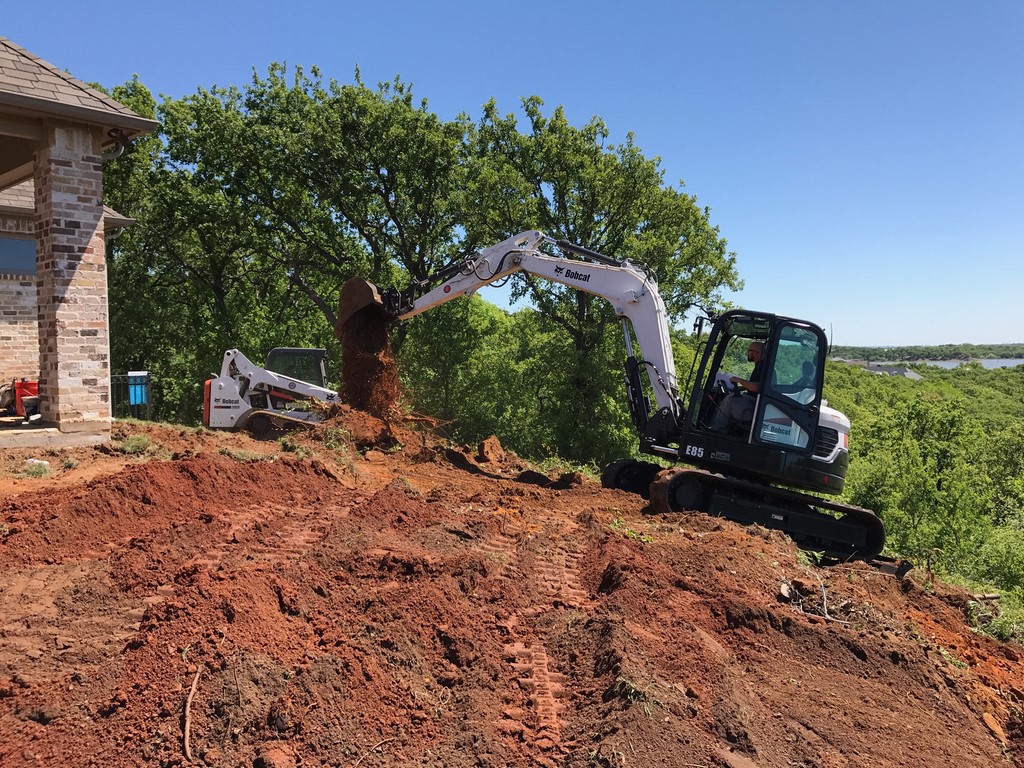 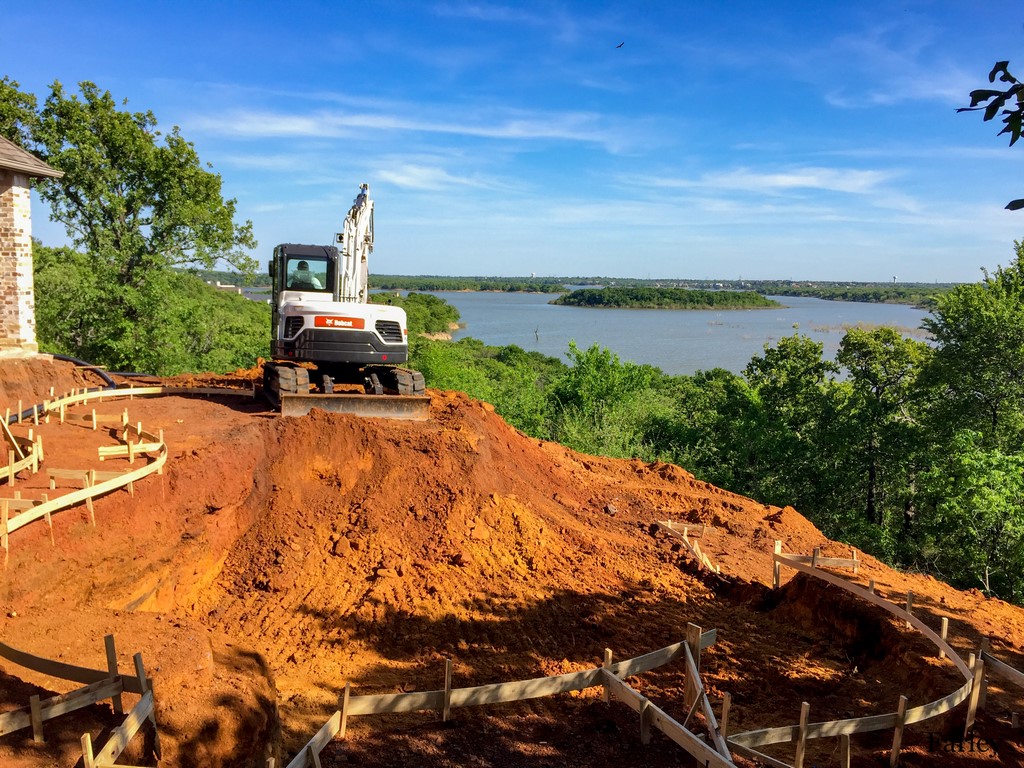 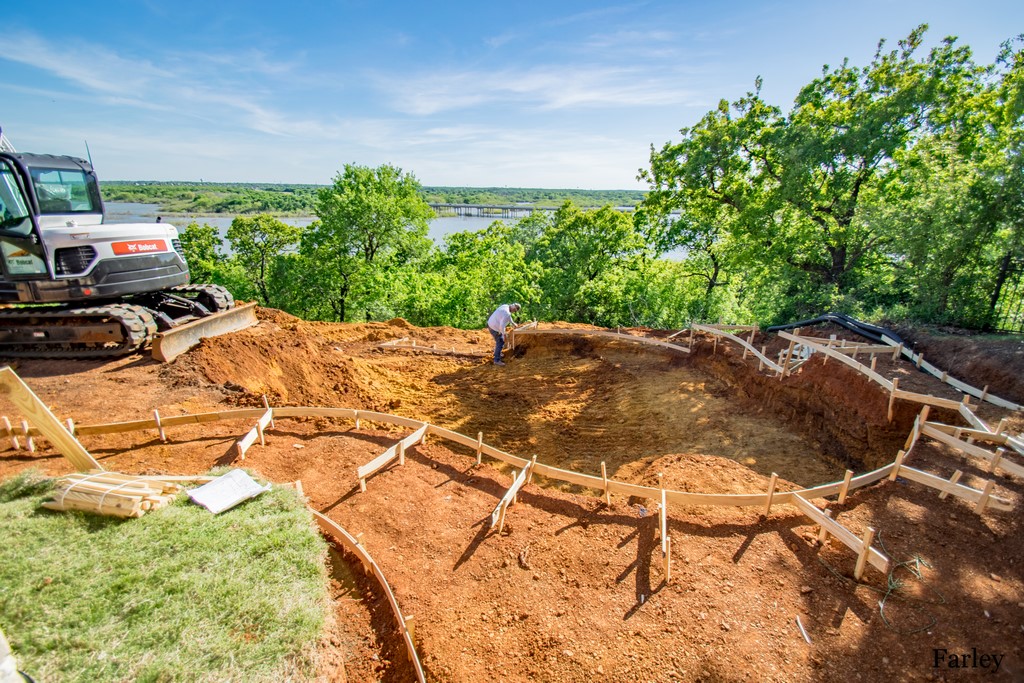 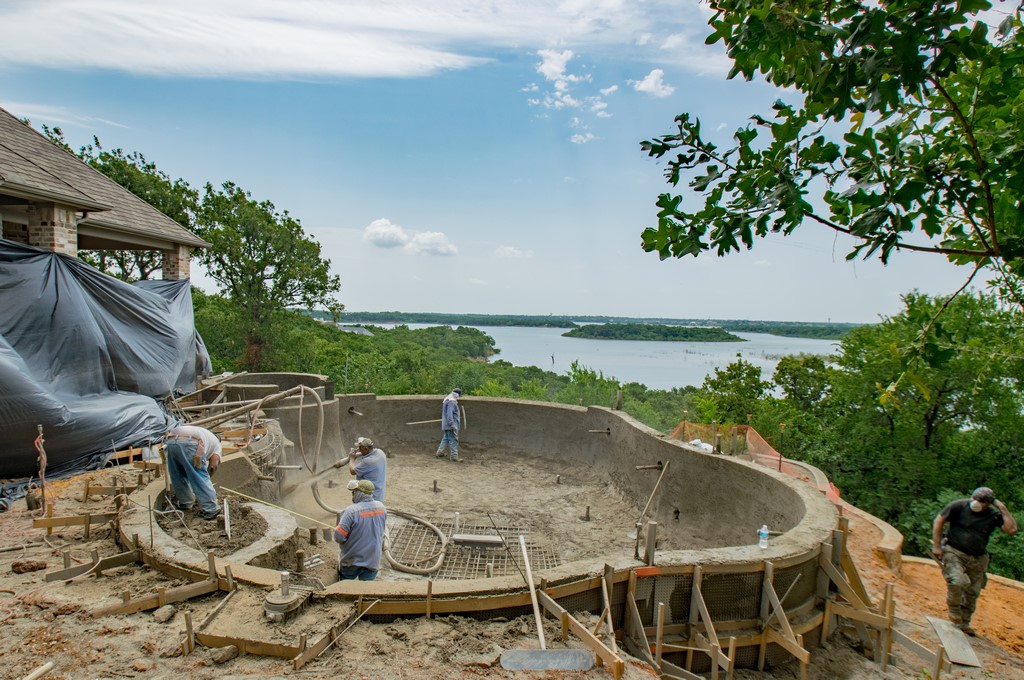 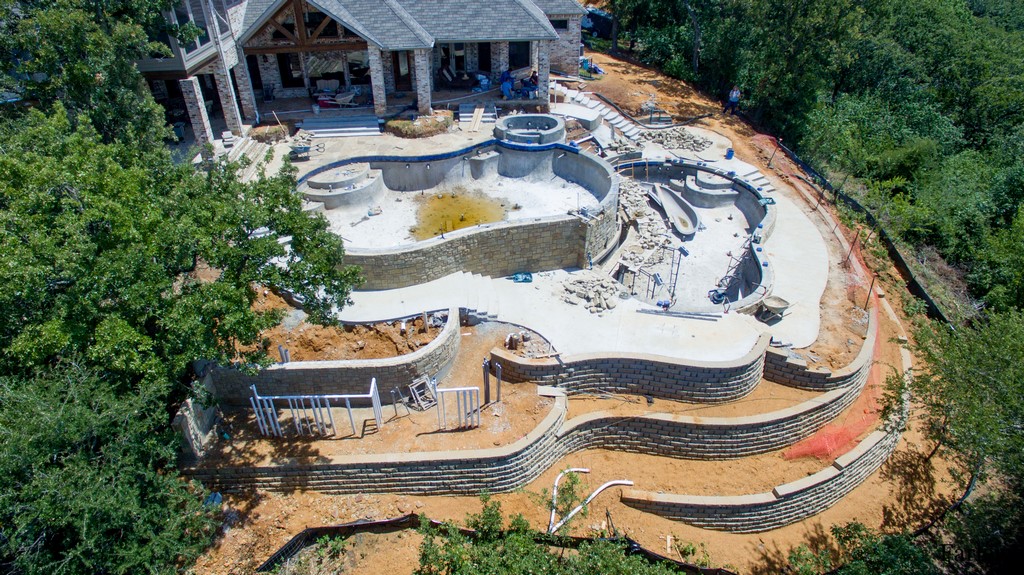 Unfortunately, however, all of the back and forth had eaten up time, so our hopes of having the pool ready by Memorial Day began to look more like a Labor Day event. The disappointed clients were assured by Charlie Claffey that we would do our best. This meant something of a fire drill within the company, with us pulling in crews from multiple other jobs and causing delays elsewhere. But we were finally good to go – and moved along rapidly.

Access to the site was fairly easy, but there was a large tree we had to protect alongside our path. We did so by laying in about four feet of fill as a temporary buffer to protect the tree’s roots from compaction, and soon the excavation started. The soil was exactly what we expected once we reached beneath the spoils generated when the house was built: sandy loam with good drainage over a large outcrop of bedrock.

Once the area was encompassed by the retaining-wall system, we had no concerns about the stability of the pool’s base and were able to build it without any piers or keys. After the digging was done, the construction process was detailed but fairly routine. 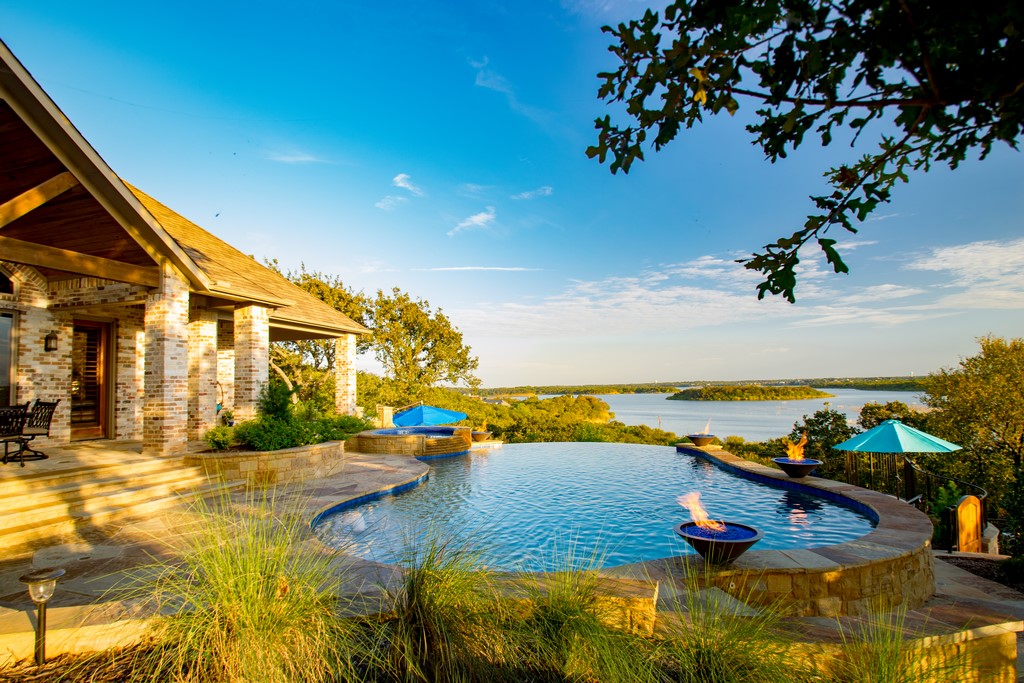 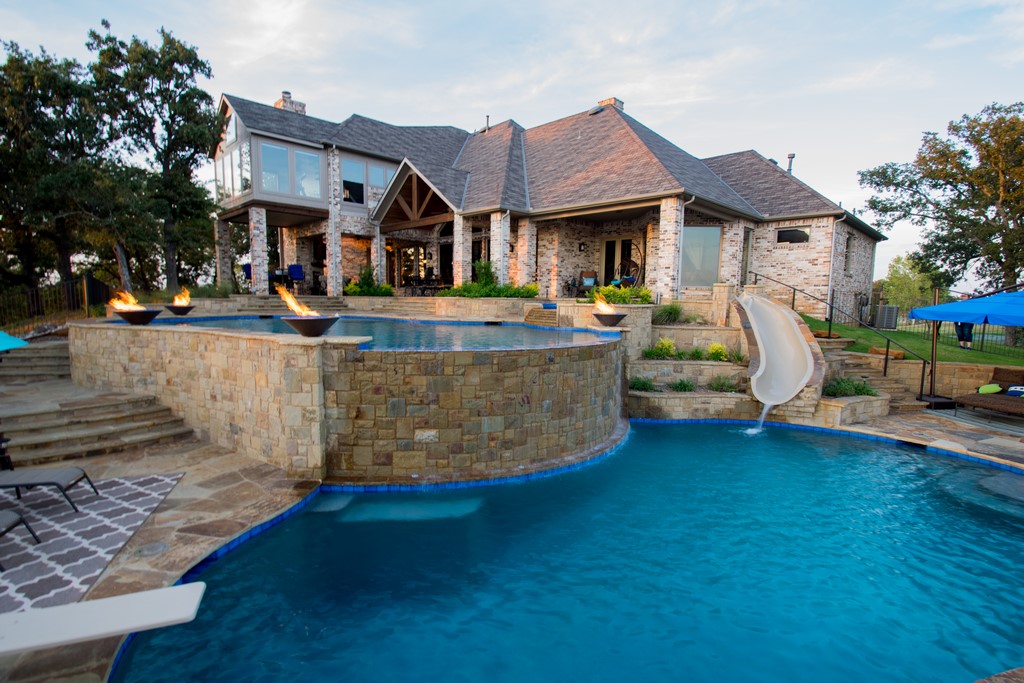 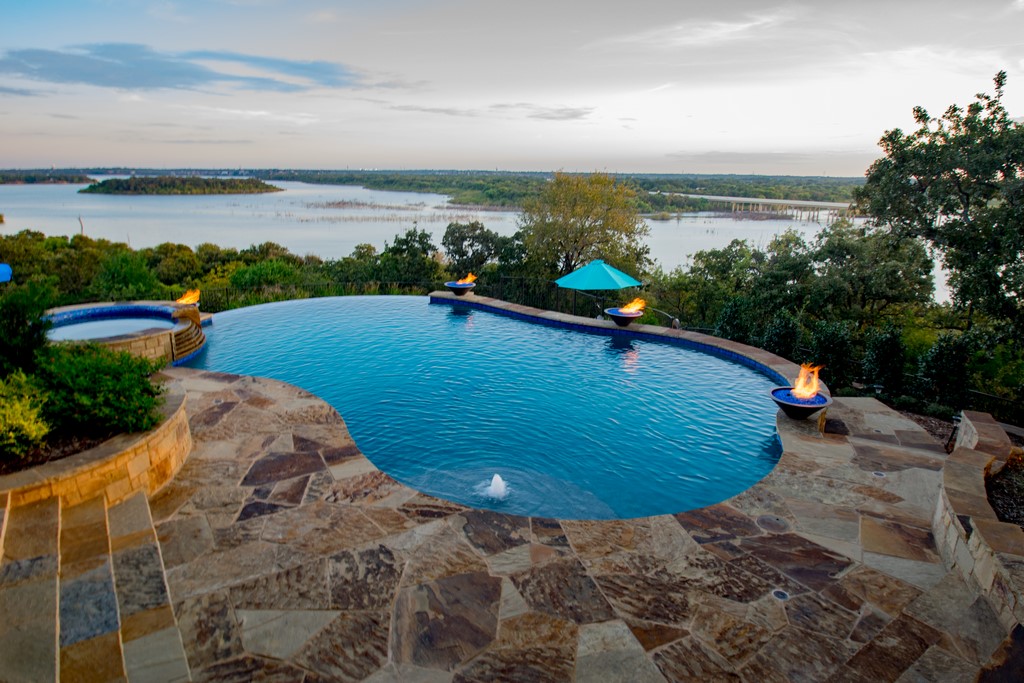 The result is a two-pool system, with a shallow upper pool meant for relaxation and young children and the occasional volleyball match or basketball game. This pool flows over a vanishing edge to a deeper pool meant for diving and vigorous play for the older kids. The lower pool’s hopper slopes up to a shallower area beneath a slide. The upper pool includes a small lounging area as well as an attached spa.

The fence, which is needed to keep coyotes at bay, seemed an excessive visual intrusion at first, but we know the landscaping will eventually mask its presence and that the family will soon be able to enjoy looking over the vanishing edge and out across a bit of greenery to the lake below.

I do designs for Claffey Pools, but I’ve had long experience on the construction side of things, too. When I first started with the company several years ago, I would show up on a job site from time to time to see how things were going, and I’d often catch a bit of attitude from project managers who were not accustomed to having designers check what was happening.

I’ve persisted, however, and through the years I’ve become an accepted participant in the process, answering questions, very occasionally offering guidance and, in some cases, insisting that things be done per plan, despite any issues the team might have run into along the way. It’s become a good balance.

With this project, the short timeline increased the pressure to get things done correctly, first time, every time. The fact that I live in the area made it easy for me to visit the site on my way to and from the office, so I was around much more than usual.

Things had been so well planned that my on-site contributions were minimal, except in one case: The grout used on a section of the deck was a poor match for the rest of the material used on site, so I had the crew remove and replace it with appropriate material. It was a bit picky on my part, but I knew it would bother the clients if they’d noticed it (which I always have to assume they will).

Beyond that, the on-site efforts were so focused and well executed that the project ran smoothly from start to finish. The clients love the result, and I learned a secondary lesson: Not even professional surveyors get it right if they make assumptions and take shortcuts based on those assumptions. As with so many other elements of complex projects, it was additional affirmation for me that vigilant supervision is essential, especially when working on challenging terrain!