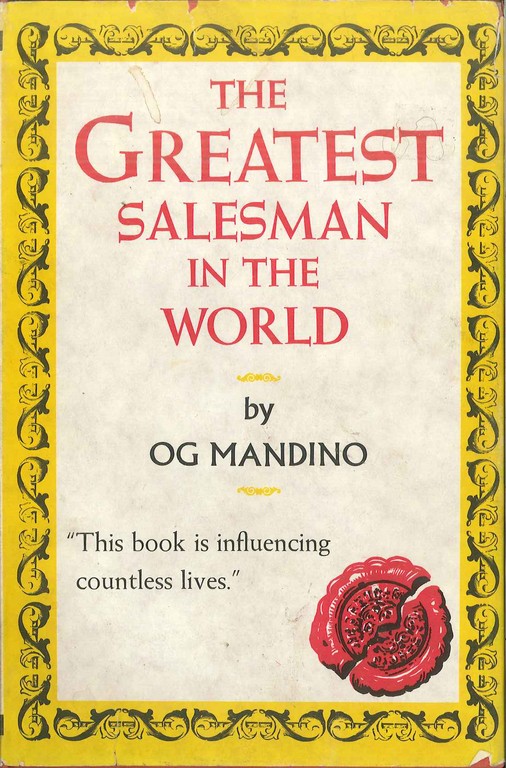 When times are tough, I sometimes find it useful to think about the things in life that I’m able to control while giving less thought to those I can’t. The plain fact is, no matter how troubling the news is or how tough the economy makes our working lives, nothing can ruin our positive attitude if we don’t let it.

In other words and no matter what, we are always in charge of how we greet the world.

That’s a point I’ve had confirmed by re-reading The Greatest Salesman in the World by Og Mandino (Frederick Fell Publishing, 1964). To my mind, there are few books that truly warrant the label “classic,” and this is one of those masterpieces. I regard it among the most inspiring and life-altering books I’ve ever read – and I’m apparently not alone: It has been reprinted several times and is still widely available.

I first encountered it as a teenage Boy Scout, just after I won a contest by selling the most tickets to a special Scout-sponsored event. Seeing that I had a knack for sales, one of my troop leaders suggested that I read Mandino’s book. What I found was a source of inspiration that extended well beyond the art of sales.

I read the book again in college as part of a class that that focused entirely on the book’s teachings. It was a fascinating course, taught by an instructor who literally could recite the entire text, word for word. I’m now re-reading it again with my 12-year-old son, who seems to be gleaning gems of wisdom from it as well.

The book tells the story of a wealthy trader, Hafid, who lived in the 1st Century A.D. Nearing the end of his life, he recounts his career and how he rose from humble origins and eventually came to operate the world’s most succesful trade caravan.

The book’s 108 pages are organized as 10 “scrolls,” each covering a different life-affirming concept or basic human trait. The suggestion is that the reader should tackle each scroll over and over and over again for a month before moving on to the next, making the absorption of the text an exercise that spans a full 10 months. (You don’t have to read it that way, of course, but having done it that way myself, I see value in the repetition.)

For the most part, the scrolls affirm things we already know: the power of persistence, for example, or the benefits of laughter or, perhaps most relevant these days, the importance of greeting each day with a smile. The writing is so convincing and compelling that, amazingly, revisiting the material never becomes boring. Indeed, the messages seem to gain strength and amplification as you move along.

Having read it at three distinct points in my life, I’m further amazed at how Mandino’s teachings have resonated with me no matter how old I happened to be or where I found myself on my life’s journey. I won’t go into specifics here, because any general recounting would betray the book’s genius. But I will say this: If you are finding it difficult to keep your head up these days, this slim volume may be just the tonic you need.

Speaking for myself, I know it’s helping me greet each day with a smile!