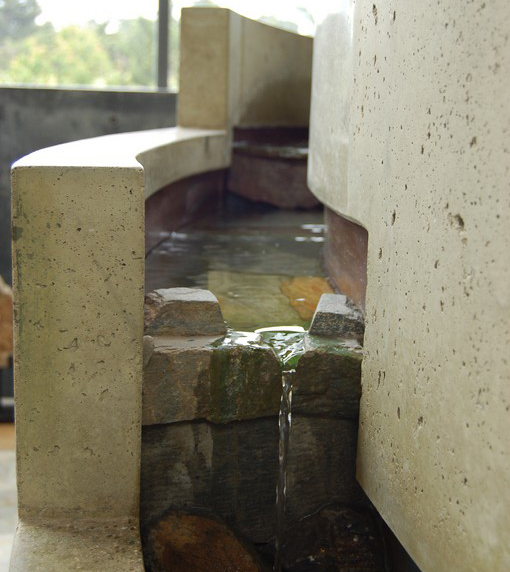 I’ve never been entirely comfortable with the term “decorative concrete.” To me, the pairing of the words has always implied that one merely applies material over a substrate in the way a baker might apply icing to decorate a cake. Instead, I see concrete as inherently profound. More than appliqué, it is a medium that has long been used functionally as well as expressively.

In my own case, I feel far more creatively engaged in my work when I merge my thinking about those dual potentials of function and art. Historically, in fact, I believe that when the two become an inseparable one, we recognize and celebrate these works as rising to the level of great design.

No longer just rooms full of cabinet boxes topped with thin slabs ofgranite or fabricated materials, kitchens were now liberated to function and be expressive when the authenticity and mass of concrete was deftly combined with stainless steel, wood, and other materials appropriate to such spaces. 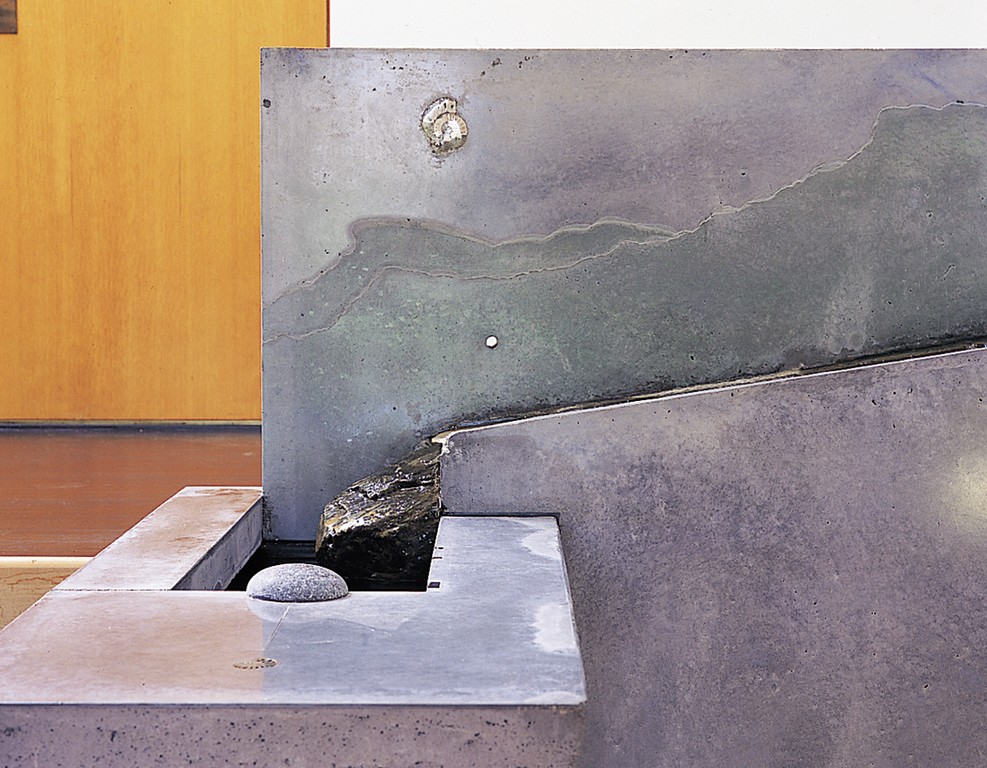 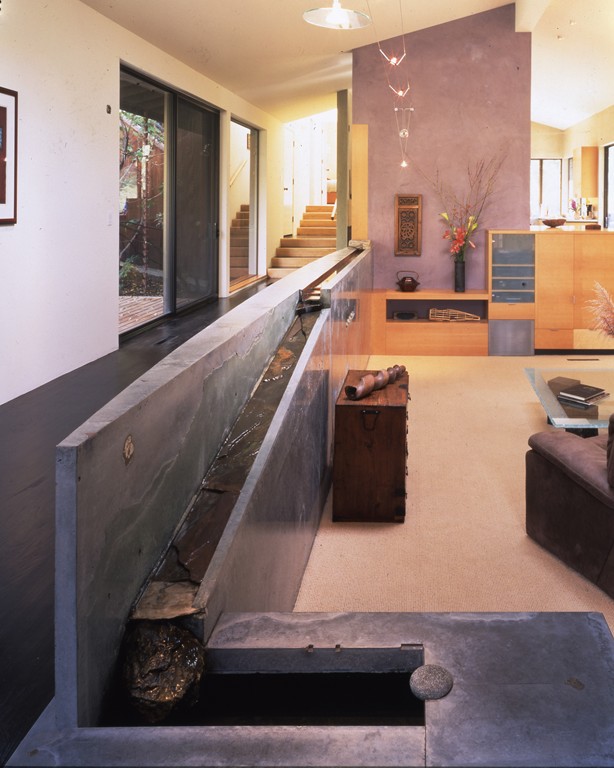 I have been very gratified that these explorations have inspired lots of other professionals and artists to begin pursuing cementitious visions that are carrying many of us well beyond the “decorative” label.

I appreciate the fact that we need to categorize what we do for purposes of defining, discussing and marketing a product, and so I’ve made my peace with the term “decorative concrete.” At the same time, however, I’ve sought a deeper understanding of this medium and have studied its history and application in order to put it to better use in the here and now.

Back in the early 20th Century, for example, designers came up with all sorts of amazing applications of concrete, placing it on the façades of buildings and using it in the landscape. At that time, nobody thought of concrete as just a decorative material, but instead saw it as a practical structural alternative to stone. Thus, concrete was molded to create balustrades, arches, finials and a host of other details previously associated with carved stone.

In other words, concrete was used dynamically as both a design tool and a building tool, and the two areas were seamlessly intertwined. In the generations since, concrete has become ubiquitous (it is, in fact, the most used of all manmade materials) and has found practical applications within just about every 20th-century design style. 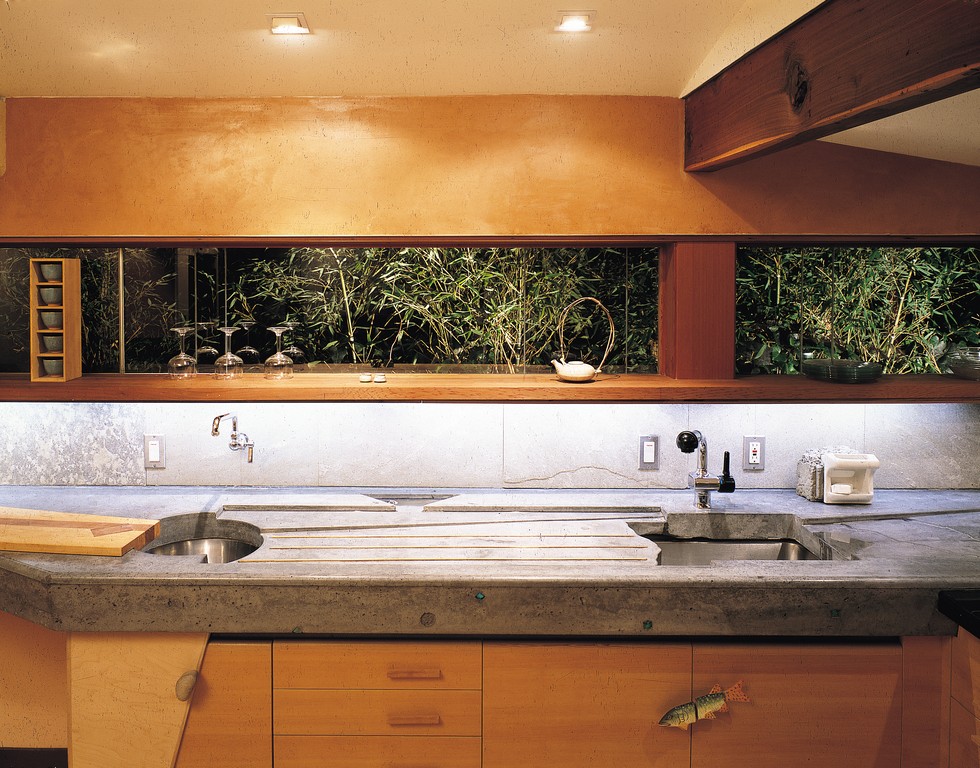 But it truly began to emerge as a distinctive, distinguishing element in Modernist or Contemporary designs, where structural features are often considered aesthetic. Just as exposed timbers are used to make bold, aesthetic statements in Craftsman-style buildings, Modernist designs turn buildings inside out and use steel, glass and concrete as aesthetic elements, often celebrating structure by exposing concrete rather than hiding it.

Today, another framework for concrete’s expressive potential comes in the form of themed or literal designs, with artificial landscape rock and stamped-stone hardscape being the most common of these applications. I recognize that this has resulted in some fun results, but I still see them as representing only a small slice of the concrete design pie’s possibilities. Indeed, because concrete has the ability to be formed or molded to imitate almostanything, I tell students who attend my seminars on the creative use of concrete, “Don’t imitate nature, be inspired by nature.” I say this because, with very few exceptions, when we focus on mirroring the profound beauty of nature using concrete or any other material, we’re doomed to a pale reflection: Nature’s organic designs and complex synergies are simply beyond our reach. 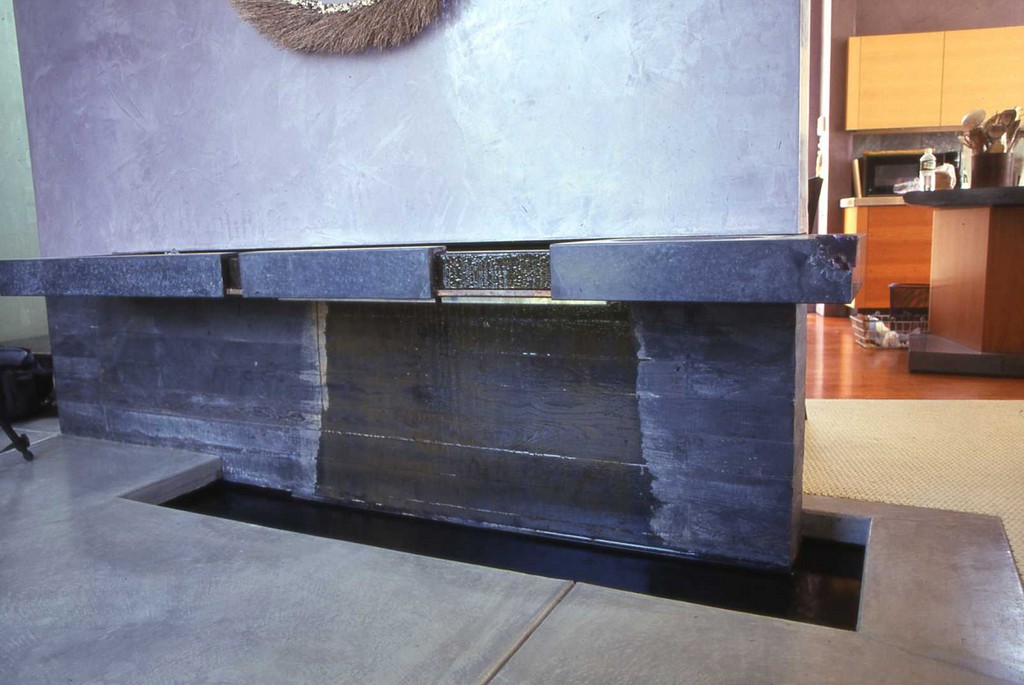 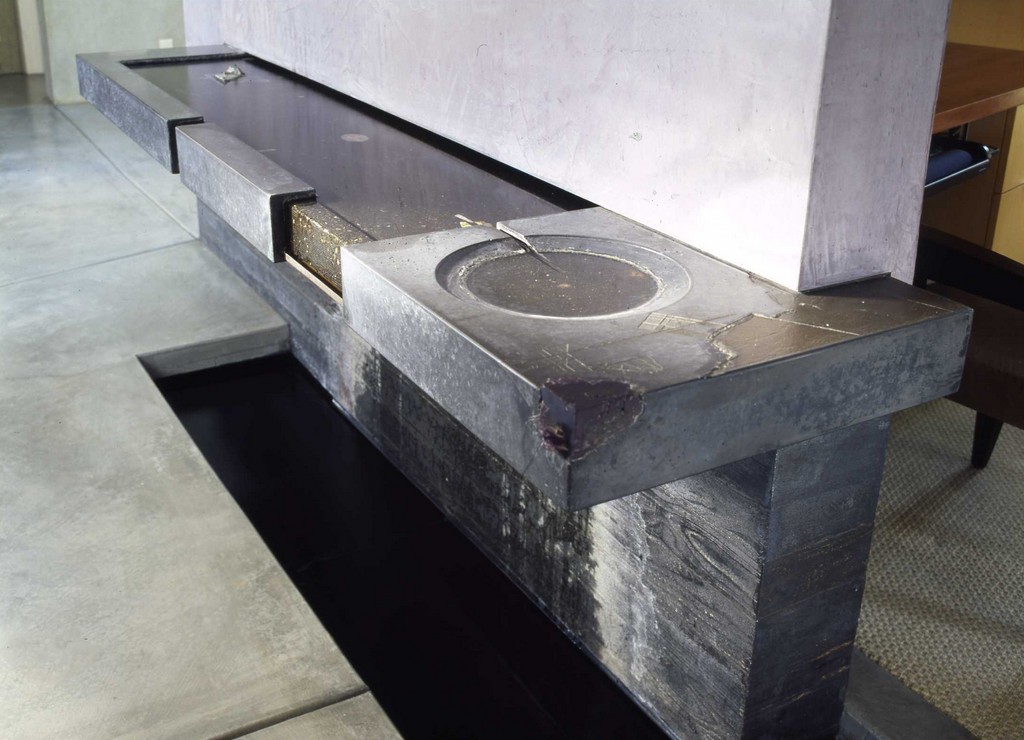 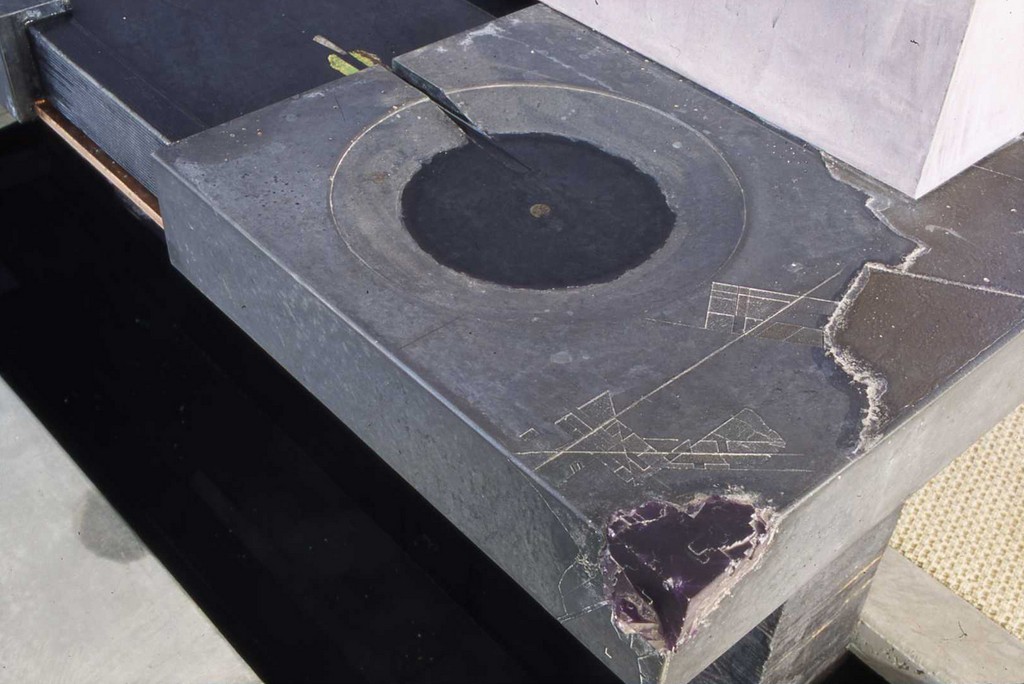 It is my humble opinion that we humans, as rather arrogant creatures, constantly attempt to improve what we fail to appreciate as being quite perfect as is. As I see it, there is no simple way, using modern materials and production techniques, to recreate in days or weeks the work that nature takes eons to shape.

So when I see literal representations of cobblestone, flagstone or geological formations in concrete, I’m always aware of the ways the results don’t quite look natural – and that it takes near-heroic gymnastics to reproduce the most commonplace natural effects, such as shoreline sand, a creek bed or a stream’s rapids. And there’s the rub: Just because we can doesn’t necessarily mean we should.

It’s in looking beyond the literal, in my opinion, that we begin to see possibilities and create effects that haven’t been seen before. Indeed, there is profound beauty to be discovered in the manmade when we translate what we see into work that forges bonds between built and natural environments. 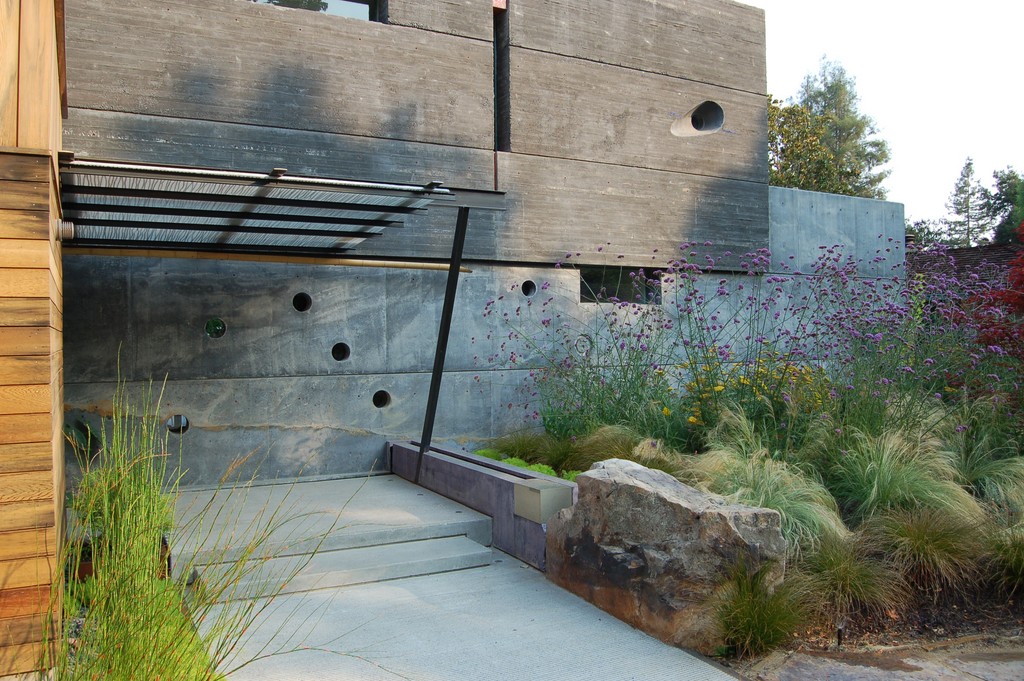 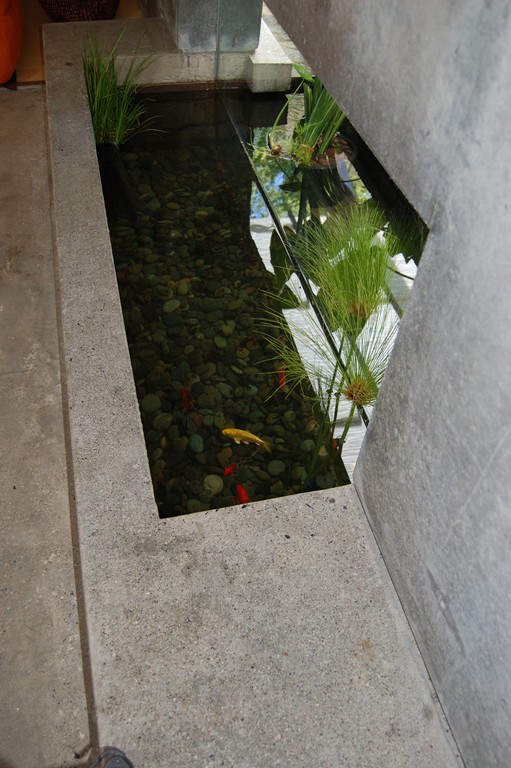 Recently, for example, fabric-formed concrete, new lightweight types of fiber-reinforced concrete, self-compacting concrete, recycled/repurposed concrete-mix designs and many other exciting technical advances have been evolving rapidly in our industry. By experimenting with and taking advantage of these innovations, expressive concrete can further dissolve the boundaries between the structural and the aesthetic – and can even obscure distinctions between what is natural and what is manmade.
Happily, a growing number of today’s designers, artists and craftspeople are getting more and more involved with concrete’s new technologies and expressive potential. Just a brief tour of Internet sites shows that amazing things are being done – and what I love most about what I see is that lots of it defies being put into easy categories.

Take my own work as an example: It would be easy to file it in the Modernist category, but I don’t see it that way because my designs step away from Modernism’s tenets of pure patterns and geometry and display a naturalistic bent that in some ways conflicts with the Modernists’ sense of boundary.

Instead, I like to think of my work as trying to seek a balance between innovation and convention. I strive for (but don’t always achieve) timelessness – work that is as original as can be when I produce it – and believe that, more than any other material available to designers, artists and craftspeople, concrete provides a broad set of creative options and allows me to move in any number of entirely new and unique directions.

And as is true of most other arts and crafts, the creative possibilities with concrete expand as you become more familiar with the techniques required to control the material’s aesthetic and technical potential. Part of that is learning how to control and manipulate shapes, which is where forming comes into the picture. 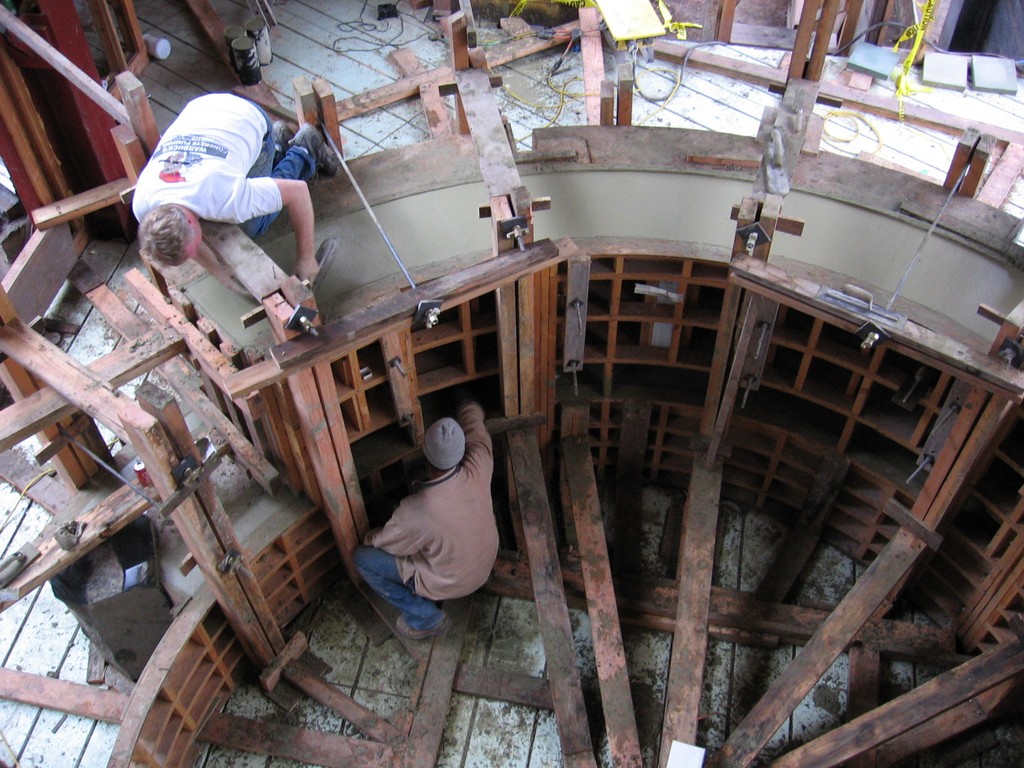 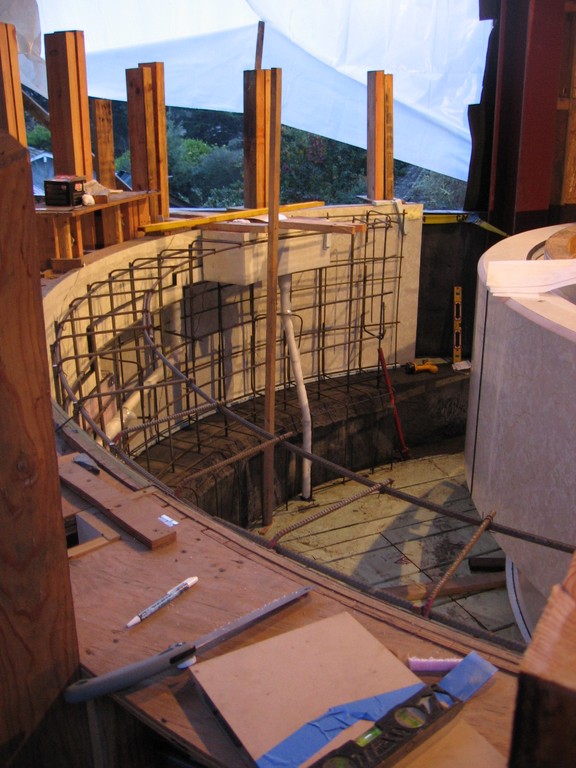 The forming can be something as simple as a box, but it can also involve sets of complex shapes that can challenge even skilled cabinetmakers. (It is because of the extensive mold-making required to do sophisticated work that I say someone who has advanced skills in carpentry would probably have an edge over one who knows all there is to know about finishing concrete flatwork.)

As mentioned above, I started in this vein by reimagining countertops as works of artistic design in concrete. I saw how forming the mold was a step beyond the two-dimensional slab countertop into three dimansions in which I was creating sculptures in concrete. In the process, I took a fresh look at how people use countertops and, not incidentally, at the way that water moves through these working spaces beyond simply gathering in a sink. 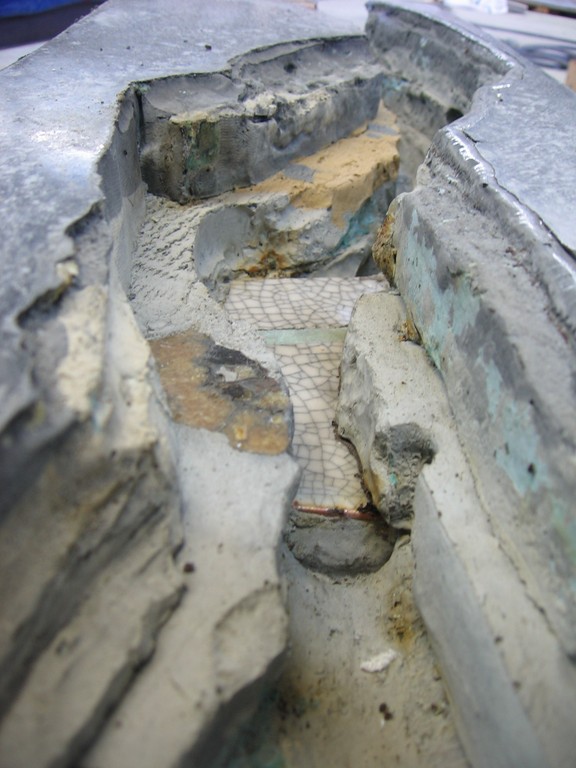 As it turned out, my work with the utilitarian details of kitchen countertops was a perfect means of demonstrating how concrete could be used as a design medium – and used with water as well. It also revealed how, in this way, ordinary objects could be transformed into works of art, and from that point onward, as they say, the sky was the limit.

One of my all-time favorite projects happens to be one of my first water-wall pieces. A poured-on-site project completed about 15 years ago, it both challenged and excited me because of its inclusion of the action of the water flow and the fact that I was bringing water indoors.

The structure is 22 feet long and features a narrow watercourse placed atop a low interior wall. The water is controlled by an electronic gate hidden under a natural stone that opens and closes, thereby creating a small, half-inch wave that quietly pulses down the narrow, copper-lined sluice every ten seconds or so before easing and gently flowing to a basin that recirculates the water.

I have always appreciated the fact that, although water can be the humblest of materials, it is also, for the designer and builder, the most humbling of materials. But when you figure out how to work with it, the effects are animated, almost mesmerizing, while the pieces that contain it can function as sculptural elements that either stand alone or can be integrated into other structures.

In this case, the waterfeature functions as a massive room divider and serves as a subtle focal point for the entire interior design. It was such a compelling effect that I adapted it for another project (completed last year) in which the same sort of water wall was executed in a curving version. (The latter project was featured in an article in the Wall Street Journal). 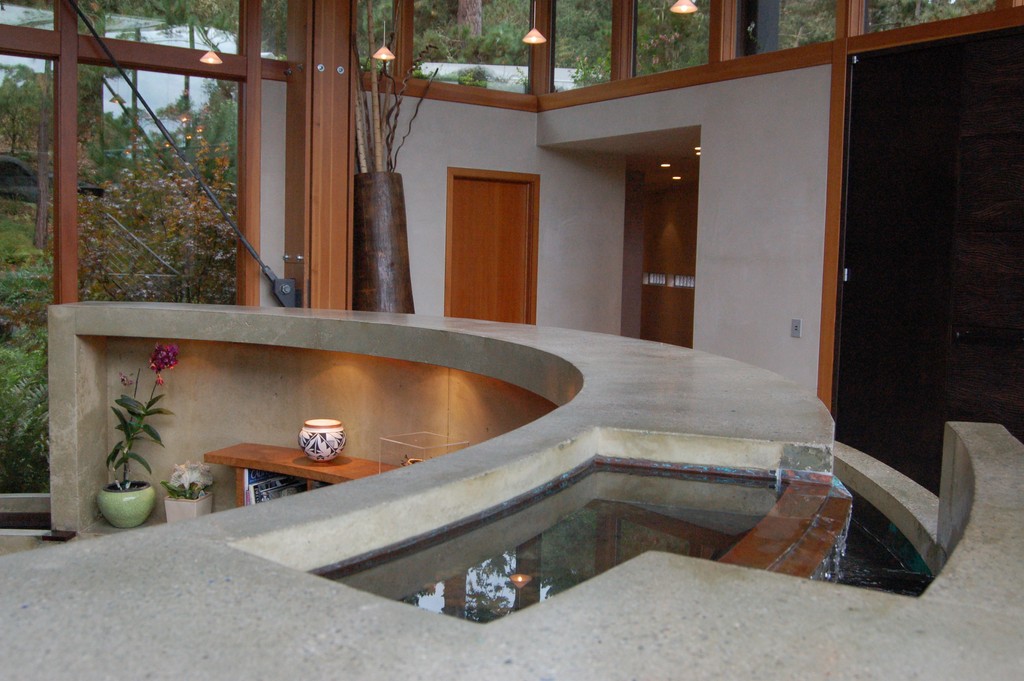 These days, I’m integrating water pieces directly into architectural designs starting in the conceptual design phase. A recent example is seen in a Northern California residence where water’s positive feng shui flows into the house via the landscape rock at the entrance. This moves to a small pool that straddles both the interior and exterior sides of the entry.

These and other projects make me proud to be part of a movement toward more creative uses of concrete, no matter what the industry surrounding what I do calls itself. I am especially proud of the fact that others have taken up the challenge and are now pushing the material to greater and greater aesthetic heights while also pushing our collective awareness of what is possible.

So far, it’s been a wonderful journey – and my conviction is that the best is yet to come.

Fu-Tung Cheng is the principal designer for Cheng Design in Berkeley, Calif., as well as a licensed general contractor. From architectural design to construction, his custom-home projects, interior design work and pioneering explorations of the potential of kitchen countertops have earned him widespread recognition, including the 2010 Athenaeum Good Green Design Award; 2010 and 2009 Builder’s Choice Merit Awards; a 2008 American Institute of Architects Honor Award; a 2007 International Interior Design Association Award; a 2004 Chicago Athenaeum Good Design Award; an Architectural Record Houses Award; and induction into the National Kitchen & Bath Hall of Fame in 2006. He has written three books published by Taunton Press – Concrete Countertops: Design, Forms and Finishes for the New Kitchen and Bath (2002), Concrete at Home (2005) and Concrete Countertops Made Simple (2008). He has also launched Cheng Concrete Products, a complete line of concrete materials; and Cheng Concrete Training, which offers courses in creative concrete design. He is also an industrial designer, having served as the creative force behind the Cheng line of sinks by Elkay; the full line of Cheng Design by Zephyr kitchen hoods; and his own Elements by Tonusa, a complete line of cabinetry and accessories.