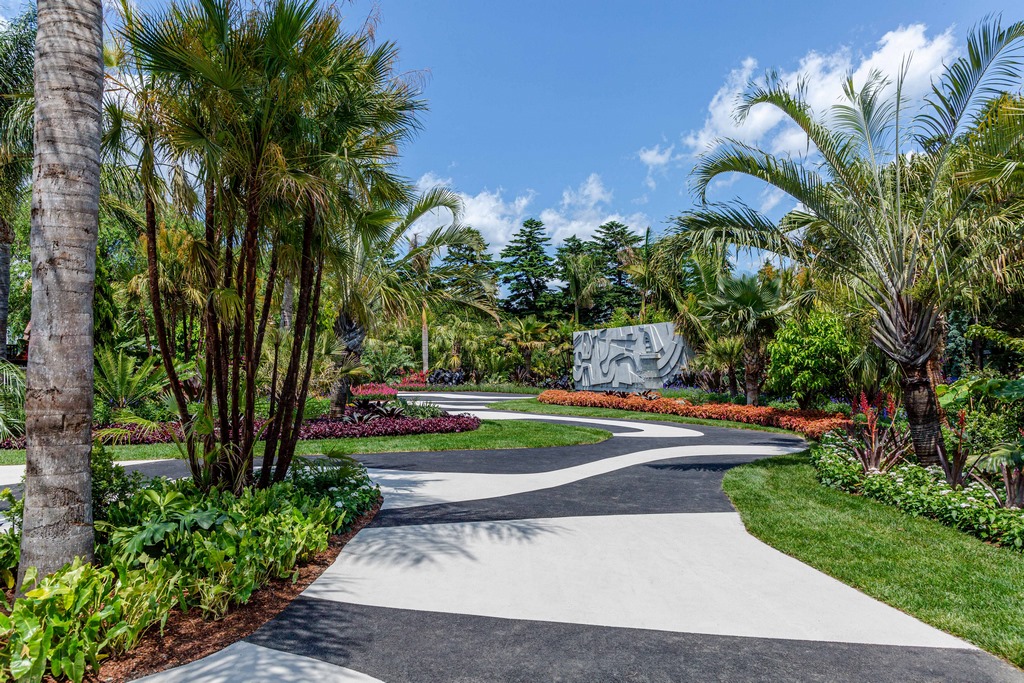 The great Brazilian landscape architect Roberto Burle Marx has been part of my consciousness for many years. I first heard of him in 1991, when a friend who’d seen an exhibition about his work at the Museum of Modern Art in New York gave it a rave review. At the time, however, it was mostly his unusual name that stuck in mind.

Then came 2007, when WaterShapes published an article by Raymond Jungles that recounted his experience in working with Burle Marx in Brazil and fully opened my eyes to the work of a true genius – an environmental artist whose fluency in the language of plants, movement, scale, shapes, elevations, vantage points, concrete, water and managing human interactions with built environments simply blew my mind.

Flash forward to 2019, when I began hearing about an exhibition being prepared for the New York Botanical Garden that was to feature not only a tribute to the plants and landscapes of Burle Marx: It was also to include examples of his paintings and drawings and set a broader context for his life’s work, including his determined advocacy for Brazilian flora and protection of the habitats in which it thrives.

When the NYBG event was announced, I had no hole in my schedule that would let me travel to see it. But as time passed, I began considering this as a bucket-list-level opportunity, juggled my calendar and traveled to the Bronx about a week before the show closed in September.

For me, there are three stories here. The first is about the work of landscape architect/Burle Marx associate Raymond Jungles as guest designer for the exhibition. The second has to do with my daughter, Leah, who works for the fabrication studio that made the show’s centerpiece water wall. And the third is about Roberto Burle Marx himself and his place in the pantheon of modern artists.

NYBG couldn’t have found a better witness to the style of Burle Marx than Raymond Jungles (Raymond Jungles, Inc., Miami, Fla.), whose early encounters with the Brazilian designer’s work effectively changed his life and helped him set his professional goals and ambitions.

The full story of their relationship and of the numerous trips and great amount of time Jungles spent working with Burle Marx in Brazil is reported in the first of Jungles’ WaterShapes articles, “A Master at Work” (click here), so I won’t go into detail in this Travelogue. Suffice it to say they built a productive relationship through the years and that, in time, Burle Marx accepted the young man as a colleague rather than a protégé.

This is why it was so wise of NYBG to call Jungles in as the exhibition’s guest designer: If the event’s organizers wanted to find someone capable of channeling the vision, design principles and basic sensibilities of a man who passed away in 1994, they made the best possible choice by getting Jungles involved. 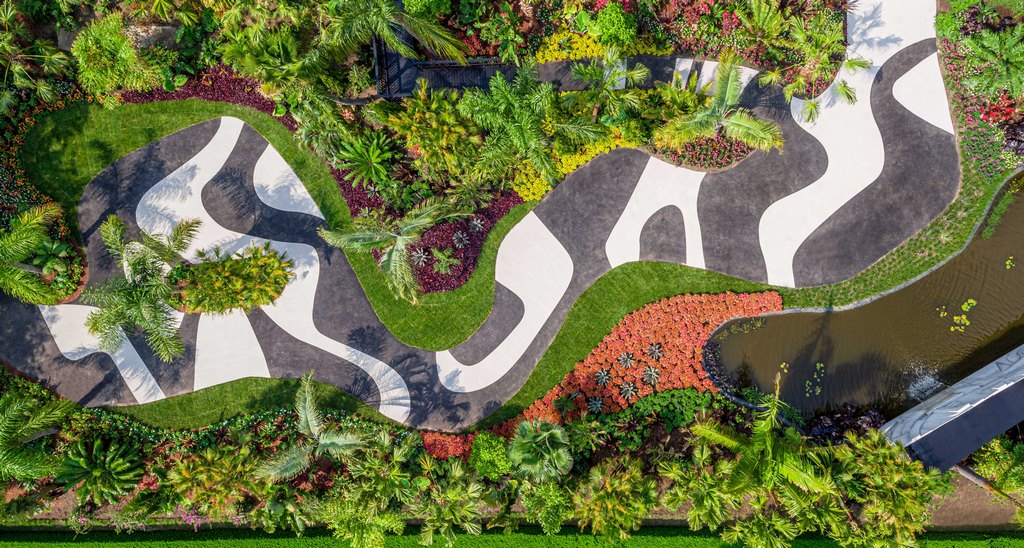 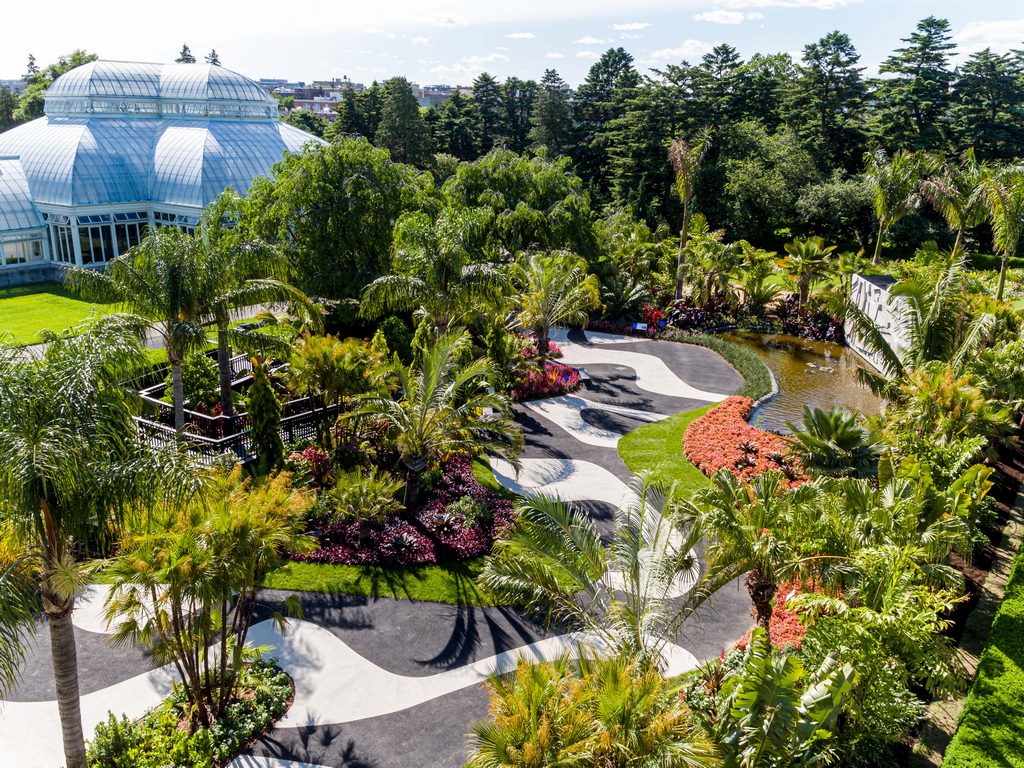 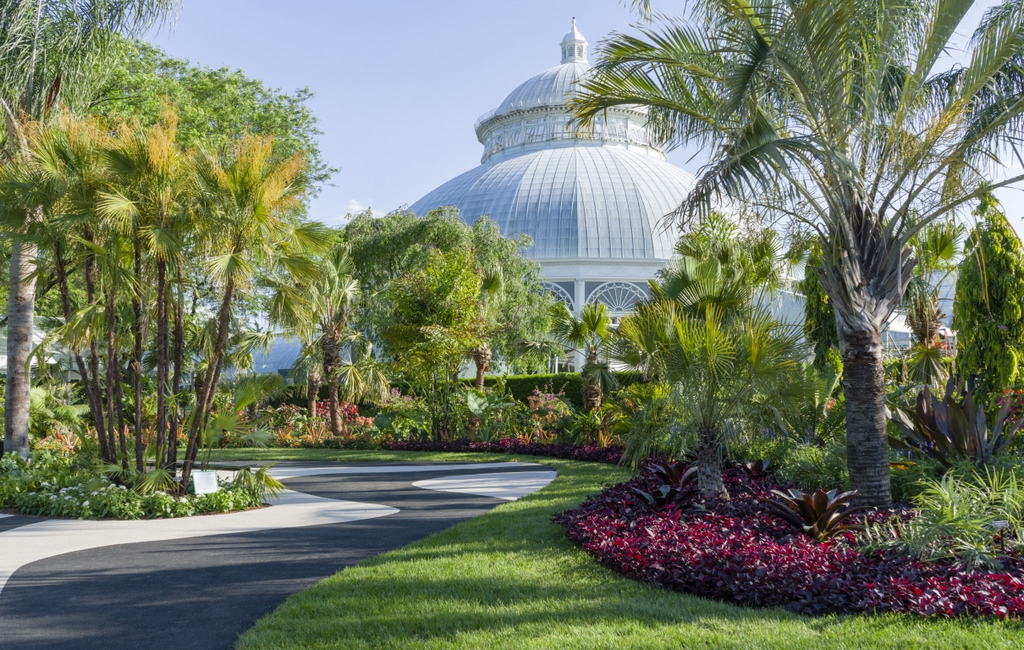 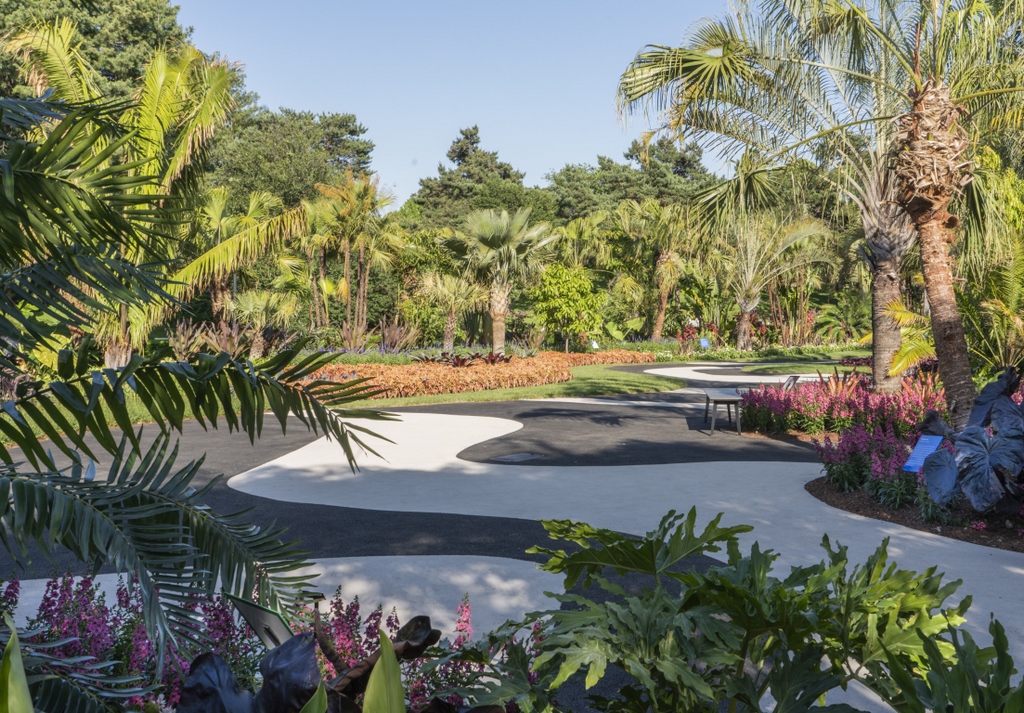 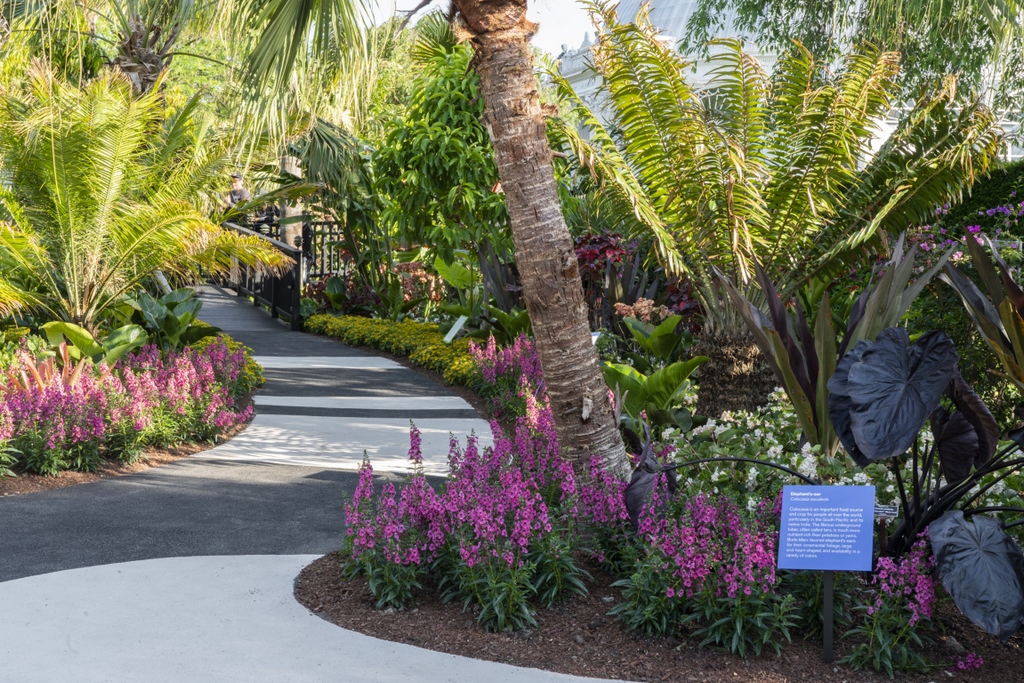 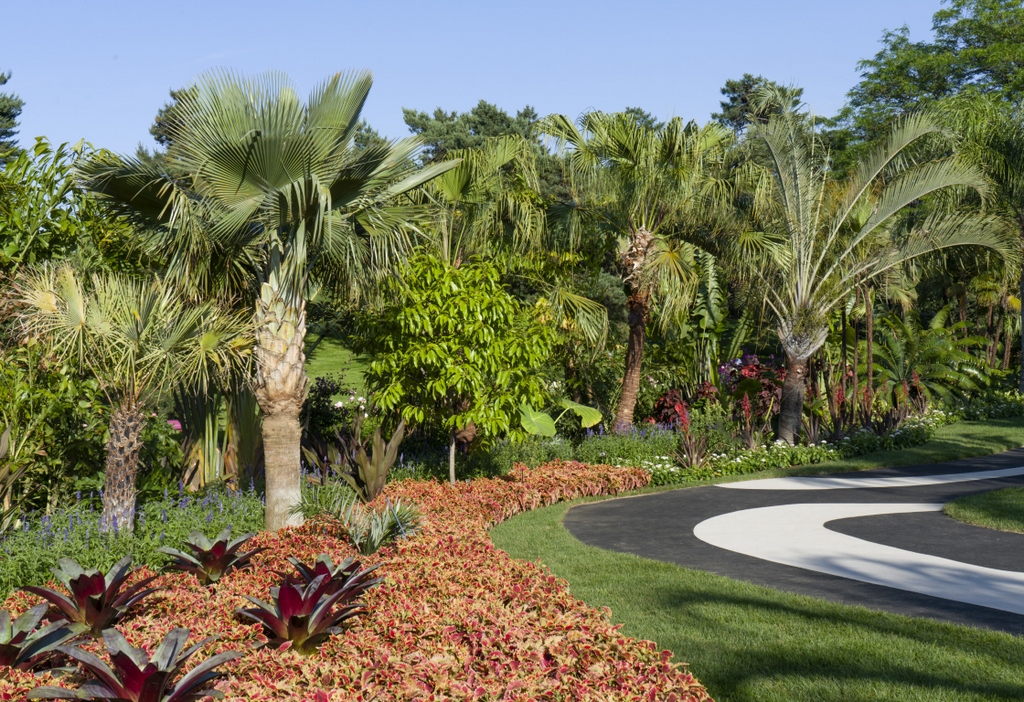 What I saw when I entered the exhibition reminded me of garden spaces of his own that Jungles has written about for WaterShapes through the years, but there was something more: NYBG offered only a compact outdoor space without the advantage of the long, across-the-water views Jungles likes to uncover in his botanical-garden projects. Nor was he able to set up large-scale masses of plants that leads the eye up and down and back and forth across those substantial gardens.

Instead, he worked more intensely with colors and textures than I’ve observed elsewhere, placing them in areas that covered no more than a few square yards or even feet with each plant type, making me stop to study the combinations and contrasts rather than moving along at the more normal clip with which I pass through and absorb these displays.

There are two real show-stoppers in the outdoor space: The amorphously patterned pathway that leads from the entrance, through the garden and over to the greenhouse; and the water wall that looms over the space like a sentinel of modernism – the perfect, serene backdrop for the storm of colors and textures unleashed at ground level.

To say Jungles nailed it for NYBG is a gross understatement: It’s a wondrously appropriate tribute to a fellow designer, capturing Burle Marx’s spirit and introducing or reintroducing those who’ve thronged to the show to a true modern master.

As I reported in a previous Travelogue (click here), I became aware of the NYBG exhibition early on when, looking over my wife’s shoulder at a photograph on her computer screen, I said it looked like a Burle Marx. She hadn’t made the connection, focused instead on the fact that it was a project under way in the fabrication studio where my daughter works.

Curious, I dropped Leah a line and asked her what she knew. Not much, she replied. Yes, they were assembling a 40-odd-foot-long water wall for an exhibition about Burle Marx, but the design she was working with came from a company called Jungles, so she wasn’t at all sure whether it was an original Burle Marx or something else.

I called her up immediately, more than a bit excited, and let her know that the design had come from my friend Raymond Jungles – a landscape architect rather than a company with a fanciful name. I gave her some background, and I had the sense that it upped the stakes for her to know that I would be following her progress with so much personal interest. 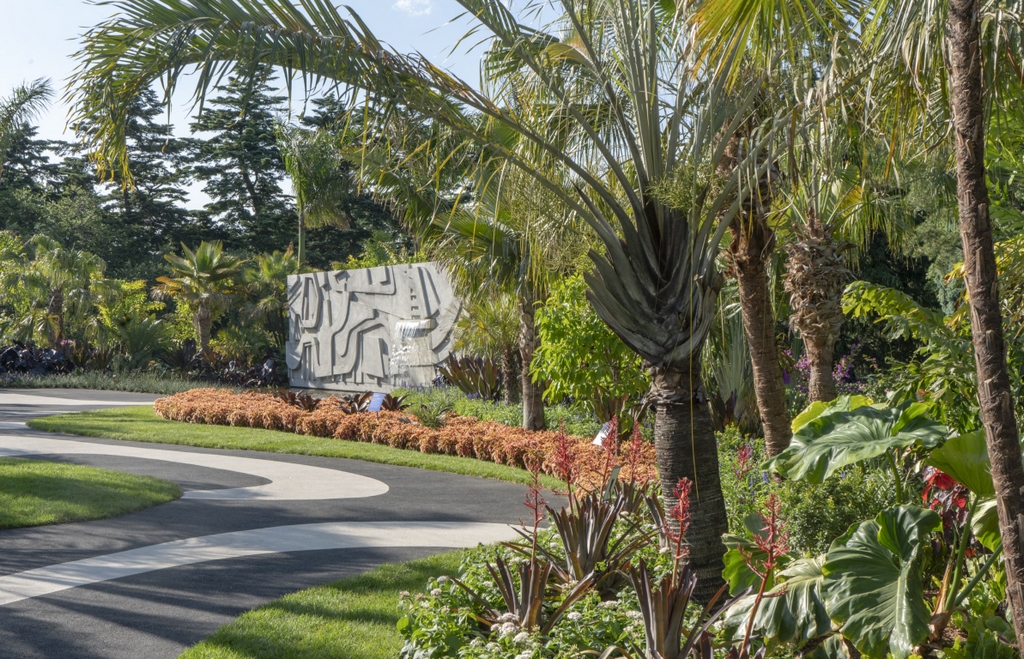 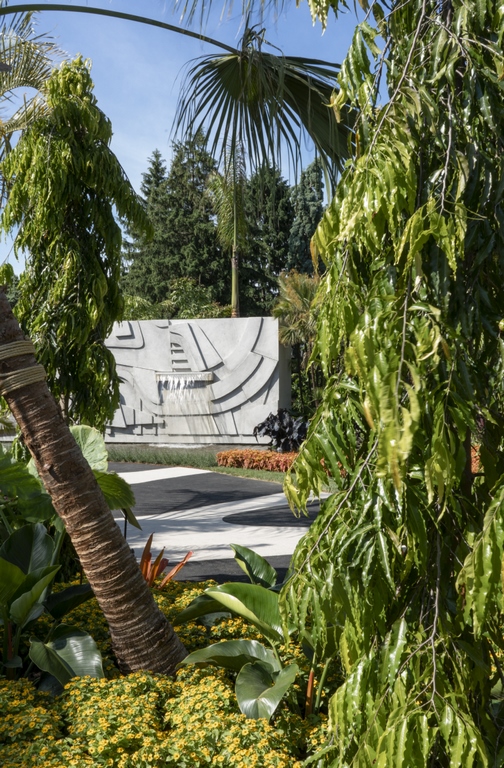 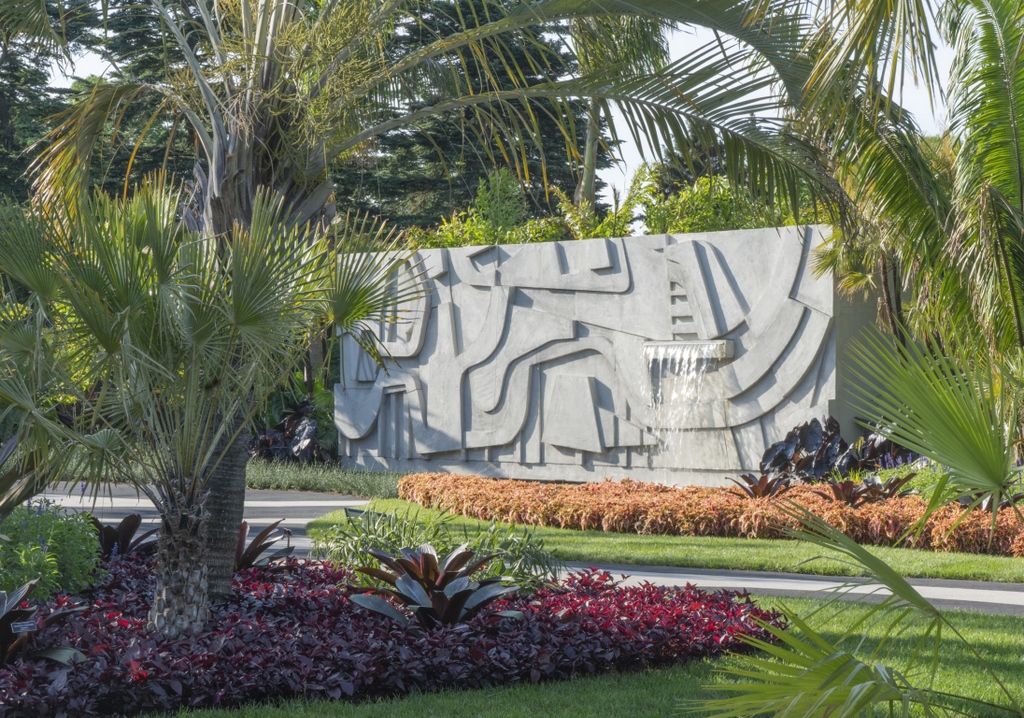 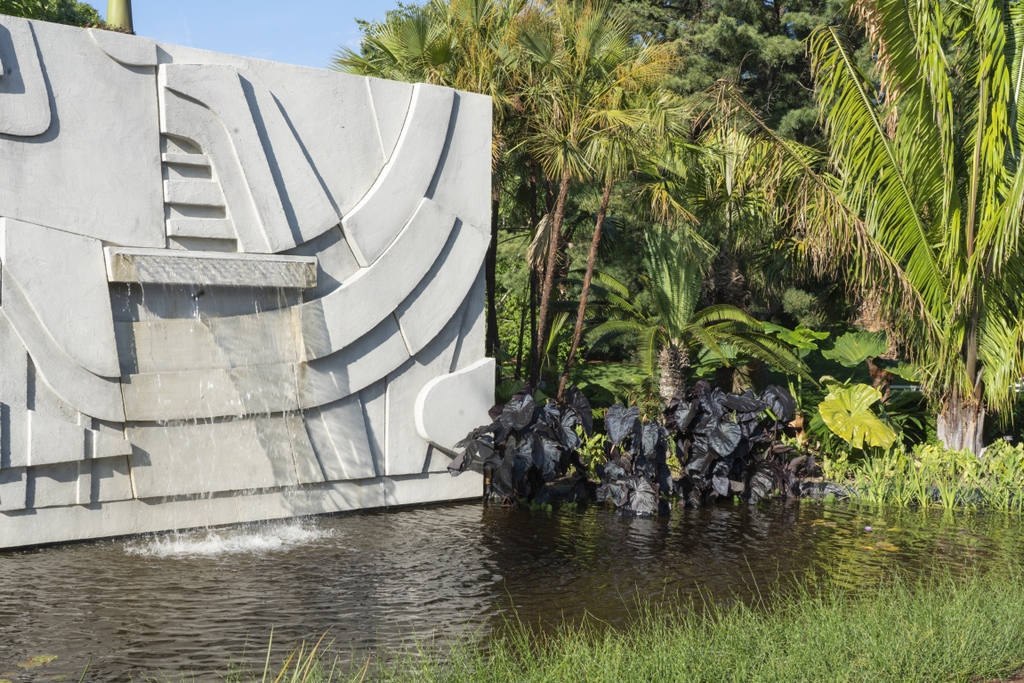 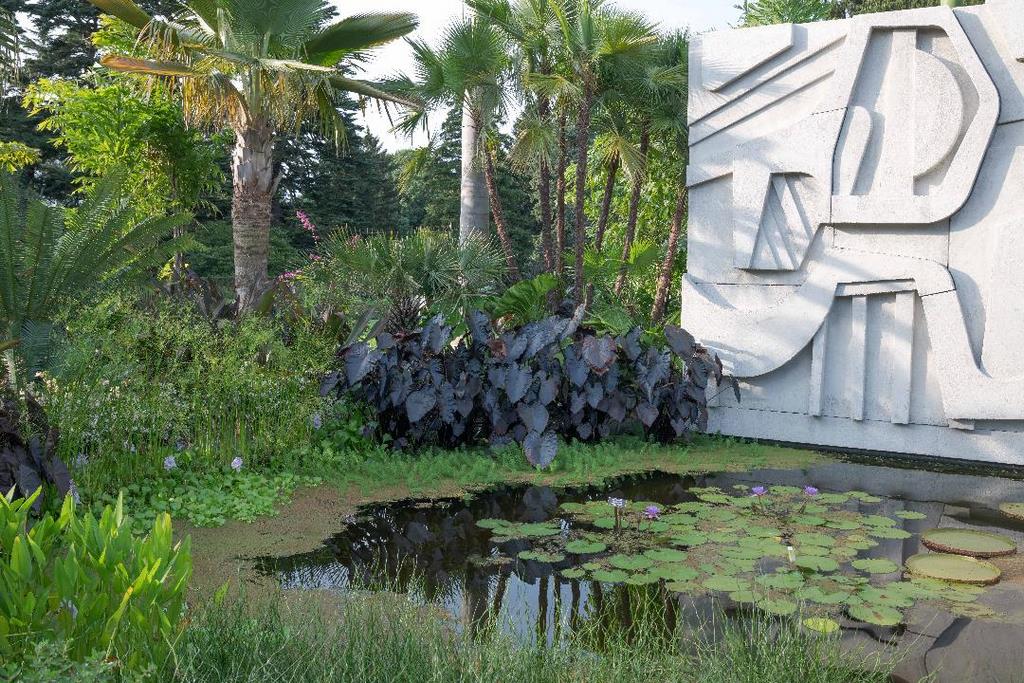 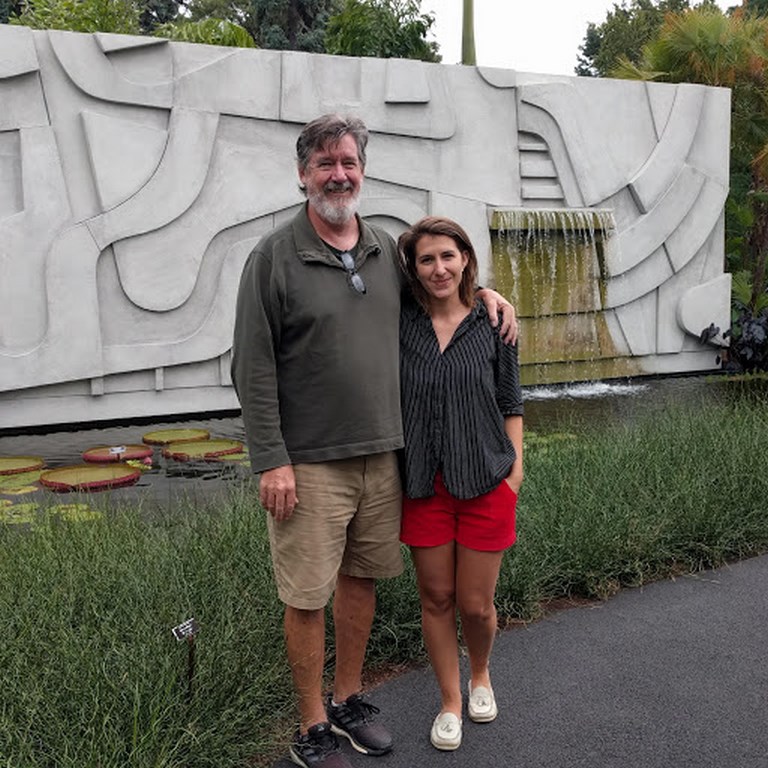 While we were visiting NYBG in September, we walked as far as we could around the water wall as Leah told me that, although the structure looks like solid concrete, it’s actually hard-foam paneling built up in layers and covered with stucco – definitely a temporary structure meant to last through the NYBG show before moving along to Tucson and Denver for similar events in 2020. That was the easy part, she said. The tough thing was that NYBG wanted the structure to meet hurricane-resistance standards, so there’s much more to the armature supporting the panels than ever meets the eye.

Beyond that, she was among those at her company who resisted the idea of cutting the wall into a set of uniform-width, easier-to-ship sections. She and others figured that such an approach would do a disservice to a work of art. Instead, they prevailed in suggesting they should cut the panels as giant jigsaw-puzzle pieces, following the curving lines to avoid the intrusive appearance of seams.

Before seeing the exhibition, I was familiar with the landscapes and concrete manipulations of Burle Marx and was deeply convinced that he fully deserves his reputation for genius as an environmental artist. The NYBG event was no letdown here: The moment I entered the space, I was transported to a slice of tropical Brazil in the midst of a great urban park in a decidedly temperate zone.

When I had finally decided to drop everything, go to New York to visit my daughter and stop by NYBG with her (joined by my wife Judy and another of our daughters, Chloe), I dropped Jungles a note to let him know. It’s all pretty cool, he told me, but whatever I did, I shouldn’t miss the gallery devoted to paintings and drawings by Burle Marx.

Before finding that room, I had been dazzled enough by the guest designer’s presentation of a Burle Marxian planting plan, paving treatment and water wall that I wasn’t sure I would be similarly impressed by yet more evidence of the man’s brilliance. I have to say, however, that the gallery visit was amazing and gave me a whole new level of appreciation for Burle Marx’s creativity and insight. (Unfortunately, photographs for publication were not allowed — but see the sidebar below for an available option.) 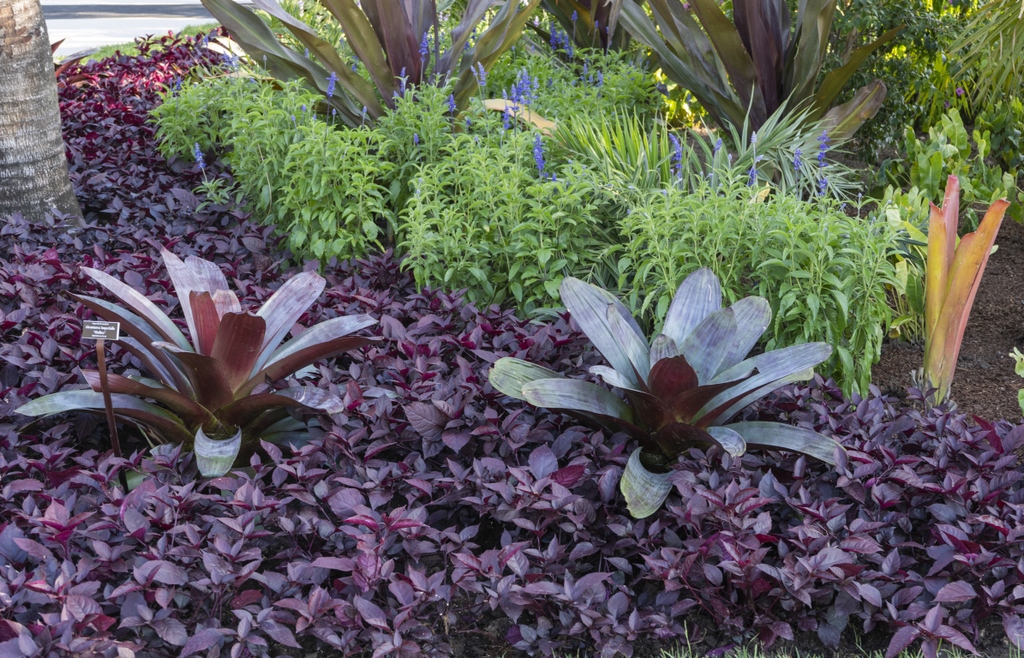 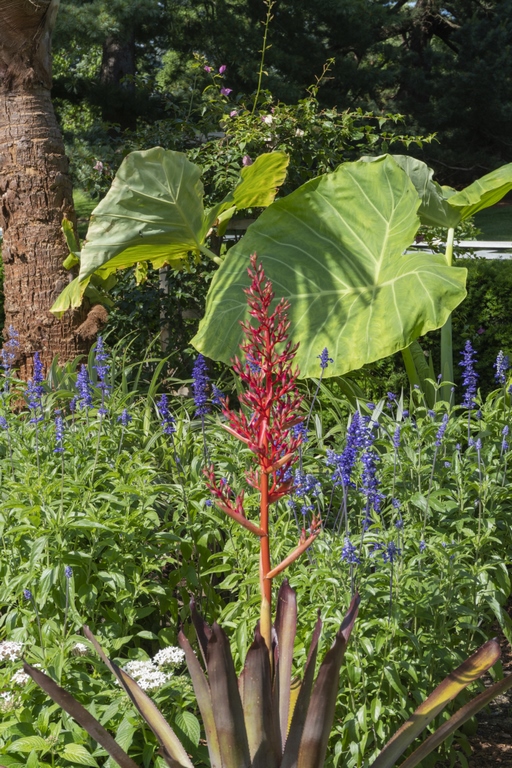 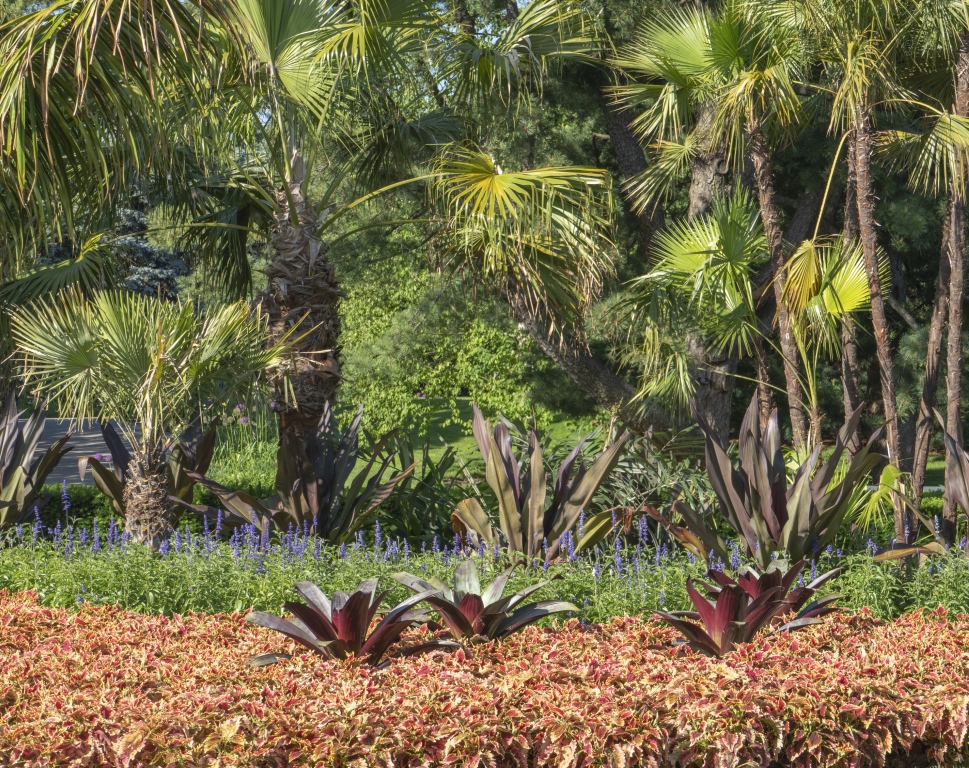 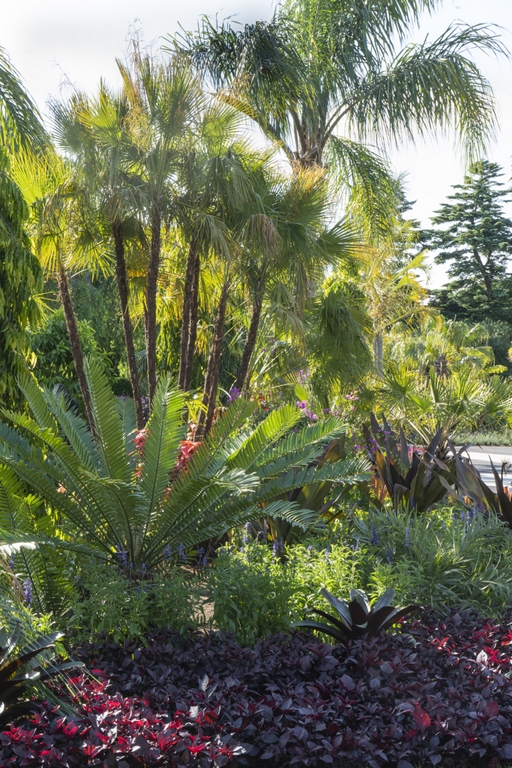 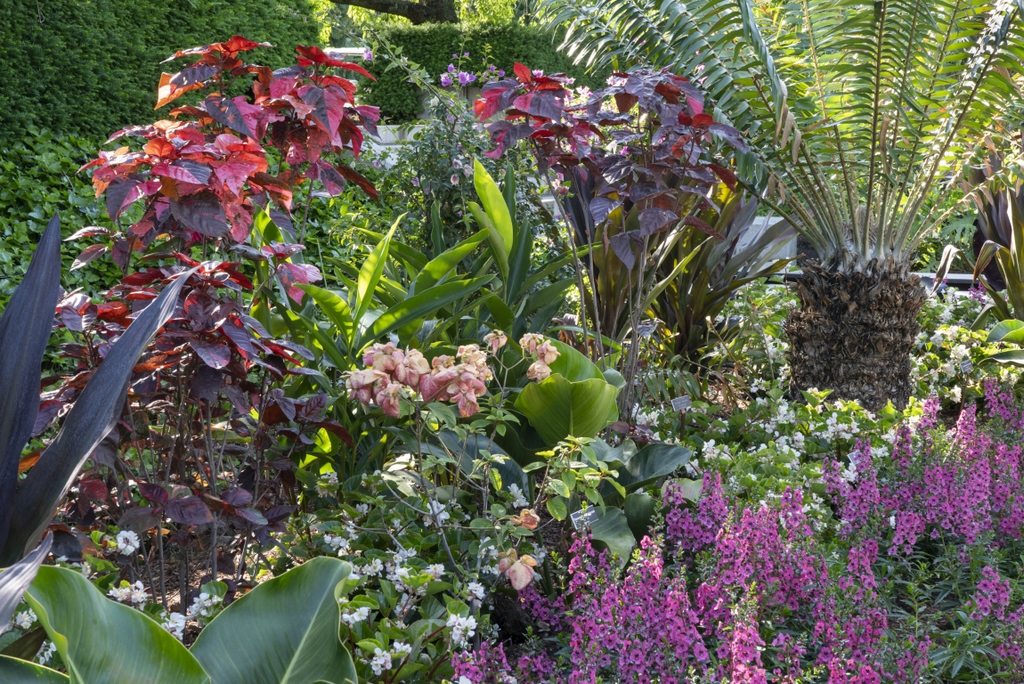 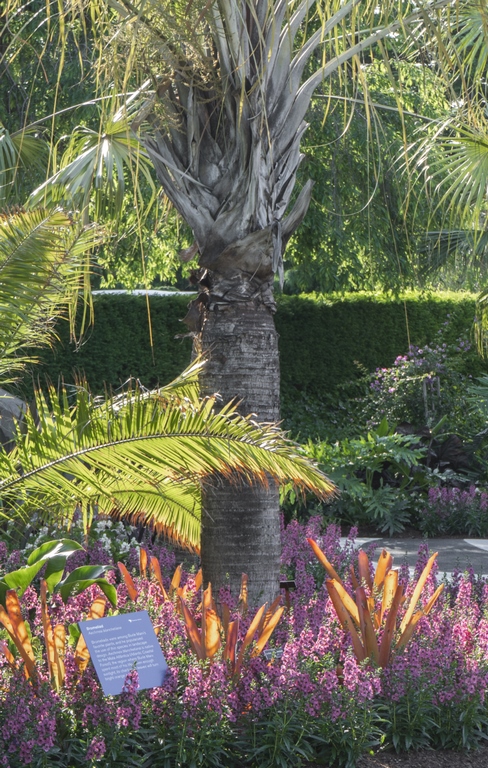 I could see that he worked from medium to medium with similar levels of intensity, drive, ambition – and an equivalent appreciation of form, line, color, texture and, I now recognize, performance. For me, seeing it all in the same context helped me recognize Burle Marx as a storyteller, as an artist who treats outdoor spaces as stages upon which (usually) ordinary but (sometimes) extraordinary things can and do happen.

When I returned to the water wall later on, I spent my time watching how people around me were moving through the space, where their eyes pointed, what they shared with companions, how they progressed from layer to layer of the landscape and, as important, how much time they spent just looking, slowing to a crawl the hastier rate of passage these sorts of spaces typically encourage.

It was, in sum, an exhilarating, informative experience – one I am glad I was able to have at first hand instead of by report. The NYBG event closed on September 29, so that’s gone. But as I noted above, the show moves on to Tucson and then Denver in 2020.

Plan on a visit: It’ll inspire you, but even more so, it’s a great, personal introduction to Roberto Burle Marx – the genius behind so much of what we now see as excellence in exterior design.