The descriptive blurb on Turner Classic Movies definitely caught my eye: “A swimming pool tycoon is coerced into giving a vacationing tourist a sales position so he can chase after a girl who saved him from drowning.” I was immediately intrigued: In a lifetime spent watching odd movies, I’d never seen a plot summary that mentioned a pool tycoon or, for that matter, anyone associated with pool design, engineering or construction.

And TMC’s cryptic description only skims the surface of Don’t Make Waves, a 1967 film with an impressive cast: Tony Curtis is the tourist/salesperson; Claudia Cardinale plays a woman who destroys Curtis’s car and luggage and (by way of apology?) introduces him to the surf scene at Malibu; Jim “Mr. Magoo” Backus and Edgar Bergen pop up in odd cameos; and Sharon Tate, in her film debut, plays a skydiver who gives momentary mouth-to-mouth resuscitation to the Curtis character and sets off what was clearly intended as a screwball comedy for the ages.

In my case, of course, the curiosity was mainly about the “pool tycoon,” played by Robert Webber. He prospers enough to park Claudia Cardinale (with whom he’s having a Swingin’ Sixties-type affair) in a waterfront apartment overlooking a small-scale Muscle Beach filled with surfers, gymnasts, body builders and assorted bohemians who come to life when the sun rises and spend their days working on their tans, musculature and groovy Malibu lifestyles. 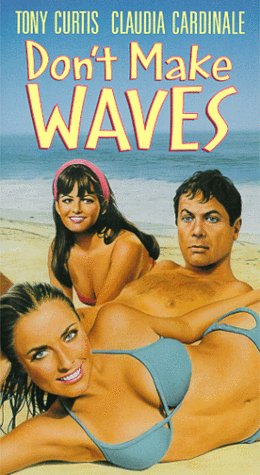 What I most wanted to see was how Webber’s pool business would be portrayed, particularly given the prominence of his role. As it turns out, he runs a lively, fashionable office dotted with lovely young women in clerical roles and otherwise populated by competitive, coffee-fueled sales guys. There’s also a construction wizard of some sort whose sole contribution to advancing the plot is indicating, seemingly out of thin air, when work can start.

Down-on-his-luck Tony Curtis “borrows” Webber’s clothing from Claudia Cardinale’s closet and for some reason decides to deliver the tycoon’s briefcase and sales kit to the office – stopping on the way to sell Jim Backus and his wife a hilltop pool. In rapid order, Curtis becomes a key fixture in the sales operation and catches the hungry eye of Webber’s wife, who actually owns the business and is aware of her husband’s hip, wandering ways.

You get the picture: There are multiple unstable situations that need resolving – and watching them unravel isn’t what I’d call fun. Disappointingly, the only glimpse of “industry activity” is a scene showing, as if it happens in slow motion, the process of installing rebar. Then there’s an apocalyptic rainstorm during which the house and pool gradually slide and tumble down the hill – with most of the principal characters inside, of course – before ultimately settling onto the highway below.

This is all apparently nobody’s fault, although Mort Sahl – who, in another weird cameo, effectively deeded the house to Tony Curtis at no cost – seems to have known the property was in trouble. (This wasn’t an uncommon news event at that time: I recall multiple stories about houses built on a prominence in Pacific Palisades that were, almost daily for a while, losing big chunks of their backyards to cliff erosion.)

The bright spot in all of this is definitely Sharon Tate, whose budding career was soon to be cut short by the Manson family. This wasn’t much of a role, but she had charisma, no doubt about it, and stole all of her scenes including one in which she skydives after Curtis when turbulence tosses him from her plane: She catches him mid-fall and delivers him safely into the just-completed pool for a wacky, chaotic promotional event.

Lots of movies at the time featured cool young folks cavorting on beaches. This is the only one I’ve encountered that pulls the glamour of swimming pools into the mix, and if this flick is any yardstick, I can see why the melange was both unprecedented and never repeated.

The strange thing about this genuinely awful film is that it seems to have been a self-consciously ambitious project. The director had shown considerable talent in previous efforts, the cast was stellar and the title song was written and performed by The Byrds, who were about as hot as a Los Angeles band could be at that time and even made an on-screen appearance in a weird poolside performance.

Just goes to show that cash and grand intentions don’t always lead to success. See Don’t Make Waves if you must, but take it from me: The water ain’t fine.

Jim McCloskey watches too much late-night television at his home in Woodland Hills, Calif.