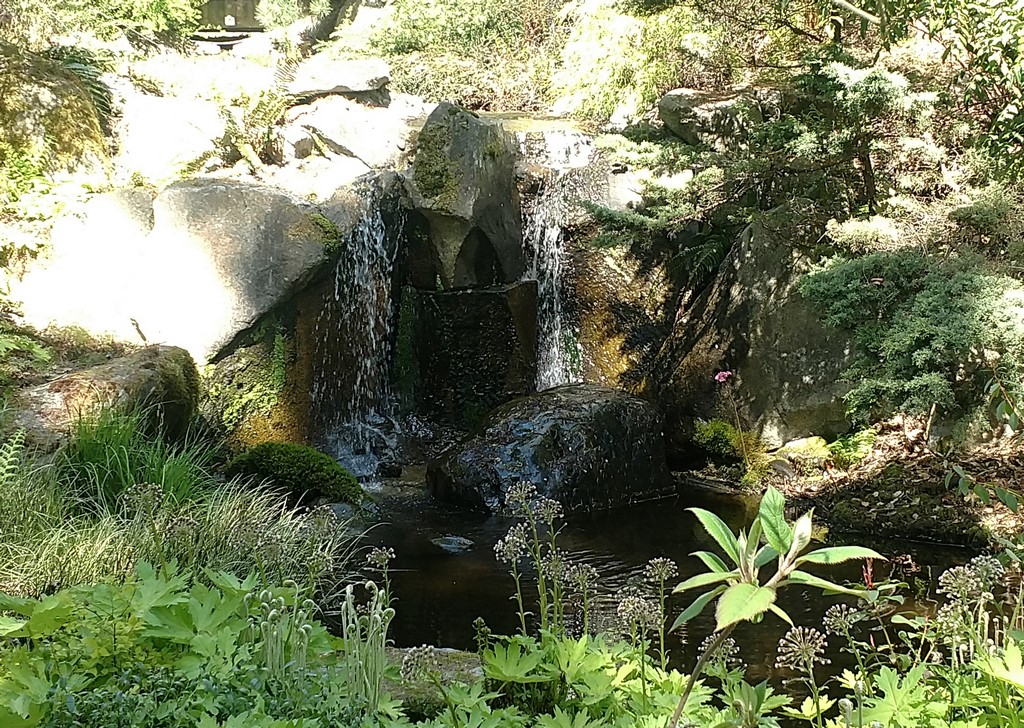 A pre-holiday visit with our grandchildren and their parents earlier this month gave me the opportunity to return to one of my favorite Seattle-area attractions: The Bellevue Botanical Garden. Covering 53 acres with long, easy trails and generous, well-tended plant displays, the facility also includes expressive watershapes in a variety of forms.

I took an immediate liking to the place during my first walk-through two years ago: All set up with kids in strollers, Judy and I passed through the entrance and immediately heard and then saw moving water. (It’s as though the designers knew I’d show up.) After a short, looping walk, we discovered that the water wall we’d seen upon entering appeared to be (but is not actually) fed by a long rill issuing from a hollowed-out boulder in a raised formal courtyard. A nice illusion. 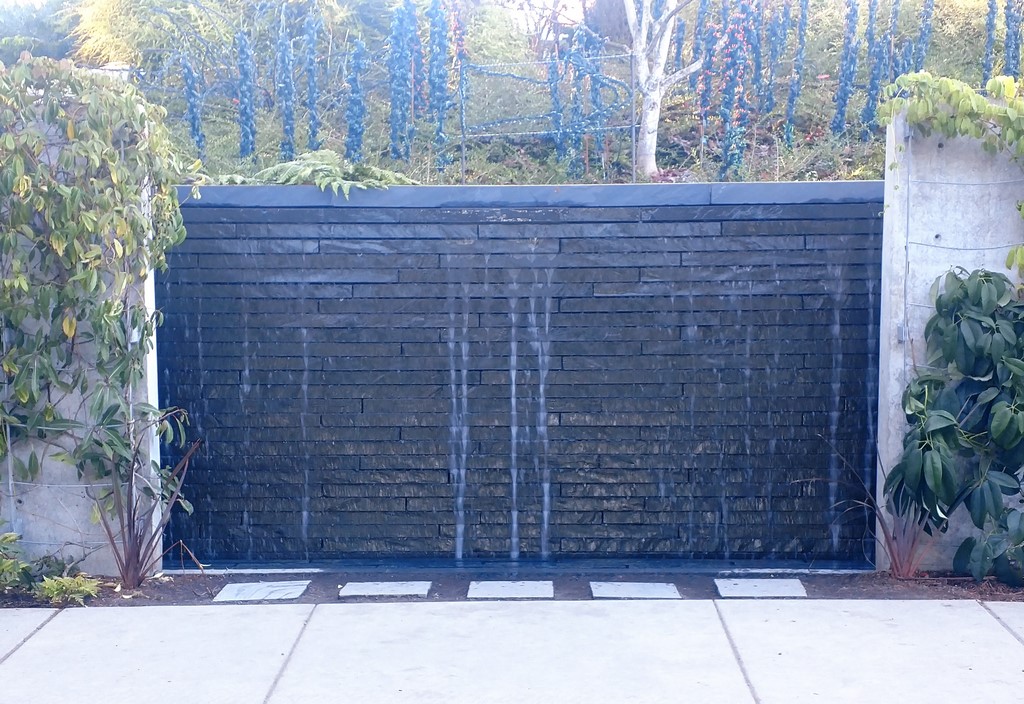 But this is just about all the formality the garden contains: Once you step past the modern, imposing visitor center, shop and conference/education buildings, the garden takes on a relaxed, casual ambiance in which tamed display areas are surrounded in wilder ways by restored woodlands and natural wetlands and meadows. 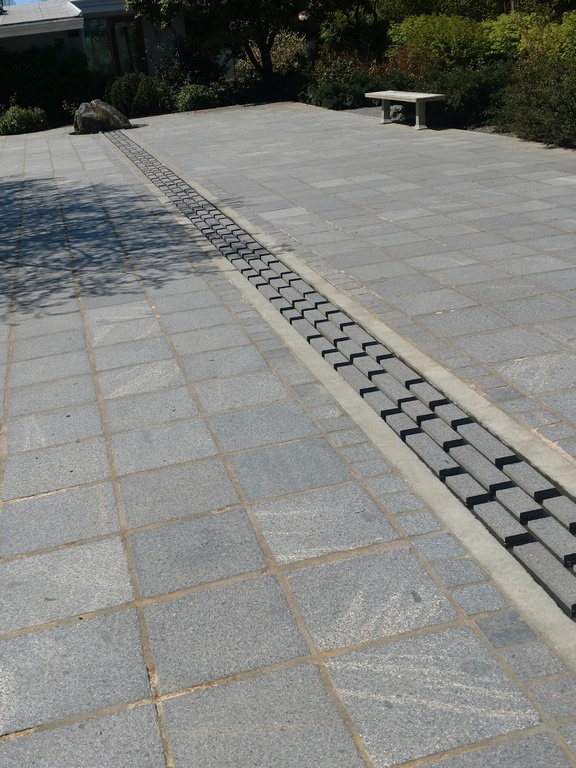 It’s about as accessible and unpretentious a botanical garden as I’ve ever visited – and I’ve seen dozens by now.

The core, original garden is small, at just a few acres, but has been extended via acquisitions and donations to adjoining properties since its founding in the early 1980s. This growth might have led to awkward marriages of old display gardens and newly acquired natural spaces, but instead the transitions are lovely – and my experience has been that taking it slow helps fuse everything together seamlessly.

One of the linking mechanisms is, of course, water – to my way of thinking, always an appealing presence. Small, hidden sources lead to cascades and waterfalls in several areas before the water pours into large ponds that occupy low-lying hollows. One of these is at the heart of an exquisite (but tiny) Japanese garden that serves as a resource for quiet contemplation even as one pushes a stroller up and down its undulating paths. 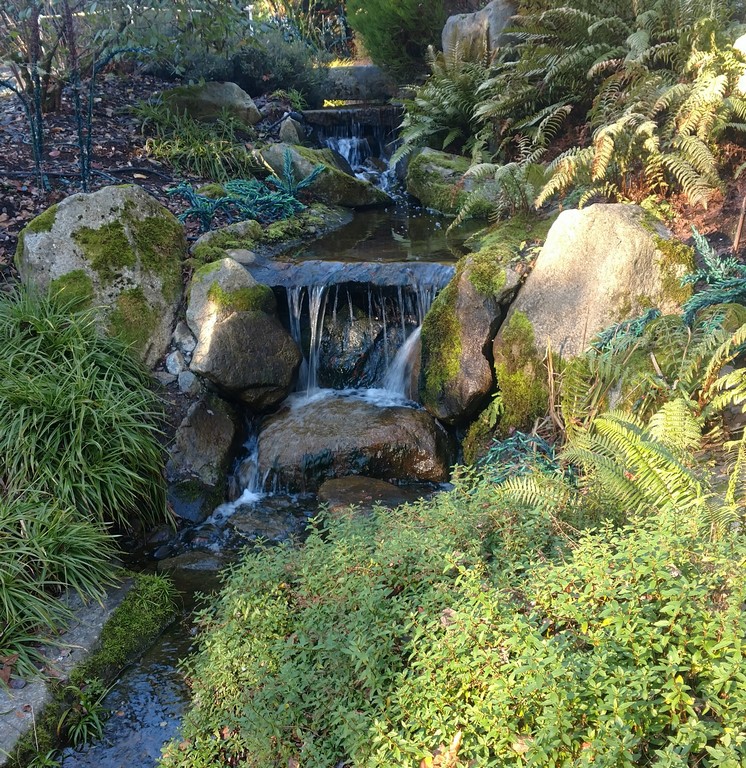 Among the garden’s most dramatic areas is a deep ravine spanned by a suspension bridge that adds to the drama by jiggling slightly underfoot. As you sway along and take in the native plants flowing down at least 50 or 60 feet, you can hear water moving below, but the base of the ravine is so dense with foliage that it’s hard to see more than a few flashes as it passes through the green carpet.

Another favorite space, right near the center of the plant displays, is a sequence of small waterfalls and ponds flowing from a hidden source near a main high path. Following it down the slope takes you to a big observation deck where you can see multiple levels of waterfalls as well as a fish-filled pond.

I don’t generally turn my traveler’s tales into step-by-step tours of places I think you should see, but in this case I felt it was appropriate: Bellevue Botanical Garden is a bit out of the way if your travels take you to Seattle, but it’s well worth the effort once you reach the East Side – particularly if you stretch the outing to include a visit to Bellevue Downtown Park, which has now been completed. (Click here for my Travelogue from a couple years back on that park in incomplete form.)

I see both stops as time well spent by watershapers – good walks, unspoiled.