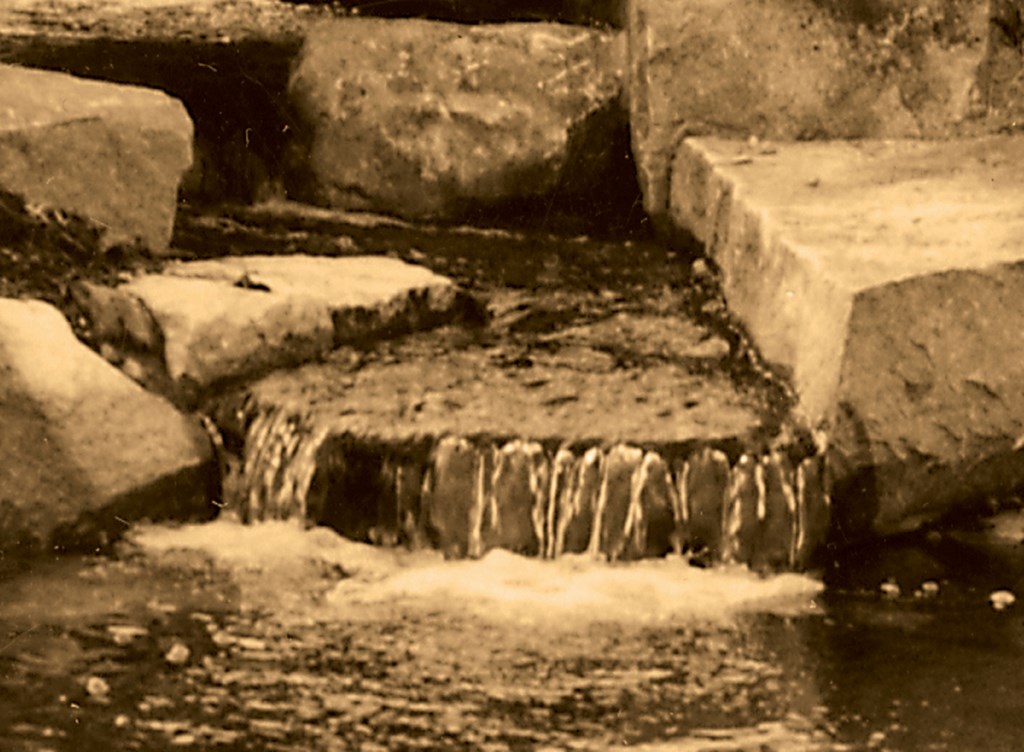 If you love rock, New England is a great place to work. A special combination of geology and the glaciers of the last Ice Age left behind a spectacular legacy of granite formations and scattered countless tons of boulders of all types and descriptions across the landscape from Maine through Massachusetts.

It’s the indigenous rock, so it’s not too surprising that affluent New Englanders have long chosen granite and other local species to accent their landscaping. And this is especially true in upscale pool, spa and waterfeature projects, where in so many cases a “natural look” is high on customer priority lists.

There’s a lot to love about granite in particular. In appearance, the effects range from subtle to dramatic – or encompass both at the same time. In compatibility, it’s superb in combination with plants of all sorts. In versatility, its capacity to be woven into structures either decorative or recreational (everything from sunning and diving platforms to bridges, pathways and decks) simply can’t be matched. And in nature, granite and water participate endlessly in the geological dance that has created the majority of surface features on our planet.

Mostly, though, I think natural rock just looks great. I’ve chosen the following project photos to give you an idea of what I do with granite and other rock types in my work and how I’ve used them on projects both large and small to create man-made environments that truly look and feel natural.

Right from the start, I’d like to point out that using granite in large quantities has caught on across the nation. This installation, for example, involved placing approximately 100 tons of granite beside a large pool in an exclusive Houston neighborhood.

To get things rolling, we selected and shipped 14 truckloads of rock from Massachusetts to the Lone Star State. On site, the stones were to be set on an 8- by 45-foot slab, 8 inches thick, that had been poured atop the bond beam. After the boulders were off-loaded, I spent a day or so visualizing how things would fit together and selecting the pieces I’d use. As is often the case with glacial granite such as this, we had a nice mix of large boulders. 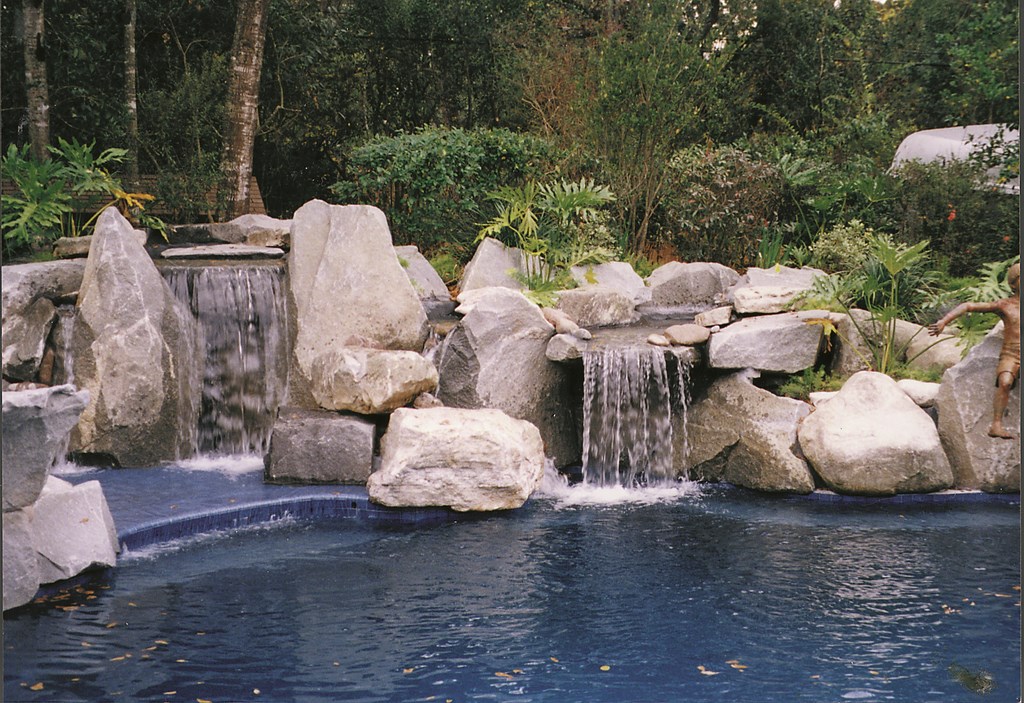 Once I had a plan in mind, it took me just two days to place the boulders using a Bobcat 975 with chain-and-fork rigging. The builder had previously stubbed up plumbing behind the slab, and we completed lines to three strategic points of origin nestled in the upper boulders.

Given the massiveness of some of the stones, I did very little structural work beyond placement. We simply sealed the waterways with concrete and, in a few places, tied some of the rocks together with rebar; for the most part, however, this job is a typical example of a rock structure that will stand up on its own.

In all, we set up seven waterfalls with a combined flow of about 300 gpm. The largest waterfall flows at about 100 gpm – a classic example of how you use two vertical stones and a recessed weir stone to create a waterfall.

This massive project covers several acres on Nantucket Island, just off the coast of Cape Cod. In preparation, more than 700 tons of granite boulders were ferried to the island for an installation that eventually featured more than a million gallons of water flowing over dozens of waterfalls and cascades.

In this case, the pools have vinyl liners and the stones are set directly in or on the sandy soil. We sealed the watercourses with hydraulic cement, but we knew going in that, without a concrete foundation, these massive rocks would move a little bit from year to year. What this means is that, every year, a maintenance crew comes in to reseal any joints that may have opened during the annual freeze/thaw cycles. 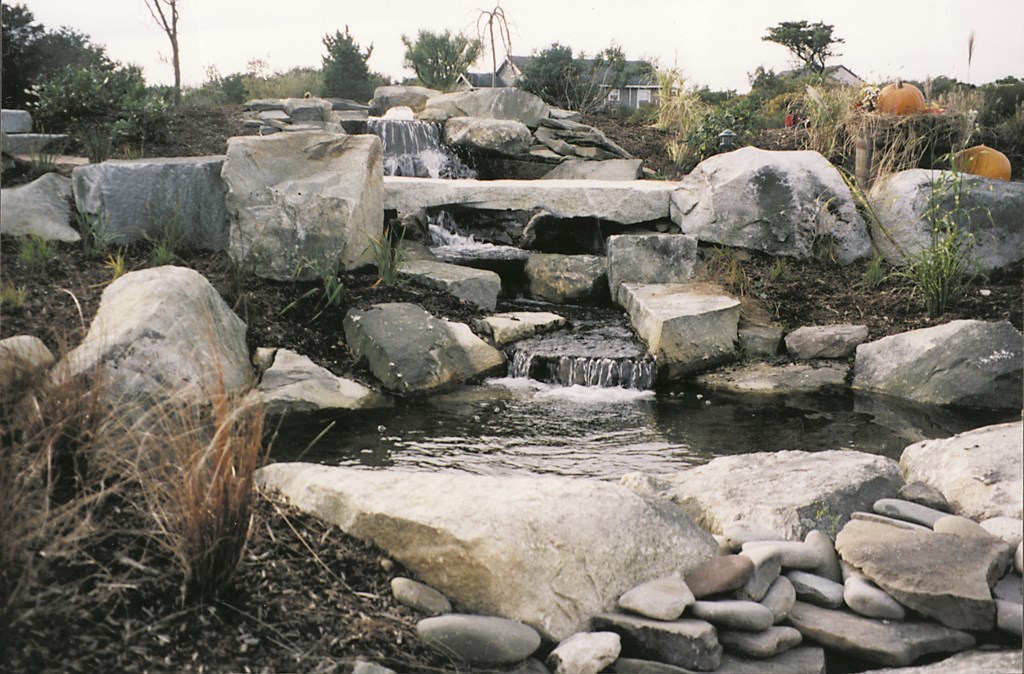 (Admittedly, this is an unusual approach. But given the size and scope of this project, it actually will prove to be more cost effective and practical than attempting to build a concrete structure capable of containing these many tons of boulders!)

When you use rock in this quantity, you’re sure to find some interesting pieces. The flat granite stone that crosses over the cascades pictured here is a good example of how the stone itself can dictate its use. When I saw this piece, I thought that it would make a great bridge, so I set up this section of the feature to create a footpath over the cascading stream. Here and elsewhere, I was able to juxtapose angular stones with rounded boulders as a way to create visual contrast and interest.

Placement of the rock took three weeks of constant work using both 80- and 100-ton cranes. The overall installation process took the entire summer.

By way of contrast to the Cape Cod project, where the boulders were placed directly in the soil, all of the boulders in this job rest inside a gunite shell. I prefer working this way: Among other things, you don’t need to worry too much about sealing the waterways because all the water will flow into the vessel.

This project was located next to a busy highway in front of a landscape designer’s facility. Working together, we created a feature that does a nice job (I believe) of balancing the elements of water, rock and plants. 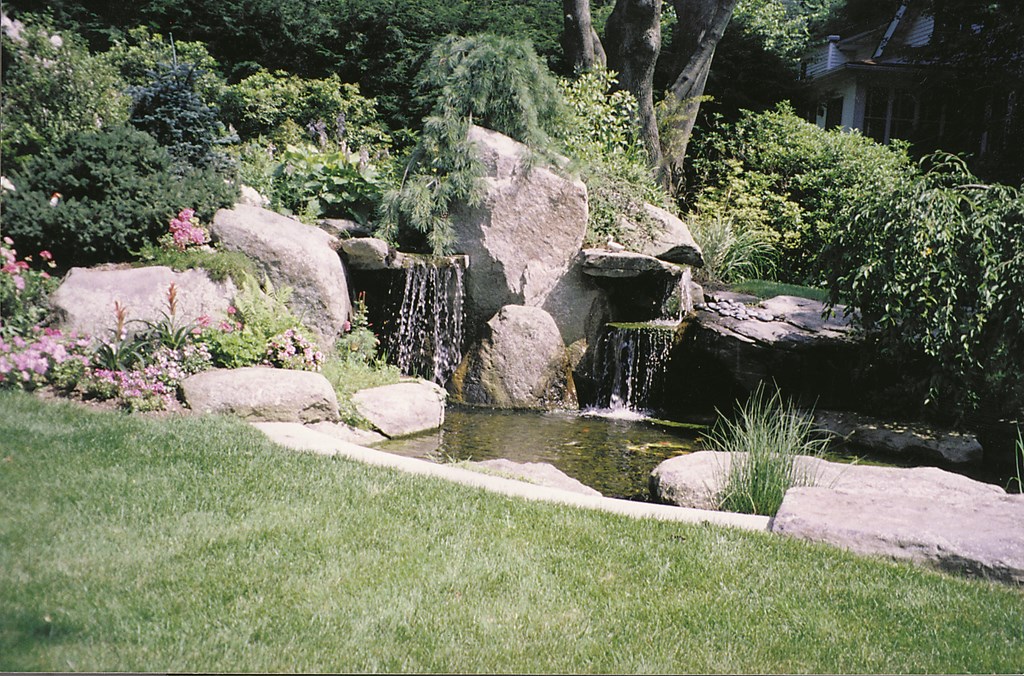 Again, the rock itself actually dictated the design of the structure. The upright boulder rising in the center has beautiful angular surfaces and clean edges, and we set things up so that water flows across two horizontal weir stones placed around this natural centerpiece.

Taking off from this central feature, the broad boulders fan out to the sides and provide a nice, natural transition to a grassy slope we created during grading. We left several spaces for plantings in and around the boulders: As the plants have grown, the whole thing has taken on a highly natural appearance.

The beautiful lichen-covered blue granite stones used in this job were already on the property when we arrived. This really kept costs down on what was to be a fairly small job anyway.

Our task was to select several small boulders and scatter them along a small stream that feeds into the waterfall. By using indigenous plants and stones, we were able to create a natural-looking streambed.

The key here is placement of the large boulder in the background, behind both stream and waterfall. I like to do this whenever possible to set off smaller features in the foreground: It’s a great way to hide the water’s point of origin and it makes the whole structure look as though it’s part of a natural system – even with a small project such as this one. 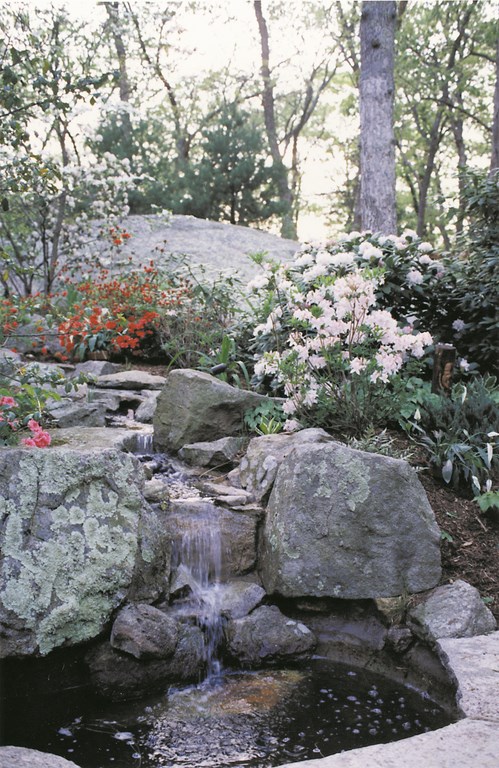 This brings me to a bit of advice for anyone who wants to work well with natural rock: Take the time to go on hikes near local rivers and streams. Not only is this great exercise and a nice way to spend the day, but it also gives you a chance to observe the random way in which nature distributes rock and how water interacts with it.

The more you take in of how natural settings and systems “work,” the more success you’ll have in translating a sense of the natural into man-made structures. Much of this cannot be explained in words, but when I select and place boulders, I let my mind’s eye do most of the work based on what I’ve seen in natural settings.

Sometimes you have to make the most of limited options. For this job, we came onto the scene after the pool had been built, and all we had to work with was a 4- by 4-foot slab. Happily, the customer also wanted us to install a granite deck to be made up of 9- by 4-1/2-foot sheets of granite. (At 2-1/2 inches thick, each of these sheets weighed in at about 1,500 pounds!)

Because anything upright would really stick out like a sore thumb, I decided to go with a low-profile waterfeature. The resulting flat surfaces and straight channel don’t look all that natural, but they work nicely with the deck. In practical terms, the two broad boulders also offer good spots for sitting or sunbathing. 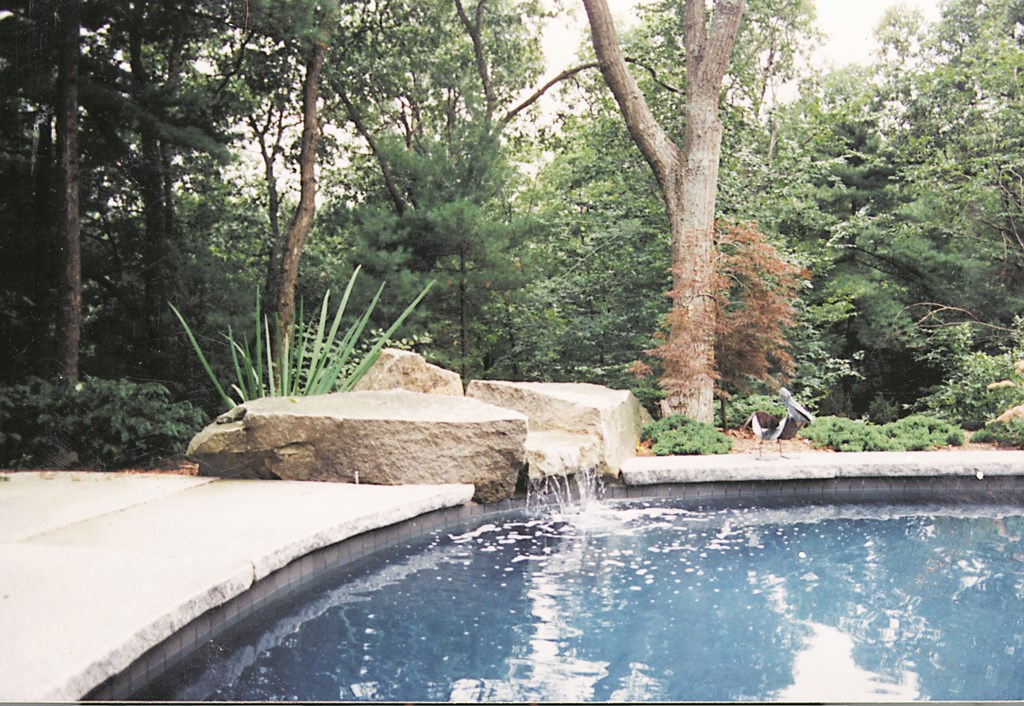 I use this example to raise an important issue: Among clients and designers alike, there’s a tendency to want to create elaborate structures – the busier the better. I find that when I’m working in a situation like this where you can’t really avoid revealing the hand of man, the less you do, the better off you’ll be.

That was certainly the case here, where the only way to use natural rock without completely disrupting the pool’s appearance was to go with clean lines and smooth, broad surfaces.

For some reason, this little waterfall has really grabbed a lot of attention: It’s been featured on several garden tours, won a couple of local design awards and has always drawn positive comments from many of those who’ve seen it.

It can be tough to tell why some of these jobs really grab people and others don’t, but in this case I think the key is intimacy. The entire system is located within a 14- by 15-foot space at the foot of a natural slope in a small backyard. The entire system contains just 1,500 gallons of water, and the shell is so small and located in such a tight space that we actually poured and troweled it into place on a frame of wire mesh and steel. 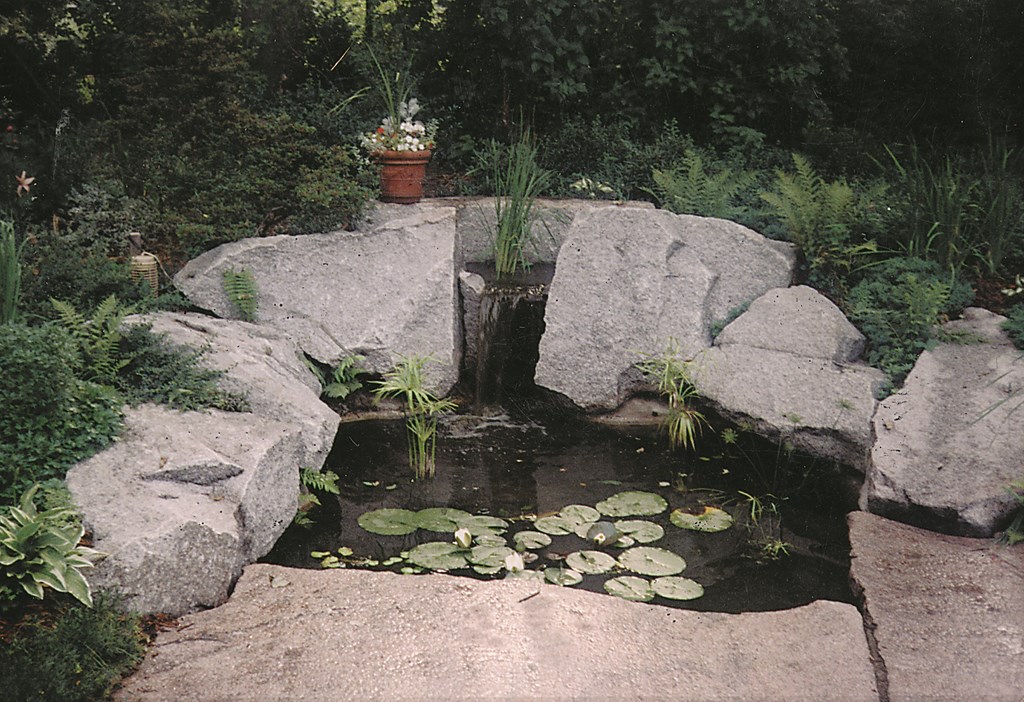 Because we had to contain the grade behind the waterfall, the whole installation took on a vertical orientation and we ended up placing some of the boulders at fairly steep angles. The kitchen window looks directly out onto the waterfall; from that special perspective, the whole project feels particularly natural and comfortable.

Roger Hopkins is founder and owner of Naturalistic Gardens, a Sudbury, Mass.-based firm dedicated since 1971 to the creative use of natural stone in high-end landscape designs. Hopkins’ work includes elaborate rock installations for pools, spas and waterfeatures as well as pavings, stone walls and settings for sculpture. A self-styled “landscape artist,” Hopkins’ work has been featured on public television’s This Old House and Victory Garden and in Smithsonian and This Old House magazines. Recently, he participated in a series of documentaries for the award-winning PBS series Nova in which he demonstrated techniques he believed were used to build Stonehenge and the pyramids and obelisks of ancient Egypt.