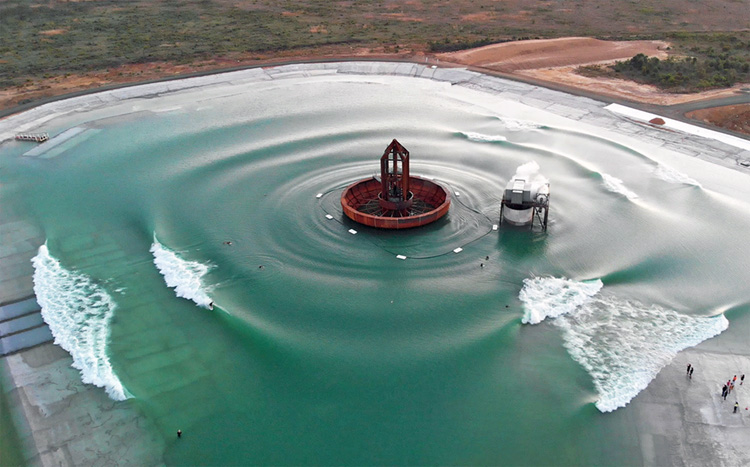 Australia has long been known as a surfing mecca, boasting some of the world’s most awesome breaks. Now, that reputation is moving inland, where the world’s largest (and arguably its most innovative) wave pool is redefining how to catch and ride the waves. Eric Herman

The quest for the perfect wave has captivated surfers for generations. Likewise, figuring out the best way to generate an artificial wave has driven its ongoing quest. The idea of introducing surfing into an otherwise wave-less landscape has resulted in a host of innovations to make a break worth riding.

The first known wave pool actually appeared way back in the 1870s when Ludwig II of Bavaria built The Venus Grotto, a subterranean complex with a variety of waterways, boats and an electrified “wave maker.” Little is known about the system beyond the fact that is allegedly did exist.

The next known wave pool was located in Munich Germany in the 1920s and is believed to be the first with actual surfable waves. The modern era of wave pools began in the 1960s in Japan at the Summerland resort in Tokyo and later the first wave pool in the U.S. debuted in the 1970s at Waikiki Beach at Big Surf in Arizona.

In most wave pools massive pumps create a surge of water gushing over the sloped pool floor. There are also experimental wave pools that use a sled system that creates a wave down an elongated pool.

Wave-generating systems have become larger and larger over time using a variety of patented technology. They exist in mostly rectangular or fan-shaped vessels –often combinations of both — that ultimately limit the size of the wave and length of the ride. In most systems the waves produced are usually more or less uniform in shape and direction, although there are systems that boast the ability to create different types of waves at varying heights.

Now, there’s a new edition to the wave pool arsenal that some surfers think may be a game changer. It’s called Surf Lake, located in Queensland, Australia. It’s the prototype of a truly innovative approach to wave craft that offers a completely novel take on how to generate waves in a manmade setting.

It’s simple in concept. A massive 16-ton circular plunger is hoisted above the center of the lake and then dropped into the water sending out concentric waves towards the shore. The bottom of the lake is contoured with a variety of reefs, slopes and flat areas that create five different types of waves at the same time. raising and dropping the plunger from differing heights, the system is able to generate a variety of wave sizes.

According to founder and inventor, Aaron Trevis, “It all started from a ripple really. I was throwing rocks into water with the kids when the idea hit me. What followed was a lot of research, looking at how nature makes waves, how one swell interacts with multiple reefs and beaches. Nature was the inspiration because we wanted the waves to be as natural as possible.”

That was back in 2013. Since then development went through different phases culminating last year when the system successfully created a massive wave face of 2.4 meters. The system is still being tested with plans to begin licensing dealer/builders throughout the world.

At this writing, the system has yet to utilize the “full stroke” of the plunger meaning even bigger waves are possible-all in shark-free waters!