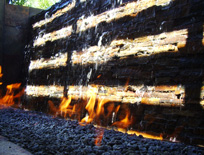 Obviously, I’m not talking about simply choosing materials that don’t burn. Rather, what needs to be discussed is finding materials that won’t explode. Indeed, what we’ve run into is that some of the materials we have commonly associated with fire features can pose significant problems under certain circumstances.

Scenario: We built a beautiful fire-and-water feature in a client’s side yard: a 12-foot-long fire trough backed by a six-foot-tall waterfall spilling over a stacked-stone wall. As the water trickled down that rough surface, it generated a wonderfully soothing, rain-like sound. And although the water appeared to spill into the fire, it actually flowed into a basin set behind and below the fire trough.

(A side note: I’m a big believer that side yards are too-often ignored. In this case, the dining room had a large pair of French doors that looked out over this area, where we also installed an arbor that tied into the fire-and-water feature. Truly beautiful both outside and from inside the house.)

Long story short, as we were working, I read an article that warned against using river rock with fire: It tends to be nonporous, so heat builds up inside, sometimes to explosive levels. The recommendation was to use lava rock instead, which neatly confirmed the decision we’d already made to fill our fire trough with lava rock.

In this case, however, we didn’t consider the fact that small amounts of water would be splashing onto the lava rock from the adjacent waterfall. As a result, the extremely porous lava rock immediately absorbed the water, which almost instantly turned into steam and created pressure that built up inside the rock.

Much to everyone’s chagrin, after we initiated the feature and went on our way, it wasn’t long before small bits of heated lava rock (pea-sized and smaller) began popping off and flying in all directions at considerable velocity. Before anyone noticed what was happening, however, the homeowners had developed so much affection for the feature that they’d gotten into the habit of leaving the doors open so they could hear as well as see the water.

As luck would have it, some of the lava bits flew inside the house and landed on the hardwood floors. The problem was discovered when the homeowners walked on the rock and scratched the floor.

Happily, we didn’t find out about the issue by someone being hit directly by flying rock. The little bits weren’t big or hot enough to hurt skin or start a fire, but they were probably moving fast enough to cause an eye injury.

Solution: I did a bit of research about different products ripe for use with fire. In this case and for purely aesthetic reasons, we shifted away from lava rock and went with a glass product that’s commonly used in fireplaces and effectively eliminates any explosive tendencies. (I was also intrigued by round “cannonballs” made of refracted brick — a look I’ve filed away for another project.)

The glass we use is recycled and tumbled, so it looks nice and has rounded edges that won’t cut anyone who handles it. Indeed, this is the same glass we sometimes use as a decorative aggregate in concrete countertops or even as groundcover in planted areas when we’re after an unusual look. It’s great stuff and definitely is reliable in fire applications.

As for lava rock, we still use it in our fire features — but never right next to a waterfeature that will cause it to get wet or even splashed regularly. And when we do use it, we always let it “burn” for an hour or two with nobody around it as a means of driving out any moisture. We also advise our clients to do the same after it rains, alerting them to the fact that small projectiles might chase them away if they come too close.

Lesson Learned: Issues with materials sometimes arise in unusual and surprising ways. The Internet is a marvelous tool for finding out what others are experiencing — and an easy way to avoid having clients go as ballistic as their fire features!