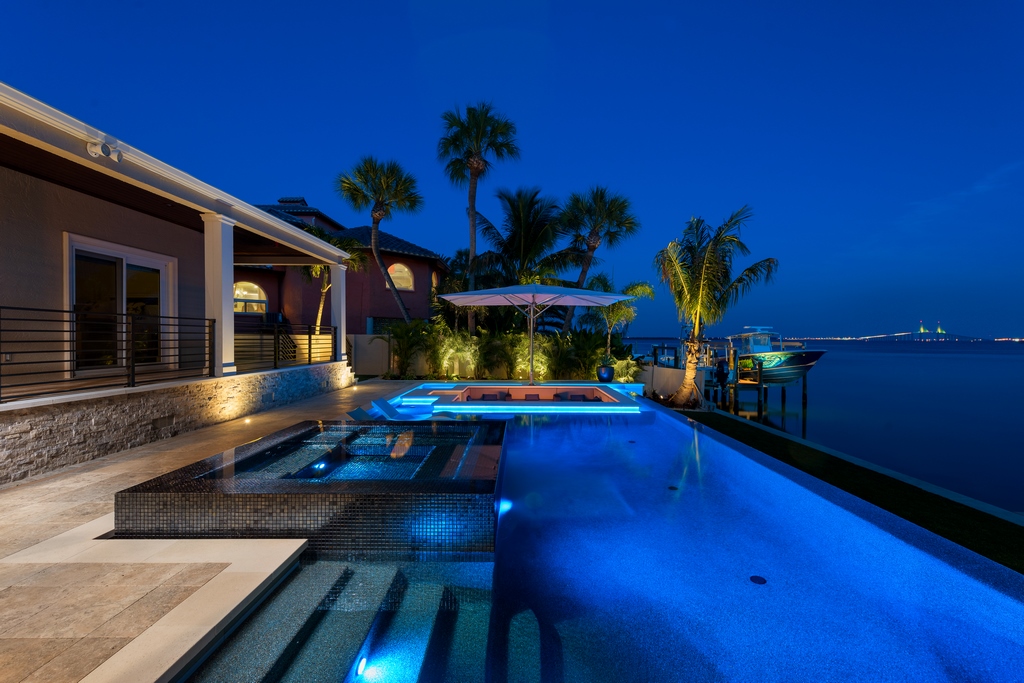 This project started with an unexpected phone call.

The clients, who live in Iowa much of the year but have a second home on the water’s edge in Tampa Bay, had spotted a Wall Street Journal article in which a photograph of a swimming pool with a “floating” fire pit had been included. They loved the look and figured they could use it to dress up the poolscape that had come with their Florida retreat – if only they could find a local company to do it!

Looking through the text, she spotted a reference to the fact that we at Ryan Hughes|Design|Build had designed and competed the project that had captured their imaginations and was thrilled to learn that we were based in Tampa. They spent some time on our site, then gave me a call. We chatted for a while and there was an instant rapport: They very much wanted me to take on the project, and I very much wanted to help them.

The pool was the problem: It was a plug-ugly, 1990s-vintage tank that ate up almost all of the available outdoor space. In addition, its vanishing-edge trough was too small, the equipment pad was unimpressive with big pumps pushing water through extremely small pipes, and there were signs that the whole thing was starting to decline – finish delaminations and the like. We’re rarely keen on doing remodels, but we’re positively dead-set against tackling them when the canvas we’re given has so many obvious defects.

I still wanted to help, so I referred them over to Miami, Fla.-based Aquatic Consultants, a company with expertise in finding solutions for all sorts of watershaping challenges. It also helped that Aquatic Consultants’ CEO, Brian Van Bower, lived nearby and could see the pool for himself. If our friends at Aquatic Consultants came through with a workable renovation plan, I told the homeowners, we would be happy to tackle the project for them.

Soon thereafter, the clients sent me a skillfully prepared renovation plan and I saw that the direction being taken was just fine. But in looking things over, I couldn’t help thinking that, while the documents addressed the existing pool and its issues, they really didn’t address the space’s more general shortcomings.

In my next conversation with the homeowners – only my second – I did what I could to unpack the situation and give them my best advice. I started by praising my colleagues’ work, but I asked them if it was what they really were after for their bayfront property. There would still be too little deck room for comfortable entertaining; limited seating around the pool; and no provision for the outdoor dining area they’d told me they wanted. There wasn’t even a place near the water where they could sit in the shade and enjoy views across the bay to Skyline Bridge.

It might be possible to shoehorn some of these elements into the available space, I said, but the aggregate price of adding them would add significantly to the cost of the remodel – so why not spend a bit more and start over with an approach that would give them absolutely everything they wanted by way of luxury and functionality in one coherent, well-designed package?

Mind you, I hadn’t even met these folks face to face, but from our two lengthy conversations, I knew they were friendly and gregarious and had lots of Florida friends and that, above all, they wanted a place to entertain comfortably, whether for sit-down dinners or for casual evenings with cigars and cocktails around a fire. 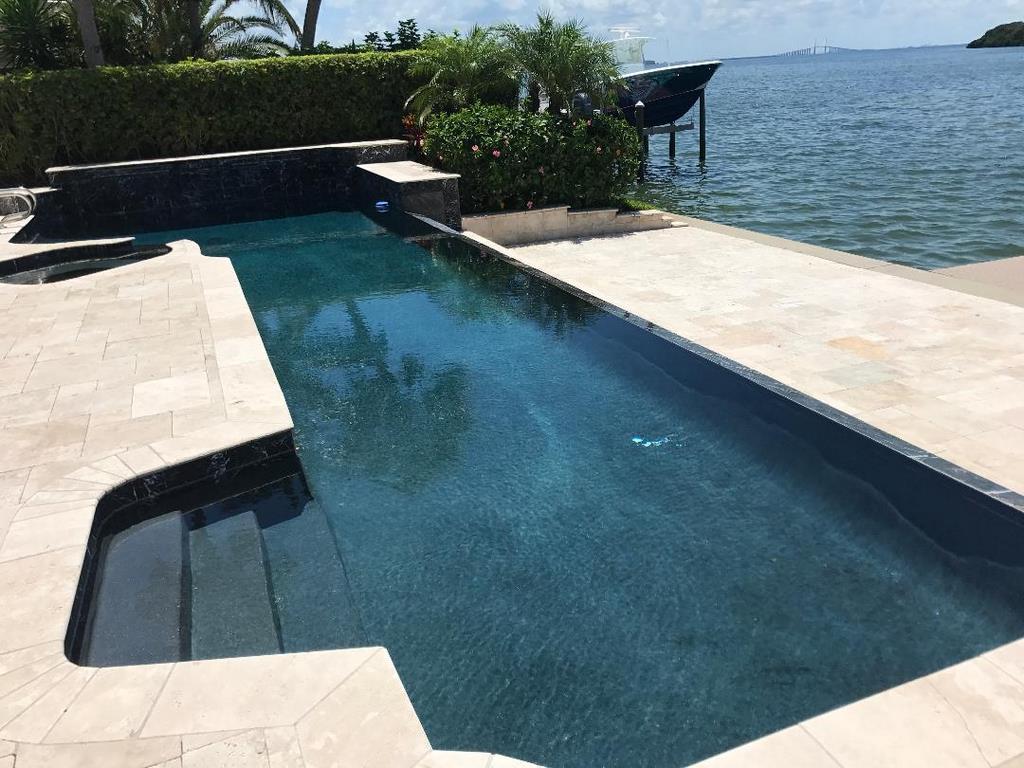 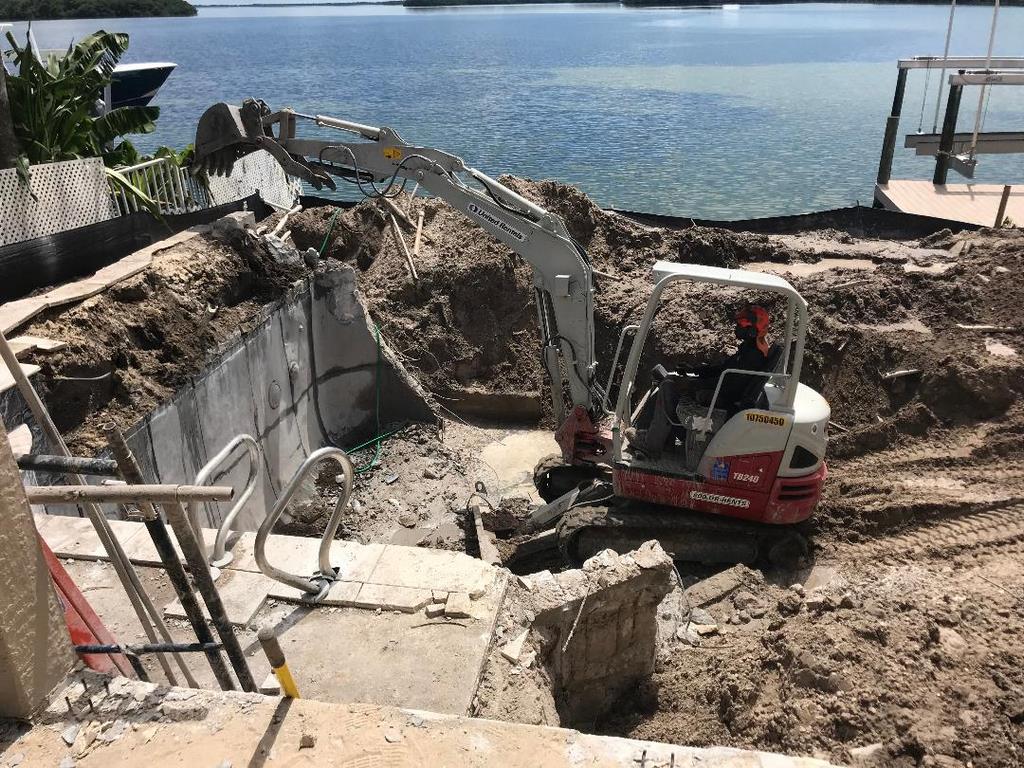 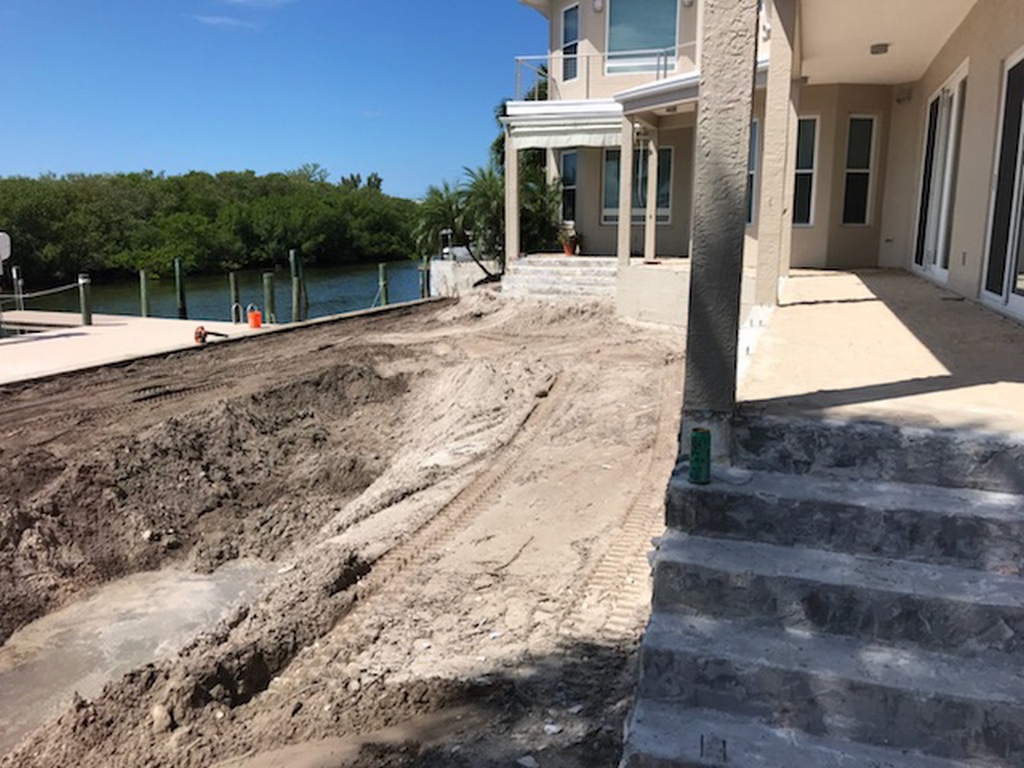 They didn’t hesitate: As soon as they could, they sent a design retainer that put our company to work with the total revision of their waterfront space. There was only one provision: We had 90 days to get everything done so a family wedding could take place there. Oh, and one more thing: Access would have to be limited to a five-foot-wide strip to one side of the house.

I asked them to come to Florida so we could go over our proposal on site and in person. In our first face-to-face session, they showed me through the home’s interior and were very clear in saying they wanted a comfortably modern look outdoors despite the home’s Italianate exterior styling. We met again a few days later, by which time the design was about 75 percent complete. After these two meetings spanning about three hours, I’d picked up enough from them to finish the design with no more than a few small tweaks.

Soon thereafter, they approved the design and we immediately went to work, starting by calling in a company to saw-cut the old shell into three-foot-square chunks we could easily put in a small Bobcat and haul out front for disposal. While this was happening, we started working with officials in charge of the seawall that fronted the property.

To start this conversation, we had to excavate the area for inspection. The way it was set up, we would have been required to continue observing a 12-foot setback that would’ve meant significantly shrinking the desired deck area. Knowing there were options, we worked with building officials and outside engineering consultants and figured out a way to restructure the support system for the seawall in such a way that the setback would be only eight feet, giving us the room we needed to keep the decks at full width.

There were some tense moments while this was all being reviewed and negotiated, but in the end we inserted a row of helical piles to replace the old deadman system, set up a big grade beam along the full length of the seawall and recaptured every inch we needed to make our full design work.

This flurry of activity cost us a bit of precious time, but we had recognized what was coming and were ready to make up for the delay. The only thing that could get in our way now was a major weather event: Happily, nothing outrageous came our way and we rolled on at a good pace.

Despite the fact this was a long, thin area, we packed a lot of features into the backyard. At one end is a large, sunken seating area around a large, floating fire pit. This area was topped by a cantilevered umbrella to give our clients the shady, sheltered spot they wanted for looking out over the bay in comfort.

It’s a large area under an equally large umbrella – in fact, we determined the conversation pit’s size after we’d sourced the biggest one we could find. We headed this way because the clients entertain a close-knit group of local friends a few times a year and initially wanted enough space for eight or so to sit in comfort. 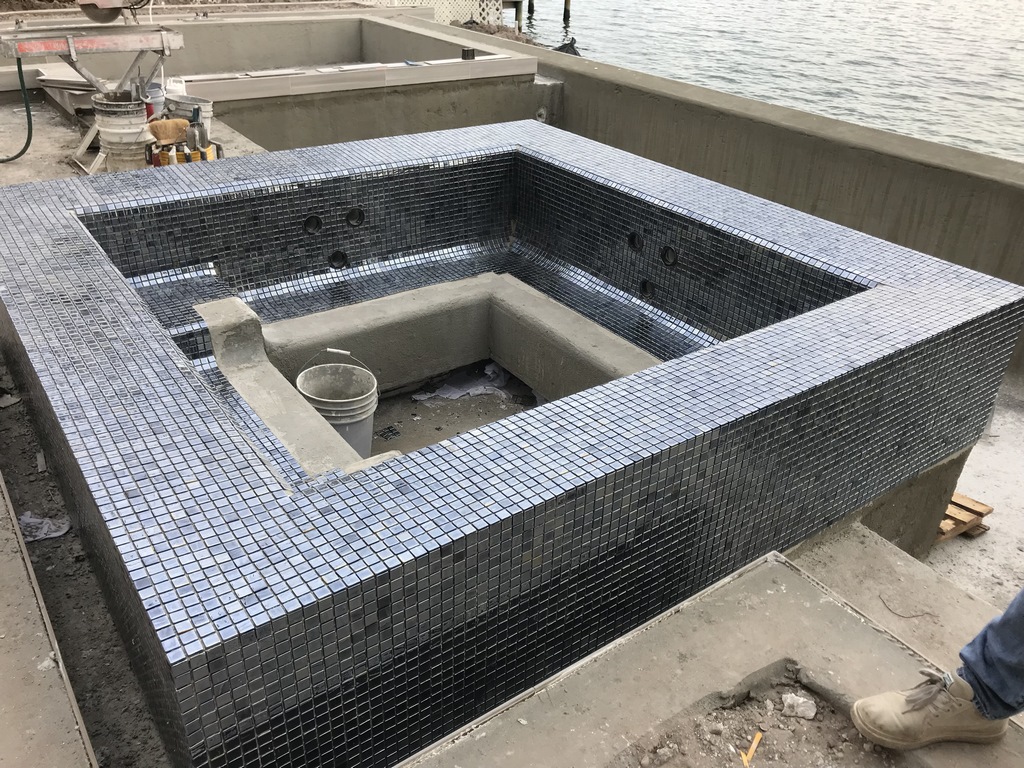 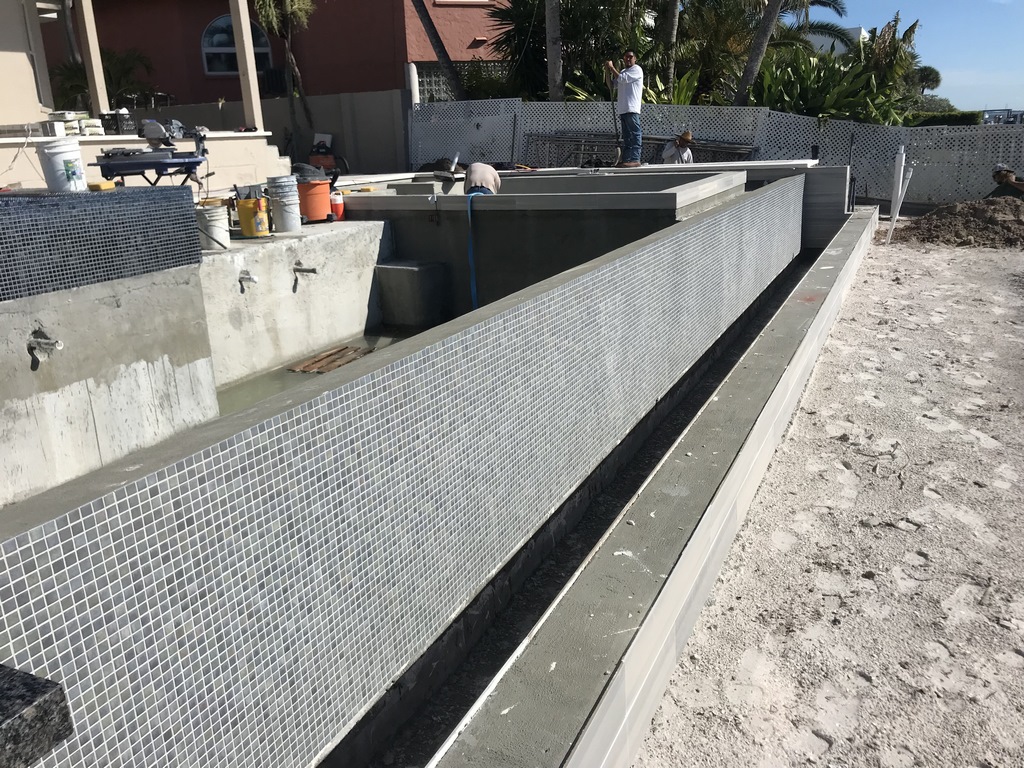 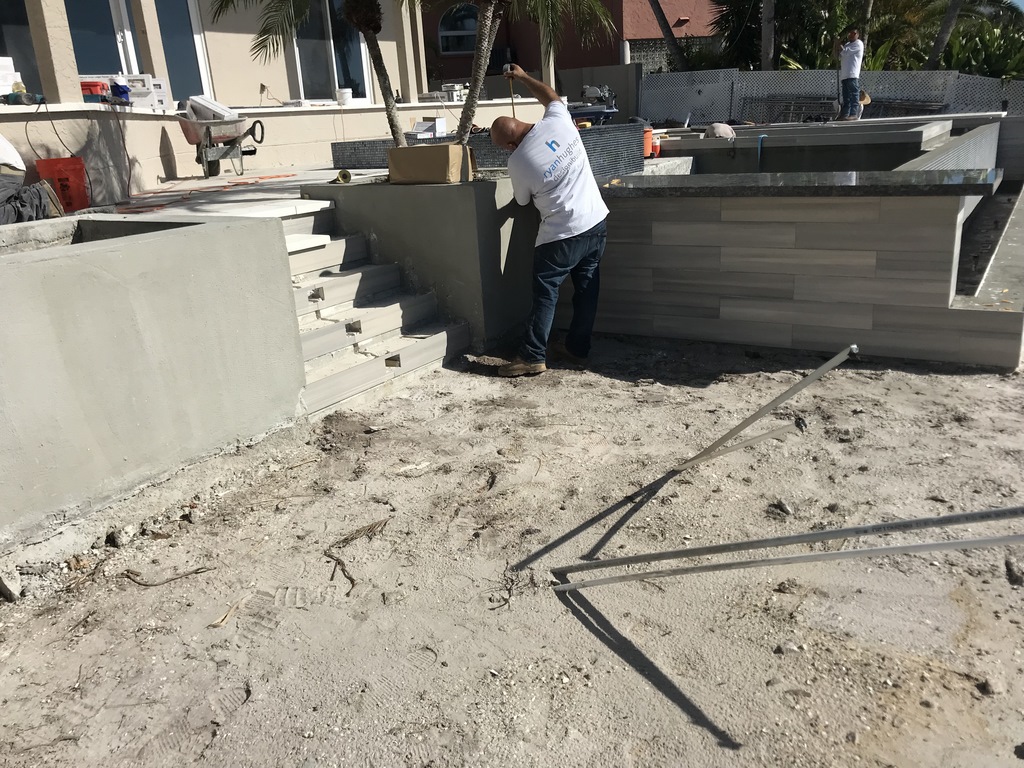 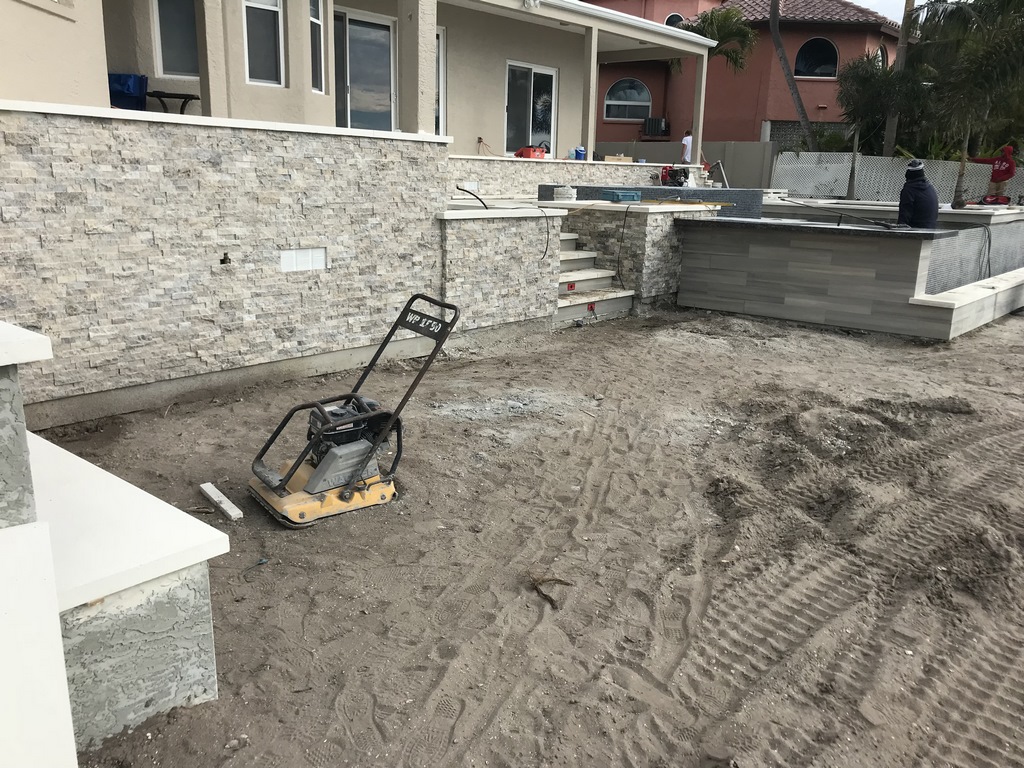 Their initial thought was that this would be an outdoor place for the men-folk to chat over cigars and drinks. If that’s the case, I said, seating for eight wouldn’t be enough: Once the warm, sheltered comforts of the space were known, it was likely that the women would want to join in.

(I was soon proved to be right: Seating for eight couples was just what was needed, and during the wedding, I was told, the homeowners counted 22 people in the seating area at one time!)

The pool sits next to the sunken seating area, extending a ribbon of water around all sides of the fire-pit structure and feeding a vanishing-edge effect that works along the entire stretch of the bayside wall surface. The pool also includes a shallow lounging area to provide some additional seating, and there’s a raised spa next to a swim-up bar on the far corner. Beyond the spa and bar is a snug little niche that hosts an outdoor dining space – and incredible mealtime views of the bay just a few paces away.

Once the old shell was cleared away and the seawall-related issues were resolved, actual construction of the pool and deck areas went smoothly. We kept an eye on the calendar, of course, but given the short timeline, we’d planned every on-site action down to the last detail so specialty crews moved on and off site as efficiently as possible.

That’s one of our company’s advantages: As both designers and builders, we have the expertise on staff to coordinate creative and construction activities and schedule time on site with precious little slack. The result is that we moved along and met the deadline with relative ease.

Even with our task-smoothing planning, however, we were furiously busy for the 90-odd days we were on the job site. With limited access to the street, we took care of demolition, seawall-support reconstruction, site preparation and construction of the conversation pit, pool, spa and outdoor dining area as discussed above. But we also installed a long, skinny equipment pad along the side of the house and saw to all landscaping, deck installation and outdoor and in-pool lighting.

In fact, we took care of everything facing the water, and this included modifying, updating and repainting the house to give it a more modern look. Then we pulled the entire scene together by taking care of the furnishings, right down to color selections and upholstery choices. Before we were through, no stone had gone unturned in our effort to bring both luxury and functionality to the setting. 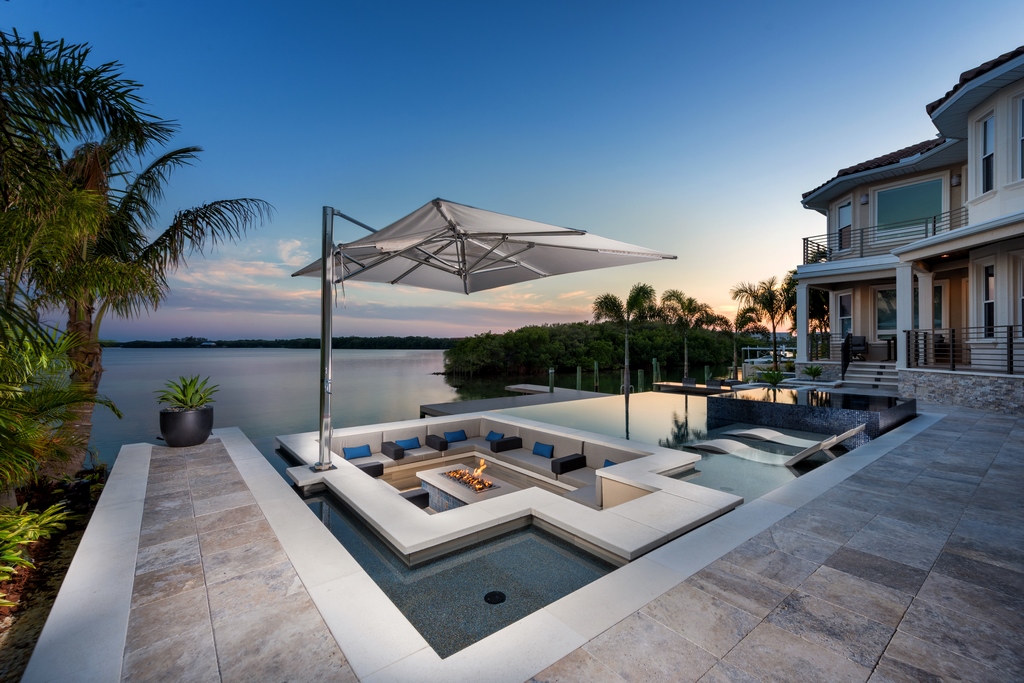 From a philosophical standpoint, we’ve never been all about watershaping as art: Instead, we focus on creating great outdoor environments, working with the site’s characteristics to give our clients places to entertain, relax and exercise in spaces where we provide sun exposure as well as shade, in-pool and out-of-the-water seating, warm spaces, cool spaces, dining areas, fire features and more.

Given our client base, we also have opportunities to make these spaces beautiful, even spectacular – but that’s an outcome of the process rather than our initial target.

There was another factor in this particular project. Early on, we recognized that the proposed remodeling would come without guarantees that the setting would be everything the clients wanted it to be. That’s why we advocated clearing away the old to make way for the new: Even with a good remodeling plan in hand, this was simply the right thing to recommend and do.

So we wrapped everything up in time for the wedding, which went off without any hitches. The homeowners’ trust enabled us to produce a setting that is luxurious, functional and beautiful – and it’s award-winning, too, as recognized by Luxury Pools magazine with its prestigious Pinnacle Award for 2019.

Not a bad ending to a story that started with an unexpected phone call.