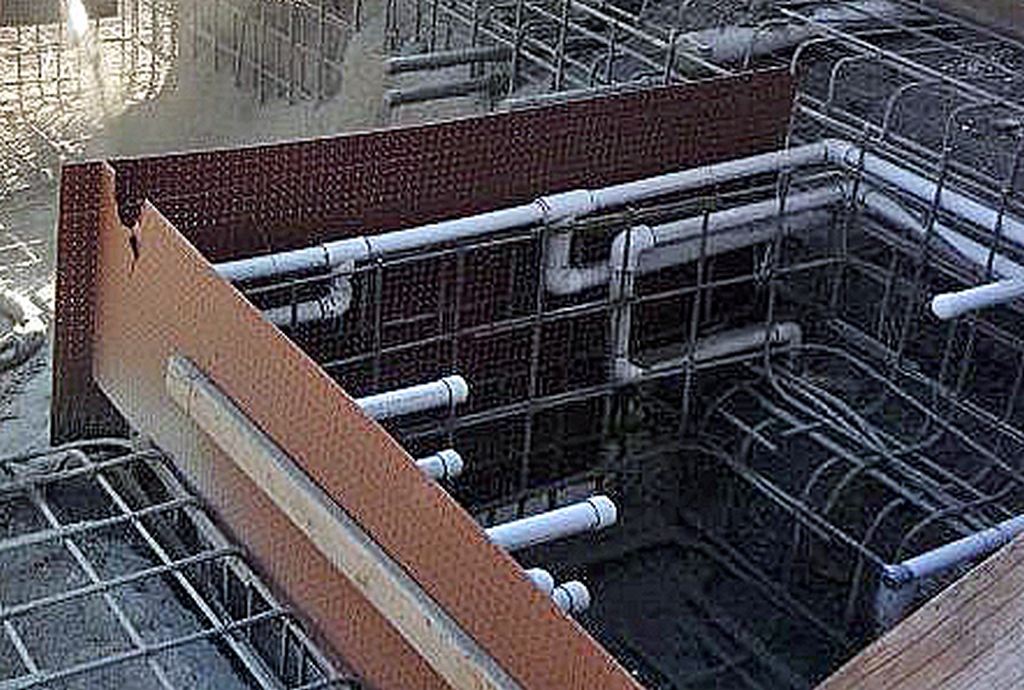 Tying form boards to structural steel is a huge mistake, says Paolo Benedetti: There’s no standard or rationale that supports the practice, and as he notes here, that’s simply because doing so conjures a host of problems and can result in structurally incompetent walls and shells.

When you do expert witness work as I do, sometimes you see jaw-dropping mistakes made by pool builders that make no sense at all. It becomes even more dumbfounding when you learn that in many cases, those unthinkably bad practices are widespread.

I realize there have been improvements within our industry since the turn of the millennium, but honestly some of the harmful missteps I see seem like imports for another era long gone by – or at least they should be. Time and time again, I see the use of shortcuts that expose the builder to potentially tremendous liability.

Here is a classic example, one that simply amazes me. And, yes, as evidenced by this set of horrific images, this actually happens!

The faulty construction I’m addressing involves tying form boards to the reinforcing steel when preparing to shoot freestanding walls. Amazingly, some pool contractors allow their shotcrete subcontractors to place sheets of Masonite or plywood directly against the reinforcing steel. One might imagine this done for expediency sake in tough-to-form places like spa damn walls, or maybe this is simply how this disastrous technique was taught to those doing it. 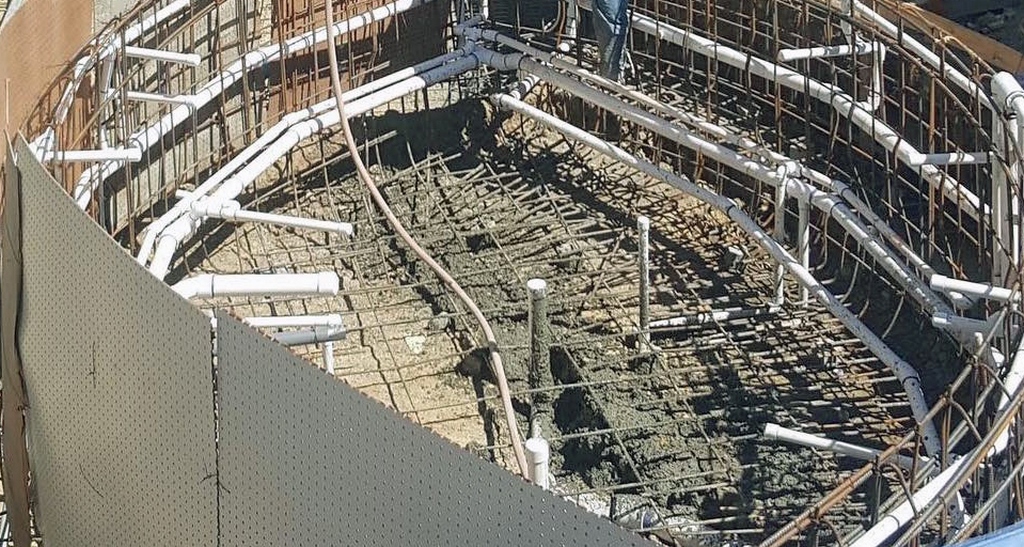 Why is this shortcut such bad practice?

As the wall is shot from one side, the reinforcing steel is not encapsulated with concrete on the backside (because the board is being held or tied there). Proper encapsulation is critical because it prevents moisture from attacking the steel making it absolutely necessary for proper structural integrity. Steel that’s not encapsulated does more harm than good.

After the concrete stiffens up and becomes self-supporting, the form boards are removed. Then another layer of shotcrete is shot against the exposed side to cover the steel. The problem is the receiving surface is no longer plastic and it’s not prepared to receive additional shotcrete. Instead, you’ve just created a vertical cleavage plane inside the wall. They are not creating a three-dimensional bonding plane that is in a saturated surface dry (SSD) condition – instead it is a relatively smooth surface – which means you’ll be creating a cold joint. On top of that, trapped laitance and crust prevent the subsequent layer from bonding.

According to my friend and colleague, Bill Drakeley, co-founder of WaterShape University and a leading authority of all things related to shotcrete placement, applying the second layer of concrete to cover the steel can cause cracking or fracturing the concrete because it hasn’t developed the strength to resist the impact. These cracks will often go unnoticed and lead to water intrusion, corrosion and accelerated decay of the structure.

That’s a condition that leads to failure at any time, and often does in the form of severe cracking or even complete structural failure. 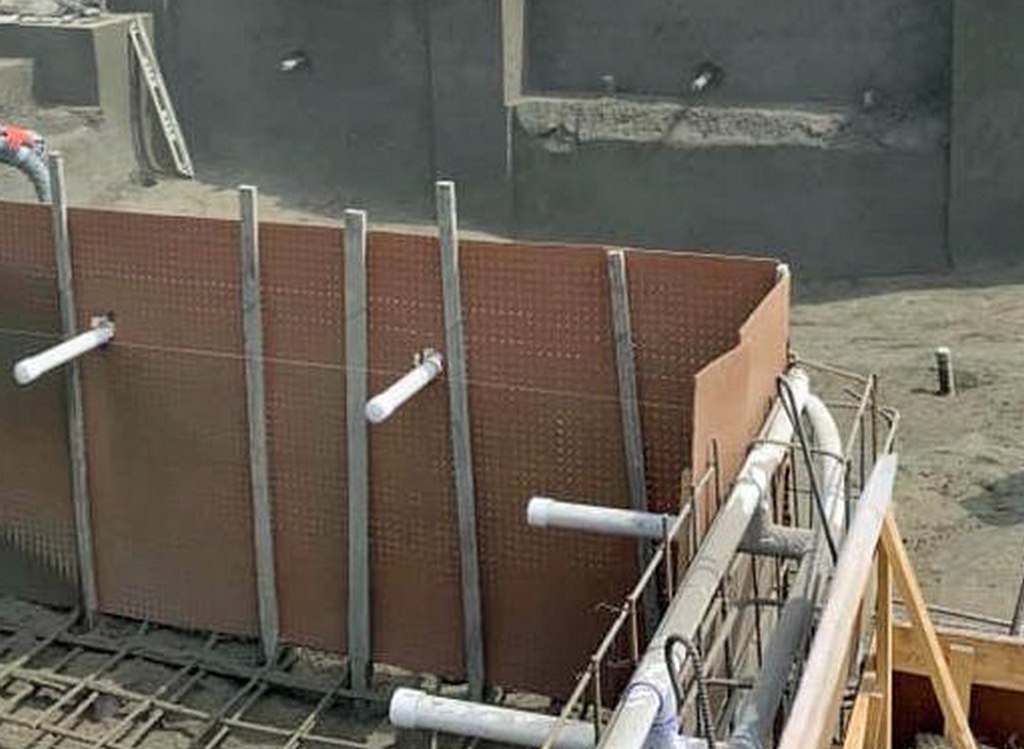 Also, because the forms are unsupported and insubstantial, as evidenced in the photos, they offer no resistance to vibration from the shotcrete process. Keep in mind that shotcrete hits the forms at approximately 80 miles per hour. That movement can result in voids as well as loose and porous areas. That heavy vibration leads to a range of potential problems including water intrusion, which in turn will lead to corrosion of the structural steel, not to mention cracks, leaks and ultimately complete structural failure.

Suffice it say, tying form boards to rebar is an extraordinarily terrible idea. If and when a project done this way winds up in court, this method is entirely indefensible.

Note: guidelines for concrete forms and shotcrete application can be found in ACI 318, Section 1908 Shotcrete.

The good news is the fix is simple and easy. The correct practice is to block the form boards off the steel with concrete blocks or rebar chairs. This way the wall can be shot full thickness the bars will be completely encapsulated and protected by concrete. The cold joint in the middle of the wall has been eliminated.

Doing it right costs very little and even saves time because you’re not shooting that disastrous second layer of shotcrete. It just doesn’t make any sense even from a timesaving perspective. 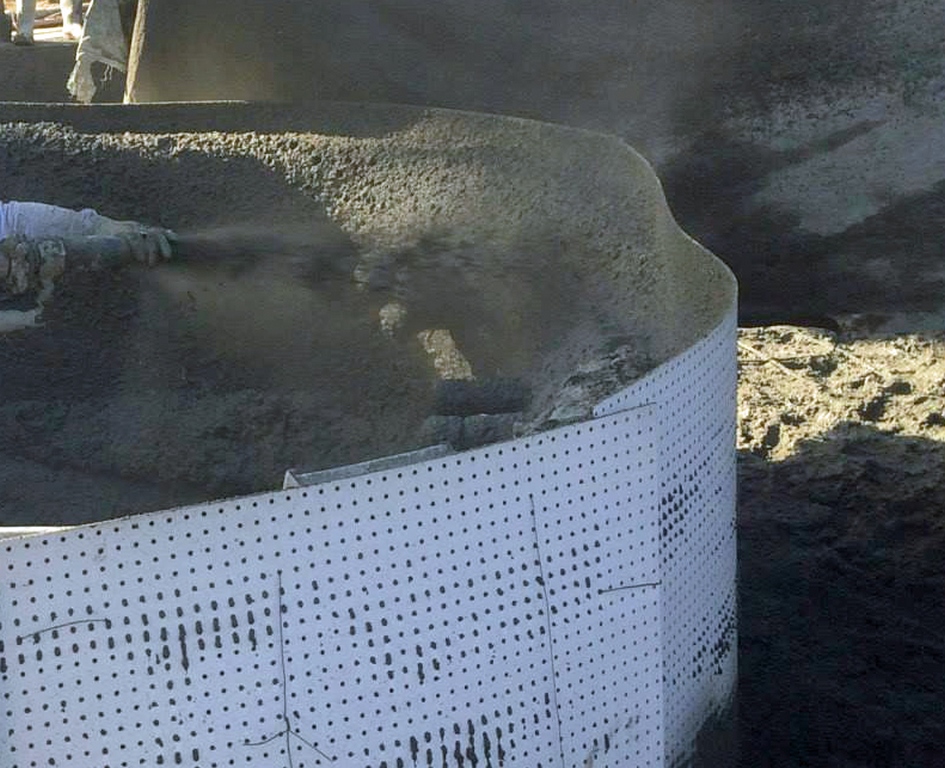 My advice is equally prosaic: stop being lazy and build proper form work! After all, it is the concrete that protects the rebar from the water and prevents corrosion. Don’t cheat the customer with these kinds of risky shortcuts and don’t expose yourself to the liability that comes with a failed installation.

In other words, first do no harm!

Paolo Benedetti founded Aquatic Technology in 1993. He is widely known for his creative designs and commitment to excellence in all aspects of watershape engineering and installation. He is constantly pushing the envelope and expanding his base of knowledge studying art, architecture and world history. He is an instructor for Watershape University and has been published in numerous magazine articles and online including coverage in the Wall Street Journal, USA Today, as well as CNN and HGTV.