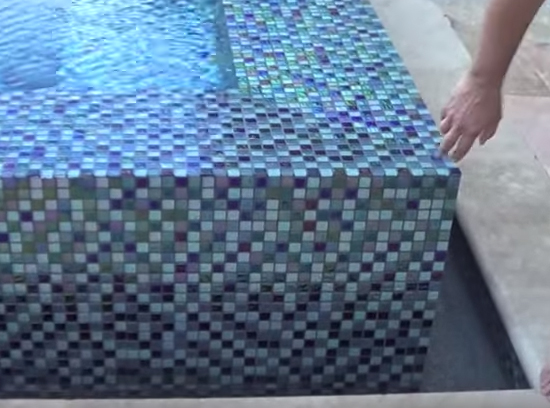 Once U.S. designers and builders “discovered” vanishing edges – probably at some point in the 1980s, although the look emerged long before then with some forward-thinking architects and watershapers – we’ve never let this highly visual design detail go.

I use these edge effects in my designs all the time, and setting them up in the best way possible has become almost second nature to me. (I say almost because I never want to start thinking I can take anything so critical for granted.) I am particularly proud of some of my work with what are commonly called perimeter-overflow spas such as the one illustrated in the video linked below.

Through the years, I’ve learned a thing of two about making these effects work, and the absolute Number One key is making certain the finished top edges are dead level within as tight a tolerance as possible. We work toward a thirty-second of an inch in a system such as this one: Our goal is to have a minimal but dead-even flow over the spa’s full perimeter – no dry spots!

If you want a surface such as this one to serve as a mirror of the sky while the system is running as well as when it’s off, you need that slow, dead-even flow. But if that’s your aim, you also need to make certain the water that returns to the spa to drive the effect doesn’t introduce any ripples or other surface disturbances that might disrupt the glassy top layer.

Finally, a word about glass tile: It’s wonderful material to work with and will perform brilliantly for years if the application process goes the way it should. In the video, I mention how smooth these finishes are and how much my clients like them, but to make that true you need to take care in finishing the edges of walls and seats and knock off any burrs or irregularities that might create a cutting edge. (And I wouldn’t advise a finger test: Another pass with a grinding wheel is certainly a better idea if you have any doubts!)

For reasons that are plain to the naked eye, a vanishing-edge/perimeter-overflow spa is a great addition to any project – especially when you have the opportunity to dress it up in beautiful tile. But you need to keep your professional eyes open as well: Every detail is critical, and getting all of them right is the surest path to a satisfied client.

To see a vanishing-edge/perimeter-overflow spa in action, click here.

Mike Farley is a landscape designer with more than 20 years of experience and is currently a designer/project manager for Claffey Pools in Southlake, Texas. A member of Genesis 3’s Society of Watershape Designers since 2012, he holds a degree in landscape architecture from Texas Tech University and has worked as a watershaper in both California and Texas.