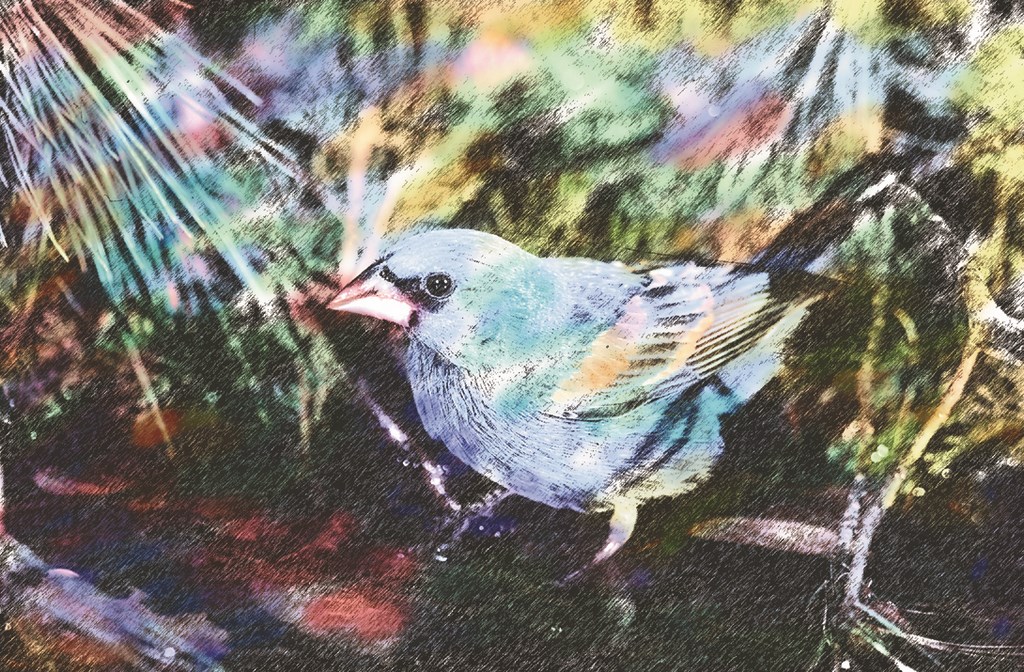 Just as few sounds blend so beautifully or evoke such sensations of peace and calm as the sweet tones of birds singing along with the relaxing music of moving water, I’d also have to say that few sights in nature delight the eye more than watching migrating robins queuing up for a bath, hummingbirds darting through a mist or a bold vireo “plunge bathing” in a rippling pool.

For most of my life, I’ve been inspired to observe the beauty and freedom of birds and am among those who have spent hours in the wild hoping to catch a glimpse of a Scarlet Tanager or to hear the song of the Hermit Thrush. From the beginning, I haven’t been able to help noticing that much of my very best bird watching takes place near creeks and streams, where the moving water attracts birds to bathe, drink and play.

Because it is always a joy to spot a variety of birds in one’s own backyard, it occurred to me that, by recreating these sorts of intimate moving-water experiences, I could draw birds to these settings and provide homeowners with countless opportunities to enjoy watching our winged friends, right up close.

To that end, we established Avian Aquatics in 1992 to provide custom backyard bird sanctuaries as well as a series of off-the-shelf streams, ponds, basins and misting systems designed with birds in mind. It’s a specialized niche to be sure, but the simple fact is that there are tens of millions of people in the United States alone who actively watch birds.

These “birders,” as they’re known, fall into two basic categories: those who travel to specific locations, sometimes over great distances, to see various bird species; and those who set up feeders, plantings and birdbaths designed to draw birds to their backyards. Serious birding enthusiasts, of course, do both.

My own exploration of birdbaths reaches back to 1972, when I built my first out of a concrete basin. Before long, I noticed that if I made the water move – at first in the form of a simple drip system I installed to reintroduce water lost to evaporation and splash-out – even the simplest of baths drew far greater numbers of birds, and in far greater variety.

I can now say conclusively and categorically that moving water is the key to attracting birds – perhaps three or four times as many as will be attracted by a static basin or conventional birdbath. And beyond the avian attractiveness, water movement keeps a system clean and fresh and dodges the old problem of birdbaths becoming little more than breeding grounds for mosquitoes. 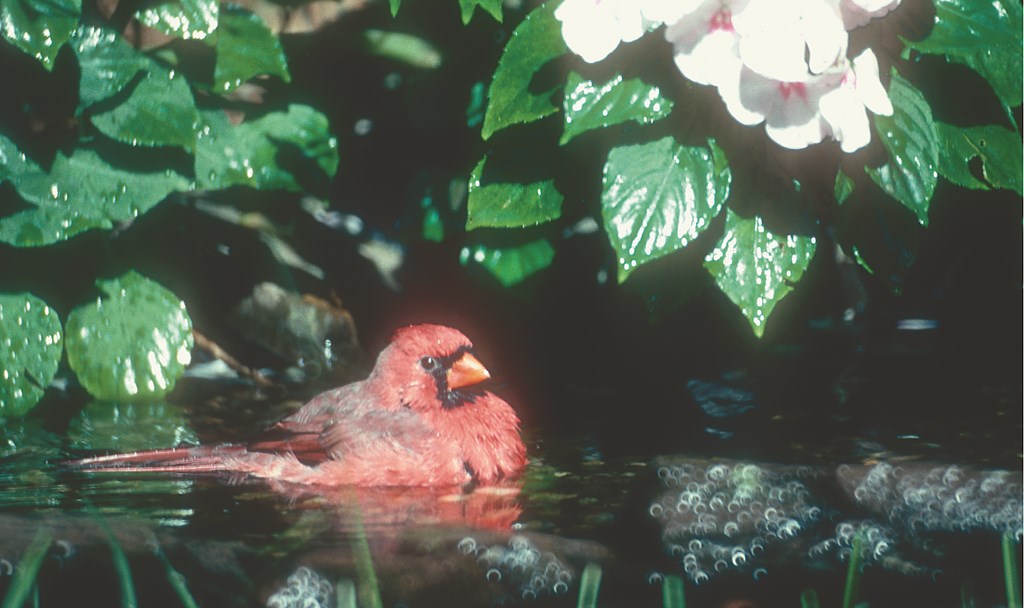 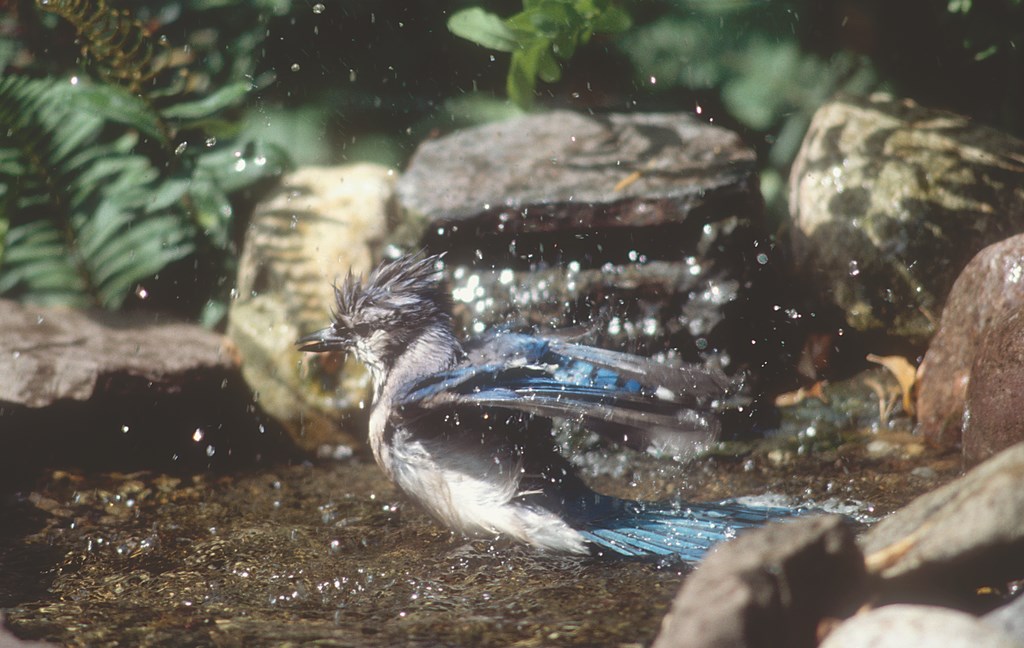 But there’s more to the story than moving water in the conventional sense: Through the years, I’ve also found that combinations of misters and plants work wonders when it comes to attracting small birds. This is the simplest imaginable form of “birdbath” and works by simulating a localized rain shower.

We set the misters up to wet the leaves of small trees or shrubs that can be set up in plain view. When set up alongside a basin or stream, the misted water will drip from the wet leaves into the bath, creating ripples that enhance the system’s visual appeal to people as well as its drawing power for birds.

The nuance of using mist to attract birds is just one of the many details I’ve observed and worked with through the years. In fact, I’ve always approached birdbath design with the sort of technical drive that defined my former work as a chemical engineer. That background, including an informed understanding of fluid dynamics and water chemistry, helped me in such tasks as designing overflow basins to create bodies of water that maintain the constant, shallow depth that’s so important for many species of birds.

If you spend even a brief amount of time watching birds interact with water, you’ll see a variety of complex and even surprising behaviors.

As is true of other animals, birds need to drink water and use it to cool off, sometimes sitting half-immersed for ten minutes at a time or more on a hot summer day. But what most non-birders are surprised by is the fact that birds are remarkably active creatures and thus appear playful as they bathe together in a stream or small cascade.

Hummingbirds, for example, love flying through fine mist, and small birds of all sorts love to “leaf bathe” by rubbing up against foliage wetted by a mister – a behavior that will often precede a visit to the birdbath (or what we call a “bird creek”). Birds’ bathing is in fact an essential part of maintaining healthy plumage. Often, you can observe birds after a bath, preening to realign their feathers.

Things can get pretty athletic in well-designed settings. Species such as vireos, for example, love to “plunge bathe,” a maneuver in which they fly down and break the water’s surface like a high diver and then quickly fly away, never touching bottom.

Bathing is also a social activity among some species, particularly Goldfinches and Cedar Waxwings: Often one bird will bathe, then two more, then four, then eight will gather in the water. Robins, curiously, are territorial bathers and will often queue up to bathe, with as many as 20 waiting in line for a turn.

Avian watershapes also have the delightful ability to offer easy viewing of hard-to-see species, such as tree-top-dwelling warblers, tanagers and vireos. Many birders tell me what a relief it is not to have to look straight up, for instance, to spot the elusive Blackpoll warbler.

While most any birdbath with moving water will work to some extent, we’ve found that more elaborate water systems attract a far greater number and variety of birds than do simple basins. As we’ve continued with our experimentation and observation, we’ve also found ways to maximize the attractiveness of our designs, both custom and kit form.

Beyond having some form of water movement, water depth tops the list of key design concerns. The ideal situation is a system with variable depths that include shallow areas of perhaps a half-inch depth for small species, with areas up to three inches deep for larger birds.

We also work with a range of flow rates through the systems, including parts with rapid flows a bit removed from areas with more tranquil waters. We’ve always been surprised to observe that even small birds will bathe in spots with what might appear to be an overwhelming flow rate – and that some larger birds will shy away from the fastest flows. 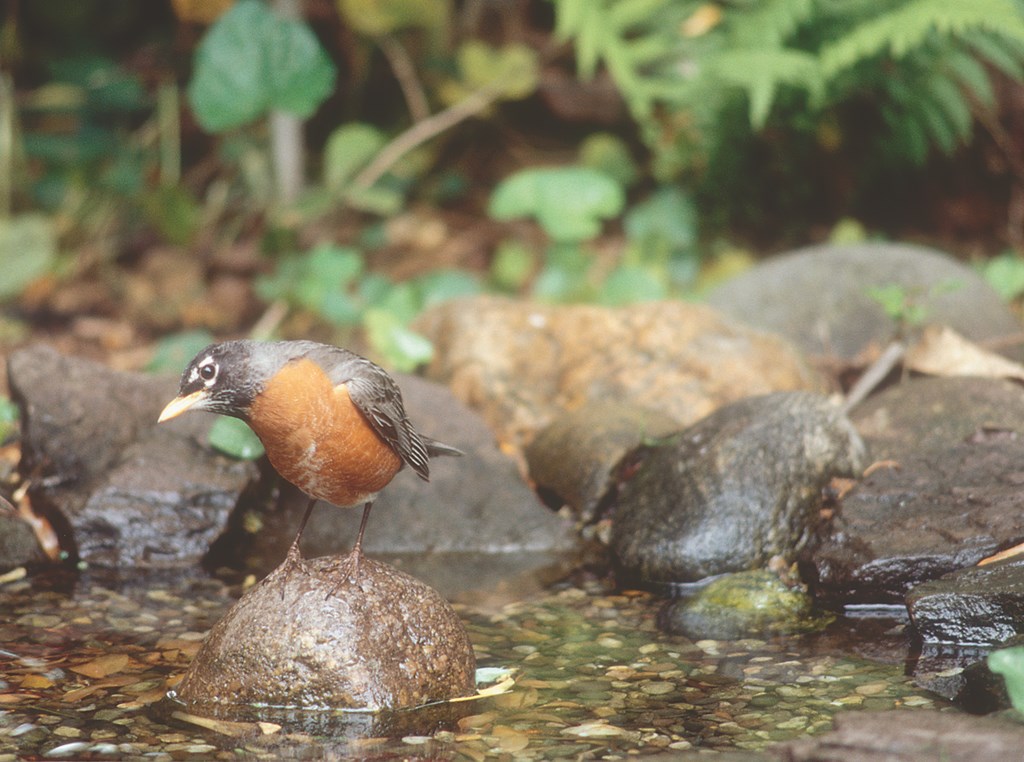 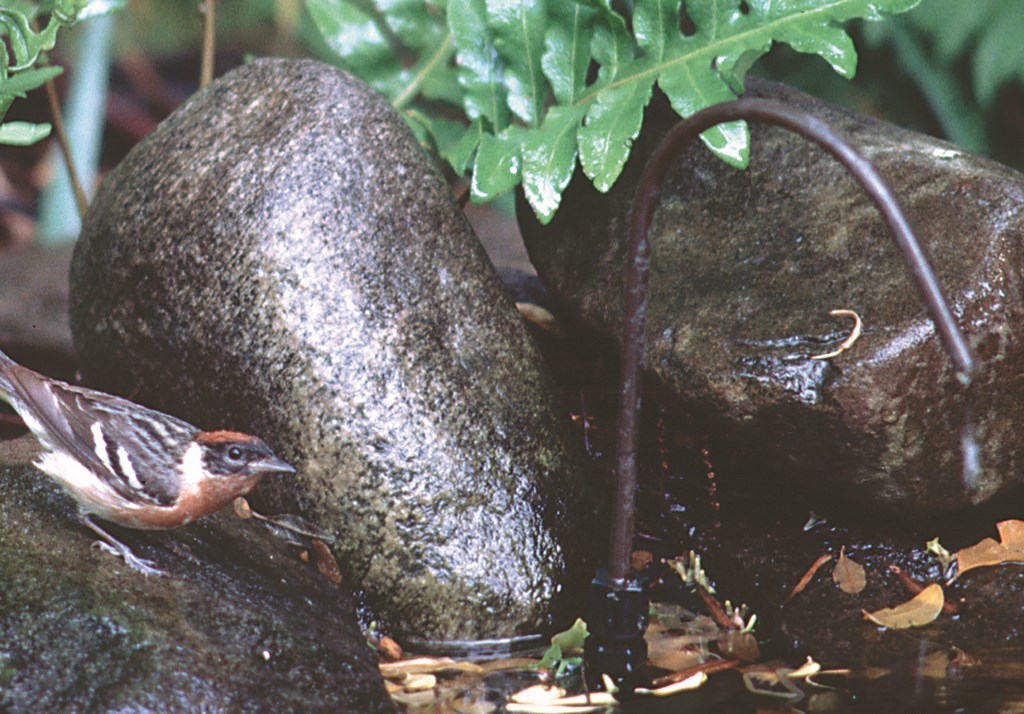 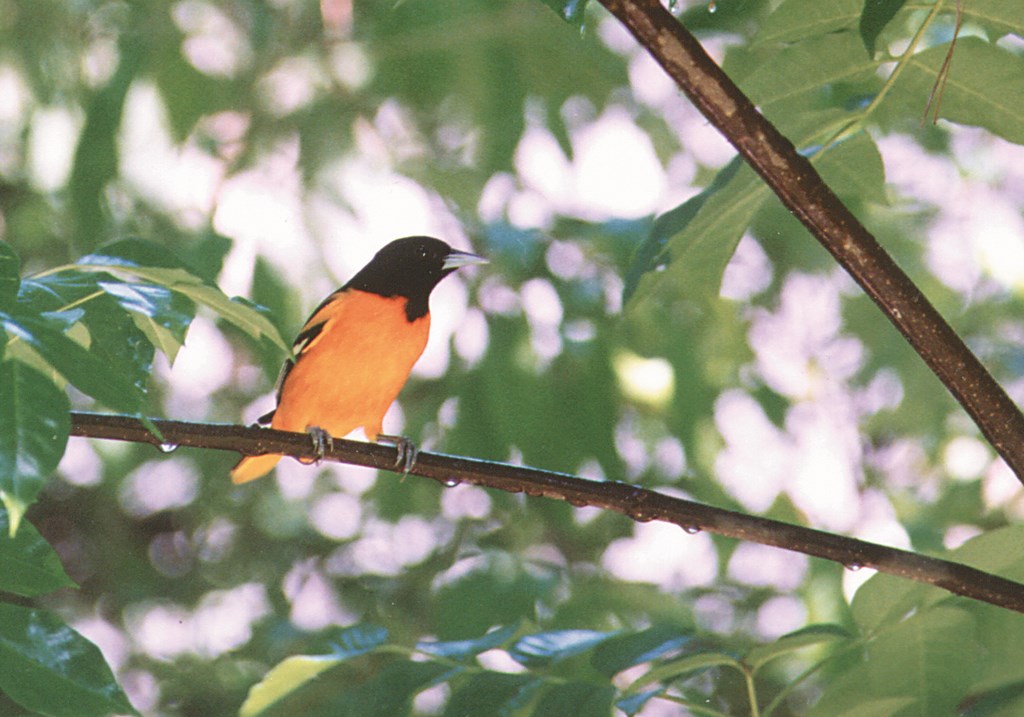 The rates we establish depend, of course, on the size of the system. Unlike ponds, where the recommend turn over rate is once every three to four hours, in our shallow bird creeks, the water is turned over as frequently as ten times each hour. This creates excellent oxygenation and enhanced water quality.

The cascades we build range from only a few inches to a foot or two in height. We’ve observed that larger waterfalls can discourage bird bathing, but again, we’ve often been surprised by how well even small birds fare in vigorous water. With respect to flow, we set up waterfalls with a minimum of 50 gallons per hour per inch of waterfall width; for more dramatic falls, we recommend flows in the range of 100 to 150 gallons per hour per inch. Either way, we focus on creating pleasant sounds.

Our systems tend to be quite simple hydraulically. We use energy-efficient, submersible pumps and locate them at the lowest spot in the system where they’re set up for easy servicing. They pump water through flexible tubing back to the headwaters. We also usually set up drip systems to compensate for water that’s lost to evaporation, splashed out or carried off on the plumage of bathing birds.

For larger systems, we set up biological filters – usually a gravel pit planted with shallow-water plants as a filtering bed. In these cases, we set up the pump beneath the gravel bed to draw water through the plants’ root systems, which absorb nutrients and organic material. We protect the pump with a perforated mesh cover surmounted by gravel.

Finally, footing is critical to birds’ ability to interact with the water. Pretty as they can be, for example, we’ve found that medium-sized pebbles (one- or two-inch diameters) are a problem because they create crevices that can trap birds’ feet. But natural rock – or a surface that is close in texture to natural rock – is optimal, so we provide broad, flat surfaces of materials such as pea gravel at the water’s edge to ensure good footing. We also use larger rocks for edge treatments.

Many bird species are gregarious by nature, and we’ve found that yards with multiple watershapes designed with birds in mind will draw the largest numbers. Combining misters with foliage overhanging a creek, for example, or placing several small drip basins near a feeder (but not so close that seed hulls will fall in the water) will both beautify a space and make it extremely welcoming to avian visitors. And it doesn’t need to be all about birds. Large ponds and streams, for example, can be set up with just one or two areas dedicated to luring birds. And smaller spaces can be decorated with small, soothing watershapes that double as birdbaths.

However you shape it, it’s time to consider that the ability to attract birds is another of the many qualities of the basic materials with which all watershapers work – and another way for us all to delight our clients and enhance their enjoyment of their backyards.

And if some flying friends enjoy it, too, well, who’s complaining?

Bill Fintel is founder and president of Avian Aquatics, a Milton, Del.-based supplier of watershape systems and supplies designed to attract wild birds. A career chemical engineer with Dupont, Fintel founded Avian Aquatics in 1992 after spending years as a bird watcher. The firm offers off-the-shelf birdbath systems and a series of kits, and Fintel has also worked closely with landscape architects and designers in setting up custom stream and pond installations across the United States – all designed to attract birds. In addition, he frequently conducts field trips and birding classes for local groups.