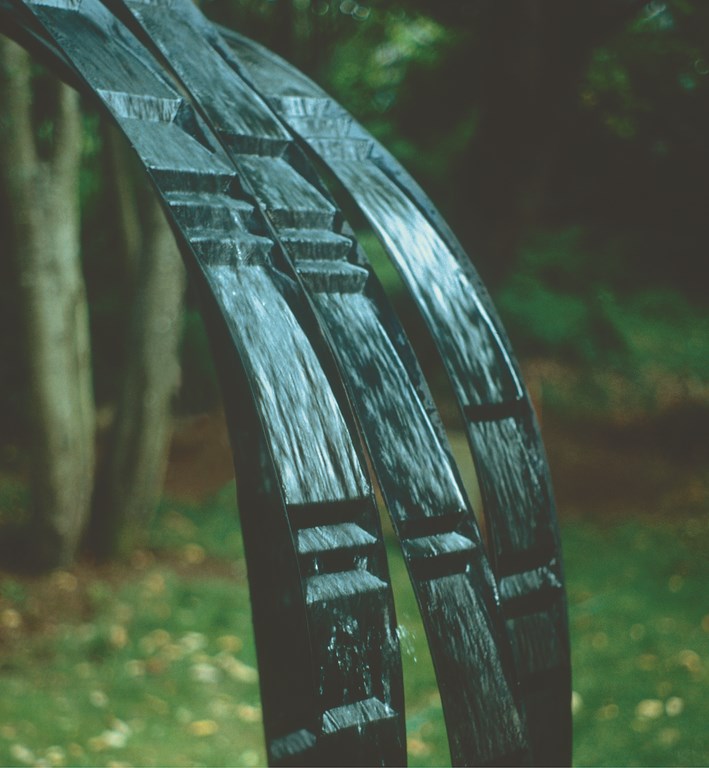 To me as a sculptor, differing water flows and their textures are like “colors” to a painter: I find a color that holds meaning for me and then look for a structural form that can present it. To this extent, my artistic medium is the behavior of water and the means to make it behave. The sculpture in this case is water combined with a structure in steel, stone and equipment.

The work is abstract: abstractions of feelings related to the movement of people, animals, fish and the flows of water in streams, rivers, rain – even the flow of numbers. As a result, I need metaphors and feelings to drive my creative expressions, then use water and other sculptural elements in much the same way a choreographer might use line and gesture to express a feeling or a composer will use chord changes and musical phrasing.

My hope is that, in creating forms that are meaningful to me, other people will have similar thoughts and feelings as they view my work. There are no guarantees, but I work hard to get my point across.

Water is indeed a wonderful medium, but to be honest, the machinery needed to realize sculptures with water is not very flexible – and it’s certainly not the easiest to work with in comparison to, say, chalk, acrylic or pencil on paper, all of which are very direct. Instead, working with water requires many interim stages between the initial idea and the final expression.

The work starts out with a sketch and then the hard work begins. This process of taking drawings and translating them to real works of water and glass or bronze requires a tremendous amount of technical development and testing. The main challenge is to make the result feel as fresh as the original drawing. If I feel I have succeeded, it is because the idea is clear to the observer and the means I’ve used to express it remain transparent.

One of the best things about working with water is that it offers varying levels of participation for the observer, so I’m constantly imagining the way people will interact with the work as part of the design process. For example, pieces are often designed with the idea that children will play in the water. To be sure, it is the rare child who will appreciate the artistic or poetic subtleties of an artwork; conversely, I know that adults who are best able to appreciate the meaning of a work won’t tend to have much interest in playing in the water.

Designing for both play and art appreciation requires that I keep both of these distinct viewpoints in mind. Most artwork isn’t overtly designed for such dual purposes. In a piece with moving water, it’s reasonable to expect people to approach and touch the water – a tactile level of participation. But they could just as easily stand back and consider it purely as expression of an artistic/visual idea.

There is, however, a synergy between those forms of participation in that water almost always attracts attention and that, in a very real sense, the presence of water in a sculpture invites people to come close enough to the piece to touch it. As an artist, I love that potential and work with it whenever and wherever I can.

This experience is very different from what happens when sculpture is seen in a gallery. When I see a beautifully carved piece of stone, for example, I want to touch it – and resent the fact that most of the time I’m not allowed to do so. I understand the reasons why, of course, but there’s no doubt that prohibiting the tactile experience limits the experience one has with a work of art.

In many ways, this is a line that architects often walk: There’s an aesthetic/design mission they must carry out, but they also have to keep people dry when it rains. To succeed, their work has to function on two levels, as an art experience and as a life experience.

Oil paintings on canvas do not provide that dual experience, nor does photography, nor do many other kinds of sculpture. But sculpture with water does, and this adds a dimension I find enormously challenging and fascinating.

There’s no mistaking the fact that what I do with water involves both aesthetic and technical complexities, which is why I always try to find the simplest possible means of expression. (To paraphrase Picasso, “If you have four colors, use three.”) My belief in this principle has remained constant through the years, although I have sometimes had to fight my own fascination with the beauty of technically complex systems. But for any observer, the personality of a bird comes before the science of the bird.

From time to time I have been able to substitute a simpler method after revisiting a technique, and the entire design process becomes more refined – and more pleasurable to me. For this reason, I have little interest in excessive embellishment and am of the mind that the most challenging thing is to find a clear melody: For all its ornamentation, a symphony can still use a simple melody as a point of departure.

Birds on a Wire

Completed in 1995, this project for the Oregon Museum of Science & Industry began with an investigation of the classic bamboo Japanese garden Deer Chaser- and resulted in a composition of different-sized water-pouring wands that move in differing directions with a widely varying syncopation.

It occurred to me early on that the rhythm I was considering was reminiscent of the actions of a gathering of birds on a telephone wire – a community of individuals acting in concert. This became the poetic idea that bound the concept. 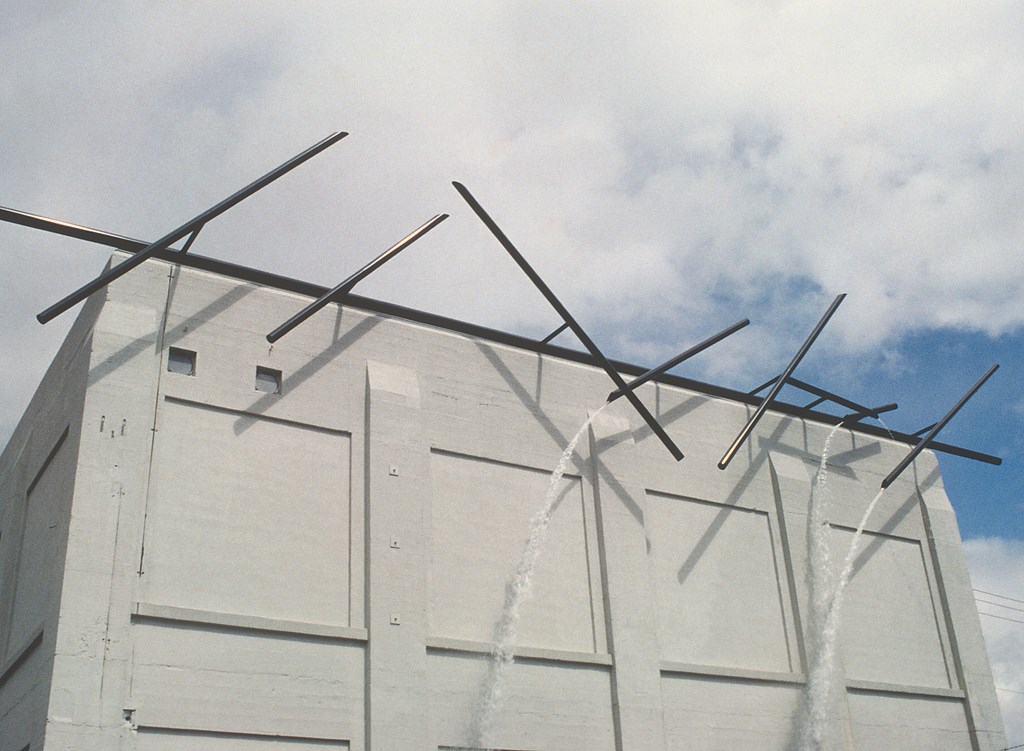 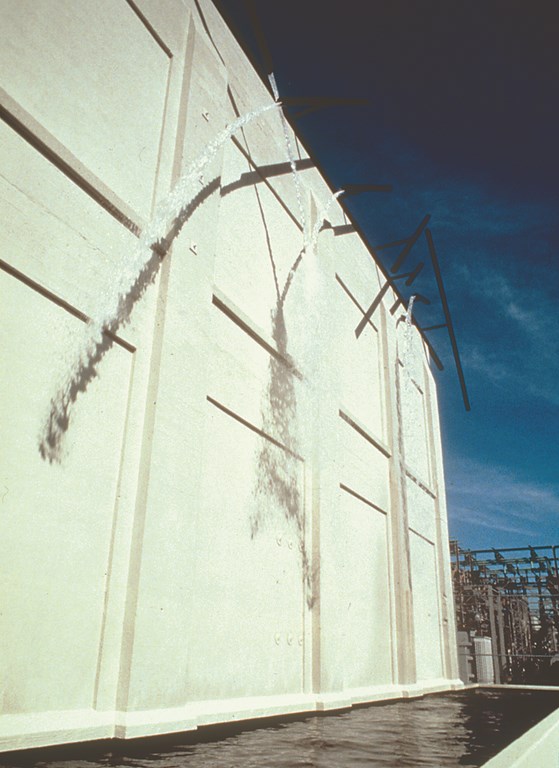 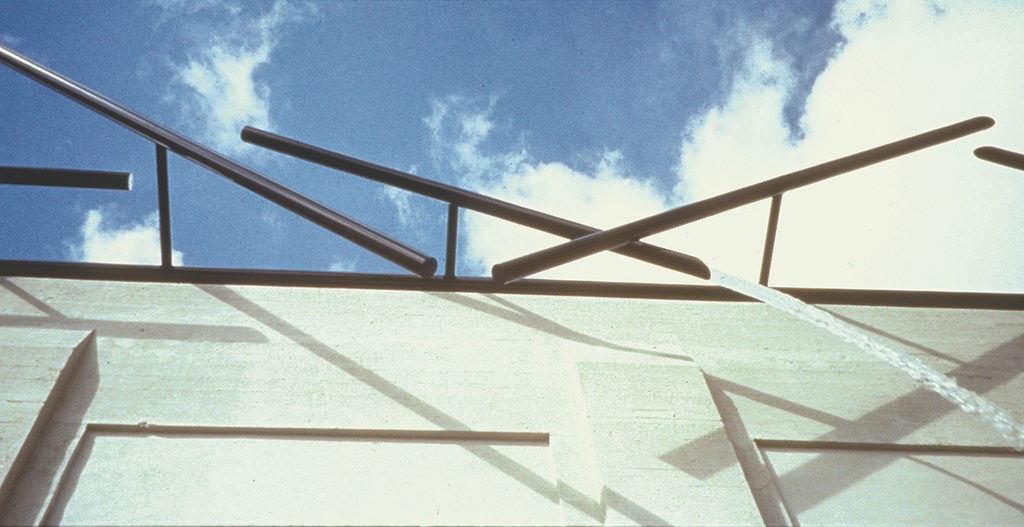 Seven choreographed performances were programmed into a stand-alone computer. These performances range from what appear to be random action to synchronized dances. And for the fun of it, within one of them is a sequence that determines that two opposing pours will intersect and clash in midair.

This is the most complex design I’ve executed. Although each wand is self-motivated, all are assisted by the computer system. The performances mentioned above override and regulate movements, but these performances can be disengaged, and the entire system will settle into its own rhythm.

Measured amounts of water are delivered to the pipes through swivel fittings: The wands begin to fill and soon overturn to pour approximately 10 gallons of water in pure and clean streams that flow down 35 feet to a collection basin. Once a limiting point is reached, pneumatically effected lever arms attached to the wands dampen their movement in both directions to guarantee smooth and graceful motion. 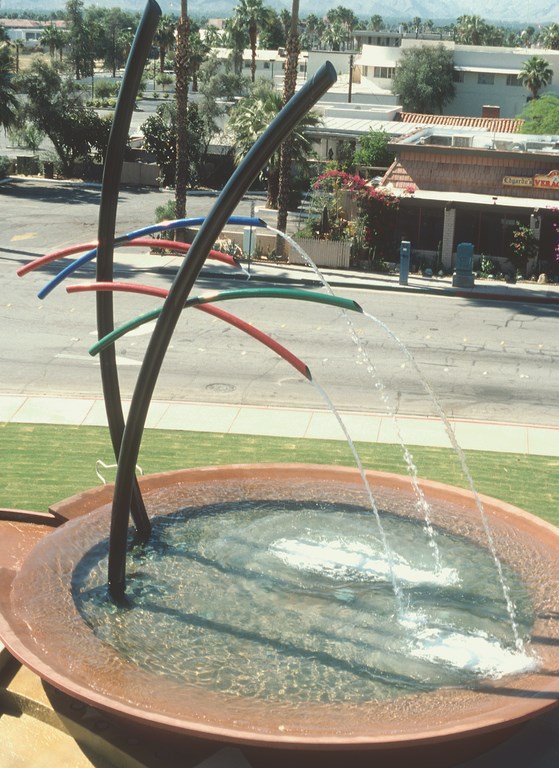 This is an example of a mechanical refinement: The motion of the wands in this composition, which was installed in 2000, is free of external controls as a result of careful engineering that simplified the design while allowing the coupled wands to find their own rhythm.

This piece is meant to convey a temporal action embedded within all time. In this case, the glass shape derives from the double looped infinity symbol. 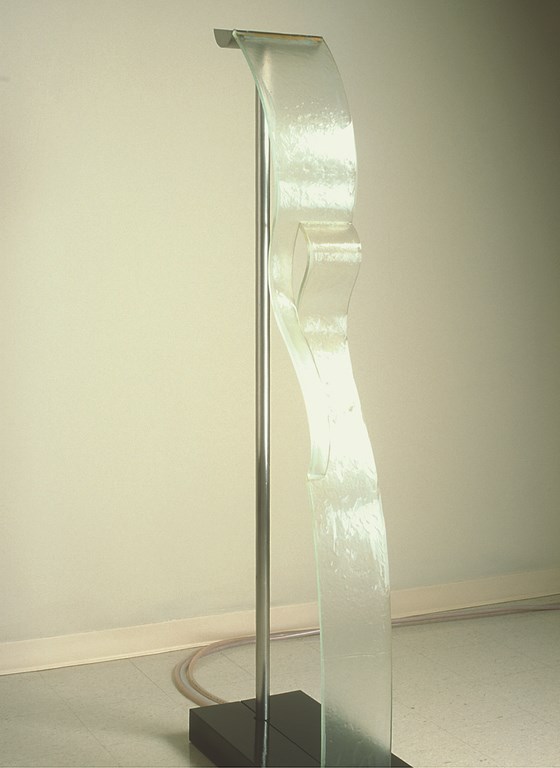 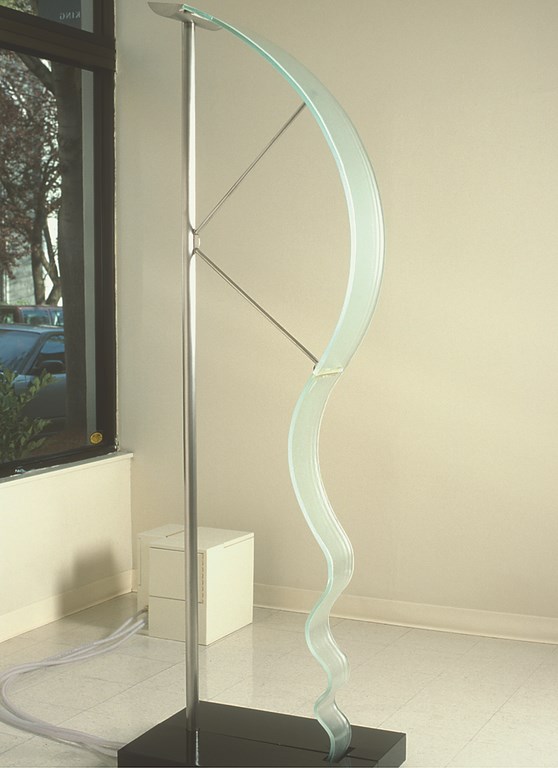 Clear crystal glass was formed to suggest the cresting of a wave, but by contrast, the water sheet takes its own sweet time.

The structure of aquatic grasses and the notion of rain pouring to their roots led to this composition. The V-shaped grass sections lend strength and flexibility while giving the water natural troughs through which to flow. The visual-design challenge centered on the rhythm of interruptions in the form of hurdles for the water within the troughs, as well as the arrangement of the “grass blades.” 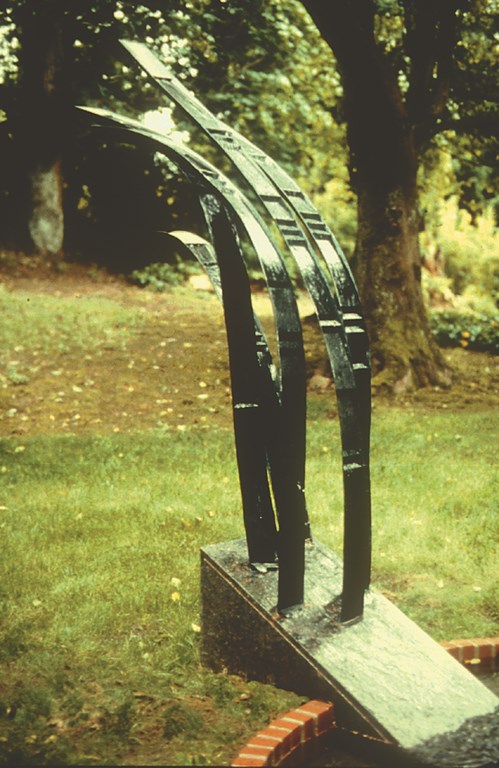 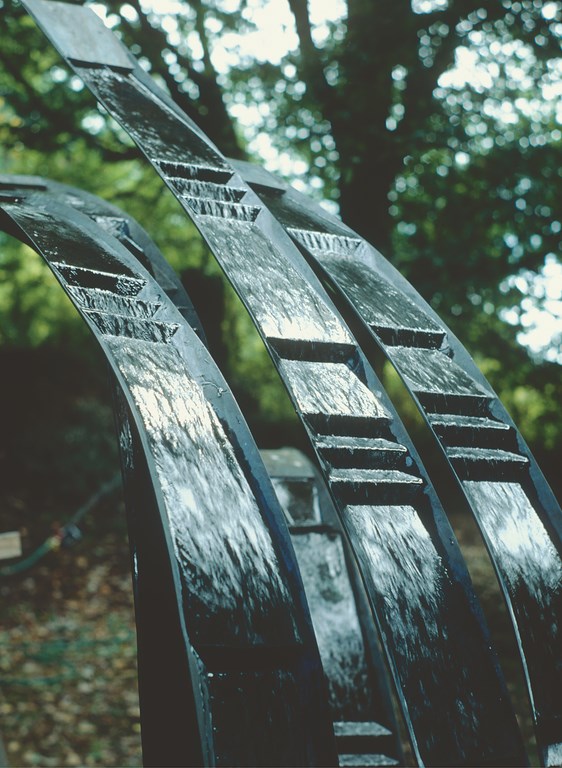 The design process began with waterproofed cardboard mockups to assess water behavior and was followed by a fine-tuned plastic version. Taken to a foundry, a bronze casting was made through a loss-plastic-investment casting method. Within each hollow casting is a copper pipe that delivers the recycled water reliably to a top weir in each frond.

The title of this 1989 work came from the person who commissioned it, Willoughby Bishop. She has a large garden on Vashon Island in Washington, within which is a place for healing and meditation.

Peacocks I and II 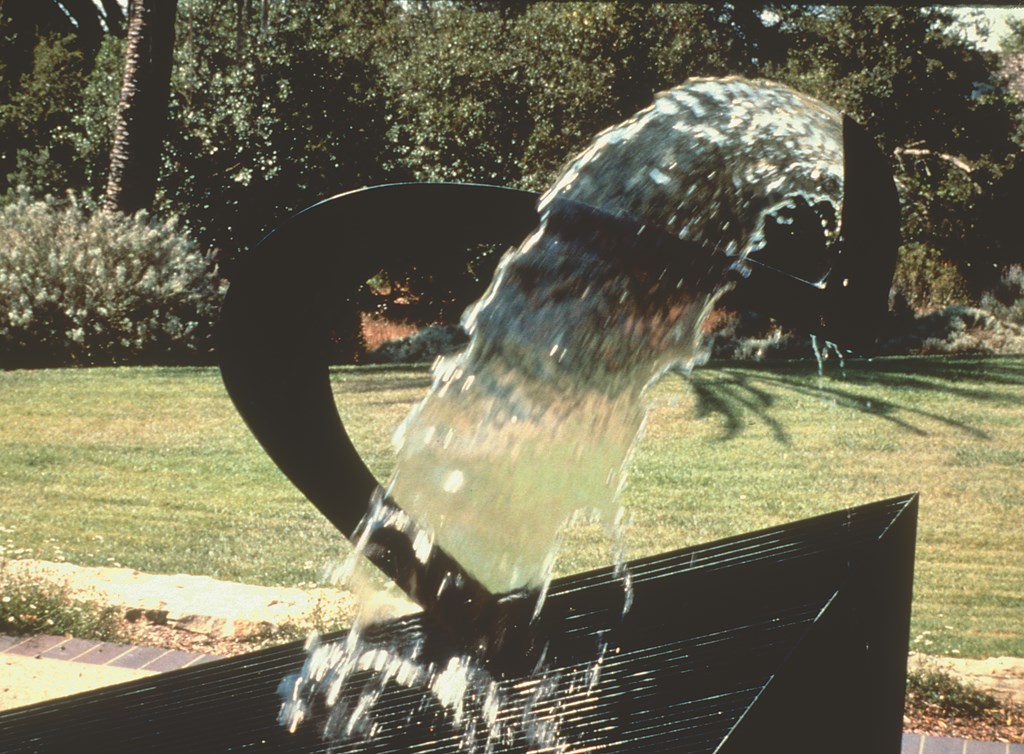 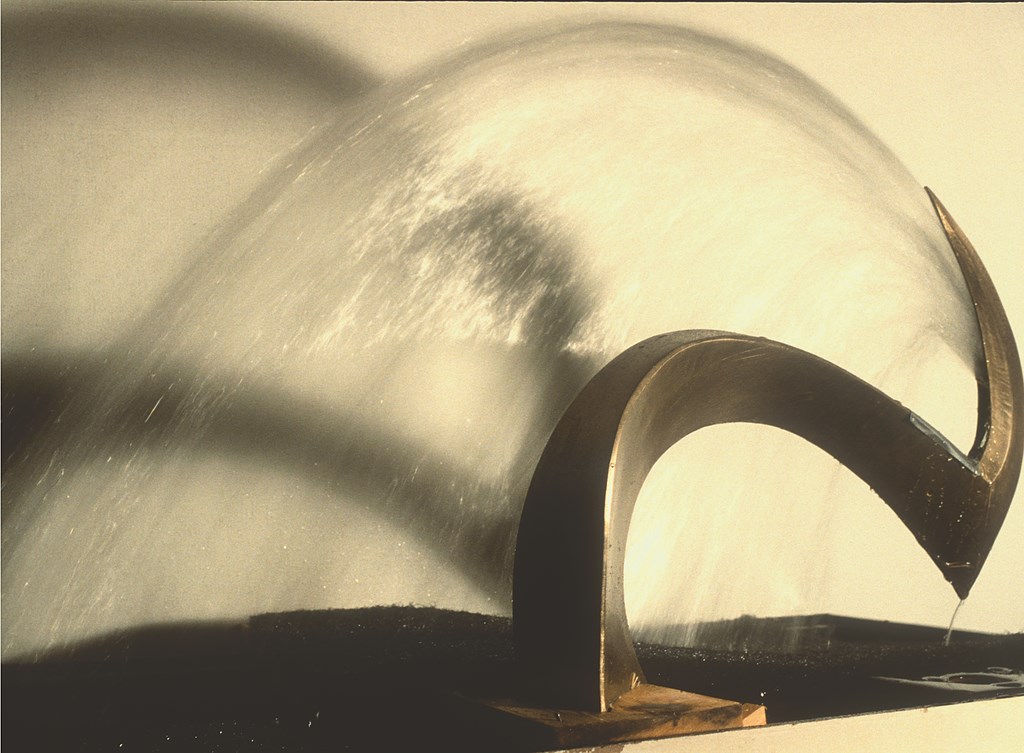 Here are two pieces with contrasting water qualities – one a ragged vertical curtain (as shown in a gallery), the other a clear vertical window (as installed in a garden in Santa Barbara, Calif., in 1992).

David Curt Morris is a sculptor based in New York. He earned his master’s degree in architecture from the Massachusetts Institute of Technology in 1972 and was a fellow at the Center for Advanced Visual Studies at MIT from 1972 to 1973. His architecture and design résumé includes work with Lawrence Halprin Landscape Architects, Marcel Breuer Architects and Skidmore, Owings & Merrill, among others. He has taught in the School of Visual Arts at New York University in the University of Illinois’ Department of Art and Architecture. Morris’ sculpting career encompasses a variety of significant commissions as well as exhibitions staged throughout the United States. His current works in development include variations on the Rainmaker concept that can be run in line with swimming-pool equipment.