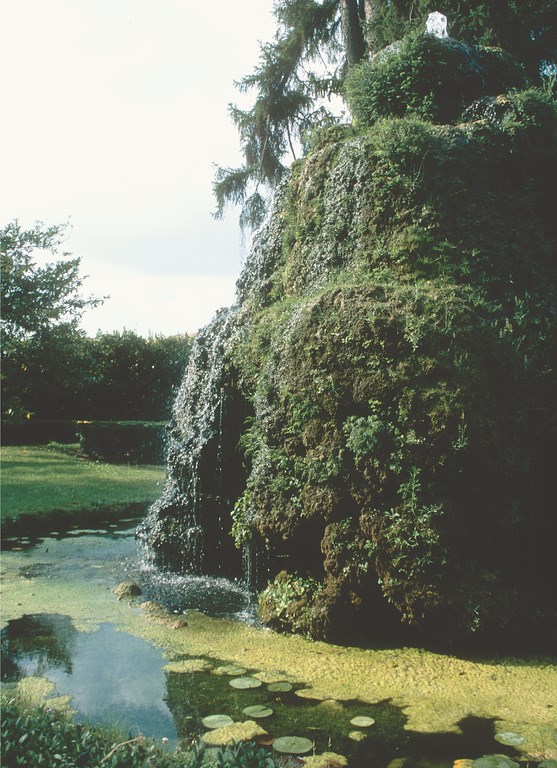 We’ve all heard and read how important it is to study the achievements of our predecessors in watershape design and engineering. Indeed, exploring these historic works is vital for the role it plays in emboldening our sense of artistic tradition and inspiring our creativity by offering rich galleries of design ideas.

When considering Villa d’Este in such light – its extraordinary architecture, otherworldly gardens and daring watershape designs – it’s easy to see why this grand estate is so important to us now. It’s widely considered to be the most significant residence surviving from the Renaissance and has every right to claim to be the most beautiful and influential as well.

Surely there’s no substitute for traveling there and lingering with eyes wide open, but even from afar, we can and should turn to this amazing estate as a source of artistic inspiration and, in many respects, as a technical blueprint.

These days, most of us are more familiar with Bellagio than we are with Villa d’Este, upon which the spectacular Las Vegas hotel was patterned. Even with its posh appointments and remarkable dancing waters and spectacular technical achievements, however, I’d argue that the modern replica doesn’t come close to the original in beauty, grandeur or technological innovation.

Nestled in rolling terrain near the shores of Lake Como and in the town of Tivoli – about 20 miles east of Rome – Villa d’Este is one of several Italian villas that have survived from the 16th Century. Like a great opera, the villa is vast and multifaceted, with seemingly endless variations on its key themes and voices.

At every turn, it challenges us to plumb its depths and learn what we can of its structure and complexity, from its sweeping axial geometry to its pinpoint details and stimulating narrative program. In these surroundings, we find a living, historic palette of ideas and stories related to us in three dimensions.

The design and construction of Villa d’Este stretched from roughly 1550 to 1572, the product of a glorious collaboration between its owner, Cardinal Ippolito d’Este, and the renowned historian and architect, Pirro Ligorio. During its long history, the villa has seemingly grown only more beautiful and compelling.

One reason for its enduring appeal and influence is that the property is among the most complex design achievements in all of Renaissance architecture. Ligorio’s antiquarian tastes and affection for Roman myth and culture infuse the entire estate, from the frescoes adorning the interior walls with tales of Hercules and Neptune and other mythological figures to the elaborate statuary and watershapes that infuse the exterior spaces with echoes of those same heroic themes.

The exterior spaces are lush and green and wild, but the estate is also set up on an elaborate axial grid that connects the garden spaces to the world beyond the estate’s perimeter. Direct lines run from the garden to landmarks in Tivoli, for example, and precise “force” lines can be drawn from the villa’s core that pass through its major watershapes to terminal points at ancient archeological sites in neighboring hills and towns where Ligorio unearthed much of the statuary with which he graced the grounds.

This linking of environments by way of visual motifs and spatial relationships is a prime lesson of Villa d’Este – a set of principles we can apply with most of the situations and design modes we use. The work with landforms and topography is also exceptional, from the elegant stairways (both dry and wet) connecting upper and lower terraces to the ingenious use of viewpoint, perspective and layering of views to make the gardens a visual feast for visitors.

A PASSION FOR WATER

The feasting is enhanced, of course, by the beautiful fountains and watershapes that dot the grounds. Not only are they remarkable for their detail and sheer beauty, they also represent an amazing engineering achievement when you consider that the villa’s waterworks – and 500 fountains in all – were originally run by head pressure generated by a system of cisterns and aqueducts.

To my mind, this single factor, this astonishing level of hydraulic sophistication and application, puts Villa d’Este in a league with such marvels as the baroque gardens of Versailles in France and the Moorish complex of waterworks at Generalife in Spain.

Villa d’Este sits atop a small hill in the town of Tivoli, which for centuries has been one of Italy’s most obvious enclaves for the affluent. Here Ligorio, far better known as an antiquarian and historian than as an architect, created one of the Italian Renaissance’s greatest artistic achievements in collaboration with Cardinal d’Este, scion of a powerful and influential family.

The cardinal brought Ligorio to Tivoli to transform an existing monastery into a summer villa. Steeped in Roman mythology and culture, Ligorio vested the work with an explosion of literary allusions and classic design elements. He himself led archeological expeditions to the surrounding hills to unearth the Roman statuary and antiquities to be incorporated into the design throughout the estate, inside and out.

When it came to the watershapes, however, Ligorio brought in an expert, Thomaso Chiruchi, widely reputed to be the best hydraulic engineer of his day. Working within a scheme that called for the most dramatic water effects possible, Chiruchi delivered in truly grand style.

The site was challenging, with severe grade changes and the rigid geometry of the site plan. The water source was the River Aniene, which Chiruchi diverted and channeled into a vast hydraulic network that fueled effects that would be difficult to achieve even using modern pumps and valves. Nothing was wasted: Water would be used for a watershape on one level, and then channeled to one or more watershapes at lower levels to create even more effects before the water passed into Lake Como.

Every one of the major watershapes fits into a complicated gridwork focused on a central watershape known the Dragon Fountain. We’ll begin our tour of the grounds with this hub.

The Dragon Fountain is situated just below the main house and serves as the Villa d’Este’s central hub. It tells the story of Hercules, patron deity of Tivoli, who slew a multi-headed dragon as one of his heroic exploits. The dragon serves as the fountain’s centerpiece amid a large oval basin cut into the slope. This allows visitors to come in close proximity to the fountain on several levels as they descend a staircase that wraps around the pool’s perimeter. (Photos by Phil Pregill, California Polytechnic University, Pomona, Calif., and Sharon Lewis, Manhattan Beach, Calif.)

The Alley of a Hundred Fountains

This famous colonnade of fountains connects two major elements of the garden: the Rometta and the Oval Fountain. The Rometta symbolizes Rome, while the Oval Fountain represents Tivoli, making the alley a metaphor for the journey between the two places. 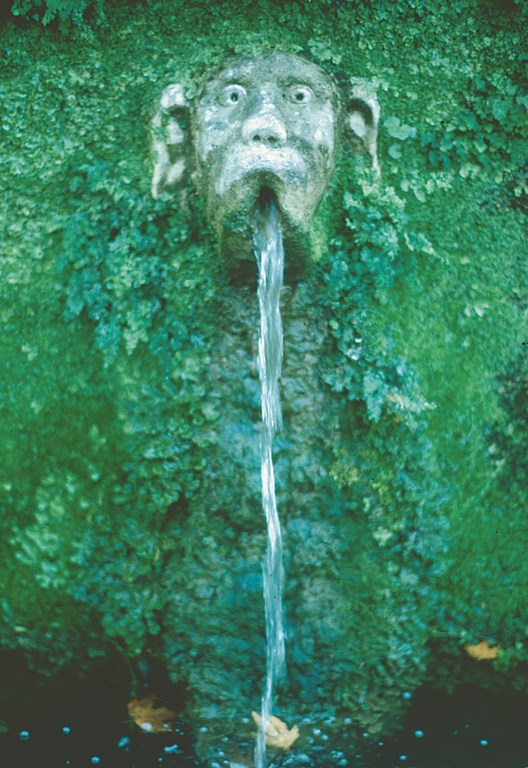 The many statuary faces emit even streams of water, serving as evidence of Chiruchi’s precise control of flow over considerable distances.

Surrounded by stone structures that call to mind many of the Eternal City’s most famous and familiar structures, the Rometta capsulizes the glory, honor and history of Rome in a whimsical way. 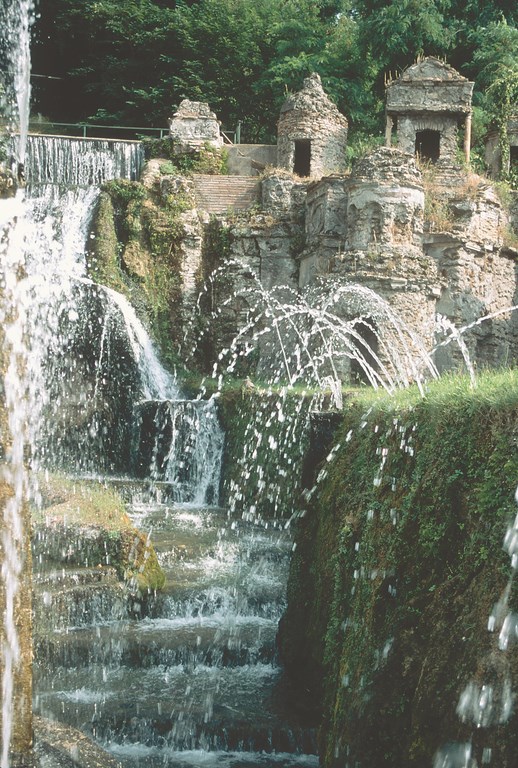 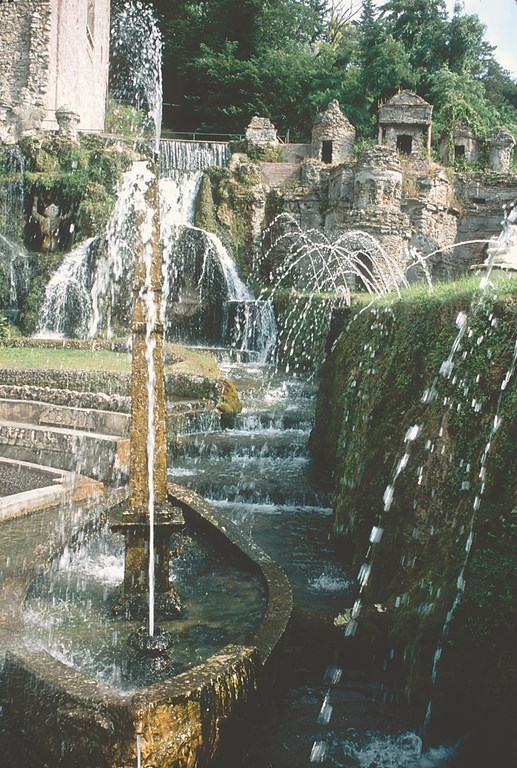 Figurines and statues take up positions within a criss-crossing watershape and focus on the Rometta’s stone obelisk and a boat meant to symbolize a boat-shaped island in the Tiber River just outside Rome.

Where the Rometta shows the power and passion of Rome, the Oval Fountain (or the Fountain of Arethusa, as it’s also known) captures all of Tivoli’s subtle and sensual elegance. 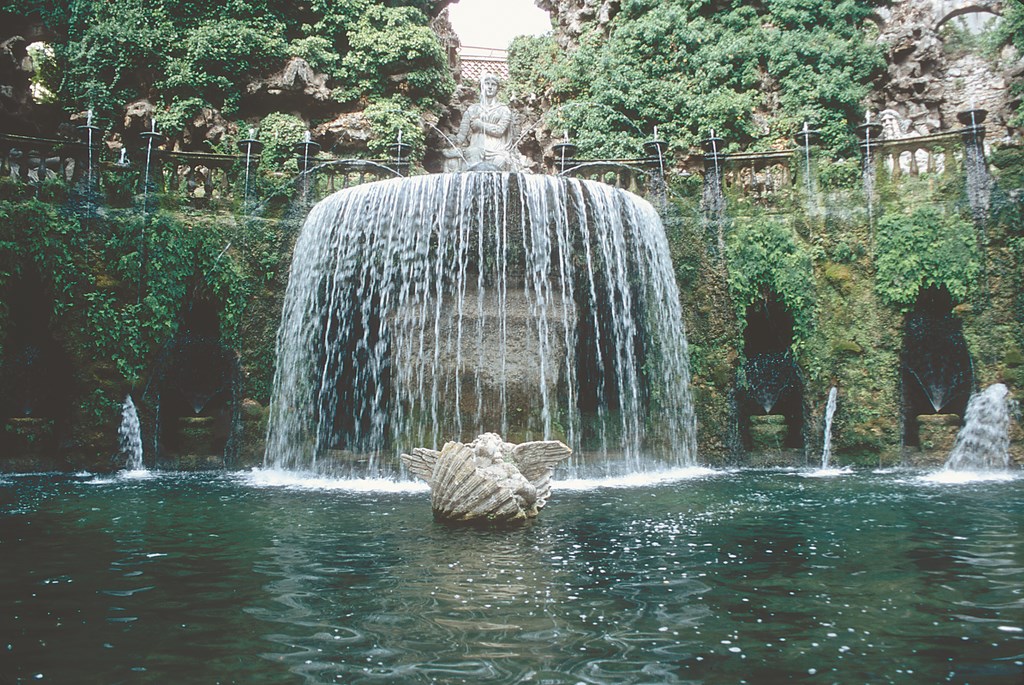 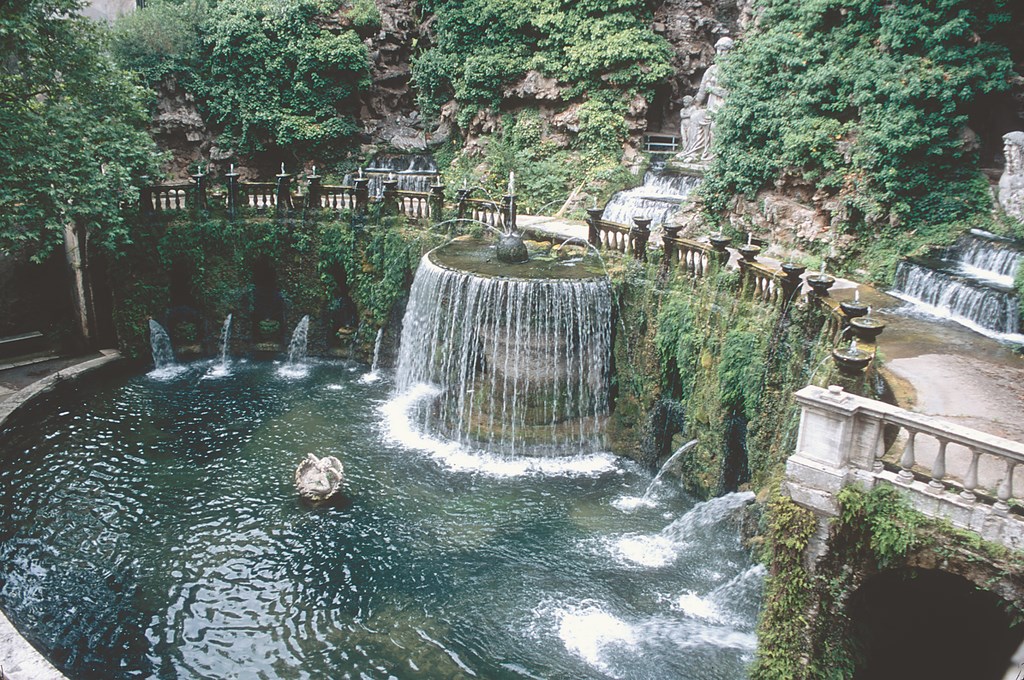 The organic backdrop and the simple flows of water offer a dramatic contrast to the Rometta’s erratic spouts.

This feature stands as one the Renaissance’s (and all of history’s) most original watershapes. Claude Venard of Burgundy, an extraordinary manufacturer of pipe organs, helped Chiruchi execute Ligorio’s vision: Special pipes were built to create various organ-like sounds that resonated throughout the entire garden. 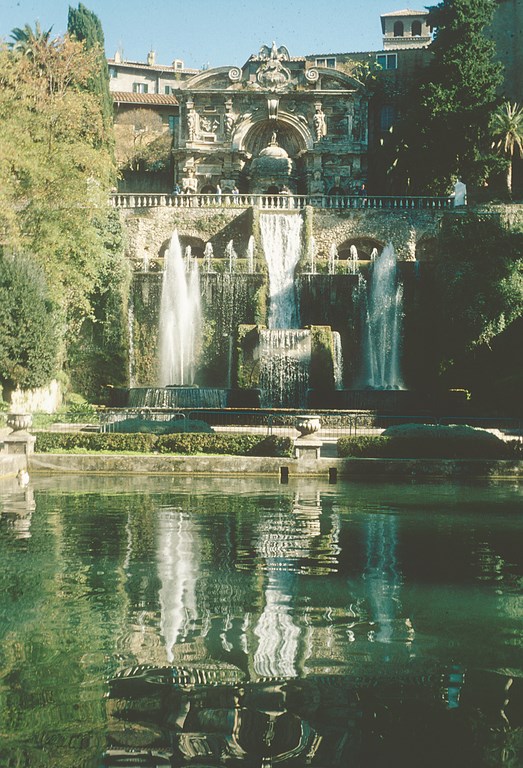 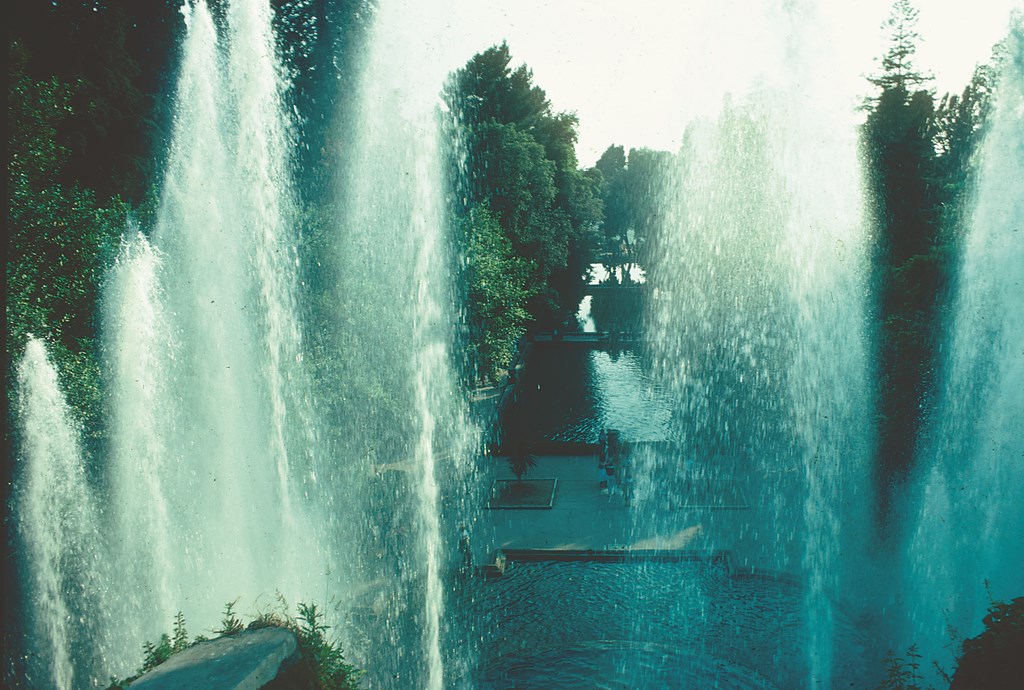 The centerpiece statue has been moved and the pipes are no longer tuneful, but the organ was once the “auditory” center of the villa’s gardens.

The Fountain of the Owl

Given its name for the owl-like sounds that emanated from a pipe system similar to that of the Water Organ, this watershape is set slightly out of the way of main traffic patterns and is further isolated by walls that give it a courtyard-like setting. 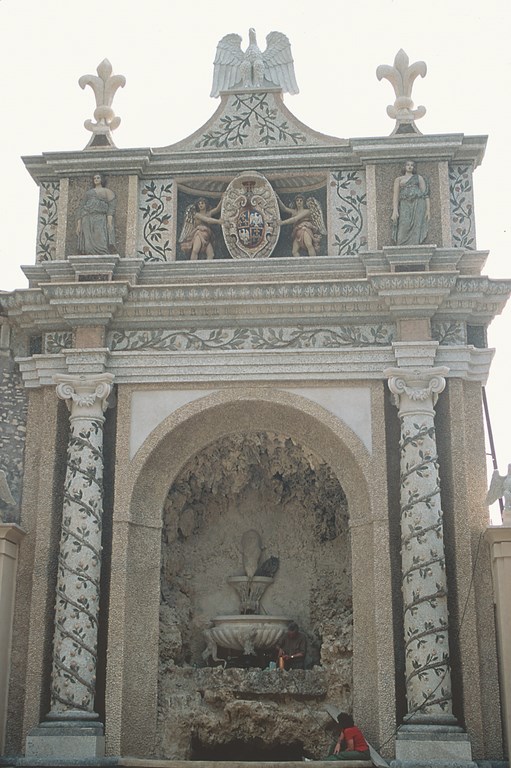 The columns on either side of the centerpiece feature hand-carved vines and various other plant materials and birds created by the Renaissance artisans.